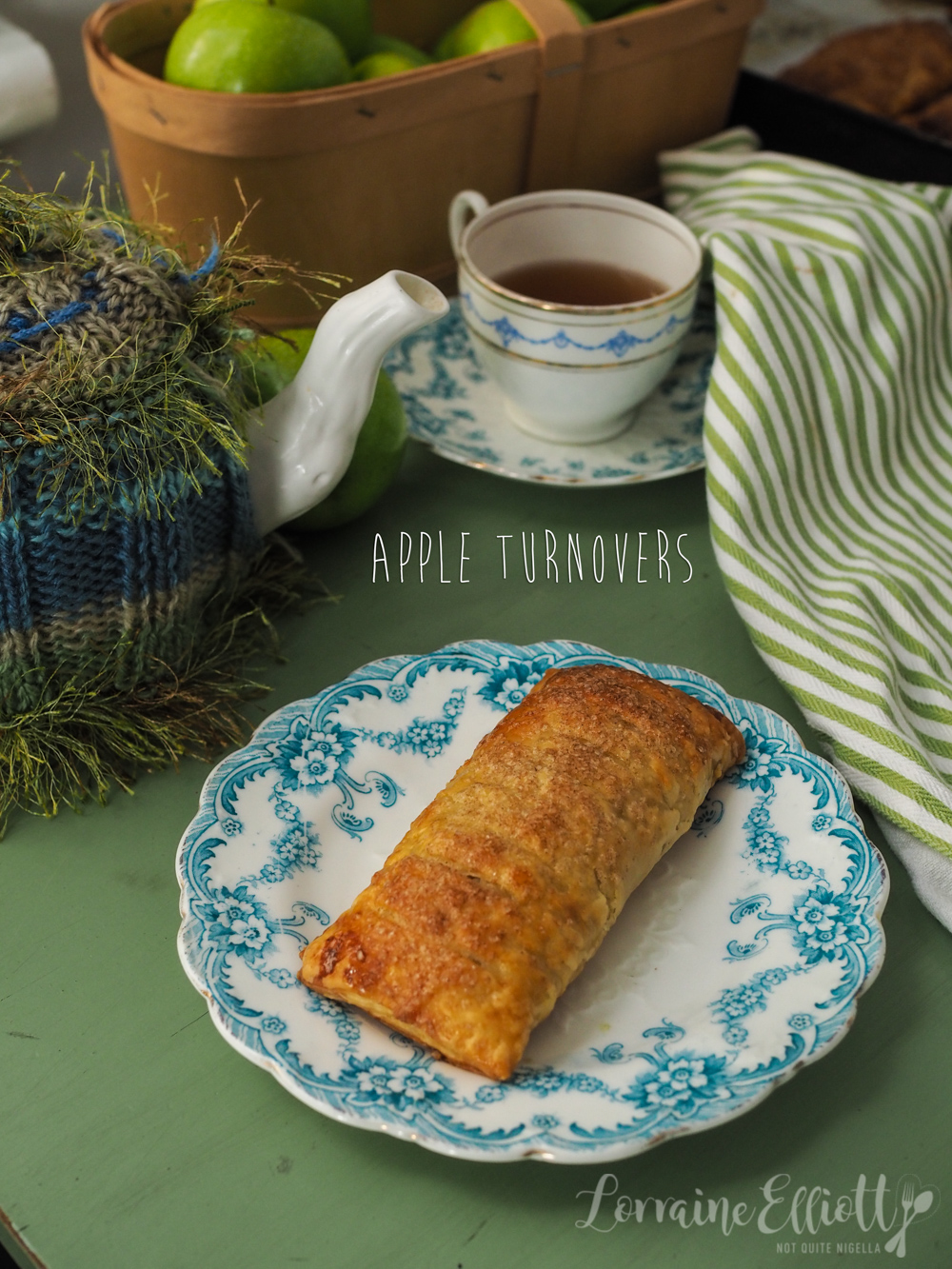 It's apple and apple turnover season and have got some delicious apple turnovers for you today. These are bursting with soft, spiced apple pie filling and are encased in a crispy, flakey butter puff pastry and sprinkled with crunchy cinnamon sugar! Perfect on their own or with a scoop of vanilla ice cream. These are a pushy recipe Dear Reader!

Apple turnovers are like the easy, hand pie version of an apple pie. You still get that delicious apple pie flavour but by using shop bought puff pastry they're so much easier to make and they're transportable too. They're also the perfect winter warmer as they can be baked ahead of time and then warmed up and served.

These apple turnovers are actually modelled a bit on the McDonalds apple pie. Here in Australia they're deep fried but in America they're baked (and psst you can definitely deep fry these babies if that is the vibe you are going for!). 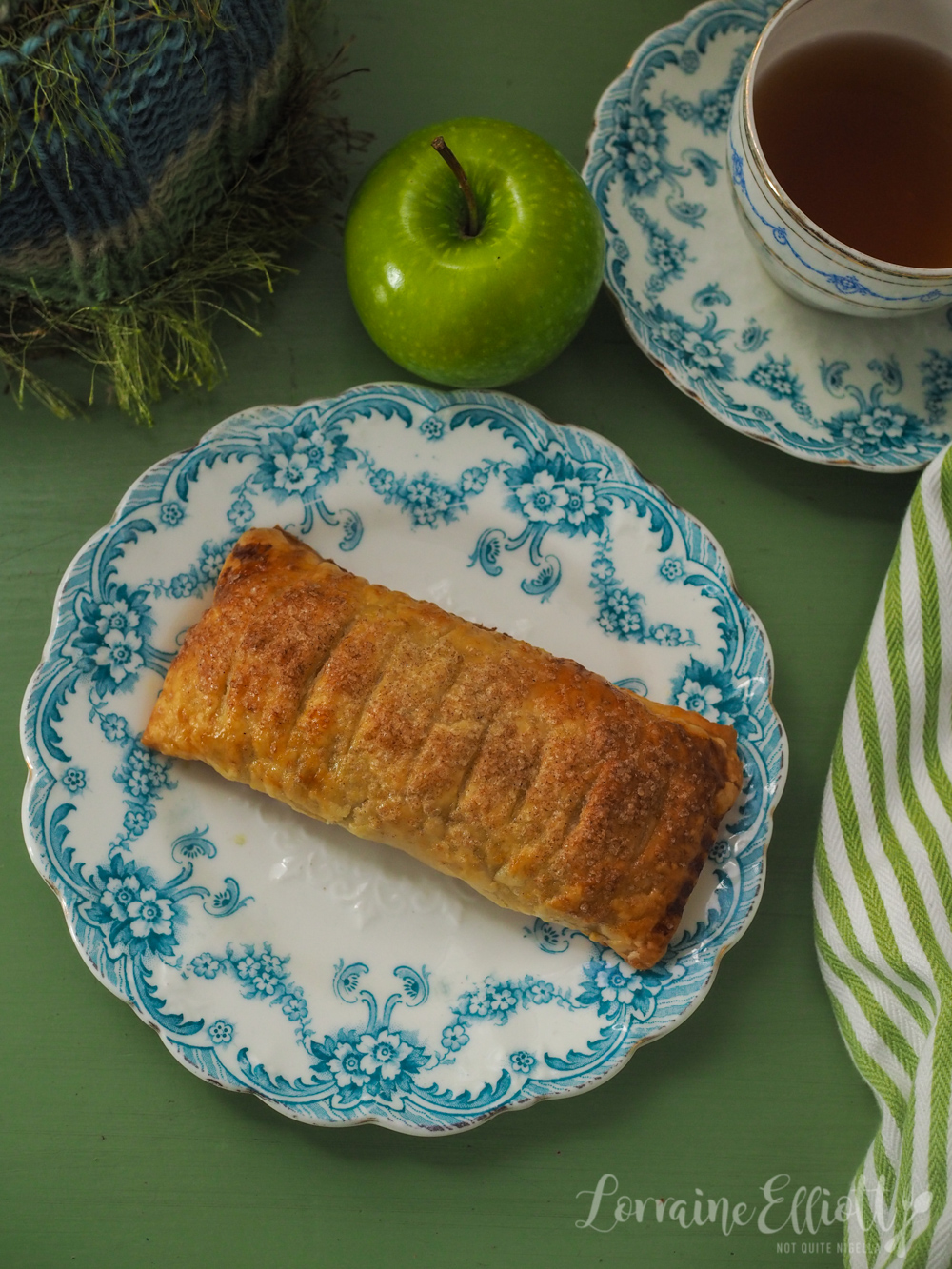 1 - Some recipes call for a lot of cinnamon but for this amount of apples, this level of cinnamon is perfect or it can become absolutely overwhelming. And you're talking to a cinnamon lover here.

2 - Make sure to cook the apples until tender but not mushy. Granny Smith apples are perfect for this purpose as they keep their shape. You also want to make sure that there is enough liquid so that the filling is saucy. 3 tablespoons of water is all that you need because the apples release their own juice when cooked. 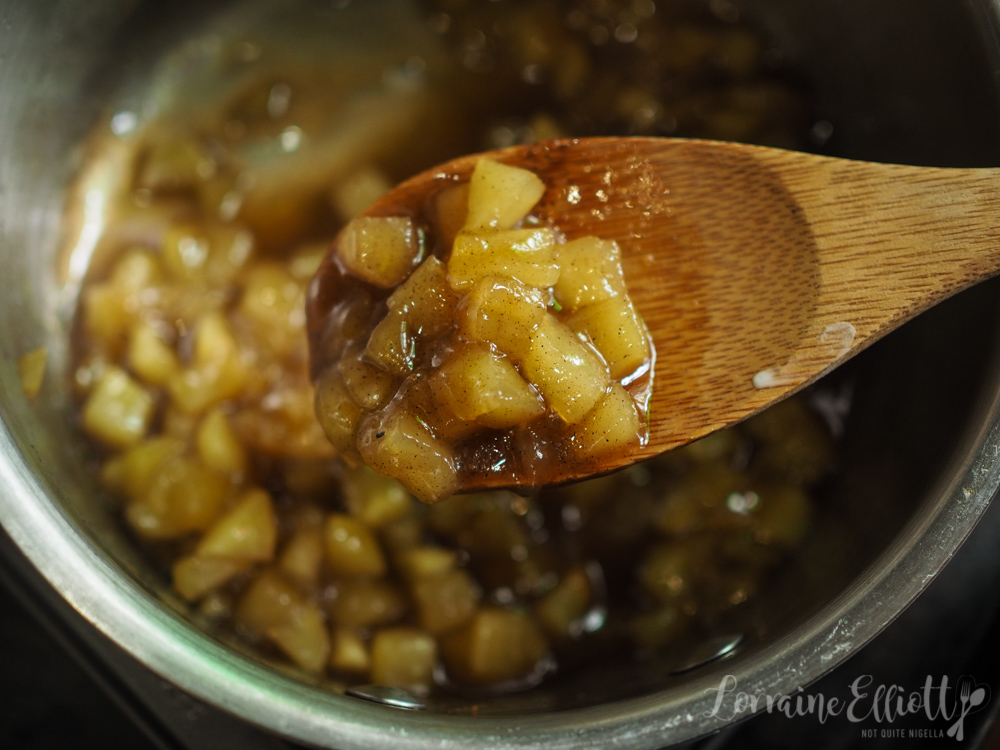 3 - I prefer to make the filling a few days ahead of time - this way the sauce firms up too but once it is baked the sauce becomes liquid again.

4 - Always use butter puff pastry - check the ingredients because the most common puff pastry doesn't have butter. In Australia most puff pastry comes already rolled out into thin sheets. In America you will need to roll it out thinly.

5 - Thaw out your puff pastry in the fridge, not the counter. Chilled puff pastry is much easier to handle than warm as it becomes floppy.

6 - Always place your turnovers back in the fridge for 30 minutes prior to baking. Puff pastry needs to be cold and baked in a very hot oven to get that signature rise. 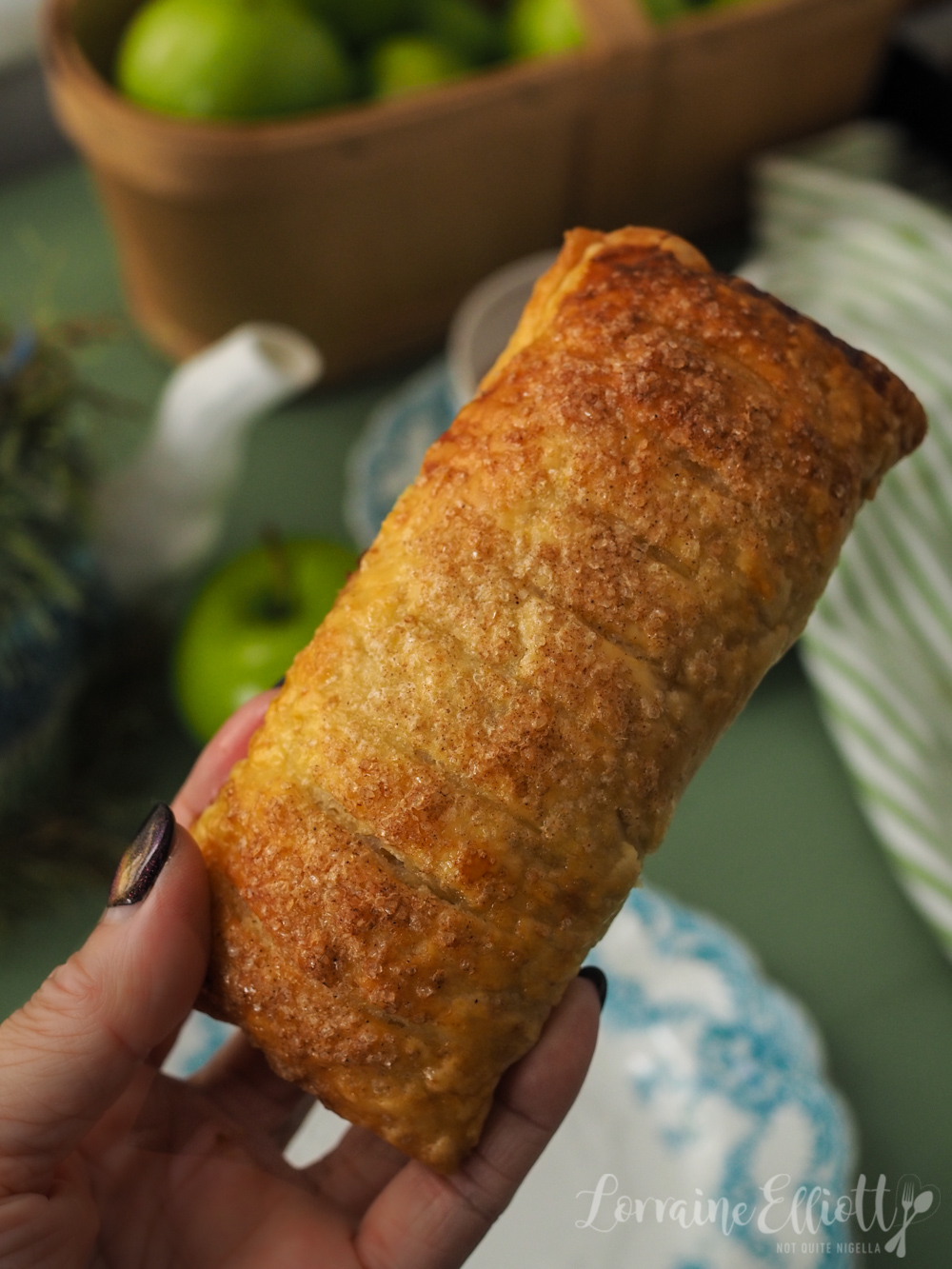 7 - You can add other spices to your apple turnover filling-vanilla or a pinch of ground cloves are also delicious. I kept this classic as I wanted to make it sort of like a McDonalds apple pie sort of filling.

8 - You can freeze unbaked apple turnovers so that you always have a supply ready to bake. I place them in the freezer them on a tray and then once frozen I pop them in a container or a ziplock bag. Bake them from frozen at 220C/440F/Gas mark 7 on a parchment lined tray for 30 minutes.

9 - These apple turnovers can also be deep fried if you want a McDonalds apple pie vibe! You don't need to egg wash and add cinnamon sugar, just fry as is until golden on both sides and then roll them in the cinnamon sugar like a donut after they're fried. 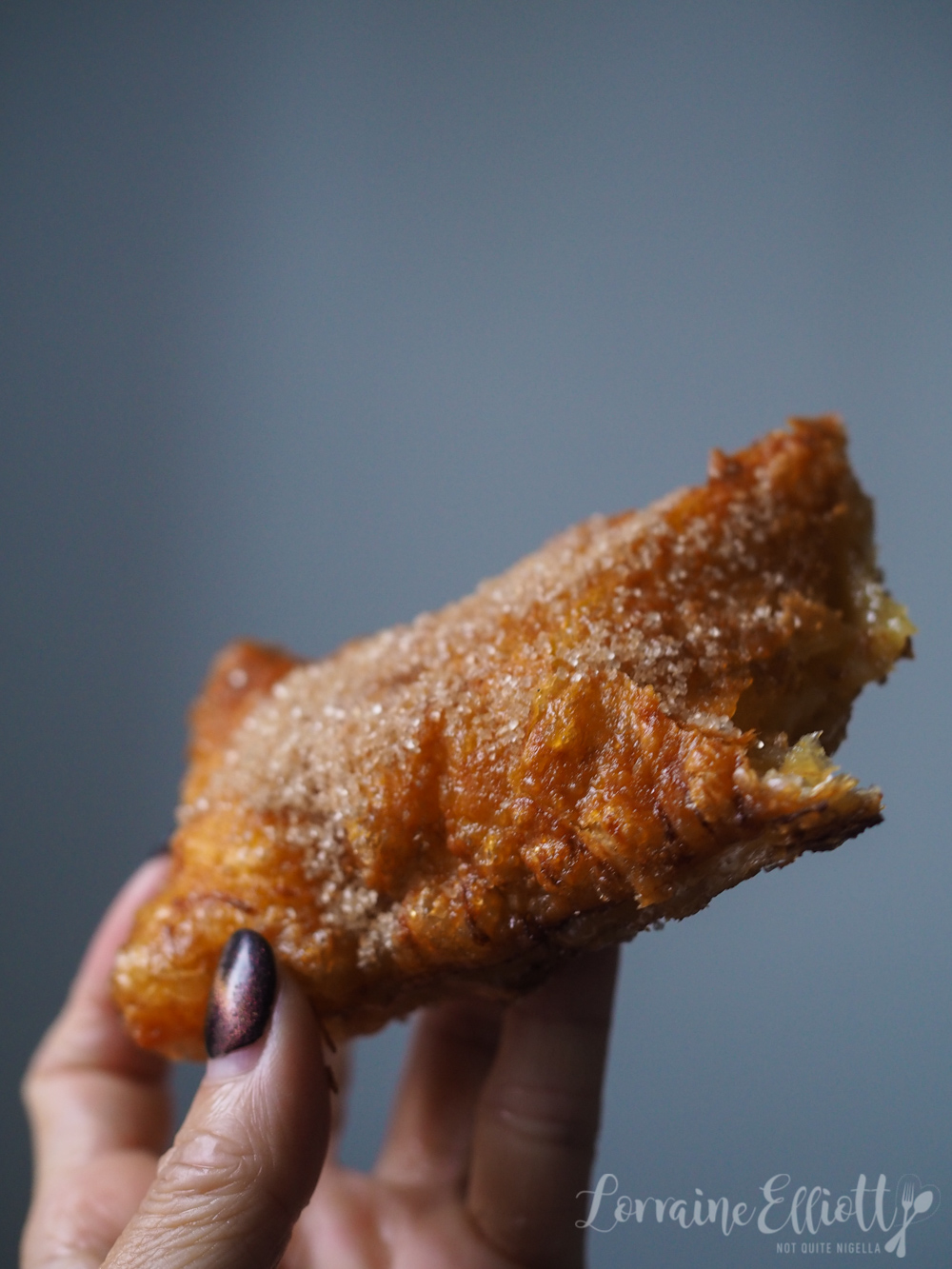 These apple turnovers are a wonderful snack in the afternoon and at times I've served them for Mr NQN's breakfast as well as dessert with a scoop of ice cream. We also ate these as a little snack before seeing a movie. One of my favourite 80's films is Top Gun and I was so excited to learn that the sequel was coming out this year. It's hard to convince Mr NQN to go to the movies as he sees them as a seething bed for COVID but I convinced him by using up the last of our Discover vouchers (for anyone outside of NSW the government gave everyone vouchers to spend at businesses affected by COVID). "Should we see it in 4DX?" I asked him. I figured that since I don't really watch action movies we should probably give it a go with Top Gun as I'm unlikely to ever try it again.

We ended up absolutely loving it and it really added to the cinema experience. 4DX is like a Disneyland ride where the seats move, you get sprayed in the face with water, there are gusts of wind, lights flash and they tickle your legs according to the scenes. It was so exciting and slightly exhausting too. I told my friend Dorothy about it and she laughed and said that her 87 year old father had just watched it in 4DX except that he didn't know what 4DX was and started freaking out when the seats started moving and he got sprayed in the face with water! Poor guy!

So tell me Dear Reader, have you ever seen a movie in 4DX? And have you watched anything good lately? 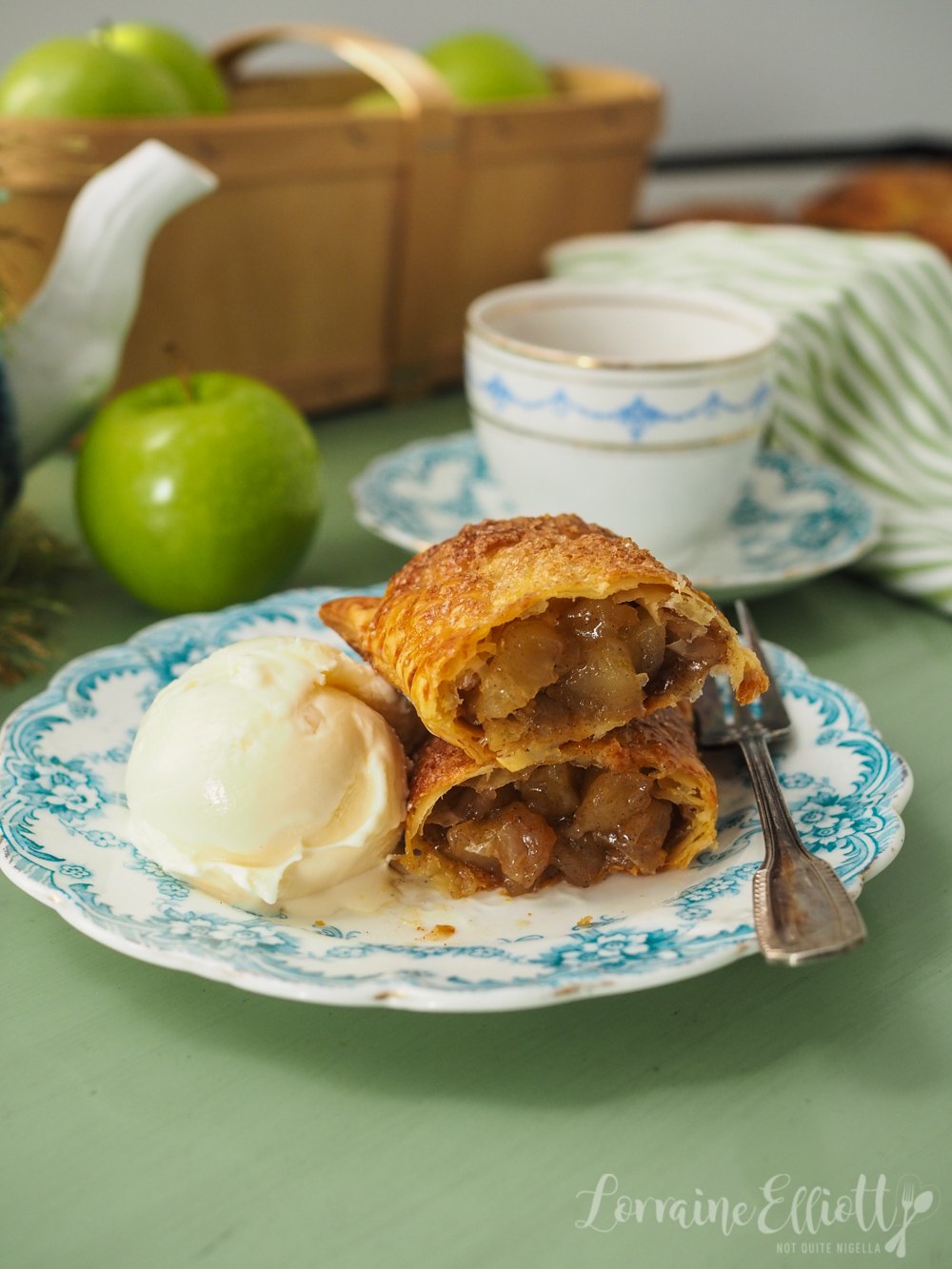 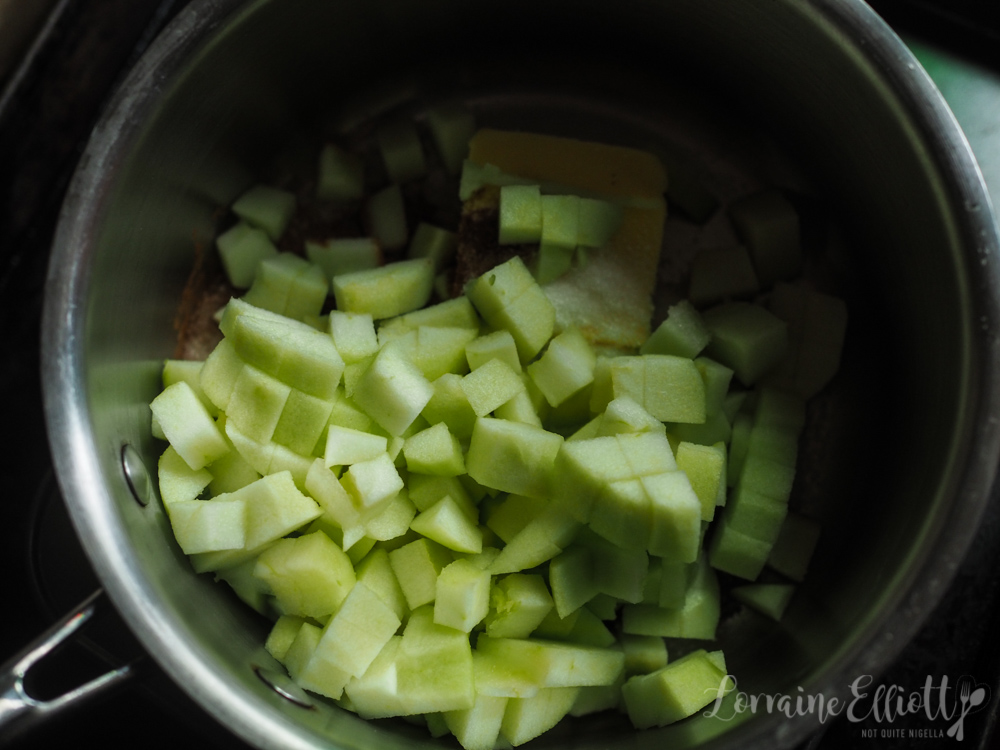 Step 1 - Peel and core the apples and then cut into into small pieces. Place them in a medium sized saucepan with butter, sugar, water, cinnamon, nutmeg and salt and bring to a simmer. Simmer for 8-10 minutes until apples are soft but not mushy. Reduce the heat to low and mix the cornstarch slurry together and then add to the pot and stir and allow to thicken. Cool and refrigerate. You can make this filling up to 5 days ahead of time and keep in the fridge. 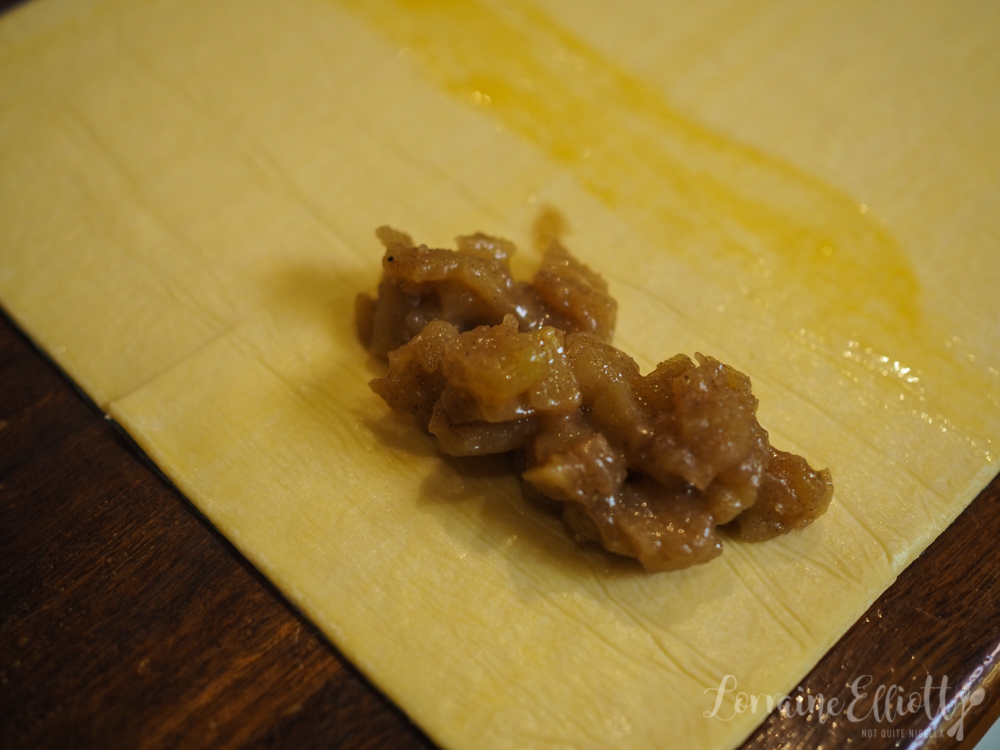 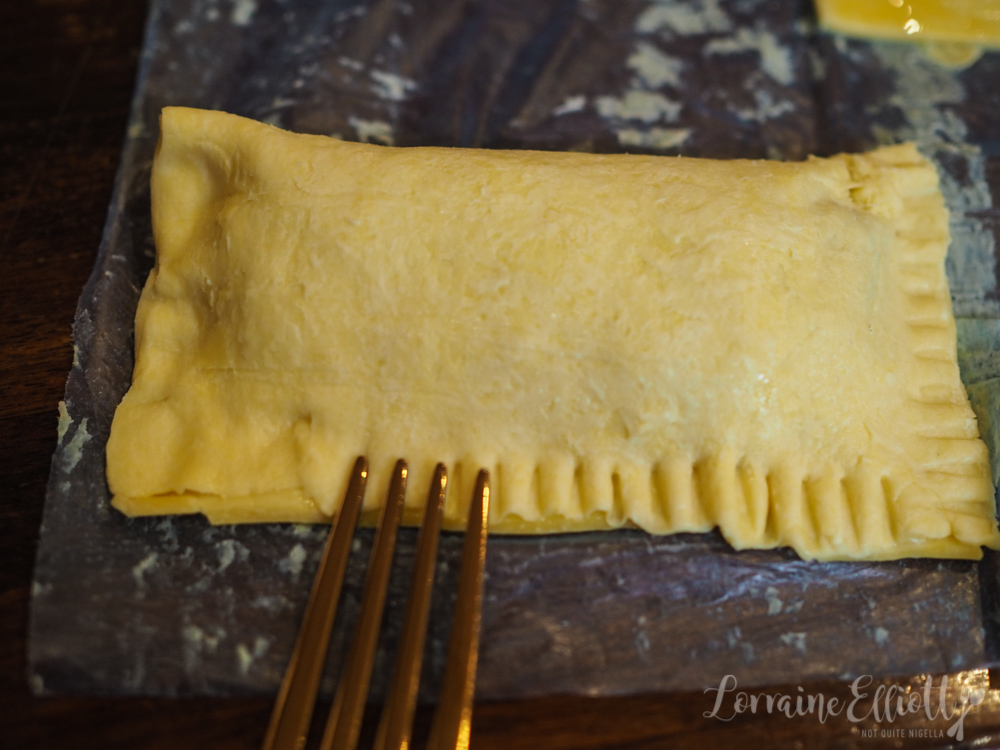 Using a fork to crimp the edges

Step 2 - Take out the pastry and thaw it in the fridge. Cut into 6 squares (around 12x12cms or 4.7x4.7inches each) and brush the edges with egg wash. Place 2-3 teaspoons of the apple filling in them and then gently press down to seal the edges. Crimp the edges with a fork pressing down around the edge. Lightly score the tops with a knife trying not to cut too deep. Brush the top with beaten egg. Combine the raw sugar and cinnamon and sprinkle on top of the pastry. Place in the fridge for 30 minutes while the oven heats up. 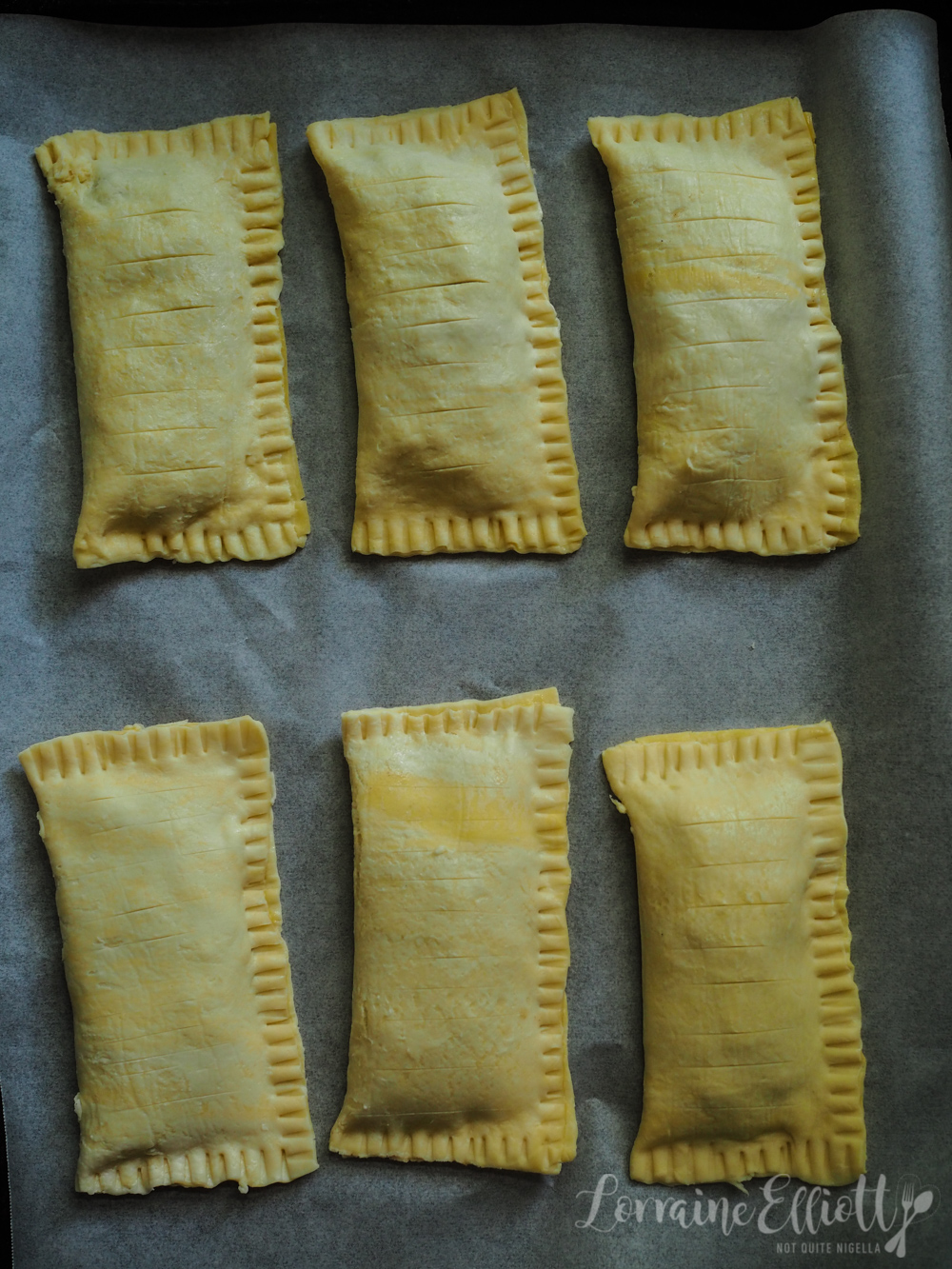 Scoring the tops to vent the pastry filling 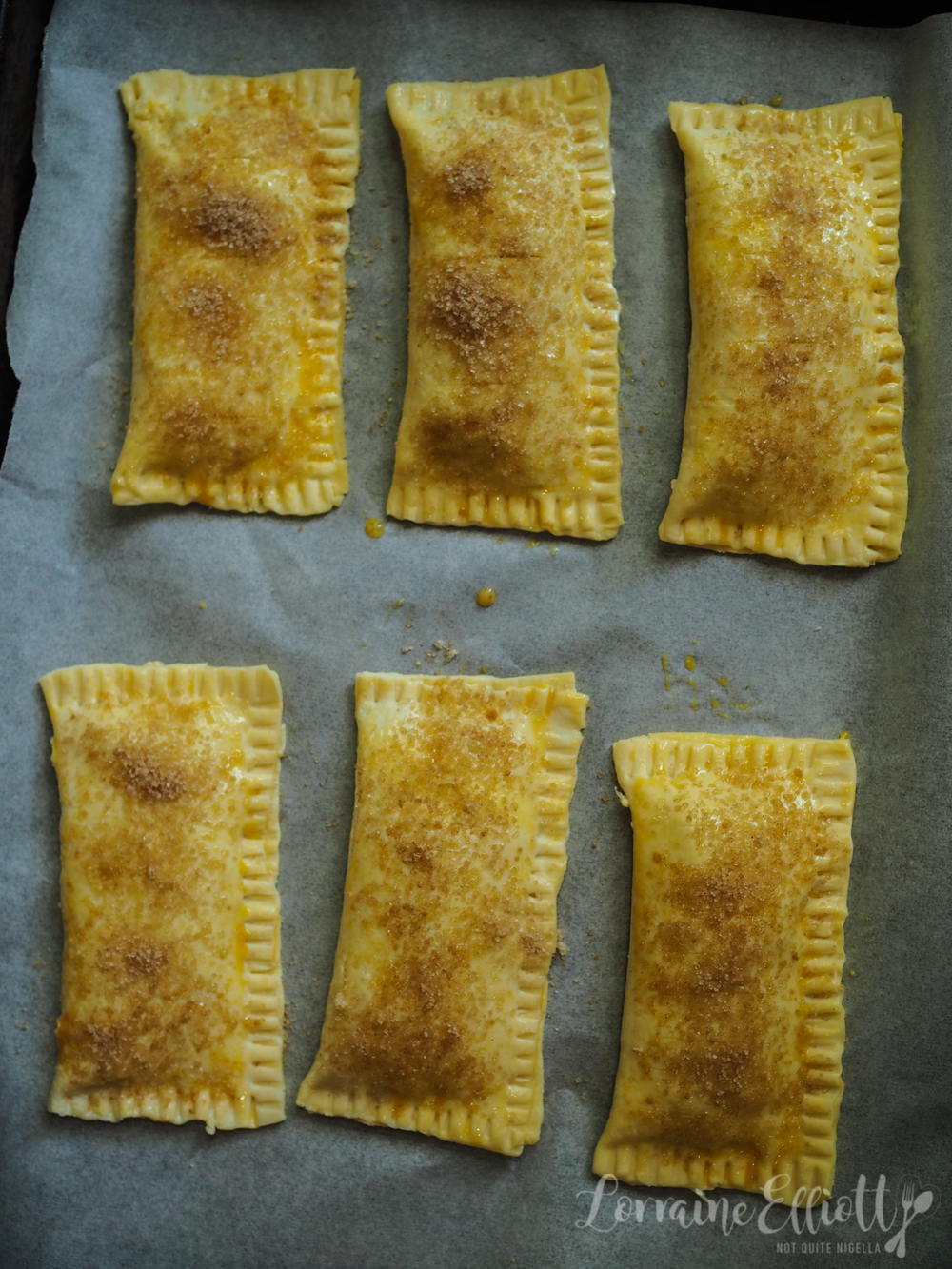 Step 3 - Preheat oven to 220C/440F/Gas mark 7 and bake the apple turnovers for 20-25 minutes or until golden brown. Serve with vanilla ice cream. 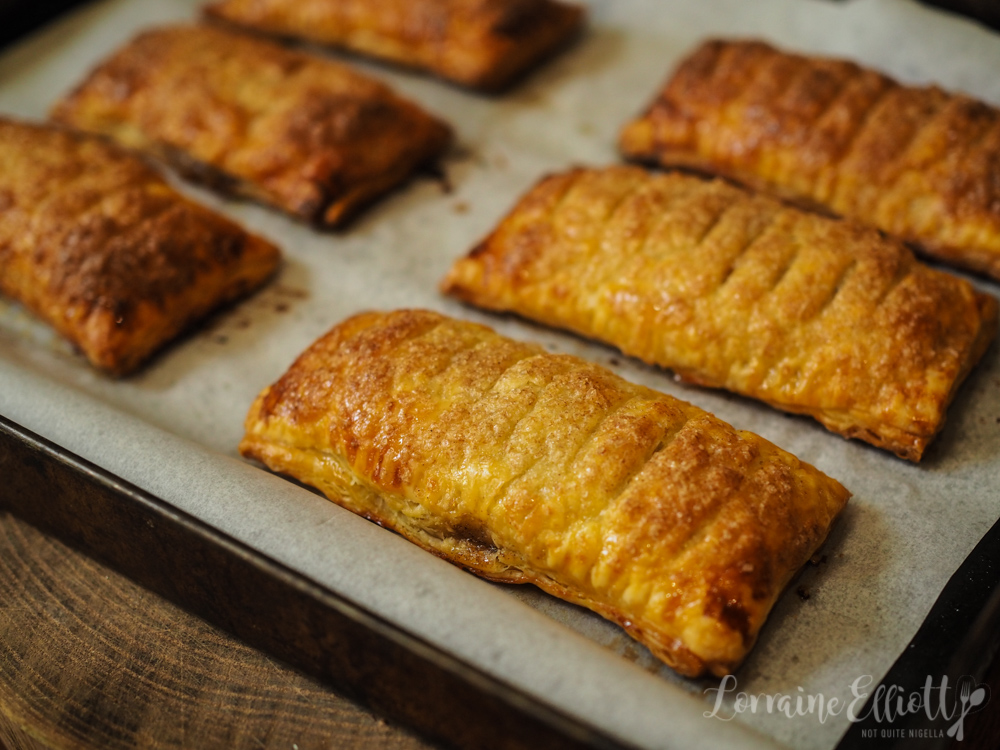 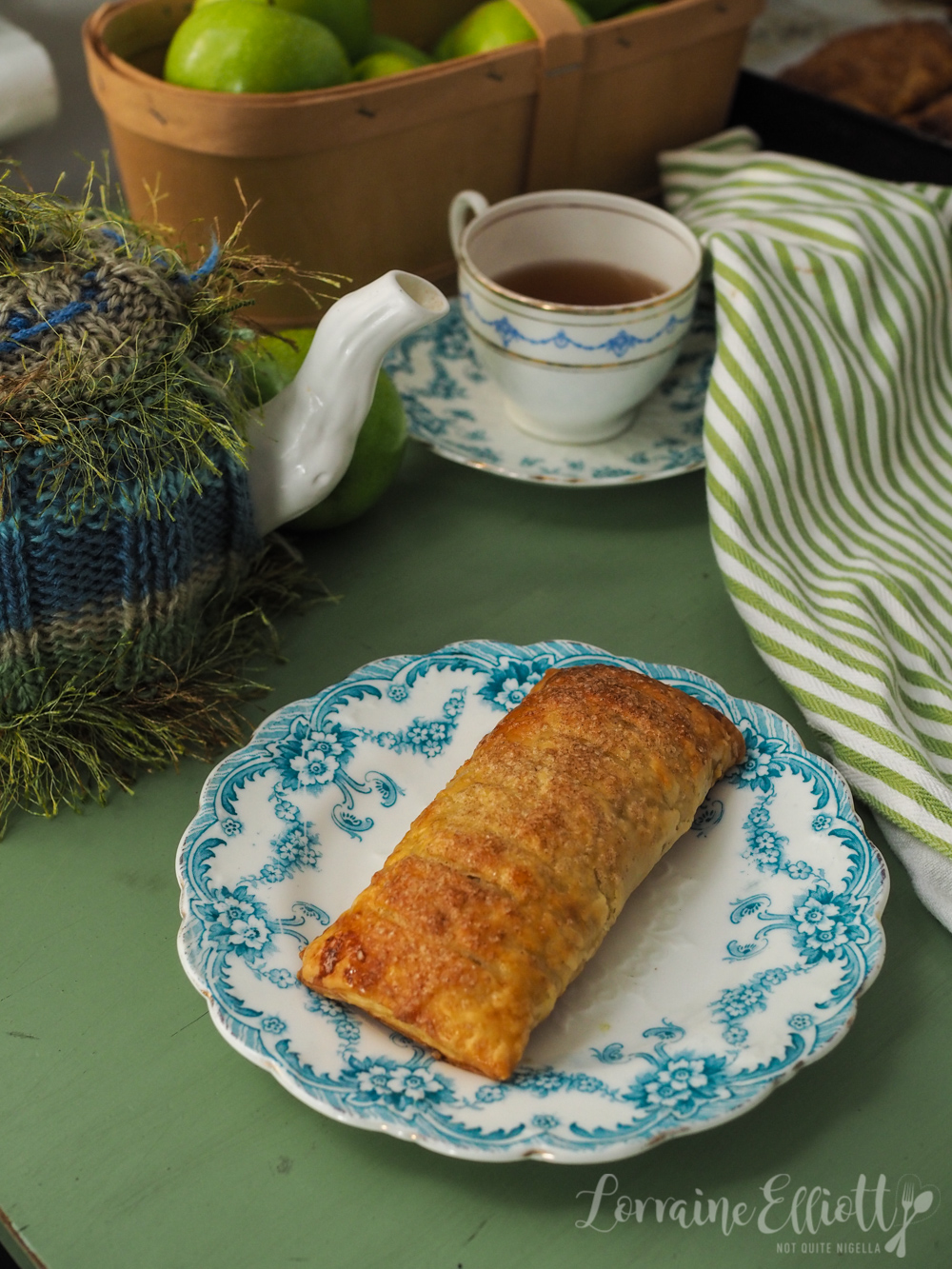