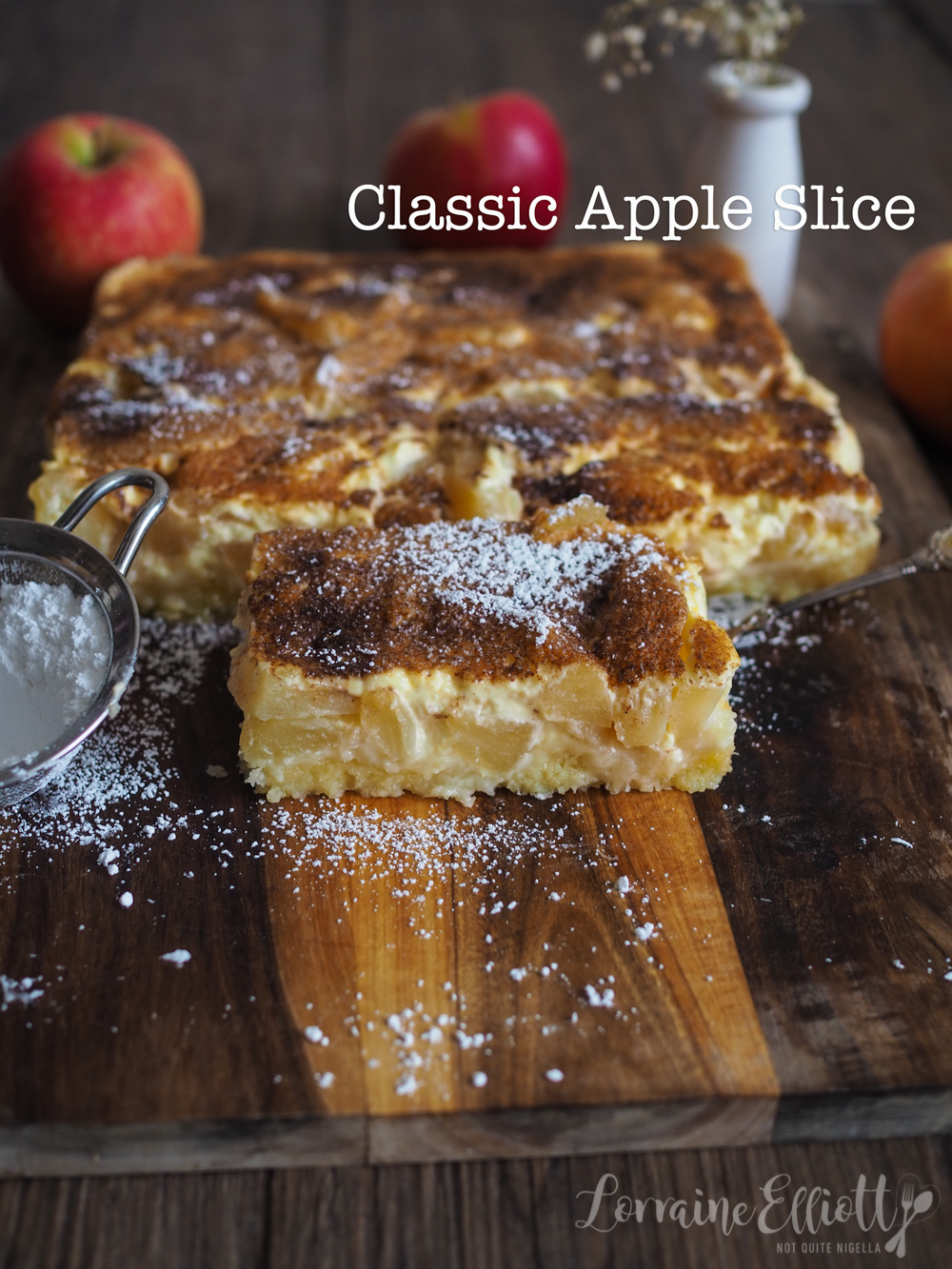 Apple slices are such a wonderful Australian classic cake shop treat. It starts with a layer of delicious coconut cake at the base and then a filling of apples and then a topping of cinnamon dusted sour cream! This is one of the tastiest, easiest bakes to make and is deliciously nostalgic (and a great way to use up and eat apples). This is a pushy recipe Dear Reader!

An apple slice isn't an apple pie where there is pastry on the top and the bottom. The base is like a cross between a cake and a biscuit or cookie. My favourite part is this base while Mr NQN loves the apple topping on this and I didn't know until my friend Nic sent me this recipe that the white creamy topping was made from sour cream! 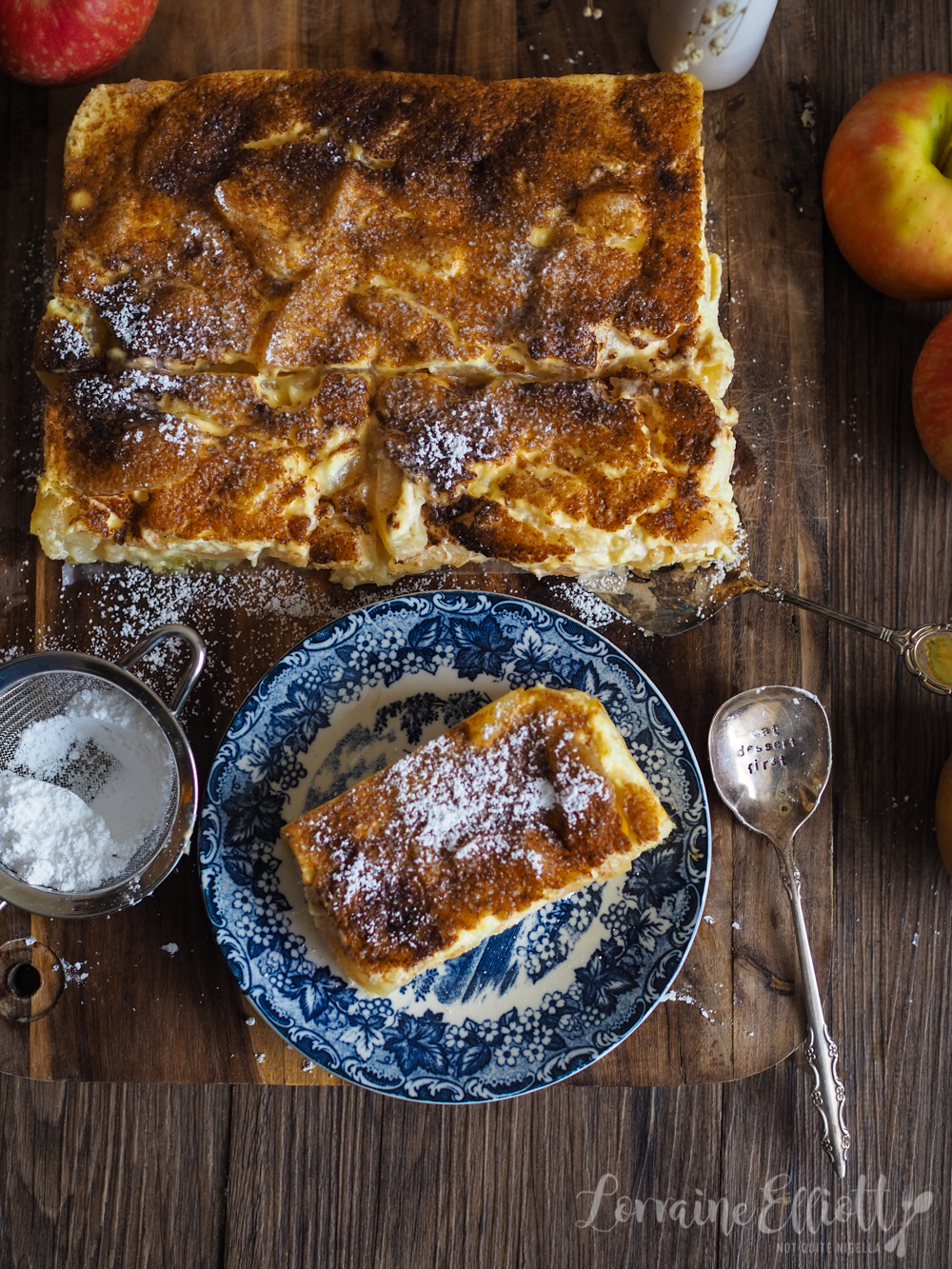 *When is apple season? *People tend to think of apples as a winter fruit but apples are actually harvested in summer but kept in cold store for months so that we have them available in winter. Once all of the sexy summer fruit is gone, we often have apples and citrus to get us through winter.

1 - If you are using home stewed apples rather than tinned, drain them to ensure that there isn't a lot of liquid or it will make the slice too wet.

2 - Some recipes call for just sour cream in the topping but I add the egg as it helps set it like a custard.

3 - I like my slices quite thick so I use a 20X20cm or 8x8 inch square tin. You can use a lamington or slice tin but it will be thinner and take a bit less time to cook.

4 - This apple slice has to cool and then be chilled completely and then sliced as it needs to firm up completely before eating. It must be served chilled and tastes even better after a day or two in the fridge!

5 - Store this slice in the fridge. It will last for 4-5 days. If you find that the base is too hard at first it will soften up over the next few days. I find I like it best on the 4th day! 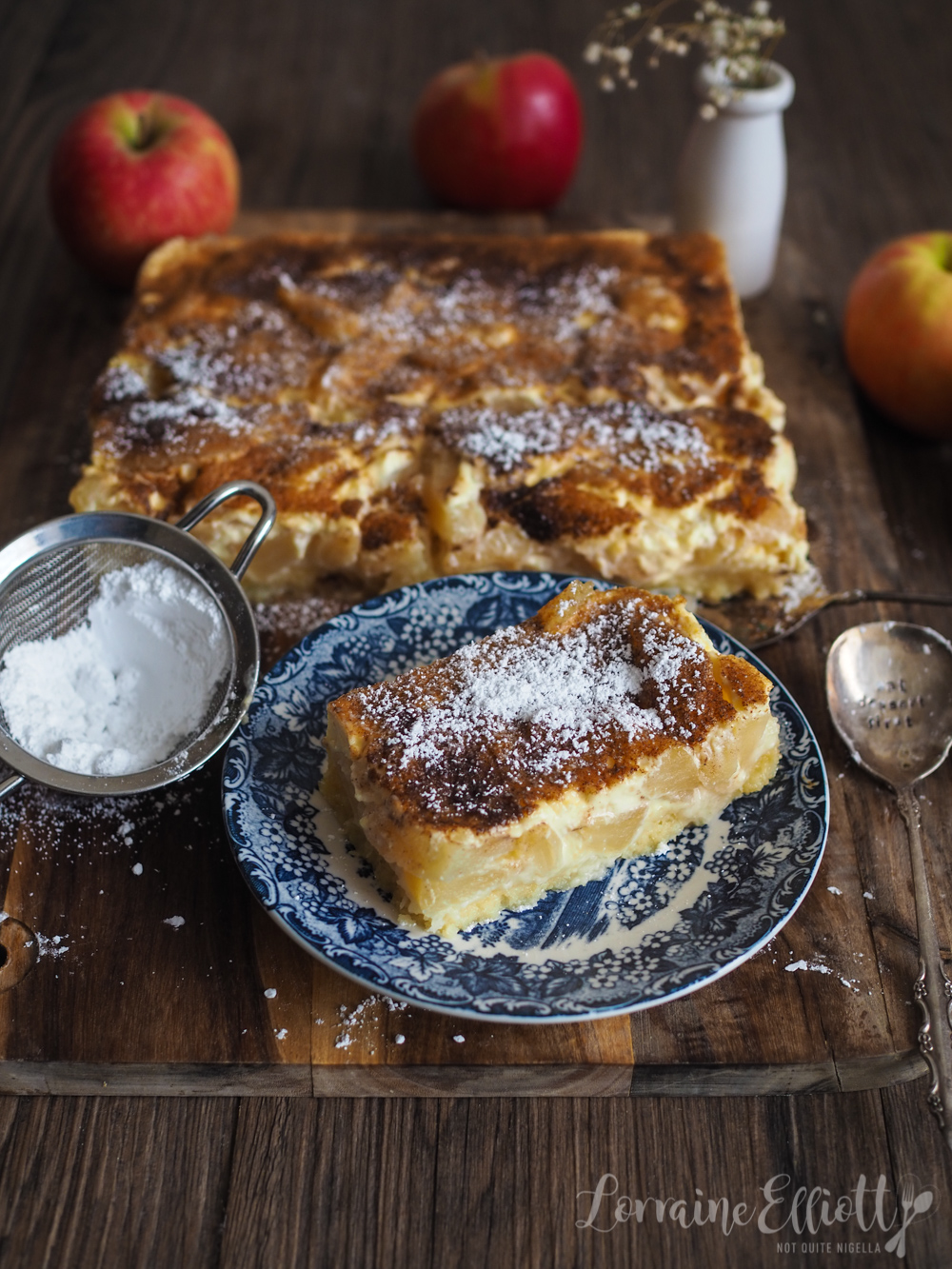 I've made this slice with both tinned apples (a pantry relic from 2020 COVID where we bought tinned fruit) and fresh, stewed apples and they both work well. The only advantage to home stewed apples is that I tend to add cinnamon and sugar to them.

This recipe was inspired by a late afternoon stroll down a street. At a crossing I paused and looked up and saw one of those old fashioned bakeries that sell apple slices, custard tarts, vanilla slices and those very random frogs. I went in and bought one and it was delicious, imbued with memories I had thought were long gone. I was so excited to make it that I woke up early the next morning and made it.

I'm not an early morning person but a couple of weeks ago I had to wake up early for an event and that turned out to be a most fortuitous thing indeed. It was early and Mr NQN had just left for work. Bleary eyed, I stumbled out of the bedroom and saw Teddy asleep in the lounge room wrapped up in a blanket. I said good morning to him and gave him a kiss and then I turned my head as I heard a strange hissing noise. It was coming from the kitchen. 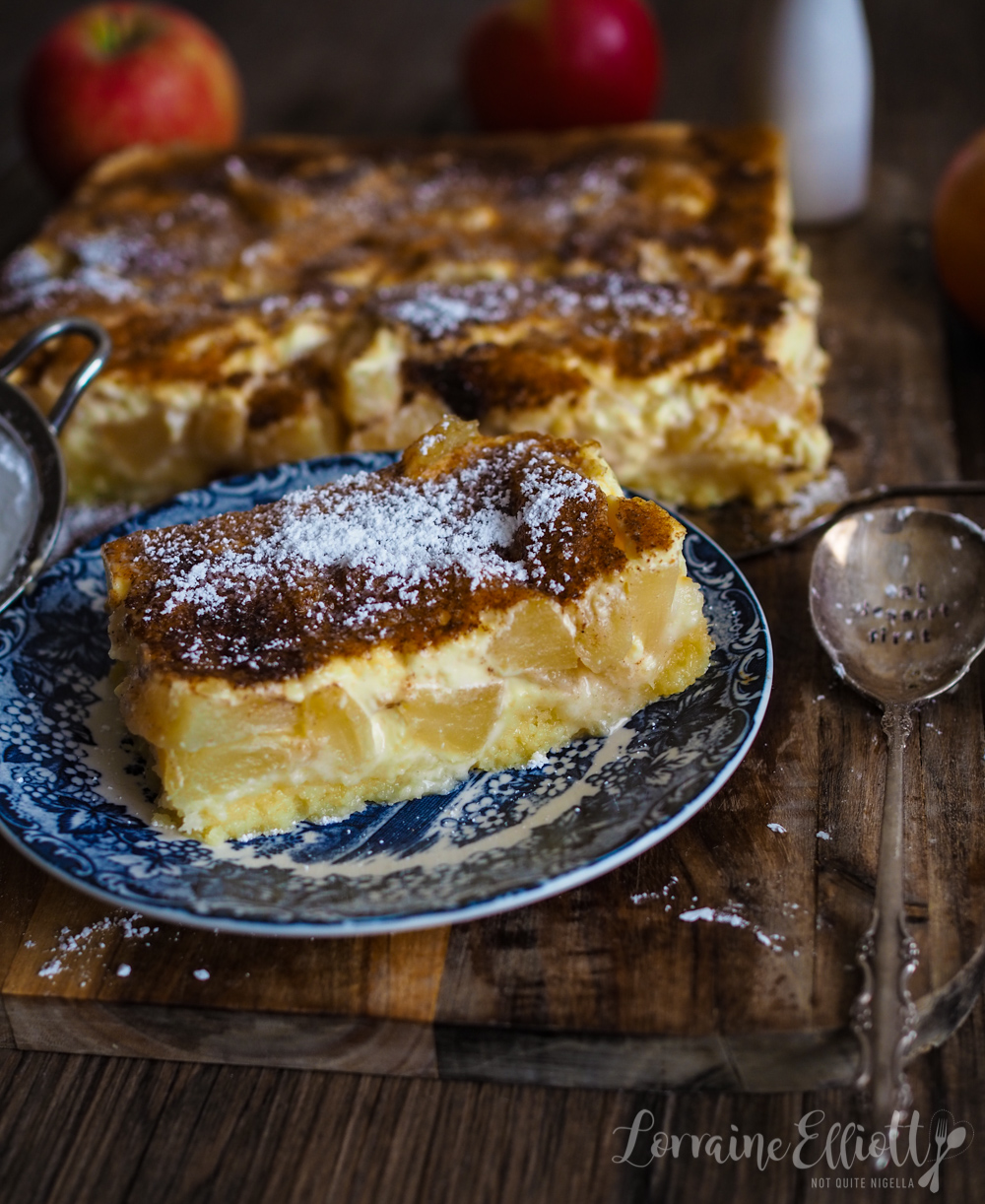 The hissing noise was our hot water tank leaking and steam was rising from the kitchen floor. Water was rapidly flooding into the lounge room.

Dear Reader, did I mention that I am terrible in a crisis? I will literally stand there frozen while disaster unfolds around me.

I had to do something as the water rapidly filled our lounge room. I ripped off my socks and rolled up the legs of my pants. I opened up the kitchen sink cupboard where the tank sits but it was dark in there. Running back I grabbed my glasses and phone to use as a torch and turned the only knob I could see. That stopped the water but the hissing continued. During this time I messaged Mr NQN who was on the tram to work and he came straight back (he's good in a crisis). Our tank was supposed to have something to stop the water if it detected a leak but well what can I say but don't install a Rheem LOL.

I rang one plumber who said that they would come out in four hours. When he arrived he was mumbling and nervous and said that it was too hard and fled (really!).Then I rang another that he recommended and they arrived within 90 minutes. They fixed it while I continued my Zoom meetings with plumbers going back and forth in the background.

What a day! Still we counted ourselves lucky that it didn't happen while we were away and that it happened on a day where we could both be home! 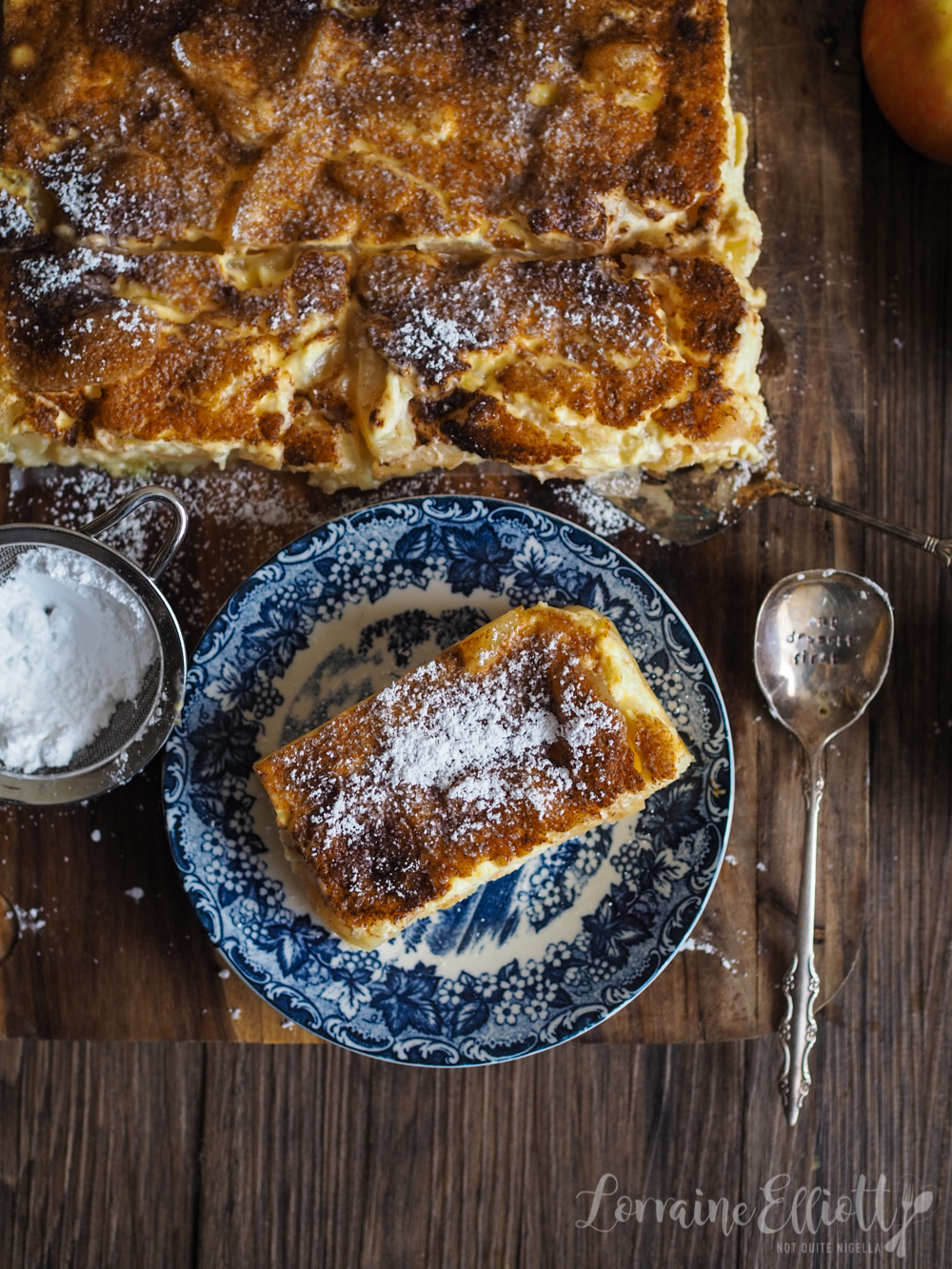 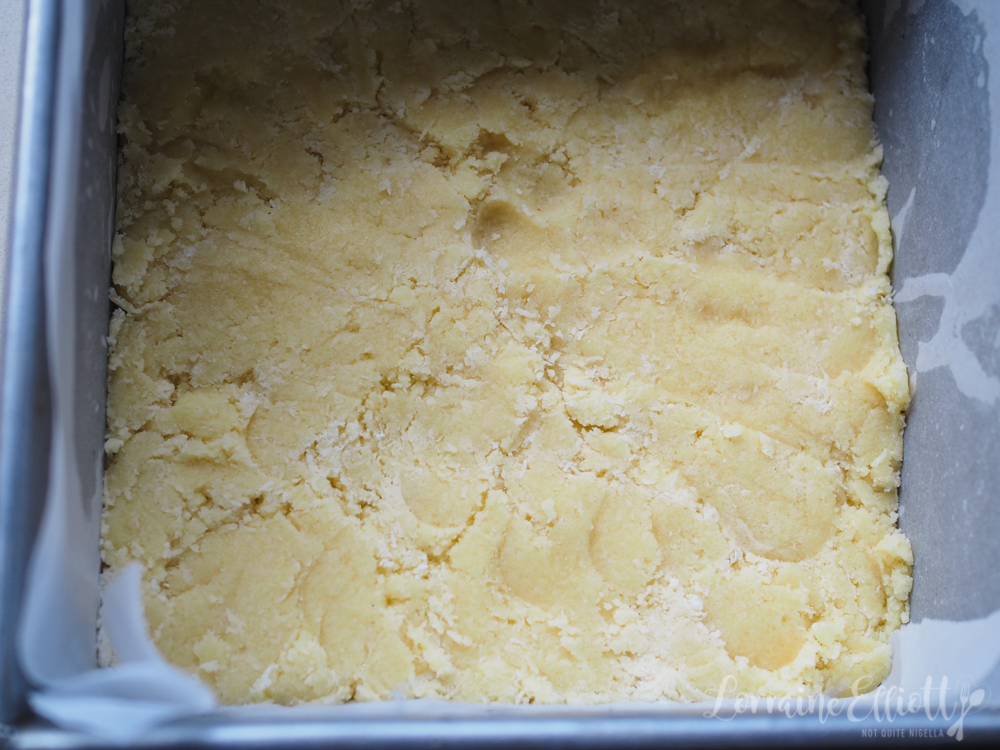 Step 2 - In a large bowl, whisk the cake flour, baking powder, coconut, sugar and salt until combined. Add the melted butter and mix and then press into the prepared tin and bake for 20 minutes or until set. 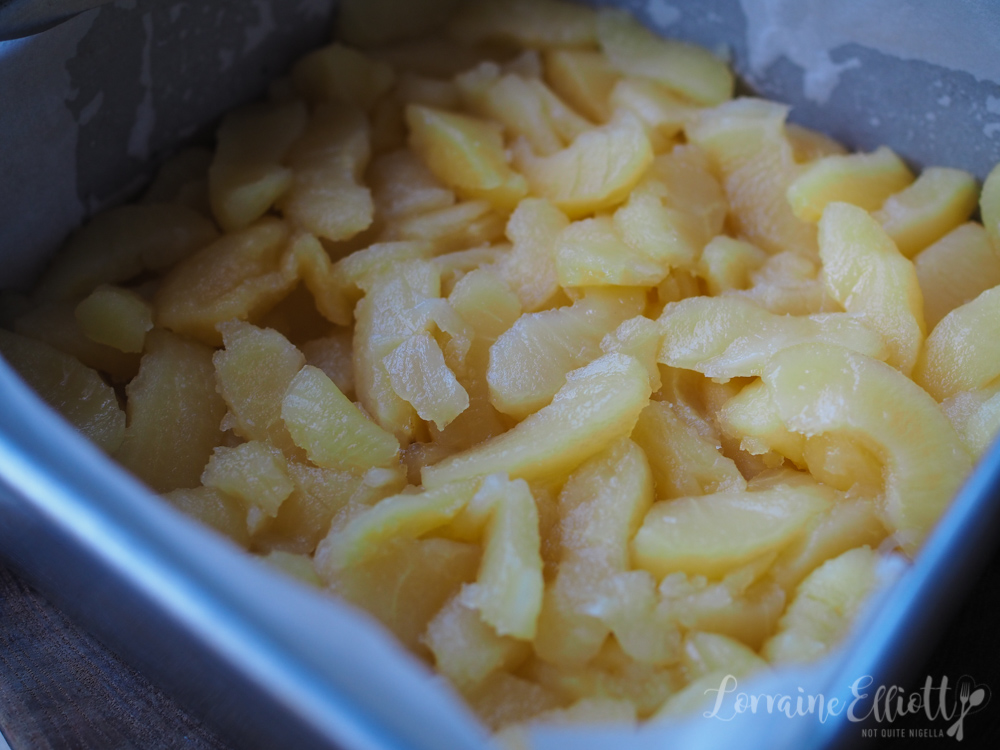 Step 3 - While the base is baking mix the apples and the sugar together. Then whisk the sour cream, sugar and egg together and set aside. When the base is cooked spread the sweetened apples on top of the cooked base. 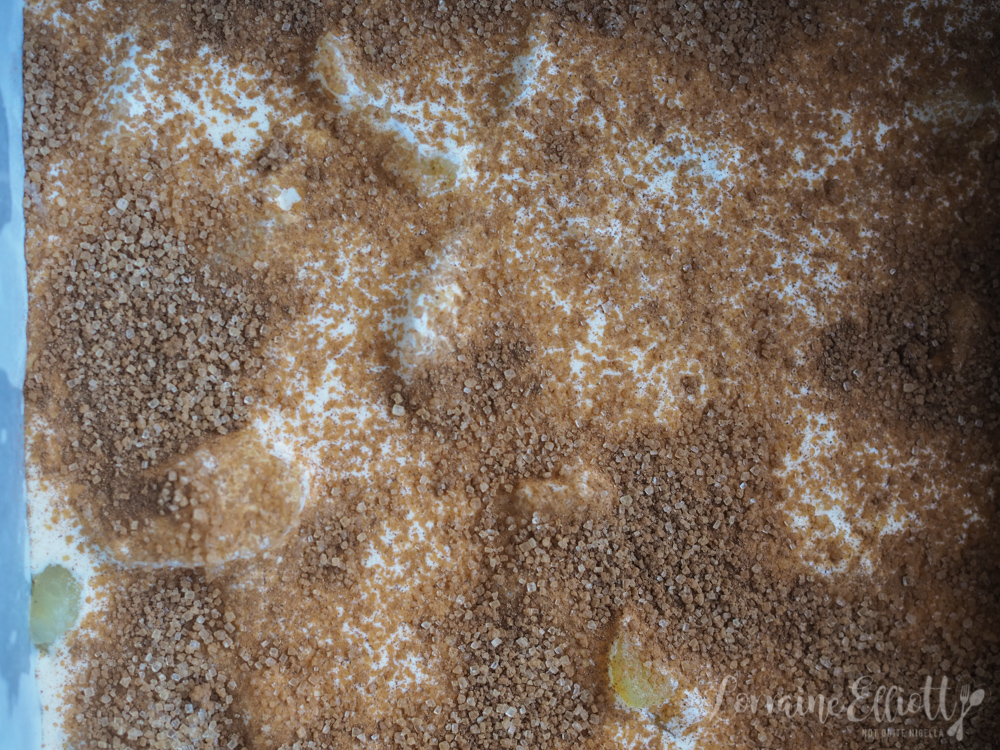 Step 4 - Raise the oven temperature to 180C/350F. Then spoon over with the sour cream mixture over the apples and then sprinkle with cinnamon sugar. Bake for 25 minutes or until set. Cool and then chill in the fridge and then cut up. Serve chilled (this needs to be stored in the fridge). 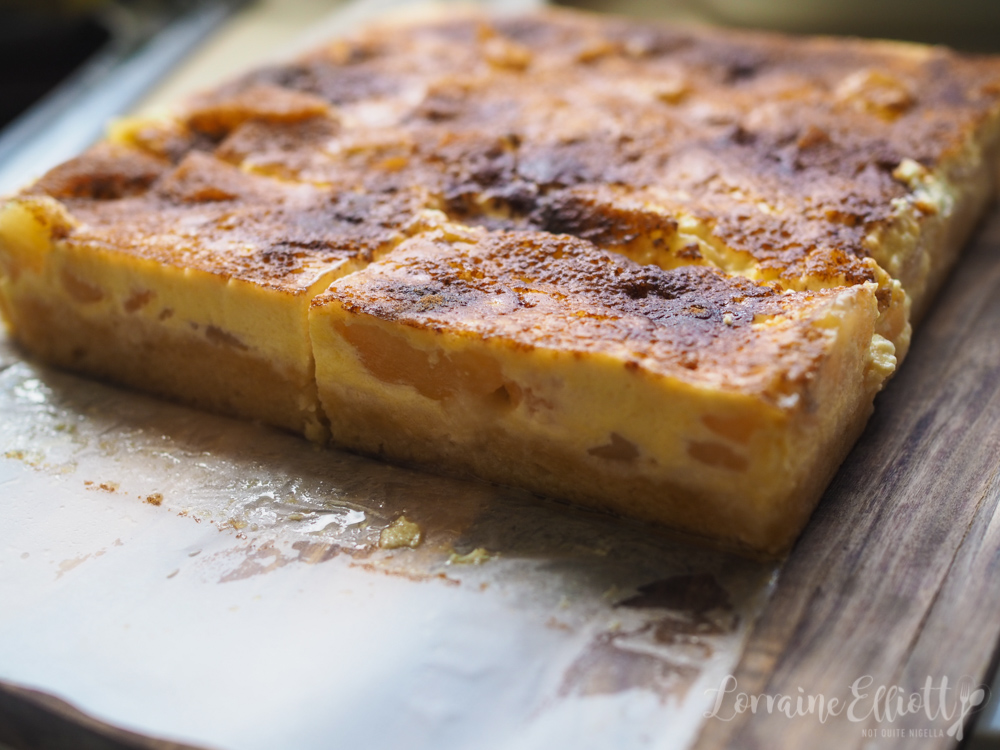