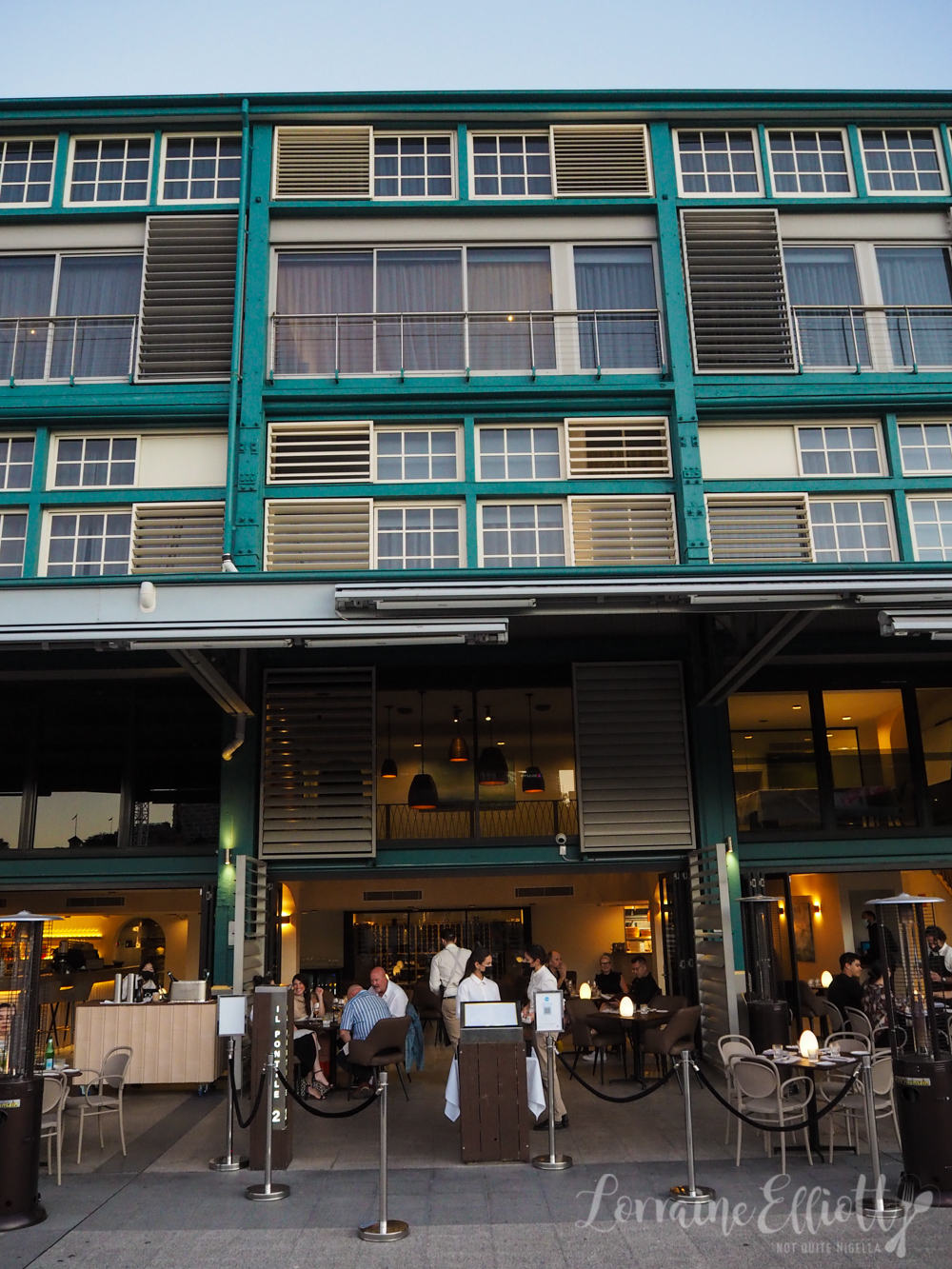 Italian restaurant Il Pontile is the latest newcomer to Woolloomooloo's Finger Wharf. Chef Mario Percuoco (son of Buon Ricordo's Armando Percuoco) serves up wonderful Italian dishes with a focus on Neapolitan cuisine in an indoor and outdoor setting - there is no better place to be on a sunny day. There are some must-order dishes including a seafood linguine, Pacherri Sorrentina and a divine Sfogliatelle pastry to finish off. 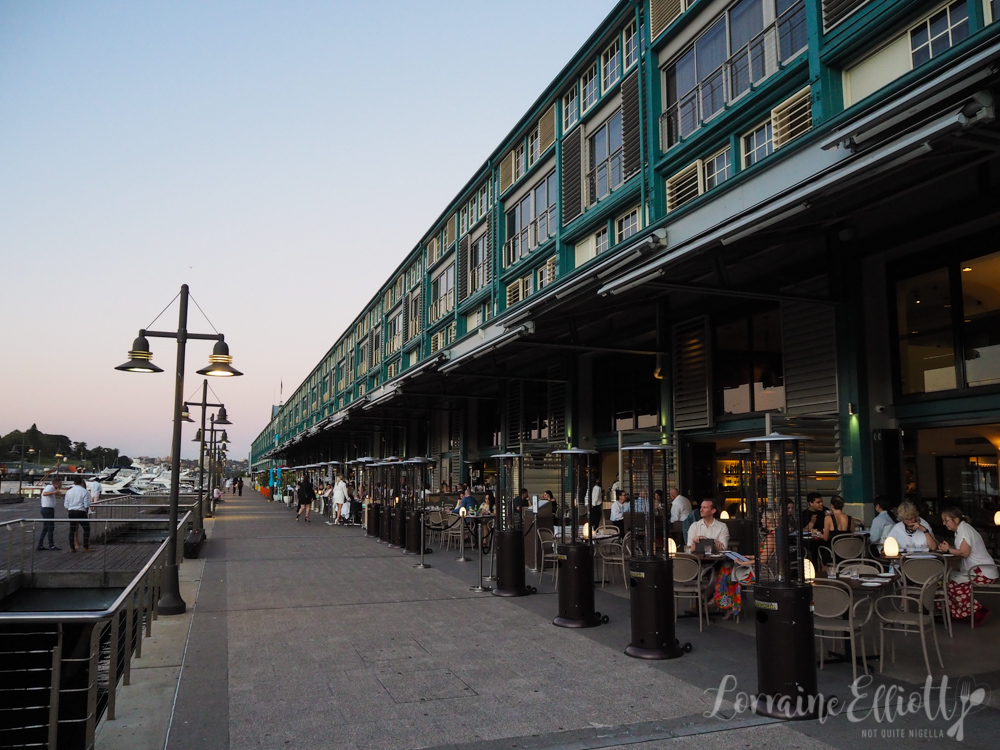 Il Pontile means the jetty and when you arrive at the finger wharf's jetty it is the first restaurant taking over the space of Aki's and Amalfi Way. The restaurant is owned by chef Mario Percuoco and backed by the hospitality division of the Graaf Group. Mario chose the wharfside location as it reminded him of Naples and prefers to call this "nice dining" instead of "fine dining". It is also the only restaurant along the wharf that is dog friendly - indeed the owners have Nero, a friendly German Shepherd that often makes an appearance (perhaps hoping that a customer will order the Bistecca alla Fiorentina). 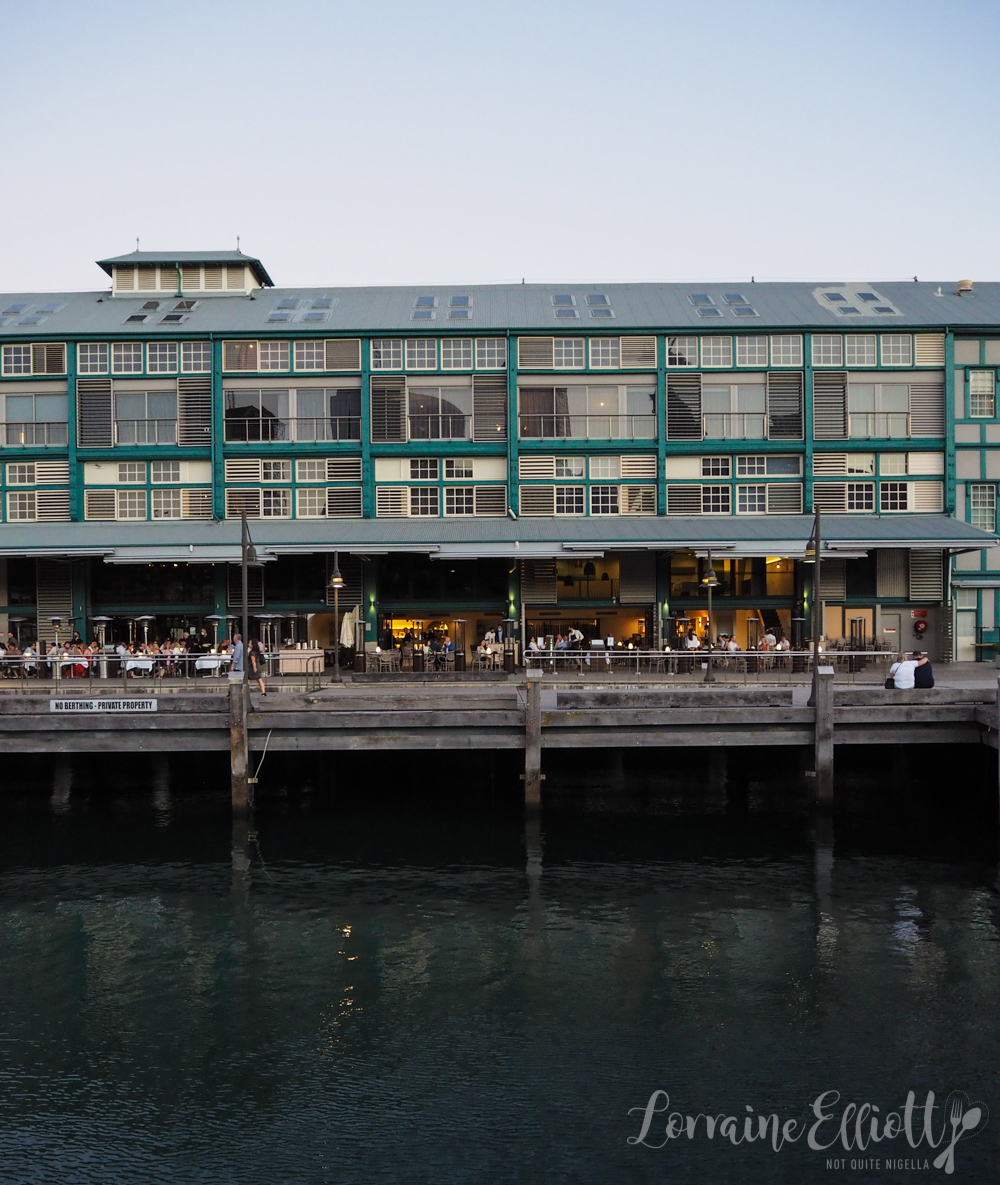 Mario was born in Naples and is a fourth generation Italian chef. In the 1950s and 1960s Mario's namesake grandfather hosted some famous names at his Naples restaurant with guests like Bette Davis, Elizabeth Taylor and Sophia Loren as well as then US President Dwight Eisenhower before migrating to Sydney to open Pulcinella in Kings Cross. His father Armando Percuoco arrived in Australia in 1972 and created the iconic Buon Ricordo in Paddington in 1987. "He (Armando) was the best teacher for me in the Italian cuisine. It was a natural progression for me, being 4 generations chefs. No competition, you can’t compete with the best!" says Mario. 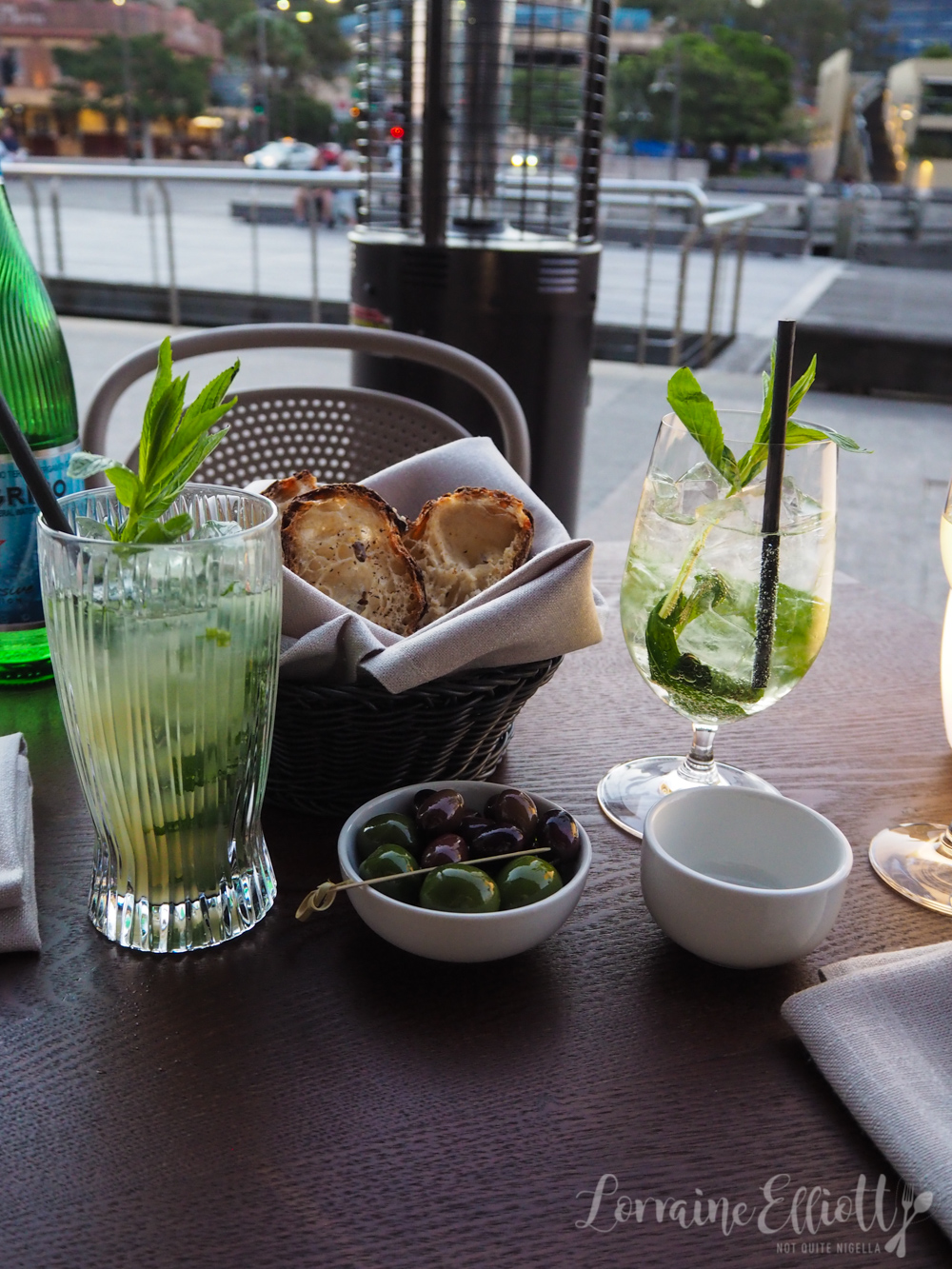 Service is very friendly and they bring out some bread and olives with fried almonds which we have with our cocktails. I order a Hugo (Prosecco, Fiorente elderflower, soda and mint) which is pretty much the perfect cocktail (for me) as it is light, refreshing and floral without being overly sweet and fruity. Mr NQN has a Mojito which is perfect for this evening's warm weather with Pampero blanco, Limoncello Massa, lime juice, mint, soda and sugar syrup. 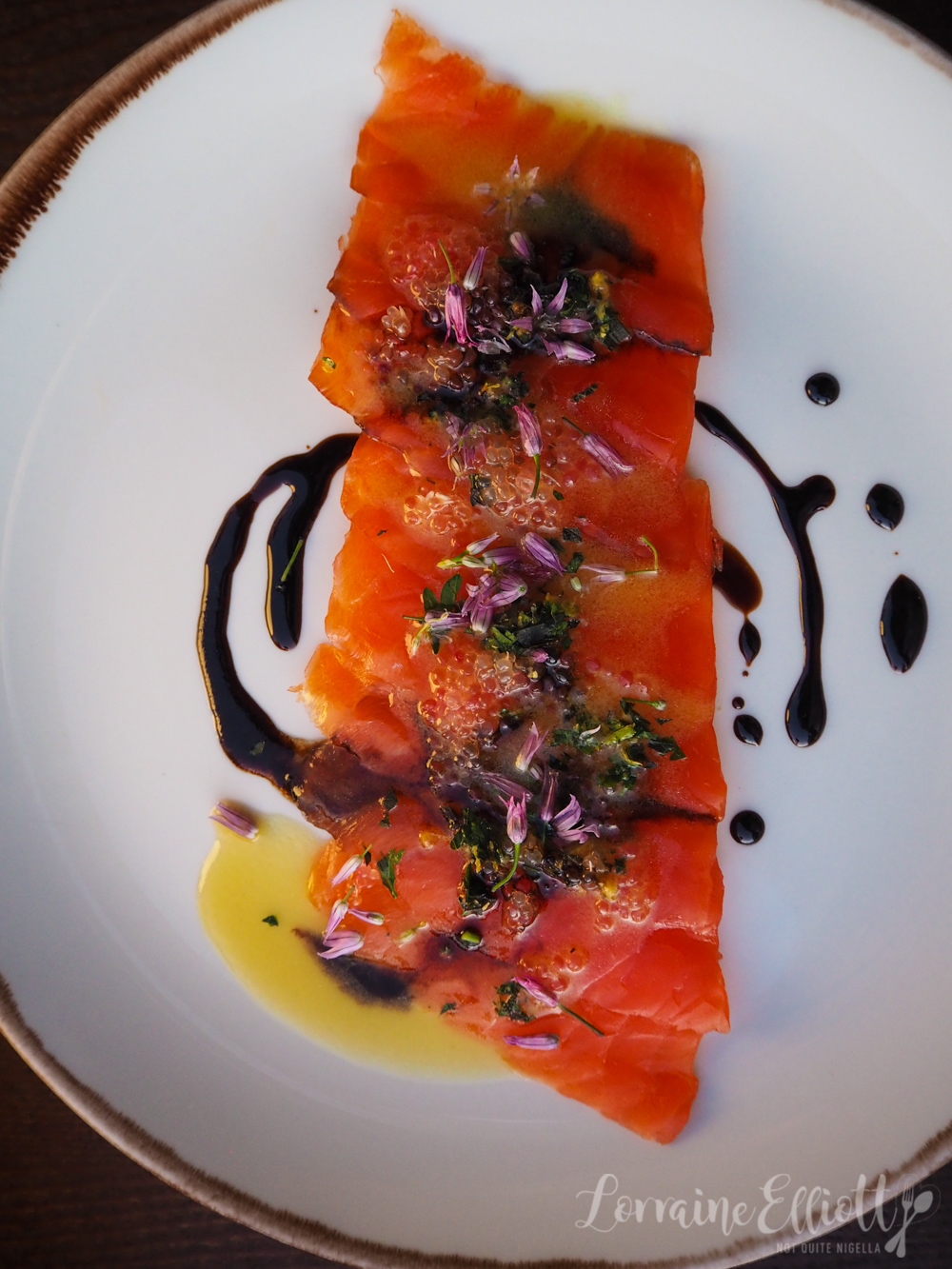 The trout is house cured for 48 hours and is served thinly sliced. The trout is topped with finger lime, chive flowers and extra virgin olive oil as well as some aged balsamic vinegar. 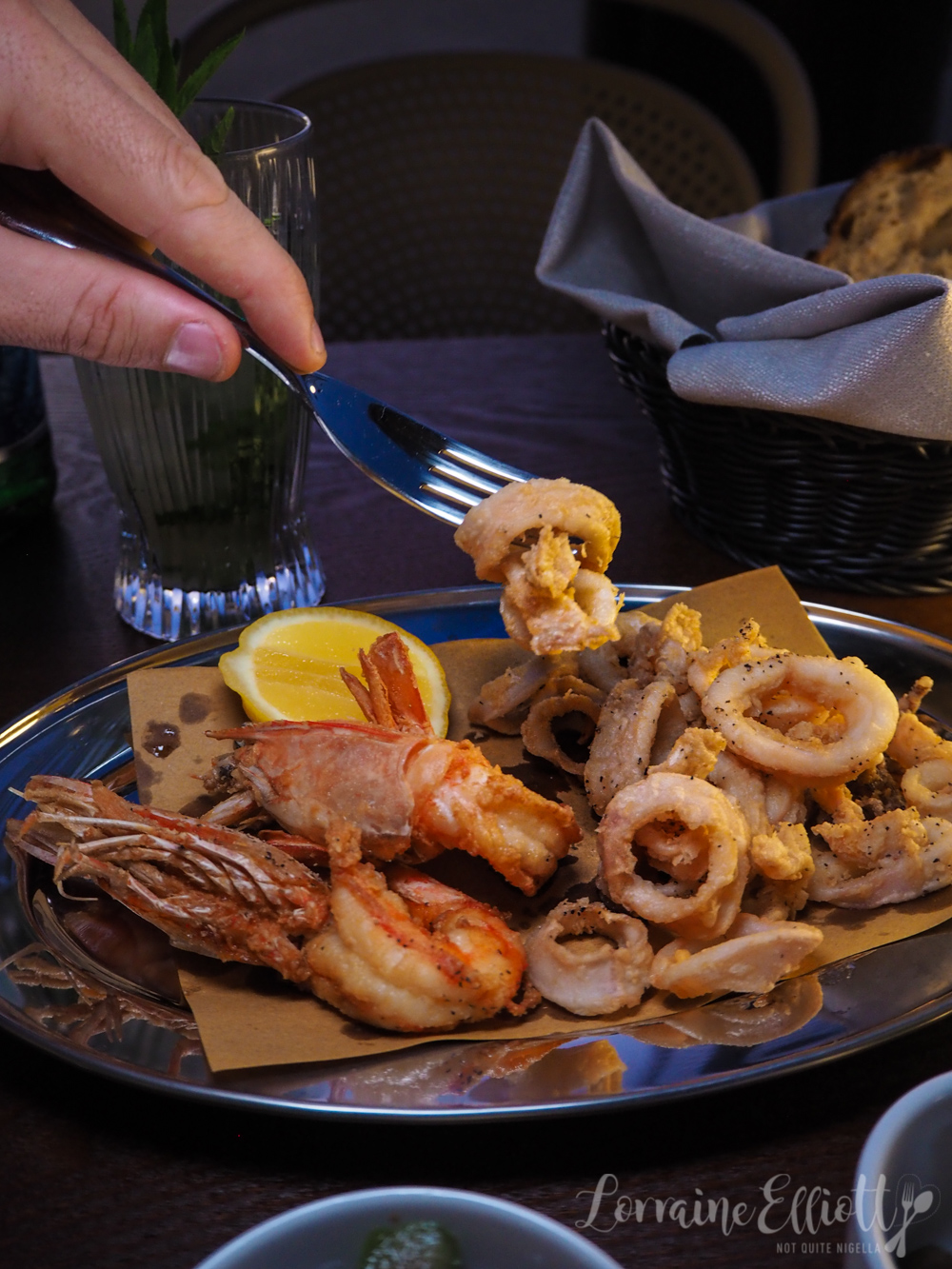 I was tempted by the Neapolitan classic Mozzarella en Carrozza but Mario suggested the fried seafood instead. The fried seafood today is prawns and squid. They're both lightly dusted in flour and then fried until lightly golden. The squid is good but the prawns are lusciously excellent. 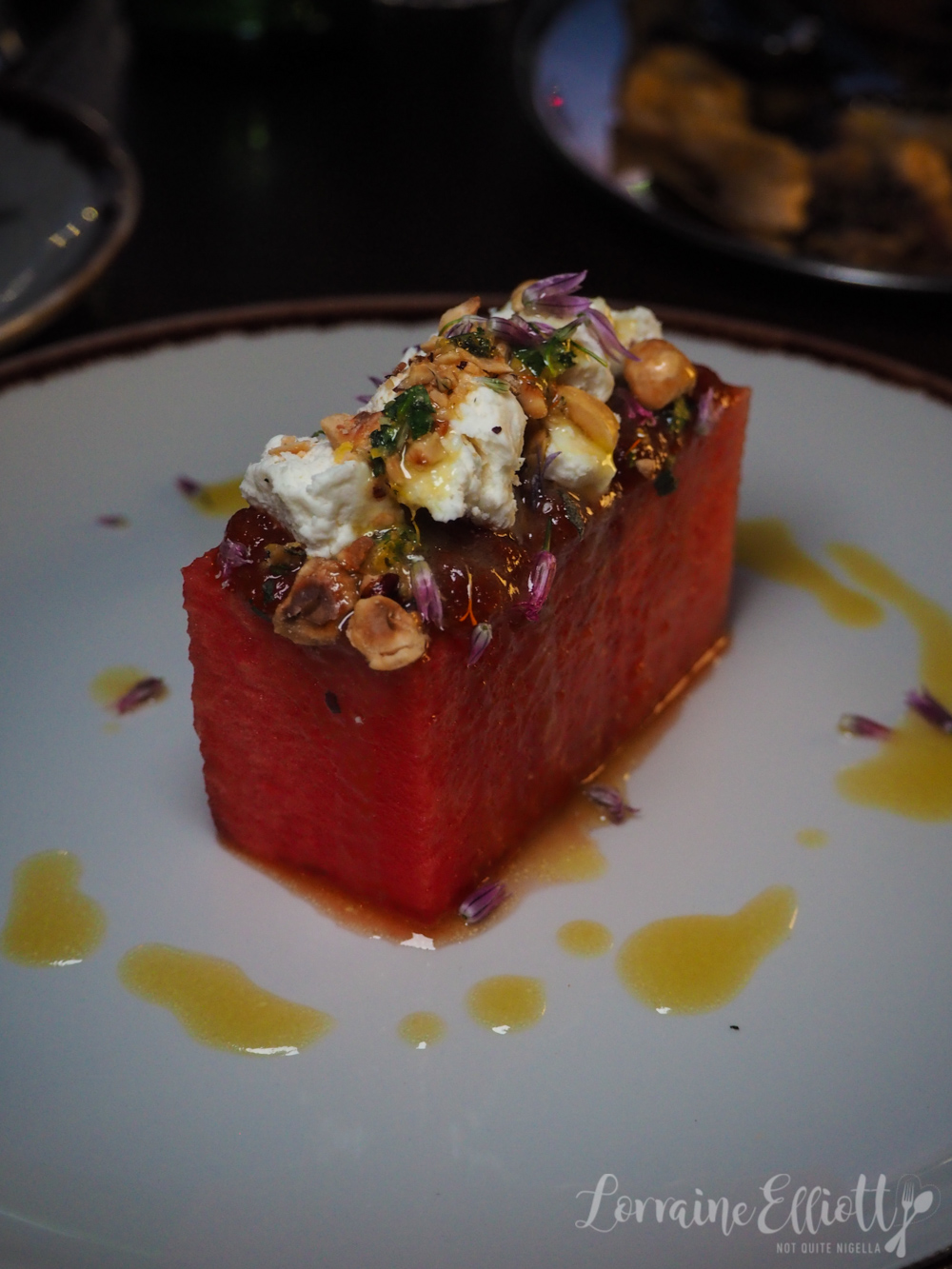 We went with chef Mario's recommendations and he suggested following the fried seafood with the watermelon as a palate cleanser. It's a rectangular block of molasses coated watermelon topped with crumbled goat's cheese. It's simple but refreshing and does the trick of refreshing our palates for the pastas. 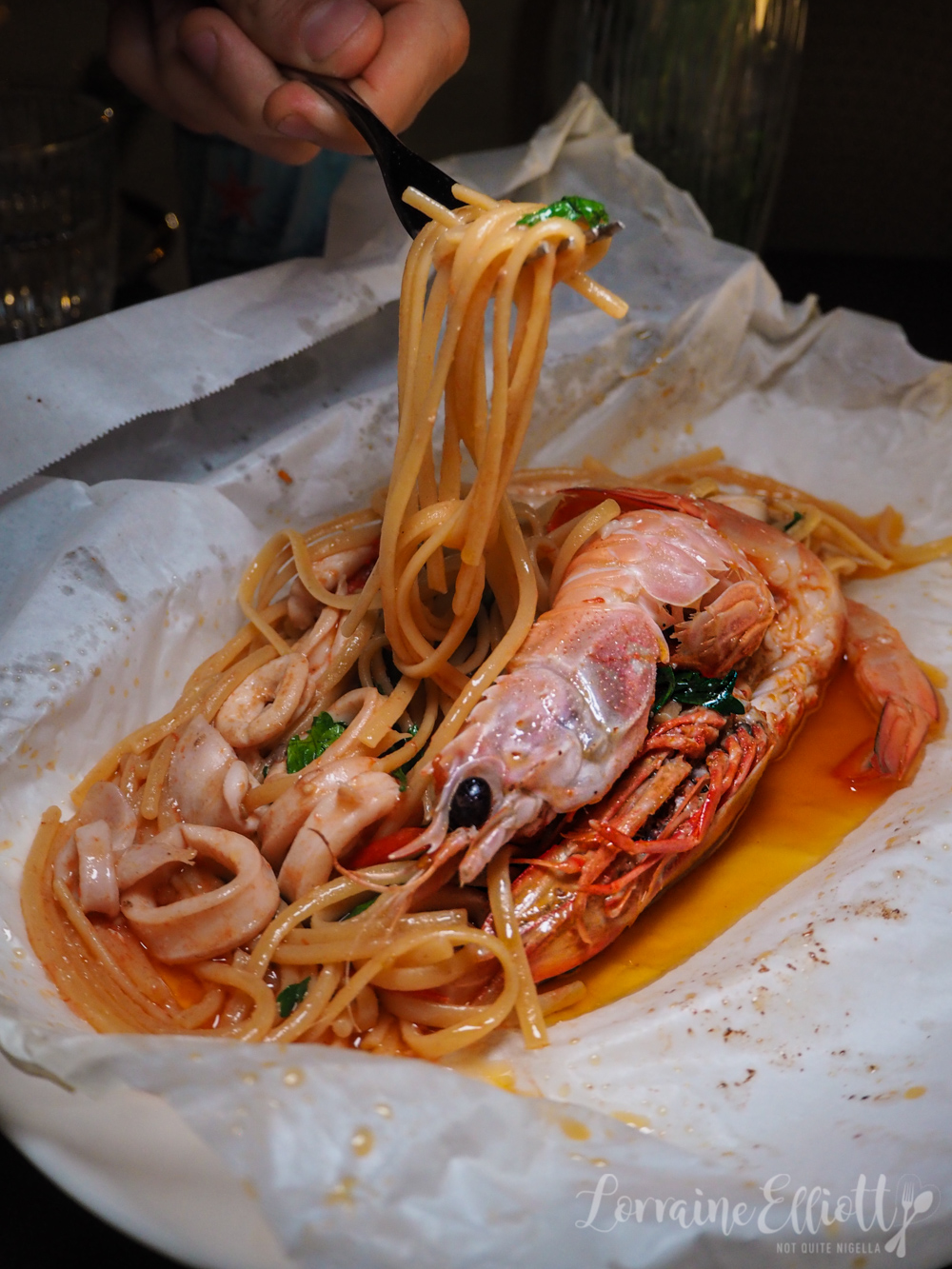 Mario's signature dish and creation is the Linguine al Cartoccio. Here it is cooked in foil and then finished off in a parchment bag that they open at the table. Inside there is linguine with a tomato based sauce. There are three enormous shelled prawns that are luscious and perfectly cooked and each pasta dish is big enough to serve two. And that sauce! I had to ask the type of olive oil they use (it's a superbly buttery extra virgin olive oil by La Masseria from Italy). You'll definitely want to save some bread for this sauce. I contemplate coming back for some more of this the next night (alas we already have plans!). 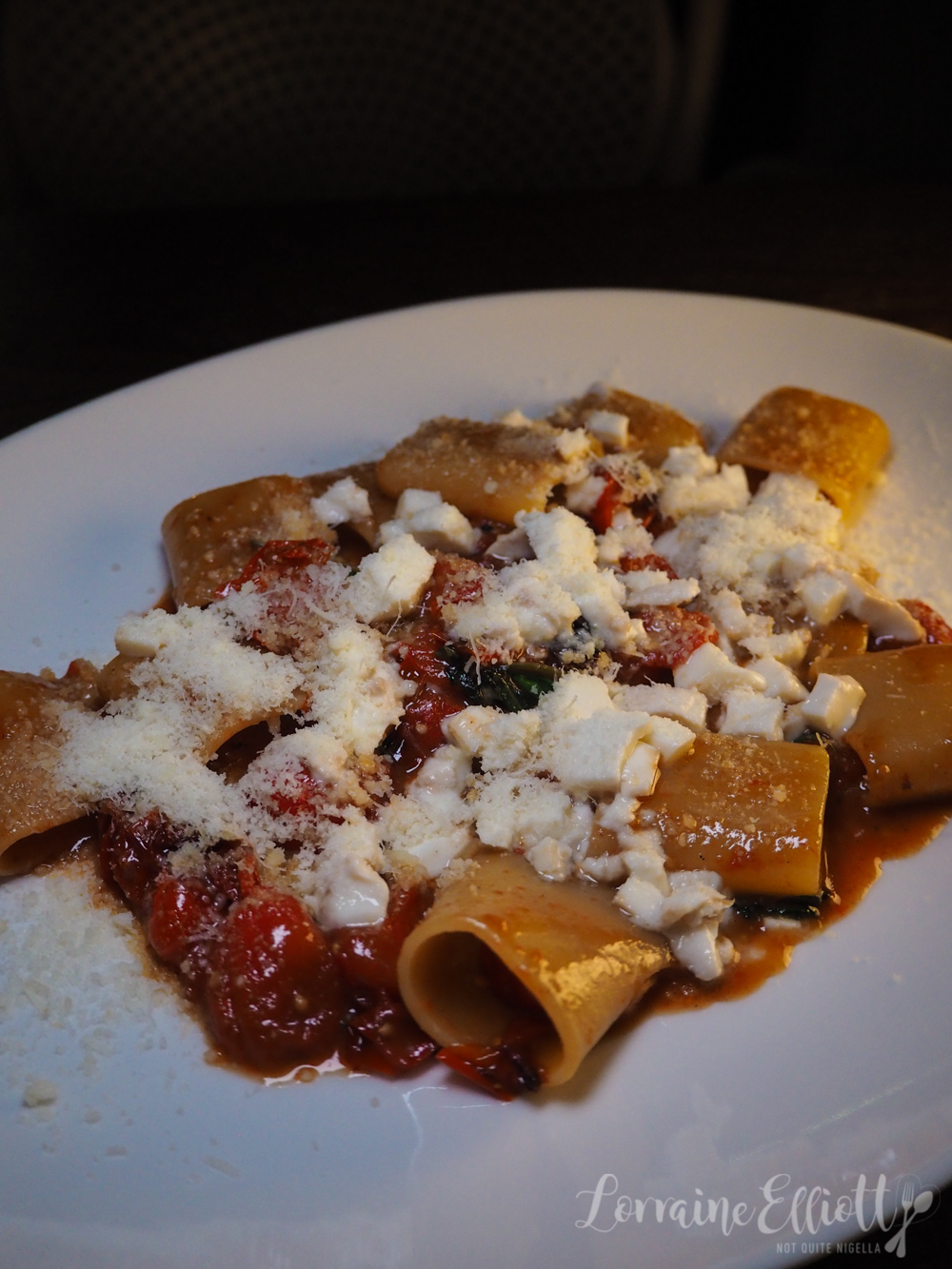 You'd think that the paccheri following might be a bit of a runner up prize but it is delightful in its own right. It's large tube pasta cooked al dente with a Sorrentina sauce made with soft, sweet cherry tomatoes, basil and cubes of smoked mozzarella. This is so simple but so divine and relies on the sweet tomatoes and gently smoked mozzarella cheese. 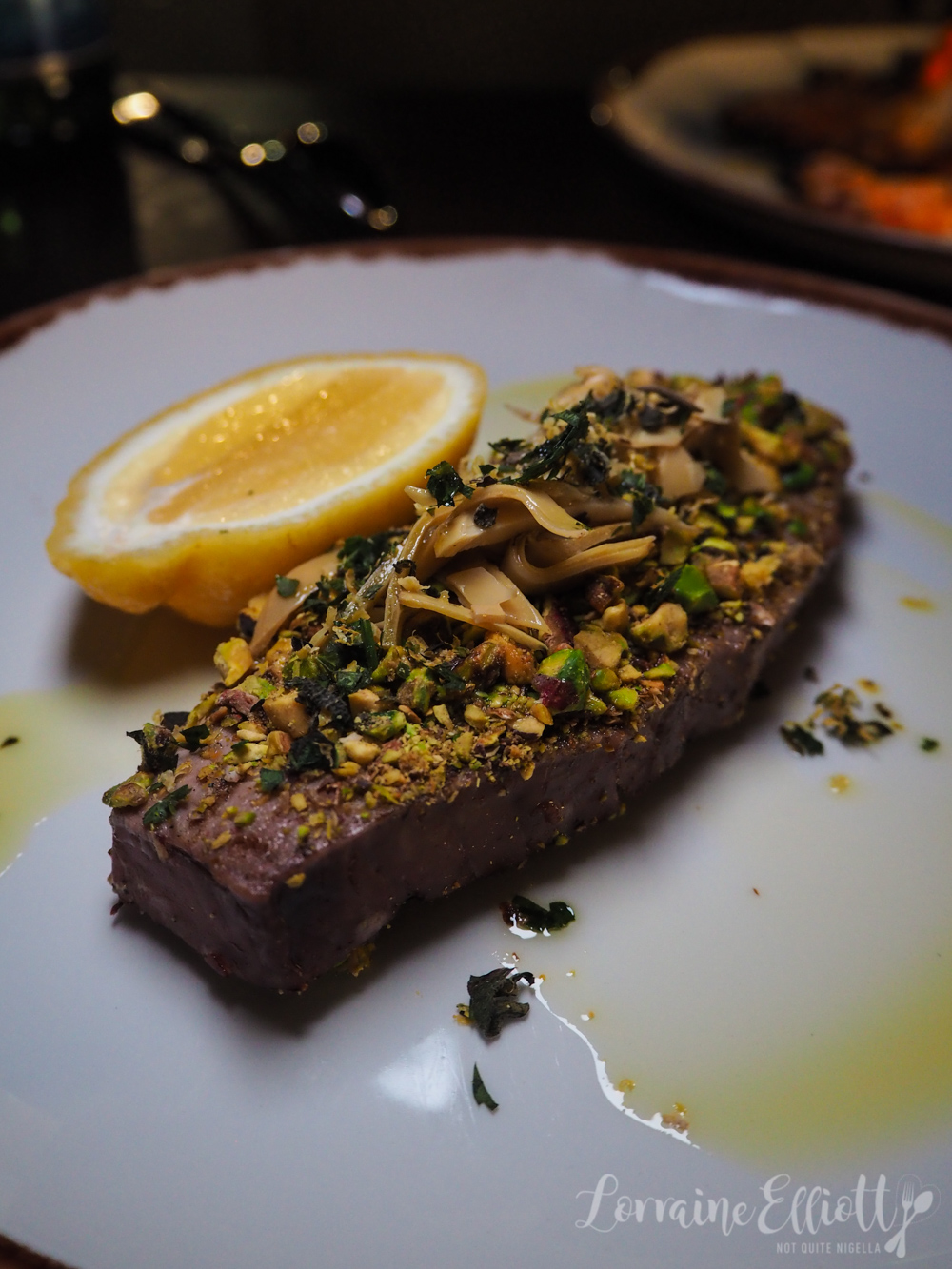 Given that the pastas could have conceivably fed two people mains aren't even needed but we were on a roll. We ordered two seafood dishes for our main and the first is a tuna and pistachio dish that is seared on the outside and pink on the inside. It's light with an appealing crunchiness from the pistachio topping. I would happily order this again. 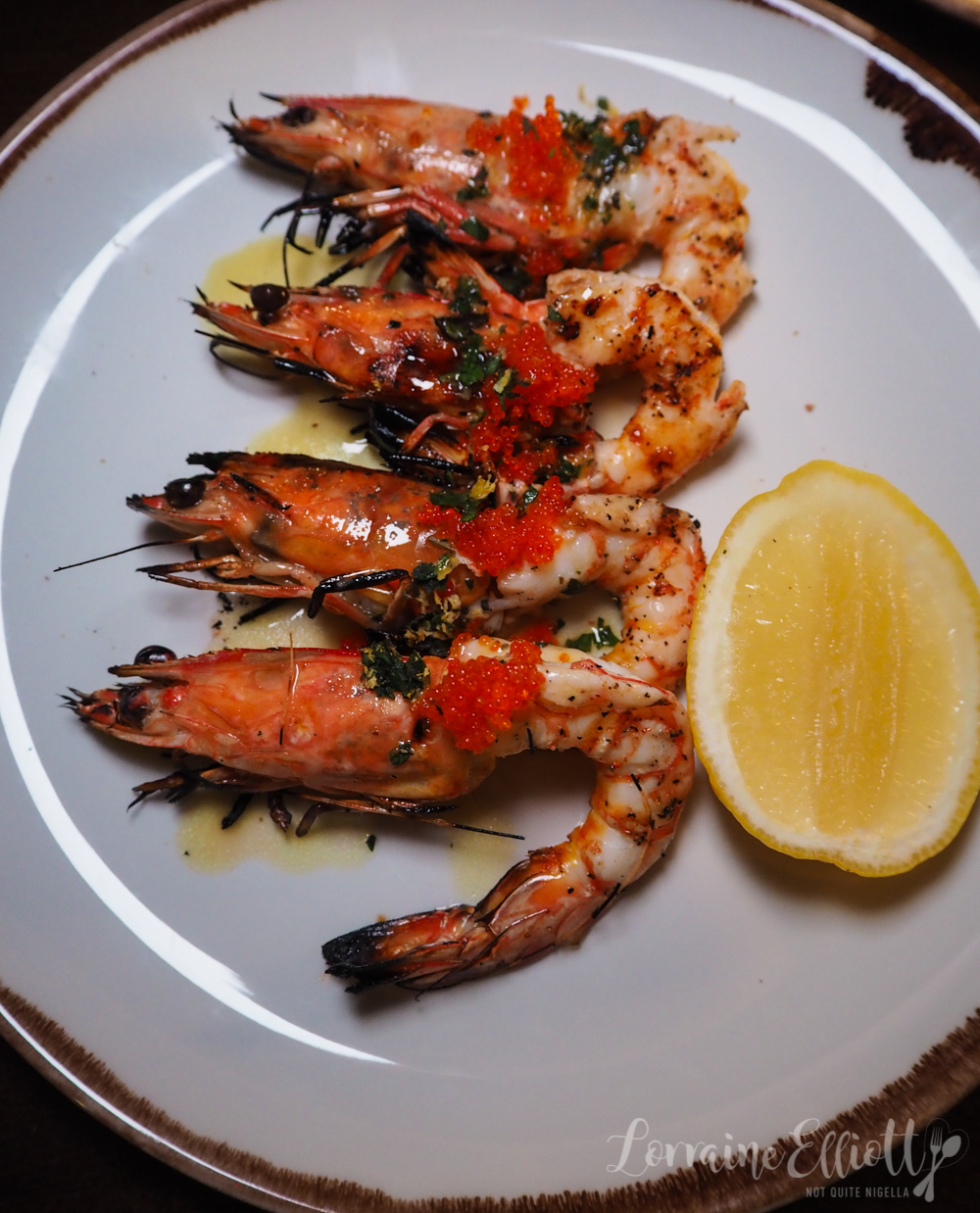 Likewise the prawns topped with gremolata, lemon dressing and tobiko have that luscious texture of perfectly cooked prawns and is a lighter style of main, perfect to follow the pastas. 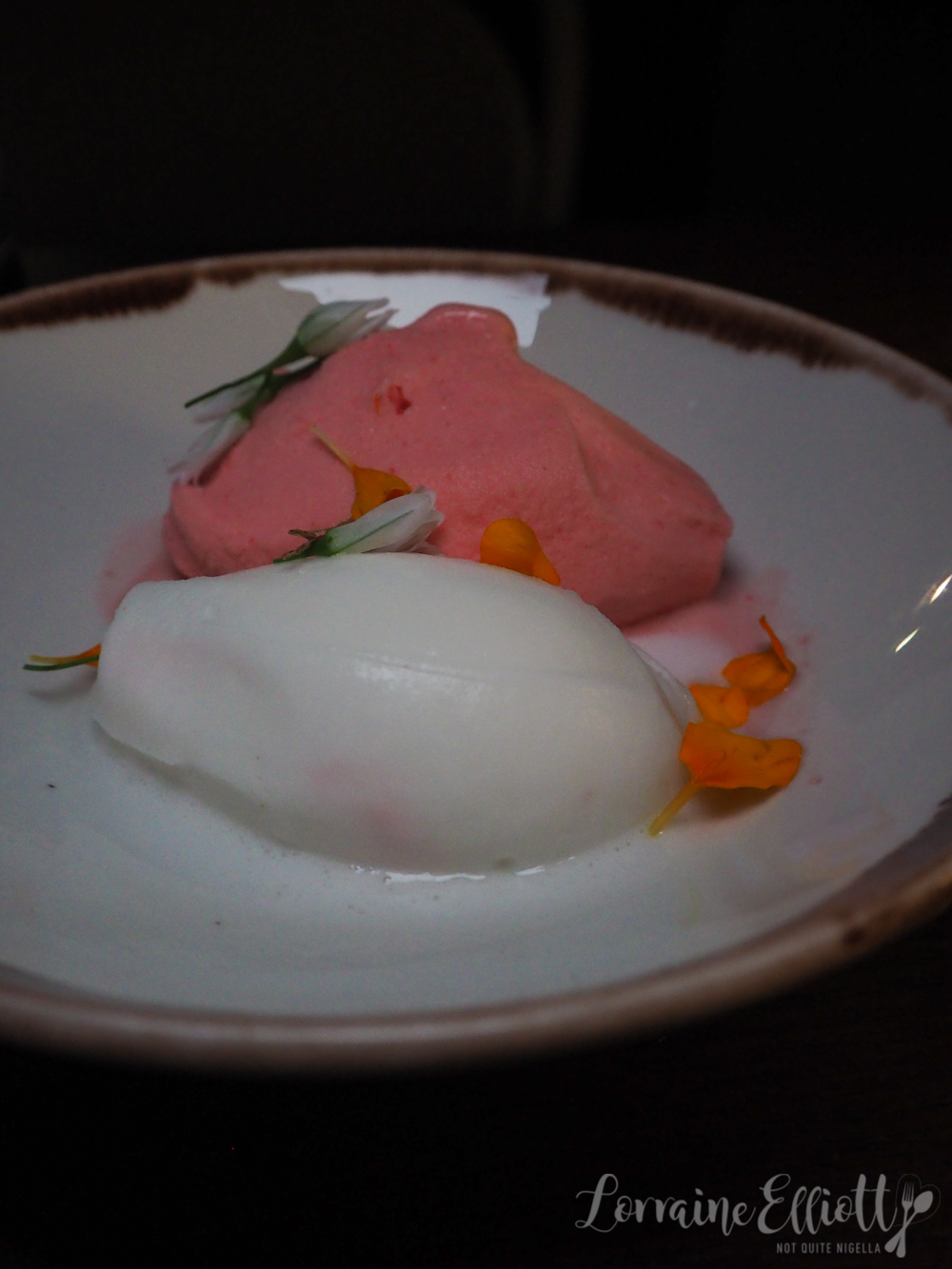 For the time being there are three desserts on the dessert menu (a new dessert menu is being developed). There's a sfoglitatelle lobster tail pastry, sorbet and an Italian cheese plate. Mr NQN is delighted with the raspberry and lemon sorbets that taste just like the freshest fruit and he is reluctant to share. Which is fine by me because I don't want to share the sfogliatelle. 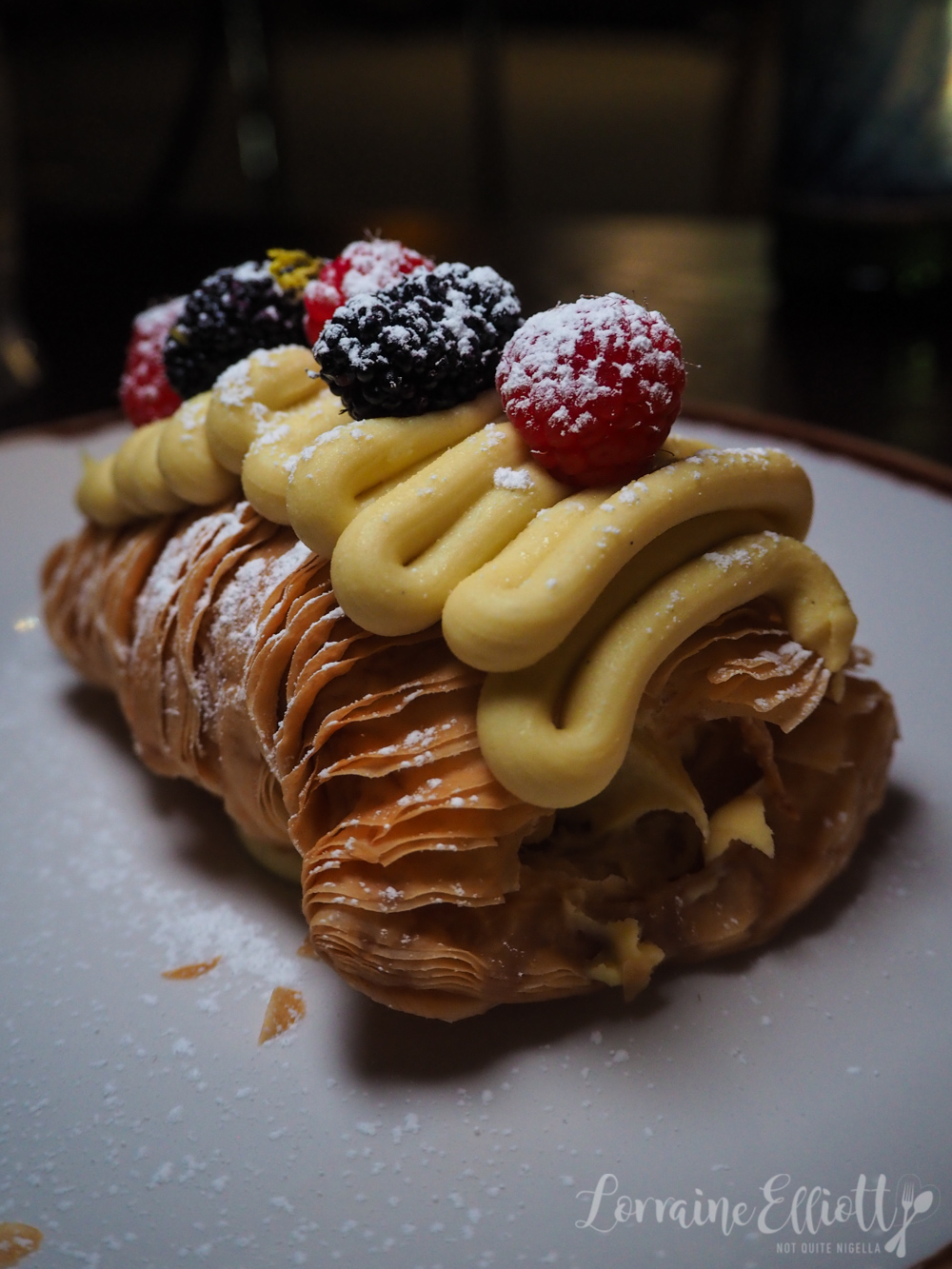 I love sfogliatelle, a Neapolitan layered pastry that tests any pastry makers' skill. The word means "little leaves" referencing the pastry's intricate layers. This sfogliatelle is enormous and stuffed to the brim with a perfectly sweetened whipped cream with crème patissiere and fresh berries. I lament the lack of stomach space to finish this whole thing as the pastry is earth shatteringly crunchy, the cream and custard so soft and divine. "Would you like me to pack this up for you?" asks our waitress. For the sake of self restraint I decline but the next morning instantly regret it. In fact I can't stop thinking about it for the following few days.

So tell me Dear Reader, have you ever tried a sfogliatelle? Do you always order four courses at an Italian restaurant or do you stick to two or three?