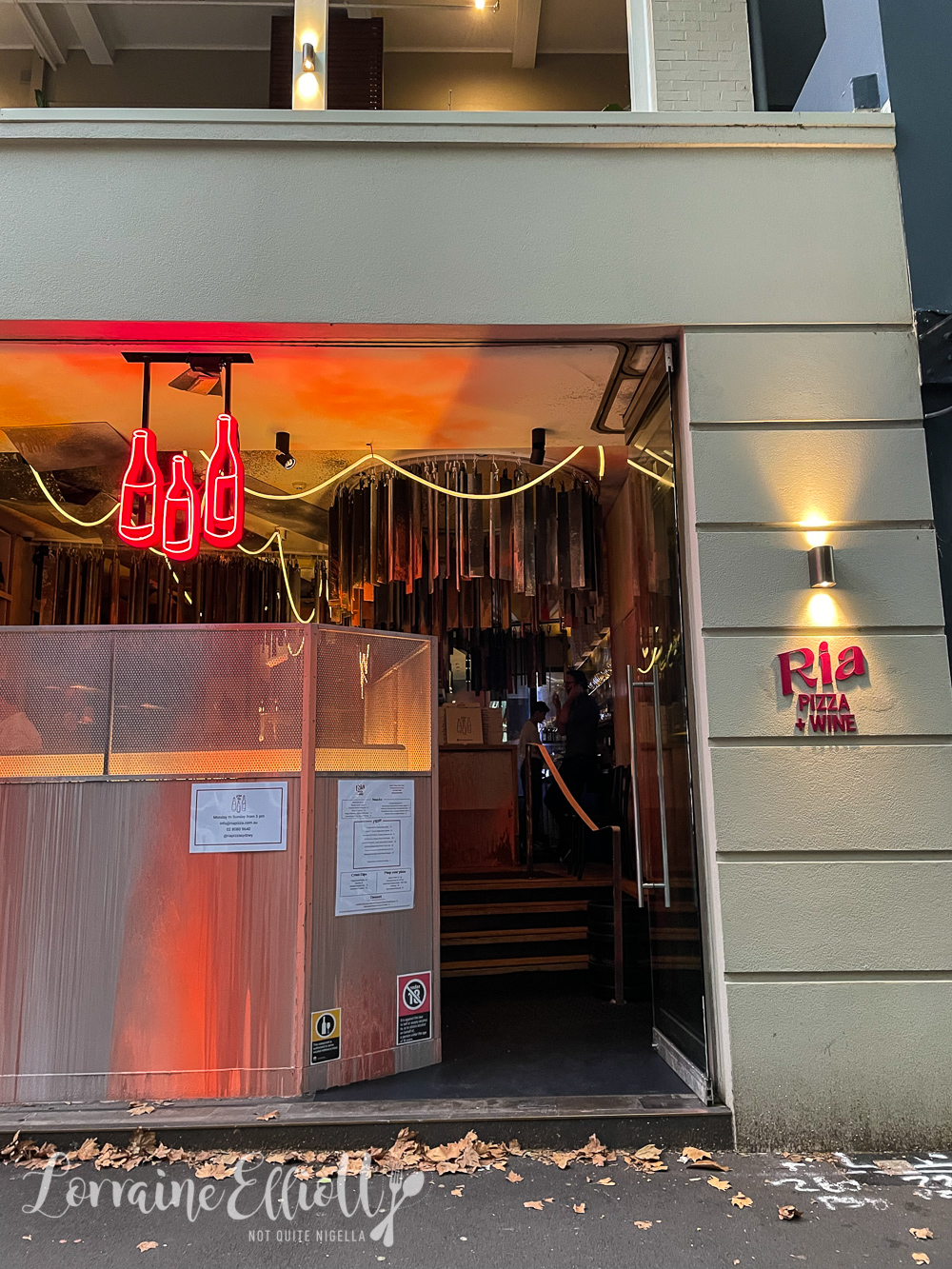 Ria Pizza & Wine is the latest opening from the team behind Bentley Bar and Monopole. Here sourdough pizza bases are combined with novel topping combinations and an extensive wine list. There are also pizza crust dipping sauces available as well as an option to pimp your pizza with black truffle, bottarga or beluga caviar.

It's a glorious night right at the tail end of Summer and nothing makes me look forward to the weekend more than a Friday night date, especially a pizza date with Mr NQN, Monica and Marco. The space is warmly lit but industrial with hanging paint splattered decorations that look like wooden slats. 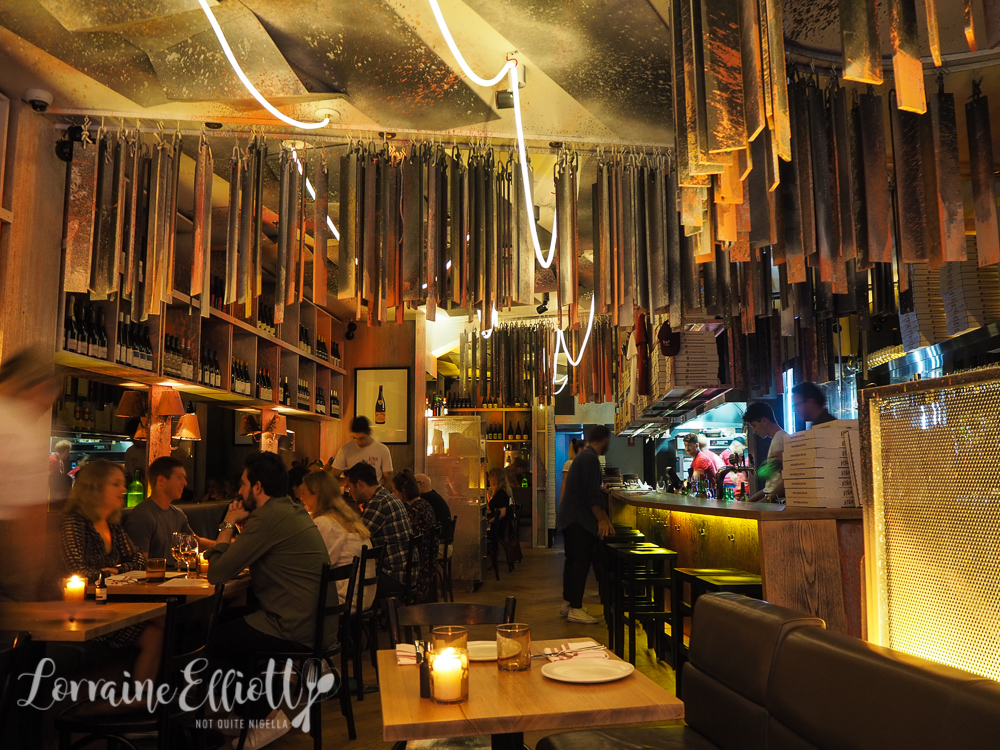 The Bentley Group are responsible for the vegetarian restaurant Yellow, the waterfront Cirrus and Bentley and Ria sits where Monopole used to. The pizza here has a sourdough biga base where the initial biga is fermented for 36 hours before being mixed into a dough which is then rested for 24 hours. Ria Pizza's pizzaiolo Ruben Percoco is half Italian and half German and we have all been looking forward to trying the pizzas that have toppings that are a little different. 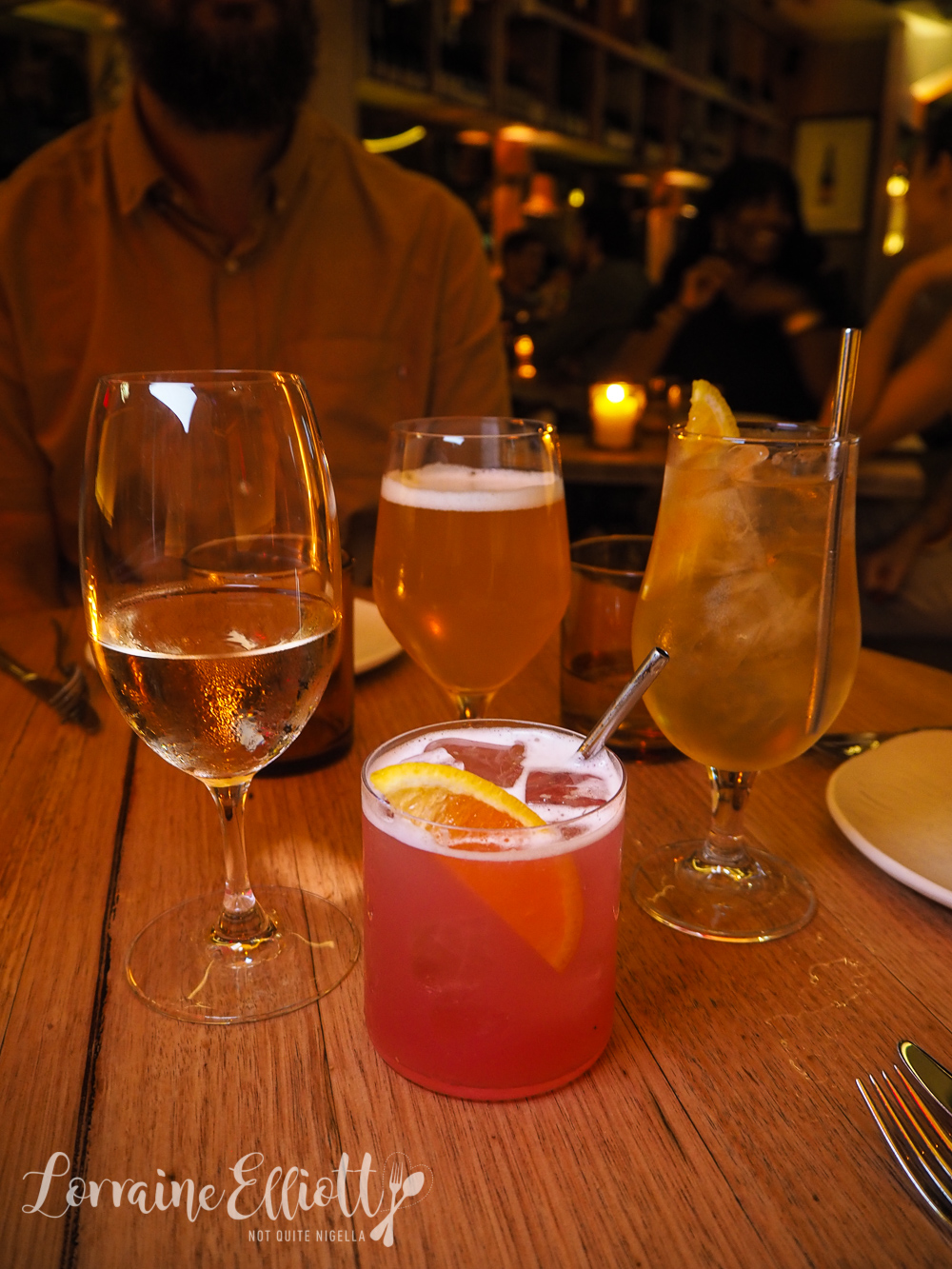 First things first: drinks. It's a wine from the detailed wine list of over 150 wines for Mr NQN, a beer for brewer Marco and a chamomile, lime and lychee iced tea for me. There's an entry on the menu called "Mocktail" and Monica enquires about it. They explain that the bartender will make anything to your taste. Monica asks for a negroni in a mocktail and they return with a pink lemonade sort of drink. It's definitely nothing like a negroni but it's tasty and sweet and sour. "I feel like I just ordered a pink lemonade at Denny's" quips Monica. 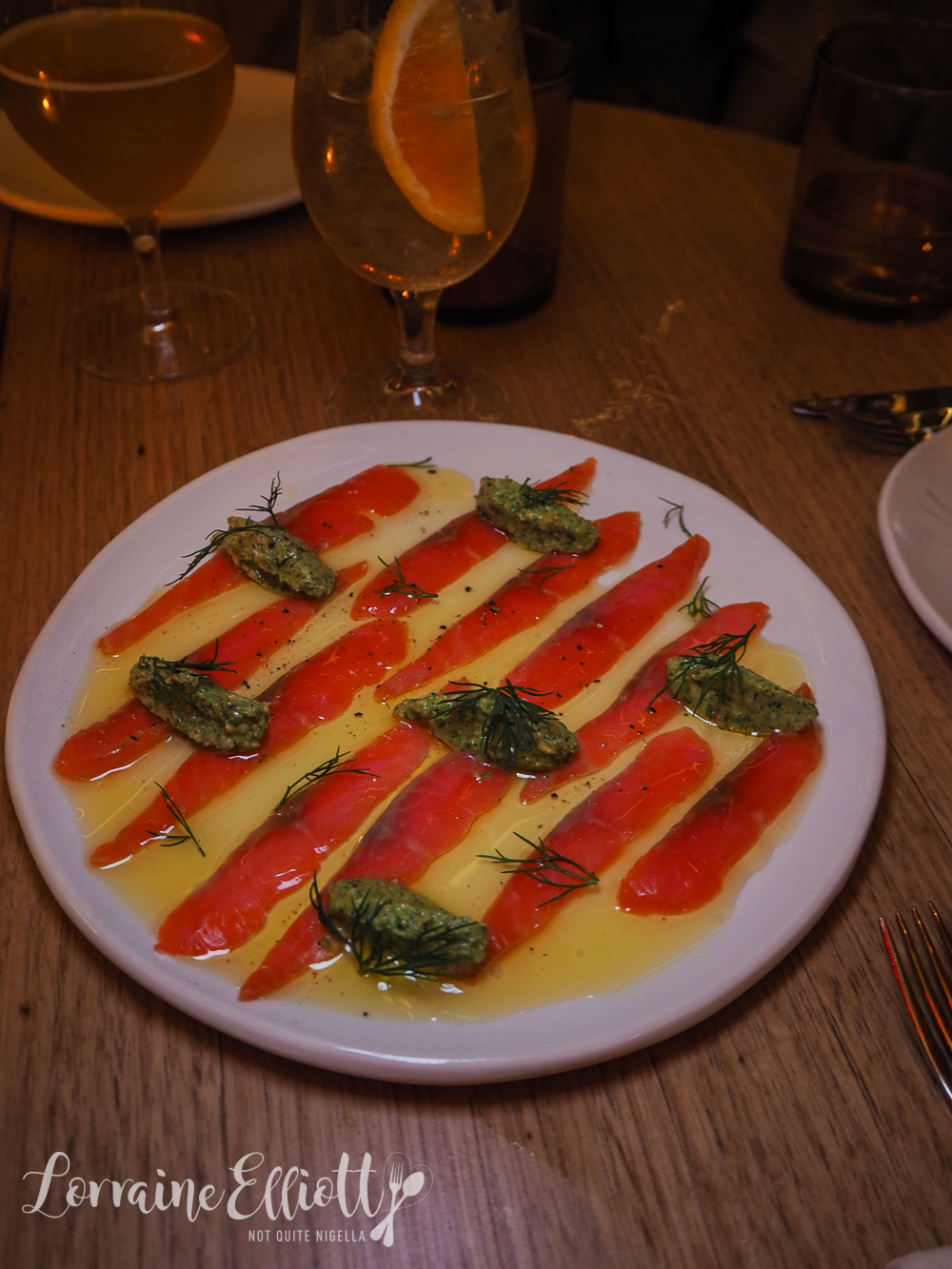 We are sharing a couple of starters and then four pizzas. The cured ocean trout comes as thin slices bathed in a lemony extra virgin olive oil infused with quenelles of sauce Gribiche, one of my favourite sauces with seafood made with chopped boiled eggs. This is a gorgeous entree, luscious and moreish the ocean trout silky in texture. 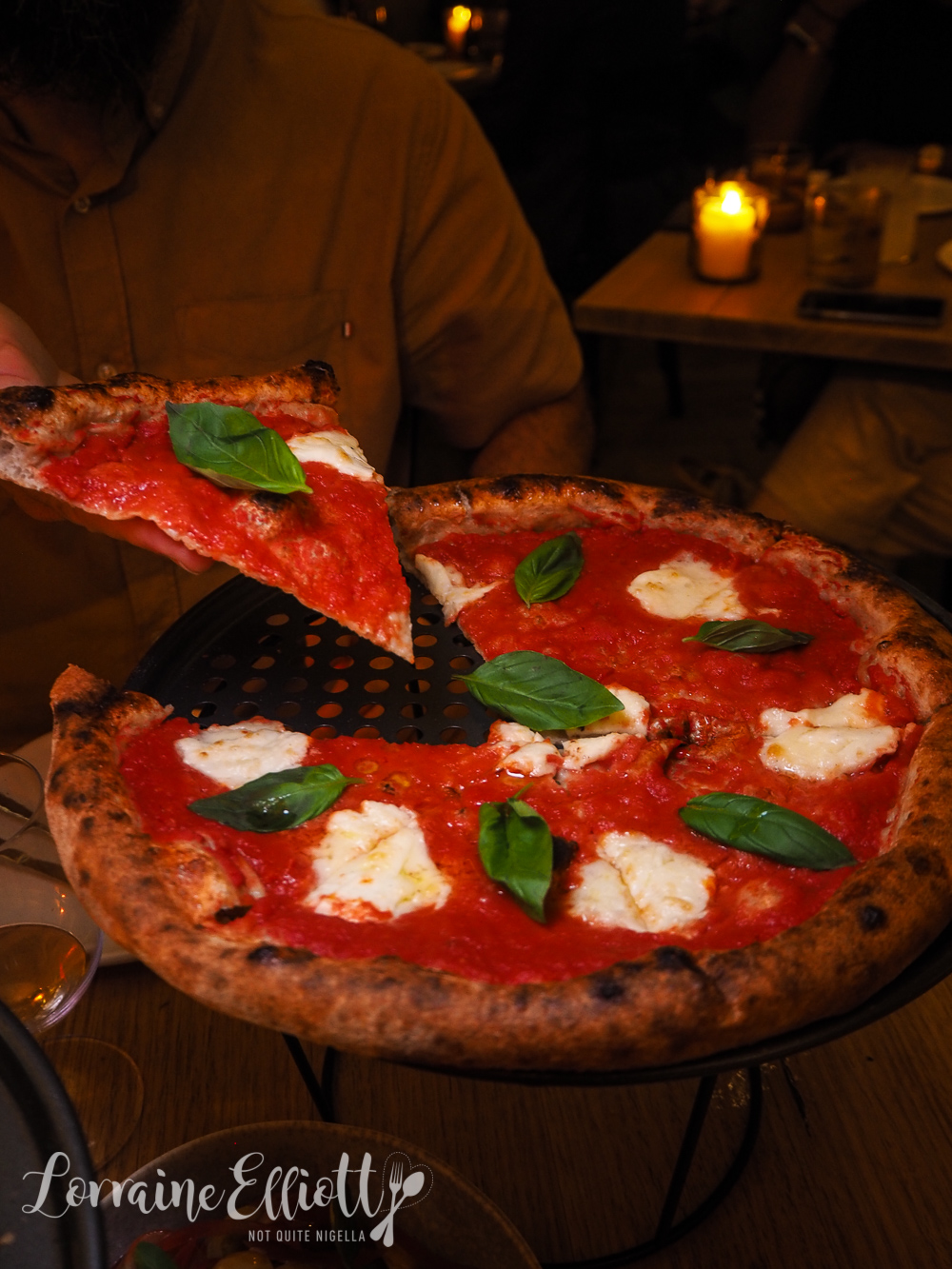 Our first two pizzas come out with our side salad. The tomato, buffalo mozzarella and basil pizza is everyone's favourite. The tomato sauce is en pointe and you can always tell when they use buffalo mozzarella because the cheese is just so much better when there's nowhere to hide with other flavours.

The base is good, very good in fact and passes the approval of proud Italians Monica and Marco who currently happen to be missing Italy so much that their heart hurts. The pizza base has a thin base and a puffy crust. 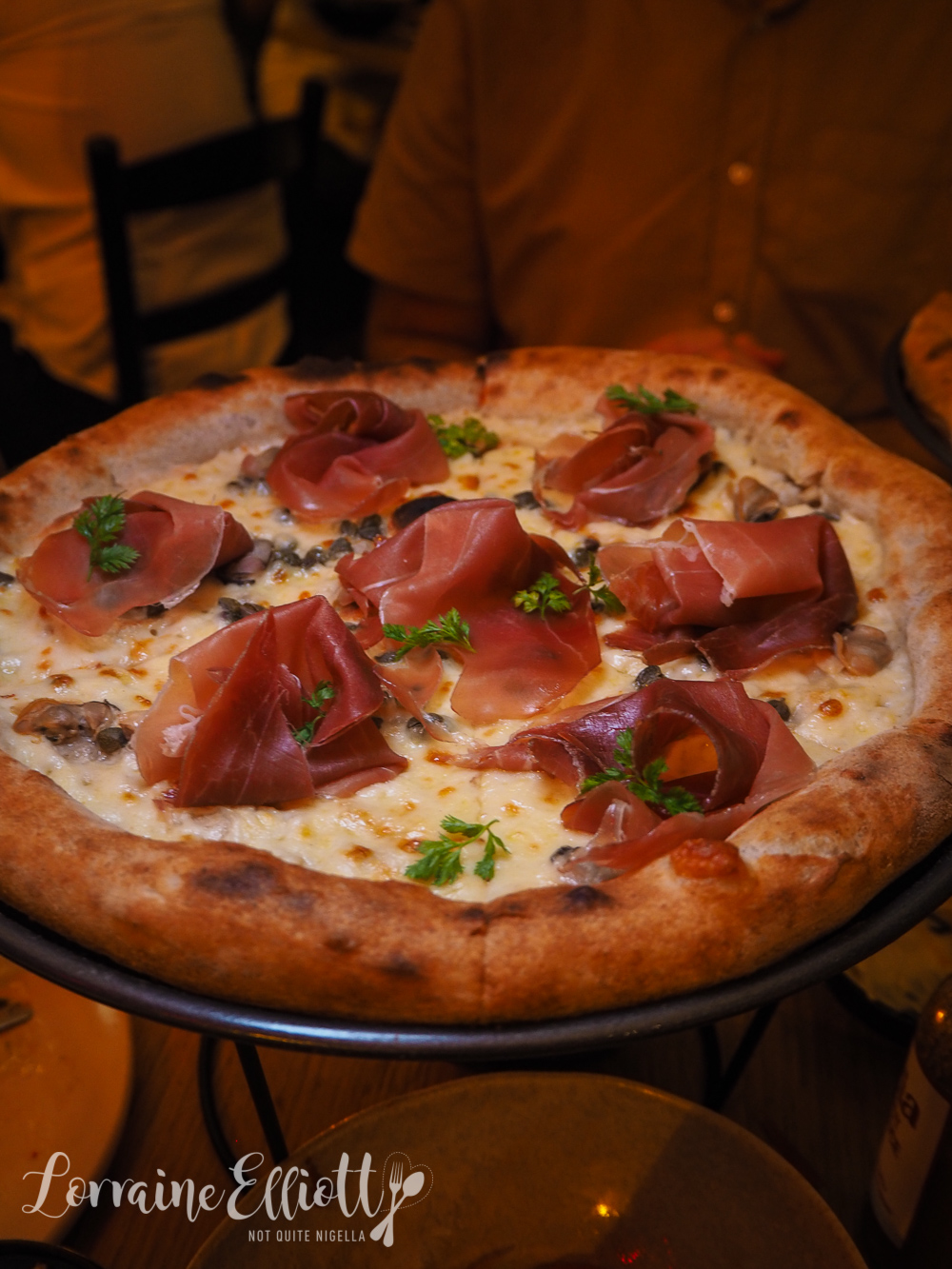 The clam pizza sounds promising but there's a surprise addition of capers but they're tiny little powerhouses of flavour that take over a dish and while there are tiny clams there aren't quite enough to announce their presence. Mr NQN didn't even realise that there were clams on this pizza. 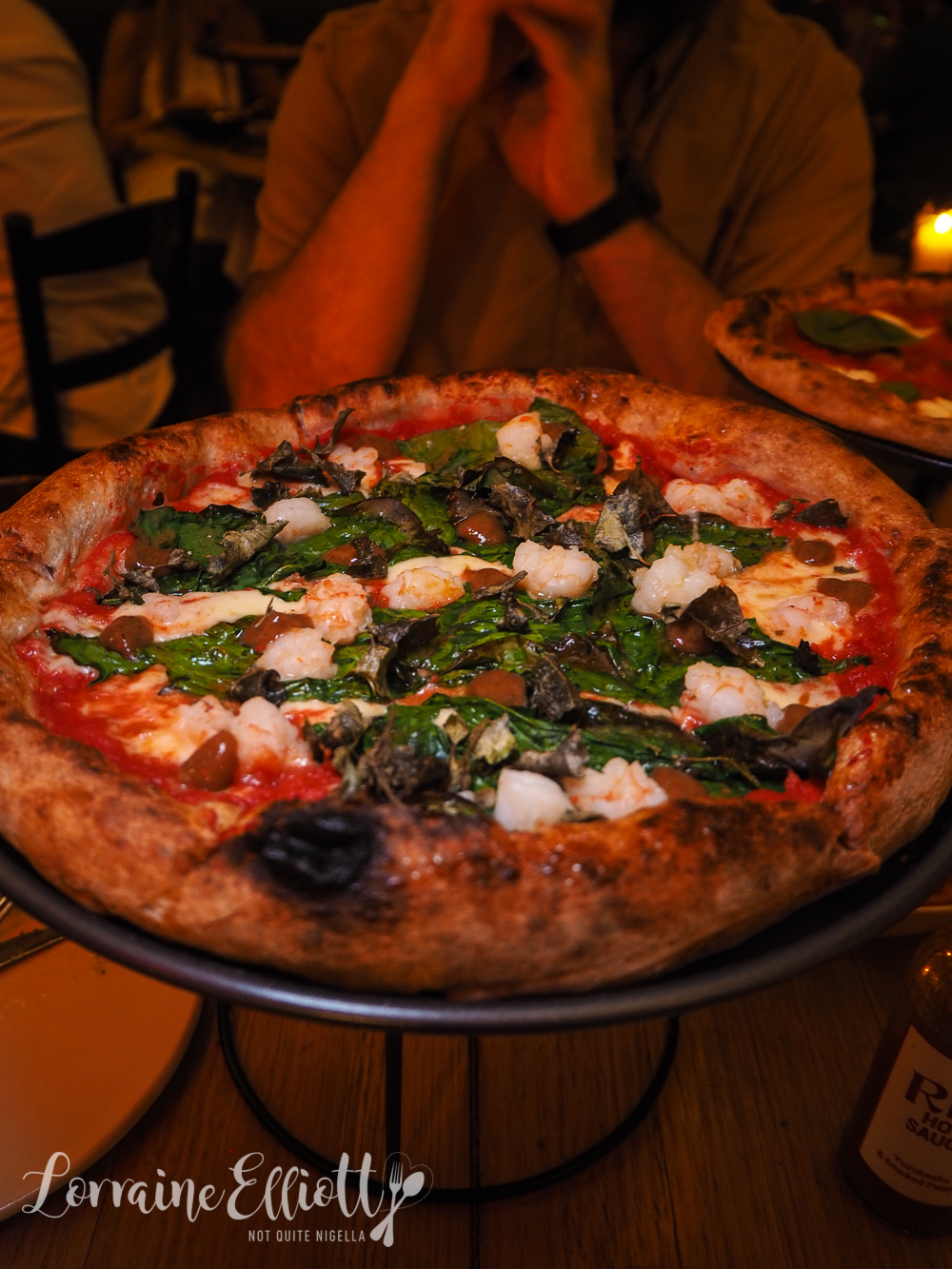 The Northern Queensland prawn is chopped up prawns on a tomato base with saltbush leaves and XO sauce. The saltbush is served as blanket sheets of it rather than being chopped up and that is the dominant flavour over everything else. The XO sauce isn't readily apparent against the saltbush and comes in silky textured taupe coloured dabs. 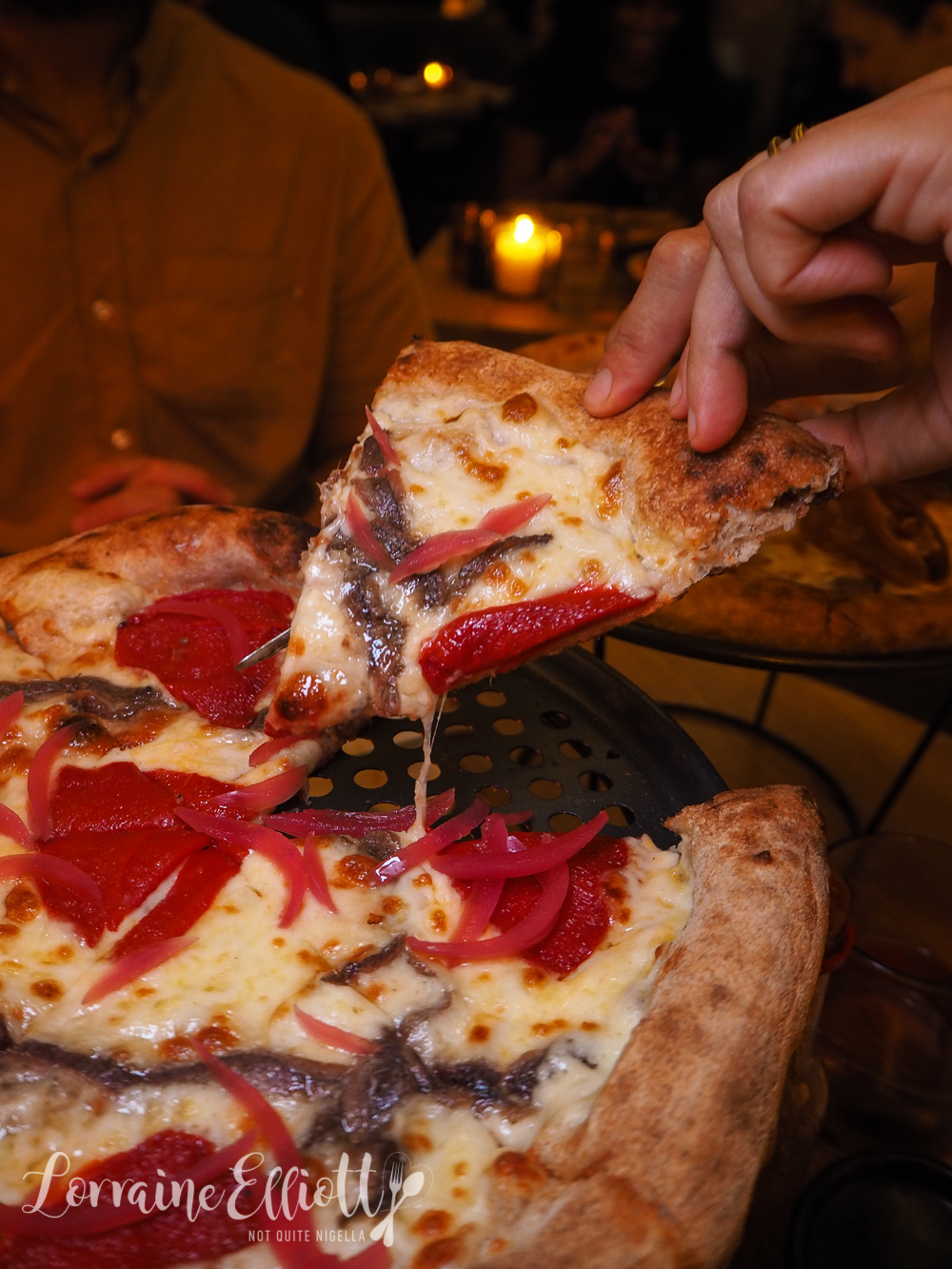 As anchovy lovers we rounded out our pizza selection with an anchovy pizza with red piquillo pepper. This is another pizza with a surprise bechamel base (we were told that they were white pizzas). They've topped it with a generous amount of Oasagasti anchovies and skinless roasted red piquillo peppers and red onion pickles. The anchovies have been cooked onto the pizza so that they lose their texture and they end up tasting like less stellar anchovies and we would have added them raw. Also you need to get a bite of all three toppings to get the full effect but they're spread out on the pizza so you either get a bite of anchovy or pepper or onion. 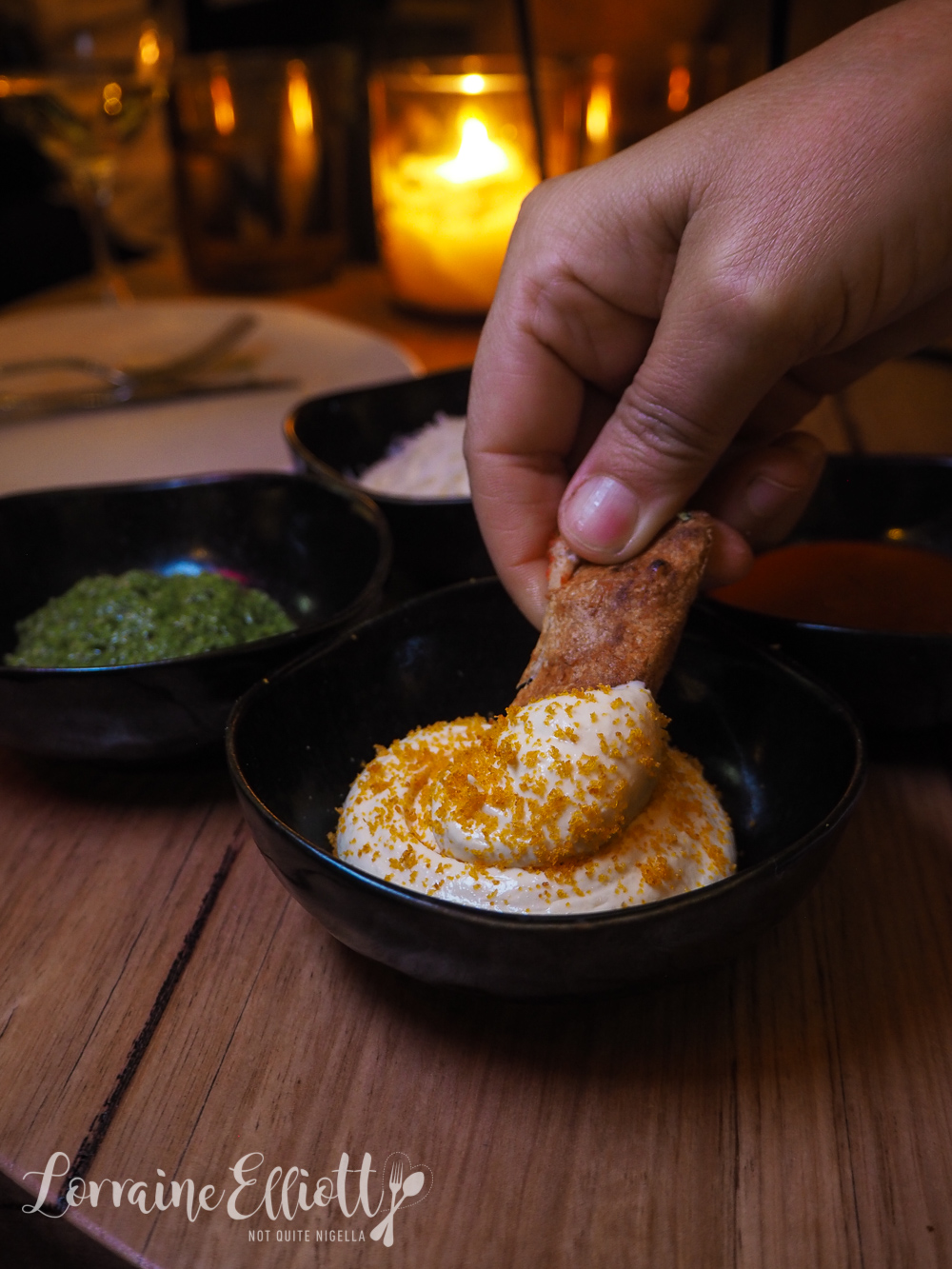 We abstained from pimping our pizzas but we did order all of the crust dips which are kind of a genius idea. There are four available and we tried all four because I'm a crust gal and these crusts are so puffy and light and just begging for a crust dip. The whipped mullet roe is the clear favourite of all four of them. The parmesan custard is actually very mild flavoured all things considering and harissa and pesto are fine but pale against that delicious whipped mullet roe.

Also interestingly when I ask for chilli oil they either bring us hot sauce or fresh large mild chillies, neither of which really hit the spot like a classic spicy chilli oil. The hot sauce is nice and smoky but adds more flavour than you need to a pizza. 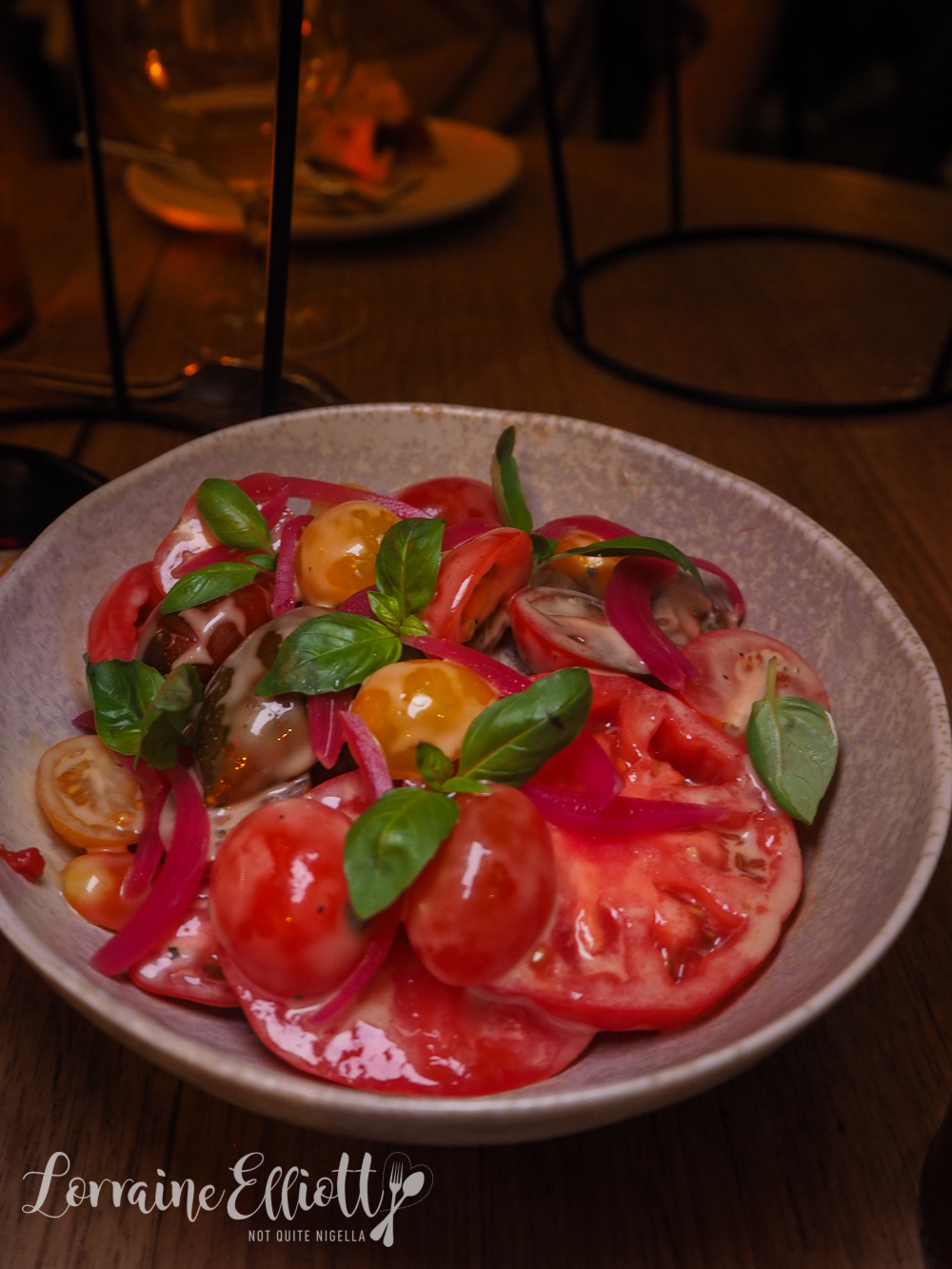 The heirloom tomato salad has a creamy, oily dressing on it which it really doesn't need as the tomatoes are lovely and in season now. 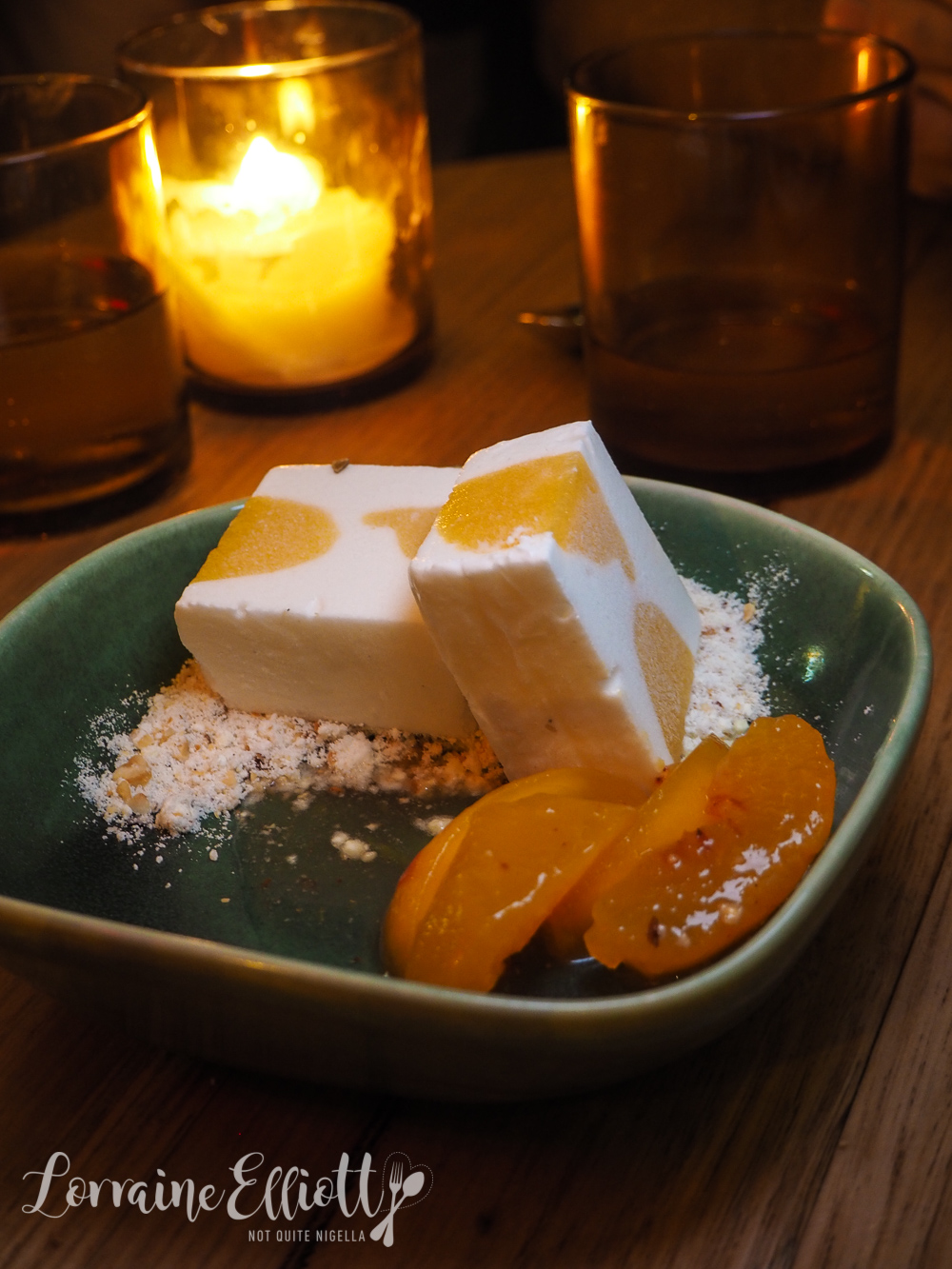 Dessert wise there are two choices, one vegan one and one non vegan. The vegan one is a coconut sorbet with peach accents and macerated peaches which are in season. It's nice but I adore the other cake. 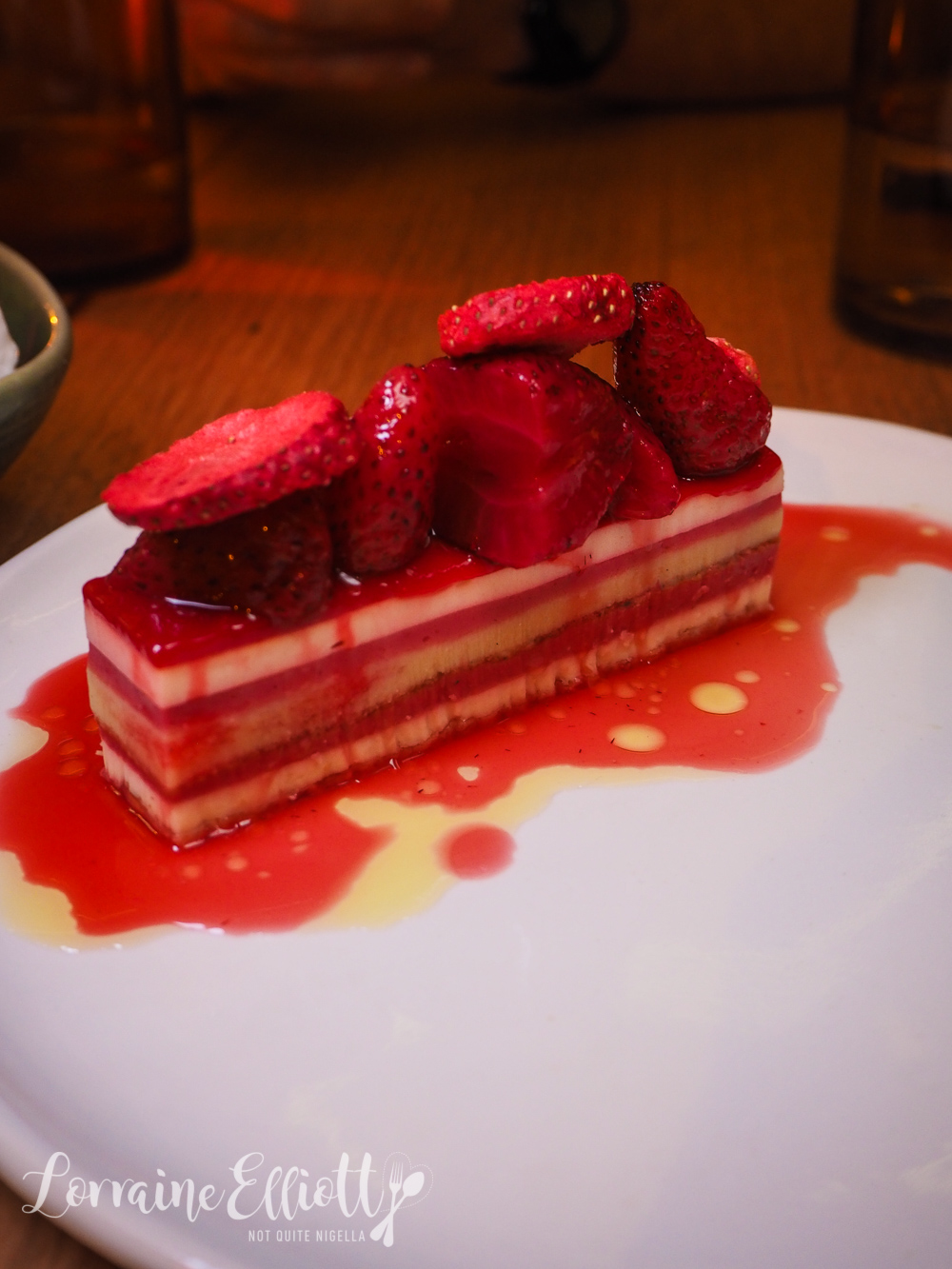 So tell me Dear Reader, do you prefer traditional pizza toppings or novel ones? And are you a red pizza or white pizza sort of person?