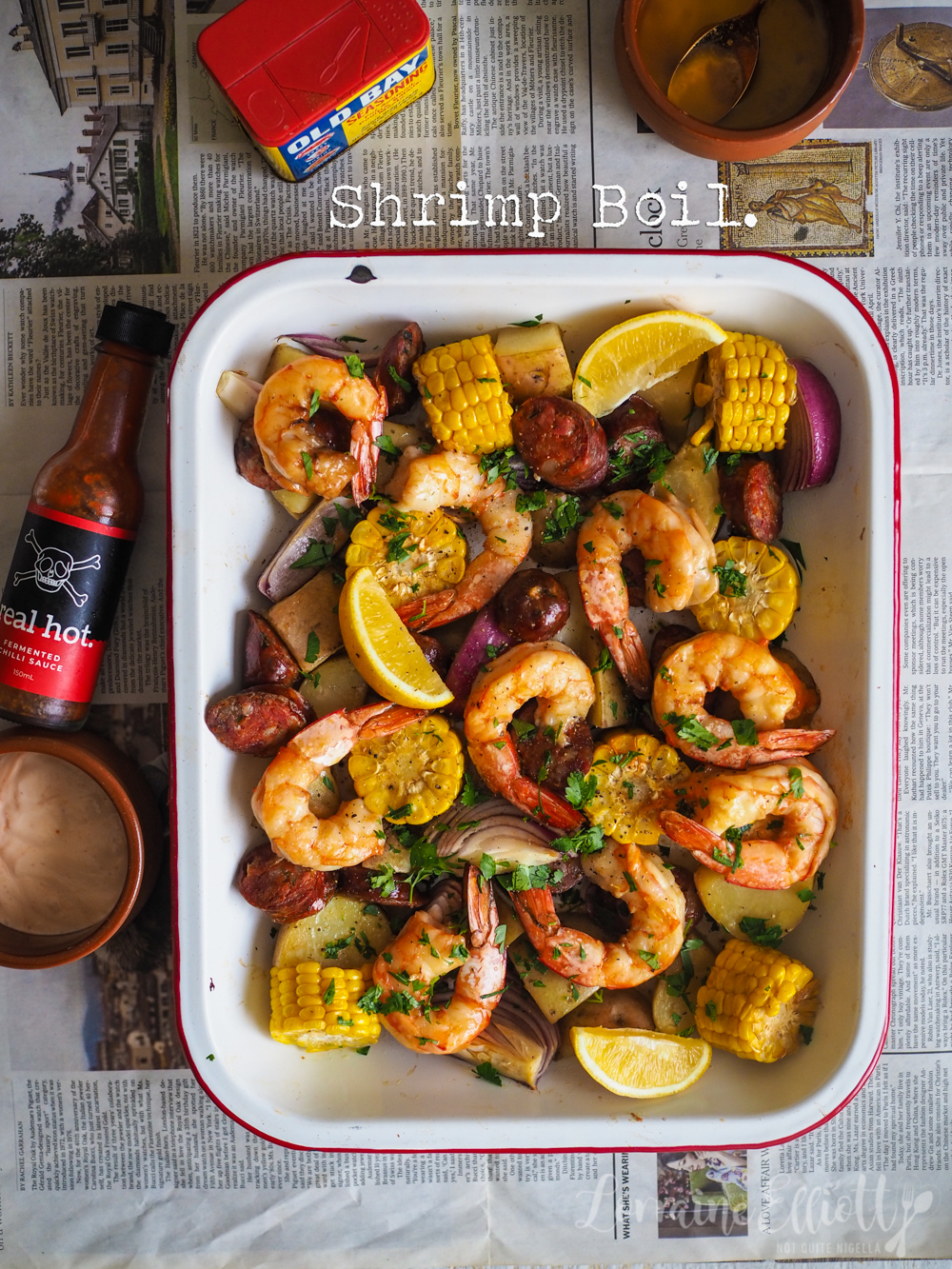 Shrimp boil aka a prawn or seafood boil is one of the easiest and most delicious tray bake dishes you can EVER whip up. It consists of placing everything in a big pot of seasoned water and boiling it up. It's served in a tray on a newspaper lined table and you dig in and dip your seafood, potatoes or corn in garlic butter! It's a fun group activity and perfect for warmer weather! This is a pushy recipe Dear Reader.

Shrimp boil is a thing that you see in the low country in the South of America, specifically Louisiana. It really is the perfect summer food and is fun to eat as well as delicious. Shrimp boil was said to come with the migration of the Cajun people (Acadians) from the maritime provinces of Canada to Louisiana. The history behind how the Cajun people came to be is fascinating and I remember learning about it when I visited Canada.

Acadia in Canada was a colony of New France and encompassed Nova Scotia, New Brunswick and Prince Edward Island. These French migrants were called Acadians. In 1710 the British captured Port Royal the capital of Acadia. Some Acadians who resisted pledging allegiance to Britain were banished to other countries and territories in the "Expulsion of the Acadians" and this happened in two waves eventually banishing politically neutral Acadians too. Some found a home in Louisiana and Acadians became Cajuns. Others say that shrimp boil was created by shrimper Richard Gay who threw some shrimp and bits in a pot of water and dubbed it the Frogmore Stew. 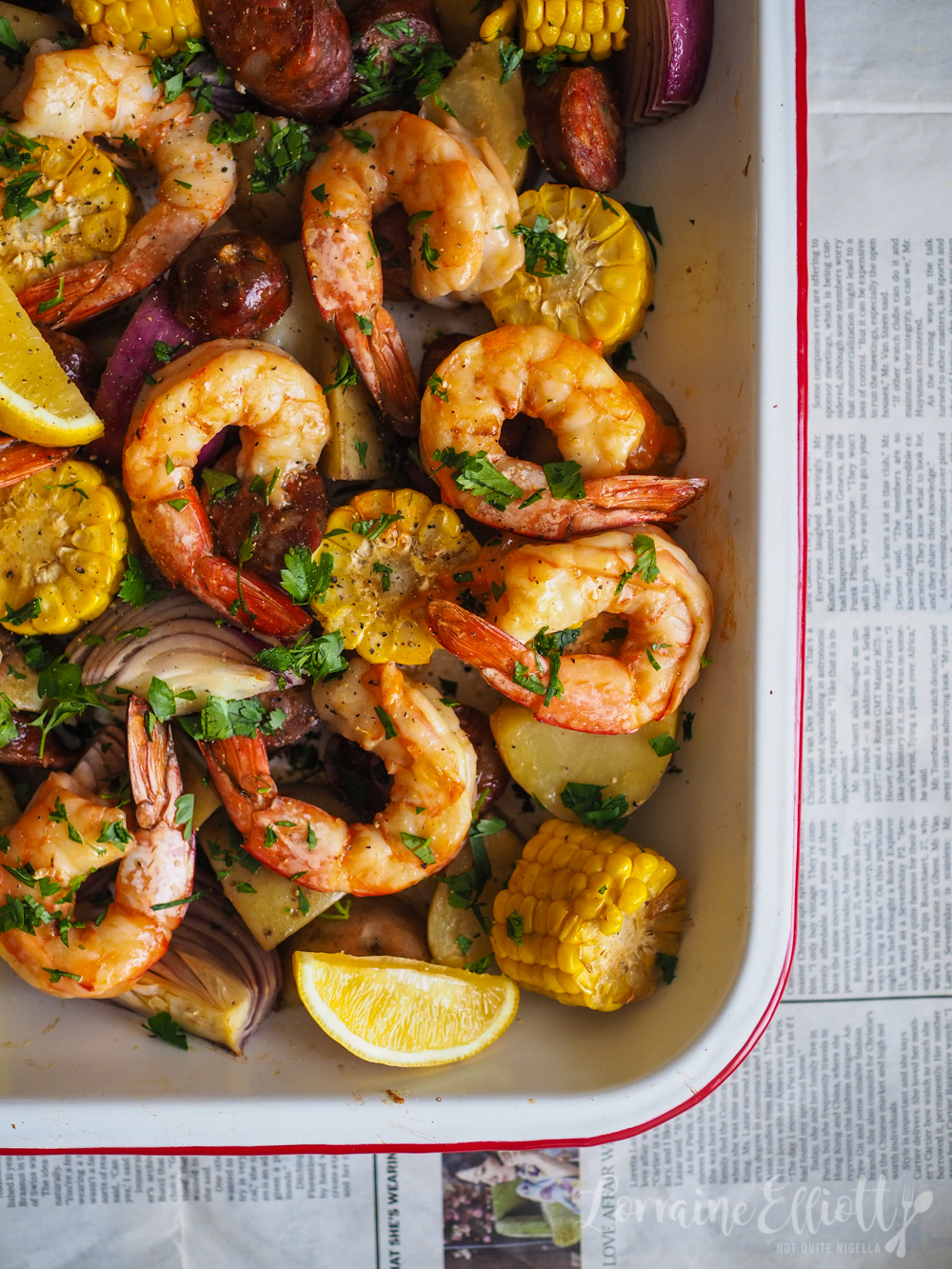 The whole idea of shrimp boil is to pop all of the ingredients (potatoes, corn, sausage and shrimp or prawns) in a pot of seasoned water and boil. It's simplicity itself and normally served on a newspaper laid table and eaten. I followed the traditional recipe but peeled the prawns first because it is easier to eat and I like the flavours to penetrate through to the prawn meat. Also some say that boiling onions make the shrimp too slippery to peel and starch from the potatoes can make the shrimp stick to the shells. I also finished this under a grill just so give it a bit of caramelisation (that's where the prawns cook too as they don't need long at all). 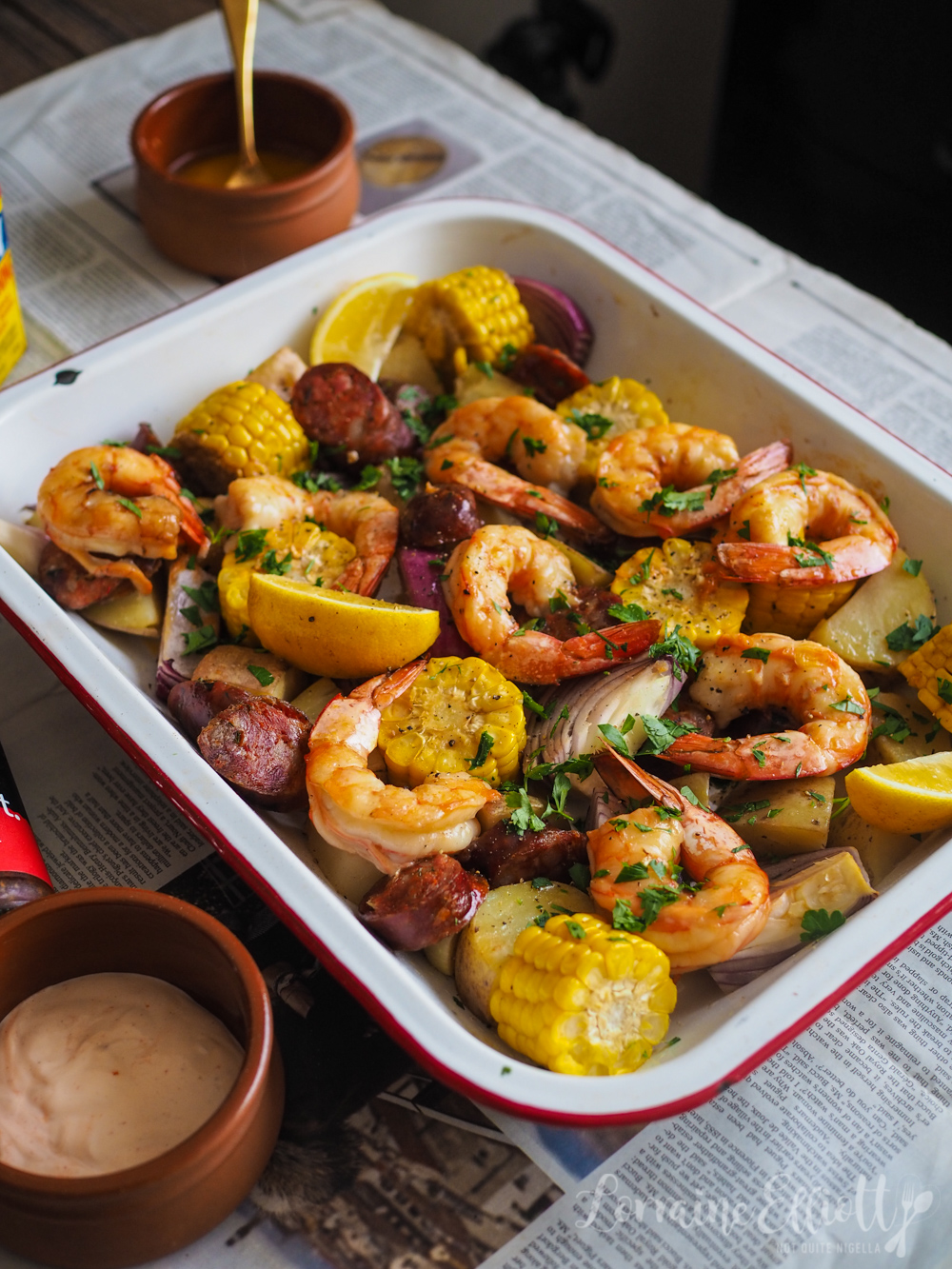 2 - Use raw shrimp or prawns and cook them last. My prawns were jumbo U6 prawns (which means you get 6 prawns per pound) so I cooked mine for 5 minutes just before serving. Smaller sized prawns will cook in 3 minutes. I prefer to peel the prawns first but that's just personal preference and often with shrimp boil you peel them after they're cooked. The newspaper that it is served on is to make cleaning up after shelling the prawns and spent corn cobs easier.

3 - I also didn't make a special trip to get andouille sausages and made do with some delicious pork sausages I had in my freezer. Use your favourite smoked sausage if you can't source andouille.

5 - I also served this with a hot sauce mayonnaise just to add something spicy. 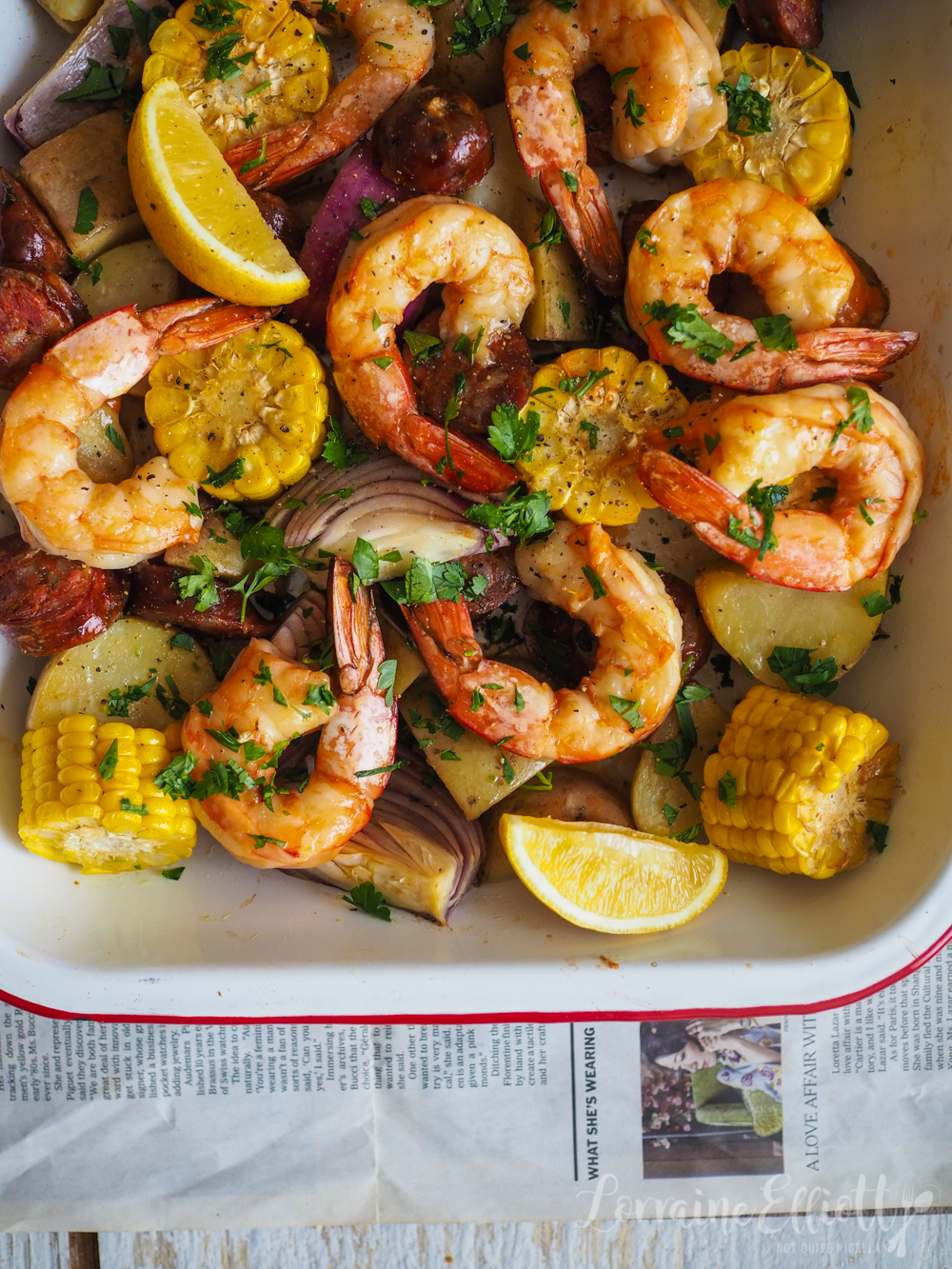 It's dishes like these that make me prefer eating at home to eating out. This way you can get messy, you can wear what you want and you can easily clean up after yourself. Having said that I have enjoyed eating out again after the months of lockdown. Recently there was one instance when I think we could have or should have stayed home. Valentina asked if we wanted to try out her favourite Nepalese restaurant in a highly desirable inner west suburb. She booked a table one weeknight and we met her and her husband Peter there.

Although it was prime eating period at 7pm the restaurant was empty. Valentina looked around concerned and said that it was usually buzzing with people and that she was worried if we could get a table as we were dining a few weeks before Christmas. During the whole night there was just one other couple dining in and two takeaway drivers but patrons never materialised.

The drinks came out and started with tall glasses of flat soda water. A dish was brought out that we hadn't ordered but we were hungry as there was a huge gap between entrees and mains despite the lack of customers. There were a couple of decent dishes but their famous eggplant curry lacked flavour and the food was generally underwhelming. They subbed us a different dessert and when we asked them why they had given us a different dessert they were dismissive and you could tell that they just wanted us to leave so they could go home, even at an early hour. I didn't want to say anything to Valentina because when you recommend a place you sometimes feel responsible for how the meal turns out (or maybe that's just me). Still the company was great and we had a good time. 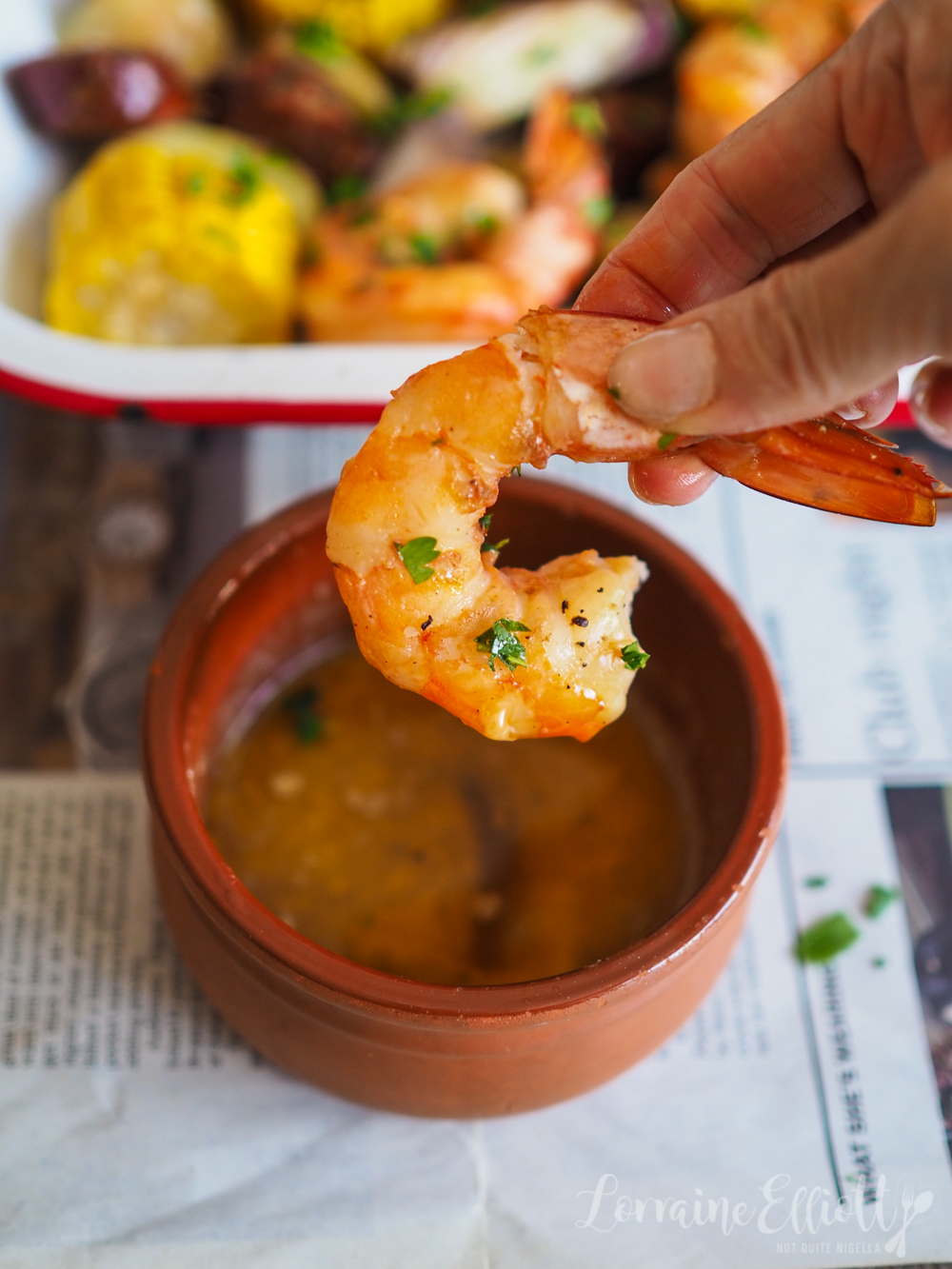 Until the drive home. I started to feel ill while I was driving. "Do you need to pull over?" asked Mr NQN as I started to feel chills and sweats. I made it home just in time but was sick over the next few hours. I wasn't sure whether to ask how Valentina and Pete were feeling but the next day Valentina told me that they were both sick. Pete was up 8 times that night and was still in bed the next morning. She fretted and said, "I’ve got friends coming over tonight so don’t know what to do— whether to cancel or not cause Peter looks dead!". We all recovered within a couple of days but vowed never to return to the restaurant. And our next catch up was switched to eating at home!

So tell me Dear Reader, have you ever had food poisoning from a restaurant? Do you feel personally responsible for whether people enjoy a recommendation? 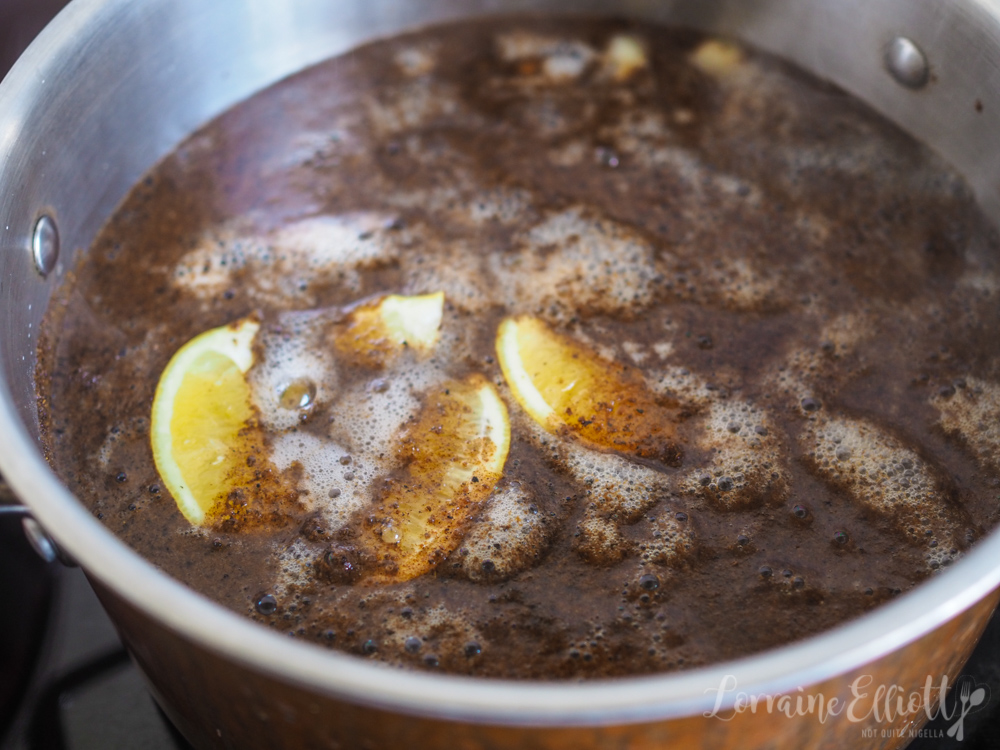 Step 1 - Brush a large baking tray (27x35cms/11x14inches) with oil and preheat grill. Place 3 litres/3 quarts of water to boil and add the Old Bay seasoning, garlic cloves, salt and 3 of the lemon wedges and bring to a boil. Add the potatoes and corn and cook for 7-8 minutes or until tender. Remove with a slotted spoon and place potatoes on the baking tray. Cut the corn cobs into 4 pieces and place on the tray. Boil the sausage pieces and onion wedges for 3 minutes or until sausages are cooked through and add these to the tray. 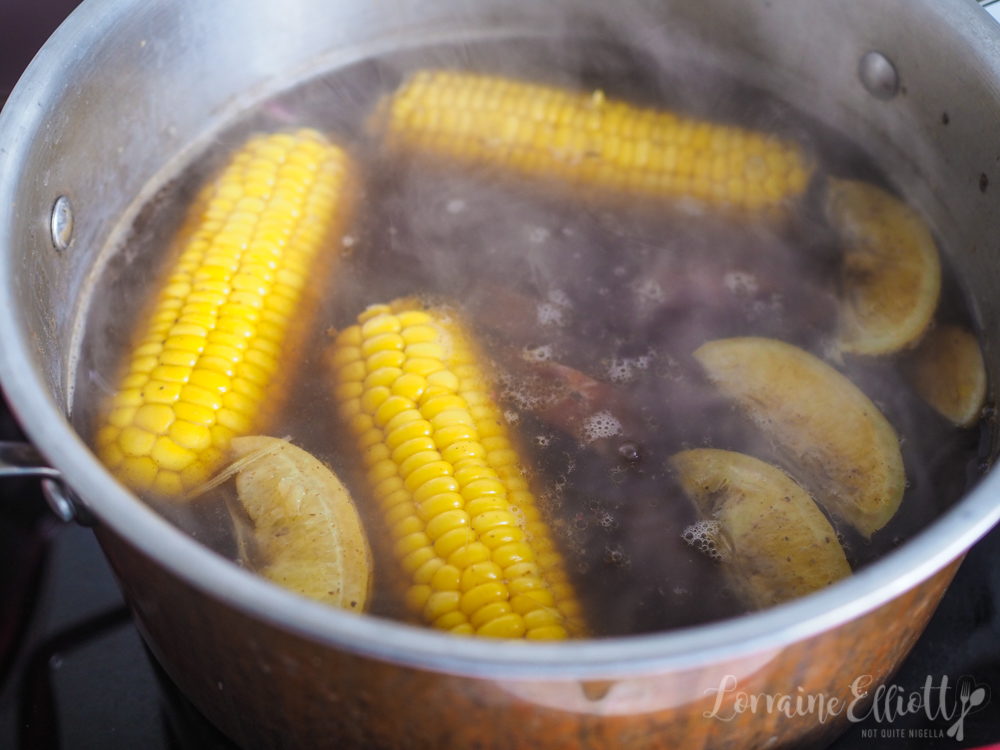 Step 2 - Preheat grill to high. Massage prawns with 2 tablespoon of olive oil and places prawns on top of the rest of the ingredients. Drizzle with some garlic butter and grill for 3-5 minutes depending on how big your prawns are (regular sized prawns will cook in 3 minutes, extra large ones 5 minutes). OR you can cook the prawns in the seasoned water too. 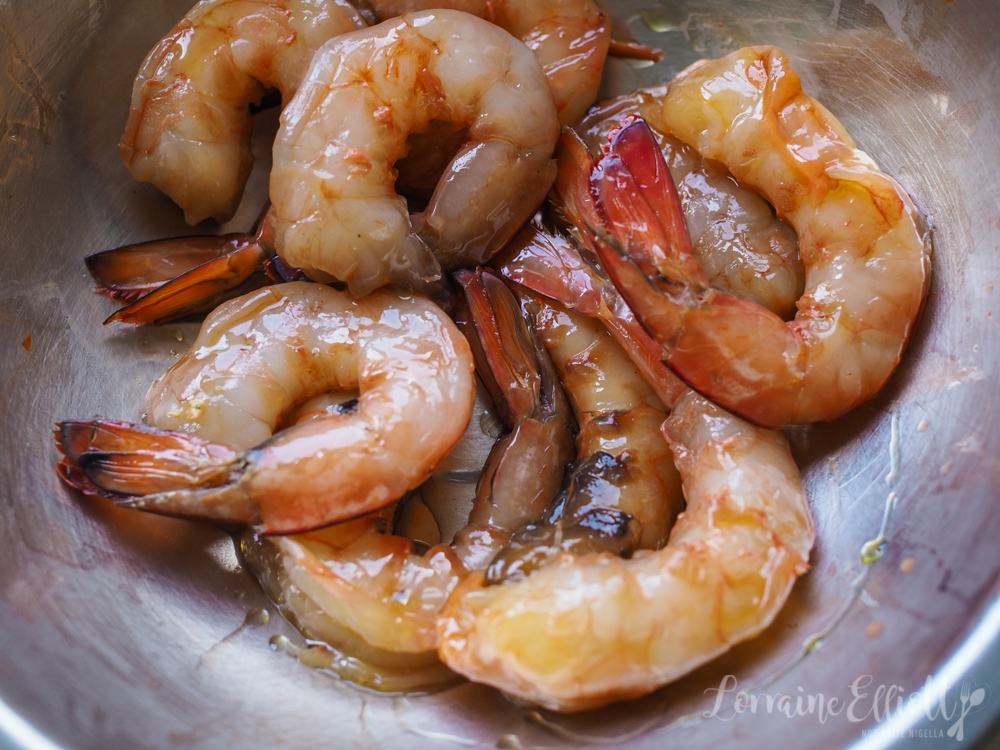 Step 3 - Serve with chopped parsley, extra lemon wedges and extra garlic butter on the side. Mix 1/4 cup mayonnaise with hot sauce to taste and serve this alongside the seafood. 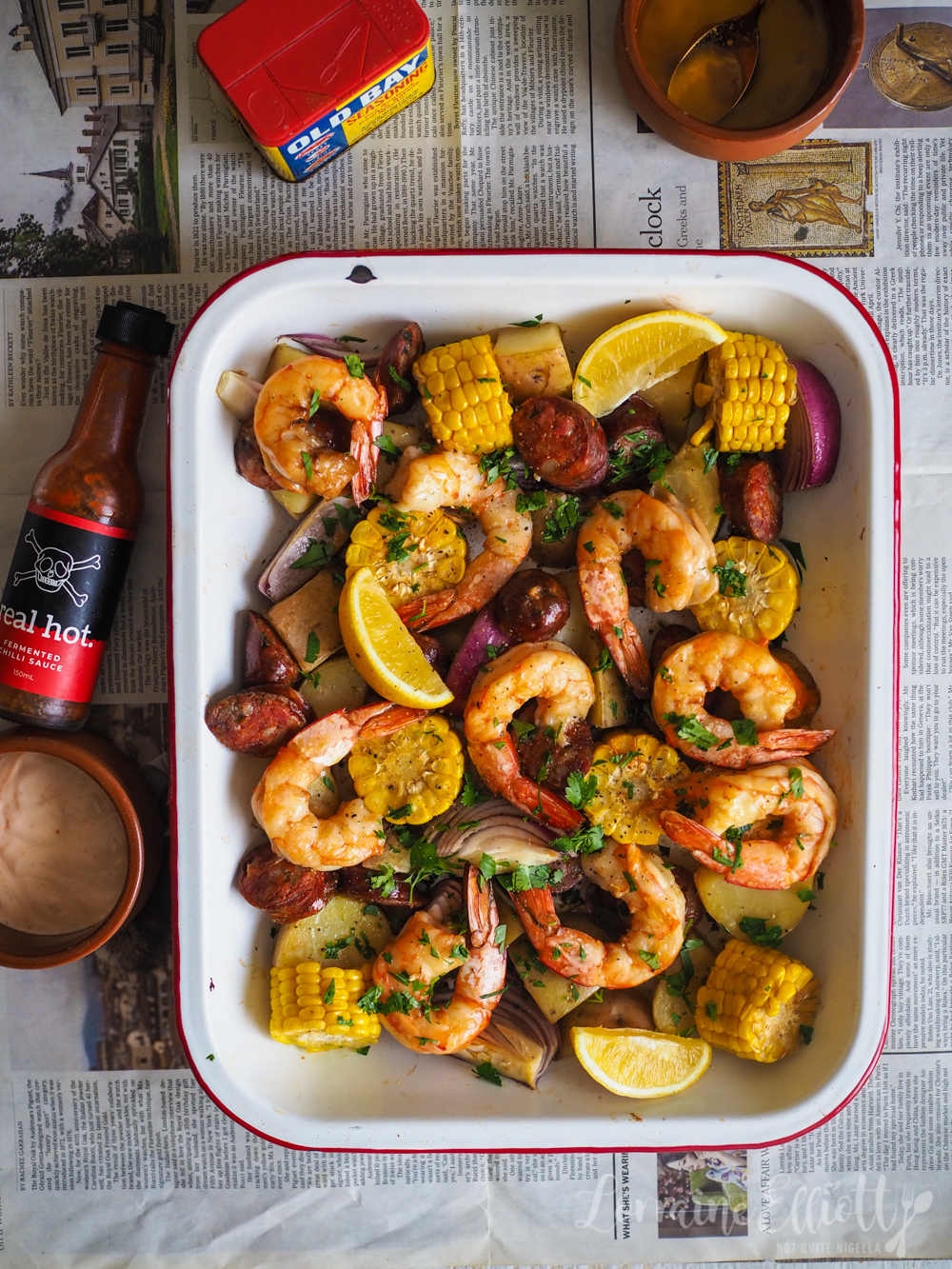