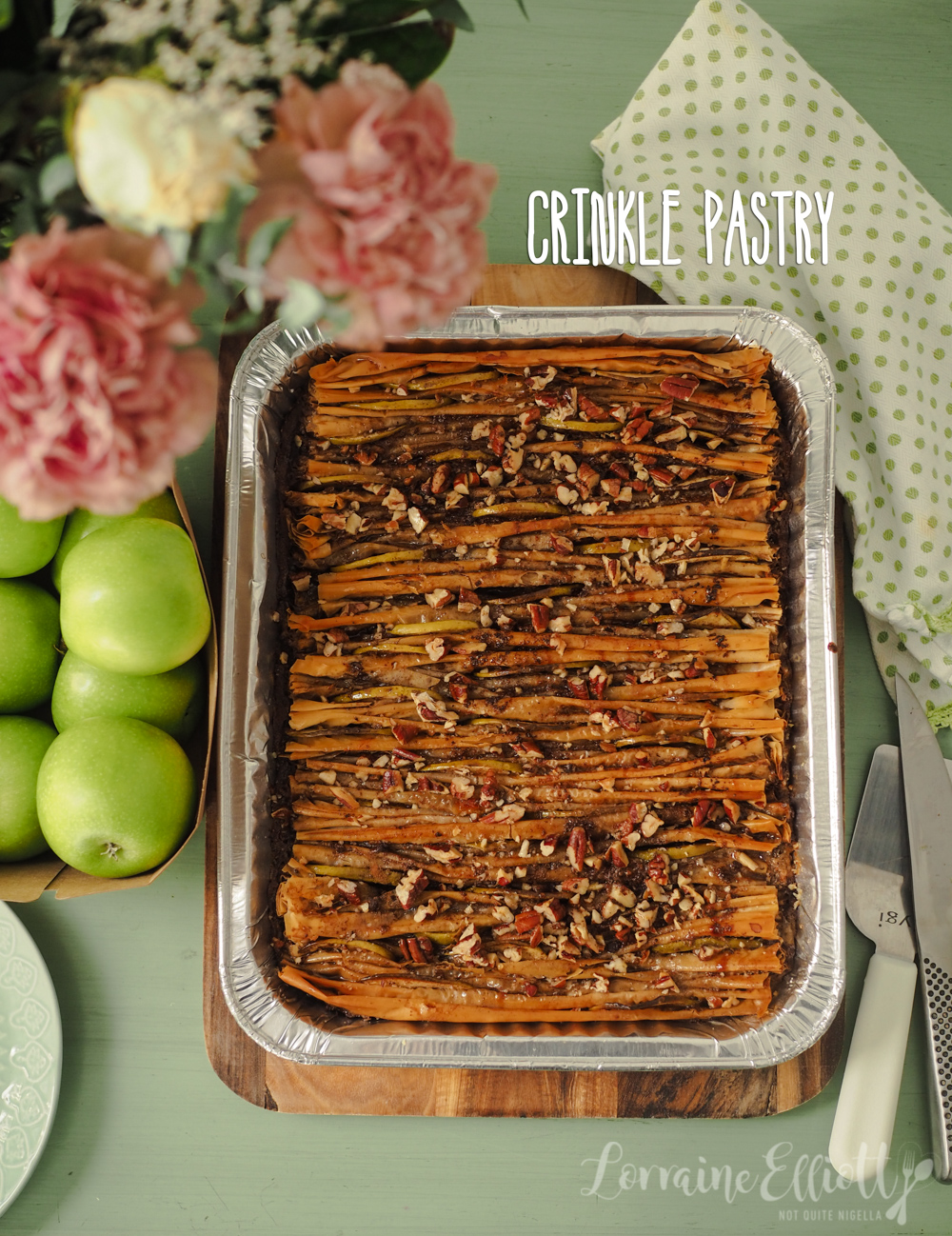 Everyone is talking about the crinkle dessert on TikTok. This is where filo pastry is folded in a crinkle pattern and it is one of the easiest, tastiest desserts you could ever make! Crinkle or Muakacha is a bit like a baklava crossed with a bread and butter pudding. And I promise that after you make this once, you'll want to make lots of other flavour versions! This is a pushy recipe Dear Reader!

Muakacha (moo-ah-ka-cha) or Crinkle is a Middle Eastern dessert and comes from an Arabic word meaning "wrinkled". I first made this after Laura told me about it as she saw it on TikTok. TikToker Ramenasaidwow built a business on the crinkle and it is her best selling dessert. Once she shared this recipe on Tiktok it went crazy. The reason why is that it is sooo easy - if you've ever bent over a tray brushing layers of filo with butter you'll understand what a labour of love filo pastry is. This however cuts that whole process out and you can do the prep for this in 10 minutes, tops if you make the basic crinkle! It has a truly addictive quality to it from the buttery pastry that is crispy on top but layered and soft underneath. There's a delicious custard that creates luscious layers and then the sugar syrup brings it all together. It really is like the flavours of baklava but the texture of bread and butter pudding. 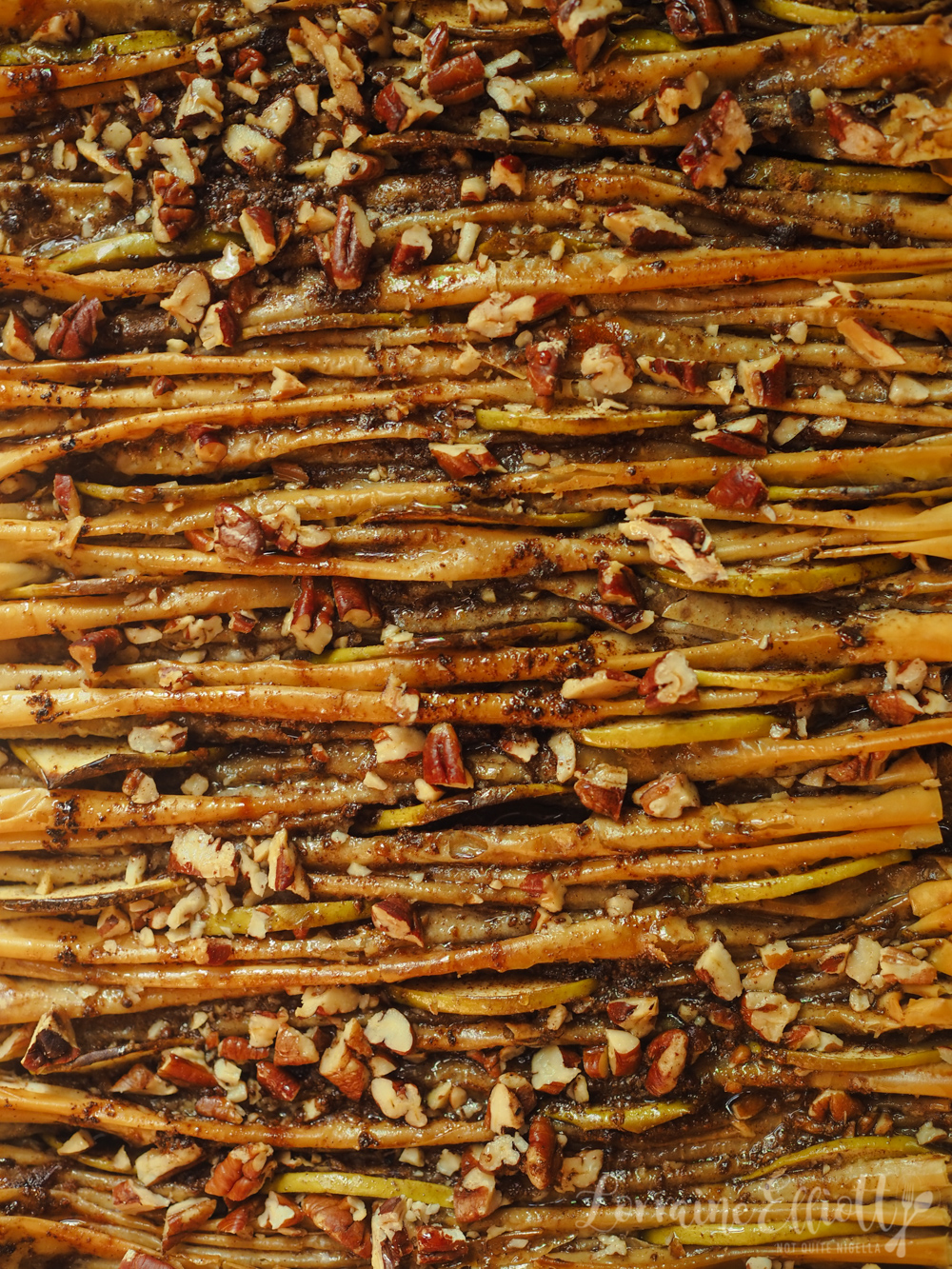 I made a regular one and all I could think was what other flavours I could put in it. I was so smitten by it and encouraged by Mr NQN's proclamation that this was his favourite pastry ever I made a version like a Pain au Raisin and then this one which is an apple, cinnamon and pecan crinkle!

This is such an easy dessert that there's virtually no need to give you tips but I found these handy because I've made crinkle so many times (addicted, moi?)

1 - I use a medium sized barbecue foil tray which is 32X26x4cms or 12.6x10x1.6inches. You may need to trim or fold your pastry to fit this a little but I like using barbecue trays to bring this to parties because you don't have to worry about getting your container back. These bbq trays can be quite flimsy though so I place them on a sturdy baking tray when baking.

2 - I find it easier to mix the cinnamon with the sugar and then add the milk, eggs and vanilla to prevent the cinnamon becoming lumpy.

3 - I use browned butter because I like the nutty flavour. You don't have to do much to make brown butter, just let it melt on the stovetop a bit longer so that it starts to develop a nutty aroma. Here's a step by step guide on how to brown butter if you haven't made it before. 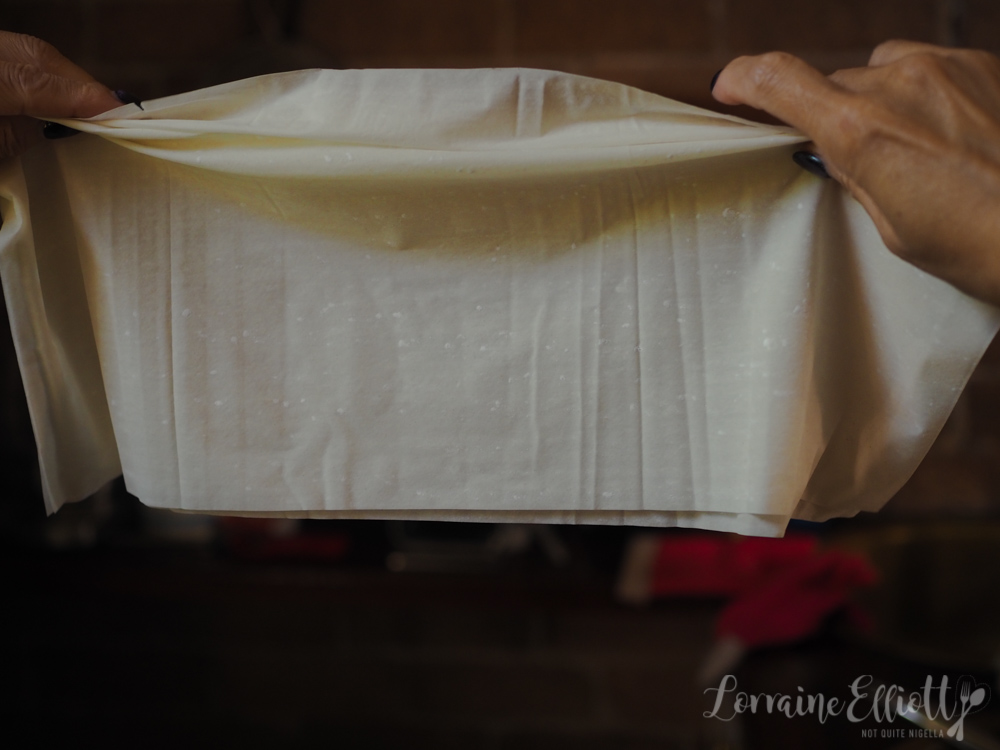 Lifting the filo and folding

4 - Folding the filo is fun! I find it easiest to fold the filo when it is lying flat on a surface but Ramona lifts these up in the air and gathers them. Do whatever way suits you best. 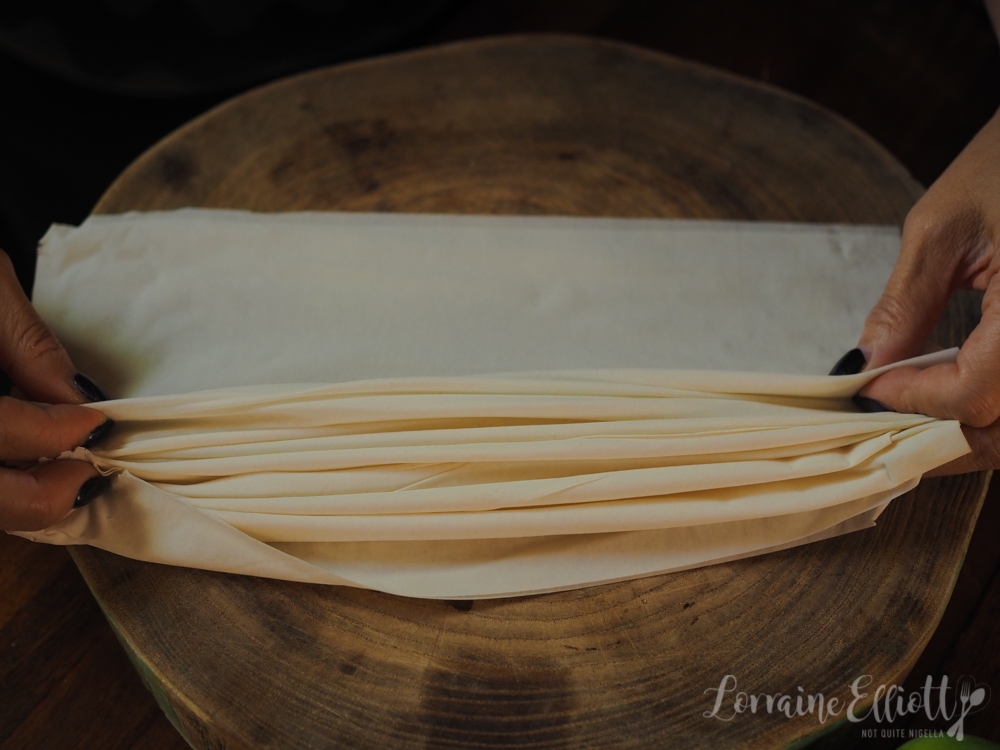 Folding filo against a flat surface

5 - Make sure that when you make the syrup that you dissolve the sugar completely in the water before boiling it. I actually had some syrup seize which hasn't happened for years! My tip is to boil some water in the kettle and then stir this with the sugar to dissolve it before putting the pot on the stove and boiling it for around 10 minutes on medium high heat. 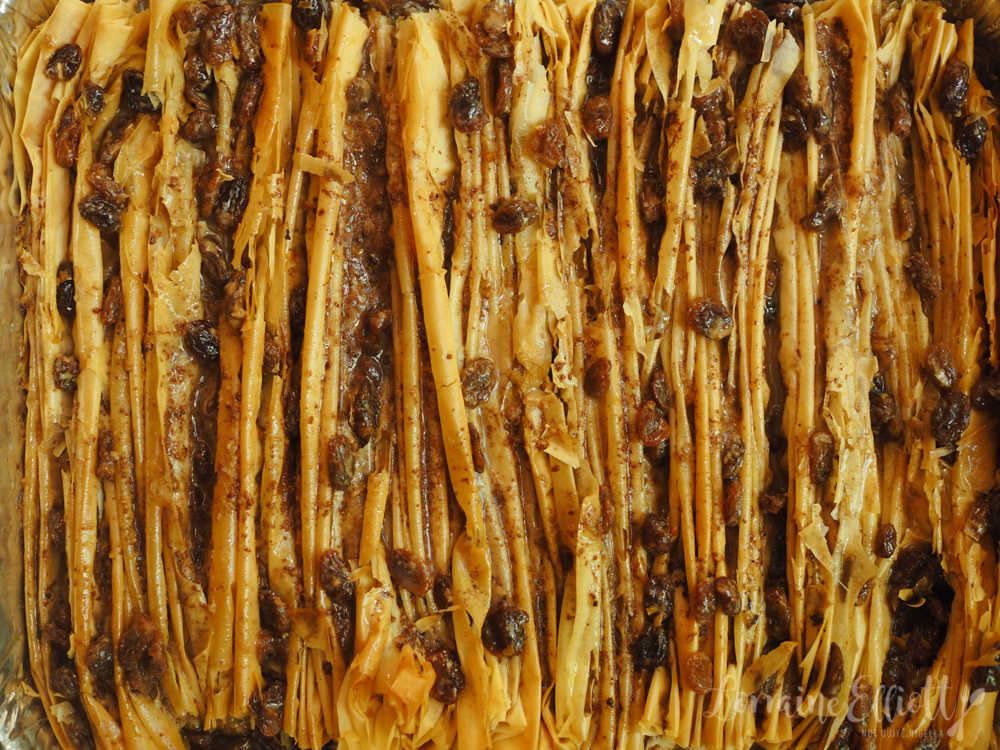 Pain au Raisin Crinkle: I made a version of Crinkle with a Pain au Raisin vibe. I soaked half a cup of sultanas in Baileys for a few hours and then added these in step 4. I also baked it lower at 160C/320F so that the sultanas wouldn't burn.

Classic Crinkle: I also made a version topped with chopped pistachios and I added some orange blossom water and it was amazing and transported me back to holidays in the Middle East.

Choc Chip Crinkle: you can also hide chocolate chips in the layers to give it a Pain au Suisse vibe and add a teaspoon vanilla to the syrup 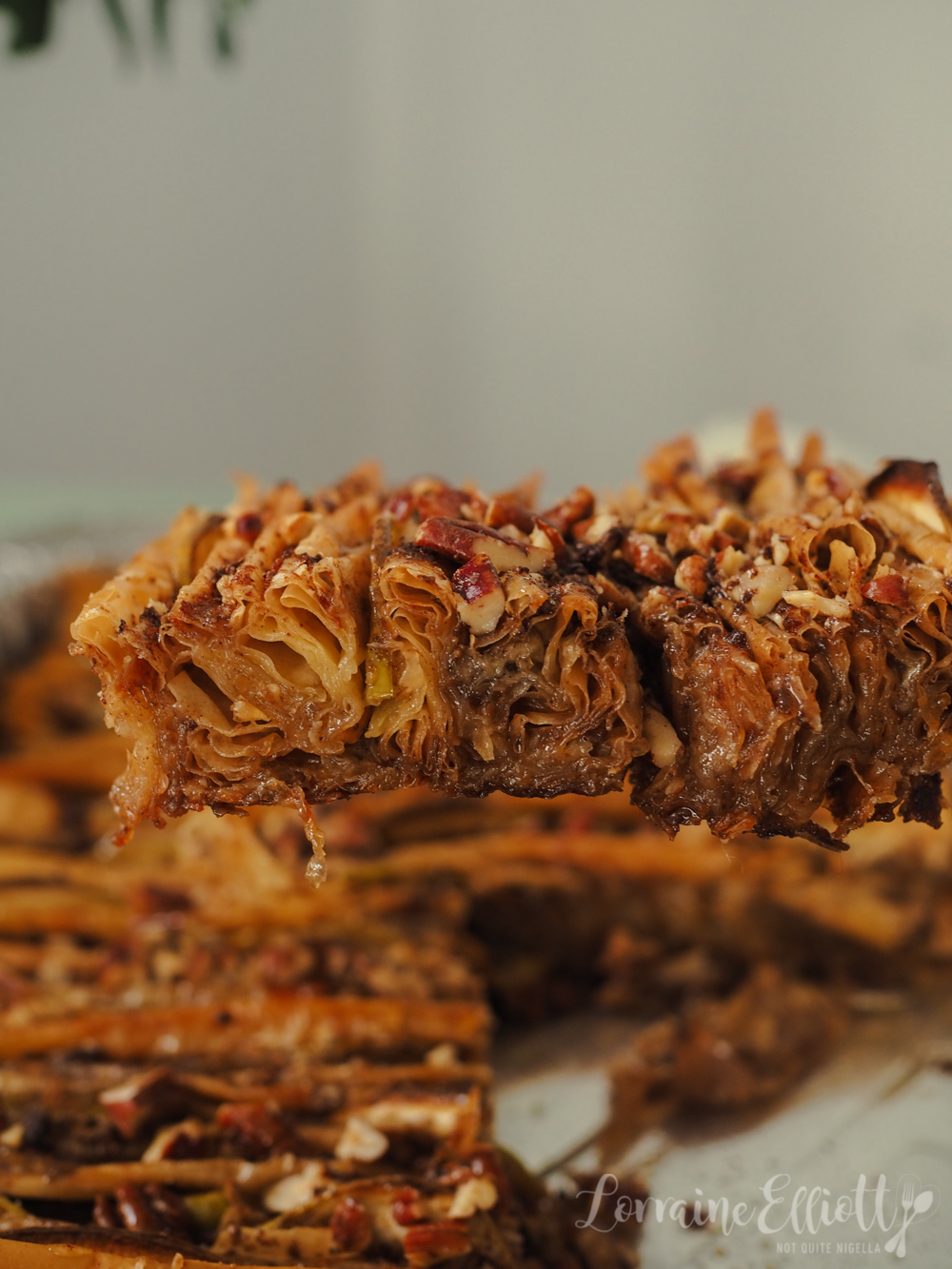 As soon as I made it I messaged Laura how much I loved the crinkle. She had told me about it a couple of weeks ago when we were driving to Canberra. I was staying at the East Hotel which I love staying at but it was at capacity as it was the ANZAC Day long weekend so Laura had to find another hotel. There was one nearby that we had both stayed at before. It was a 5 star hotel with all of the amenities that she would need and we planned on hanging out at my hotel one night and then her hotel the other night.

As we arrived late we checked into my room first and left for dinner from there and she checked into her hotel after dinner around 11pm. The next morning she texted me that she was running late because she was engaged in a "situation" with the management of her hotel. It turned out that her 5 star hotel was missing some crucial details. For starters her air conditioning wouldn't work. And then when she took a shower around midnight she looked around for a towel. There were no towels at all in her room and she had to dry herself using a hand towel. There was visible mold around her shower and when she called downstairs to let them know they didn't quite know what to do as the hotel was full so they offered her a free breakfast in the room. They told her that that was all they could do because they were fully booked. She was upset because this hotel was $450 a night and you do expect basics like air conditioning to be working. 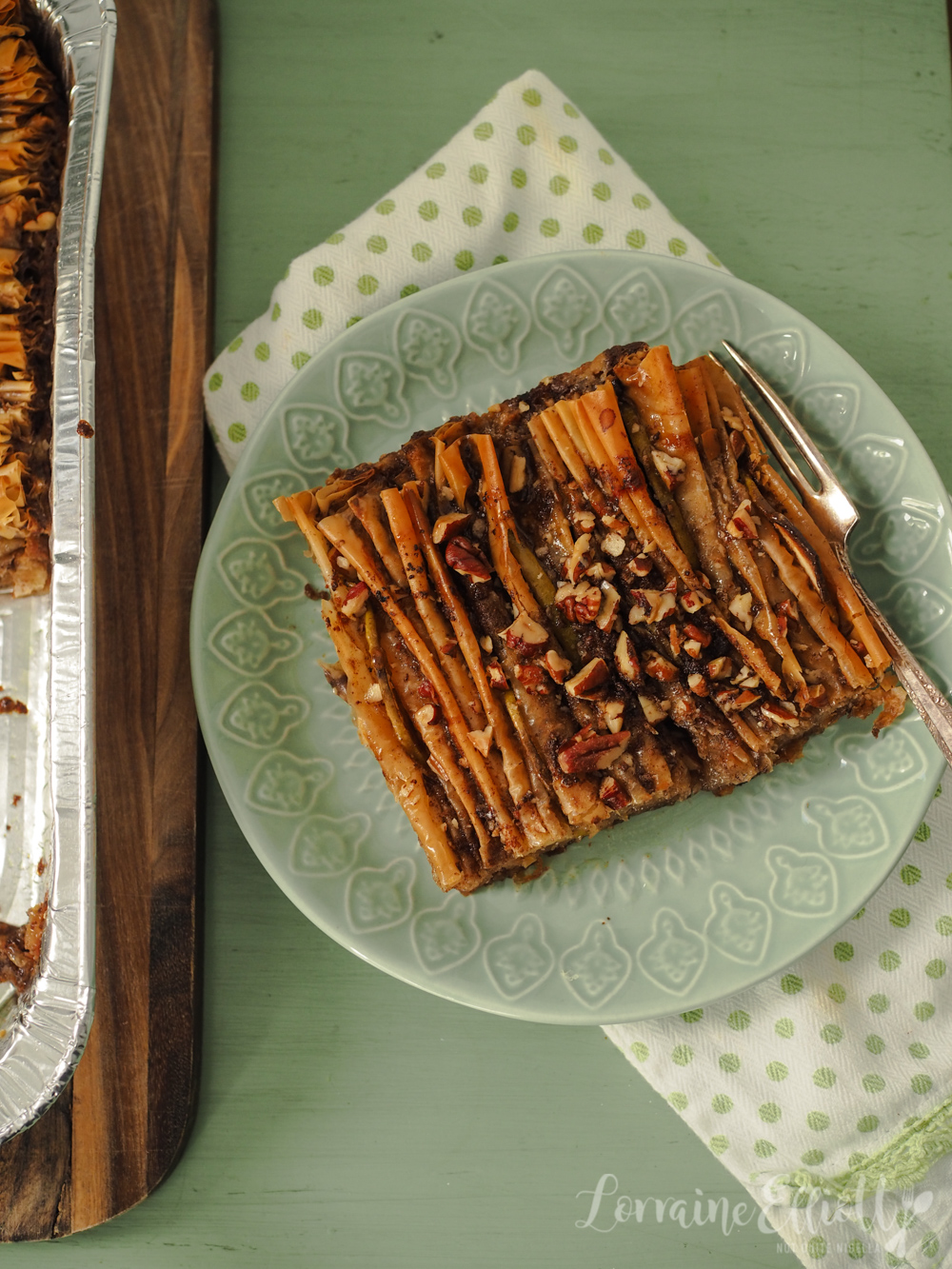 The next day they promised that something would be done about it but hours ticked by and nobody called. What made matters worse was that instead of solving a problem they made it her problem and it was up to her to call the hotel several times over our lunch. Every time she got passed onto different people like a hot potato. Laura is one of the most understanding people I know but they weren't getting it and worse still they got defensive and tried to blame the lack of communication on her not being in her room during the day (seriously how many visitors to a city are in their hotel room during the day?). Also she had given everyone she spoke to her mobile number.

In the end she was moved into a different room. A better room that apparently they keep aside for who knows VIPs? It wasn't that VIP although it was nicer and the air conditioner worked. They ended up taking $200 off her final bill but I doubt she will ever stay there again! She knows hotels and service and she also knows her pastry!

So tell me Dear Reader, have you heard of crinkle? Would you make it? What is the worst hotel you've stayed at? 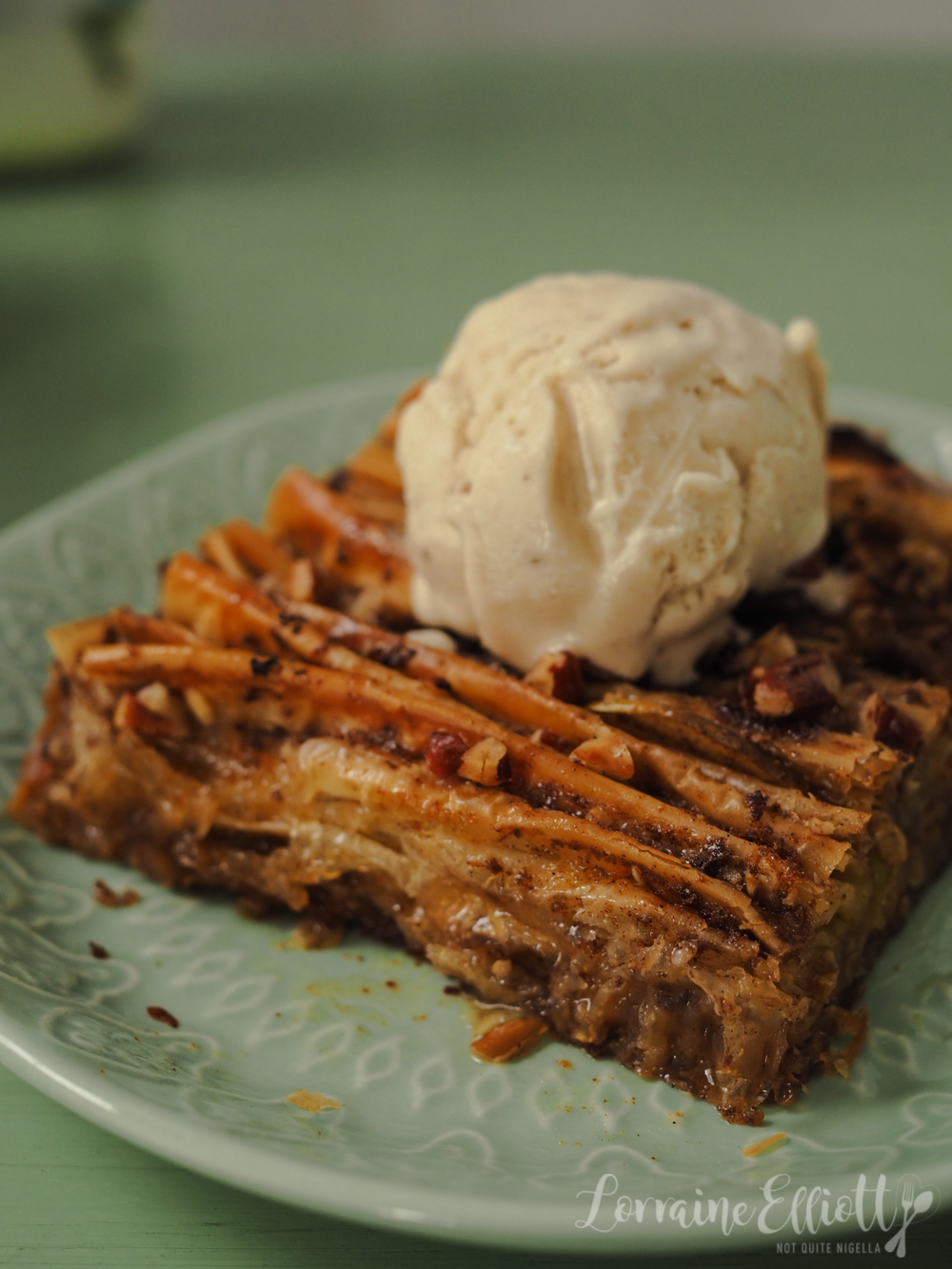 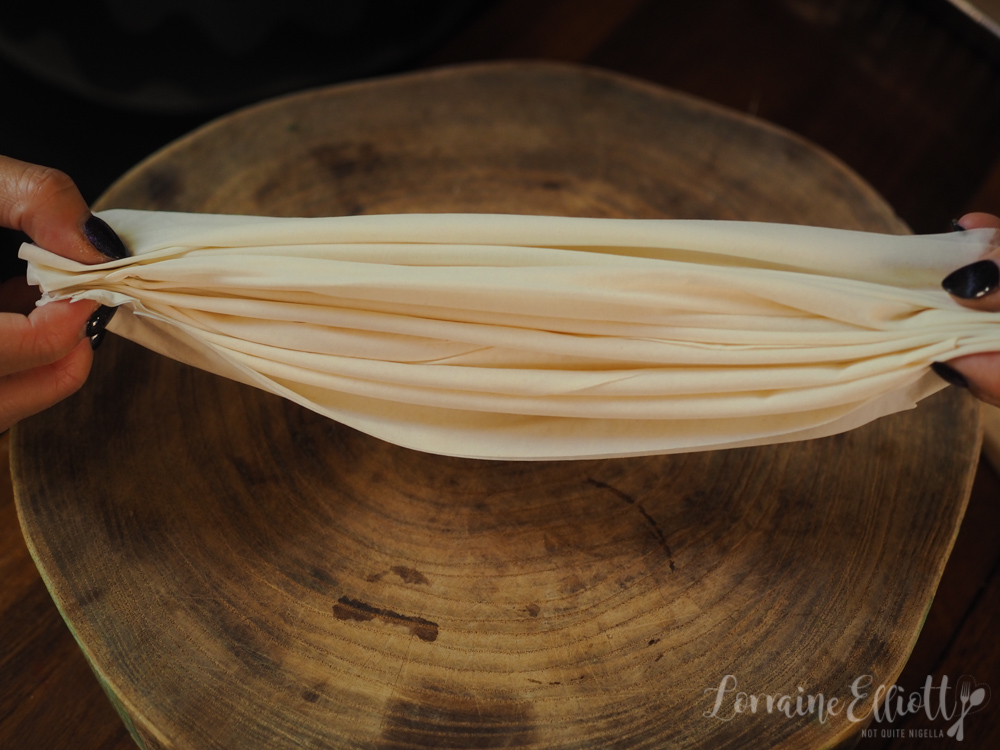 Step 1 - Preheat oven to 180C/350F/gas 4.5. Take a foil tray around 32x26cms or 12.6x10inches (a medium bbq foil tray is good for this) and spray the base and sides with oil. Take two sheets of the filo pastry and fold wrinkles in them as shown. I find it easiest to do this when it is lying flat on a surface but Ramena lifts these up in the air and gathers them. Do whatever way suits you best. Trim or fold the edges to fit the tray and repeat with the remaining pastry. Bake for 15 minutes. 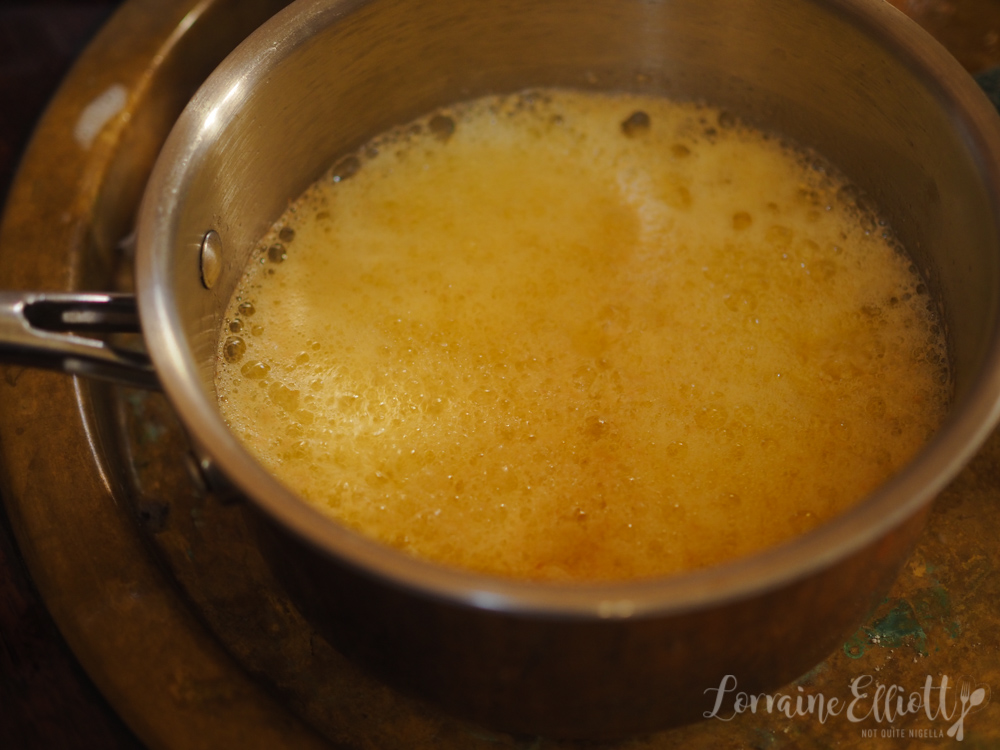 Step 2 - While it is baking brown the butter in a medium sized heavy based saucepan on medium high heat until it smells nutty and becomes foamy. Pour this evenly over the lightly browned pastry and then return to the oven for 10-13 minutes to bake and become golden. 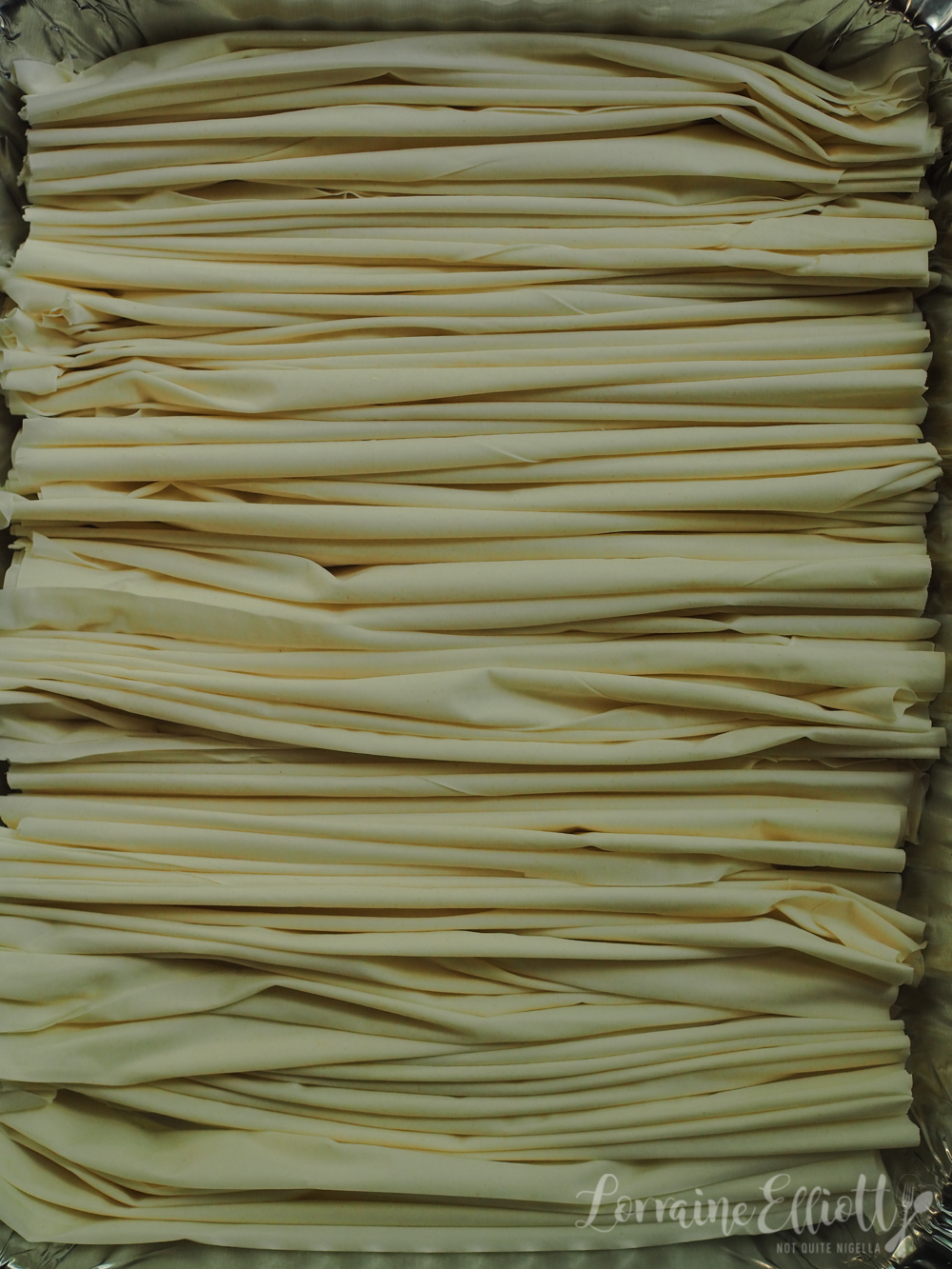 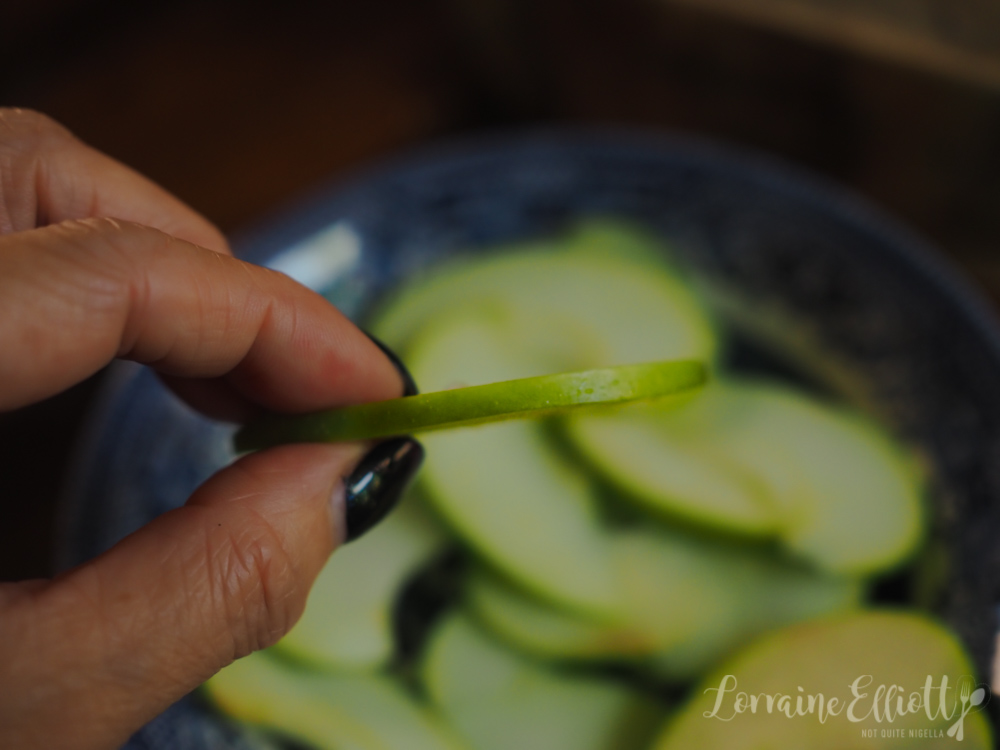 Step 3 - While it is baking whisk the sugar and cinnamon together until mixed well. Add the milk, eggs and vanilla bean paste and whisk to combine. Slice up the apple very thinly. Remove the pastry from the oven then slide the apples into the layers poking them down. Pour the custard mixture on top and bake for 15 minutes. Then turn the pan in the oven and bake for another 15 minutes. 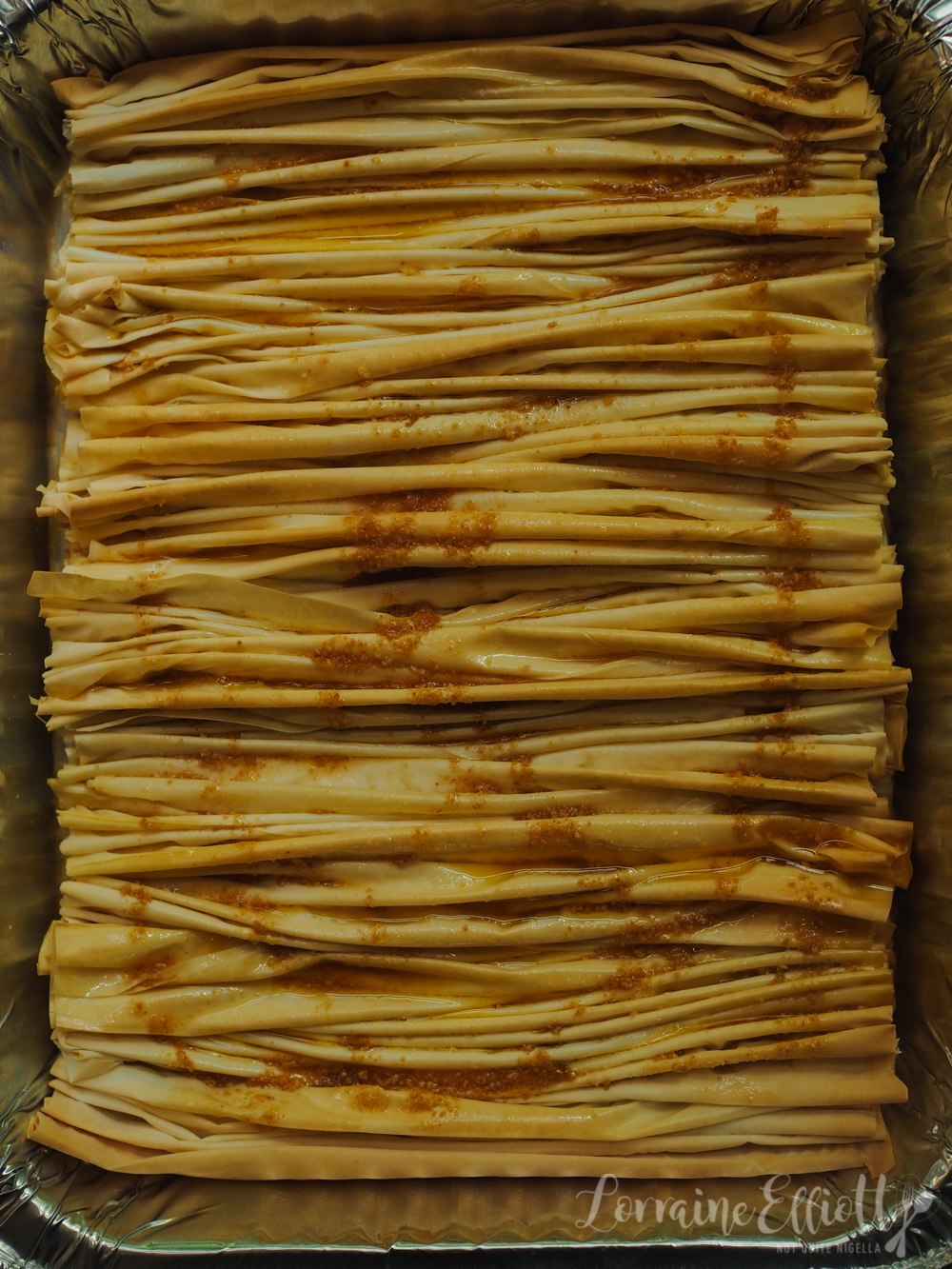 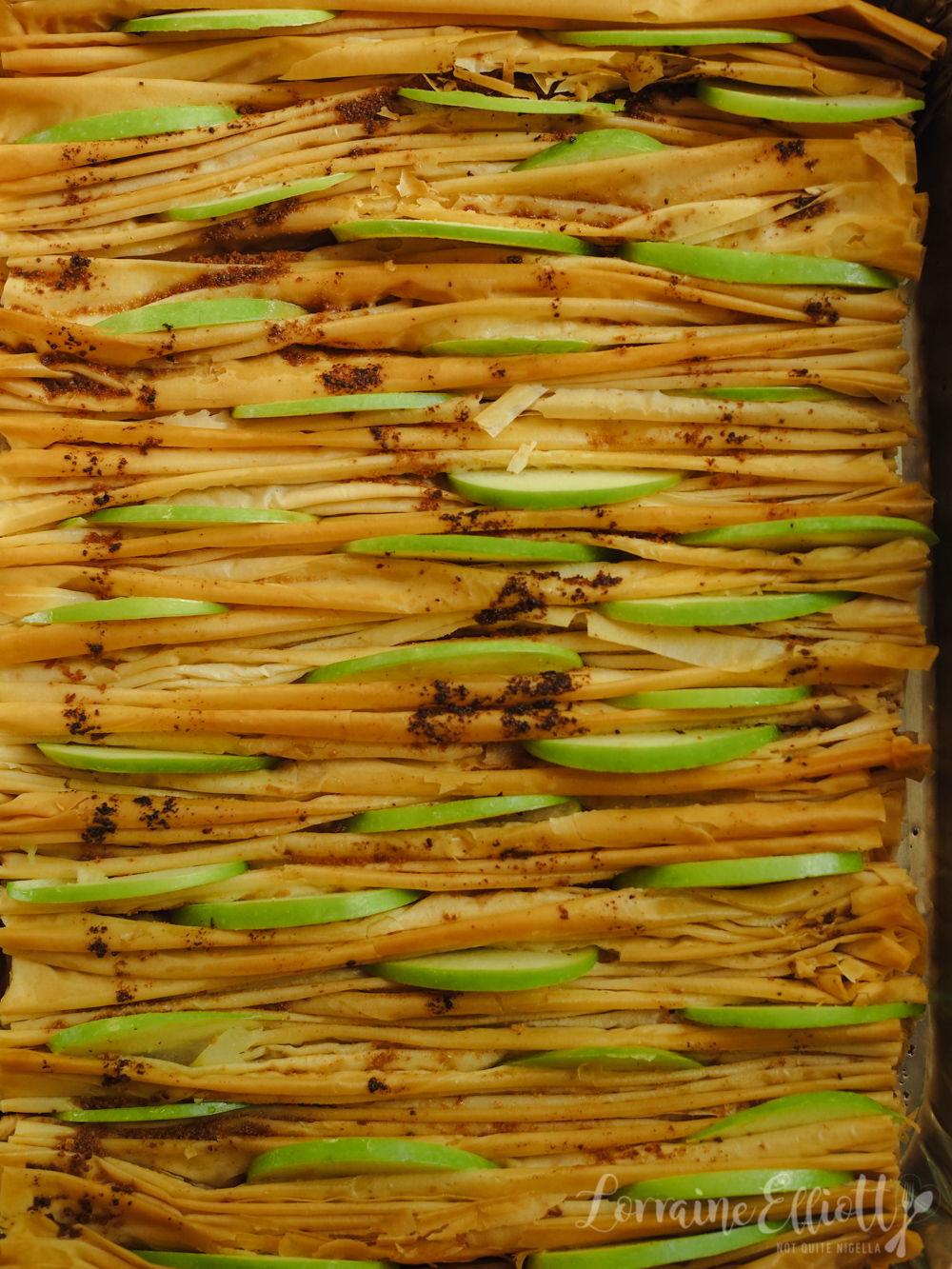 Sliding in the apple slices

Step 4 - 15 minutes before it is finished add the pecans. Then make the syrup. Boil a cup of water in the kettle and dissolve the sugar in this completely before putting the pot on the stove and boiling it for around 10 minutes on medium high heat. Add the cinnamon and vanilla once it has a thick, syrupy consistency (it will thicken upon cooling too). Pour over the hot crinkle. Serve with vanilla ice cream. 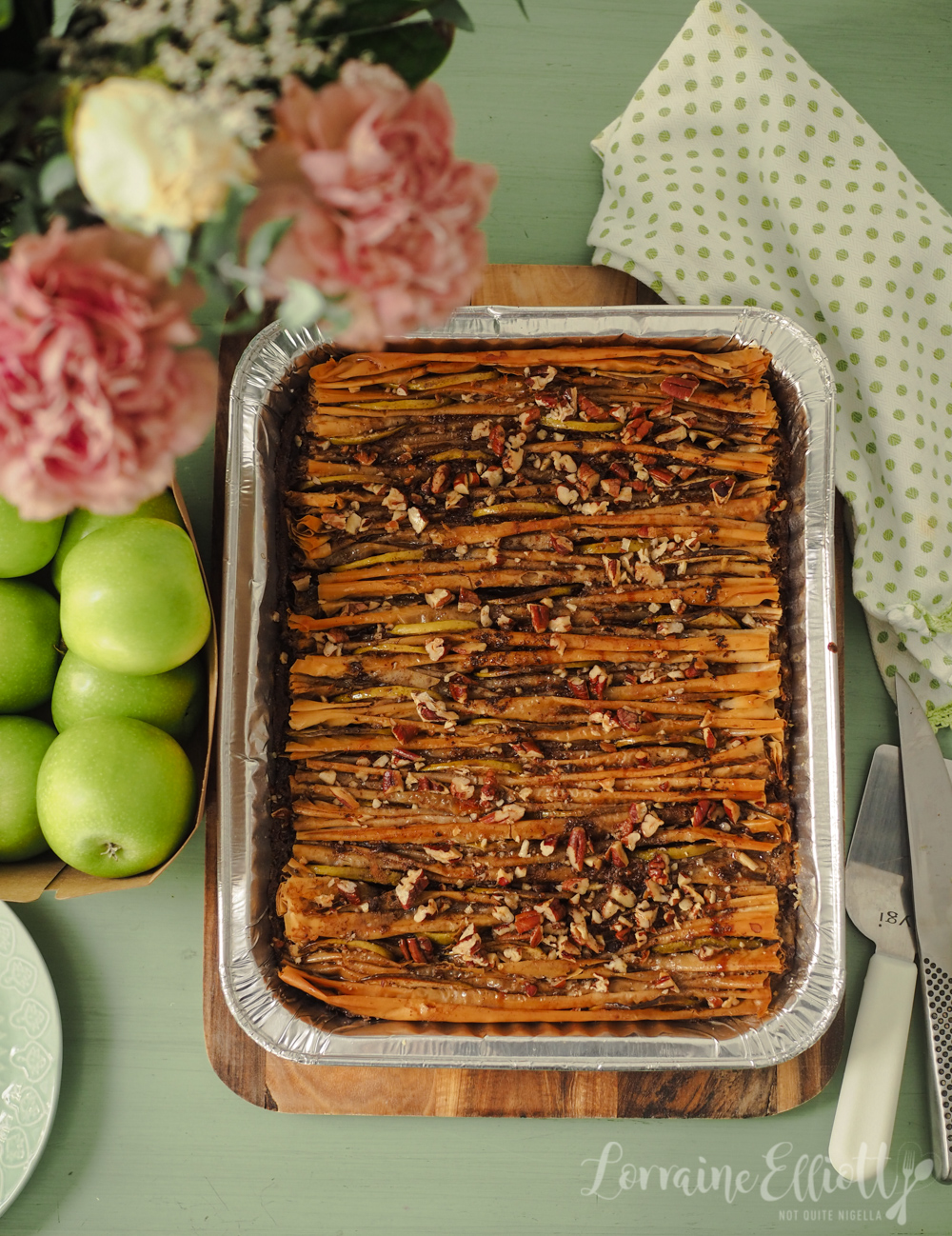