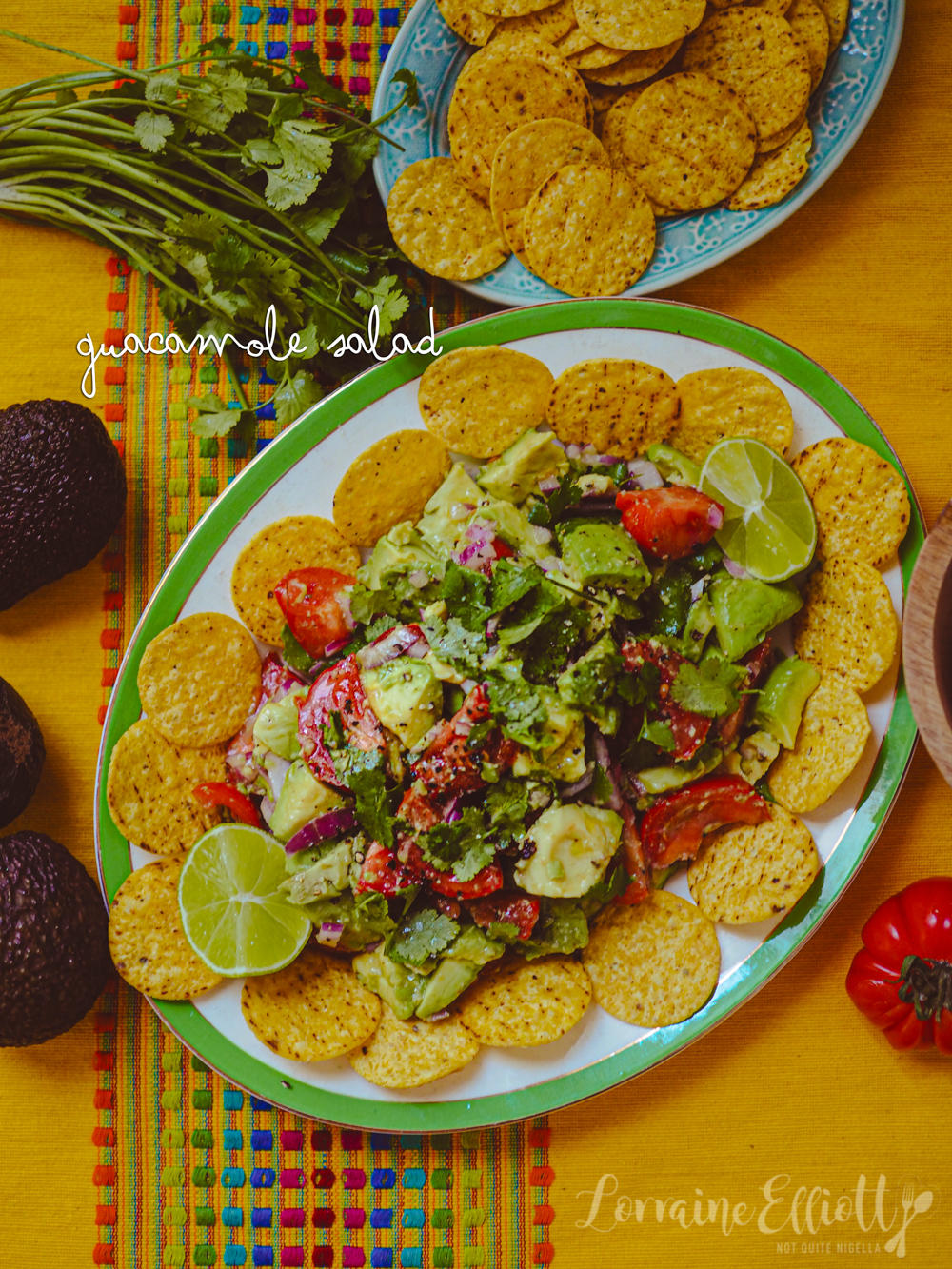 This fresh, healthy guacamole salad has all of the flavours of traditional guacamole with a fresh, crunchy texture. There are chunks of avocado, tomato, lime juice, coriander and corn chips on the side. It's perfect to serve with seafood, a meat main or as a starter. If you love guacamole, and really who doesn't, then this is a pushy recipe Dear Reader!

I came up with this guacamole salad idea because of the expensive vegetable situation that we're having in Australia. Never did I ever think that I'd see a head of lettuce for $10 or a half cabbage for $12 but there you go. Although tomatoes are really a summer fruit they are available all year round and while they are a tiny bit more expensive than they are in the height of summer they're not insanely priced. The only bright side is that avocadoes are very cheap at the moment and I'm pretty sure nobody saw a future where avocadoes would be $1.50 and lettuce $14. 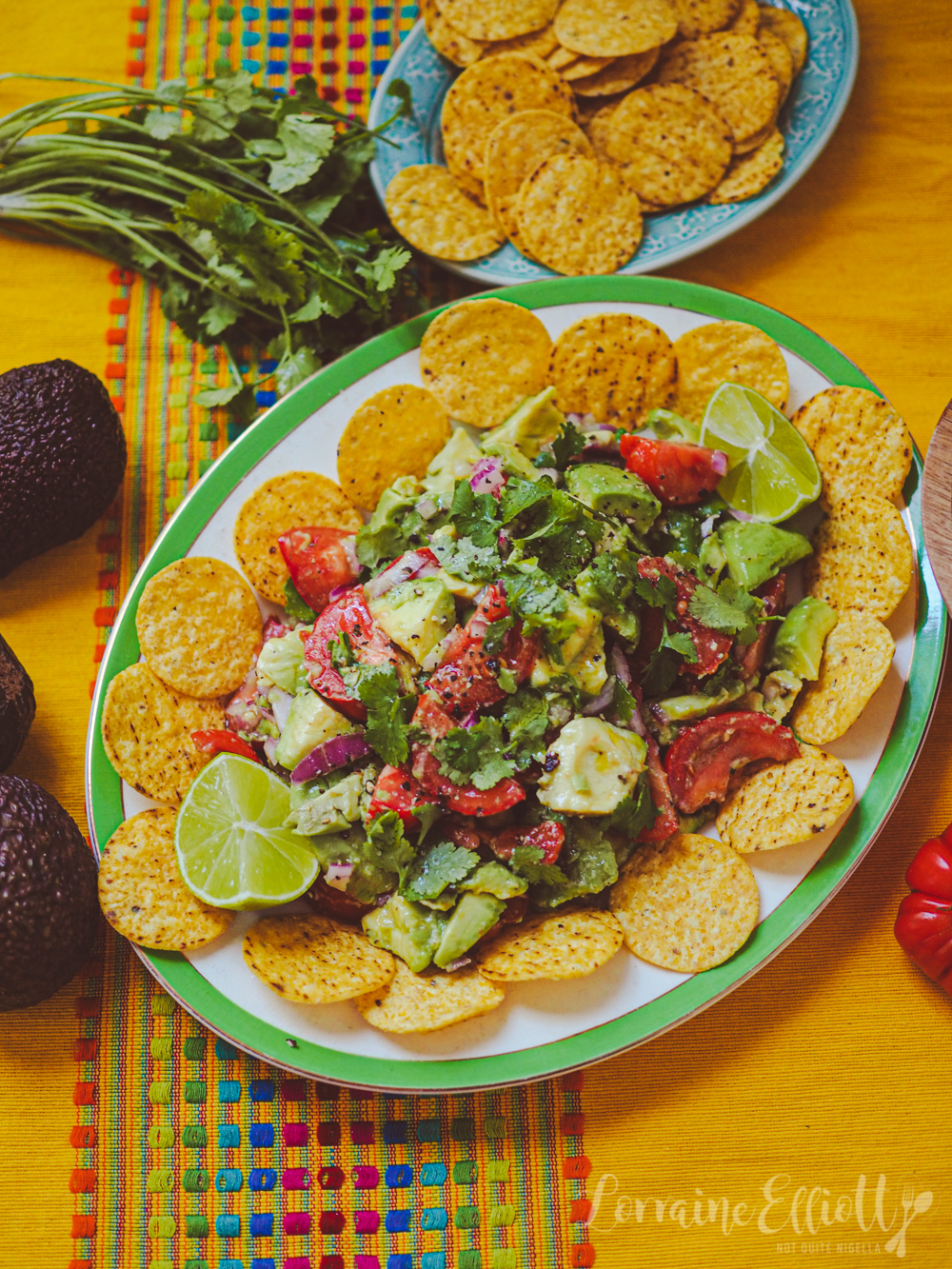 I read that avocadoes are cheap right now in Australia as growers in the last few years have started to plant avocado trees and Australia has around 3 million avocado trees, half of them planted in the last 5 years. Apparently we are avo freaks - in Australia we eat around 4kgs of avocado per capita a year with the US just behind at 3.6kgs per capita a year. Over 80% grown are Hass and the rest Shepherd. Trivia corner over! 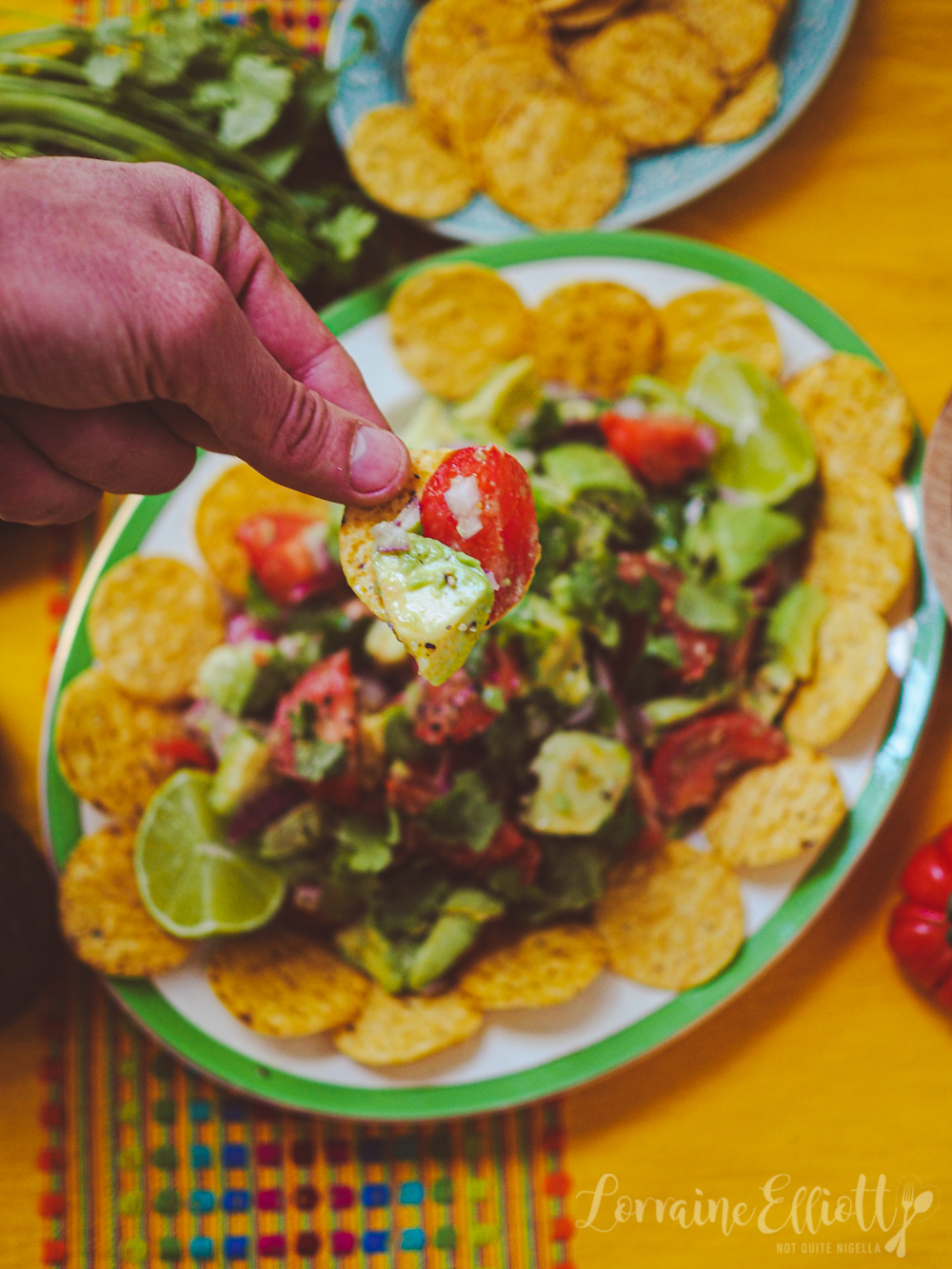 I'm so glad that it's warmer "salad weather" which is perfect as our home renovations are going on in the background. The first room to be dealt with is the kitchen. We are moving the kitchen to the back of the house overlooking the garden for that indoor outdoor feel and I designed it exactly the way I wanted it with my designer Kathy. We decided on dark joinery called "North Sea" which is a beautiful dark grey with green elements that would pick up the green of the garden and the green exterior of the back of our house. The negotiations with the kitchen guy were fraught-his quote was very high and back and forth we went. It was like dancing with a crocodile and I wasn't sure that I was going to keep all of my limbs.

The main reason why we were keen to go with him was because he was available at short notice and could install it in a matter of weeks rather than months as every other kitchen maker was booked up. It came to the first day of the two day installation. I came home from being out and his team were gone for the day. I rushed to the back to see their progress and stopped straight in my tracks.

I messaged the kitchen guy Darren. "Did you use North Sea by Porters for the colour? It looks very blue to me." He answered that he would check it in the morning. I was left panicking and I was texting my amazing builder Peter (we call him Perfect Peter) stepped in and offered to bring me some swatches of Porters "North Sea" the next morning which was just amazing of him. He had nothing to do with it, he just saw my panic and wanted to help.

Kathy's design had specified "North Sea" as the colour but this has been interpreted by Darren as "North Sea BLUE". North Sea is by Porters and North Sea Blue is by Dulux and they are very different colours. Yup one word. Big difference. HUGE! And at no point did Darren clarify if it was North Sea or North Sea Blue.

The problem was we signed a contract that specified Dulux North Sea Blue in it (Dulux is cheaper than Porters we learned and we thought that he had colour matched it). We had both made mistakes, him in interpreting North Sea to North Sea Blue and not confirming it with us and us by signing the contract and trusting that he would deliver what was in the original plan. You do hope and pay for the expertise and guidance but that's not always the case.

I asked Darren if he would meet us halfway and split the cost of respraying it but he refused. And since he had required a 90% deposit before coming over to do any sort of installation I was backed into a corner. It was either pay in full to have it resprayed or wince every time I looked at my kitchen. So it was back to the painters for North Sea (and not North Sea Blue) and I was $3,000 poorer!

So tell me Dear Reader, have you ever had something go very wrong with a renovation? Do you like avocadoes? How many do you eat in a week? 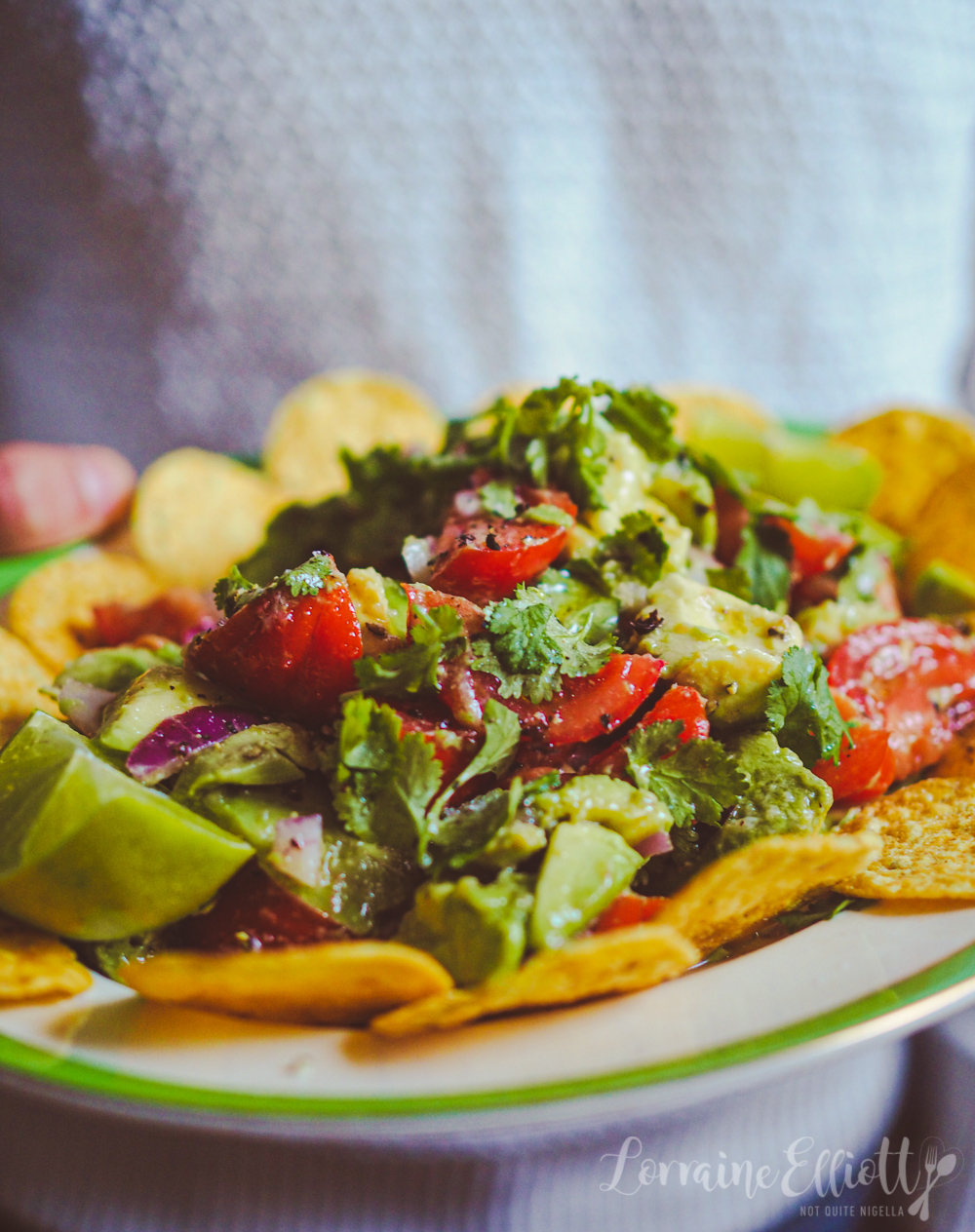 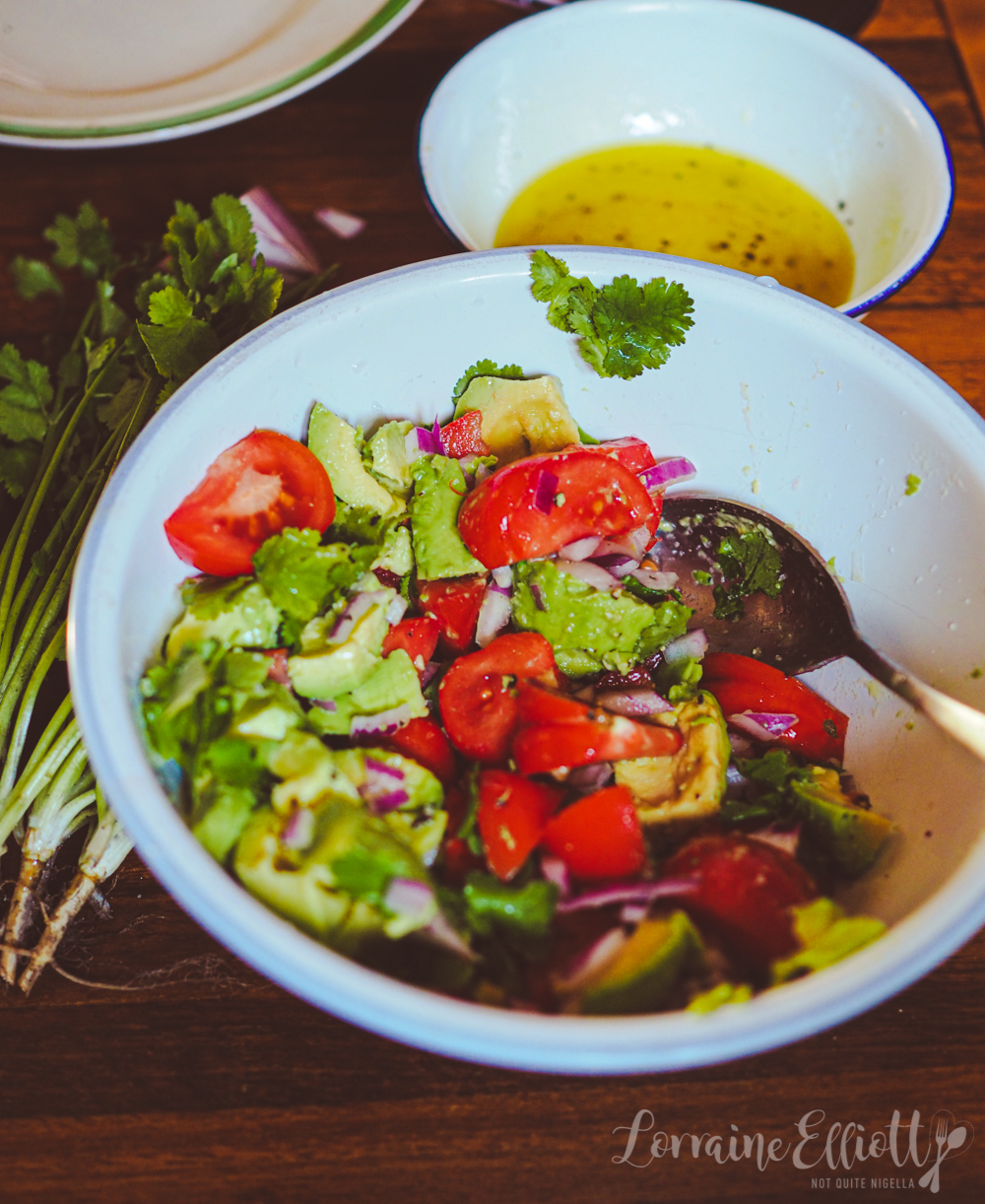 Step 1 - Cut the avocadoes in half and slice into bite sized pieces and do the same with the tomatoes. Place in a large bowl with the diced red onion and coriander leaves and season well with salt and pepper.

Step 2 - In a small bowl whisk the lime juice, oil and garlic until emulsified. Season with salt and pepper. Then dress the salad in this tossing gently. Place on a serving plate with lime wedges and corn chips. 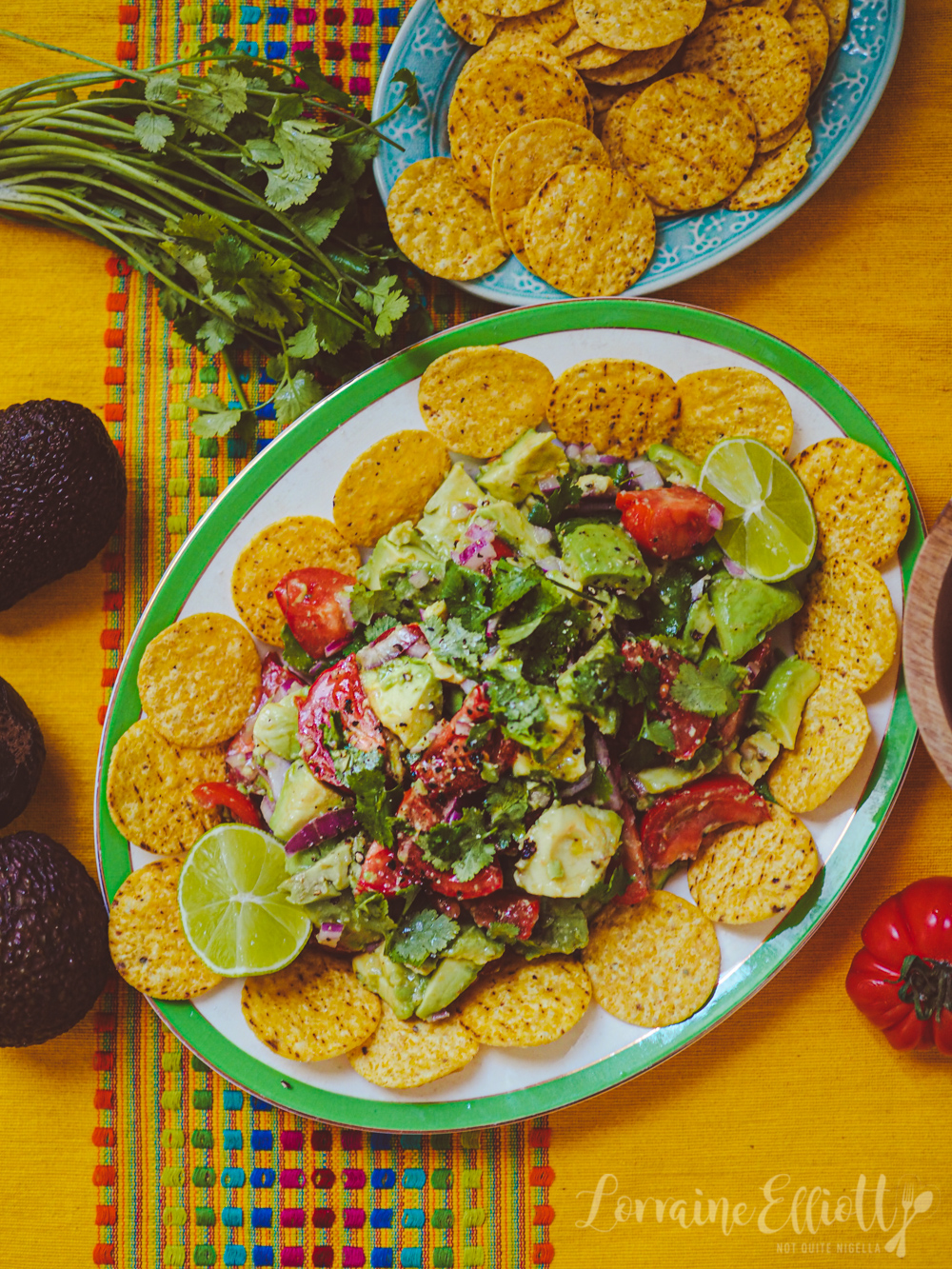