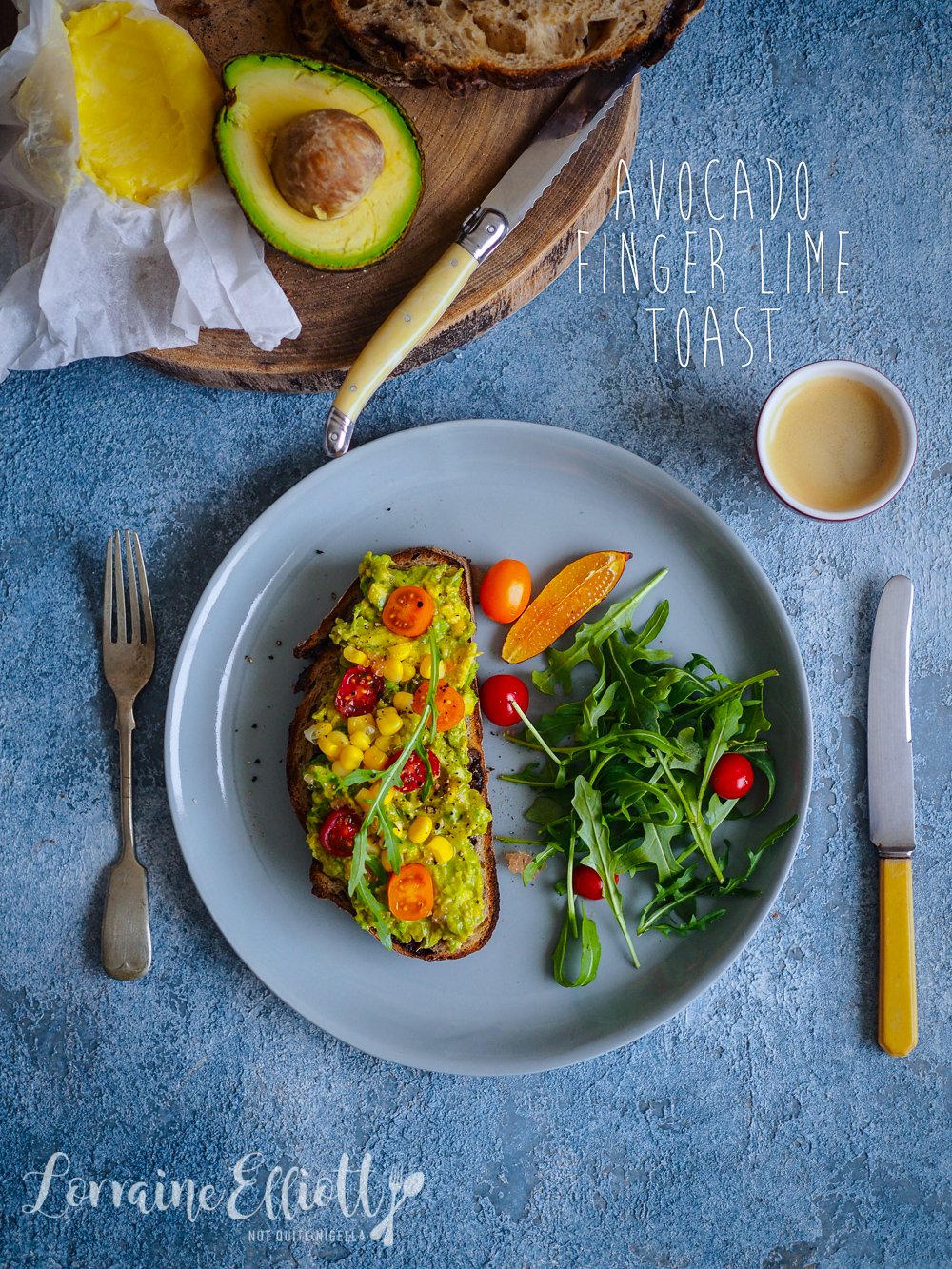 Do we reeeeally need another avocado toast recipe? I know that avocado toast is probably so simple that you won't want to be bothered reading through this recipe idea but I promise this is a creative, native Australian twist using finger limes instead of regular limes. Finger limes with their tiny, tangy caviar beads bursting with lime juice are perfect for avocado toast. 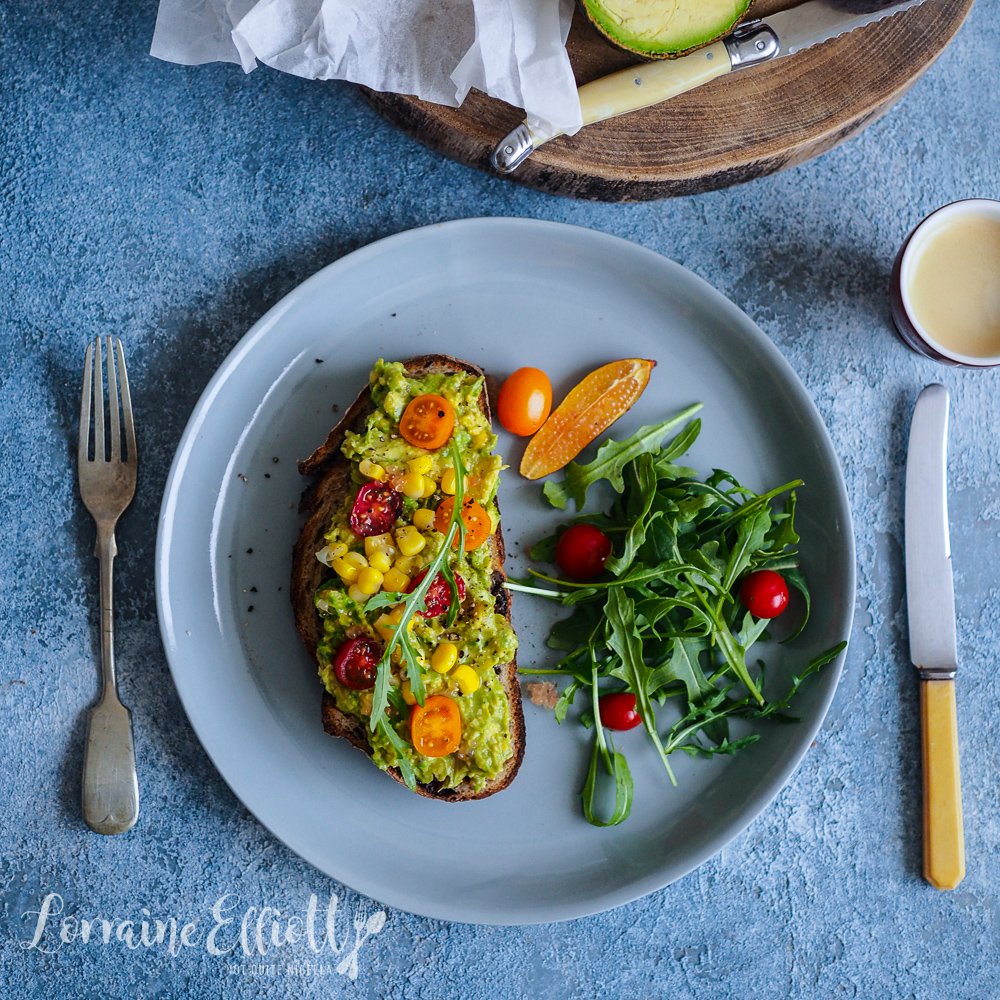 Inspired by a recent cafe visit to Cherry Moon in Annandale. The avocado toast there had finger limes and I was struck by how well finger limes and avocado went together. Obviously lime and avocado go well together but finger limes with their textural pop were dare I say even better. I actually had some finger limes in the freezer and took them out (they freeze really well so if you have a surplus and you can't use or eat them all freeze them). 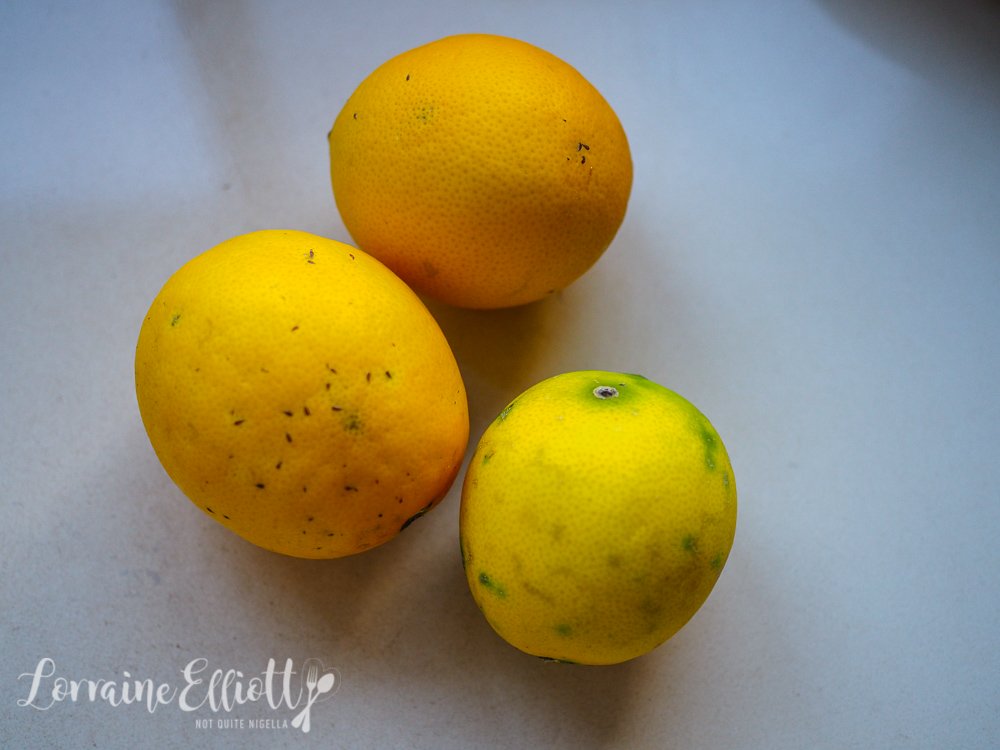 I've got some other things to show you as part of the In My Kitchen series hosted by Sherry although I'll refrain from showing you what else is in my freezer haha. I was gifted a precious lot of Meyer lemons from my lovely friend Monica. I find home grown lemons are usually amazing because they are so juicy. Commercial lemons are really hit or miss and mostly miss. Commercial lemon skins are really thick and sometimes they yield as much juice as a tight-fisted lime. Monica's Meyer lemons were so aromatic (almost yuzu floral), full of juice and with lots of seeds for jam making pectin. 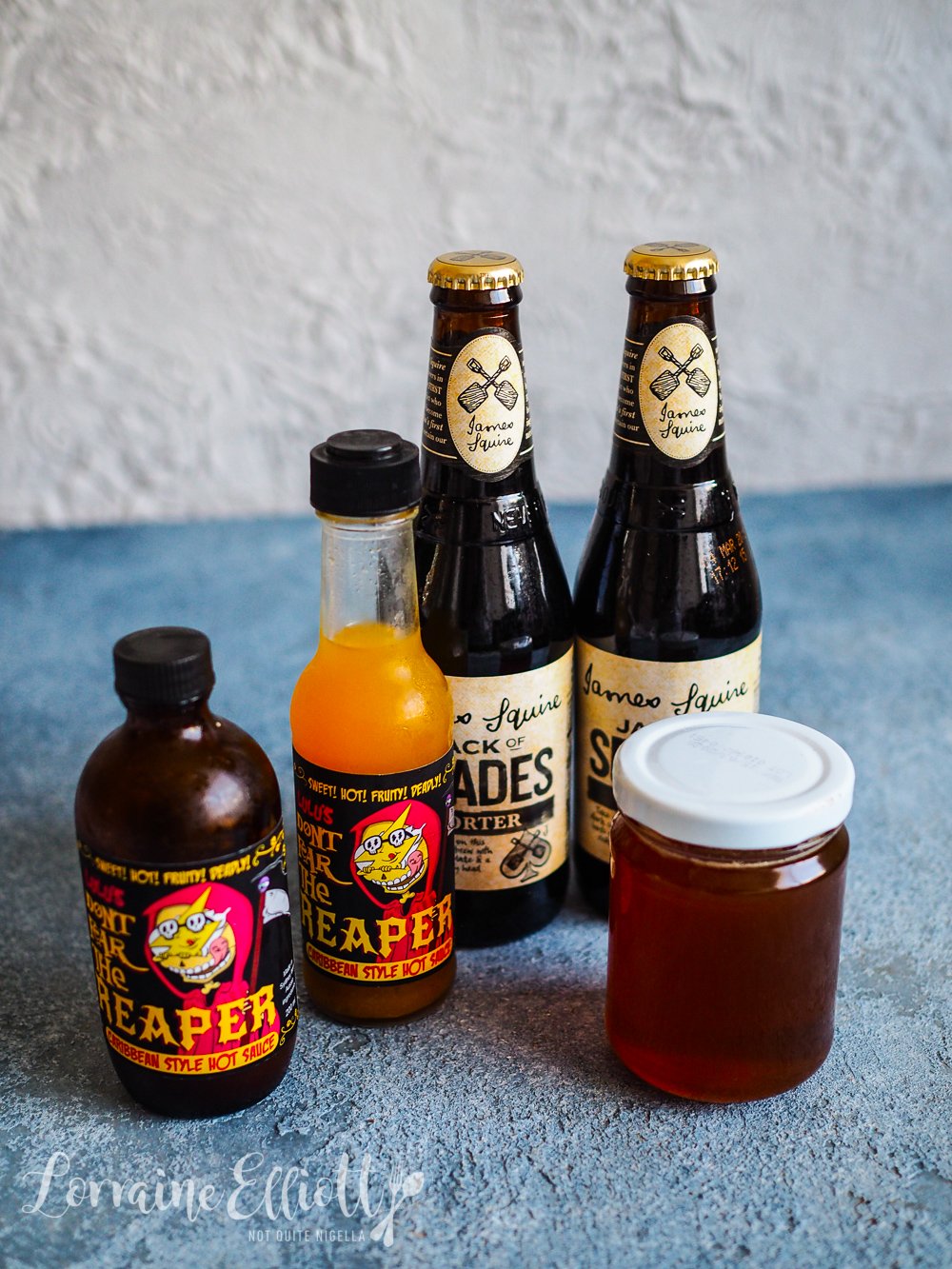 The next picture is also from Monica and her husband Marco. He's a beer brewer and he kindly gave us some porter beer which went down a treat when the guys got together. She also made some chilli honey-it looks innocent but it has her home grown Carolina reaper chillies in it and it really packs a punch! She also makes some fabulous Carolina Reaper sauces made from her garden chillies which is fruity but tempered with enough reaper so that it is spicy but doesn't blow your head off. You can buy it at P&V Wine + Liquor Merchants in Newtown. 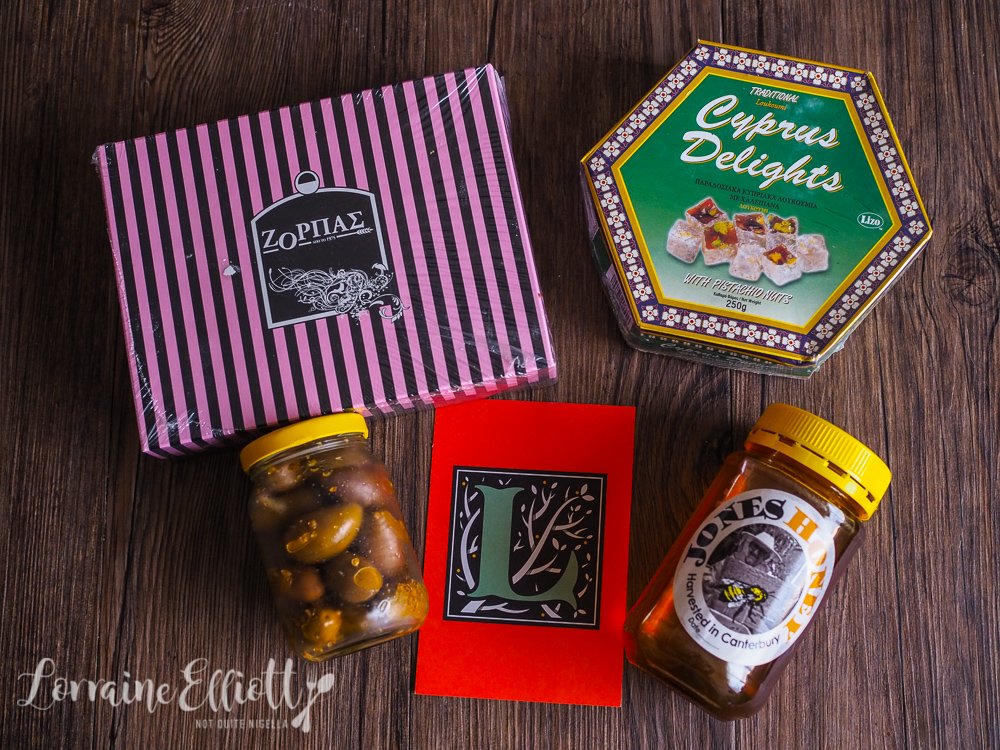 Next is a generous haul from my friend Valentina, the talented woman who had us over for a 9 course Cypriot feast. She's gifted me a bag full of goodies even though I was a guest at her home! There are fat green olives, Jones raw Canterbury honey from her and her husband's beehives, Cypress delight (like Turkish delight) and melting almond cookies with icing sugar. Not to mention a big bag of tangelos that I transformed into tangelo cheesecake!

I'm eagerly making my way through everything. With the avocado toast I seasoned the avocado with a tablespoons of Marion's Kitchen's Coconut Sriracha (from my last In My Kitchen installment). It's addictive stuff and you only need a little to flavour a whole avocado. I use it on so many things and have used half the bottle already!

So tell me Dear Reader, how often do you eat avocado on toast? Have you got any finger lime recipe ideas?

Step 1 - Mash the avocado with the coconut Sriracha until smooth leaving behind a few small chunks. Stir in the corn and most of the finger lime beads (leaving some to place on top of the toast). Divide among slices of bread and top with some finger lime beads, cherry tomatoes and rocket. Season with salt and pepper. 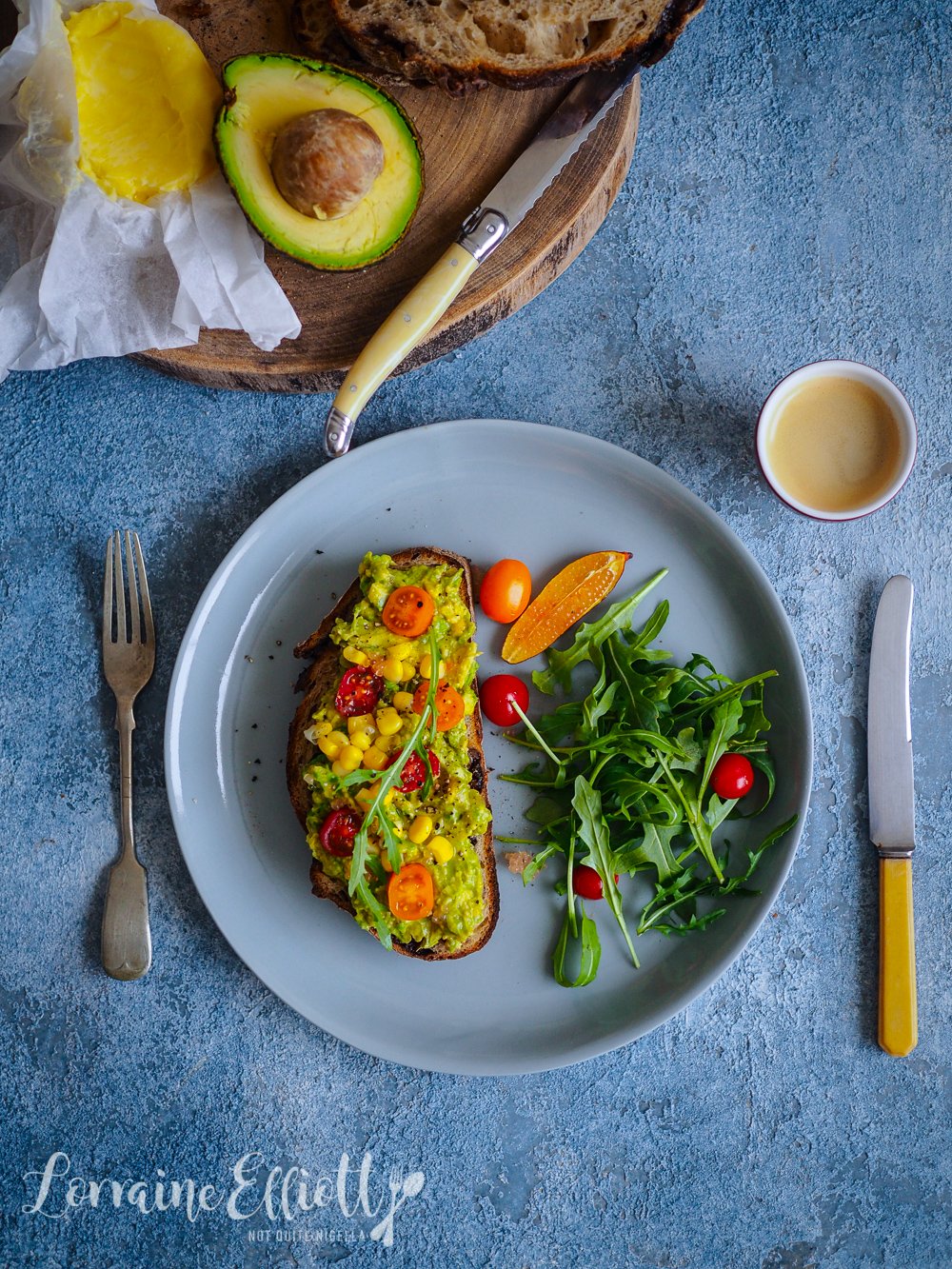