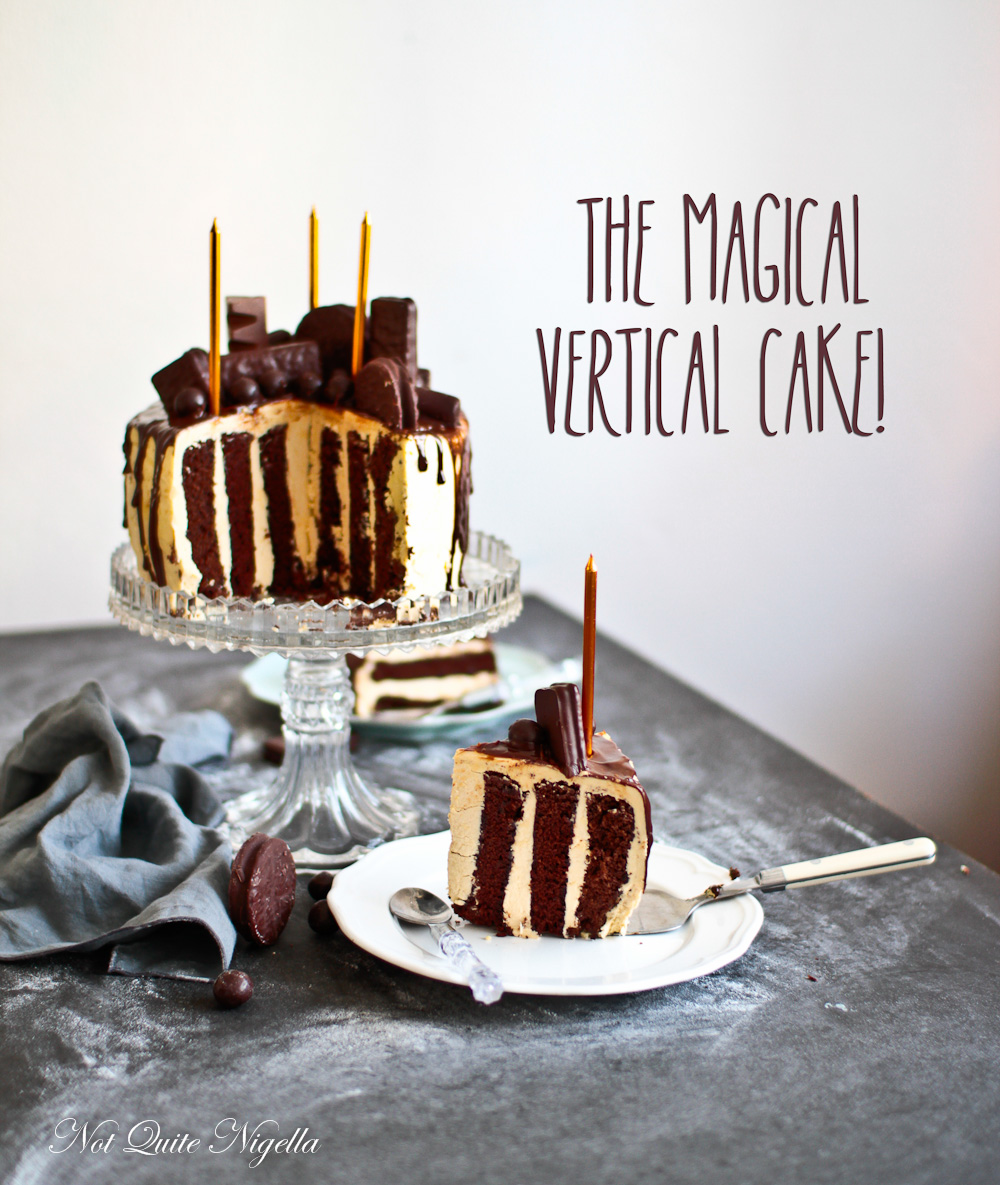 A logic defying vertical cake? Surely not! This cake will have your friends cocking their heads to the side wondering how you managed to achieve such a feat. But you know with some clever rolling, you could be making your very own vertical cake. With instructional video!

You can customise the cake for any sort of flavour-this one is a chocolate sponge with a coffee buttercream. I will admit that it does require some nerves of steel but if you follow my directions where I learned my lessons with Swiss rolls (always, ALWAYS sprinkle parchment with icing sugar!!) and warm up your eggs in hot water then your Swiss roll sponge will roll like a dream.

This cake was made for our friend Viggo. We went away for his birthday in the Blue Mountains a couple of weekends ago. I didn't mention what sort of cake it was when I put it down, I described it as a chocolate coffee cake and decorated it with biscuits and chocolates so that people could pick off what they liked. Everyone seemed to like the retro selection on top "Is that a mini wagon wheel?" he asked. "No it's the regular sized one, they've shrunk!" I answered. And when I cut into it I knew his technical mind would be quickly thinking, "Now how was this done?" He seemed really chuffed with it which was very nice. 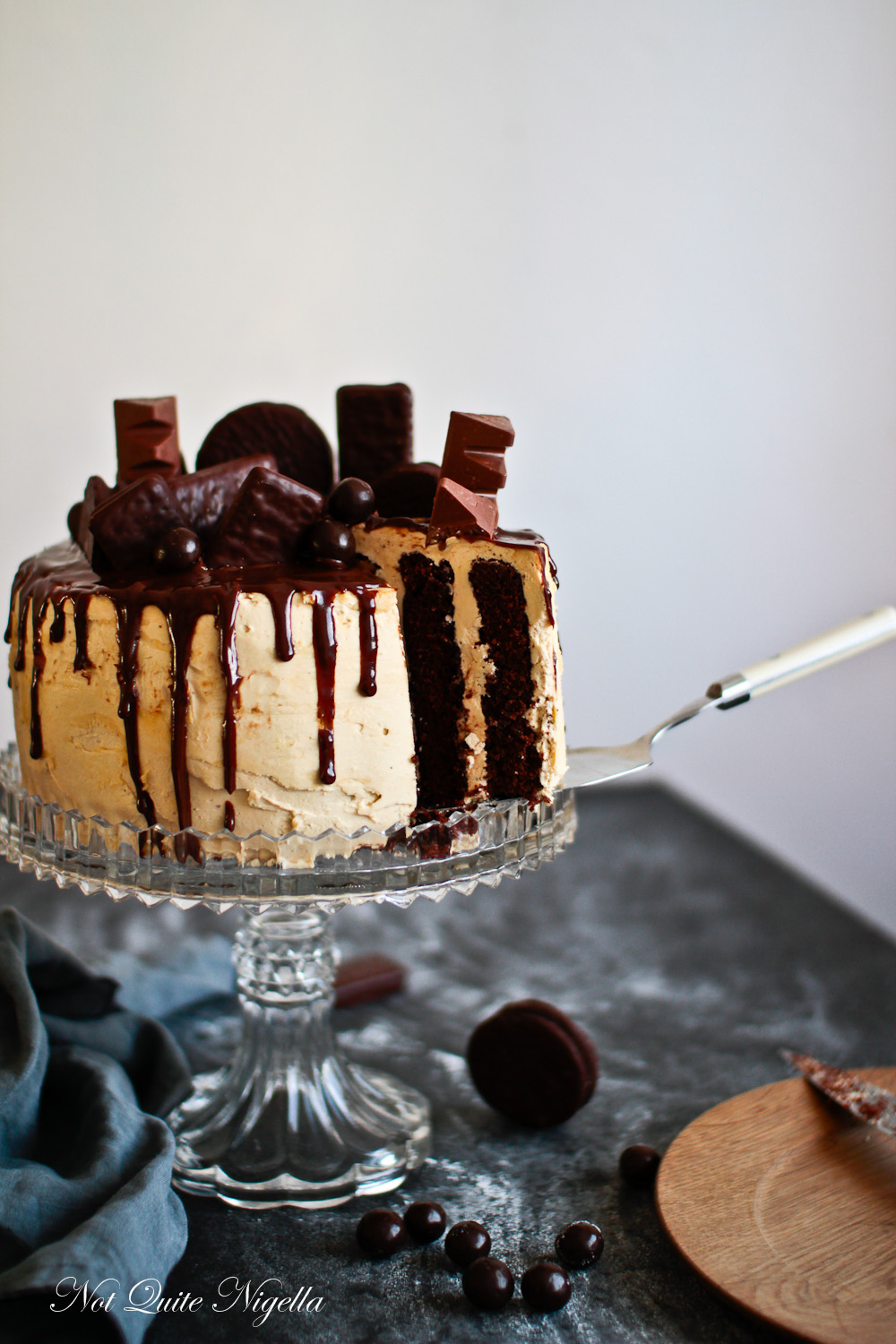 Mr NQN and Viggo are Scandi twins - almost. They've got different personalities but are born one day and one year apart and have similar jobs. The weekend was a birthday surprise as Mr NQN and I are going to be away on his actual birthday (which is the day before Mr NQN's birthday - Mr NQN just wanted to be on holiday on his birthday, who can blame him especially when his birthday coincides with Winter and a Northern Hemisphere Summer?)

I really do love doing things for my friends because they will give anything a go for the blog, especially foods or new hobbies. The night before we left for the Blue Mountains I booked us into another escape room in The Rocks. For those of you unfamiliar with them, they're like a physical adventure game where you are locked in a room and you need to solve puzzles and find clues to get out. Louise, Viggo, Mr NQN and I love them but I was excited to see if Belinda would like it too. We are always getting up to adventures that I was sure that she would love it. 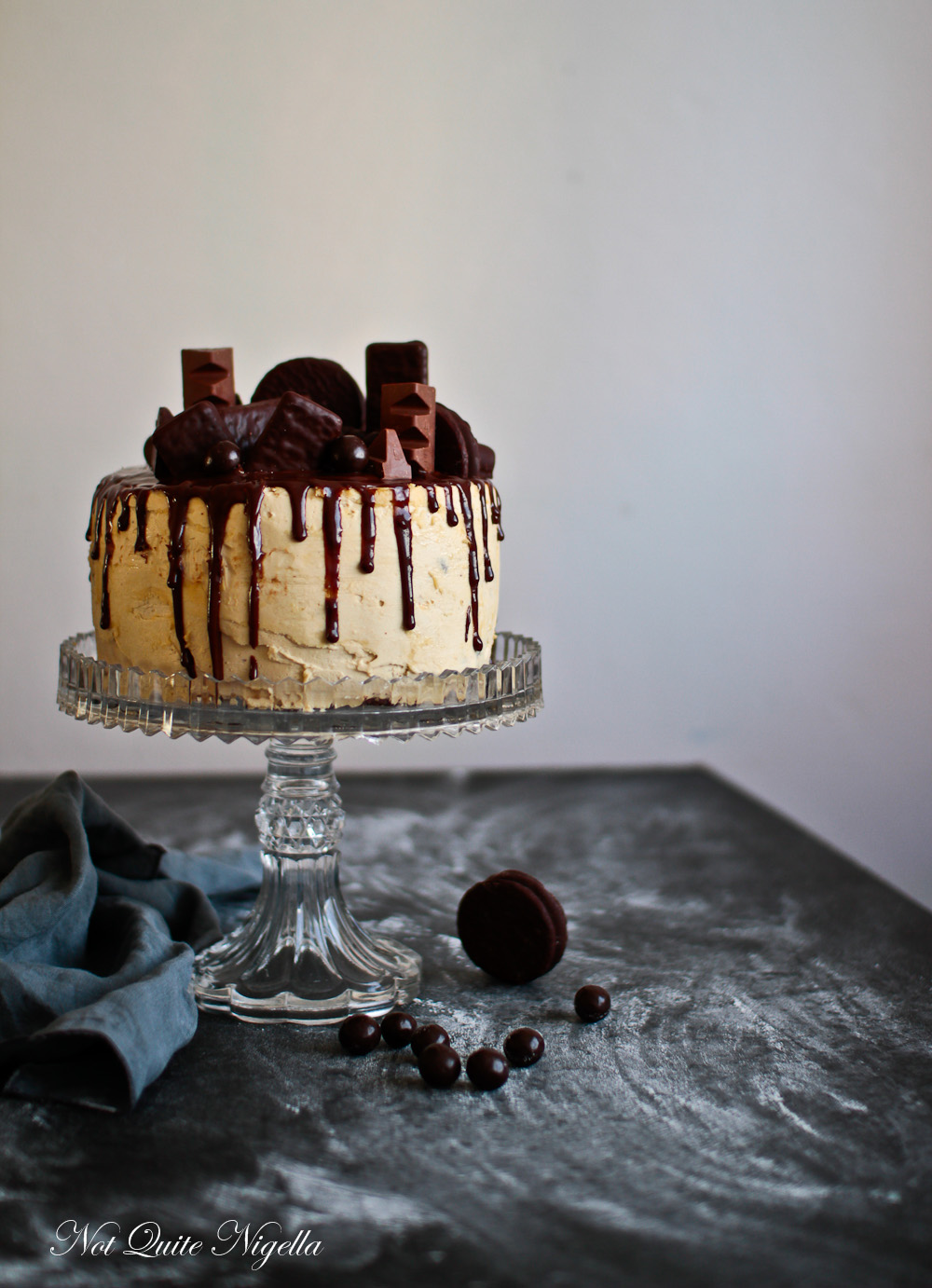 Poor Belinda was a bit terrified of some of the situations, mainly the pitch black rooms and solving the riddles. I think it was too close to her job as a child protection officer and while she said she found it ok, I think she was trying to be brave about it. Afterwards we drove an hour to try a Seinfeld inspired soup truck. So if your friends are good enough to drive an hour to eat soup while watching Seinfeld just because you heard it was good, then you make them cake for their birthday!

So tell me Dear Reader, do you think you would like an escape room? Did you work out how the vertical cake was done? And do you think foods from childhood have shrunk or have we just gotten bigger?

P.S. I'll let you in on a little secret-the vertical cake is really just a giant Swiss roll cake turned on its side! The nerves of steel required are really to create the larger version of a Swiss roll but it's a wonderfully effective way of making a cake with no special equipment needed!

An instructional video on how to make a vertical cake

*If it is winter where you are, place the eggs in very hot water for a few minutes. This will help them whip up thicker and fuller.

**To make cake flour, place two tablespoons of cornflour/cornstarch in a measuring jug and then fill to 1 cup measure using plain all purpose flour

Step 1 - Preheat oven to 180C/350F. Have two 20x30cm baking tins ready and line them both on the base and sides with parchment. Whisk the eggs and sugar together for 5 minutes or so until voluminous and fluffy. The colder the eggs, the longer it will take and they won't whip up as thickly if they are cold. I learned this through trial and experience ;) 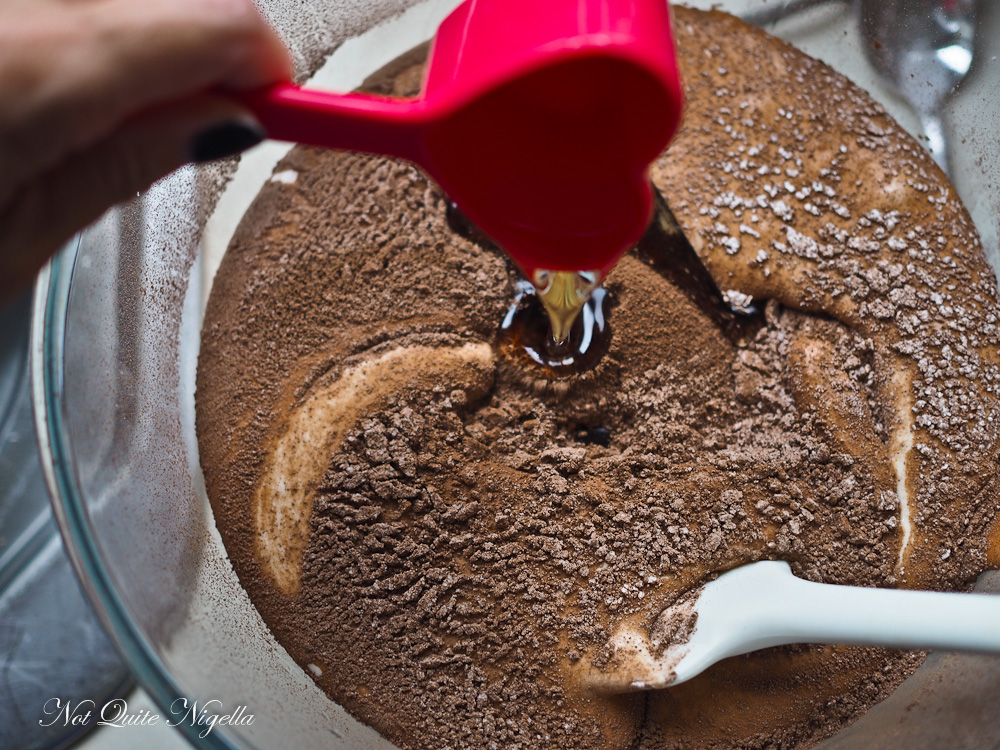 Step 2 - Sift in the cake flour, cocoa and baking powder from a height and add the oil and fold the mixture gently so that the flour and oil is incorporated. Divide the mixture among the two prepared tins. Bake for 10-12 minutes or until the centre is cooked and springs back. The cake will start to shrink from the sides once it is cooling. Let it cool for 2 minutes. 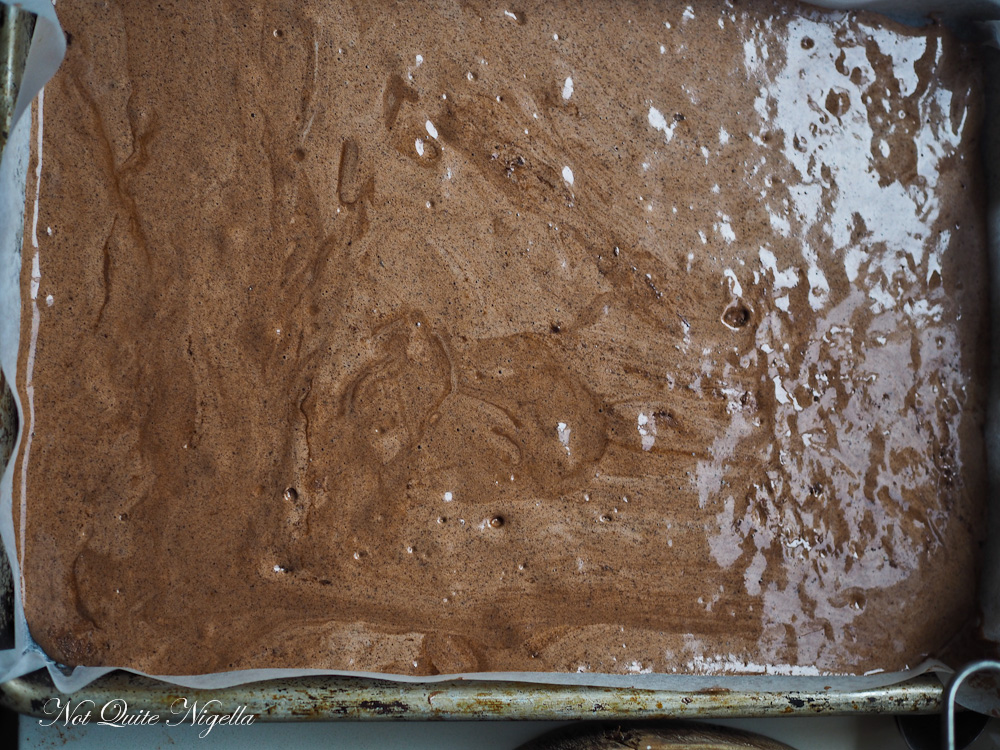 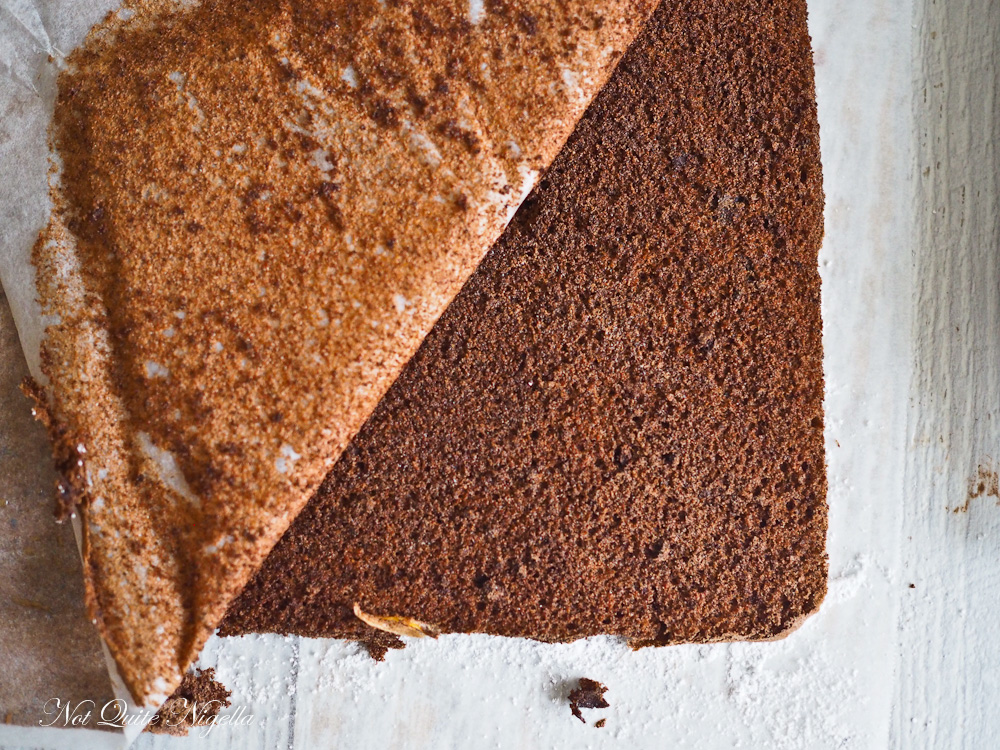 Step 3 - Dust 2 large sheets of parchment with icing sugar and carefully place the cake face side down onto the icing sugar lined parchment. Slice the cakes in half lengthwise using a ruler. Taking one short end carefully roll each cake up rolling the paper with it. Allow to cool like this. 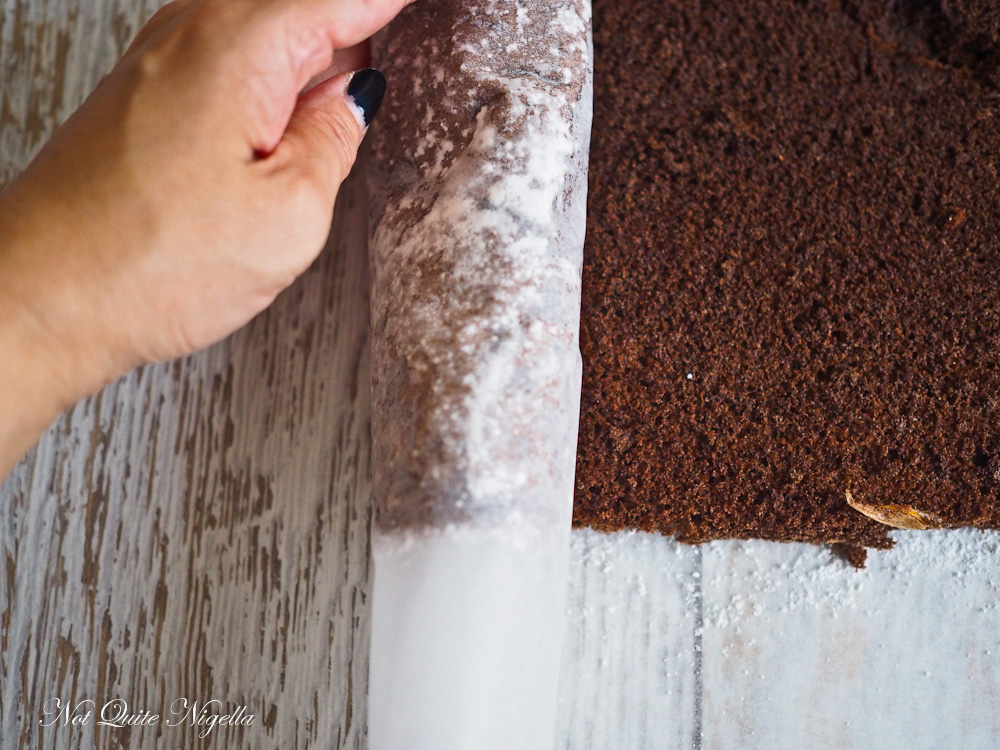 Step 4 - While it is cooling, make the buttercream. Beat the butter in an electric mixer on a low speed until it is white (3 out of 10). Add the sugar and coffee in two lots and keep beating on the same speed for another 8-10 minutes. It is ready when you don't feel any sugar crystals between your fingers. Place some of it in a large piping bag. 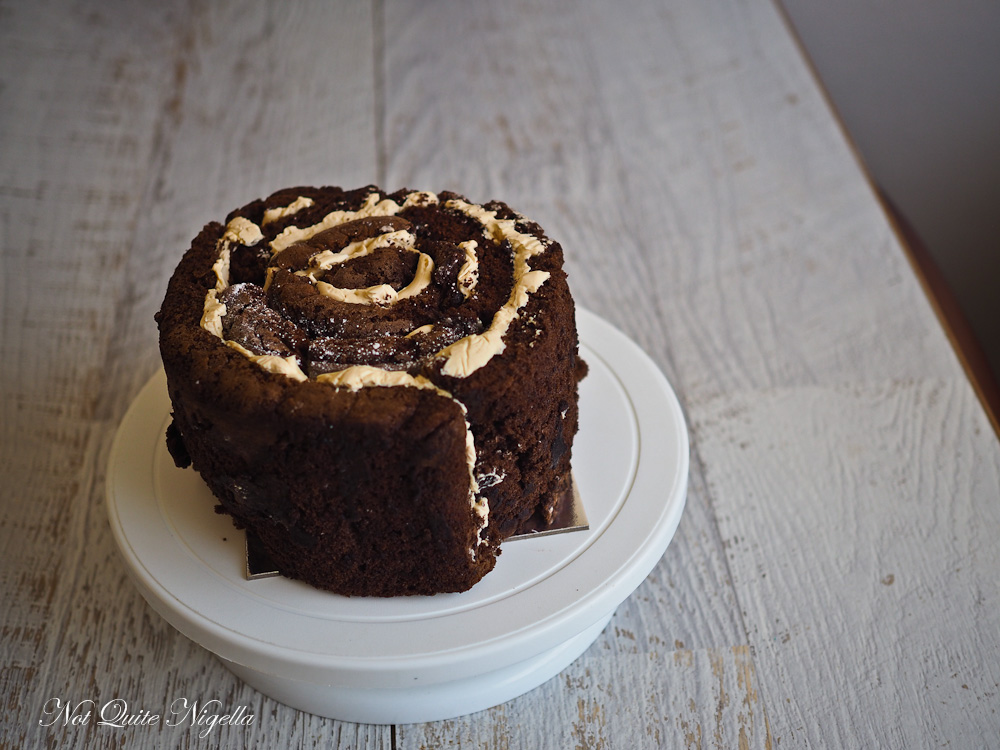 Step 5 - Unroll the cakes carefully and pipe the buttercream on top of the four unfurled rolls. Smooth it with a palette knife and roll up the cakes. Use any broken ones first-they will be in the centre and attach them end to end so that they form a large Swiss roll. Turn the cake so that it is standing up and place in the fridge for a few hours or overnight, covered well. 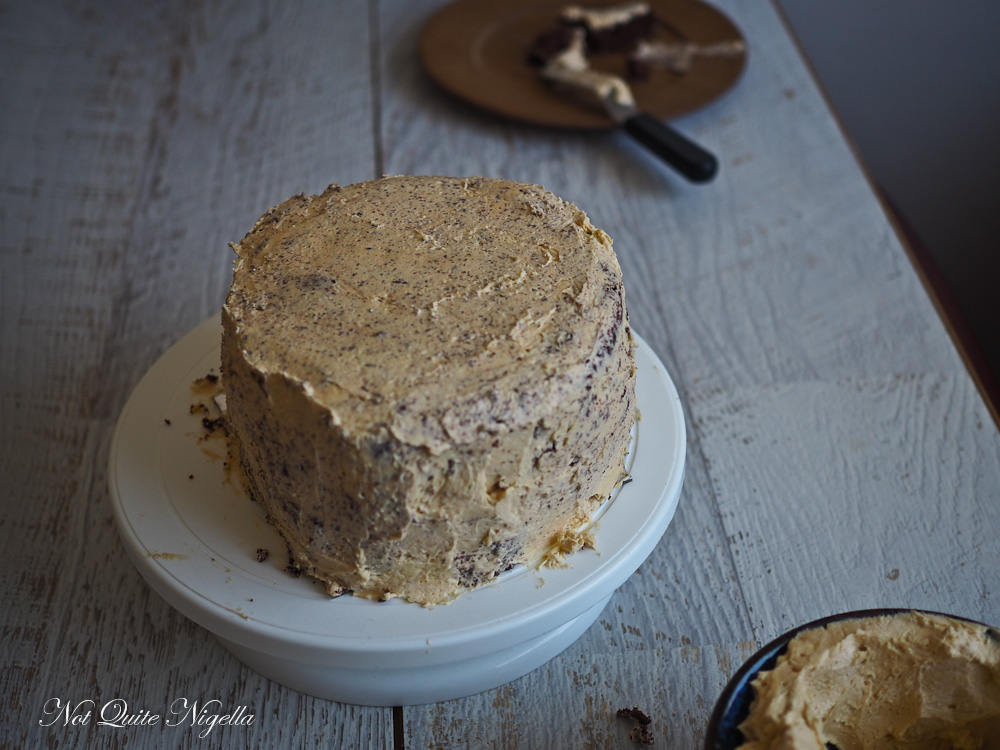 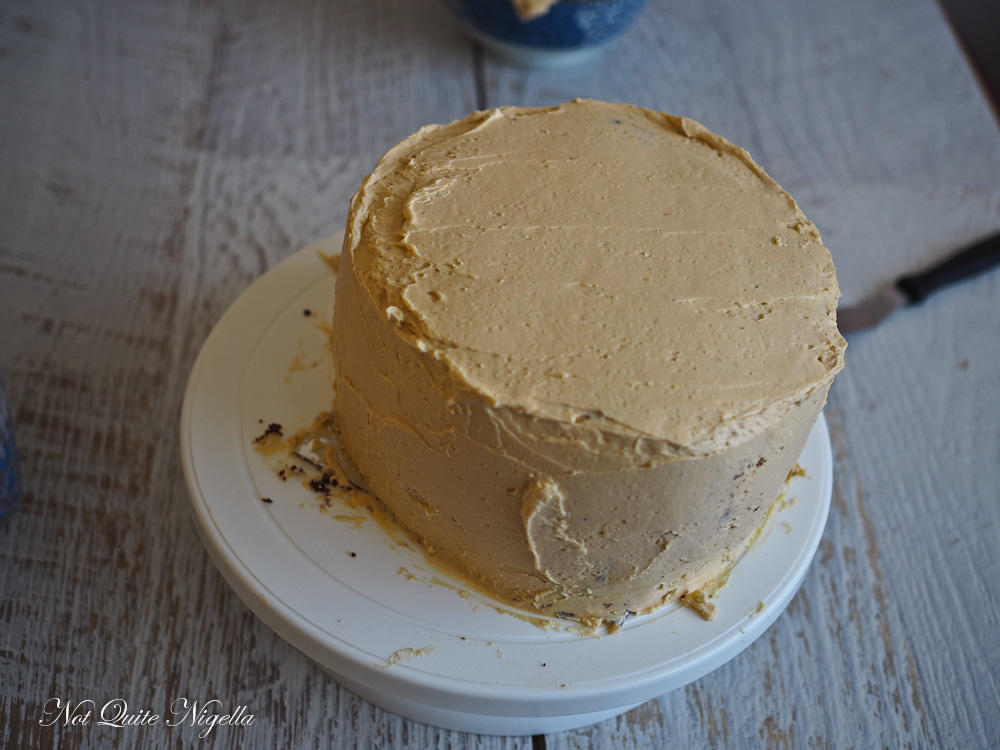 Step 7 - Melt the chocolate and cream together until smooth. Using a teaspoon make drips along the edge and then spread out on top. Top with chocolate candies and cookies. 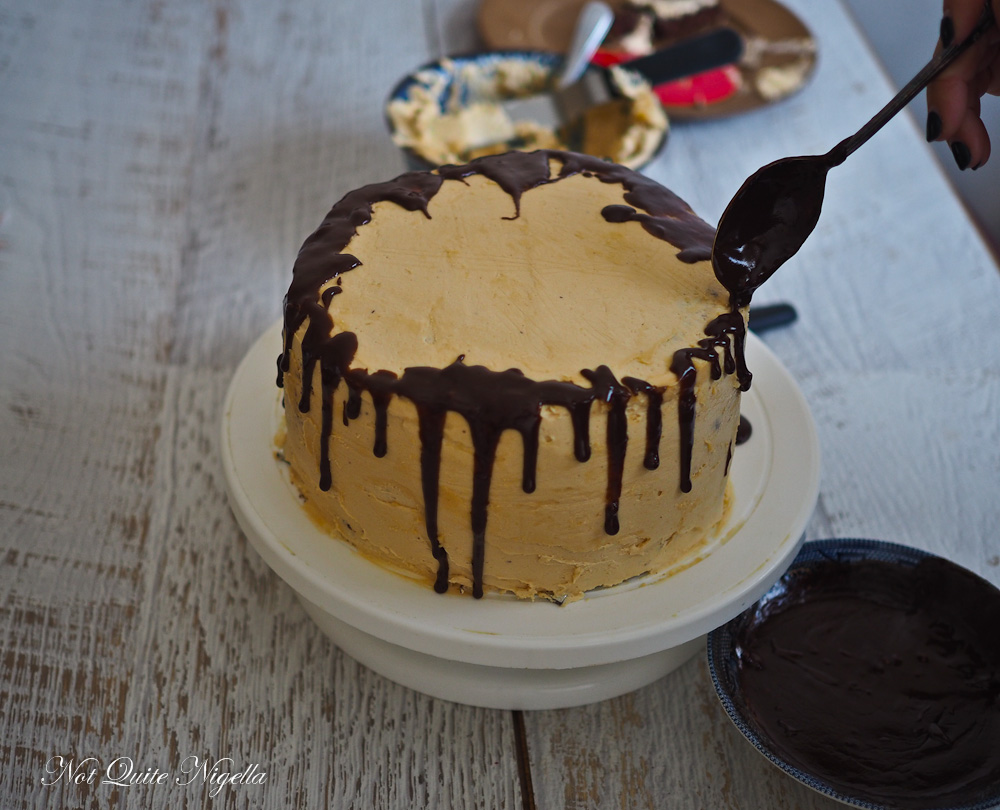 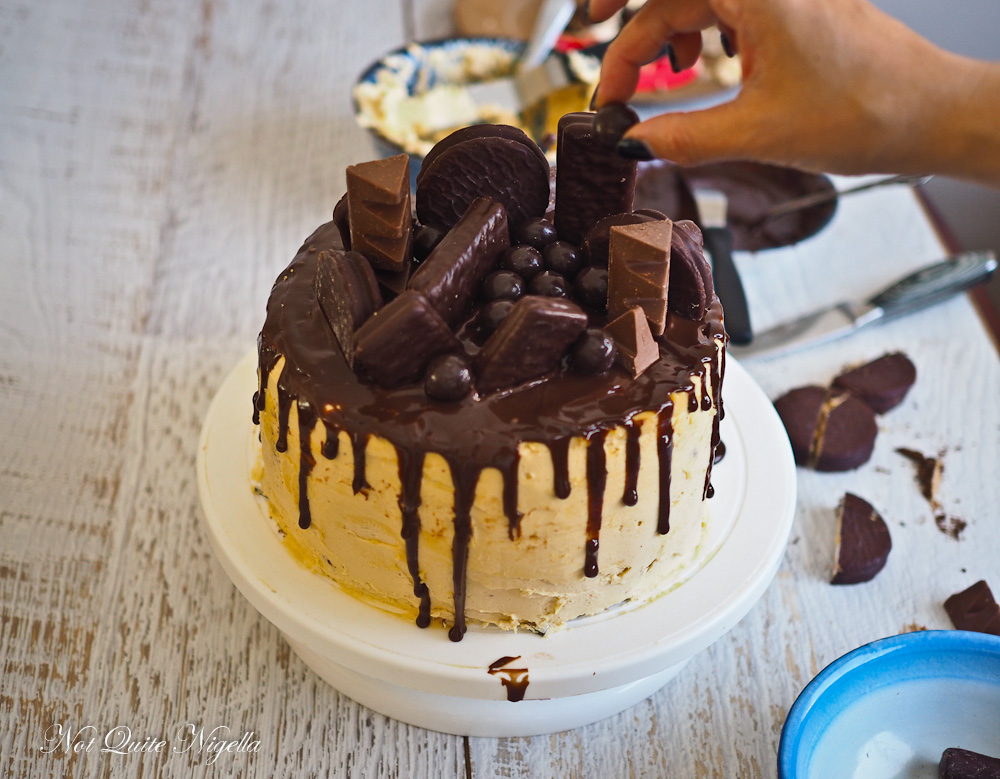