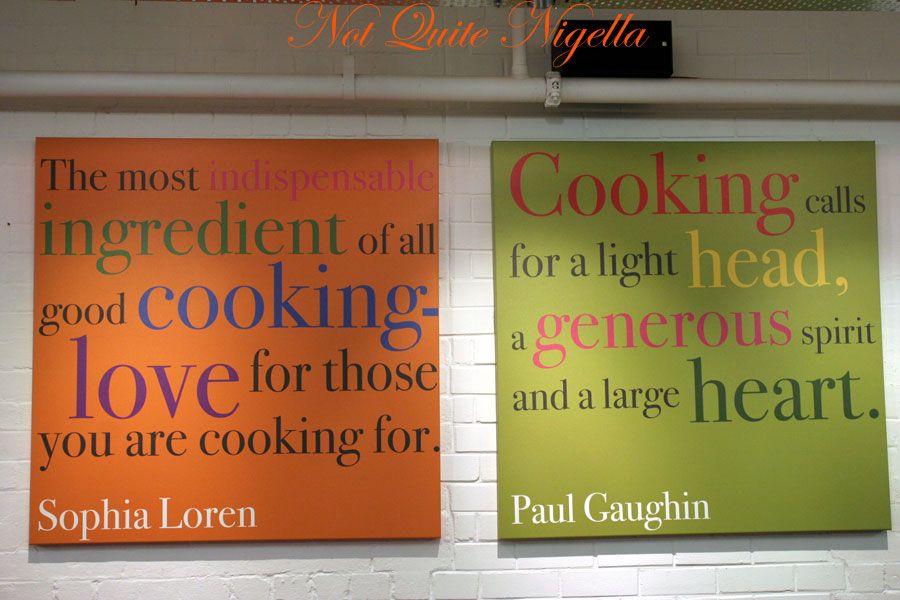 Team building at work is a necessary evil. You need a cohesive workplace and in most offices people have a closer relationship to their computer than they do to a colleague (myself included). A friend told me recently that her workplace had started organising some team building exercises but I was shocked to find out that they were actually Pole Dancing lessons! Of course, most of the female population at work opted out and of course the male population who weren't invited to attend were the ones that expressed the most interest but only as part of the audience and not the actual pole dancing (men on poles? Hmmm ...). Another friend told me that her group head had actually arranged for the group to go to a Korean sauna together for a scrub down and massage and that the Korean sauna in question was a nude only sauna. Call me crazy or conservative but I don't need to see that much of my colleagues... 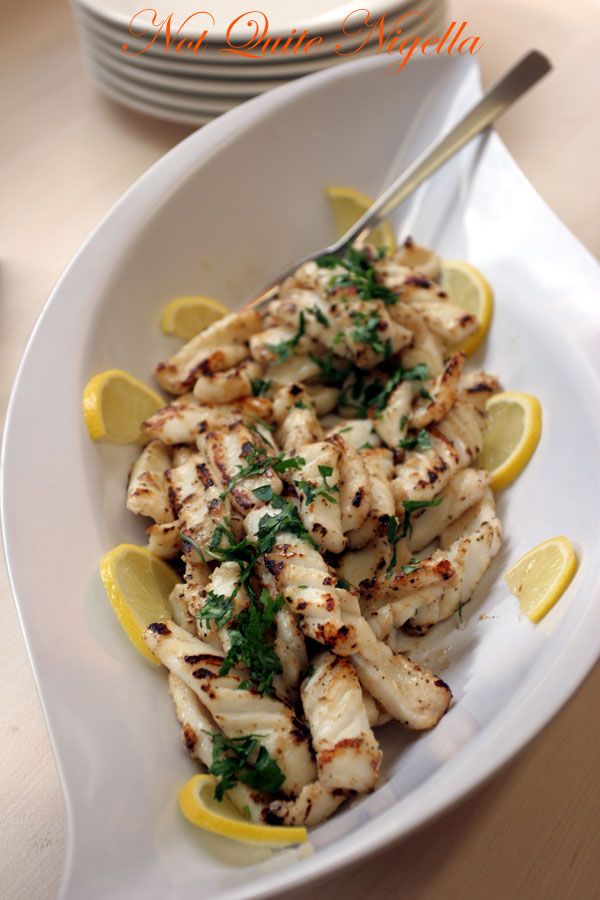 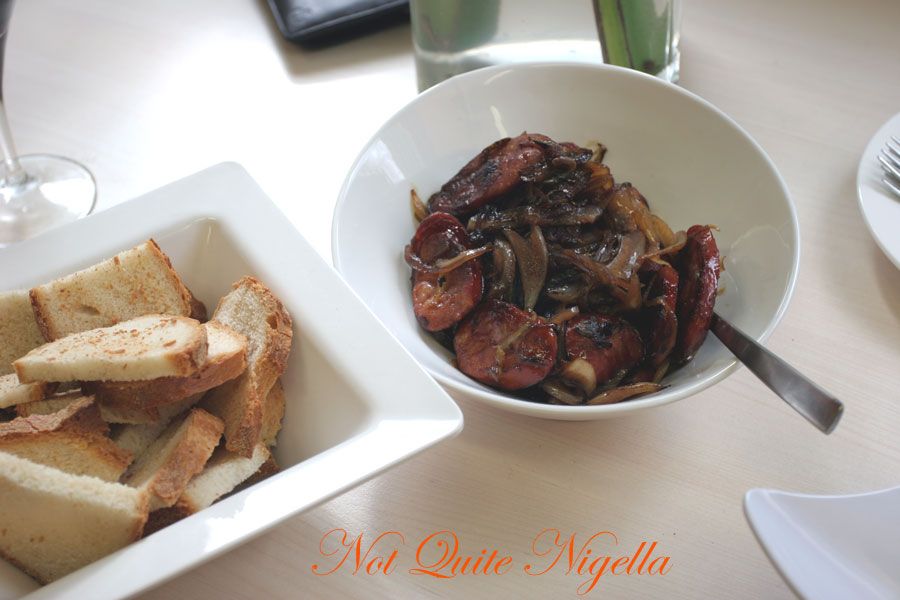 In a more suitable and (thankfully less nude) vein, this afternoon I am bonding with other media lovelies at Cheeky Food Group's Surry Hills office for their Team Building Cooking Class and learning a thing or two more about cooking. I'm given a logo'd black apron and a chef's name with my name on it and a drink. Whilst mingling and chatting we're offered some chorizo with caramelised onion and some lemon squid. The lemon squid is beautifully tender and heady with lemon and salt and the chorizo is ambrosial with the soft finely sliced onion. 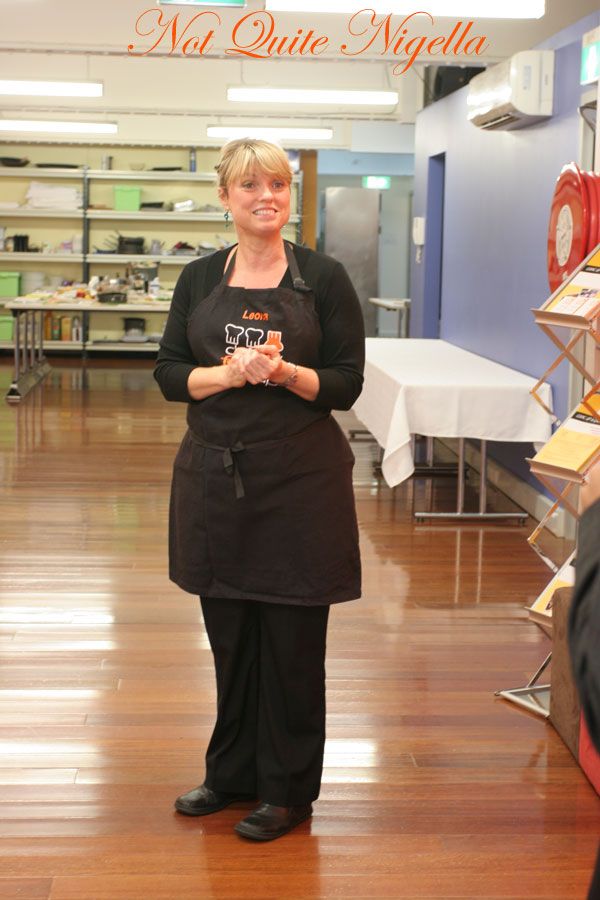 Leona from the Cheeky Food Group

Leona, the owner of Cheeky Food Group, introduces herself and tells us a little about why she started it. She prefers interactive classes, not ones where the chef stands at the front whilst the audience are either bored listening or twitching to pick up a knife. Leona's other philosophy is that you should use whatever is available and that you don't necessarily need to go out and buy specialist equipment or ingredients if there is something just as suitable available. I am excited to learn that these are fully interactive classes and that the classes give you a lesson in knife work. For all of my home cooking, I've got a morbid fear of knives and use one accordingly so the knife work class is something that is sorely needed on my behalf. We're also given safety tips on how to behave in a large kitchen which helps avoid any potential disasters. 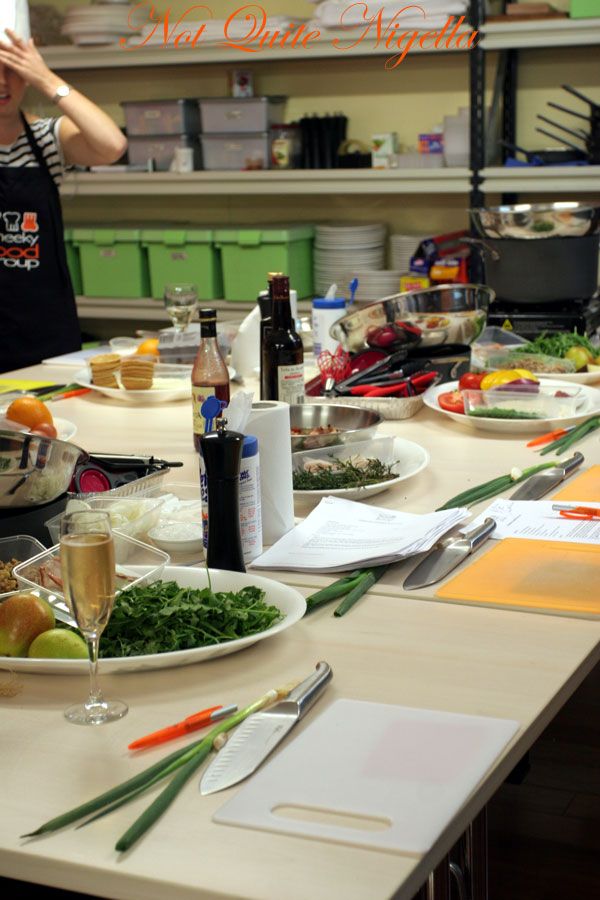 We're cooking 4 dishes over the next few hours with a Spanish theme and she splits us in two groups although there is no competition and everyone is friendly and helping each other out. Firstly, a Pear and Asparagus salad with walnuts pancetta and Manchego cheese and a pear dressing with fresh pureed pears in the dressing itself. Then a pork loin with a Pistachio pesto crust, heady with rosemary and thyme and topped with pancetta and of course, since the theme is Spanish food, a seafood Paella. For dessert we're making chocolate tarts with sour spiced black cherries and a Pedro Ximenez sherry sauce. Having never made paella, I'm particularly excited about this as I have been dying to make it.

Everything is set up for us and we start with the knife work class. Leona spends 20 minutes teaching us the various steps starting with the "hula" motion needed to be able to chop without slicing off a finger and be able to look up and talk to someone whilst still chopping (although I think that's at a bit more an advanced level and beyond my current capability). Before long, we're "hula-ing" away and as she points out, no-one has ever had an accident in their classes which is the most important thing. 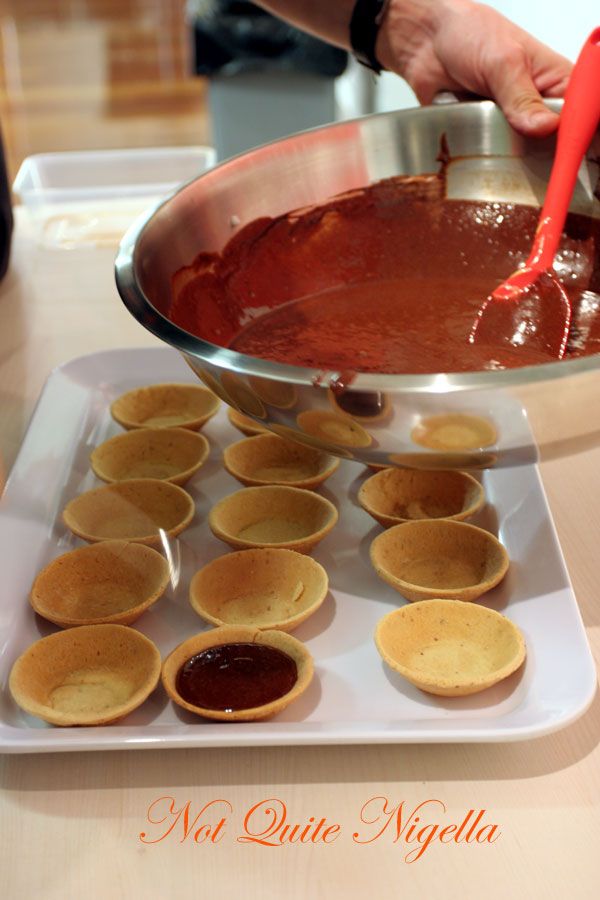 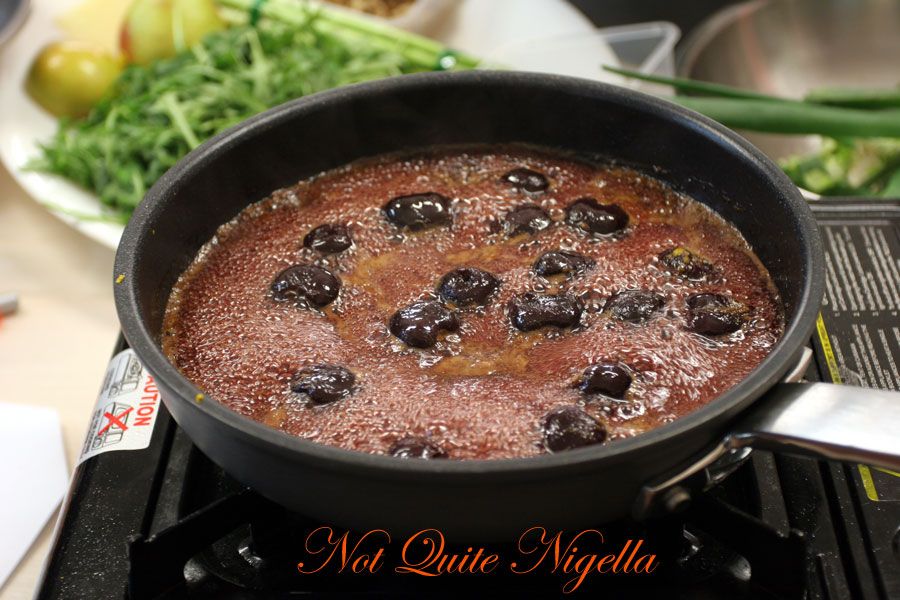 We then start on the chocolate tart as that needs to set so we're busy whisking and separating eggs and sugar and melt chocolate with cream. In one pan we place black cherries with some star anise, orange peel, sugar and some Pedro Ximinez Sherry to reduce down. Once the chocolate filling is made, we spoon these into tart shells (although Leona suggests that you could put them in cups too) and top with the cherries. Her assistant Jason, whisks these off to be refrigerated before coming back and showing us how the seafood. 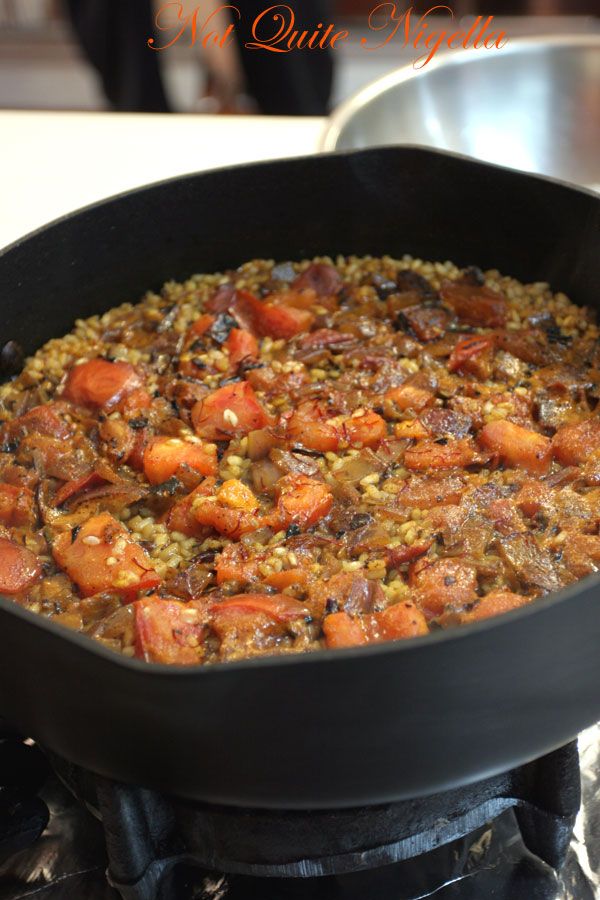 Paella absorbing the stock, prior to seafood on top

We're shown how to remove the beak from the octopus and how to treat vongole to remove the grit from inside. We brown the prawns and octopus, then fry off onion, garlic and tomatoes, add some paprika and then the rice and the seafood stock prepared earlier. These are cooked in large pans but not paella pans which heartens me somewhat as that was always what stopped me making paella in the first place. The thing about paella we're told is that once the rice and stock are added, unlike risotto which requires a constant stirring motion, one should not stir the rice at all, that is the worst thing you can do with paella. After the rice has absorbed a lot of the stock, all of the seafood is artfully arranged on top. 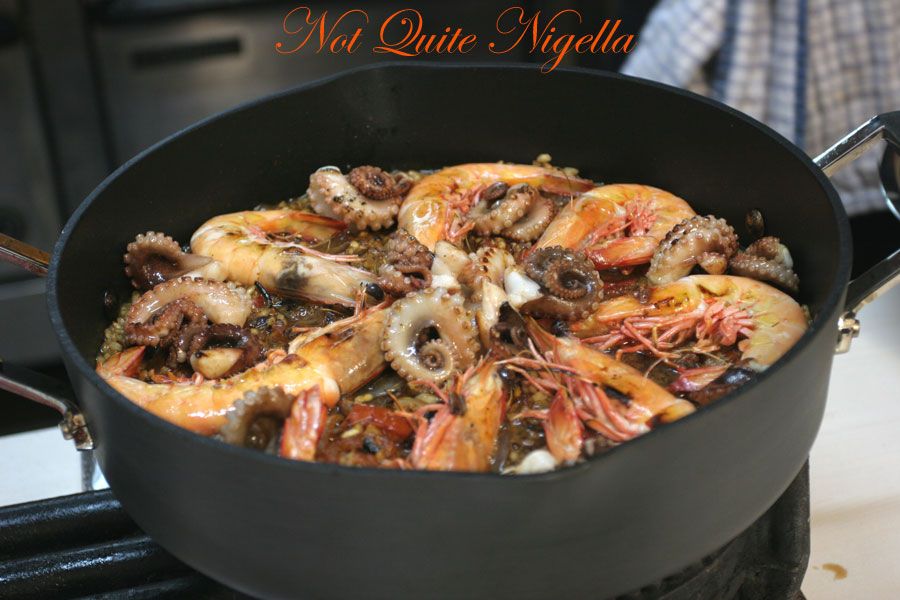 We then make the dressing and the pesto. Both taste delicious and the pesto is applied to two long loins of pork which are then topped with pancetta and placed in the oven. I've been tasked with the job of frying the pancetta to a crisp for the salad and the salad is assembled with the rocket, thin pear slices, pancetta, walnuts and dressing. It's terribly easy but delicious. 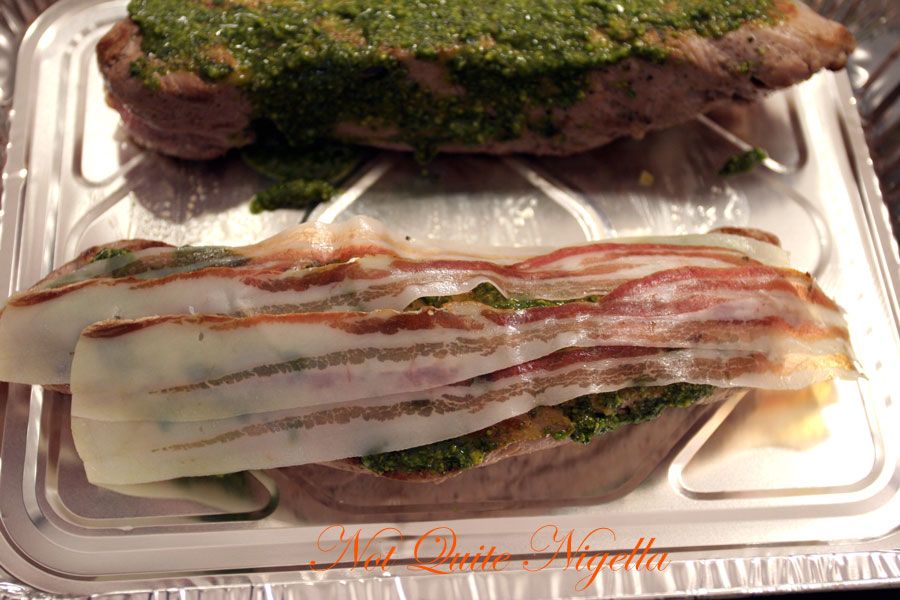 Pesto smeared across the top of a pork loin and then it is topped with pancetta and popped into the oven. 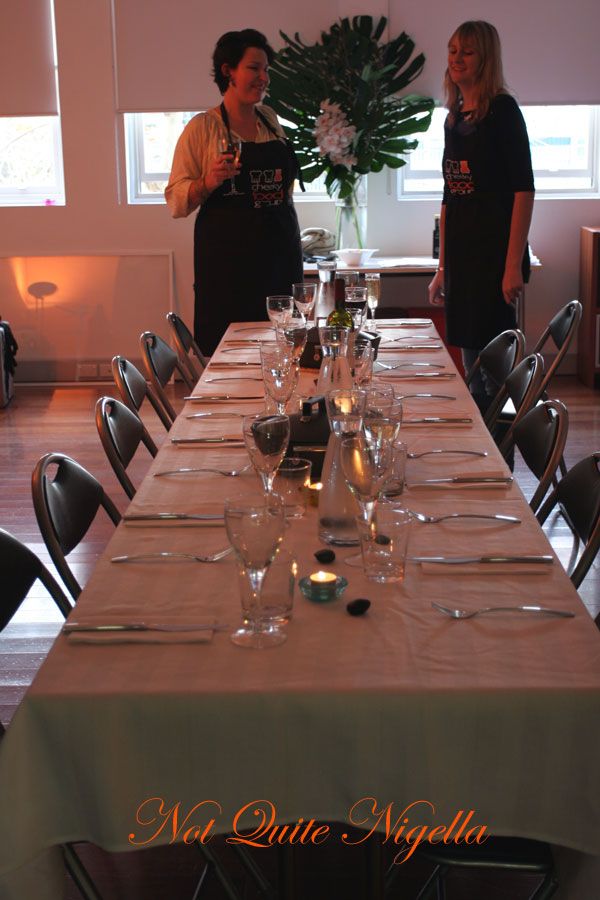 We look around and see that a table has been prepared for us to feast on all of the goodies we've made. Sitting down we help ourselves to the food. 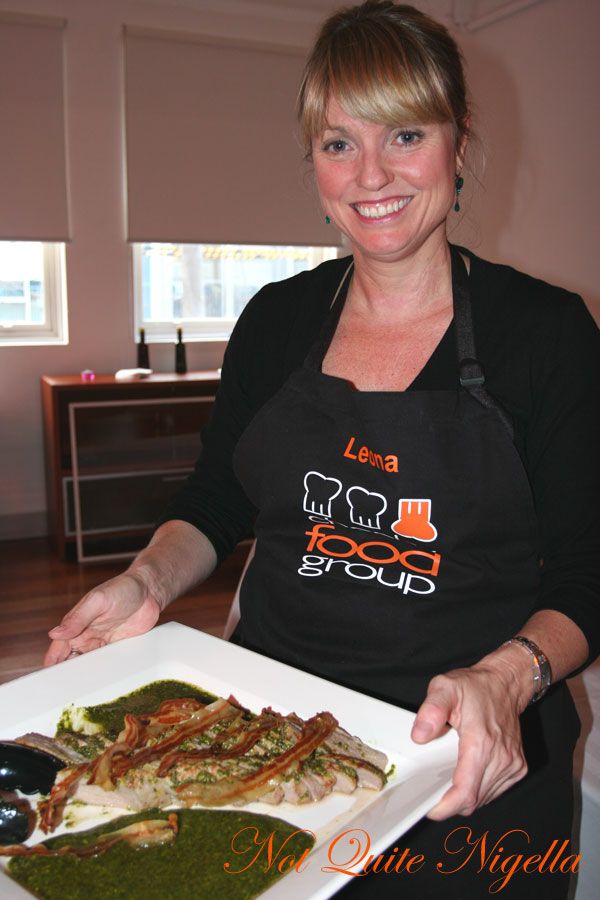 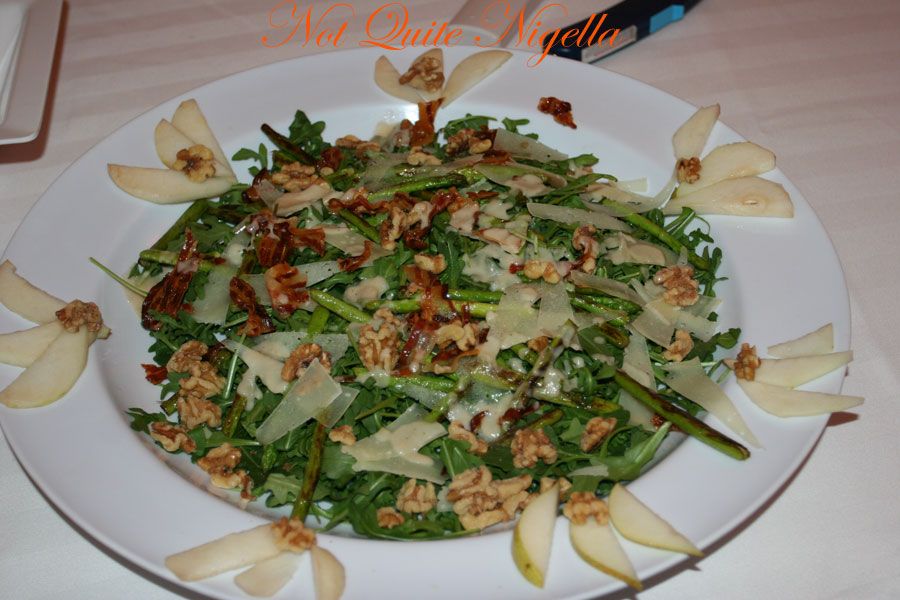 The salad is gorgeous, the delicious pear dressing goes perfectly with the cheese and walnuts. 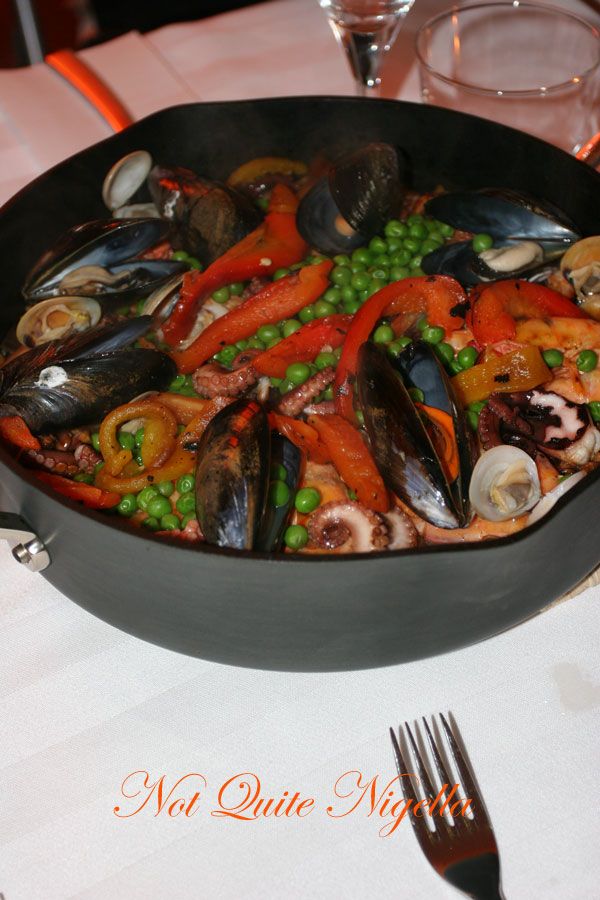 The paella is heady with freshly cooked seafood and the perfume of the sea and the octopus is my firm favourite as this too is not in the slightest bit rubbery. 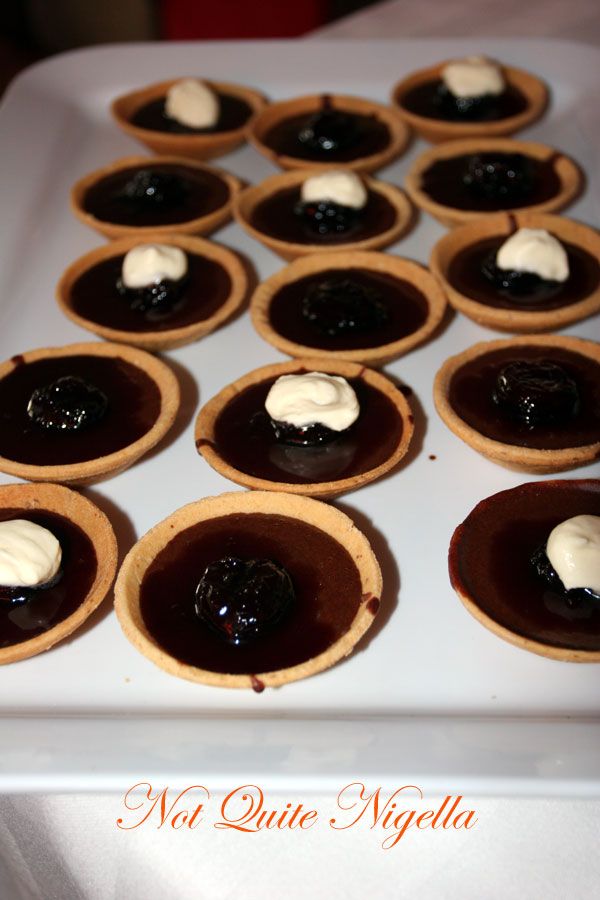 The chocolate mousse tart is lovely and crunchy on the outside but the soft almost liquidy filling strong with dark chocolate and sherry with a plumped sherry soaked and spiced cherry sitting on top.

Everyone is enjoying their food and wine and as expected, bonding suitably and might I say appropriately without a stripper pole in sight!