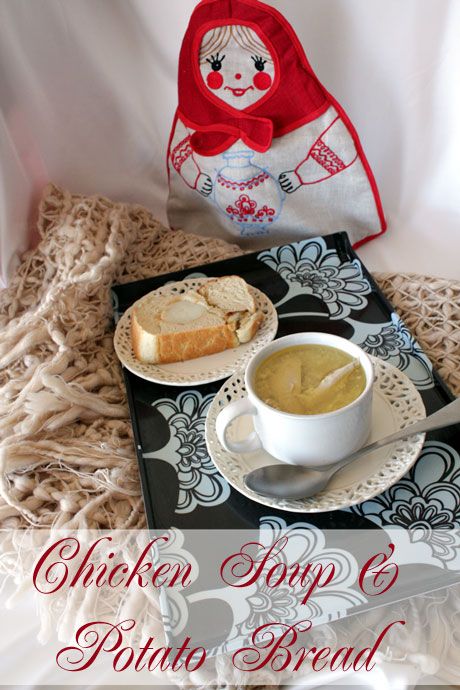 OK I'm not being serious, this is not only just for Shut Ins although sometimes during the cold of Winter, I definitely feel as though I qualify. I am not sure why there is such a stigma to hibernation, the bears do it and you hardly hear cries of "anti social bears" and mutterings that there's something wrong with them. If you feel like the world is just too cold or cruel a place and that stepping out the door would be as appealing as sawing your own arm off, these recipes are for you. And I don't want to hear from people who say that they've never felt like that and that they love socialising and interacting. Don't get me wrong I do too. But there are just some days that you just want to barricade yourself indoors. An example of why everyone at some stage has felt this way is the great Australian tradition of a sickie. Sometimes you just cannot be bothered and slobbing around the house is the best you can do. 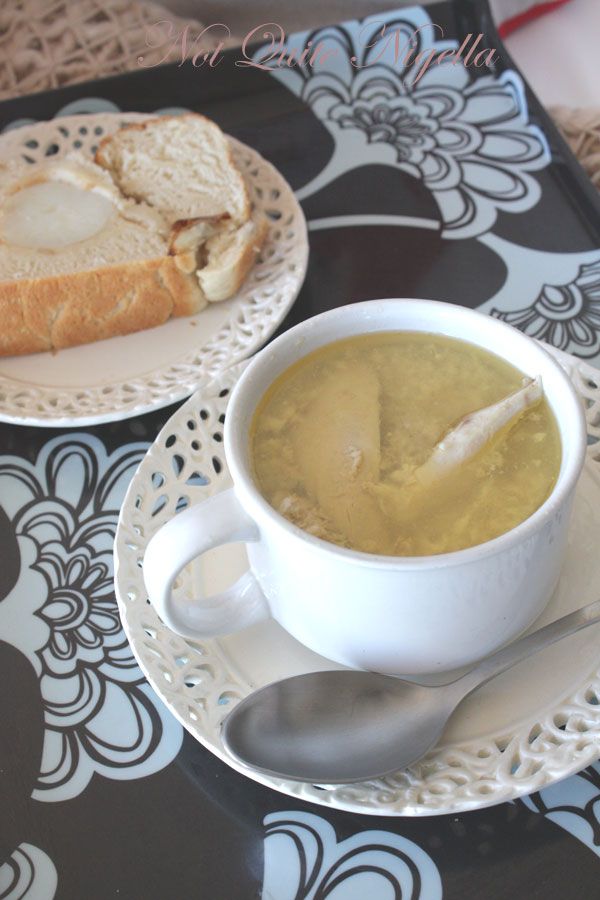 I like to celebrate my shut-in days by making the most of them. I watch the DVDs I've never gotten around to, read or at least start the books I've got gathering dust by the side of my bed and read trashy magazines ahem ... I mean keep up with current affairs.

This Tessa Kiros recipe for chicken soup is from her book Apples for Jam, a cookbook/storybook with some gorgeous pictures and home recipes with a comforting edge to them. It interested me as it looked great in the photos. Yes, I am that superficial. I also liked the idea of a thick chicken soup - there's nothing wrong with a thin broth but I like more sustaining soups, particularly if they are the main and only course at dinner. 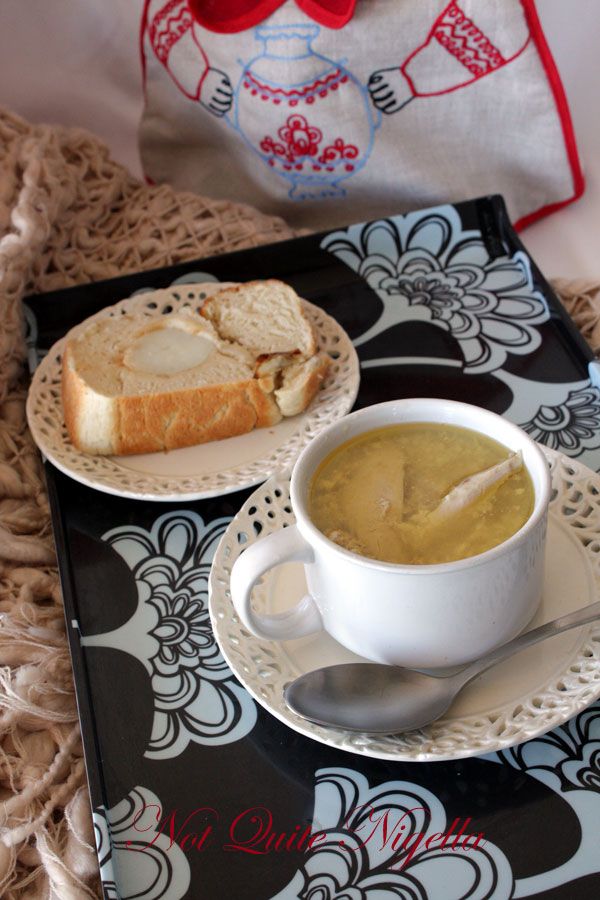 As for the Potato Bread, I admit I fiddled with Nigella's recipe. I actually got the idea from a friend Maria from Foodie Wanderings in which she told me about a bakery that made bread rolls with a whole boiled potato and mayonnaise inside. So I thought what bread recipe would better apply to this than Nigella's potato bread. Call it potato on potato. And if you're walking around in your Juicy trackpants, thermals and wooly socks, what better way to celebrate not having to wear your jeans than with an unashamed carb fest.

The soup was lovely on it's own but like all great partnerships, it becomes so much more moreish when partnered with the spongy yet crunchy crusted bread. And if you think that it's all too much of a production making the bread along with the soup, the smell of it baking in the oven should convince you otherwise. I'm pretty sure you could fit this in amongst your busy at home schedule. I managed to between appointments with Oprah and Entertainment Tonight. 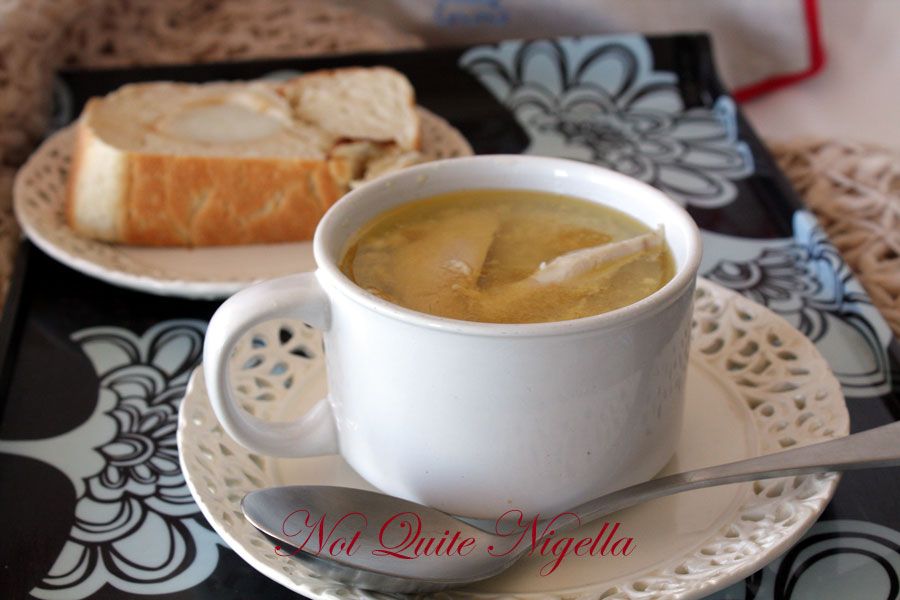 Step 1 - Put the chicken in a large pot with the celery, carrot, leek and peppercorns. Add about 3 litres of water and some salt and bring to the boil. If the water doesn't all fit into your pot, put as much as you can, and add the rest when it has reduced (I found it only reduced by about 250ml). Skim the surface with a spoon, lower the heat and simmer for 1.5 hours. Lift the chicken out onto a plate to cool and strain the broth into a clean pan. 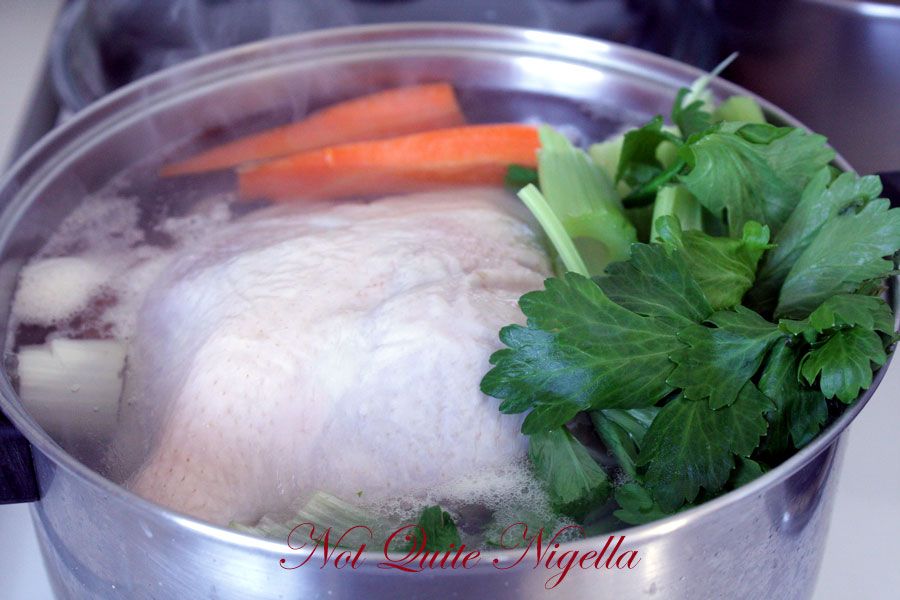 Step 2 - Pick all the chicken meat from the bones. Chop about 150g of the chicken meat into longish strips and put the rest into a blender. Chop until it is almost a puree and keep on one side for now.

Step 3 - Melt the butter in a smallish pan, then add the flour and stir with a wooden spoon for a few mknutes until it begins to turn golden. Add a ladleful of hot broth and mix in well and, when the flour has absorbed this, whisk in another ladleful of broth. Simmer for about 10 minutes, whisking every now and then so that it is very smooth. Add the Marsala and then pour it all back into the large broth pan together with all the chicken meat. Simmer for another 10 minutes.

Step 4 - Whop the egg in a small bowl. Add a ladleful f the hot broth to the egg, whisking to avoid is scrambling, and then mix this back into the broth. Return the pan to the lowest possible heat and stir with a wooden spoon for a minute or so to just cook the egg through.

From Apples from Jam by Tessa Kiros

Step 1 - Press the potatoes through a ricer into a large bowl - or just mash them once in it - and add 600g of the flour together with the salt and the yeast. Mix together, adding the yogurt and then the water slowly, (even if your potato water's salty, still add the salt to the flour earlier; on cooking, the potatoes themselves tend to neutralize salinity so you have to emphasise it - though not exaggerate it - at this stage). When you've got something approaching a dough, tip it out onto a floured surface (or keep it in the bowl and use the mixer's dough hook) and begin kneading, adding more flour sas you need it. I find I can end up using another 200g or so.

Step 2 - This is damper and stickier than ordinary white bread dough, so be prepared to keep kneading for a bit longer, but when you have something that looks like it's hanging together densely (I give it about 10 minutes in my KitchenAid with the dough hook fitted, then 2 minutes by hand), form a heavy ball - it won't be very neat - put it into a buttered bowl, turn to coat well, cover with clingfilm and leave in a cold place overnight or a warm place for an hour or so.

Step 3 - When the dough's doubled in size, punch it down, letting any repressed anger joyfully out, knead for a minute and form into a loaf of whatever shape pleases you, and preheat the oven to 220c/gas mark 7. Roll out into a rectangle shape the same length as the loaf tin. Place bread on the bottom and then place 3 cooked potatoes on the base right next to each other so that they are close together and sprinkle salt over them. 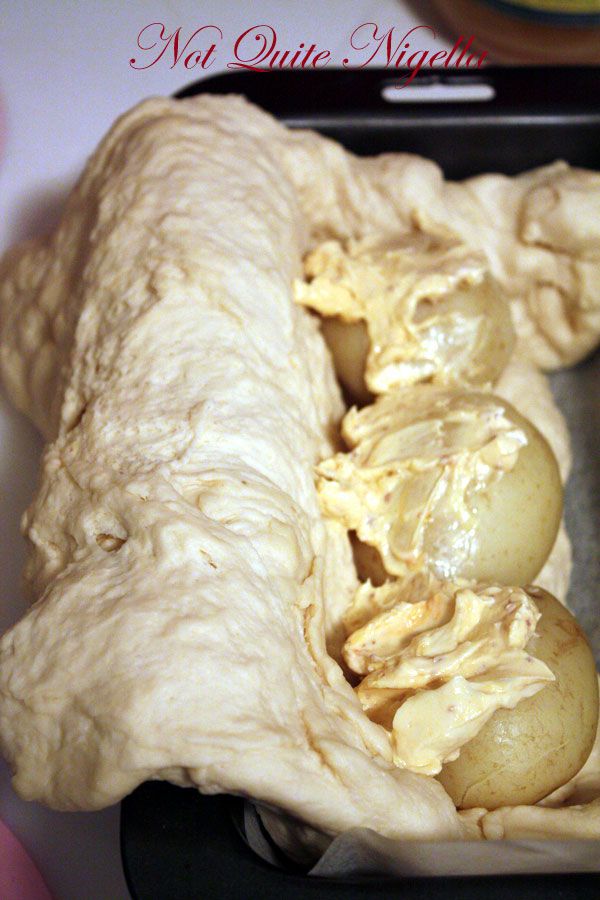 Step 4 - Then spread mayonnaise over potatoes. Fold over the remaining dough to form a loaf and then loosely cover with a tea towel and put in a warm place and after about 30 minutes, when the bread's puffy and almost doubled in size, put it in the oven for 20 minutes, before turning the temperatiure down to 190c/gas mark 5 and giving it another 10 minutes or until it's cooked through. Test, as usual, by knocking on the loaf's underside: when cooked, it should give a distinctly hollow sound. 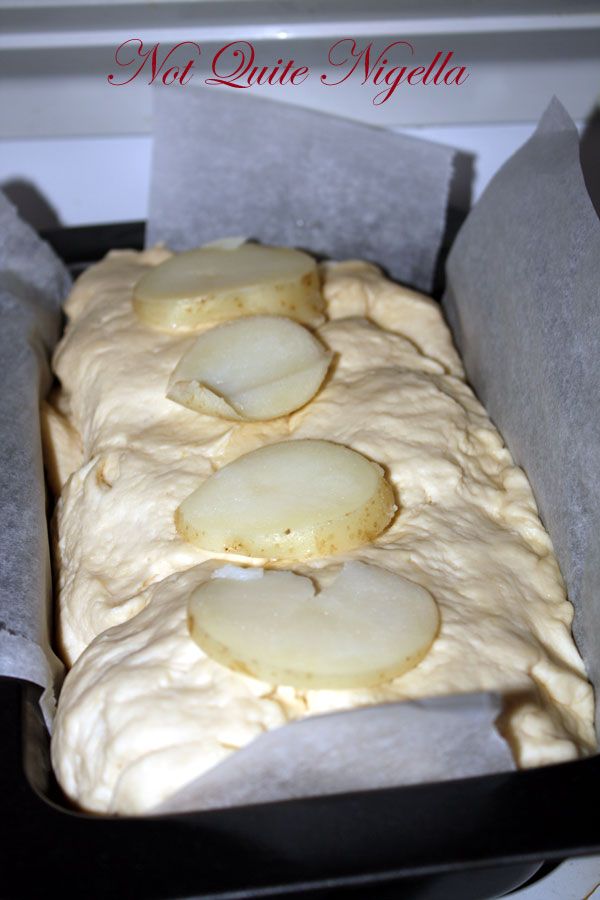 Adapted from How To Be A Domestic Goddess by Nigella Lawson 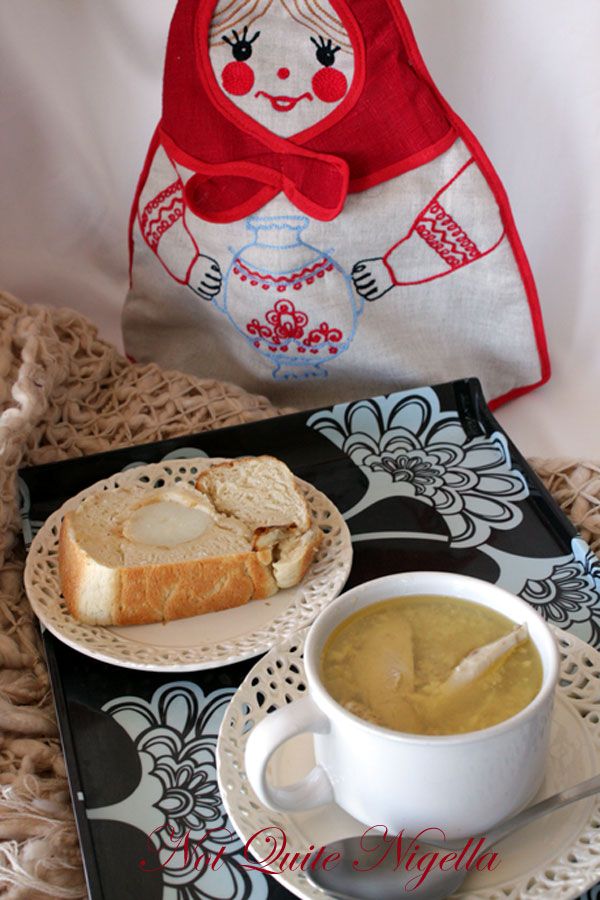 Thanks to Christie at Fig & Cherry for letting me know about Noble Pig's Potato Ho Down! :) How cute is the logo? :lol: