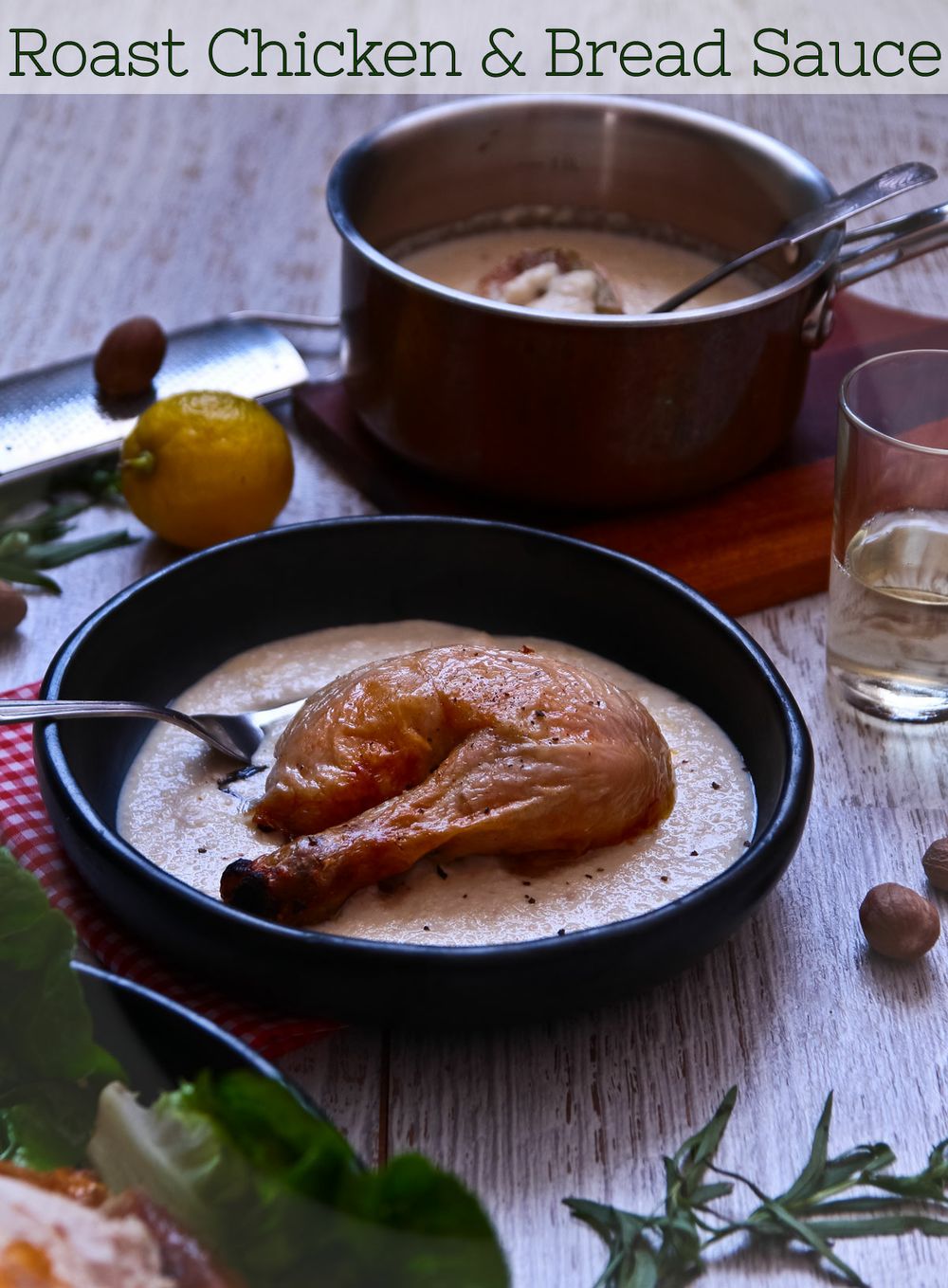 People sometimes ask me why I left advertising to pursue this blog. The truth was that at the time that I started the blog, I didn't have the most exciting client base. I had an extremely conservative health insurance company and a catalogue company. It wasn't always that way and I did have my share of interesting work. One client was an adult distributor of adult films, clothing and paraphernalia that was trying to break into the mainstream market. They wanted ads in B.R.W., women's glossies and on billboards as they were trying to appeal to females, couples and the middle of the road and they hired our very bemused mainstream ad agency to help them do that.

As I was in the media department, the magazines that made it our way were startling to say the least and our office became the go-to place for if you were bored. The guys from the production team would wander past and see how we were going which was amusing because they never visited us before. We would gladly hand over a plastic sealed magazine with bulldog clips on the cover where no office stationery featured (I'll leave that to your imagination) and they would slink away the head guy holding the magazine like a Pied Piper while everyone trailed behind him begging him for a look. We were glad to get rid of the magazine that had us simultaneously gasping with horror and amusement.

One day, as the adult company was based in Perth, they asked if any staff could help man their booth at Sexpo, the annual sex expo. My friend Teena, who worked at another agency was intrigued as I was and wanting of a day out of the office, so we both went along. 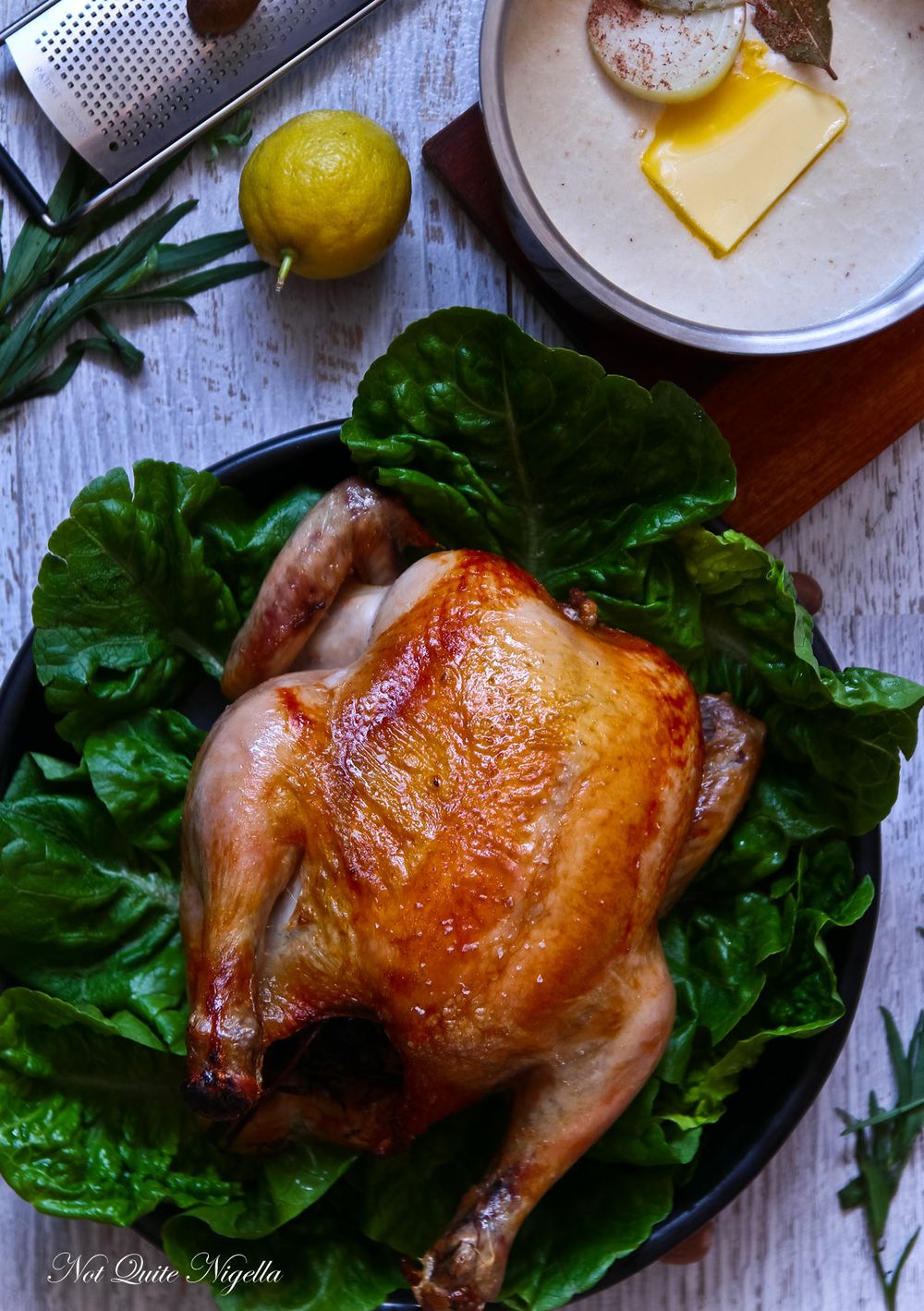 The promise to train us in the intricacies of selling these items disappeared and they were preoccupied with other things so Teena and I had no idea what we were doing. But as it was a shop, people kept coming and wanting to buy things from us. There were all sorts of odd items - there was a more updated version of a blow up doll which just looked like the pelvic region of a woman without legs, head or torso. I was slightly disturbed by the fact that it looked like what a serial killer might do and when I touched the "realistic feeling flesh" it felt like I was touching the slow cooked jellied fat of pork belly.

Towards the end of our shift, I remember one couple asking me for my advice on something with a butterfly on it. I had no idea so I simply pointed to the most expensive one and said that that was the safest bet. He was skinny, pale and had a rat's tail and a flannelette t shirt and she was the female version. They were nice enough, and quite embarrassed and either in love or lust. She turned to him and said affectionately "he's so funny and sexy, he looks like a chicken when he's naked." I looked at them and thought that that would have to be the oddest compliment I had ever heard and from their expressions, it was certainly meant in a complimentary fashion. I summarised the proceedings and decided that I was perhaps living in an alternate universe. Teena and I left soon after when our shift had ended.

And it just fits that every time I see a raw chicken, I think of that couple and that guy. I hope their purchase lasted as long as their relationship. 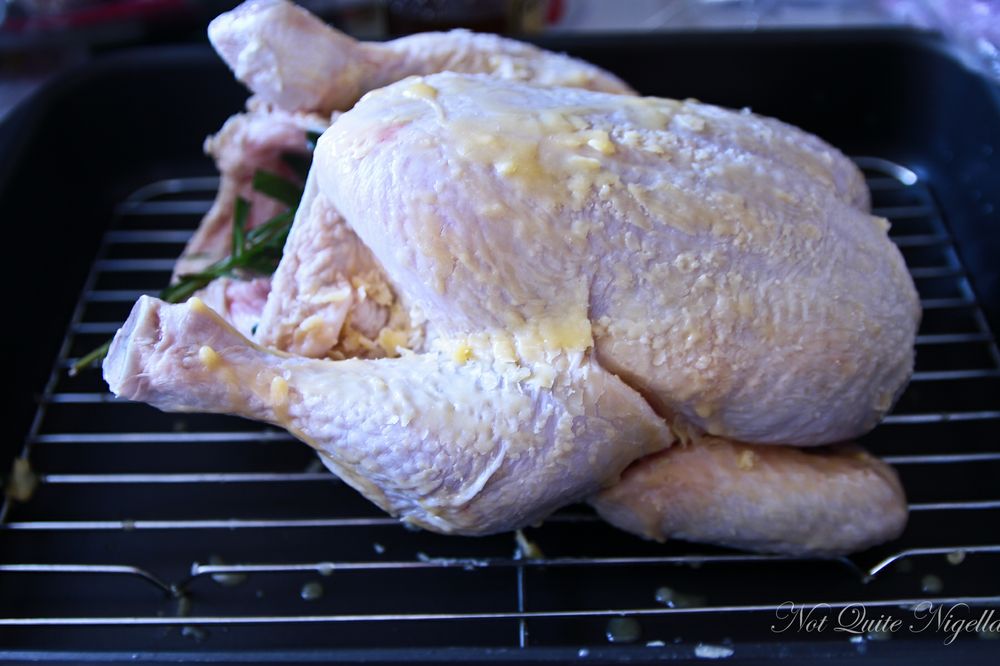 And then I thought of that naked guy...

This is a last gasp winter dish. I say last gasp as I want to hurry winter along and scoot its chilly bottom out of here. I'm ready for sunshine and warmth. This roast chicken uses Heston Blumenthal's method. I will warn that like his perfect steak, it requires the removal of smoke alarm batteries as the last step does tend to produce a lot of smoke. However, prior to this, it is a gentle way of roasting a chicken preceded by the moisture infusing step of brining a chicken in salted water. The result is a wonderfully tender, juicy chicken with a lightly crispy skin. The bread sauce is a mild, comforting sauce, not unlike a creamy bechamel and you could also add roasted chestnuts to it if you wanted a sweet, nutty addition. Even though the last step browns the chicken at the risk of the smoke alarm going off, I am aware that it is crucial, not only for visual appeal, but also to put out the image of that guy from my mind ;)

So tell me Dear Reader, are you ready for a change in seasons? Have you ever had a strange job? And if you have a blog, what prompted you to start it?

Step 1 - Prepare the brine by dissolving the salt in the water. Remove fat from chicken and place the chicken and the brine in a large container that can fit both. Cover and refrigerate overnight.

Step 3 - Preheat oven to 90ºC /194F/ gas mark ¼ (yes, really that low). Roll the lemon on the counter to help release the juice and then prick at it with a sharp knife and insert the lemon and tarragon into the cavity of the chicken. Using the melted butter, brush this on top of the chicken and on the sides. Bake for 3-4 hours until a thermometer inserted into the thickest part of the breast reads at least 60C/140F. 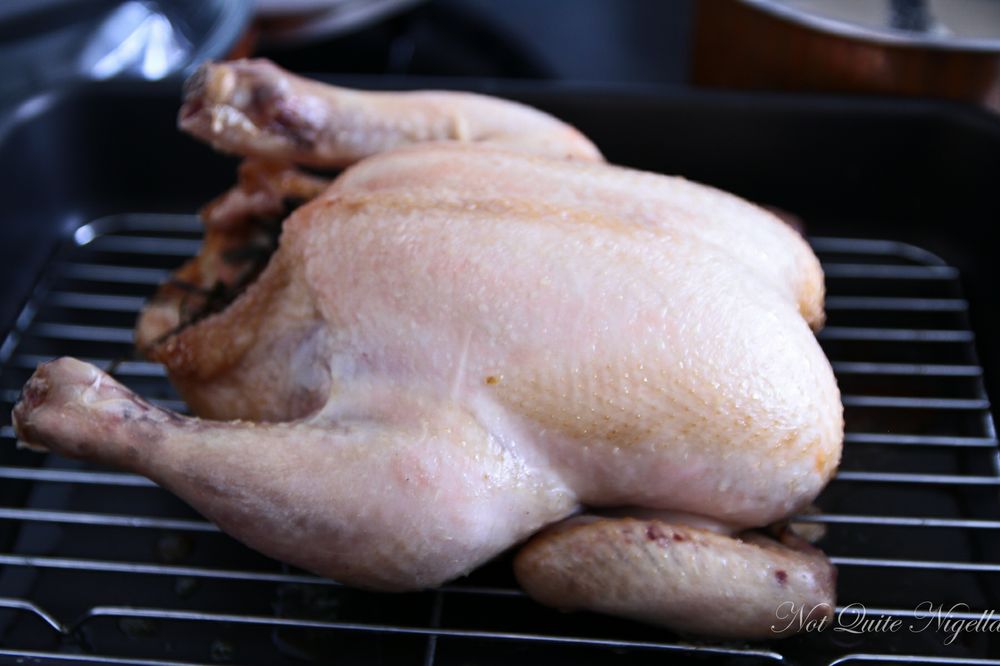 The chicken after 4 hours in the oven on 90C. It's that same guy with a slight tan... 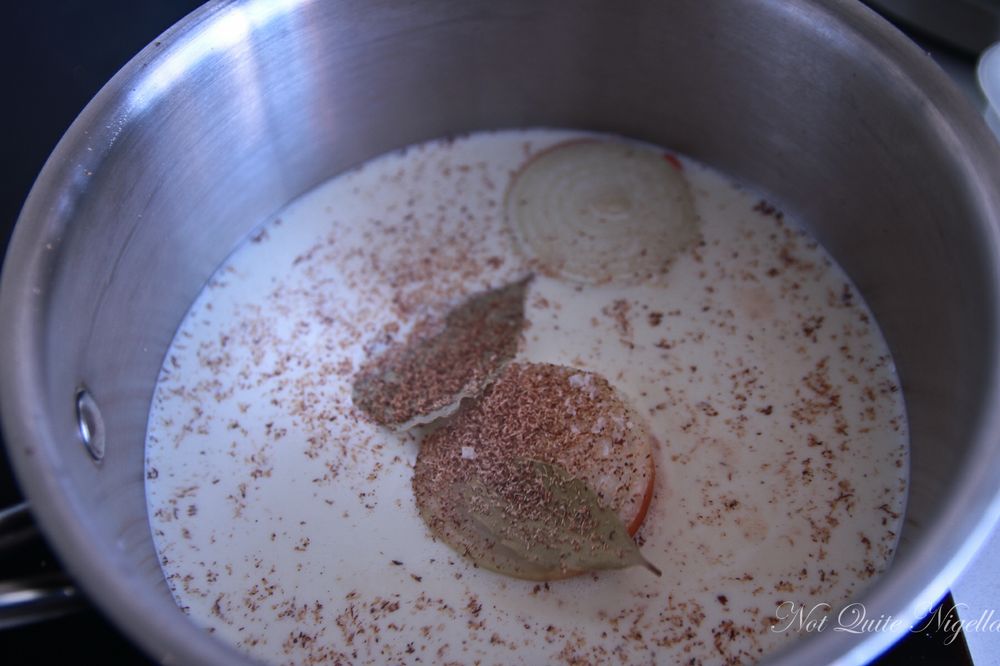 Step 4 - Meanwhile, make the bread sauce. Whiz the breadcrumbs in a food processor until you get breadcrumbs. Place the milk in a saucepan along with the onion halves, peppercorns, nutmeg and bay leaf and heat until simmering. Add the breadcrumbs, stirring while it thickens and swells up, about 15 minutes. Add salt and pepper for taste. For a smoother bread sauce which I prefer (it tastes just like bechamel sauce), blend the bread sauce until smooth and serve hot with some butter to finish it. 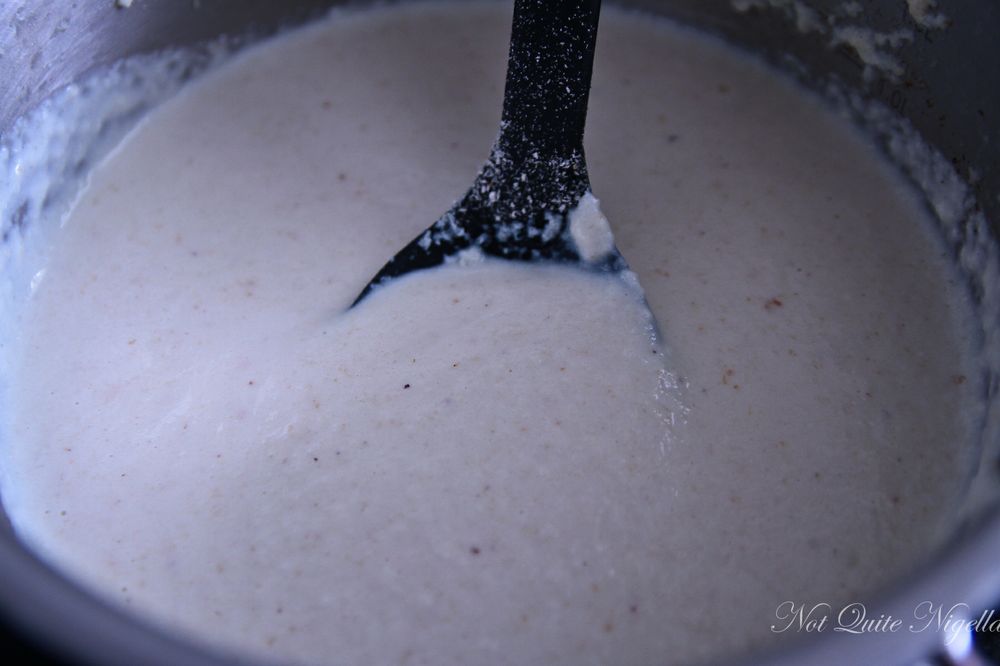 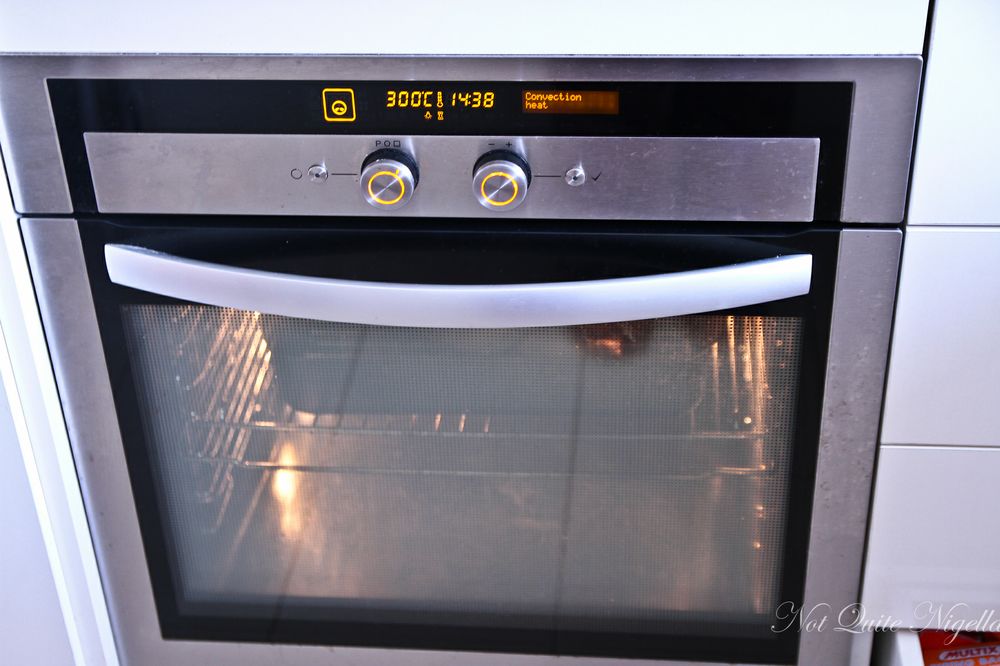 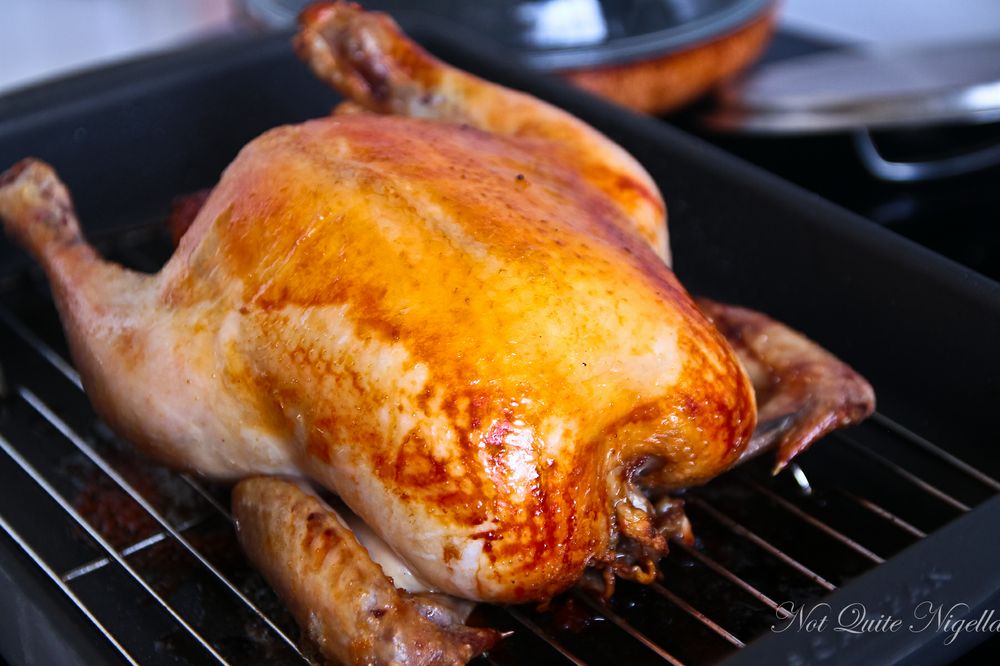 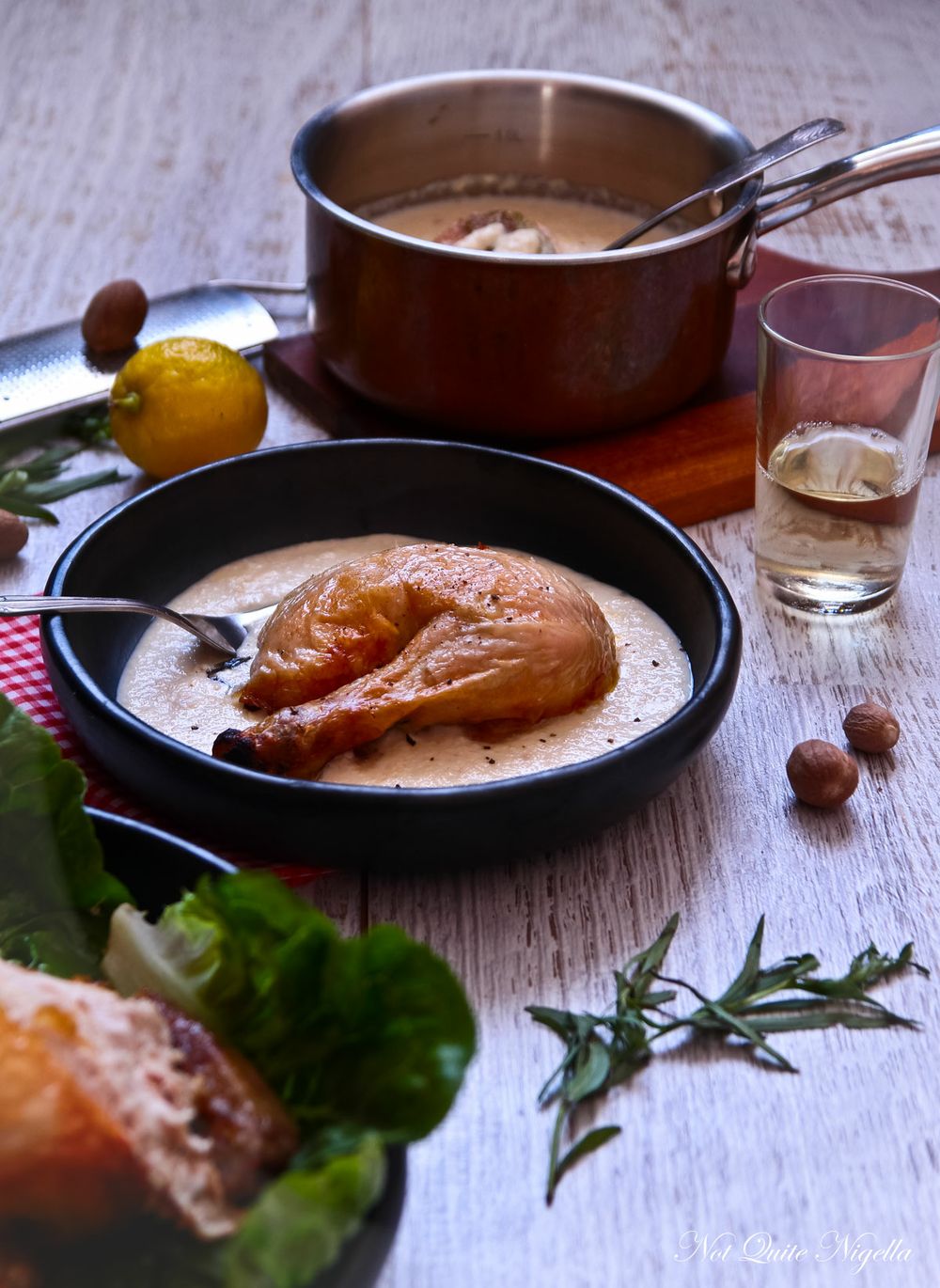