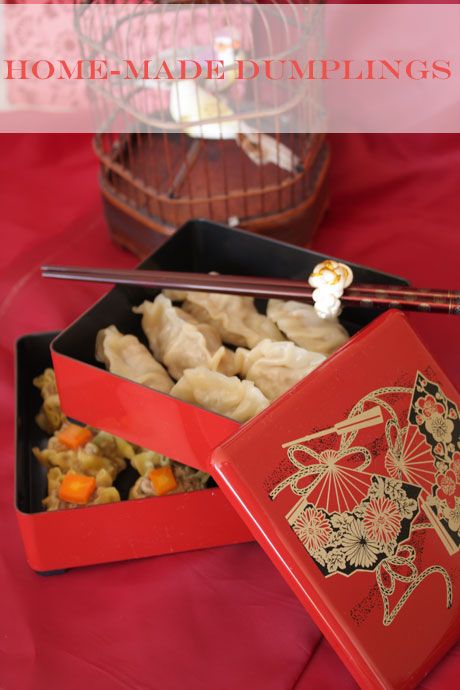 I'll caution you that I was going to do Olympic cupcakes. But that time it rolled around, the last thing I felt like doing was fashioning Olympic rings in the various colours out of chocolate. Let the athletes train for it, I'll just stay on the lounge and watch. So these are my little shout out to the Olympics.

My mum rarely gives out recipes. For some mums, revealing their best recipe is akin to a magician revealing how they have done their tricks. They prefer to keep these close to the chest and leave a bit of mystery. It's not restricted just to mums and I've seen it in people my age too. Not that I blame them, they've probably been asked to keep the valuable family recipes a secret, a physical or mental "vault" if you will. 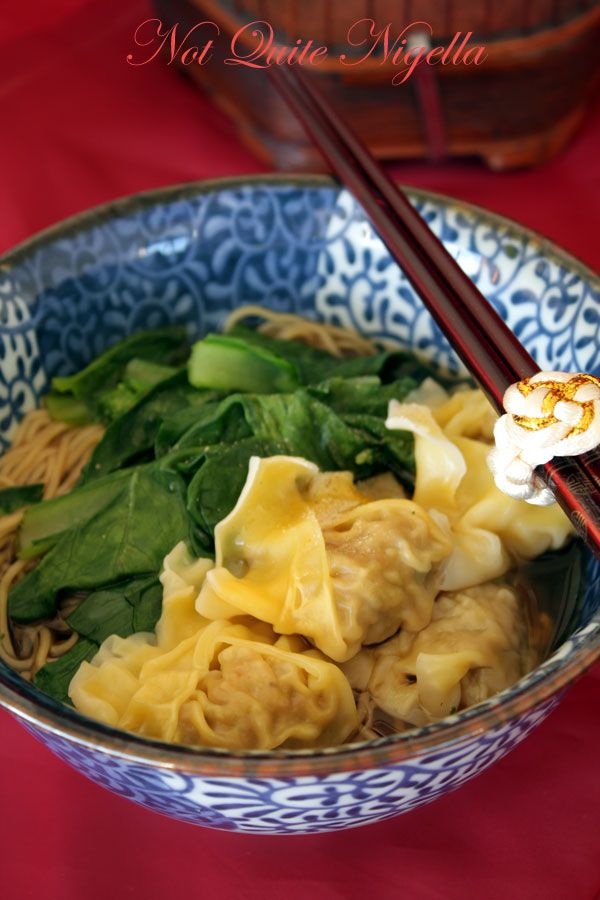 It seems that everyone is dumpling mad lately and sometimes you just want to whip up a batch of soup with some greens and dumplings without having to leave the house. And at night temperatures in Sydney reaching -1 degrees (aren't we supposed to be the sunburnt country?) the thought of going out some nights just pushes me towards the heater and the snug quilt. So for these nights, my mum has open up her recipe treasure trove and revealed her famous Wonton recipe (ok famous among her friends and family) which can also be adapted to make Siu Mai. These are excellent to freeze (use greaseproof paper between single layers) and popped into boiling water to cook. 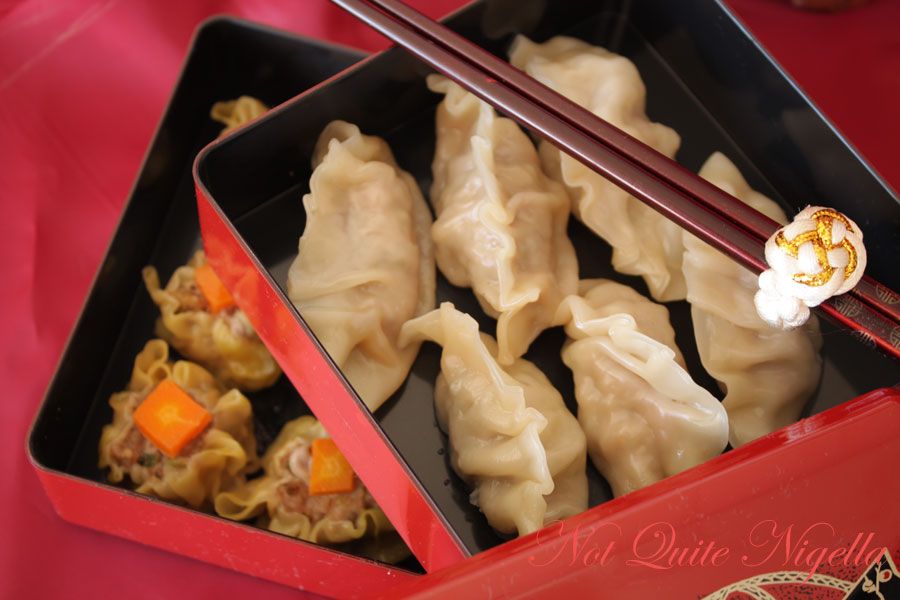 The easiest part of this of course is making the filling. I buy the prawns shelled but whole so I blitz the prawns, rehydrated shiitake mushrooms and spring onions in the food processor to make a fine mince. After making the filling, that's where the fun begins. You may want to enlist others into this part as it can take up to an hour to make the wontons or siu mai. The biggest mistake in the past I've found was overfilling the dumplings. Please resist all urge to overfill them, especially when you're halfway through and realise that you've still got loads to make (making a giant one when you're well and truly over it isn't a great idea). 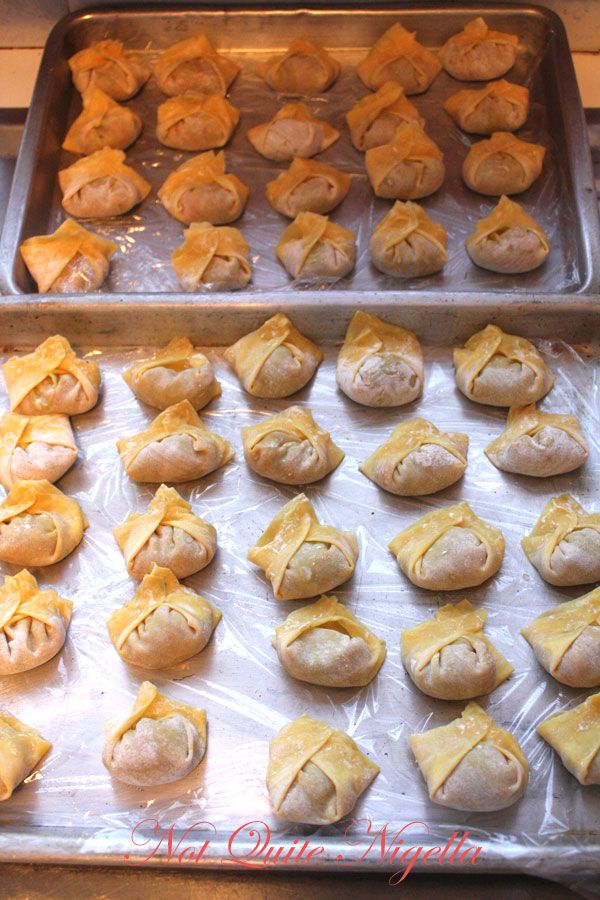 How many this makes exactly depends on the kind of dumplings you make. The plain soup dumpligns require less filling but the Siu Mai and Gow Gees require more. Also make sure the ingredients are minced well, the finer the mincing, the less likely that the skins will burst from "sharp" or large bits. And either cook them once they're made or freeze them, if you pop these in the fridge as is, they skin will become moist and stick to the bottom and split when you try and prise them off. The only thing I can think to counter this is to flour the bottom of the tray that they sit on although I haven't tried this. 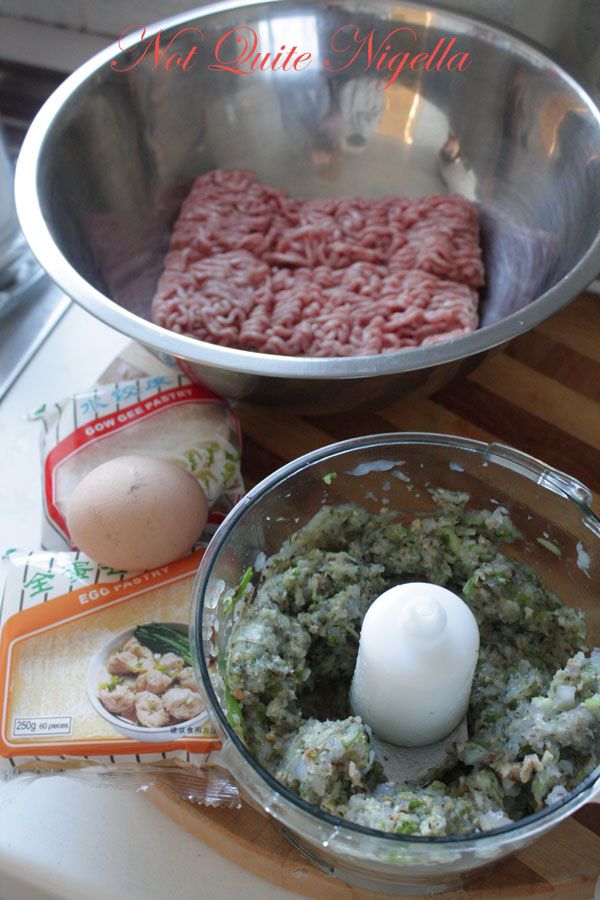 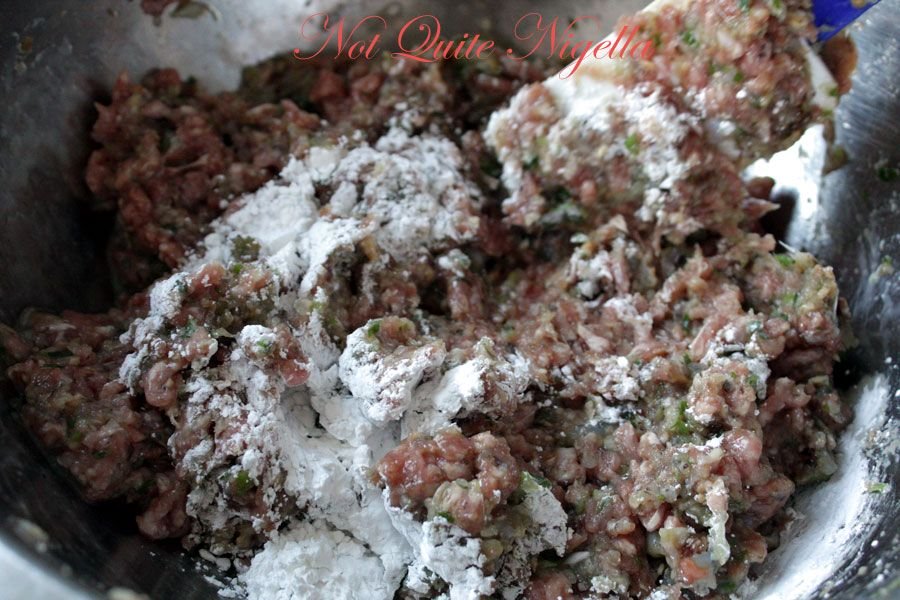 Step 2 - Then add in minced prawn, spring onion, mushroom. egg, sesame oil, some pepper and cornflour. Mix thoroughly until the mixture is sticky.

Step 4 - Fill a pot with water and bring to the boil. Add wontons, not too many at a time, and cook until they float to the top. Serve with chicken broth with greens. Or for Siu Mai, place greaseproof paper at the bottom of a bamboo steamer and steam over a pot of boiling water. 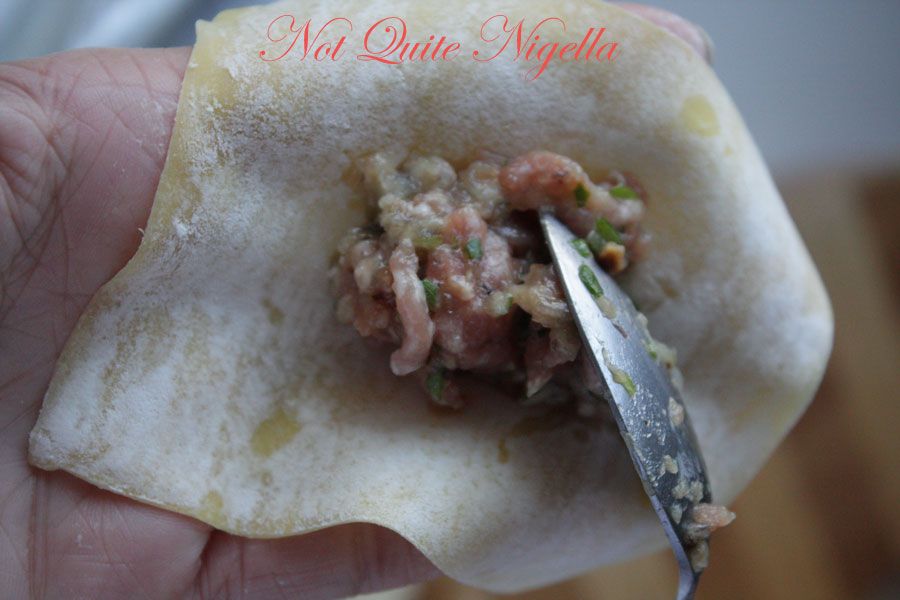 Add small amount of wonton filling in centre of the pastry 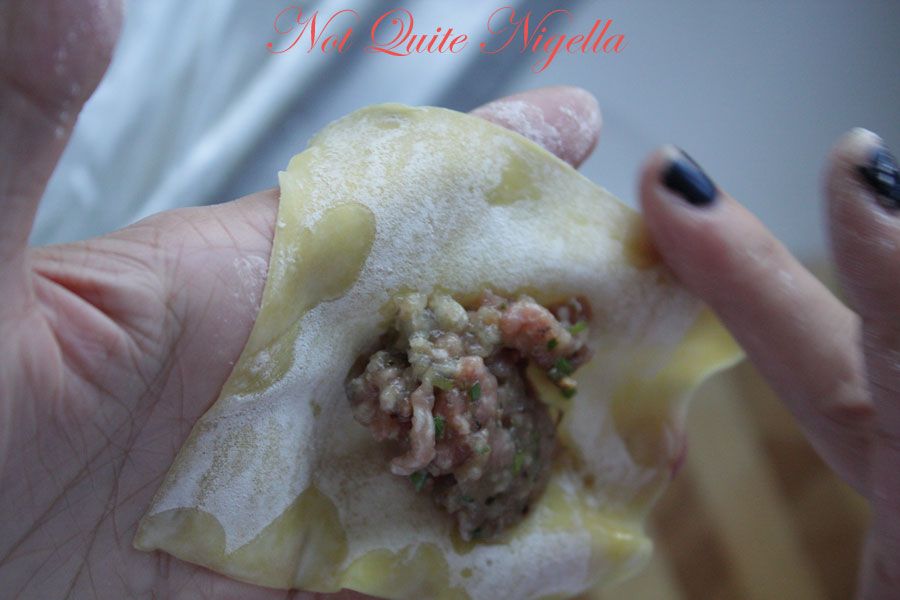 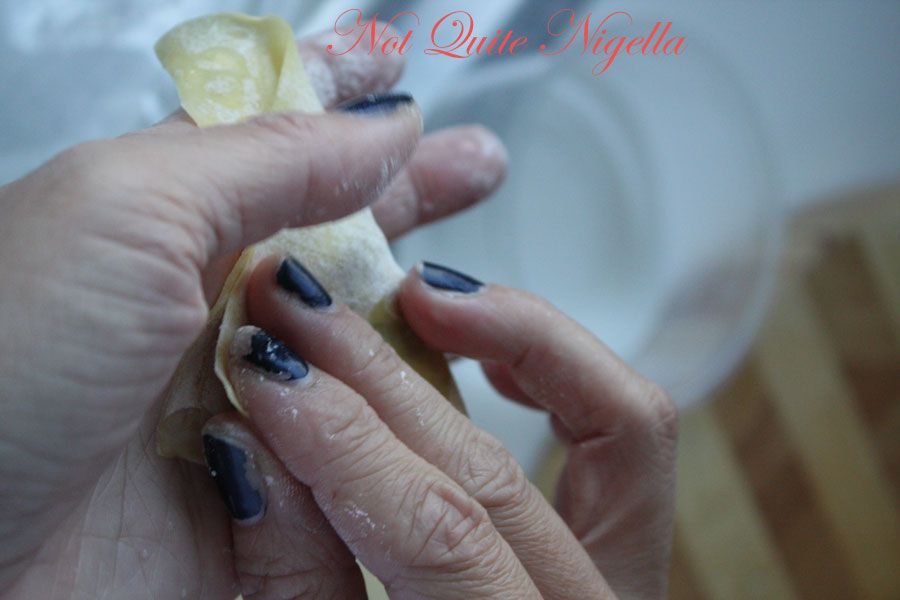 Fold over to make a triangle 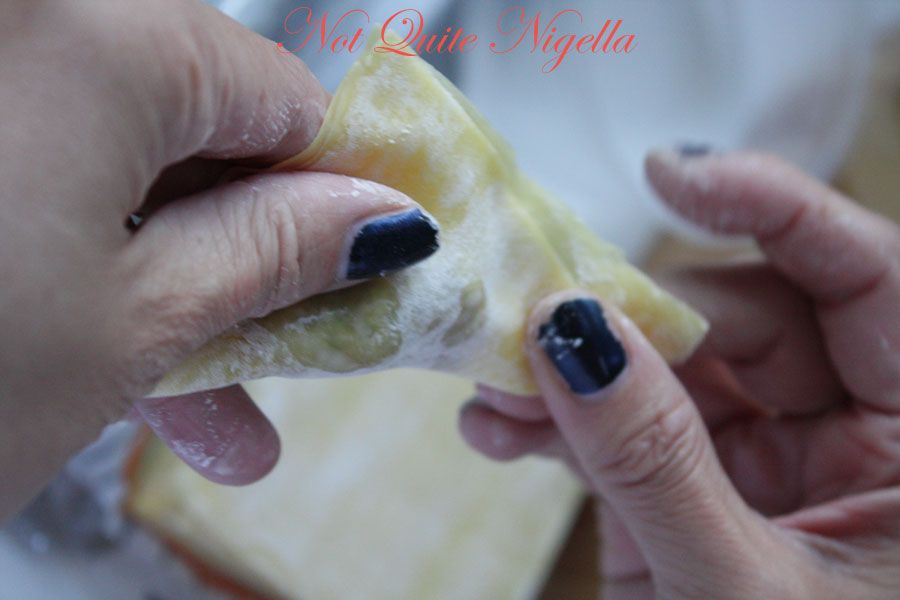 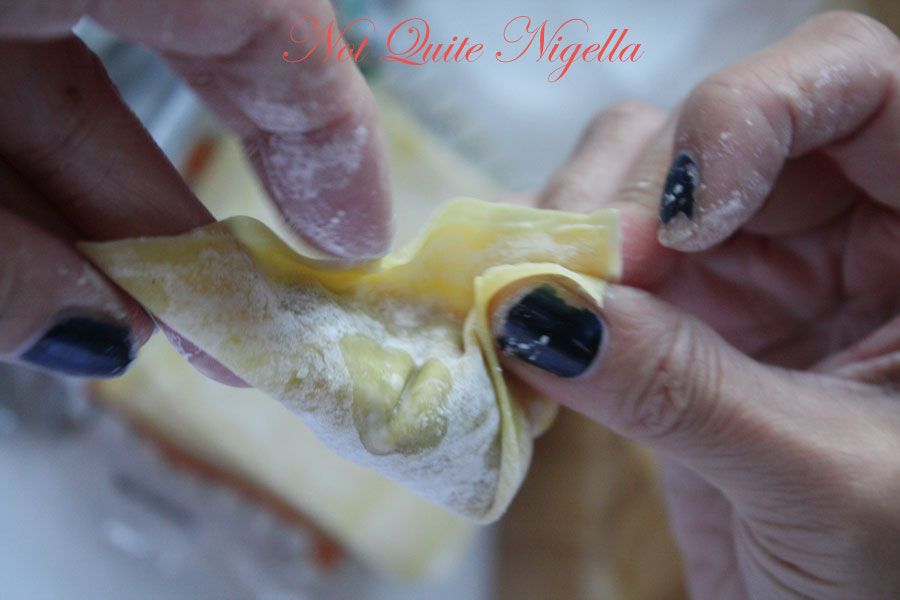 Grab the right hand corner and bring it to the centre corner, do the same for the left 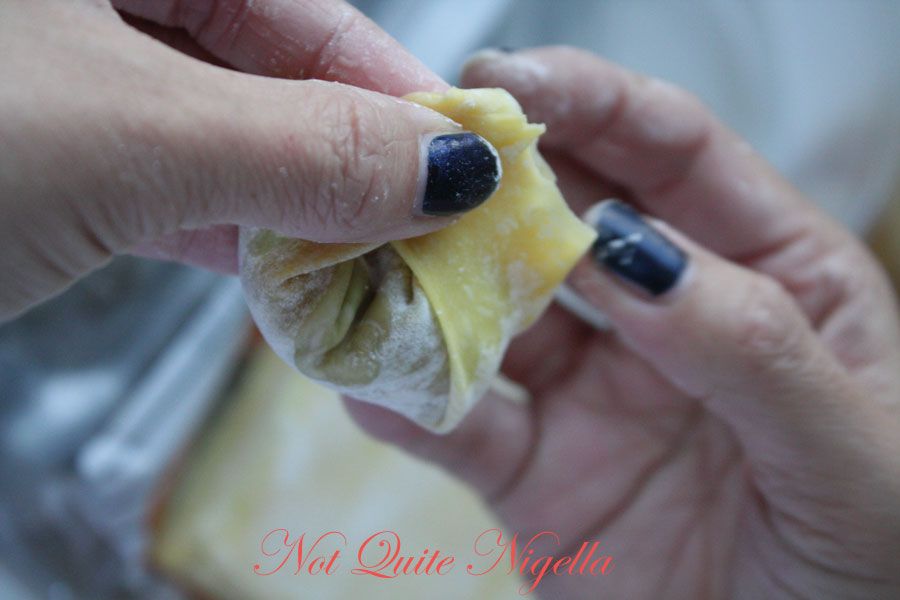 Press both corners firmly but gently 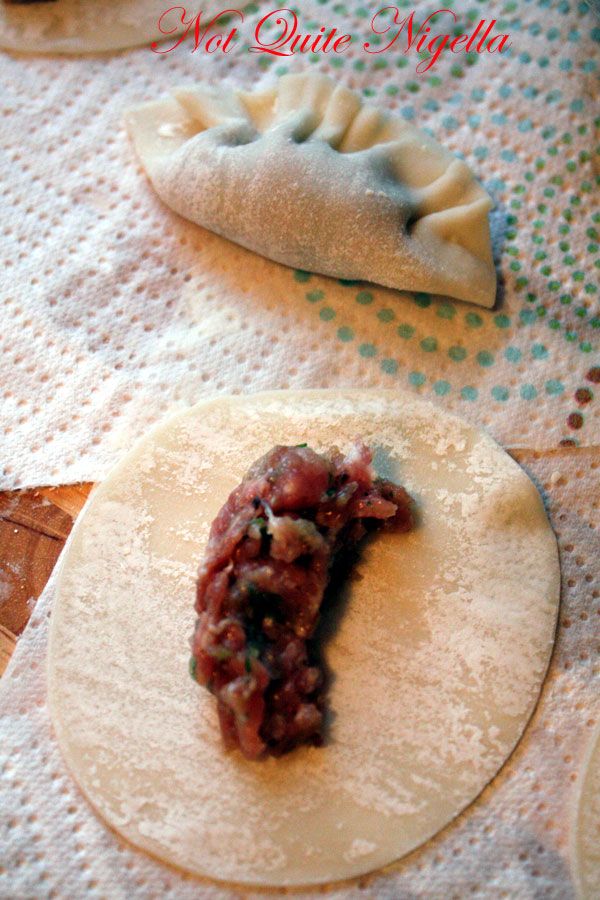 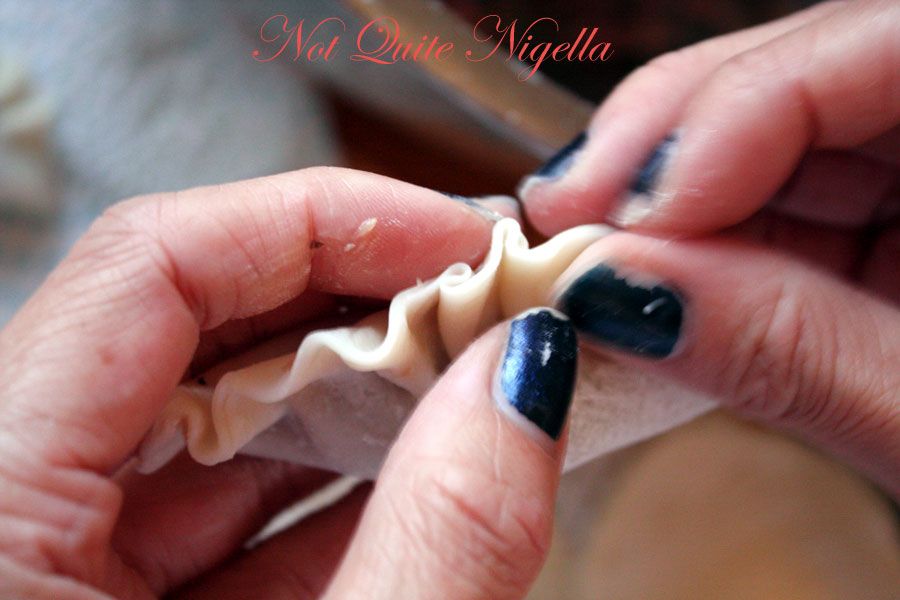 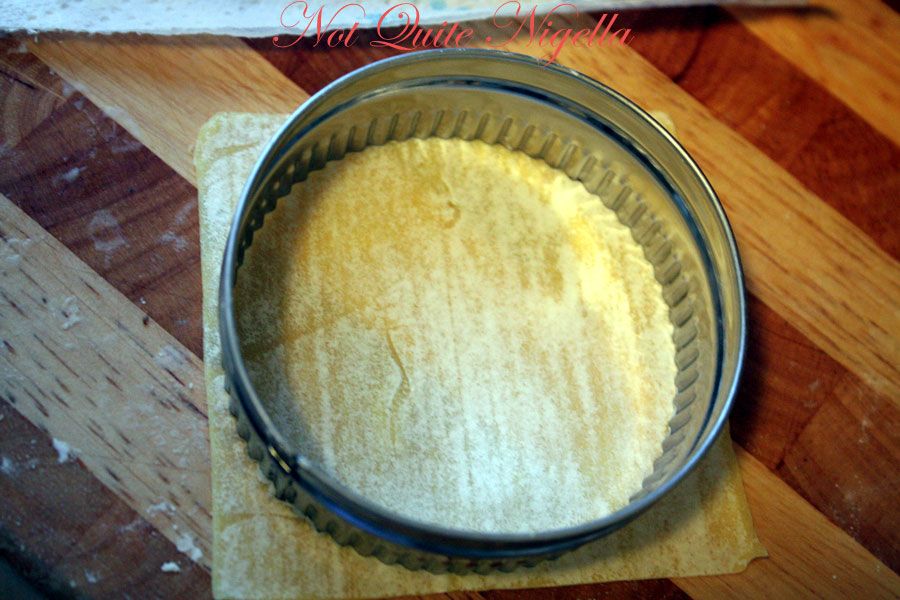 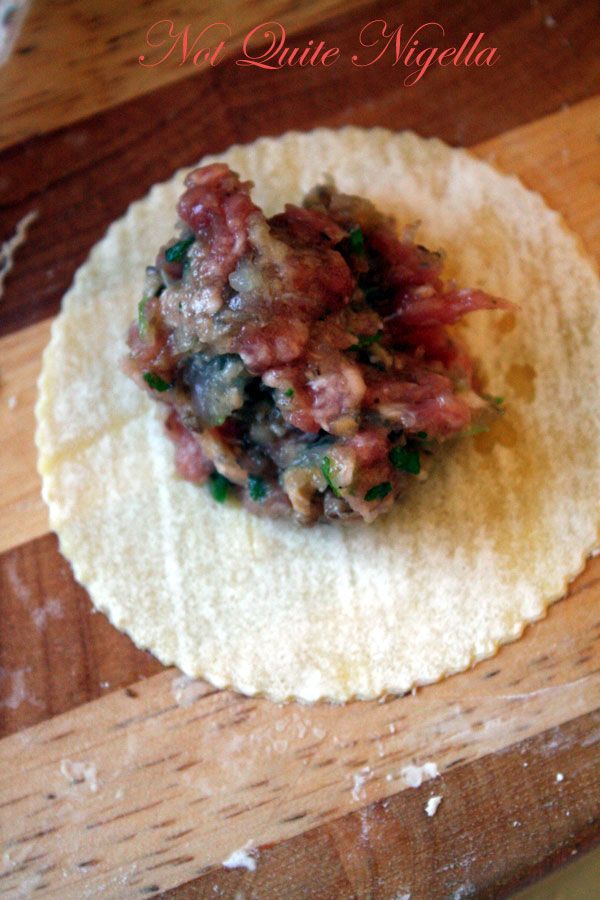 Add filling in centre (more than with gow gees or wontons) 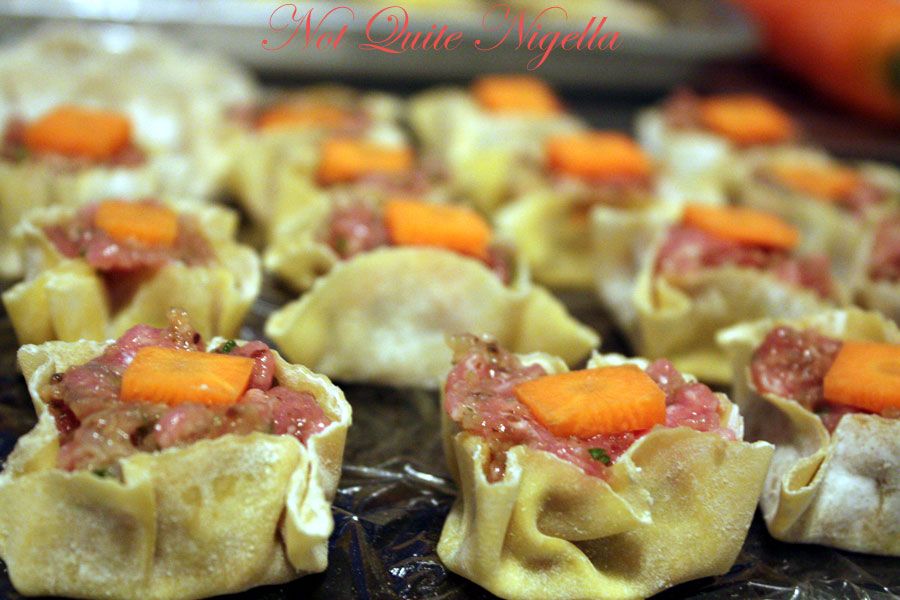 Add carrot on top (purely optional, for decoration but more appropriate than cupcake sprinkles in this case!)