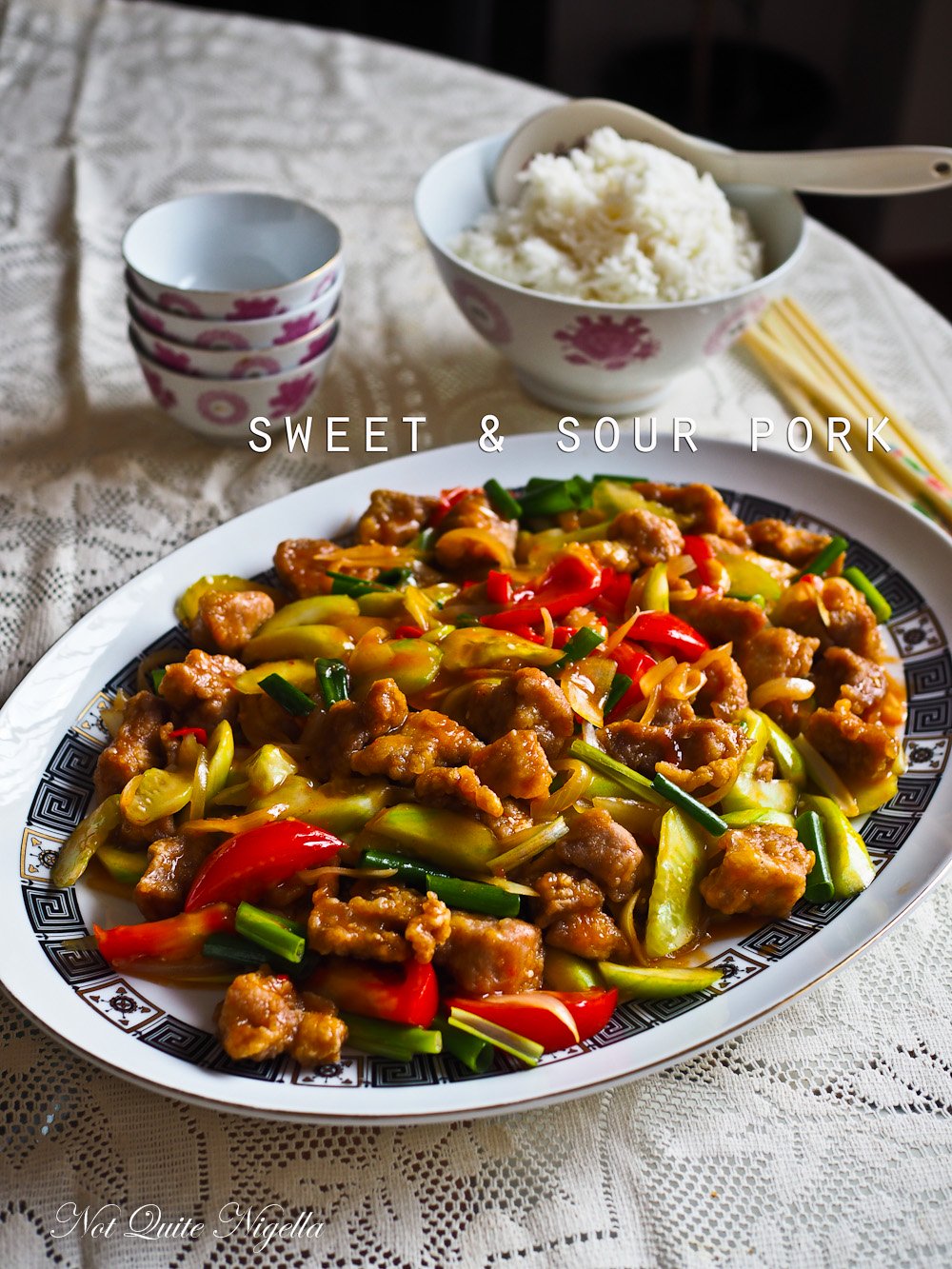 The restaurant classic sweet and sour sauce is a popular yet much maligned dish. It is seemingly over-represented in suburban Chinese restaurants yet there is something really delicious about the sweet and sour combination. When we were small my mother used to occasionally cook her version. Hers didn't use any pineapple, like so many do (although you certainly could add it if you want). The meat was soft and tender and the sauce danced on that tightrope of both sweet and sour. 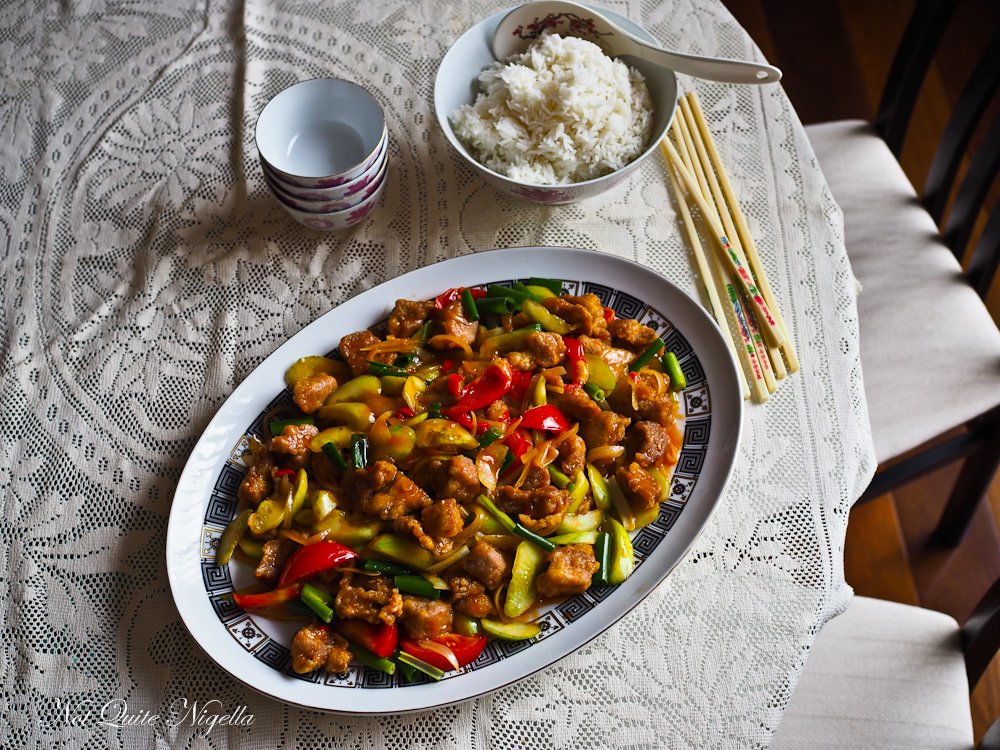 My mother's sweet and sour pork uses tomato and cucumbers which is something that she didn't always use. They'd only pop up separately or in conjunction very rarely (my family aren't huge tomato fans I am the exception) and cucumbers would be more popular. Before you close down this window at the idea of cooked cucumber in sweet and sour pork, please allow me to make my case for it. I too was unsure about it, my memory being so distant of it, but once I tried it in this, it fit perfectly. They're not cooked for very long so they take on the texture of say a cucumber pickle. Or feel free to leave them out completely but I personally think that would be missing out on a delightful part of the dish.

She marinated the pork - and she chooses pork neck because it is just the right amount of lean and fat, in a tenderising mix and then once this is done, it's deep fried and then the sauce is made. It is very easy to do and is comfortingly delicious. 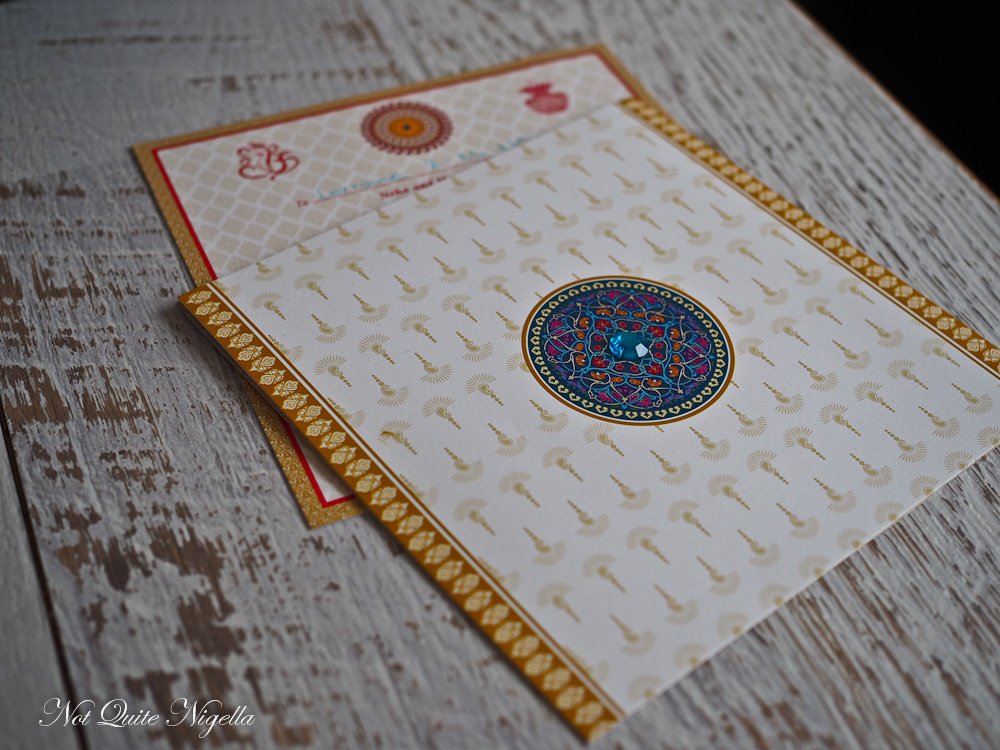 When I made this sweet and sour pork it was a pretty cross cultural day with two cultures that have a lot in common. I had spent the morning having a fitting for a sari. I don't know if you remember this blog post from a while back but once upon a time, a young man called Karnik asked for a blog post of mine as he was proposing to his girlfriend. He told me that she really enjoyed reading the blog and he was putting together a custom made newspaper for her with all of her favourite things. I was only too delighted to help and sent him through a blog post that wasn't going to go live-that way he would have an exclusive. 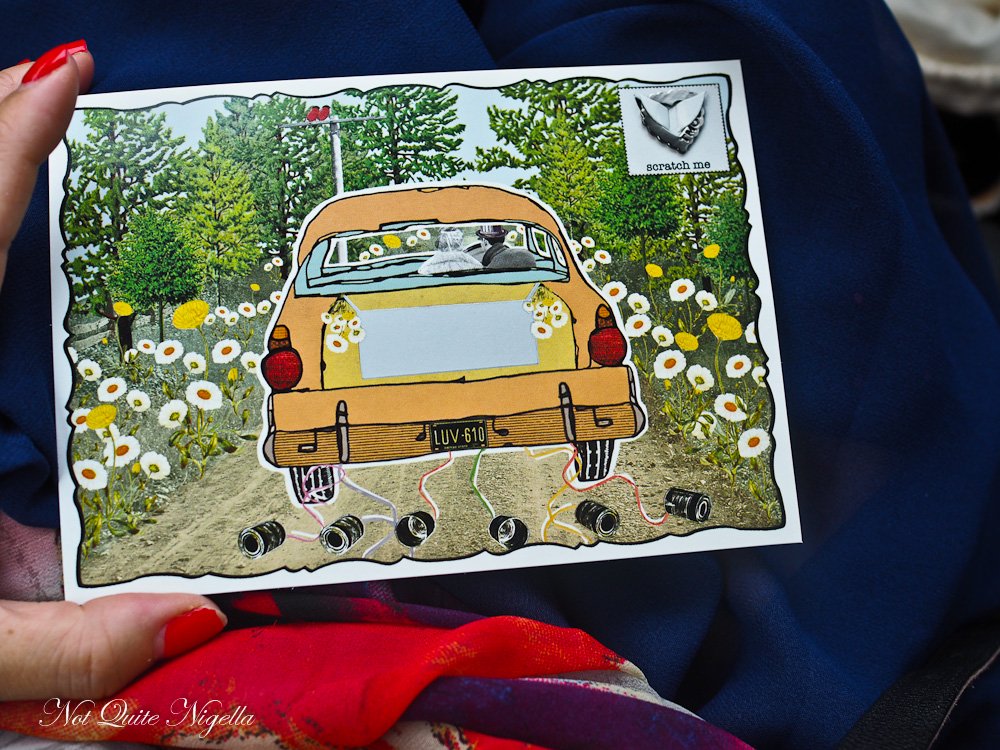 I wished him the best and sent them both good wishes and it was a few months later that I received an email from a girl called Mimansa. I didn't recognise the name because Karnik hadn't told me his girlfriend's name but with the lovely email she sent a photo of the newspaper. She accepted his proposal and thanked me sweetly for my article. A short time later a copy of the newspaper arrived in my post box along with a hand written note and then a beautiful invitation to their wedding! 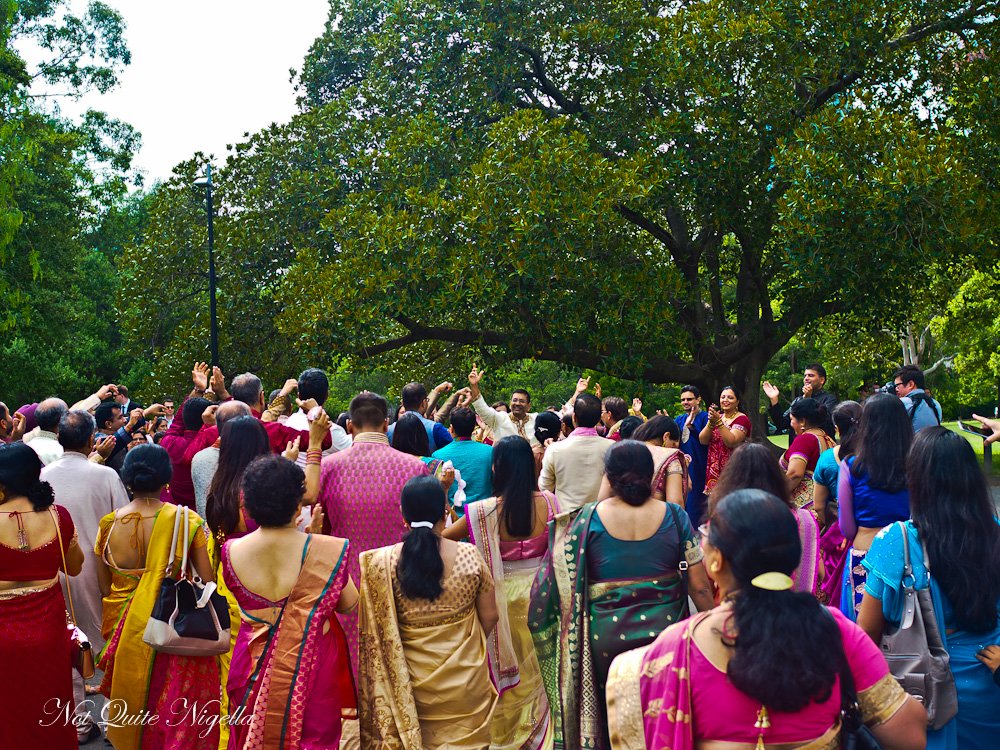 It took me all of two seconds to say yes and tell Mr NQN that we were going to a Hindu wedding! The invitation indicated that the dress code was formal (Western, Indian or any other culture). But I didn't have a sari. Mr NQN and I were walking off some pizza on the South end of King Street in Newtown a month or so before the wedding. We almost reached the end of King Street when we came across an Indian fashion store. 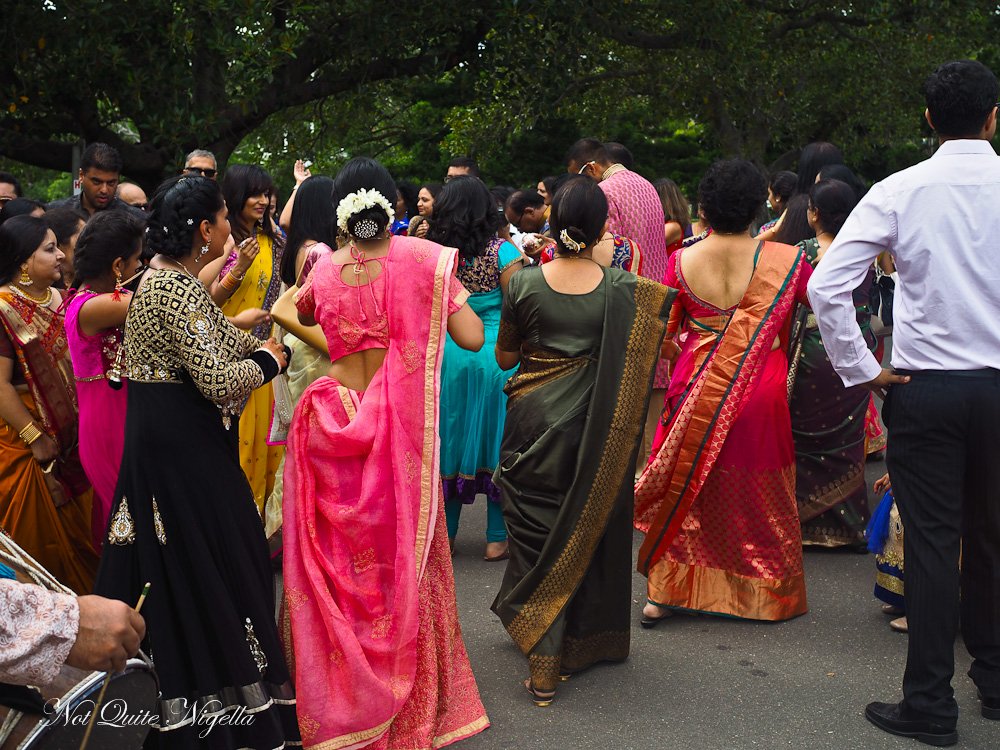 We walked in and there were bejewelled and gold threaded saris everywhere for hire and for sale. And so one day before the wedding I found myself getting fitted for a sari. The store owner Sam liked some colours on me but I really wanted to try the one that first caught my eye, a red and blue one. I loved the way that it fell on the mannequin. And it would be mine for the day. Sam helped me make sure that I could tie it easily myself the next day and a woman stopped me in the street on the way to the wedding to compliment me on my draping skills! All Sam's skills of course :) 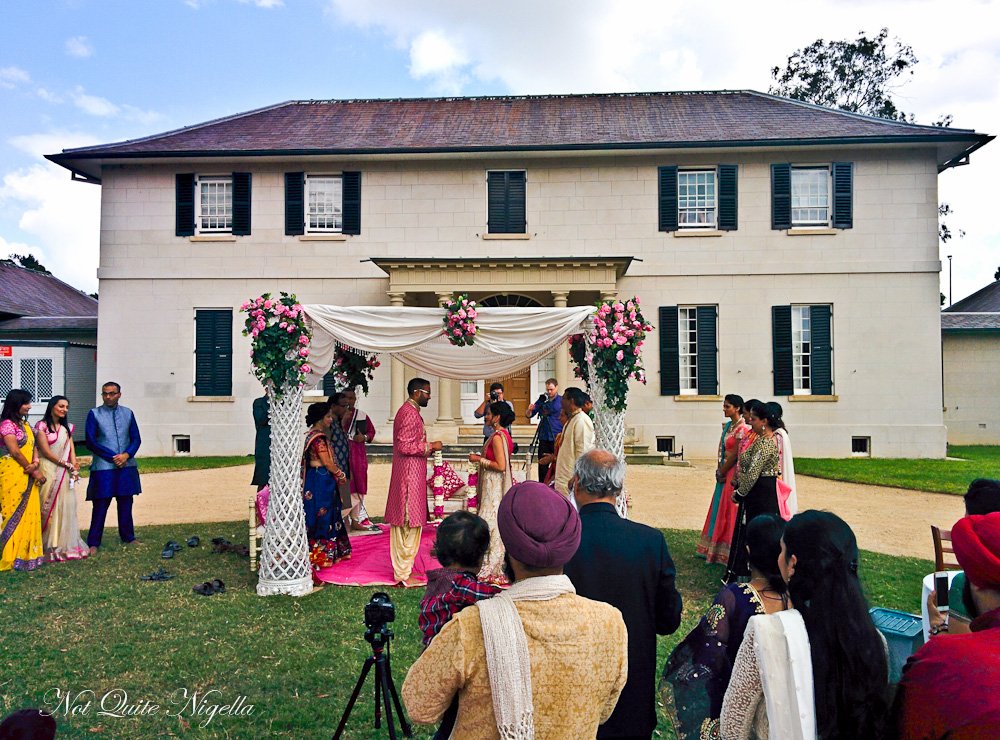 The next morning, at Old Government House in Parramatta, we could see the wedding celebrations had begun already. There were brightly coloured, glittering saris with embroidered sherwani jackets and churidar pants for men. Poor Mr NQN regretted his Western suit choice immediately. There was clapping and dancing around the groom Karnik and people moved towards the stage area. Some took seats in front of the stage while others shaded themselves under trees availing themselves of refreshments. What surprised us was the social aspect of the wedding. At Western weddings, people sit down on particular sides (bride or groom side) whereas it's more freeform here. We had asked Mr NQN's colleague Sachin about etiquette as we wanted to be careful to not offend.

His tips were to avoid wearing black and white and to not over think things. It's relaxing and not a stuffy ceremony at all. People get up and wander off to get refreshments and chat on the side as the ceremony takes place. Kids aren't obliged to sit still and be quiet, should they start to fidget someone carries them off to play in the grass. Mimansa and Karnik exchange vows as well as take seven circles around the fire pit to represent the Saptapadior the Sath Phere which are the seven promises or seven steps that each couple makes to each other. 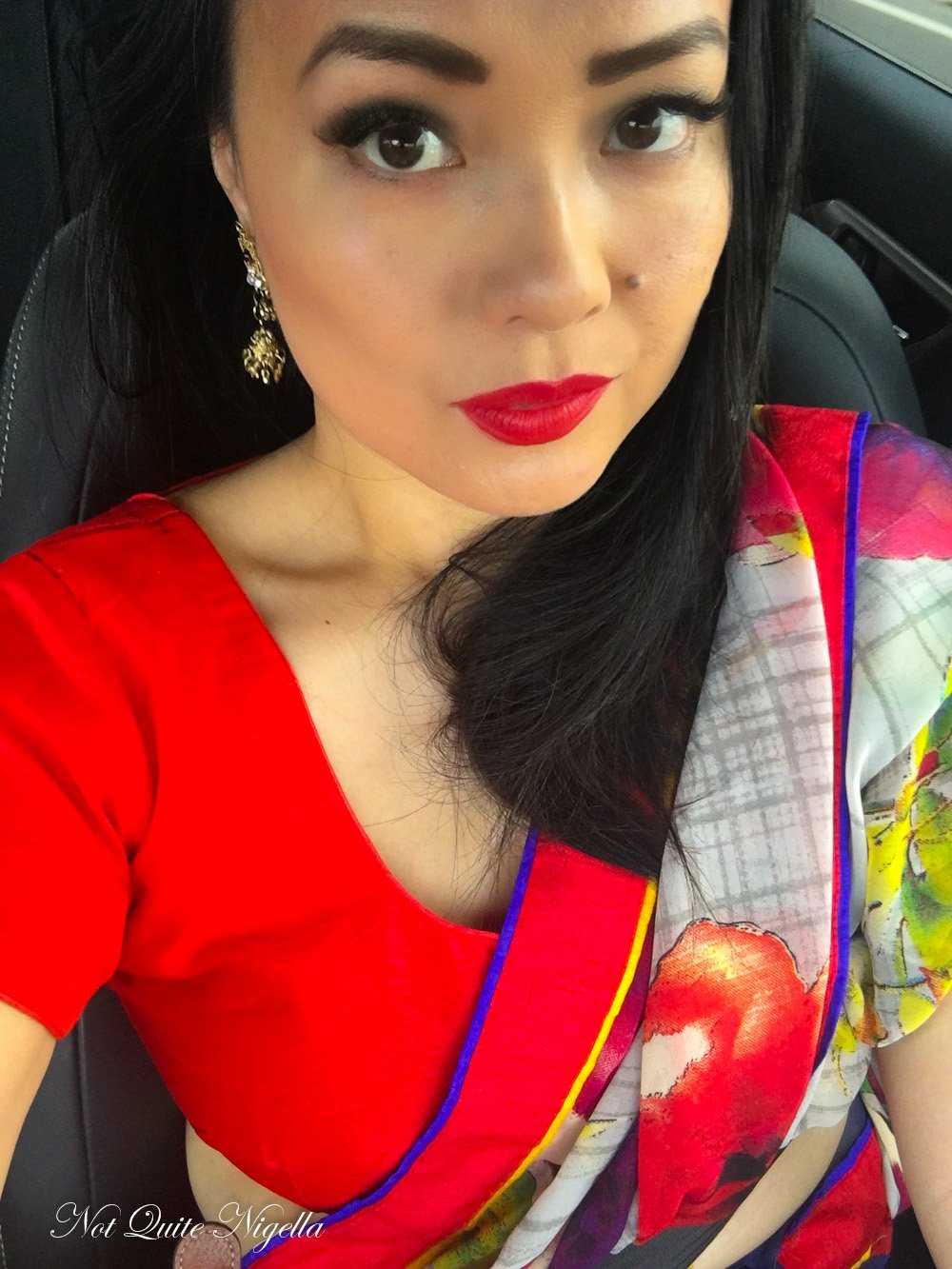 I have no idea why I look so serious here, I was smiling the entire time. I blame resting b^&h face...*

After just over an hour the ceremony is completed and it's time for a group photo-a surprisingly easy feat given the size of the wedding. It was then off to lunch at the Parramatta Town Hall, a pink Victoria Free Classical style building a few minutes walk away. 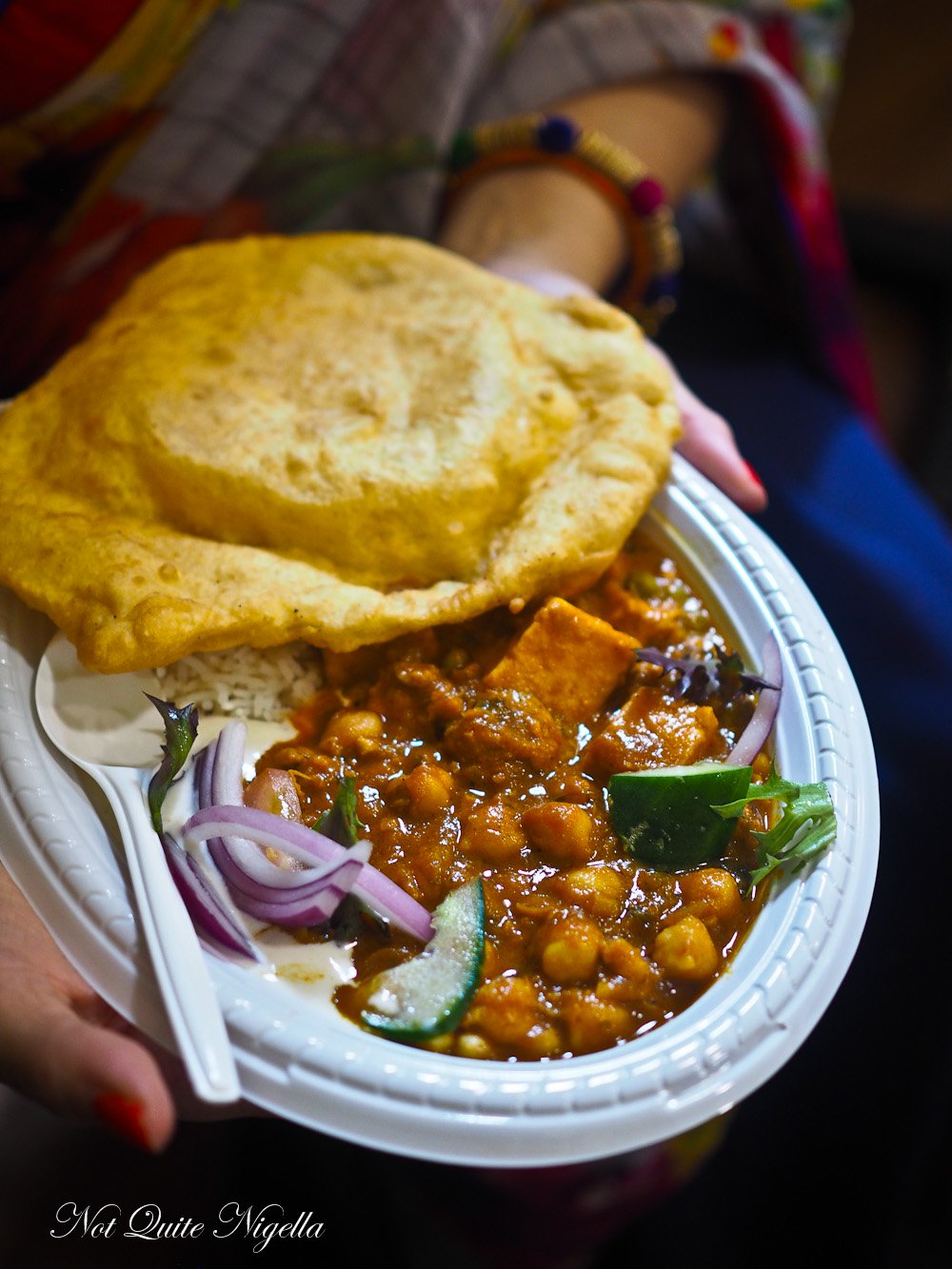 The buffet of vegetarian Indian food is by Maya de Dhaba in Surry Hills and the food is absolutely delicious. There's palak paneer, dahl and a chickpea curry with rice, yogurt, wholewheat fried bread. The desserts are also fantastic with gulab jamen, ras malai and burfi. Often at weddings, the food suffers from mass preparation but here it is perfect. We grab a chair and toast with our chais to Mimansa and Karnik and for letting us be a part of their very special day.

So tell me Dear Reader, have you ever attended a Hindu wedding? Have you ever worn a sari? Do you often order sweet and sour pork? 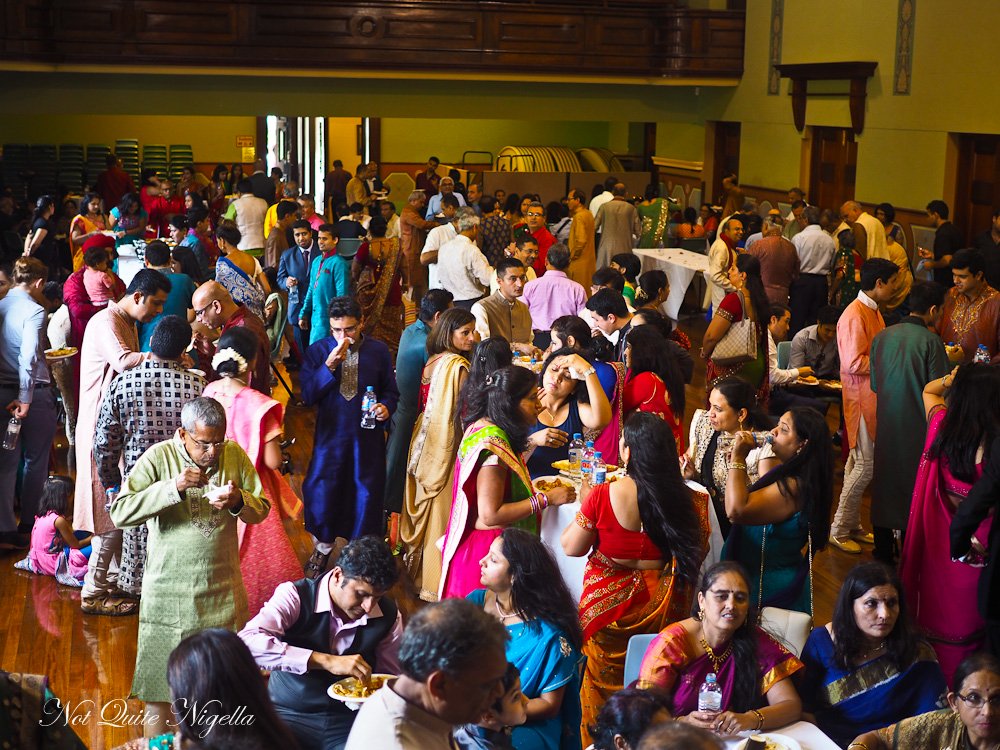 My Mother's Sweet and Sour Pork 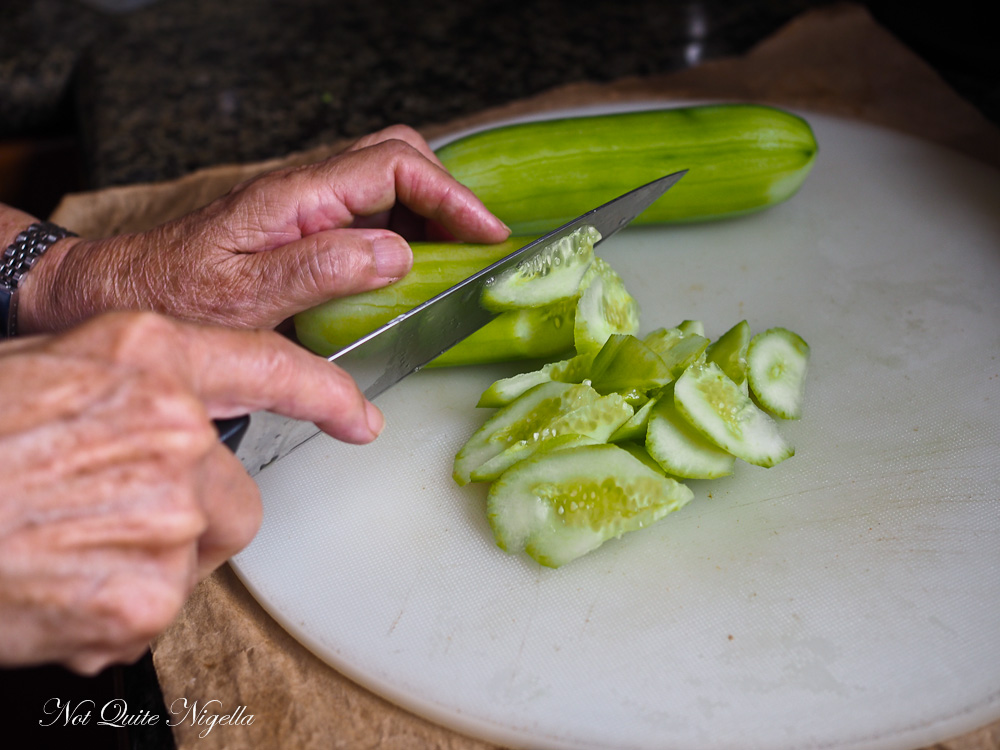 Step 1 - Mix all of the tenderiser ingredients together except for the cornflour. Mix with the pork pieces and allow to tenderise for 15 minutes. 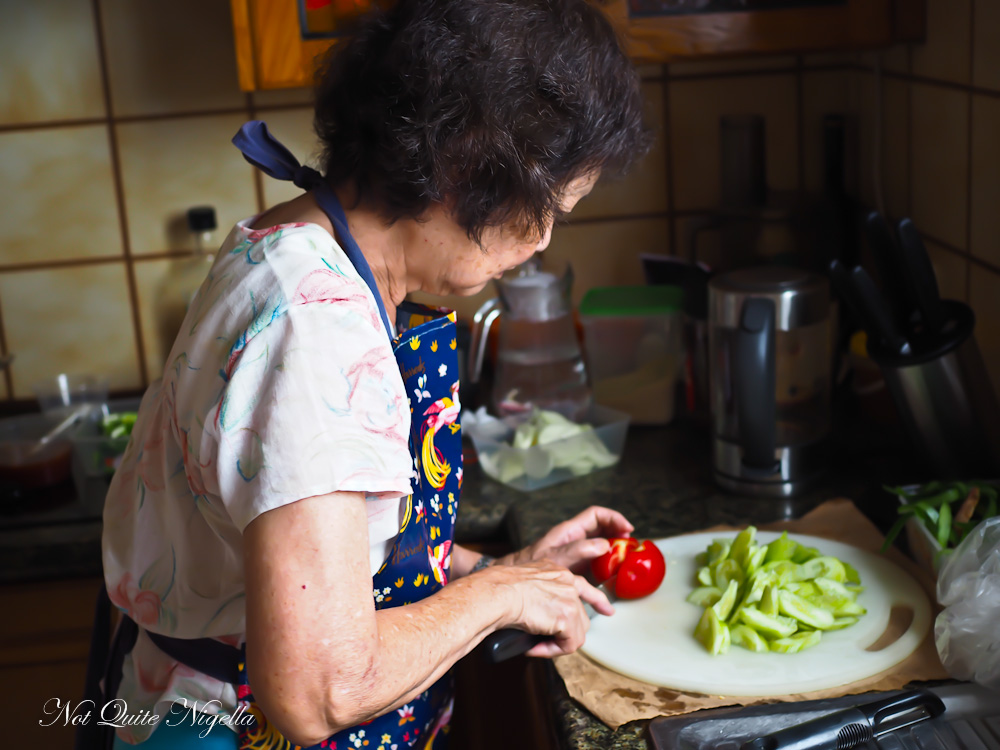 Step 2 - While it is tenderising, mix all of the gravy ingredients except for the cornflour water mixture. Have all of the ingredients cut and ready to add as it is quite quick once you get started. Add the tenderiser cornflour to the pork and coat each piece with the cornflour. 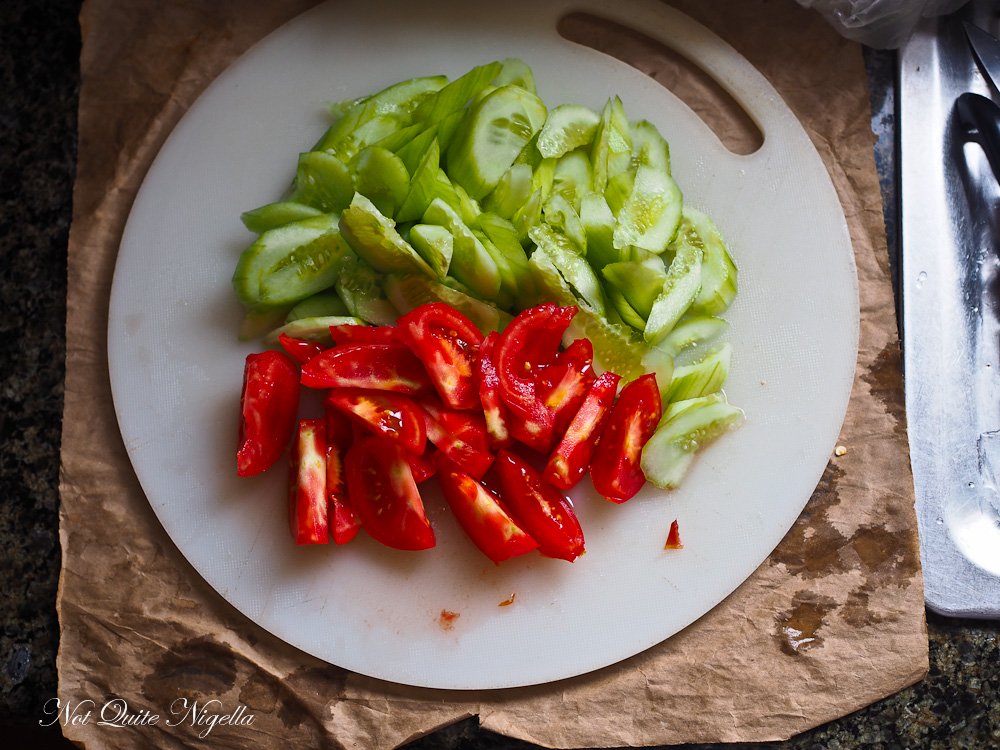 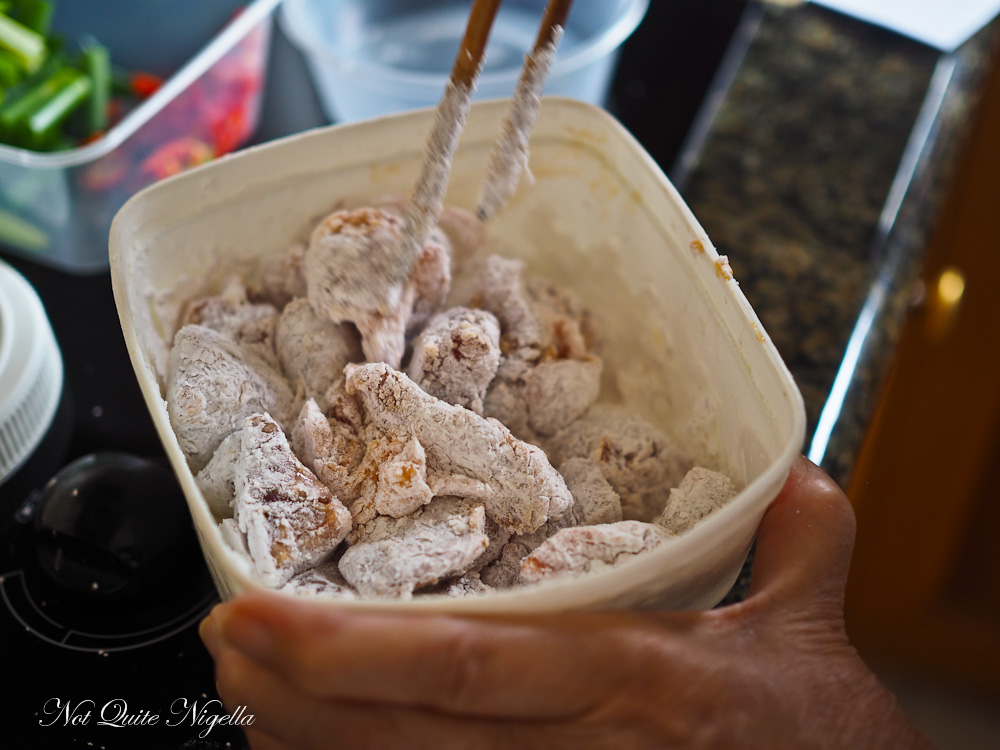 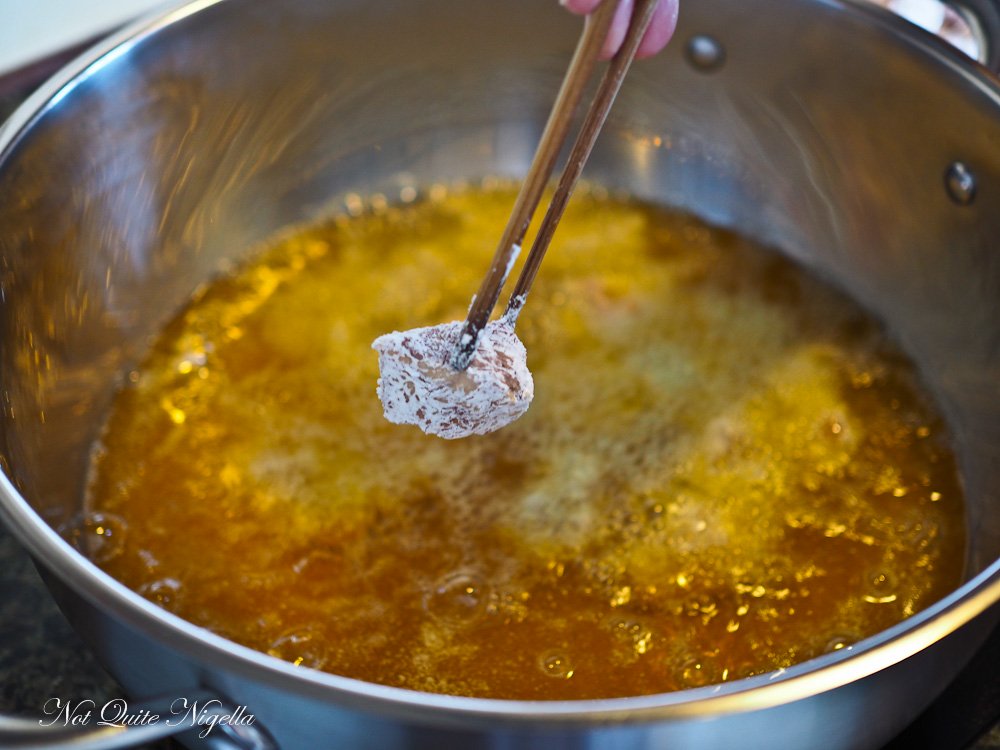 Step 3 - Heat enough oil to deep fry in a wok or pan and when it is ready deep fry the pork pieces. Drain on a plate lined with paper towels. Do not overcook these-they won't get very dark as this is cornflour. Drain the hot oil (be very careful, it's very hot!). 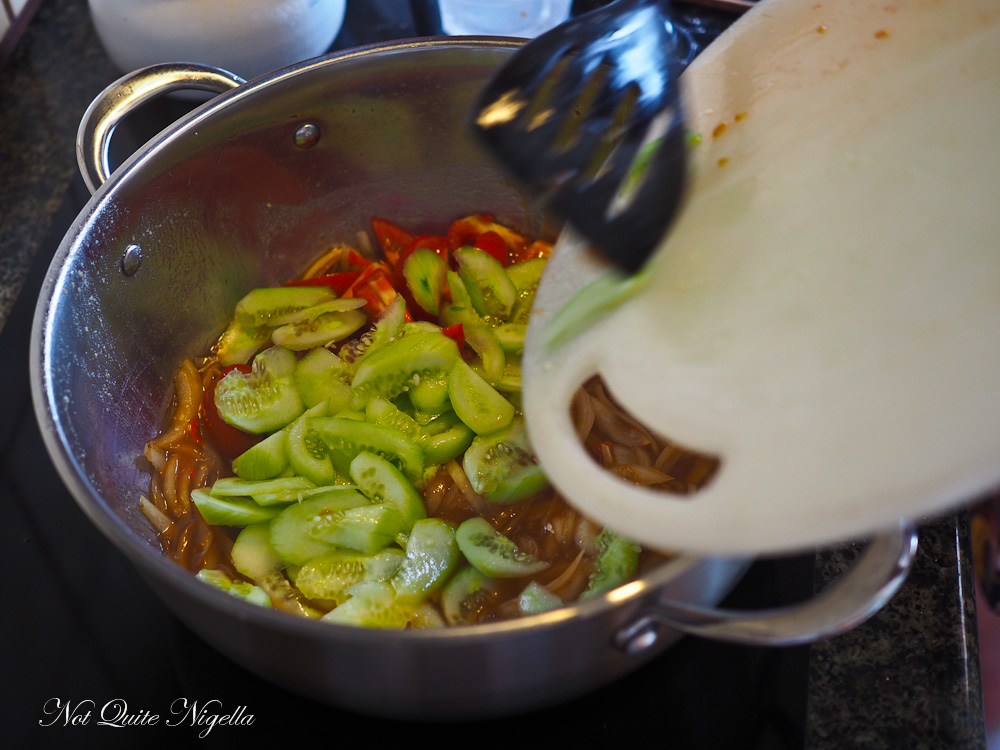 Add a couple of tablespoons of oil back to the wok or pan and add the onion and fry until translucent. Add the gravy sauce ingredients and bring to a simmer. Add in the cornflour and water mixture to thicken the sauce. Add the cucumber, tomato, spring onion and red chilli. Add the pork back into the pan and coat the pieces with the sauce. Serve immediately.