My Mother's Bakkwa or Asian Jerky! 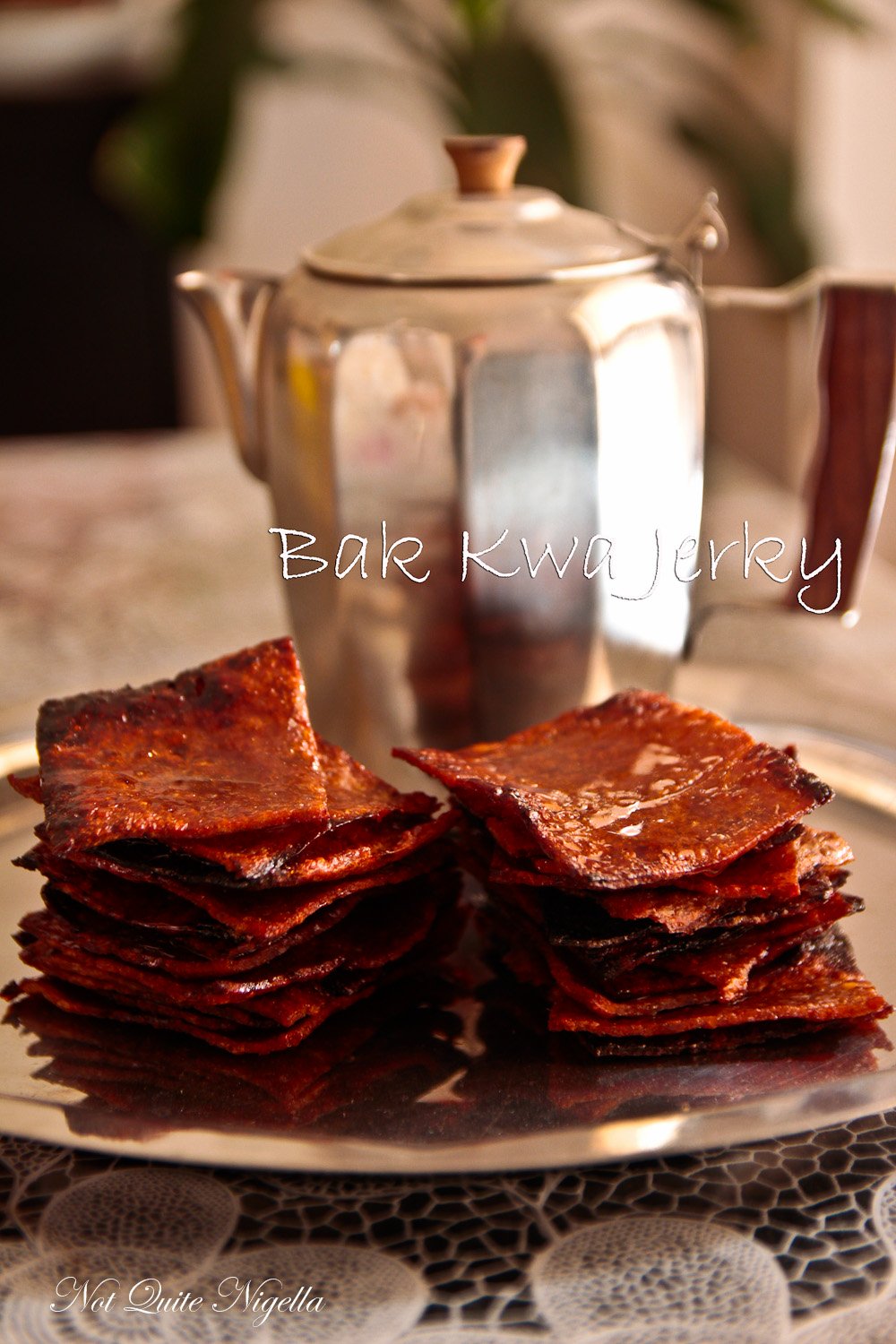 Once you try Asian jerky or bakkwa you may never want regular jerky again. This pork based jerky (you can also use beef) has seasoned meat and a caramelised honey top. Usually it is quite expensive when you buy it but you can make a version for much less at home. Not only that but it is straightforward to make!

I woke up a bit dazed when the alarm went off just four hours after I last checked the time. I looked down and I wasn't Holly and Mr NQN wasn't Hugh Hefner. But that whole morning I felt as though I needed to remind myself of that. Then I went to see my mother to cook something together. She had just come out of hospital so she was really just supervising me doing the cooking. We were running late and I was expected at a lunch at Red Lantern on Riley at 12 o'clock. We watched the oven trying to will time to work in our favour but come 11:30am we were still cooking. When we were done I rang them and asked if it was too late to come along and I was assured that 1pm was fine. 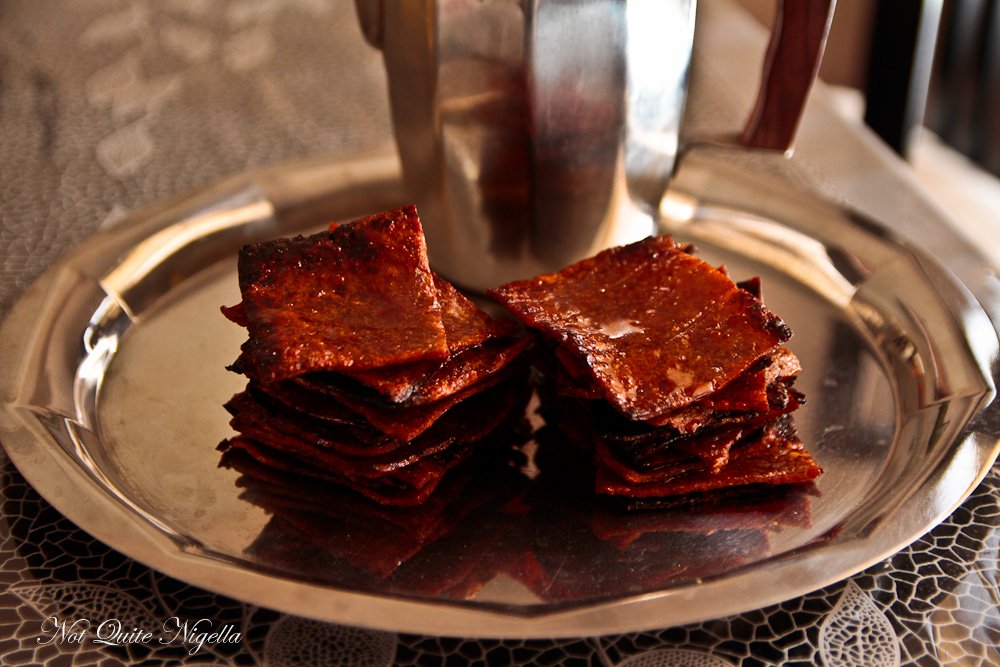 I rushed off and got to the restaurant and drove around. There was no parking (first world problem, yes I know). I tried the paid car park and two rounds of the streets and there wasn't a spot to spare anywhere. I rang them and it looked like I had no choice but to go home! It was one of those weird moments. I felt terrible for taking up a space and I'm sure they thought "What sort of half wit can't find a park?" but truly I couldn't. The closest ones were 20 minutes walk away and lasted only for 1 hour.

Which left me rather hungry at 1:30pm. It was two days before grocery shopping day so I didn't have much to eat. But then I remembered what I made with my mother. It was a jerky called bakkwa or rougan. My mother asked me if it would be popular with readers and I had to admit that I wasn't sure. It is one of those things that Singaporeans, Malaysians and Chinese love (it comes from the Fujian province) but has yet to really cross over to people outside those countries unless they've actually tried it (and some countries do similar versions). Once you try it, it's so delicious that you can't stop eating it.

If you like jerky then I think you may love bakkwa, especially if you like a bit of honey sweetness to your jerky. It's easy to make and produces a delectable, lip smacking meat jerky that isn't too dry, it's just the right amount of lusciousness. It's a popular item come Chinese New Year The hardest thing and it isn't really hard is getting it thin enough and that problem is solved with a rolling pin. The rest is pretty straightforward. Before long you will be chewing on a square of sweet bakkwa! 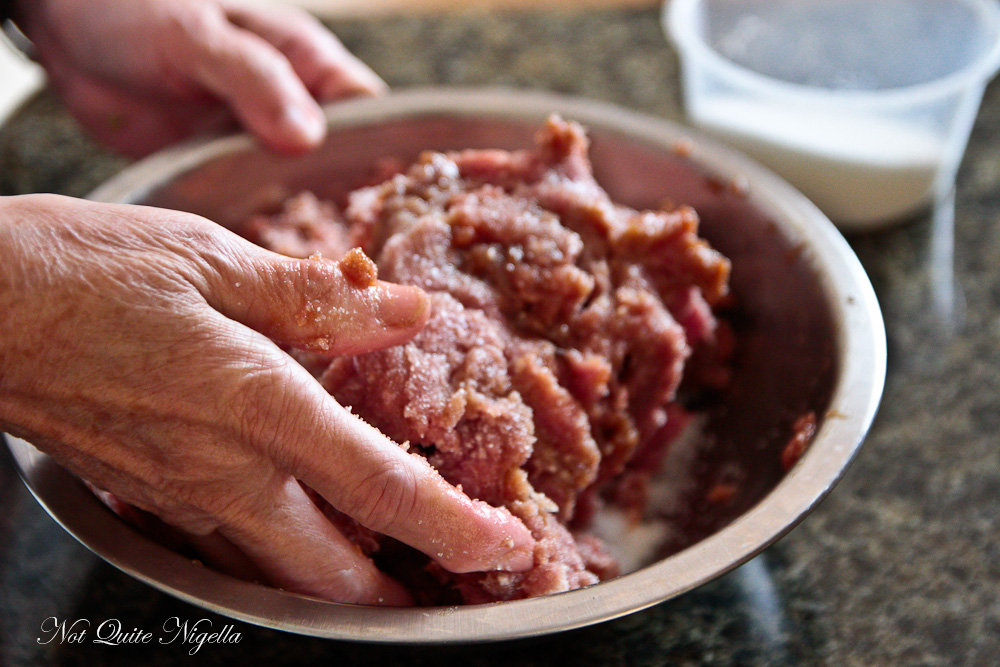 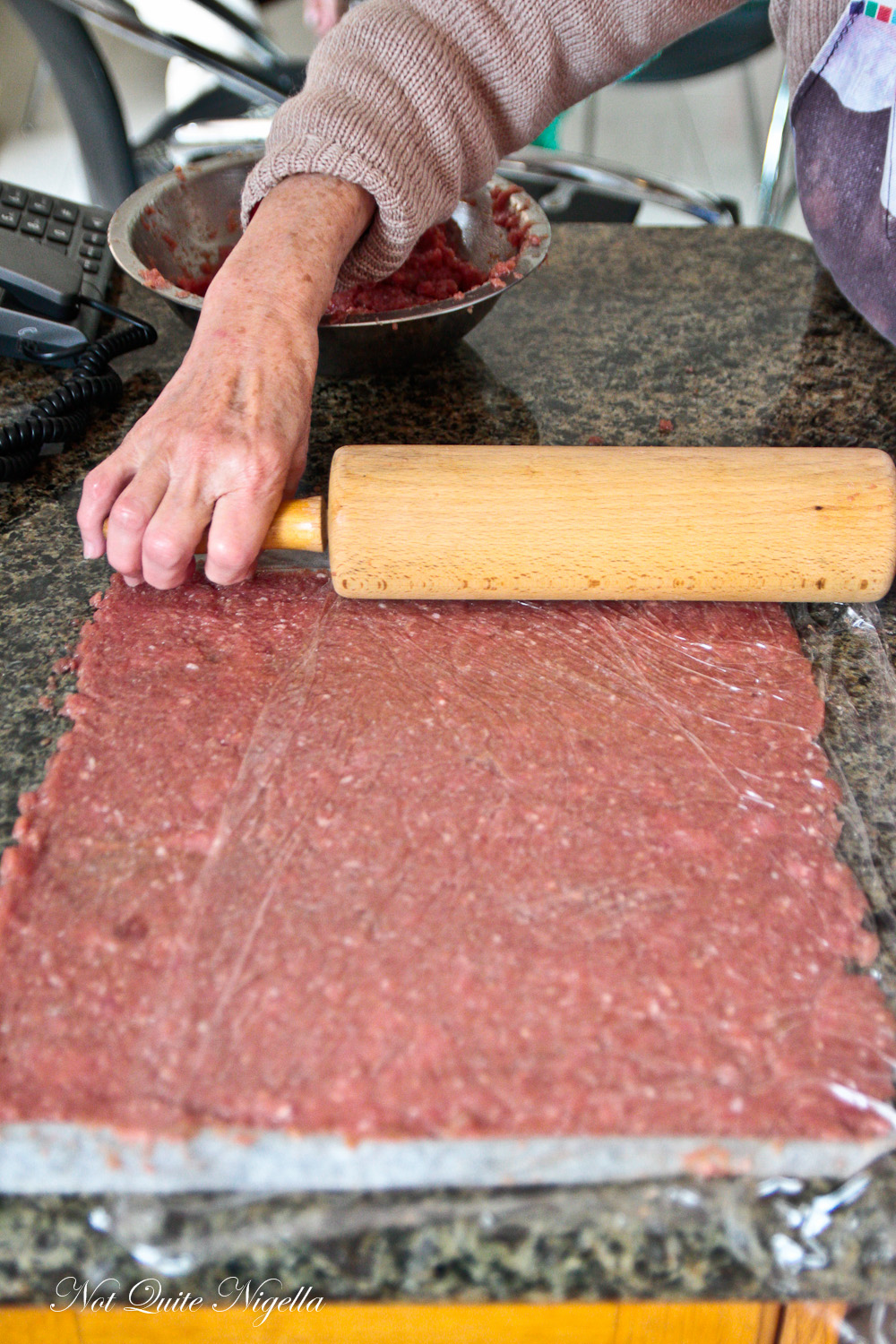 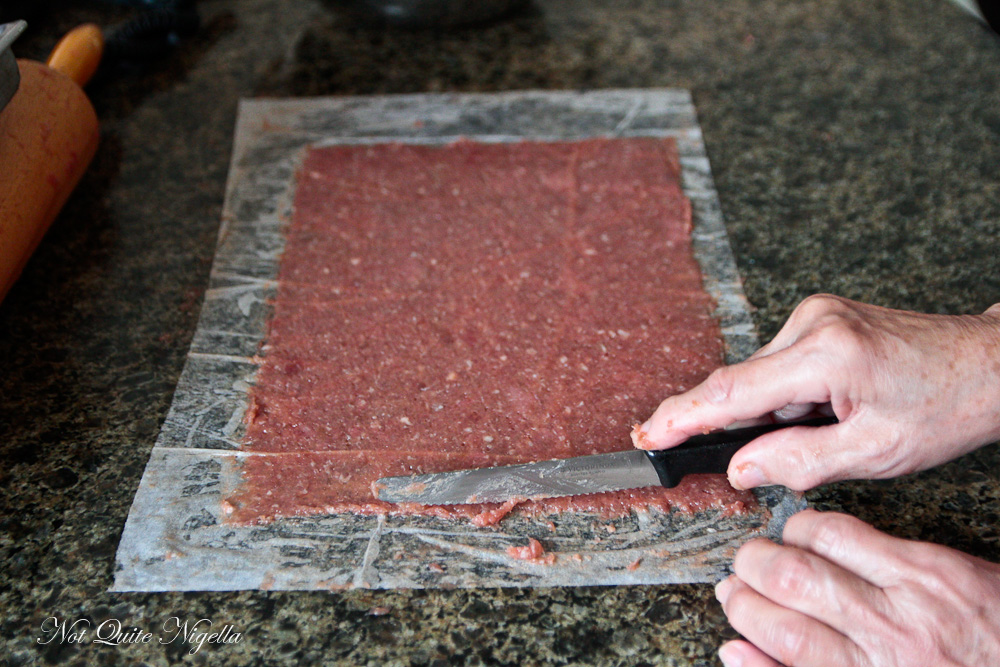 Step 2 - The next day preheat oven to 150C/300F. Divide the dough into roughly five portions and have a few baking trays ready. Tear off five sheets of parchment around the size of your baking trays. Lay out one of the portions of seasoned mince on one and cover with cling film. Roll out to the edges as thinly as possible without making any holes in the mince. The first one that you make will probably be too thick if you are anything like us and then the subsequent ones will be thinner. Lift the parchment onto the baking tray. 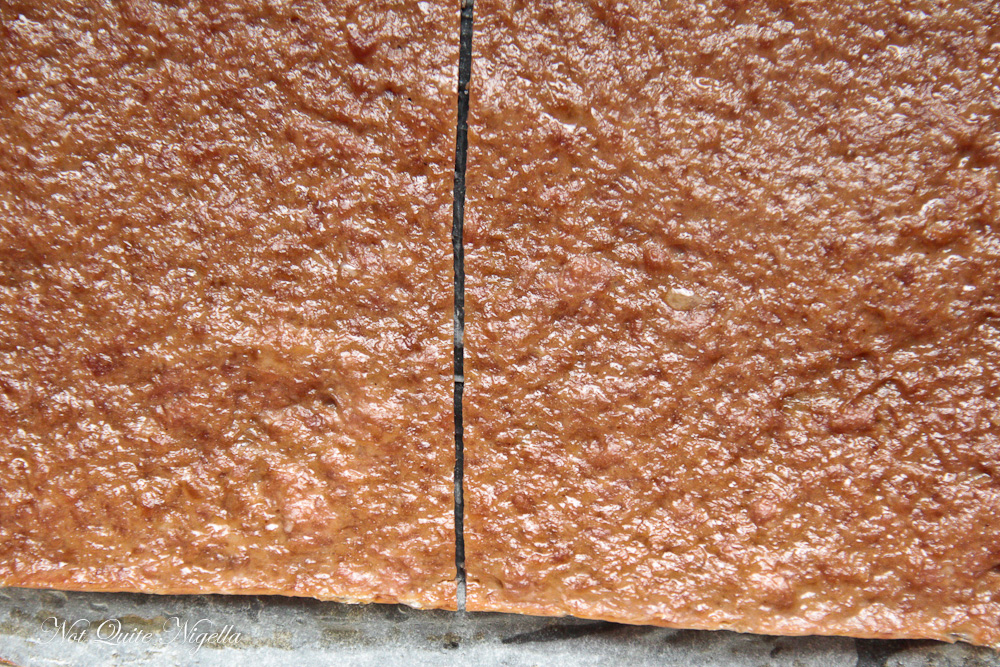 After the first bake

Step 3 - Bake for 15 minutes. Then remove from the oven, cut into pieces and turn over and bake for another 15-20 minutes. 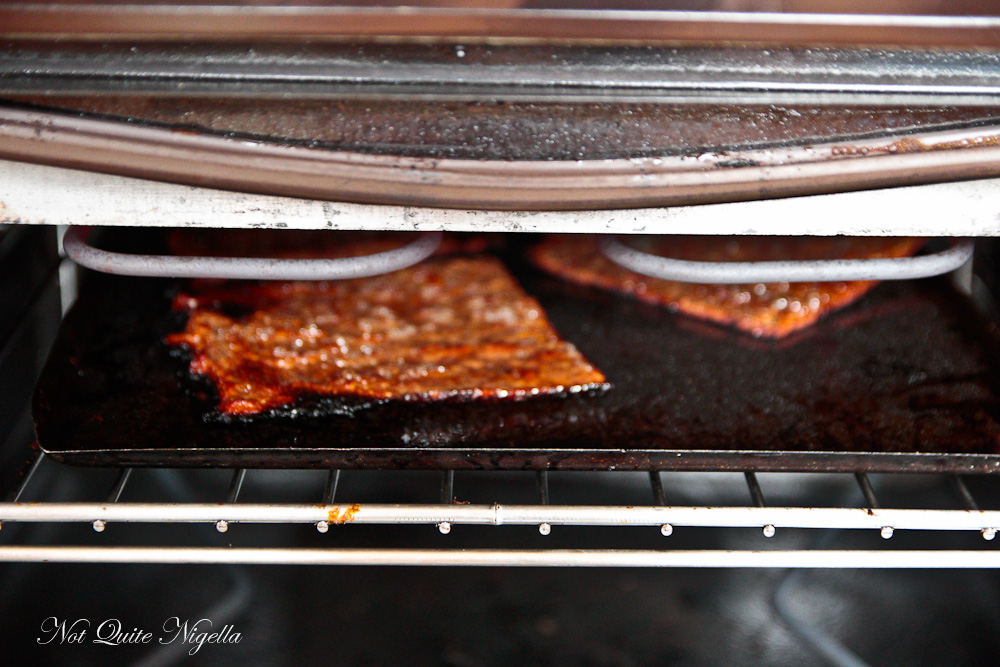 Step 4 - Turn the grill on. Remove the parchment from under the pieces and brush the jerky with the honey mix. Grill for a couple of minutes on each side until you get a nice caramelisation from the honey. Watch it carefully as the honey does make it burn quickly. Bakkwa is best served 24 hours after it is made and can be kept at room temperature for up to a week or vacuum sealed for longer (it's best not to refrigerate it as it can lose flavour).