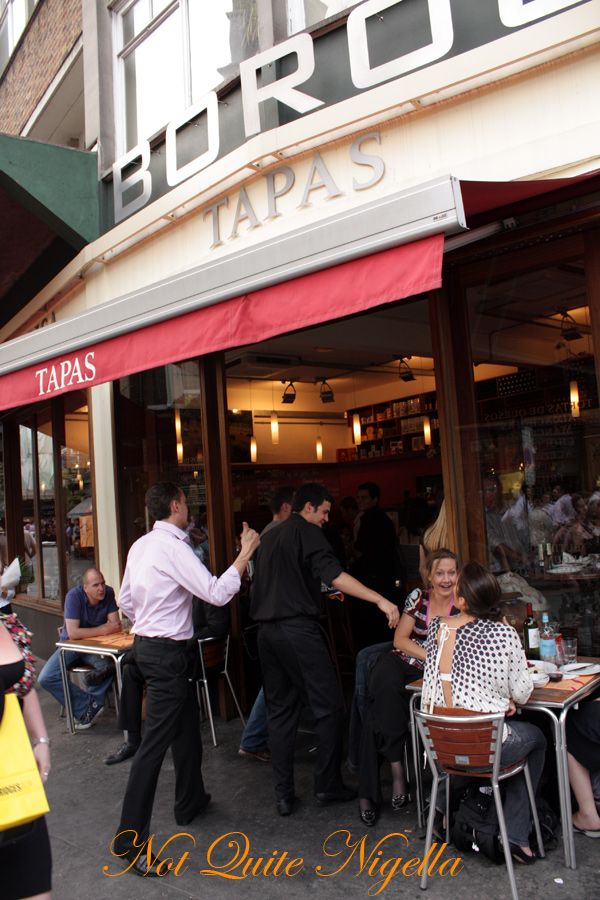 Tapas Brindisa can be intimidating. Intimidating in that it is ALWAYS crowded, no matter what time you go past and that unless you flag down the manager, you'll stand virtually ignored, a persona non grata. Brindisa doesn't take reservations and given the roaring trade, it doesn't need to. Reservations would simply hold up the process. I adore Spanish food and my gut instinct tells that it is taking over the world (or at least my little part of it). And the thing that has my tastebuds drooling is the idea of eating Jamón ibérico de Bellota, the Wagyu of pork where in Spain or Portugal Black Iberian pigs are raised on a diet of acorns and allowed to roam free in oak forests. The ham is then cured for up to 36 months in the fresh mountain air.

We're back at Tapas Brindisa at dinner time after being the ignored subjects mentioned above at lunch time when people and plates were whizzing past at a furious speed and our presence caused not a single soul to look our way. We didn't realise that we needed to get the attention of the manager so we stood there for 10 minutes before leaving as we realised that a table would not be forthcoming, not just because of the huge queue of people already waiting. 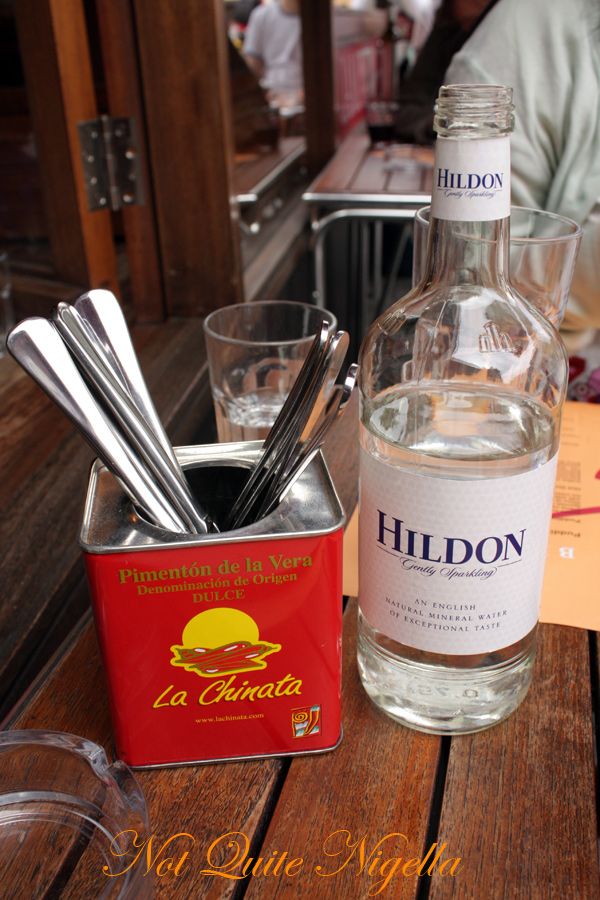 Tonight, fortified by false courage, I steel myself and approach the manager thinking that I'll be dismissed but he gives a broad smile and apologises that there aren't any table available but that one should be in about 45 minutes so we can come back in 30 minutes. We go for a walk around and take a peek at Neal's Yard (who have a huge shower running in their store, presumably for moisture to aid in the cheesemaking process) and a Paul Smith store nearby before we return 30 minutes later. There isn't a table yet although the manager tries to get another table outside set up for us. We wait outside as inside is chaos with bodies standing, sitting and waiting while waiters weave through them with plates of delicious Spanish Jamón and tapas.

While waiting, we ask the manager what time is good to come by and he says "5.30pm but once it is 6 o'clock, all of the tables are gone. At lunch, maybe 12noon?". A friend who has been here previously has said that even 12 o'clock is too late, it's 11.50am or nothing. Once the clock strikes 12, it's musical chairs. He offers us all drinks on the house (wine or soft) for the wait which is a welcome and charming gesture. A table magically frees itself a few minutes later and we are sitting with our complimentary drinks (a gigantic bottle of sparkling mineral water, a Coke and a Rosé wine). 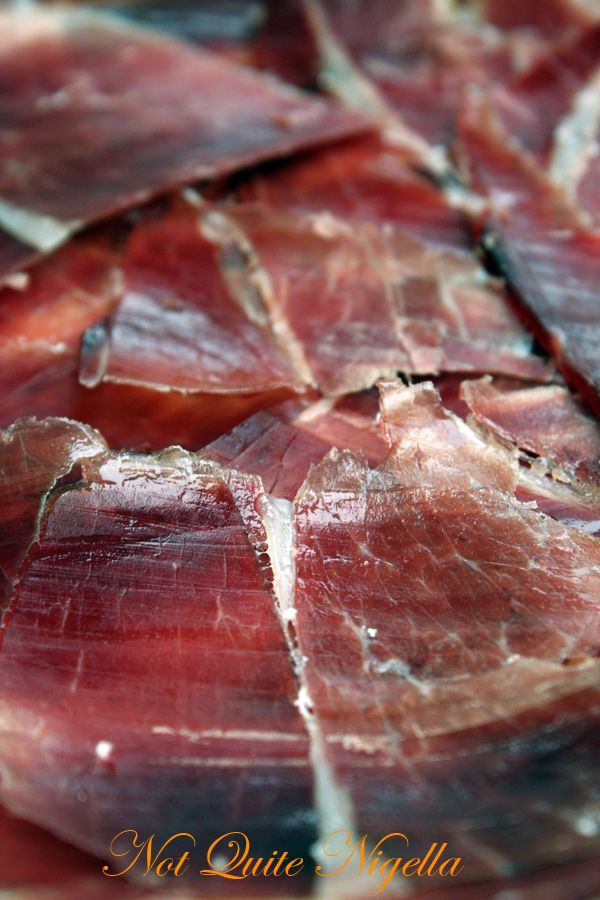 We've already perused the menu having done so while waiting and we ask the waiter if any of the Jamón ibérico de Bellota (Pata Negra) is available and he smiles broadly as if we've said the magic words and says "Pata Negra?" and we nod enthusiastically. He points us to the "Gran reserva Joselito Ham-hand carved" for £20 which we immediately order. We also order the Regional charcuterie selection: Teruel Serrano ham, loin, chorizo and salchichon with bread and olive oil £10; potato, chorizo and pepper omelette with aioli £4.65; Deep fried Monte Enebro goat's cheese with orange blossom honey £6.65 and for good measure, some spicy toasted broad beans £1. 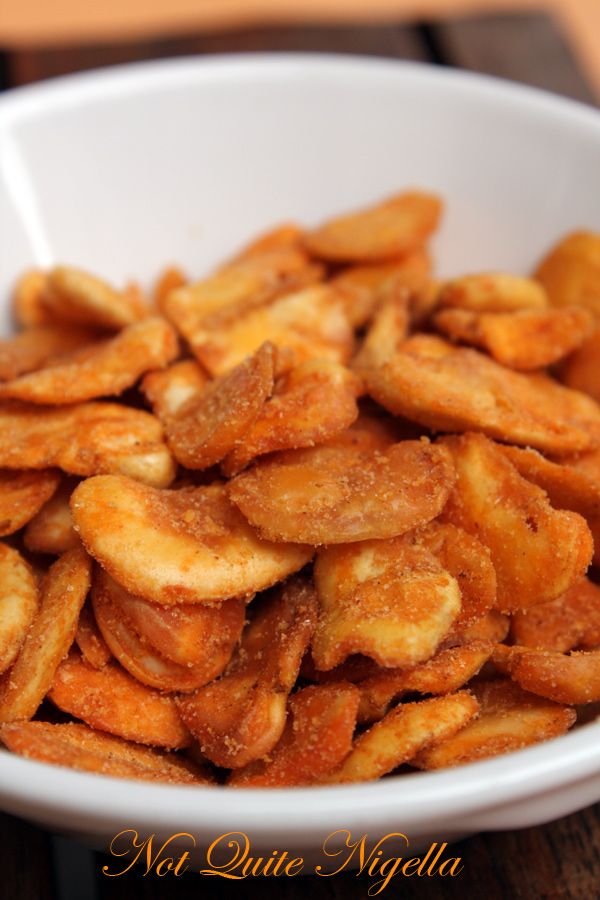 The first to arrive is the small plate of spicy toasted broad beans, the beans dried and crispy with a liberal sprinkling of spice powder. They're like good quality chips. 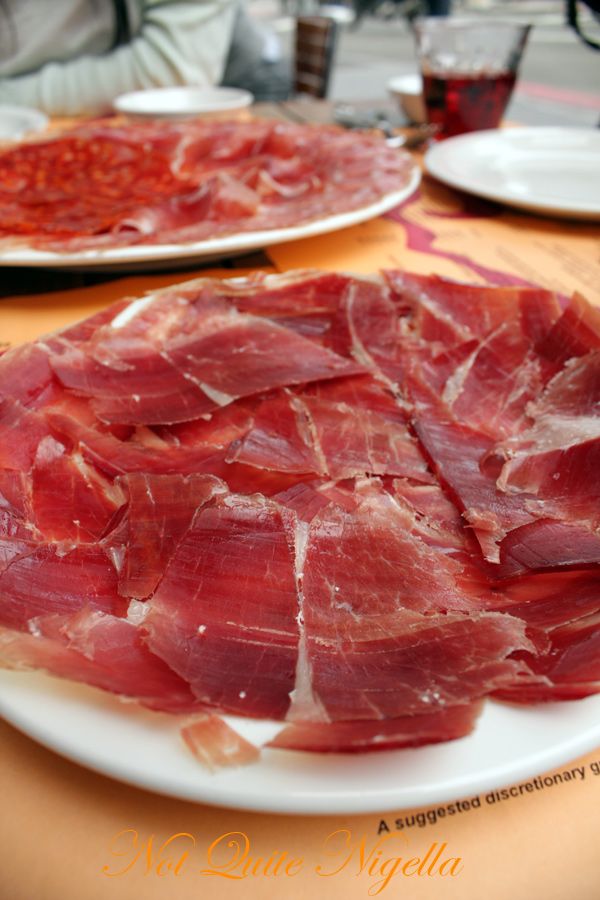 Our prize, the Jamón ibérico de Bellota arrives next, hand carved and arranged on a plate. I'm surprised at how much we get, from what I've seen you get 3-4 slices of it in Australia for about $30 but this looks like more. Tasting it, it's smooth and intensely flavoursome, a bit like a meat jerky but please don't let that description put you off, it's much, much better of course. I mean more as a testament to the intensity of the flavour. 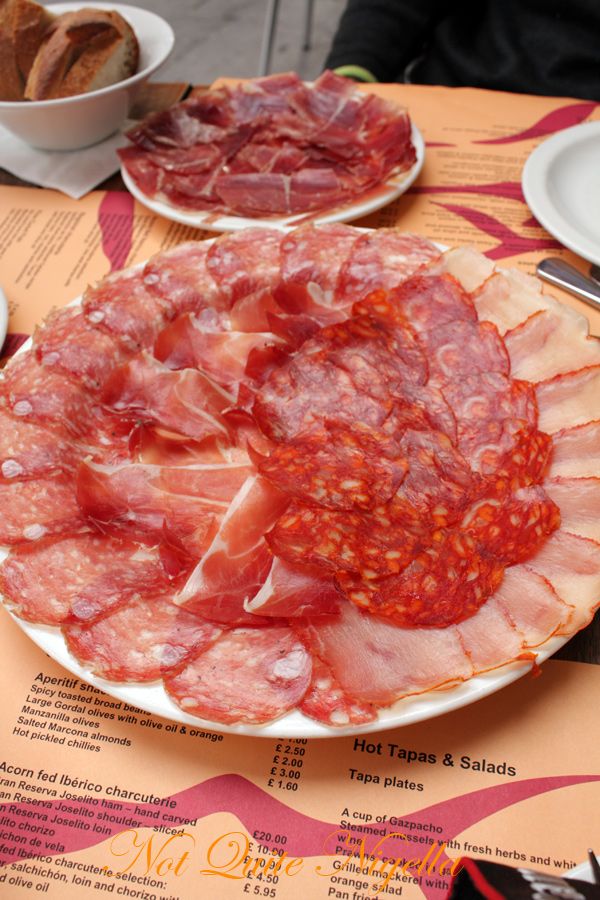 Our regional selection plate is certainly impressive and causes passing pedestrians to almost bump into each other and drool over our table. There is loin (the pale slices), chorizo (thinly sliced rounds), salchichon (another speckled sausage) and Serrano ham, the paler version of the Jamón ibérico de Bellota. 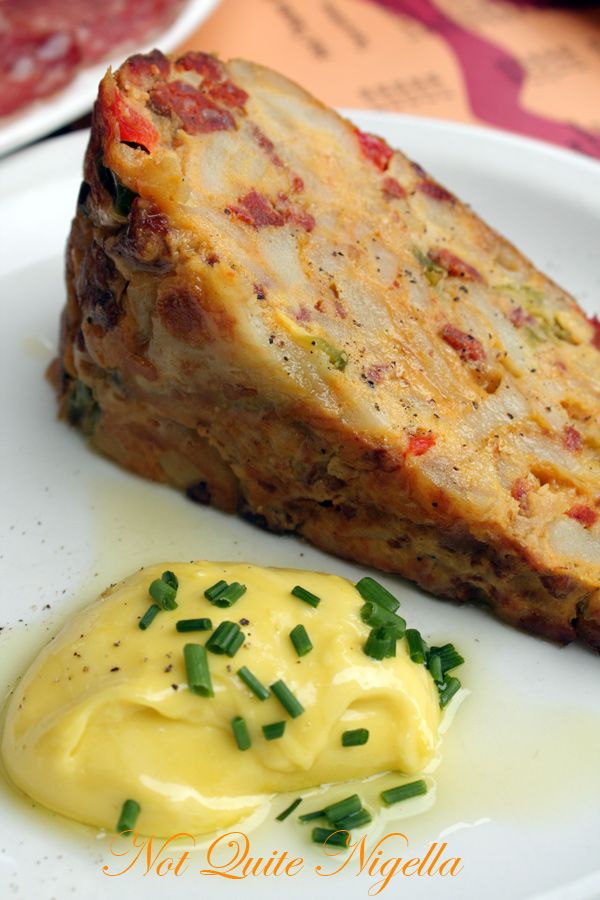 The thick cake slice of omelette is richly flavoured with very finely ground chorizo, potato and tiny pieces of peppers. 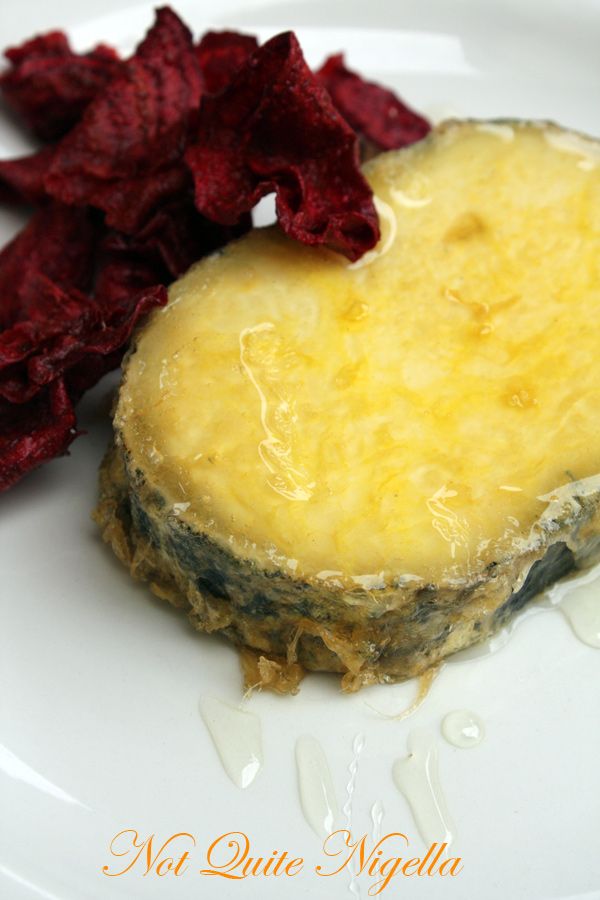 The Monte Enebro's goat's cheese looks mouth watering with it's lacy fried outer and glazed honey topping. It is a mild blue cheese which goes perfectly with the bread given and the charcuterie plate. And yes, it tastes as good as it looks.

We're immensely happy with our meal, even my husband who initially gristled at the idea of paying £20 for a plate of ham can't fault our meal and the service and is happily grinning. Ahhh this is why Londoners can't get enough of Brindisa. 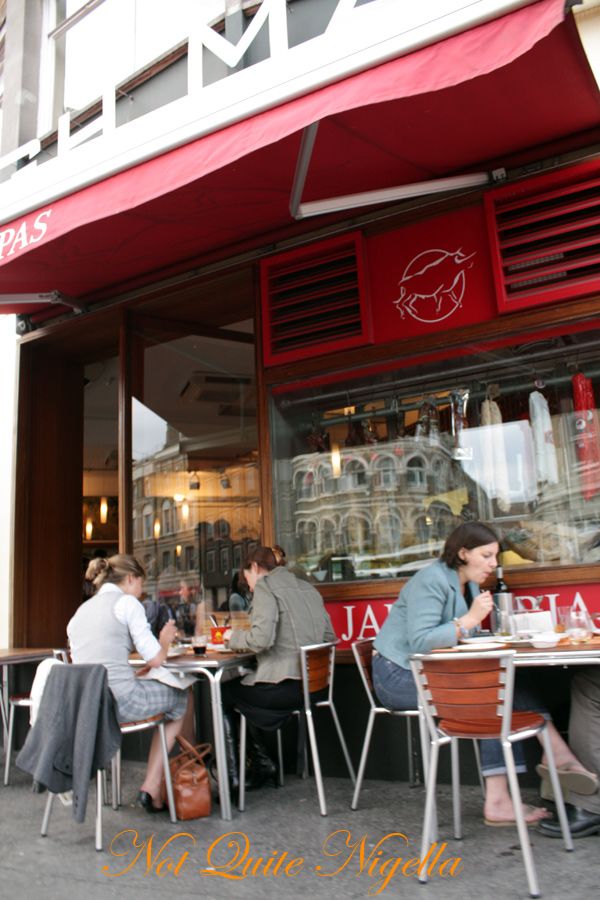