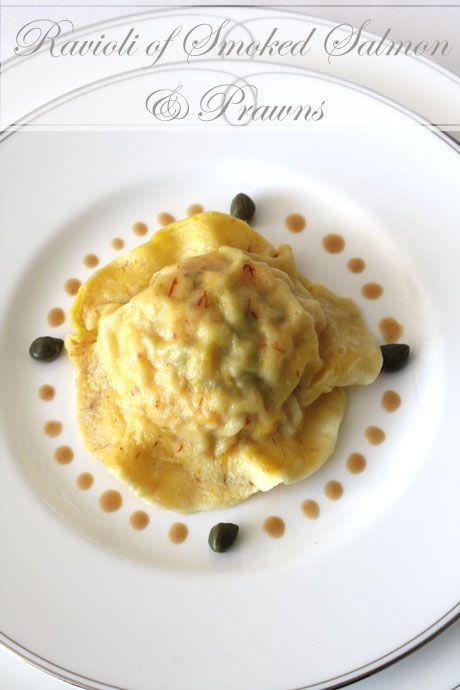 Reading Gordon Ramsay's 3 star chef, I was immediately struck by this dish. Lobster just happens to be one of my favourite items in the world, along with salmon and prawns. Gordon's ravioli of Lobster and Langoustine is one of his signature dishes and indeed appeared on the menu when I dined. I didn't choose it as I wasn't ordering from that menu sniff sniff. 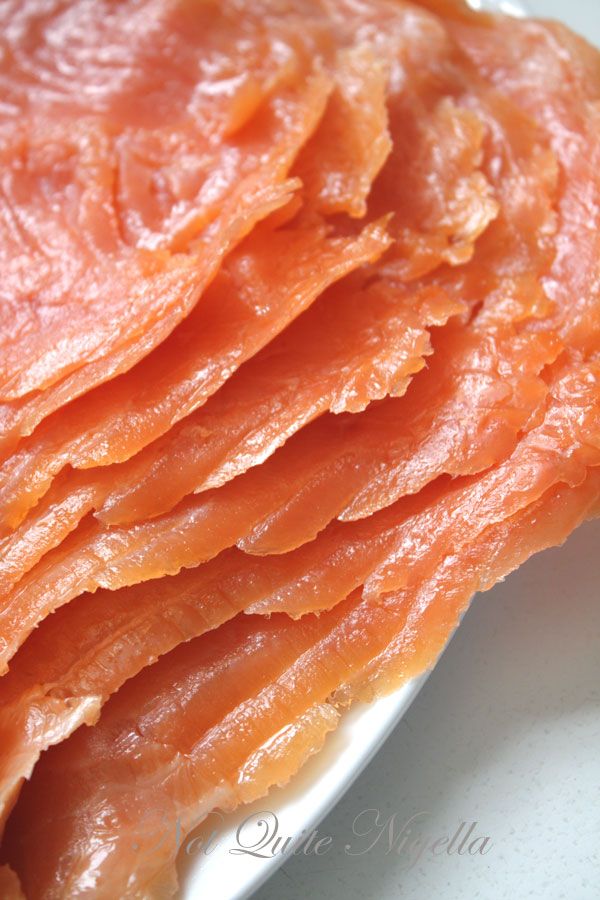 I adapted the recipe to feature smoked salmon as I got my greedy paws on some deliciously perfect smoked salmon slices. Yes I'm one of those greedy sods who can eat packets of the stuff and still hold my hand out for more. I have made ravioli before using Chinese won ton wrappers but thought that I'd give making the saffron pasta a go. I hadn't meant to, to be honest. I actually bought a so called "Fresh lasagne sheets" from the Supermarket but when it came to cutting out the circles and pressing them together, the pasta was hardish and wouldn't stick together no matter how hard I tried or begged or pleaded of it. So despite not having a pasta machine, I was determined not to let this delicious filling go to waste and set about making the saffron pasta dough with a rolling pin. 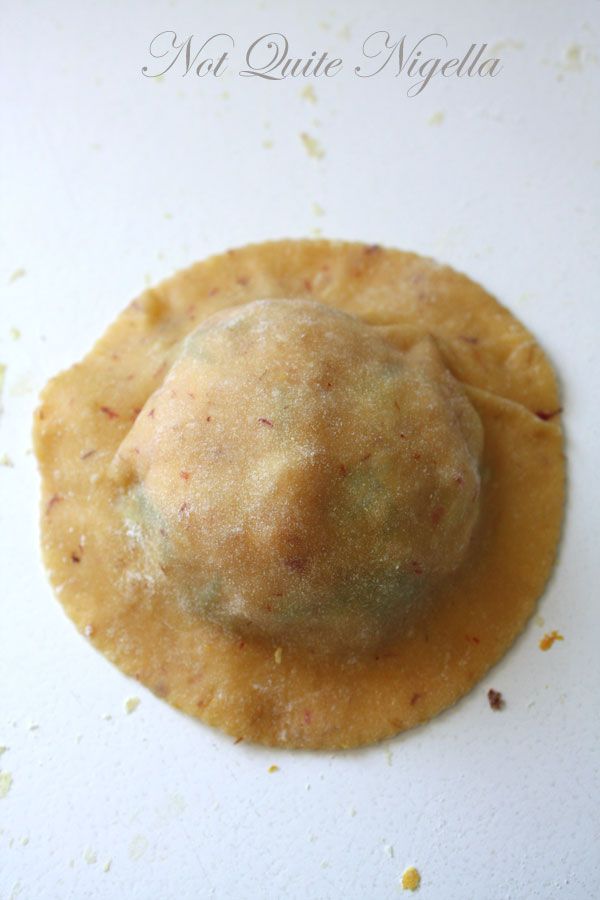 It's not impossible, in fact it can be done using a rolling pin although using a pasta machine would be a better way to salvaging your sanity. All you have to remember is when you think you have it thin enough, you don't. Keep rolling until it is so thin that it is on the verge of breaking and you can see light through it. Of course if you had a pasta maker it would be markedly easier. 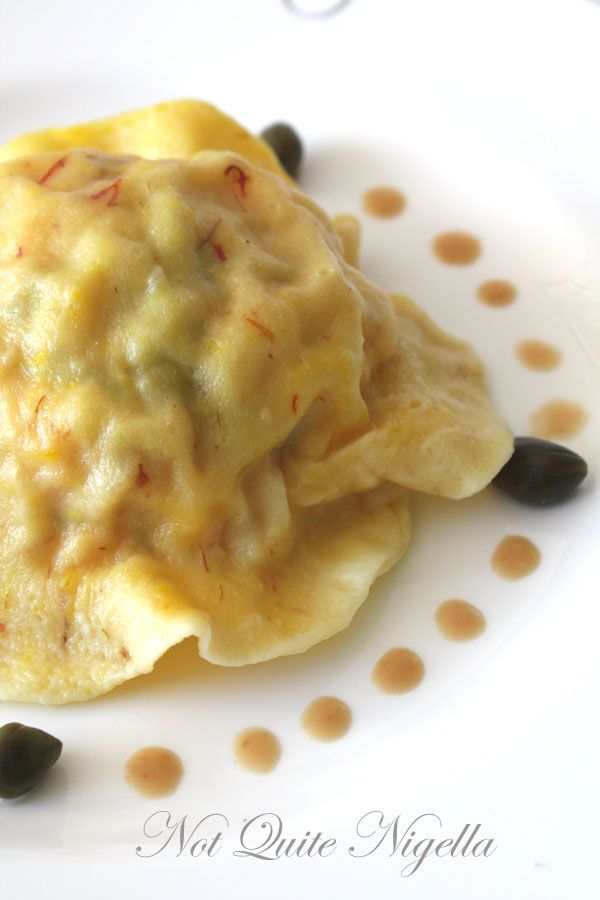 The actual filling is a quite easy although it does require a bit of fridge time every now and then, but the good news is that you can make it a day ahead. He suggests serving it with a soup which you could, I actually served it with a light Japanese sesame dressing as I looked at it as a gigantic dumpling (which I'm sure would simply horrify Gordon). I just didn't have the energy to make up a clear seafood soup after spending an hour as a human pasta machine.

Ravioli of Smoked Salmon and Prawn

Step 1 - Put 100g of the smoked salmon and the cream in a food processor and process until it becomes a paste. Put the paste in fridge for 20 minutes to firm up. 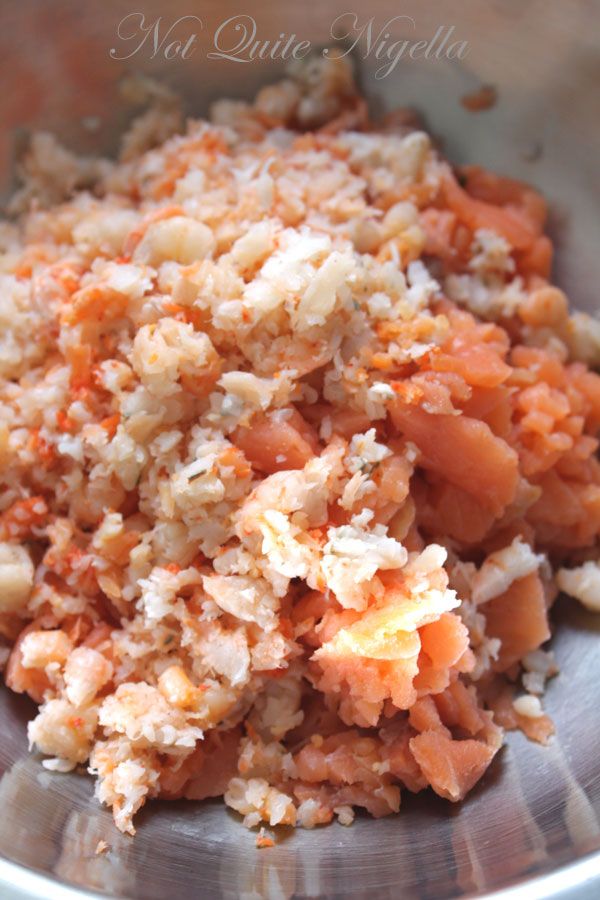 Step 2 - Chop up remaining salmon and prawns. Add to salmon paste along with the rest of the ingredients. Refrigerate for 20 minutes.

Step 3 - Shape into balls (of 75grams each). You can either store these in the fridge for 20 minutes until they are ready to be used or these can keep up to a day ahead of time in an airtight container if you're making this ahead of time. 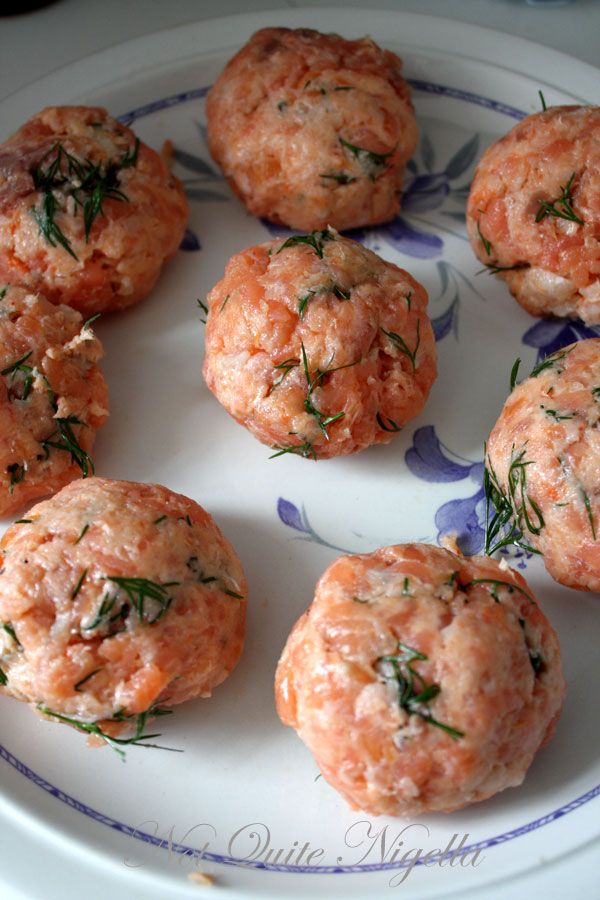 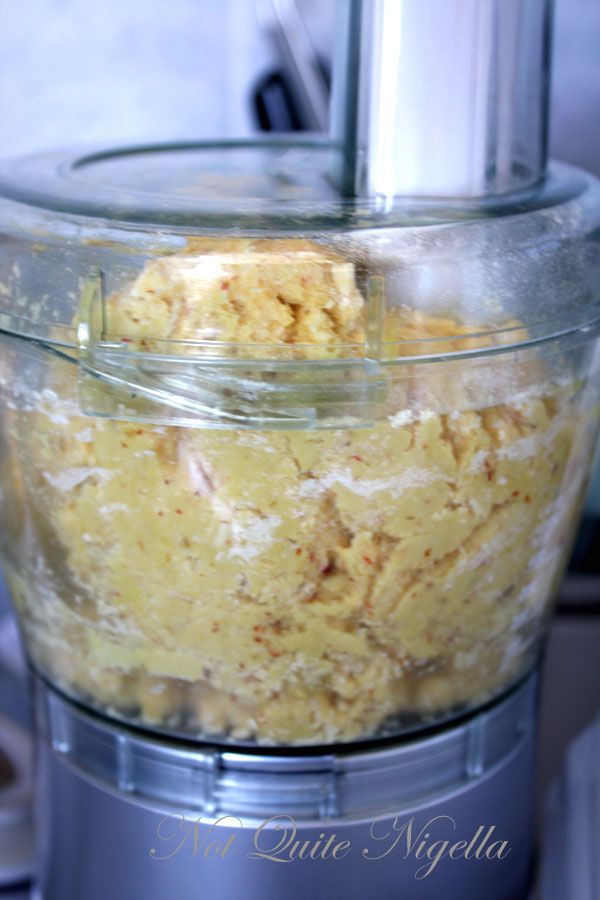 Step 1 - Make up the pasta dough by whizzing the flour, eggs, yolks and saffron infusion in a food processor. Knead dough on lightly floured surface until elastic. Rest dough for 30 minutes. 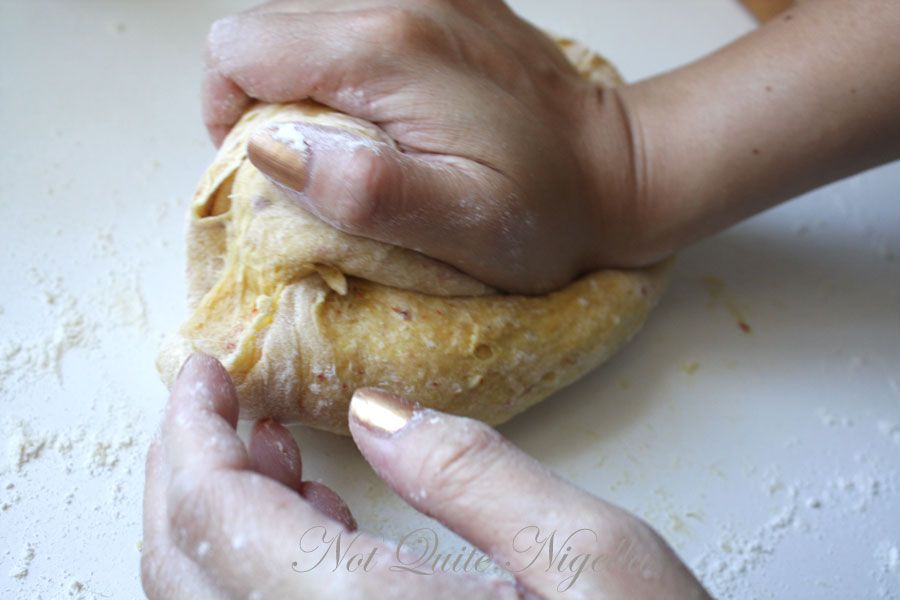 Step 2 - Then pass the dough several times through a pasta machine as normal until you have a smooth dough. Or roll it out several times. Rest a little between rollings. Roll until so thin you can see light through the sheet and cut into large circles.

Step 1 - Roll out pasta dough until as thin as possible and you can see the light through the ravioli. Place one circle on a lightly floured surface and place a salmon patty in the centre. Brush egg wash around the salmon patty. Drape another thinly rolled circle of pasta dough on top and ensure that all air is removed. Press edges together and using a round cutter, cut a large circle (or use a pair of scissors to trim the circle). 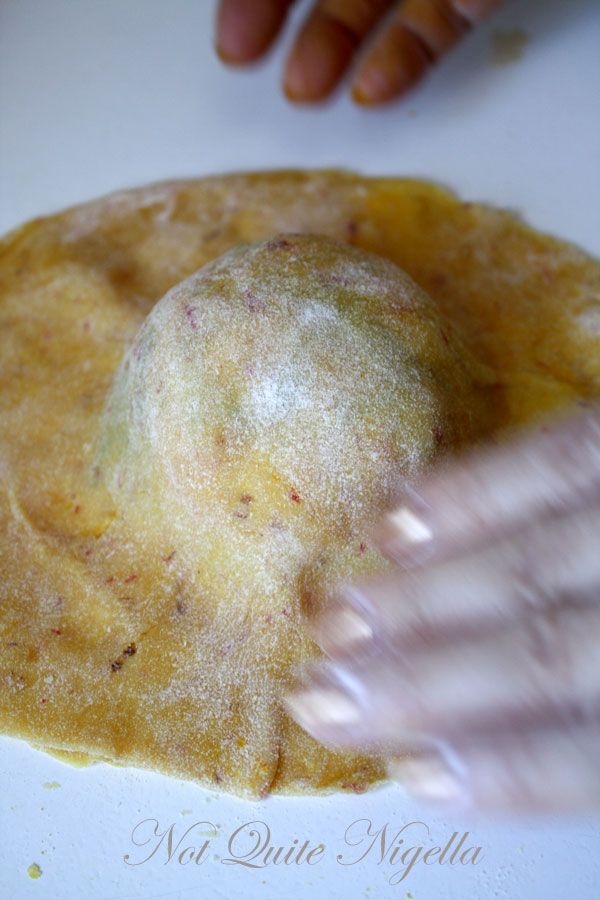 Step 2 - Place a large pot of salted water onto boil. When boiling drop in ravioli carefully and cook for 3-4 minutes. Remove with a slotted spoon.

You can serve this with a seafood broth, I served this with baby capers and a sesame sauce. 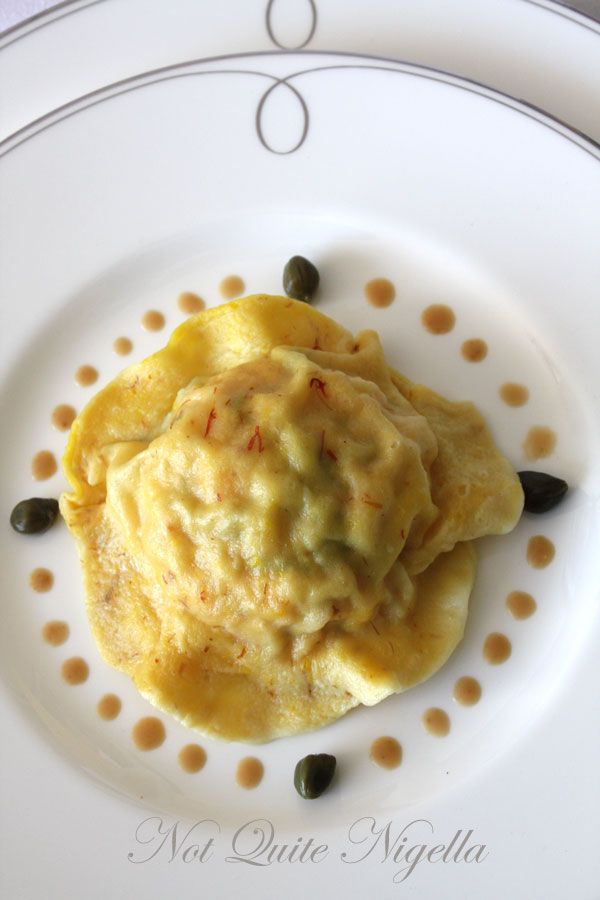