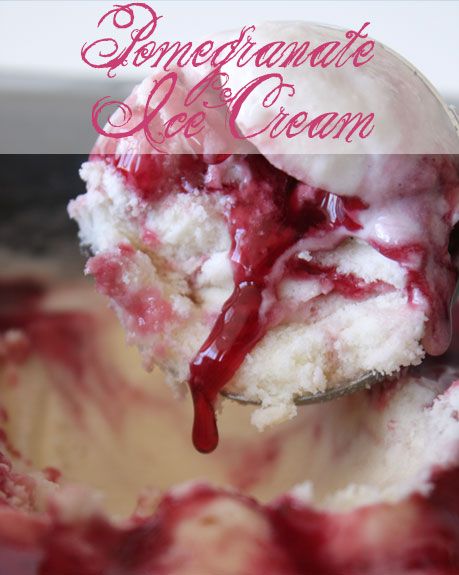 I must apologise for the incessant rambling on about this but there are only a few days to go for voting. Not Quite Nigella has been nominated in two categories for Well Fed Networks awards! Thankyou so much for the wonderful people that nominated me

And if you would like to vote you can do so on:

And now onto the story..

I don't claim that Jackson Pollock had anything to do with the recipe for this ice cream. The title has more to do with my husband's first reaction to seeing the ice cream in its about to be frozen state. I don't even know if Jackson Pollock ate ice cream-do brilliant artists even eat normal food? I always picture them subsisting on cigarettes, tortured stares and "inspiration". 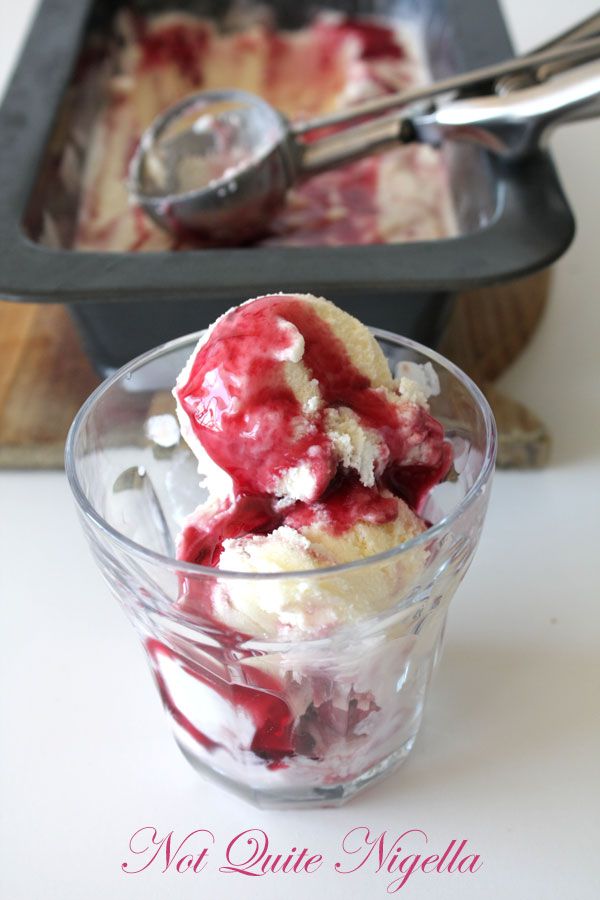 I've spoken before about my love for Twister ice creams. Twister was a Vanilla ice cream cone with a swirl of strawberry and passionfruit syrup through it.  I say "was" as I don't think they even make it anymore which makes me crave it that much more. January is the hottest month here in Sydney and the best, tastiest way to cool off is with ice cream and a home made one is always preferable to me. After making some Pomegranate syrup and finding it absolutely heavenly, I thought I'd give ice cream a bit of a stab. I'm on a bit of a health kick at the moment (although I must admit that the Krispy Kreme "Christmas Pudding" donut I had earlier was a bit of an aberration as far as that endeavour was concerned), so I wanted to make a low fat vanilla ice cream so that you could feel like you're not contributing to the Christmas poundage whilst trying to stay sane in the heat. 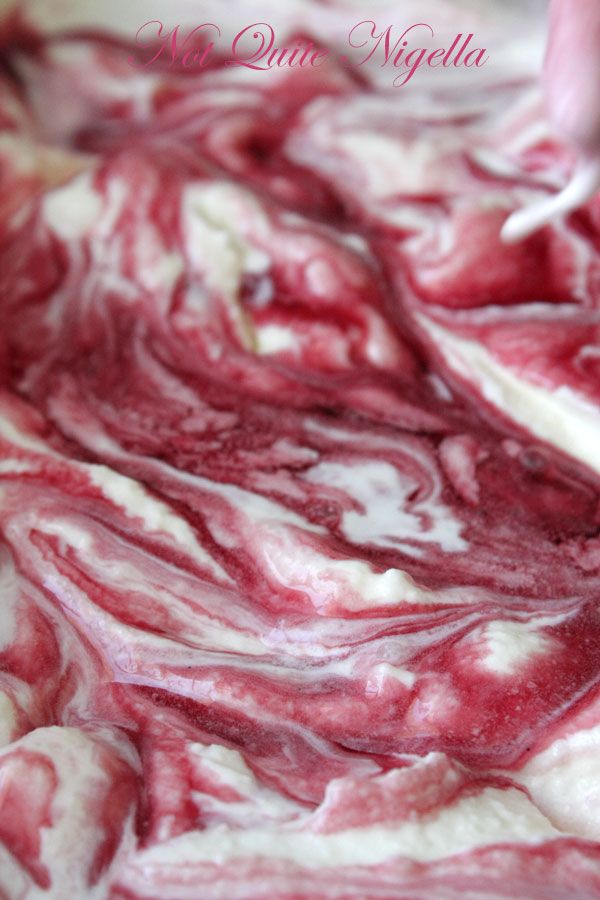 The resulting ice cream is luscious. The Pomegranate syrup is divine and the combination with the vanilla reminds me so much of the Twister ice cream. If anything I might add some sweetened passionfruit puree to truly recreate it. That is, if there's any left after my husband scoops himself as much as his hungry heart desires. 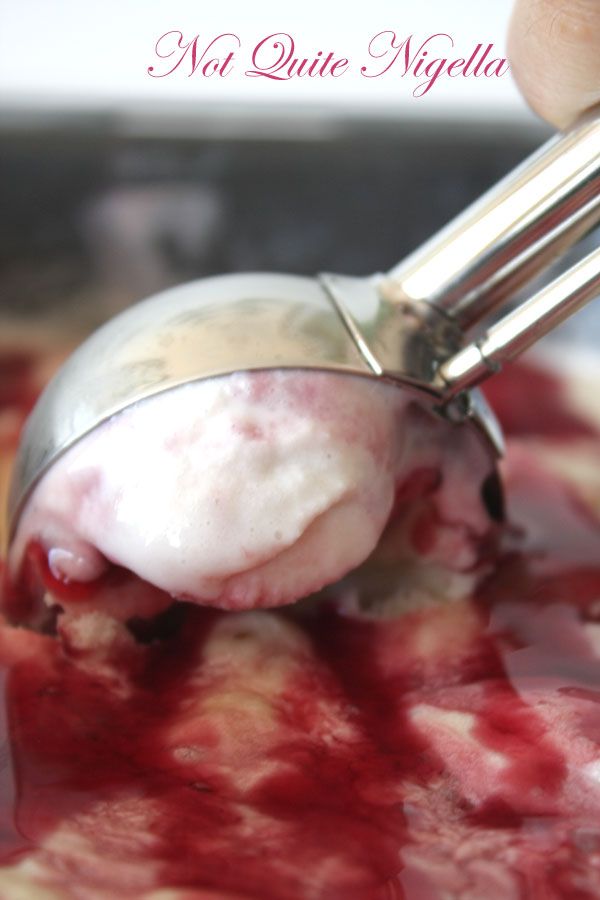 Step 1 - Firstly make syrup. Put POM Wonderful juice in a small saucepan with sugar and boil on medium/high heat until reduced by half (about 7-10 minutes). Cool well (you don't want this even slightly warm).

Step 2 - In a bowl, whisk the cream, milk, sugar and vanilla until the sugar has dissolved. Then place in ice cream maker and churn according to directions.

Step 3 - Place ice cream in a freezer proof container or cake tin and then spoon over half of the Pomegranate syrup. Using a chopstick or a blunt knife make swirls with the syrup. You don't quite want to invoke Jackson Pollock by splattering the syrup about. Freeze until firm and serve with some extra syrup doused on top and some Pomegranate seeds if you see fit. 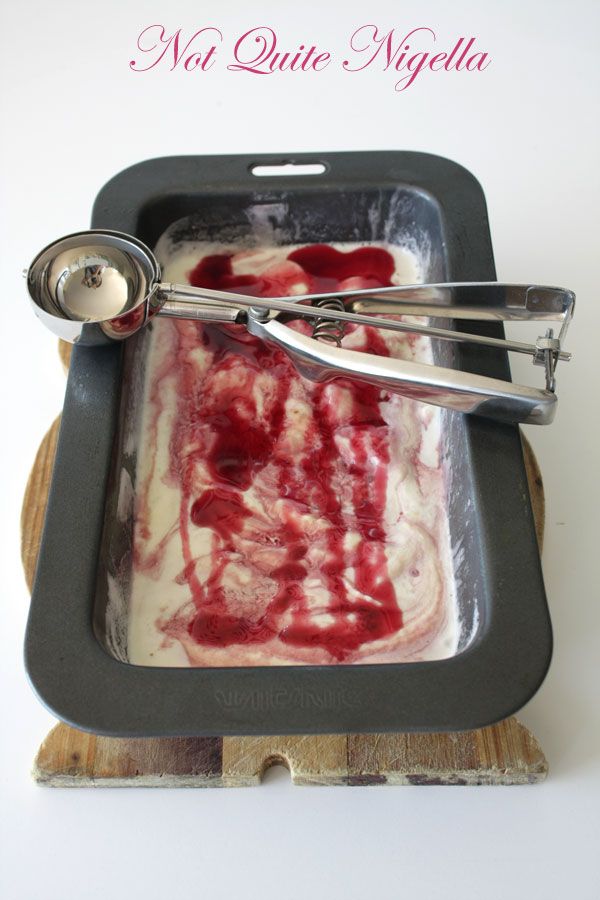