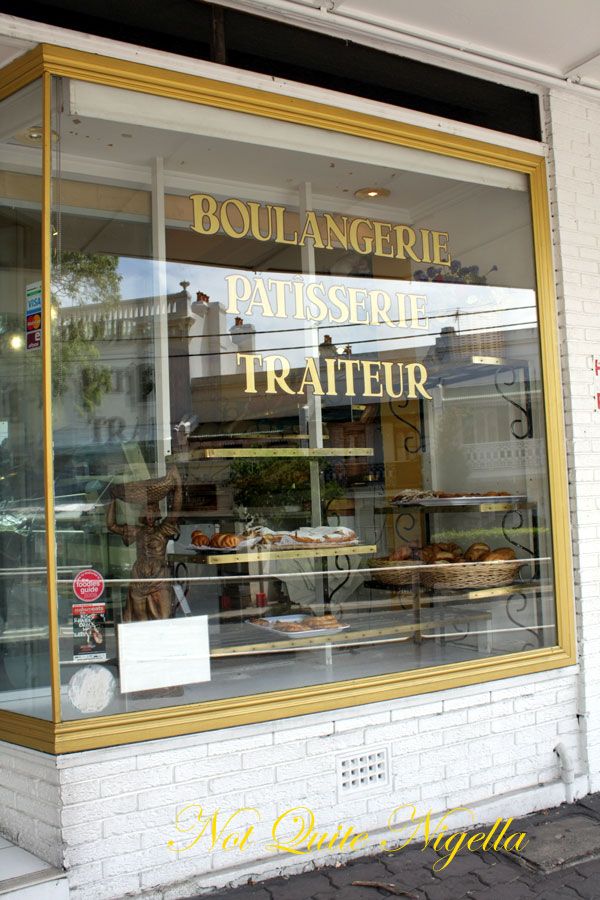 It seems that we're out of luck today when we walk into La Gerbe D'Or, Paddington. The chef de partie has just left so we can't get any cooked food, only what is in the display cases. Owner for 24 years Frank Francois is also missing in action. Ok so out of luck is probably incorrect. I'm still looking at some delicious quiches and pies as well as rillettes and terrines, baguettes and cakes galore. I'm lunching today with Teena and baby Annabel Ines who has decided to be an angel and sleep. 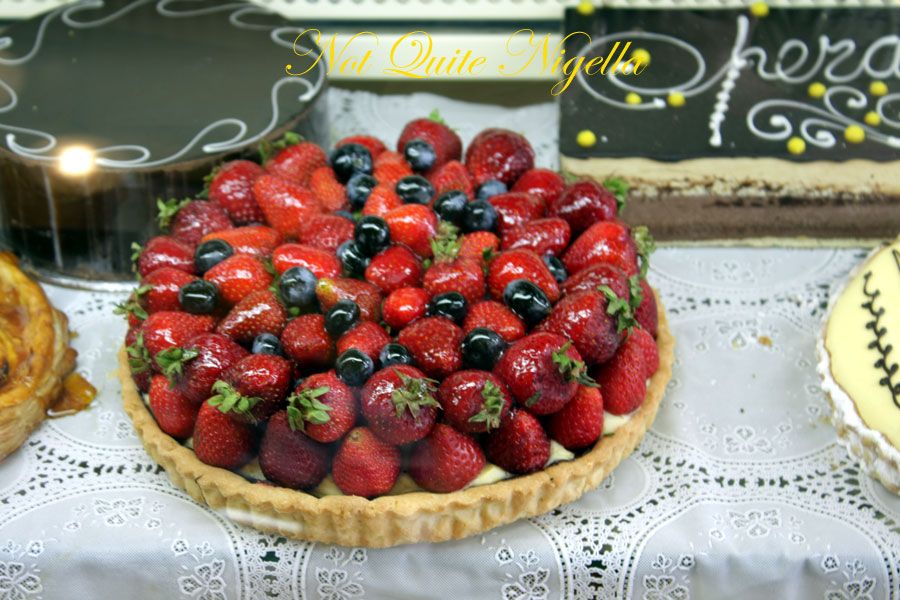 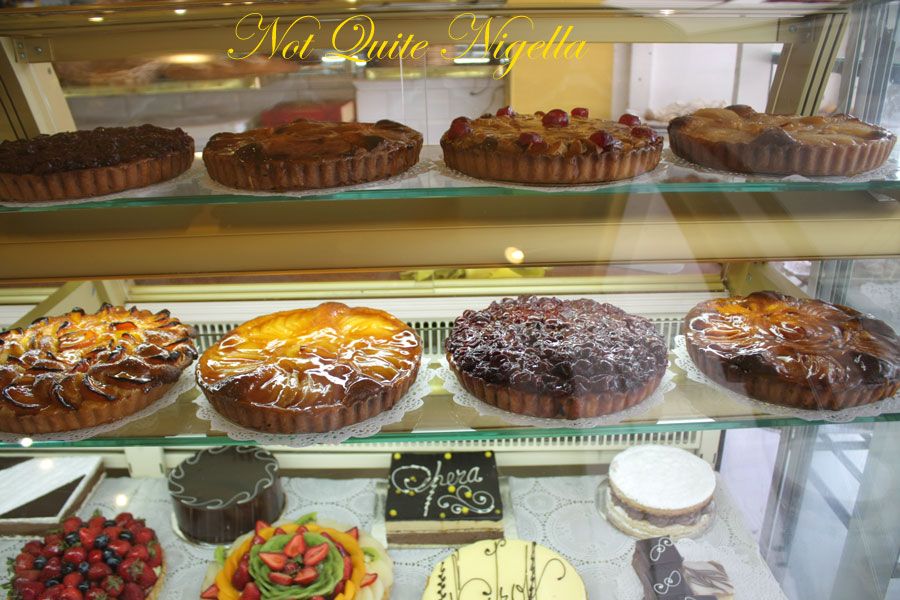 It's swelteringly hot inside even with the gigantic fan being deceptively ineffective so we brave the relative coolness of the outside chairs with a semblance of a breeze. We order some of the Terrine de Canard (Duck Terrine),  Rillette du Porc (pork rillette) with some baguette slices and a Pissaladiere. We'd decide on sweets a bit later. 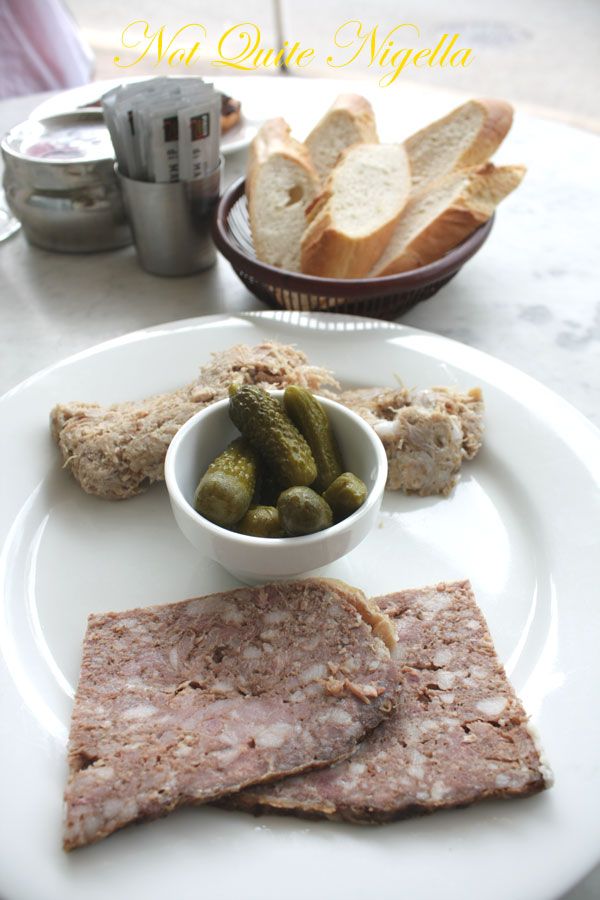 The Rillette du Porc is delicious, a mildly flavoured soft mix of shredded pork meat and melting fat and is a pleasure to spread on the fresh baguette. The Terrine de Canard is strongly flavoured with dark duck meat with a cognac flavour to it. Both are delicious and I can imagine buying slices of both to take home. 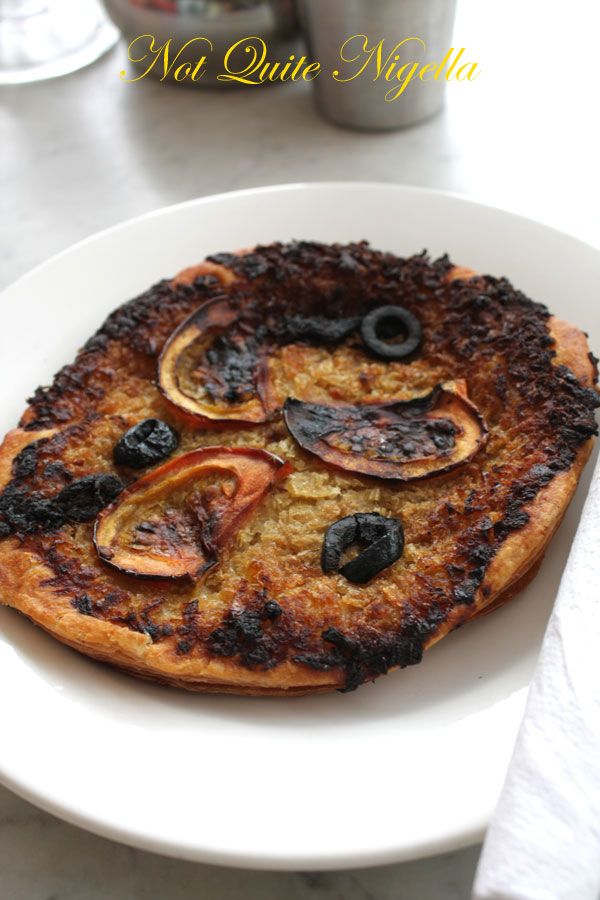 The Pissaladiere has seen better days. The pastry is chewy and has separated into two layers. We only taste anchovy in one bite and despite the burnt appearance of the topping, the occasional olive and caramelised onion pieces are quite tasty. 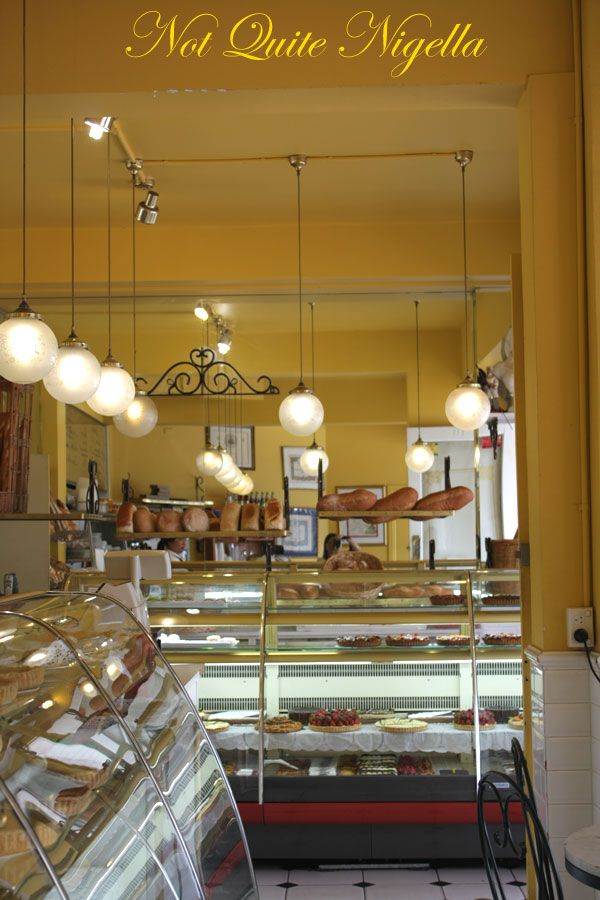 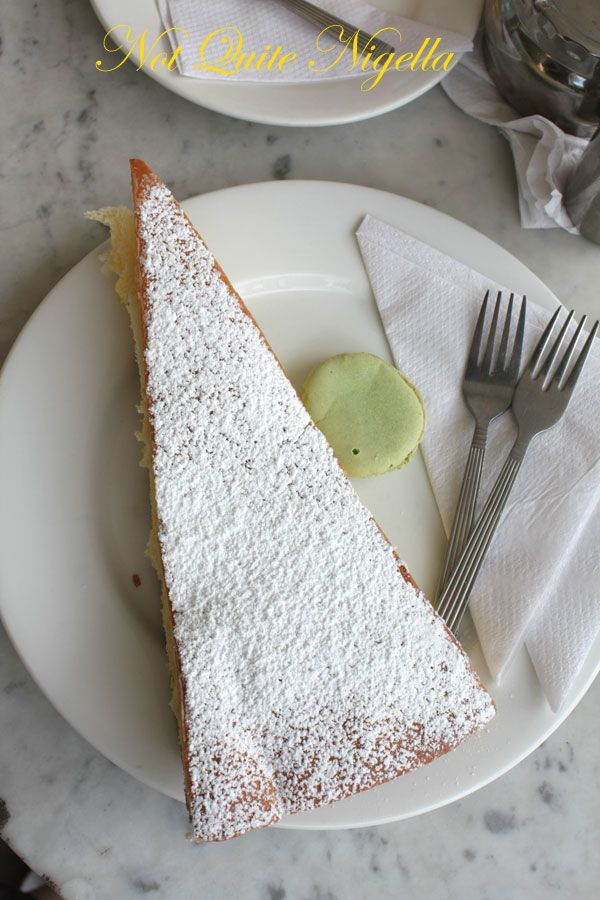 The LaTarte Tropézienne, described by some as a giant custard hamburger (a term that would probably horrify many), is enormous measuring about 25-30cms from end to end. The bread is a sweet brioche and the custard is a similar thick custard, much like the Mille Feuille custard and it is dusted with icing sugar. It's fresh and soft and despite our fullness and the size we make good headway into this. 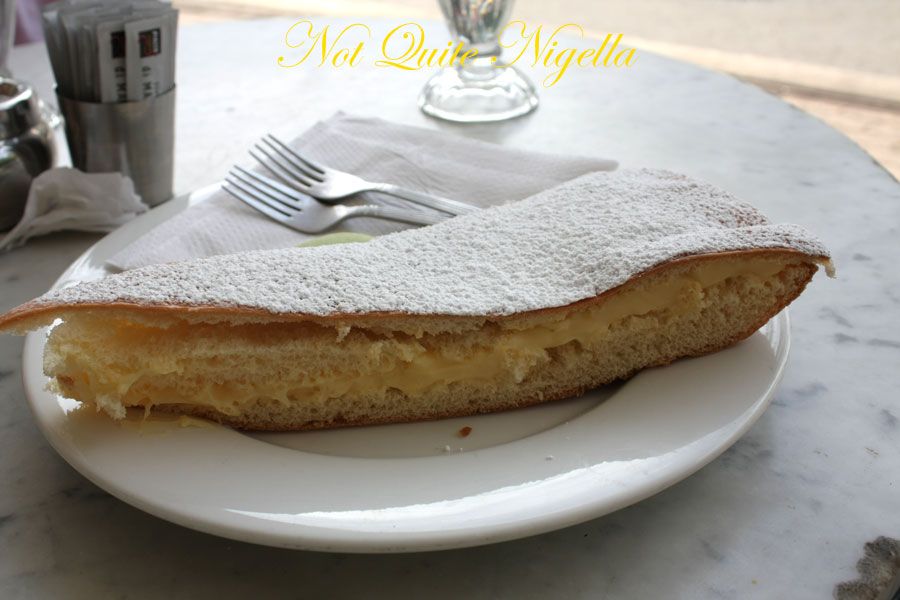 Sideways look at the St Tropez

The pistachio macaron is another matter though. Dry as the desert and bereft of anything but the lightest smear of filling it barely resembles a macaron. Teena and I are both seasoned macaron eaters and this is pushed away after one bite. 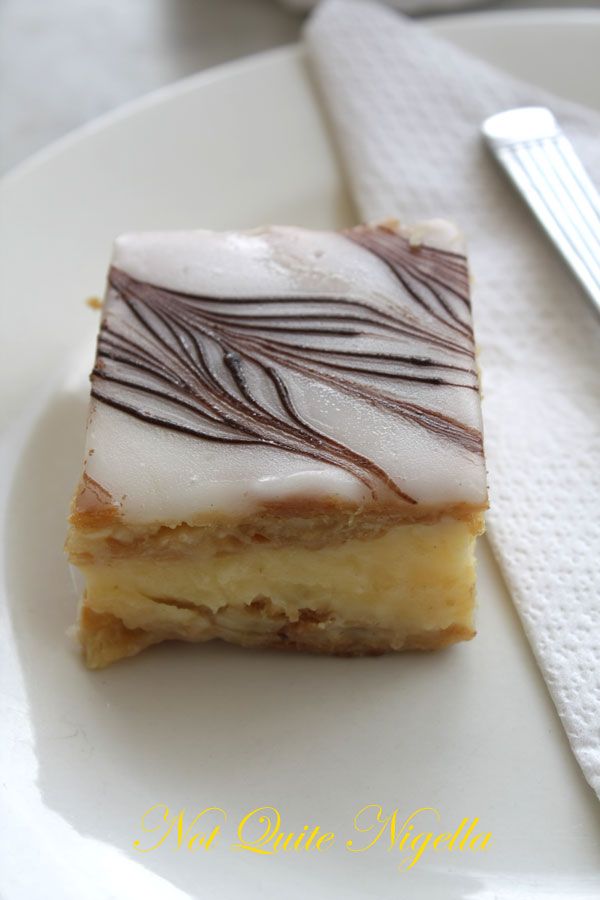 The petit four size Mille Feuille is delicious, the oozey soft custard and crisp pastry and sweet icing combining perfectly as Mille Feuille does when done right. It's a bit on the expensive side considering it's a third or half the size of a regular Mille Feuille although I wonder if the Macaron was $5.70 instead? Surely not. 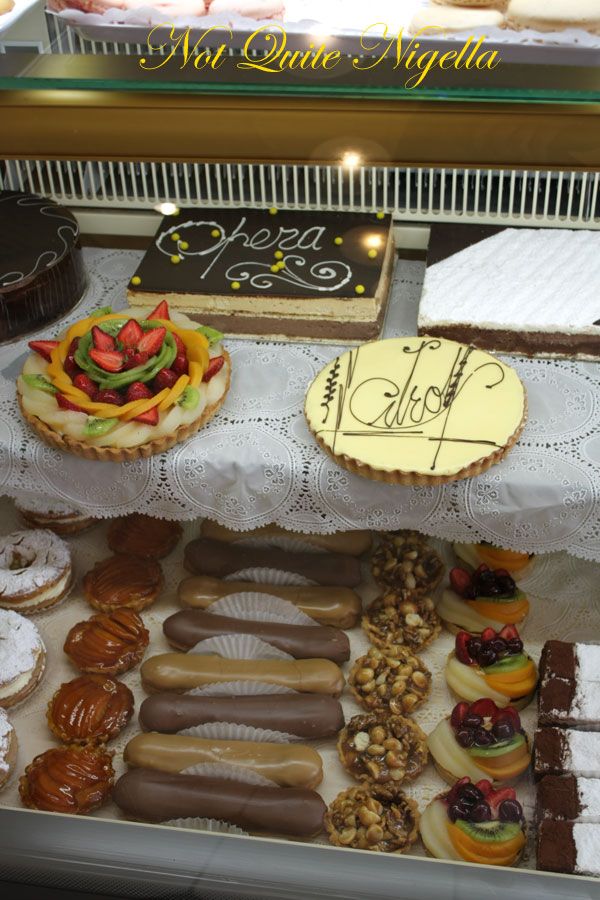 Perhaps it's because the owner is away, but I am always willing to go back in the name of research. 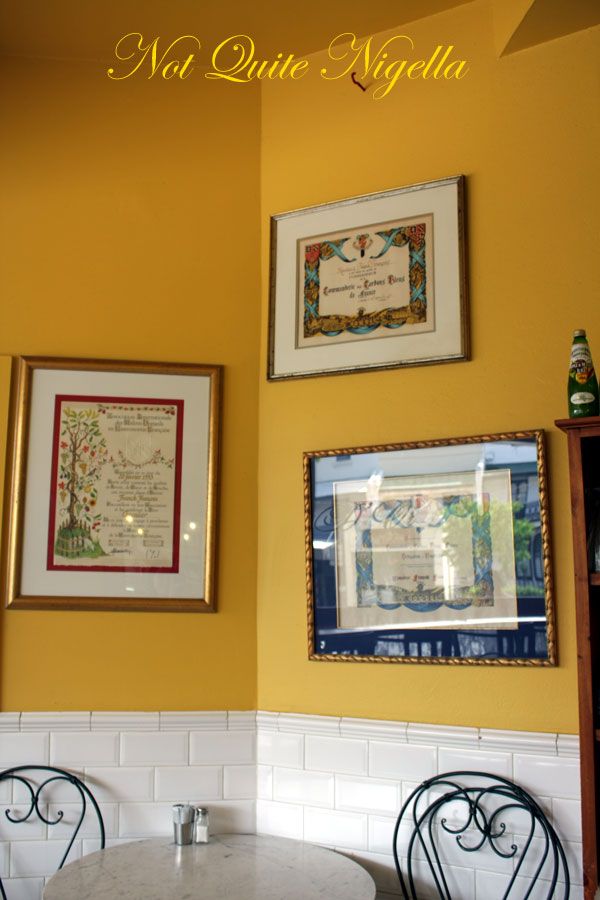 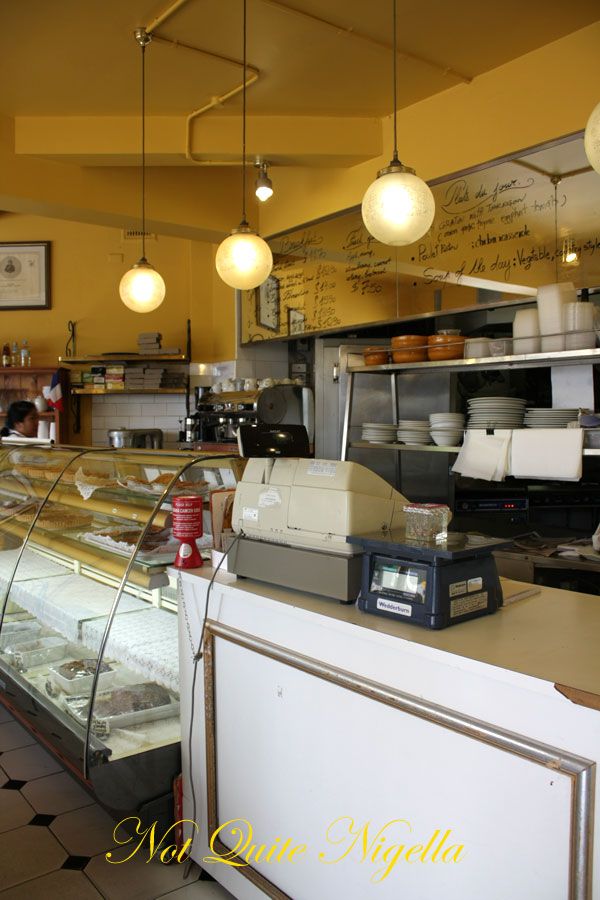