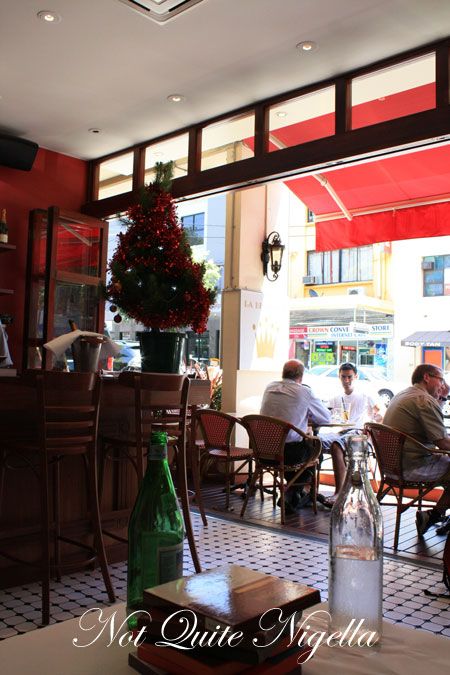 My parents always taught me that when looking for good food from a particular country, ask the people native to the country. Better still, when you walk into the restaurant and it's filled with these people, you know you've chosen the right place. When Mr NQN and I went to Myriam's place for dinner we asked her, her fiance and her French friends where they thought had good French food in Sydney. The answer was unanimous: La Brasserie in Darlinghurst. 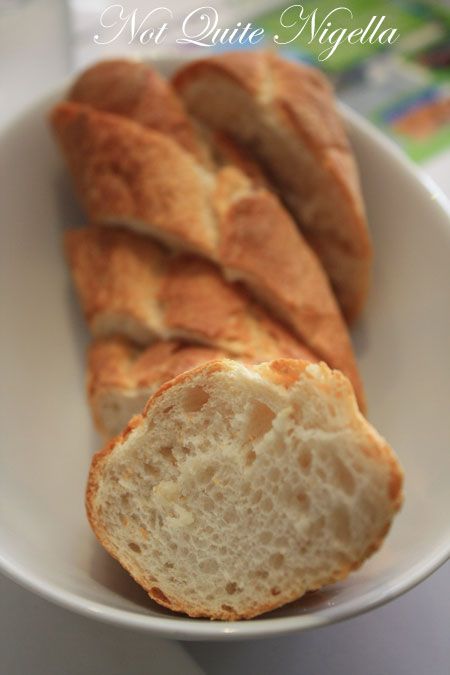 Down the William Street end of Crown Street which is more Woolloomooloo than Darlinghurst really, La Brasserie is a French style Bistro that has been open for 3 years. The bread is a great start, fresh and soft inside with a spiky crunch on the outside it's paired with some delicious French butter. And French butter has got to be my weakness, how much do I love thee... 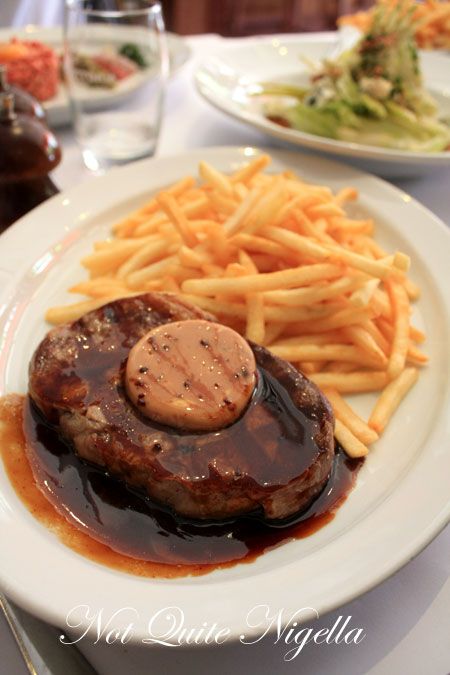 I order the Entrecôte which is one of my favourite dishes. Here it's a 120 day aged & grain fed Rockdale scotch fillet (250g), sauce marchand de vins and a large expanse of French fries. The disc of foie gras melts on top of it and gives it a gorgeously rich flavour. The meat is fairly tender with a few gristly bits on one side but it's a huge serve and I just cannot finish it. The fries are beautifully crisp and crunchy. 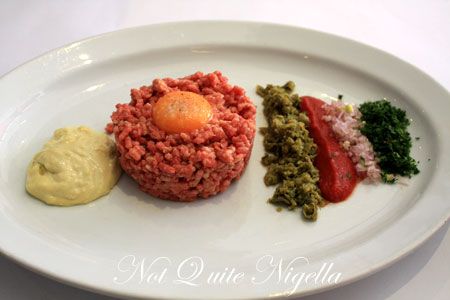 Benoit's Steak Tartare is a pretty picture indeed-until of course you mix it around and it looks less appealing. So let me show you a "before" photograph. It's raw ground Rockdale scotch fillet with cornichons, capers, raw egg, shallots, tomato fondue, aioli and a side plate of French fries. I try some of this as I am a big Steak Tartare fan if done well and this is very good despite Benoit's warning that he has gone too heavy handed on the Tabasco. 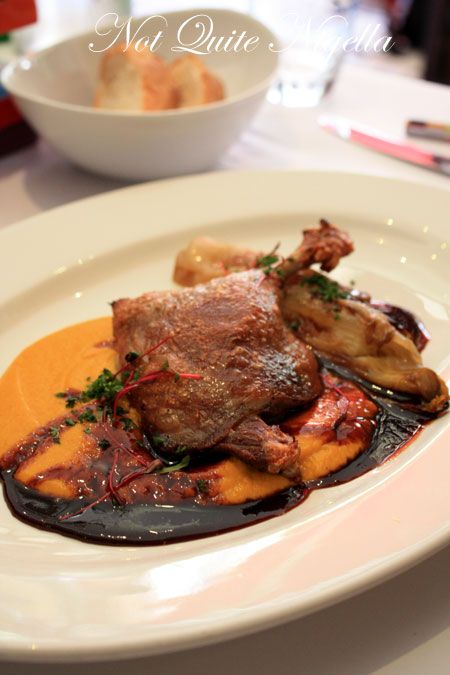 I don't try any of Camilla's Confit de Canard which is a crisp Maryland duck confit with carrot cumin purée, orange glazed endive & sauce bigarade (orange sauce) but it does look rather good indeed. 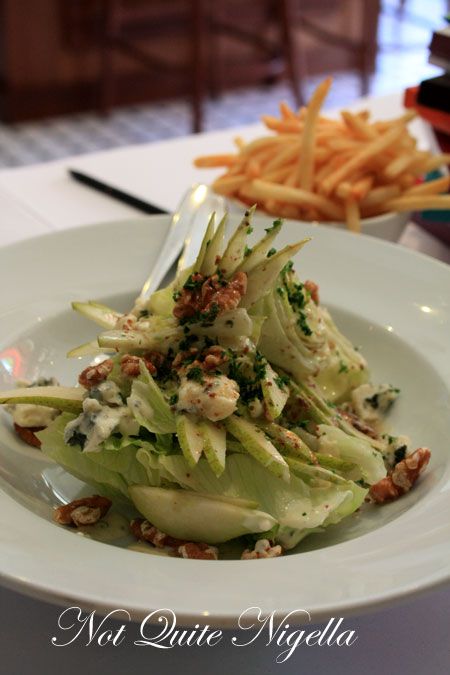 The Roquefort, iceberg and pear salad with large chunks of walnuts is delicious with just right amount of creamy Roquefort. 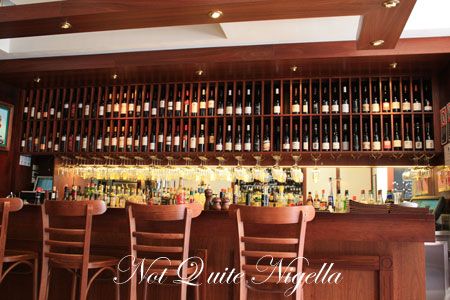 "Would you like to see the dessert menu?" we are asked and the answer is of course a yes, if only for a quick peek of course ;) 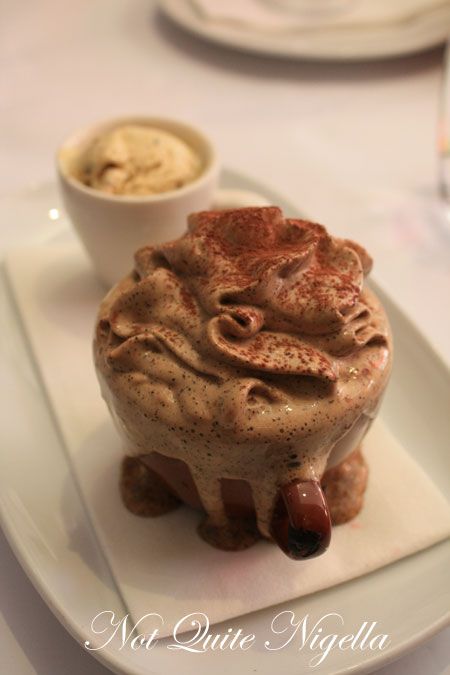 Although I don't usually have chocolate desserts after a large meal, I always tend to pick a fondant as I've never had success making them at home (they're always over or undercooked). This dark chocolate fondant is served in a cup thus eliminating any turnout anxiety although there isn't any of the gooey ooze. It is topped with coffee cream and accompanied with pistachio ice cream which is nice and crunchy from real toasted pistachios (not that bizarre pistachio paste that some places use that tastes like almond paste). 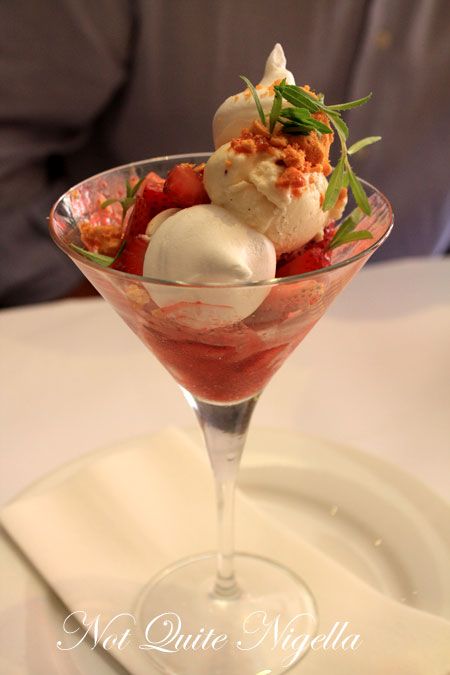 I didn't try any of Benoit's Vacherin aux fraises which was marinated strawberries, meringue, chantilly & honeycomb but it looked rather spectacular. 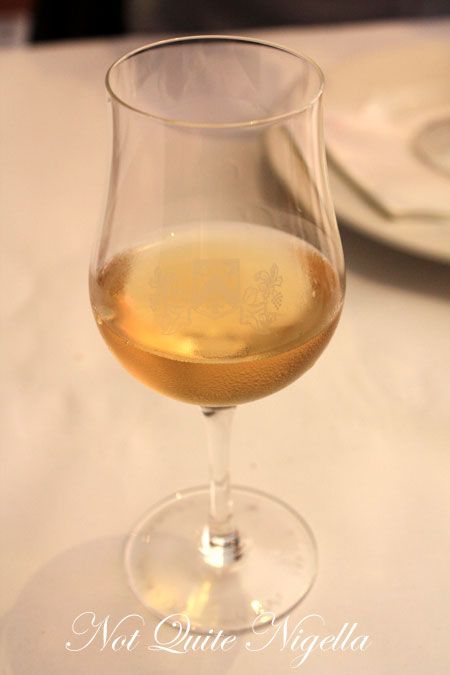 Compliments of the house was a lovely dessert wine which was eagerly sipped before I resignedly trudged back to the waiting, blinking cursor of my computer.

So tell me Dear Reader, are you a fan of raw dishes like steak tartare and sashimi?