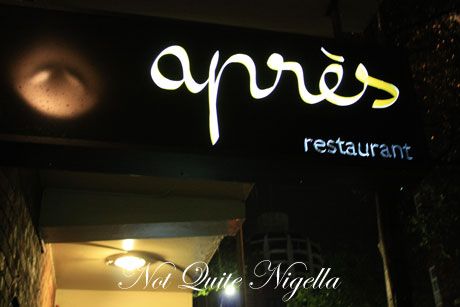 Christie and I are a touch frightened. It's raining and there's a note under the windscreen wiper. We've just attended the opening of the new Essential Ingredient store in Rozelle and we were just about to find somewhere around here to eat when we go to feed the parking meter and find this note. It's wrapped in cling wrap and says "Wayne 04xxxxxxx Call me, Cute yellow car". It's so random and so doesn't make sense - we don't have a yellow car and there's no yellow car around. Because it's a sinister looking dark and stormy night, we abandon plans to eat locally and high tail it out of there wondering why and how someone cling wraps a note like that and sticks it under a windscreen wiper? And what kind of person carries around cling wrap? The kind that has human heads in their freezer? Yes, let's get out of here, we agree. 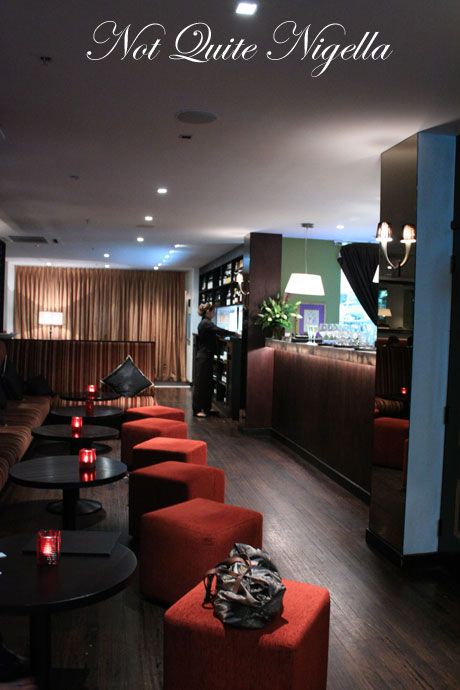 I check my book for places to eat. Apres jumps out at us although it is in busy 1 hour parking only Potts Point. We ring and ask whether at this lateish hour we can  secure a table and they tell us that the kitchen closes at 10pm but they'll keep it open until 10:15pm if we just want one plate. Done. We arrive and by some miracle find a park and arrive. It's in a gorgeous Art Deco style building with ruby shaded velvet boothed seating. The manager is friendly and leads us to our table. When he asks us what we've been doing that evening thus far we tell him and he remarks how their sister place La Grand Bouffe is near there. Doh! Except that we did want to leave the area pronto of course in case a human head hunter was after us. There is a 3 course set menu but we're not hungry enough for that and we're too late for that. Entrees are $18.50, mains are $29.50 and desserts $14.50. 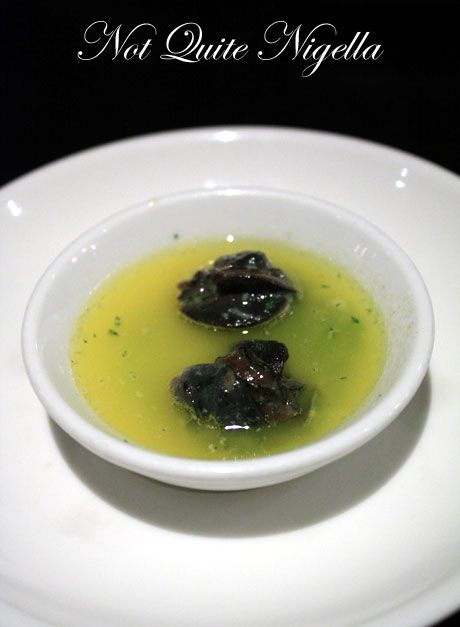 Escargot or snails are absolutely divine, mostly for the garlic butter that they sit in and this is among one of the nicest ones I've had as the garlic butter is well seasoned and salty with a strong garlic and parsley flavour. We ask for more baguette to dip in the butter. 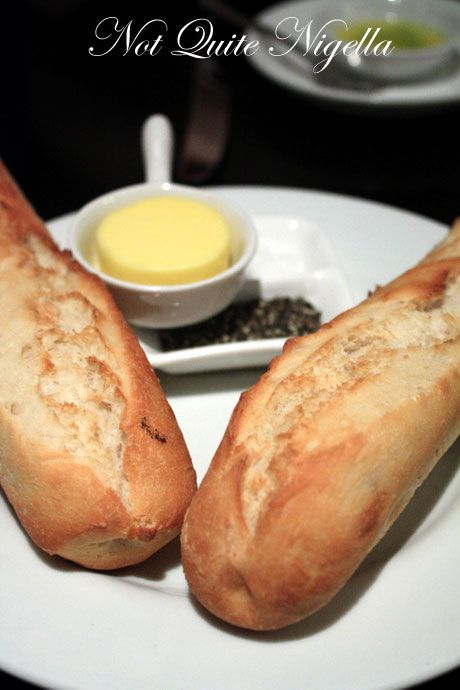 Despite how large it is, we are glad that we ordered the baguette as it is served warm, with a square of butter. Dipping it into the butter we're reduced to moaning. Few things can satisfy like simple bread and butter. 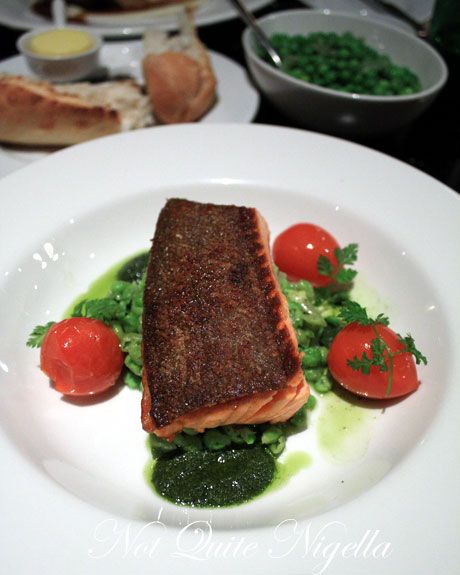 We've just opted for two mains tonight. Christie has the Fish of the day which is Ocean Trout. The skin is wonderfully crispy with the fish underneath silky and smooth and moist underneath. They're out of crushed potatoes so they use lemon scented peas instead and there is some pesto to flavour it. 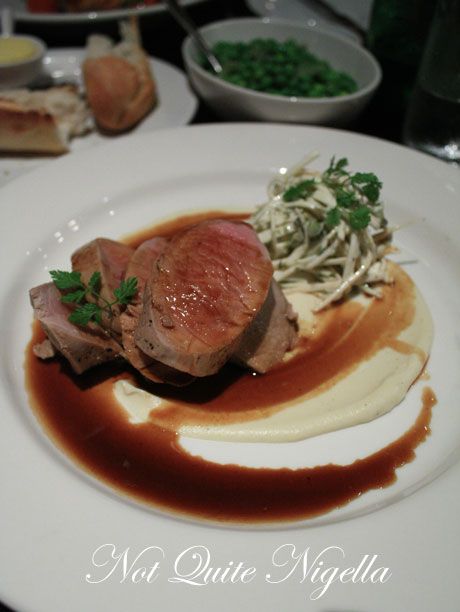 I ordered this on the waiter's recommendation. I didn't want anything heavy so he suggested this. The pork is poached which gives it an altogether very different taste and texture and it is slightly pink in the middle. It's served with a celeriac remoulade, a streak of cauliflower puree and a jus gras which is a jus made from the juices from roast chicken with veal and chicken stock. The pork is remarkably tender and the dish is quite rich but delicious with the tender pork, creamy remoulade and cauliflower and flavoursome jus combining well. 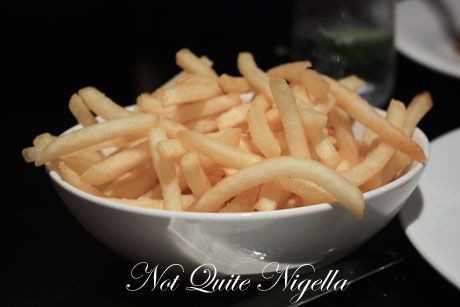 I can never say no to French Fries and these are moreish "We really shouldn't eat all of these" we say to each other taking one after another and nodding in agreement "Mmm yes we really shouldn't". 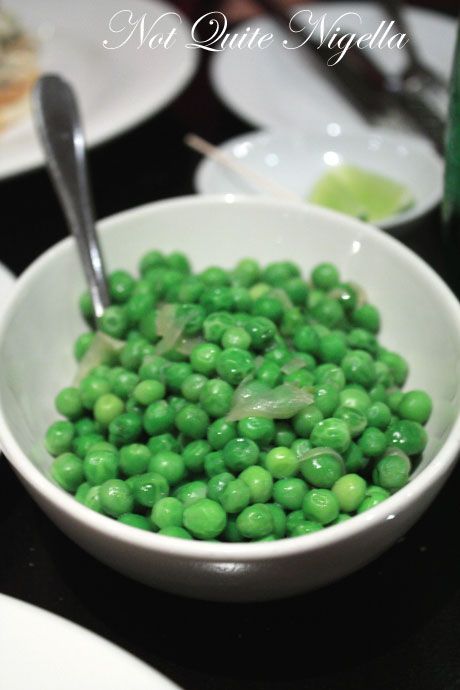 I had no hope of finishing these as Christie already had peas on her plate. We both adore peas but there is just no way we can finish this side of peas which are sauteed with onions although they are delicious and pop in the mouth.

Stuffed to the brim, we run to the car under the persistent drops  of rain silently praying that there are no cling wrapped notes under the windscreen wiper.

So tell me Dear Reader, have you ever received a strange note or encountered anyone that has frightened you?

And in some exciting news, I was recently interviewed in the new Nine To Five magazine! 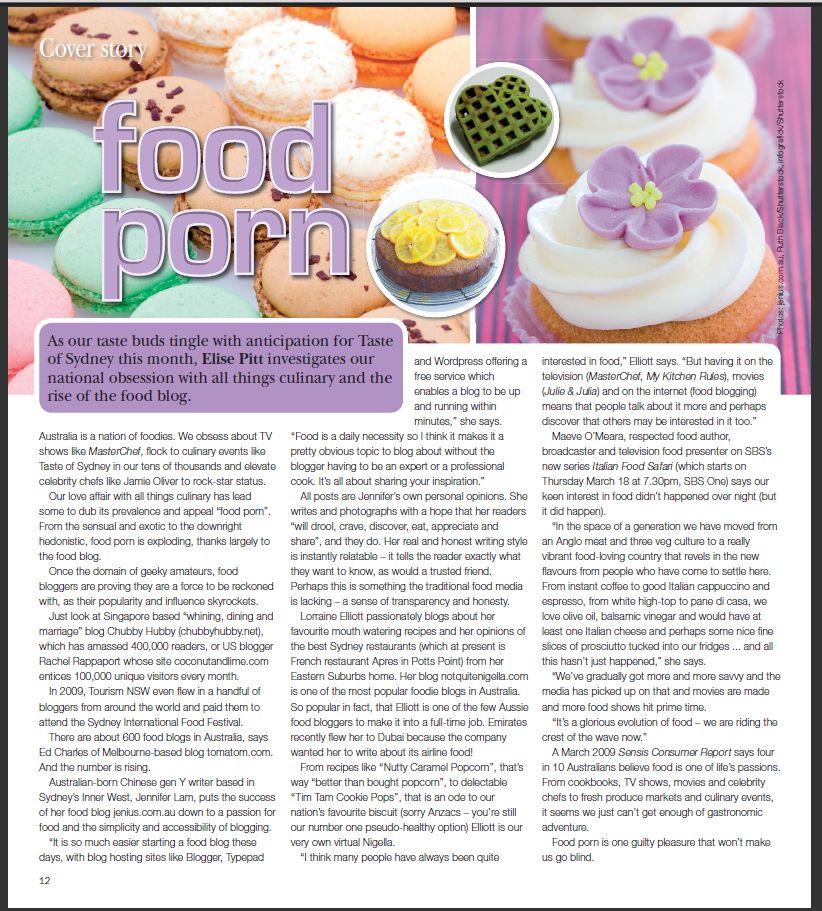 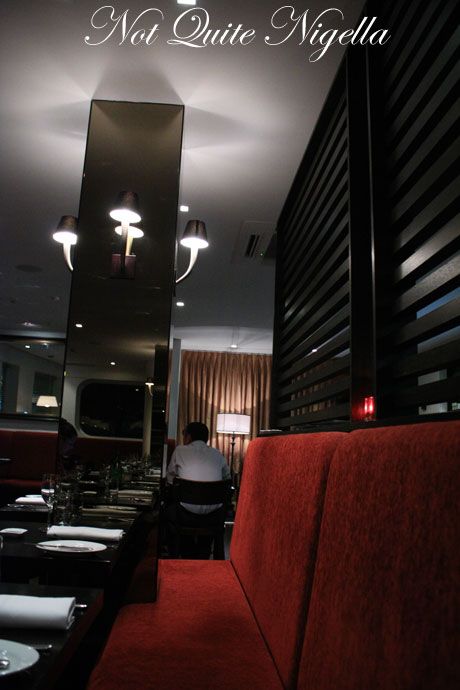