Look at what the Postman brought me...

Over the past week or two samples have been arriving of some very yummy goodies. Somehow, unwittingly they all coincided with my birthday which happened to be yesterday so I just took it to mean that they were birthday presents. Do you like my logic? 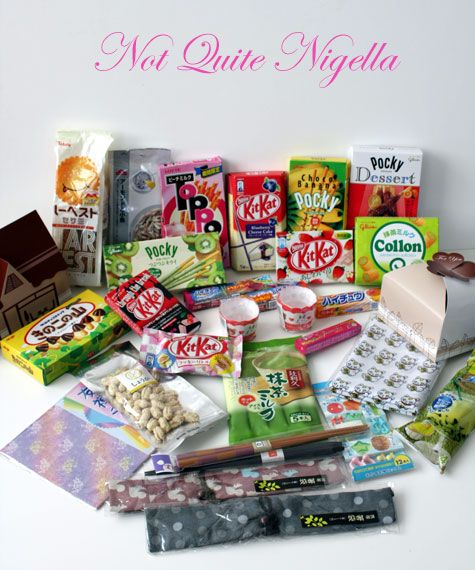 I just want to say a huge thankyou to my friend Angela from Creating A Stir who sent me a most amazing package all the way from Japan. She knows I have a love for Pocky and Japanese Kit Kats as well as all other things quirky and Japanese so she sent me a mind blowing selection of food including: Kits Kats (in blueberry cheesecake, cherry and strawberry as well as an intriguing little packet of little kit kat balls); Pocky (in kiwifruit, coco banana, double dessert chocolate, and peach milk), adorable cake boxes, delicious sesame crackers, bento art toothpicks (I can definitely see myself getting into bento art); ginger peanuts; a moreish almond and fish snack; mushroom chocolate biscuits; Collon cookies in milky green tea; cupcake wrappers, chewing gum (including a dragonfruit and blood orange flavour! :o ), gorgeous origami paper, pretty chopsticks and  chopstick covers and green tea jelly snacks. 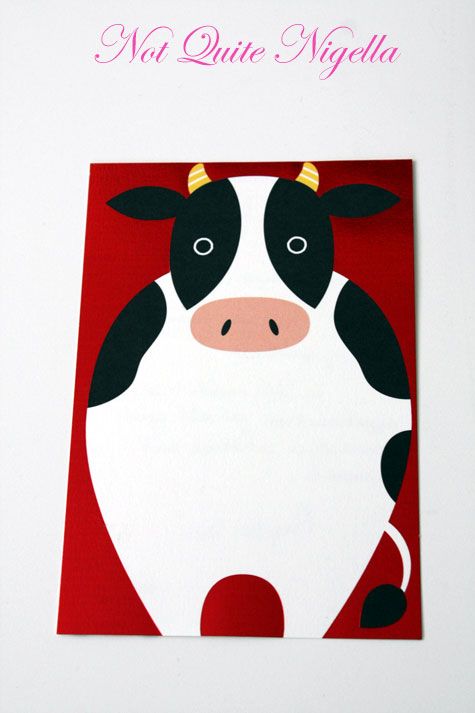 The first to get eaten were the Blueberry Cheesecake Kit Kats which are amazing-with an eerily accurate blueberry cheesecake flavour. Next were the rest of it including the Kiwifruit Pocky (fabulous). In fact everything in there was an absolute delight. She has great taste that Angela-thankyou again ;) 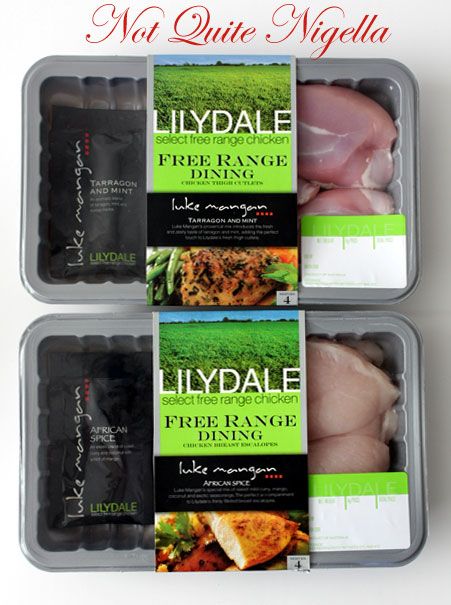 I also received some packs from the Lilydale Free range chicken range with Luke Mangan (of Glass restaurant fame). I was given a African Spice Breast Escalopes and Tarragon and Mint Thigh Cutlets. Flipping the packs over I saw that the African Spice Breast Escalopes only had a cooking time of 20 minutes for the entire meal so I saved it for when I was time poor and needed a quick dinner-the ultimate test. Escalopes are part of the breast of the chicken, pounded until thin and therefore quick to cook. I quite like chicken breast but my husband and parents don't, always saying that it is too dry but I was willing to give this a go. Besides which there were 8 escalopes here so for the two of us there was quite a bit of meat and the calorie count per serve was pleasantly low at 585kj per 2 escalopes (yay!).

I made the requisite tomato salsa (substituting coriander for mint as that was all I had-it's meant to be easy remember) and couscous and pan fried the escalopes after sprinkling them with the flavour sachet and oil. All up it took me about 30 minutes to cook with all of the chopping and preparation-you might be able to do it in 20 minutes but it would be a furious and fraught 20 minutes and you may lose a finger with the whole chopping part. 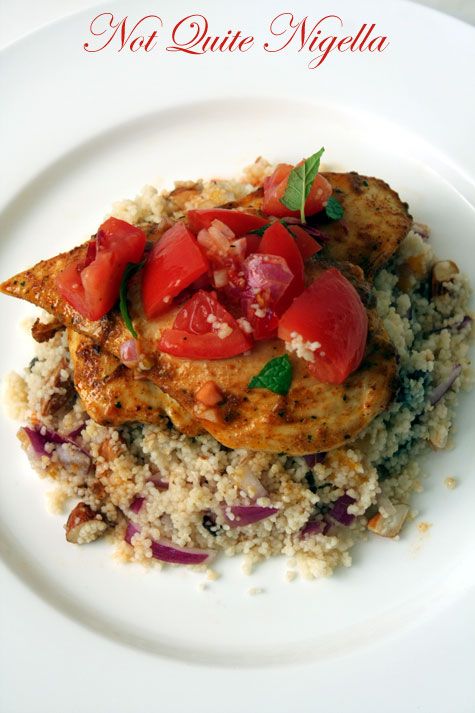 I took a bite of the chicken and they were juicy and tender and totally scoffable - I almost thought that it was a juicy thigh fillet. I greedily ate it happy in the knowledge that it was low in calories. For those that don't like any additives, the dry marinade sachet for the escalopes reads a little like a cup a soup label so just keep that in mind but the other pack is just herbs. You can always buy the escalopes and make your own although the zero marinating time was good for me and I can definitely see myself buying these again. A pack of the escalopes is $11.40 per tray and the thigh fillets are $9 per tray from Coles. We did try the Tarragon and Mint thigh fillets but definitely preferred the African spice escalopes instead.

As for the rest of the escalopes? Apart from having them for dinner tonight, I'll use these in a salad for lunch or in a sandwich (these are best and juiciest straight off the pan rather than reheated). And share them grudgingly. 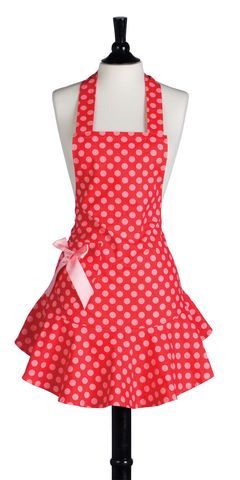 Keren from the Cupcake Courier was also kind enough to send me a Jessie Steele Josephine apron. Now the bit I didn't realise was that the Josephine is really flattering, as the straps are adjustable and the skirt part flounces out just like a dress! Apron as fashion? Yes please. I can't wait to see what else Keren comes up with-she has the Midas touch when it comes to picking things for her store! 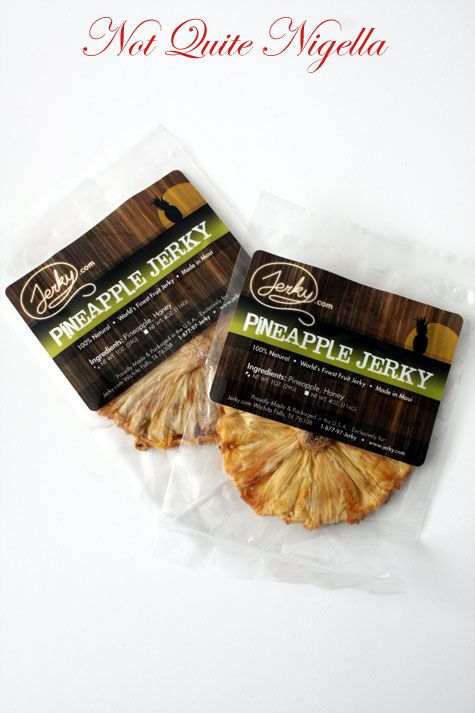 I also received some Pineapple Jerky from Jerky.com which unfortunately due to customs can't really be shipped to Australia. If you can get a hold of them do because they are actually delicious and a great snack (although they are moreish so beware!). Made in Maui of just pineapple and honey they're similar to the pineapple flowers I made before for cupcakes but even I can admit these are better as they are thicker. And because customs confiscated my haul, thanks to my buddy Christie for passing on some of hers to me! 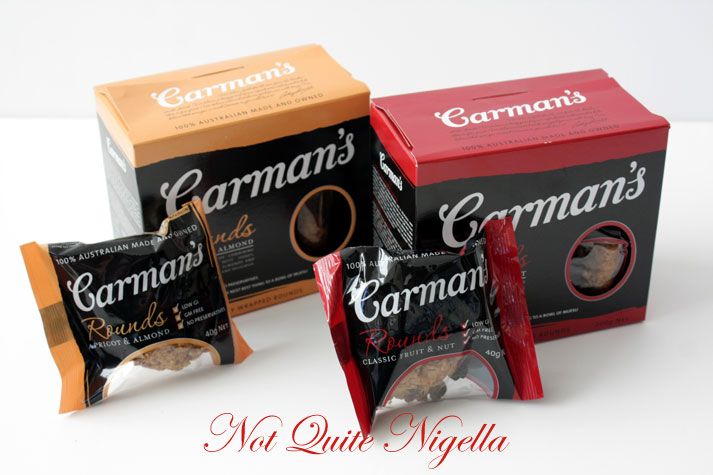 Carman's Muesli sent me some Muesli rounds which are said to be like a portable bowl of muesli in a Low GI form designed to ward off morning tea hunger pangs. Taste wise, I preferred the Classic Fruit and Nut to the Apricot and Almond although I confess I do prefer Carman's regular muesli bars for texture and taste. However in terms of GI rating, they're very good and the slow energy release does actually seem to help the mid morning cravings. They're available from Coles and Franklins for $4.99 for a 200g box of 5. 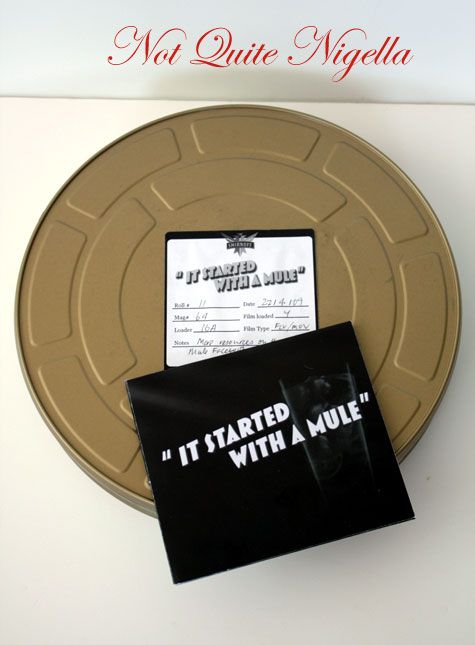 Another goodie I got was from Smirnoff to promote their It Started with a Mule campaign which came in a fabulous film canister which really got my attention. My package delivery guy asked me if I was in the movies-heh I wish! You can see their whole campaign here and read about the history of the Mule drink (which is delicious!). And because every birthday party deserves a cocktail, I followed the instructions and made one using Smirnoff, ginger beer and lime with ice and had a very Happy Birthday! Thanks to all the PR companies and brands that sent through the samples-it's great to see that bloggers are now being included in the media mix! 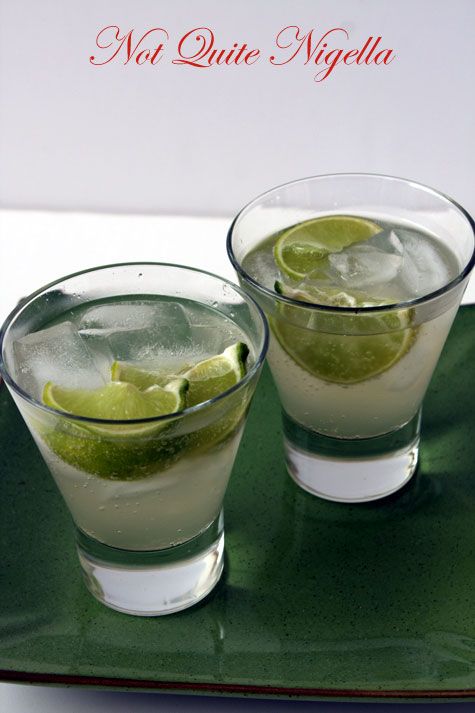 featureAnthony Bourdain, A Tribute
featureA Taste of Gaza And Reading Between The Soup With Laila El-Haddad
featureA Greek Feast with Costa of Costa's Garden Odyssey
feature12 MORE Things You Should Know About Food Bloggers
recipeSix Lunches, Six Women From Six Lives: What Do You Eat For Lunch? Pt 3
restaurantThe Secrets Behind Restaurant Design. How A Restaurant's Design Can Make You Stay Longer And Spend More
featureSix Lunches, Six People: What Do You Eat For Lunch?
featureHow Much Food Is Wasted? Behind The Scenes of Food Bank!
featureSo You Want To Be a Food Judge? Secrets & Lessons From A Food Judge
feature21 Fascinating Tips on Etiquette From A Royal Butler {That You May Be Doing Wrong!}