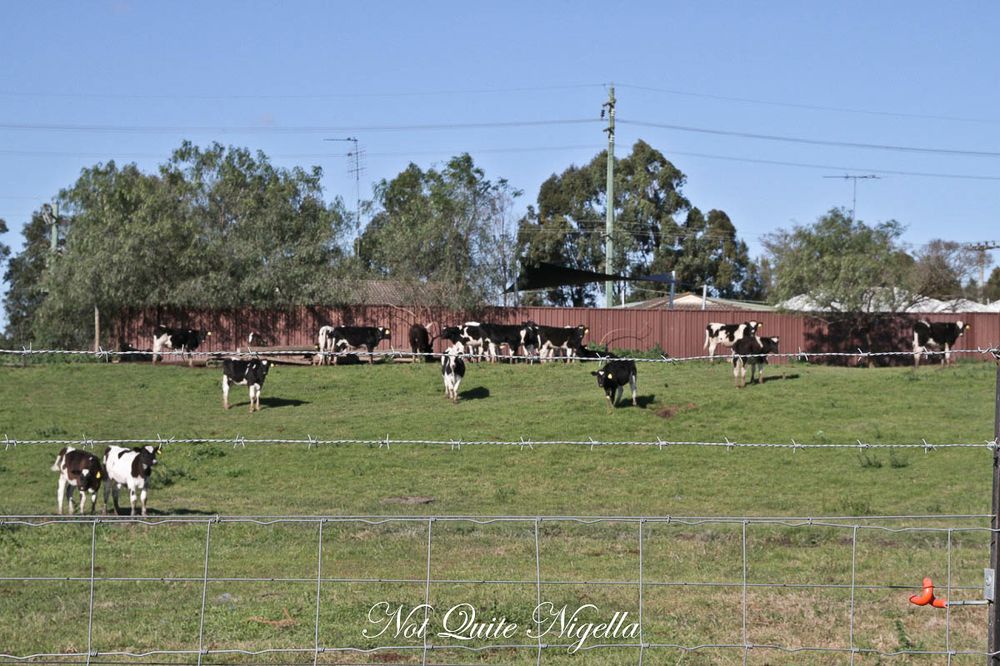 Dear Readers, this is an excerpt from my book that we had to cut but I thought would be good to put on the blog as unlike the two male prisons that I visited, I was permitted to take photographs.

It's a warm 21 degrees celsius in the unexpected Winter heat. The sun beats down and we have just driven past acres of pasture with cows grazing. Beyonce's "Single Ladies" plays in the background. I follow Fay, the petite food loving operations manager of food services into the dairy. This is no ordinary dairy though, this is the dairy for the NSW Corrective Services and supplies the dairy for all of the prisons in NSW and has been doing so for 20 years. Emu Plains is also a women only prison with about 210 inmates. 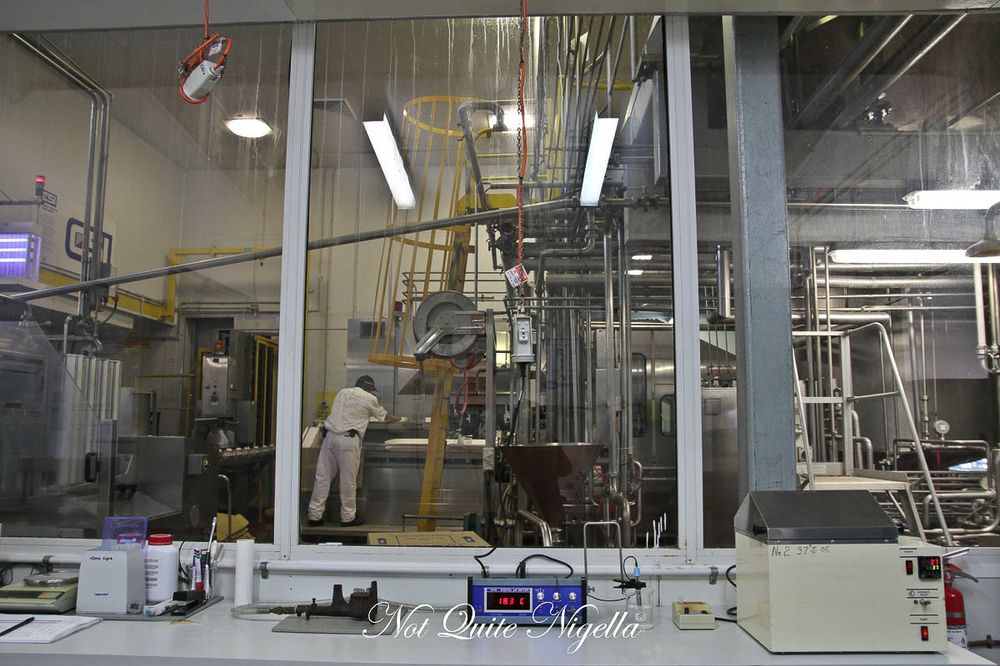 Here 70,000 x 300ml cartons, 10,000 x 600ml cartons and 1,500 x 1 litre cartons of milk are produced a day. Each male prisoner in NSW receives 300ml a day while each female prisoner receives 600ml a day. The 1 litre cartons produced are for staff. All milk is full fat although they are in the process of making a low fat version. They also make a dairy custard made here in a range of five flavours: vanilla, caramel, banana, strawberry and chocolate. These are destined for the inmate's desserts. 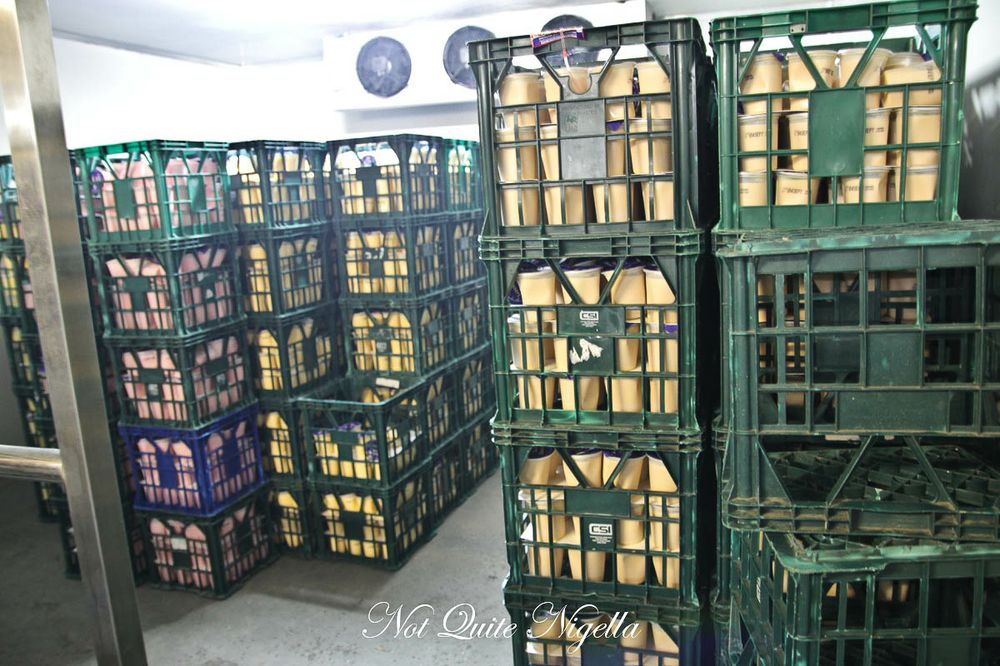 There are approximately 200 mostly Holstein cows here and one lone bull (Ebony) who supply them with milk with 5,000 litres a day. A cow can produce up to 50 litres a day and whilst the dairy is open from Monday to Friday, the farm is open 7 days a week as the cows must be milked every day or they will suffer from mastitis. The dairy is open from 6am-2pm every day and  it takes approximately two and a half hours to milk the cows. 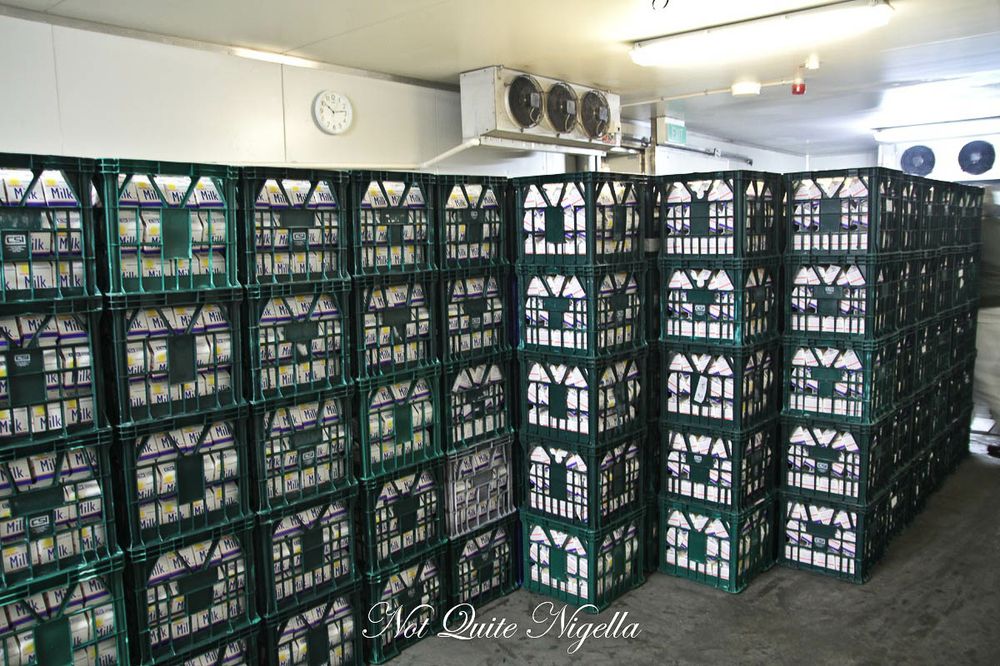 Neil who is in charge of the milking of the cows says that sometimes, particularly on cold days, some prisoners do not show up to milk the cows. If they fail to show up on two or more days, their pay is docked significantly to encourage their attendance. Mark says that for some the work proves a challenge. Some are quite low skilled so doing things like placing cups in a machine can prove a challenge and that they sometimes don't see when things are going wrong with the machines or processes. 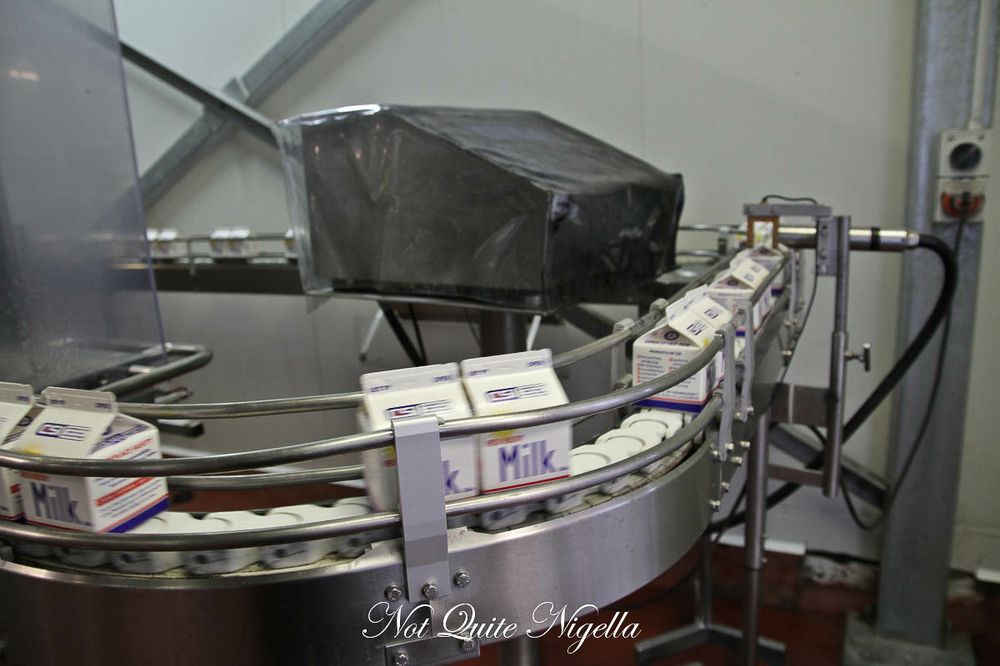 The officers here are trained chefs and there are at least two officers with the inmates. What is really interesting is that the dairy sits just outside the main prison and a prisoner could, if they felt the need walk out as there aren't any gates or barbed wire. I ask Fay what holds them in and she explains they don't escape because they have worked so hard to get to work at the dairy that to throw it away on an escape where they will inevitably be caught is not worth it. Here at Emu Plains, there are many prisoners that are towards the end of their sentences. Also the dairy allows them to earn money which they can send home. 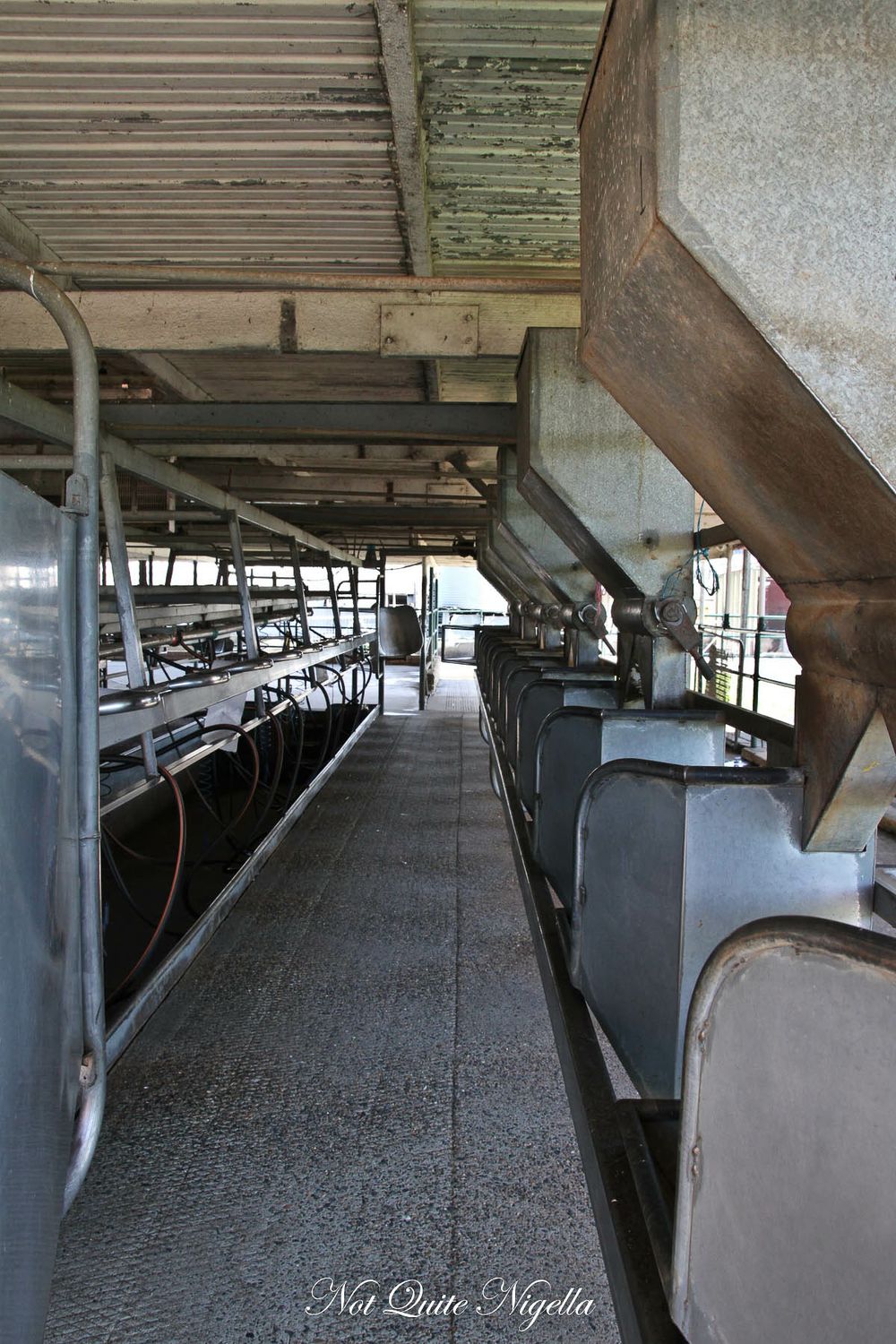 Once the cows are milked twice a day -and the cows know when to start heading back from the pasture to be milked, the milk goes into large vats. It is then pasteurized and homogenised and the milk put into cartons. These are then packed into crates by the inmates. They must wear hairnets and walk through foot baths before entering this room. 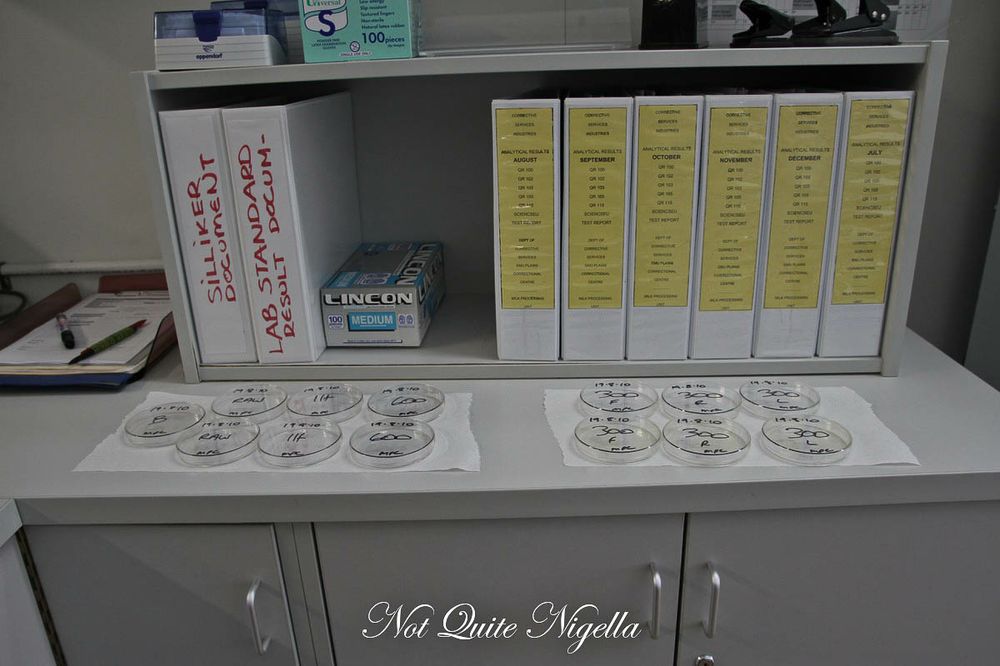 Samples of milk are tested for chloroforms and once a week the dairy is cleaned. They don't have listeria outbreaks here because of this as other larger dairies often operate 24 hours a day. The whole process from milking to delivery to the prisons in NSW means that milk can be in a prisoner's hands within 48 hours of the cow being milked. "Woman prisoners are better around the cows than male" Ron says gesturing with enormous hands. "They've go the right temperament." 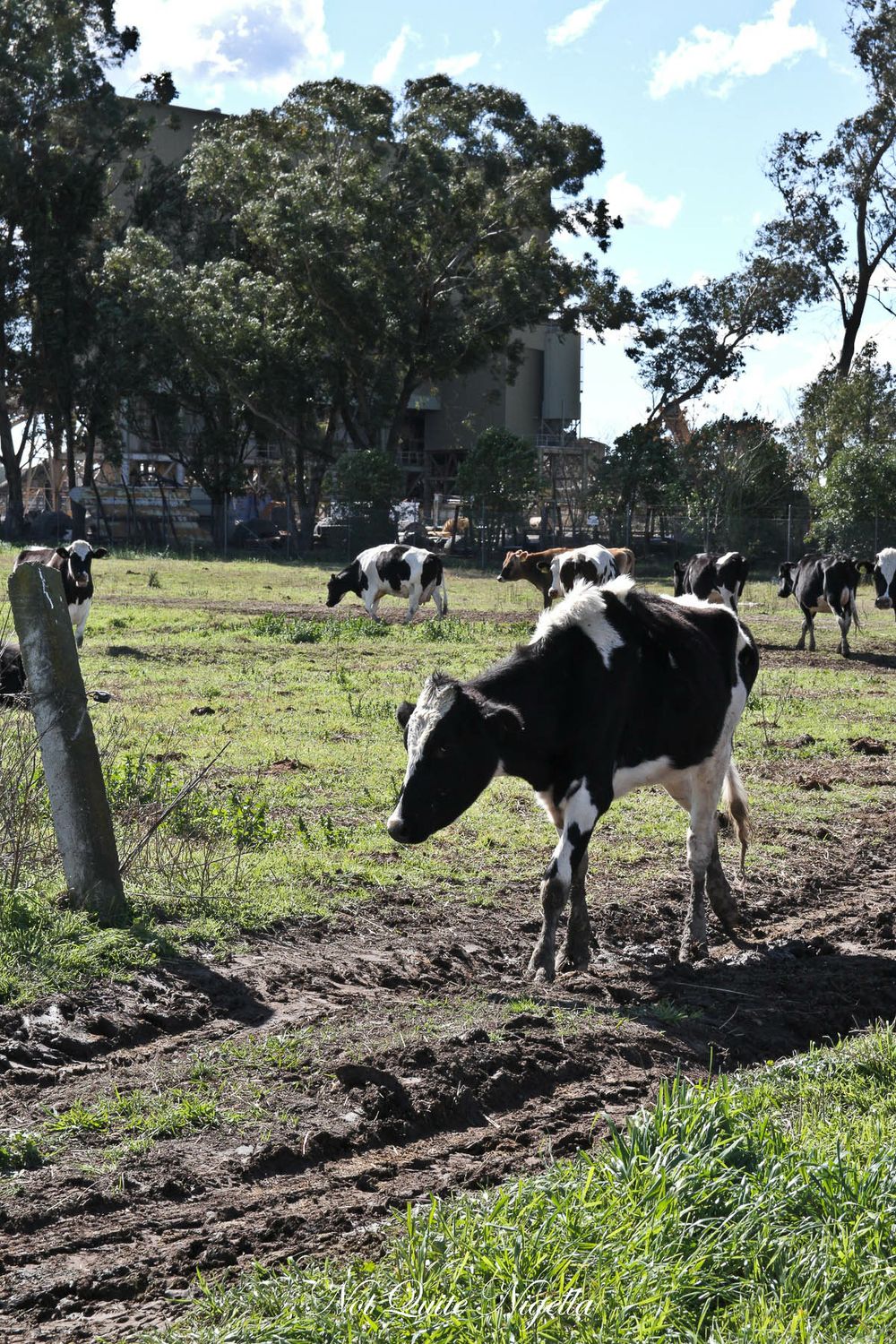 He finds that the female prisoners are different from the male prisoners in their attitude. Mark finds them less "in your face" and are therefore easier to deal with than the males who can get aggressive. The female prisoners are also much more family oriented and in some cases, they do have mother and daughters incarcerated at the same time. There are also second and third generation offenders. There are also houses where mothers can live with their children although this is controversial. Fay also has prisoners as her PAs. It's a privilege extended to those incarcerated for white collar crime to utilise their skills and keep them occupied. One of her current PAs is a university lecturer that with a drug related offence. 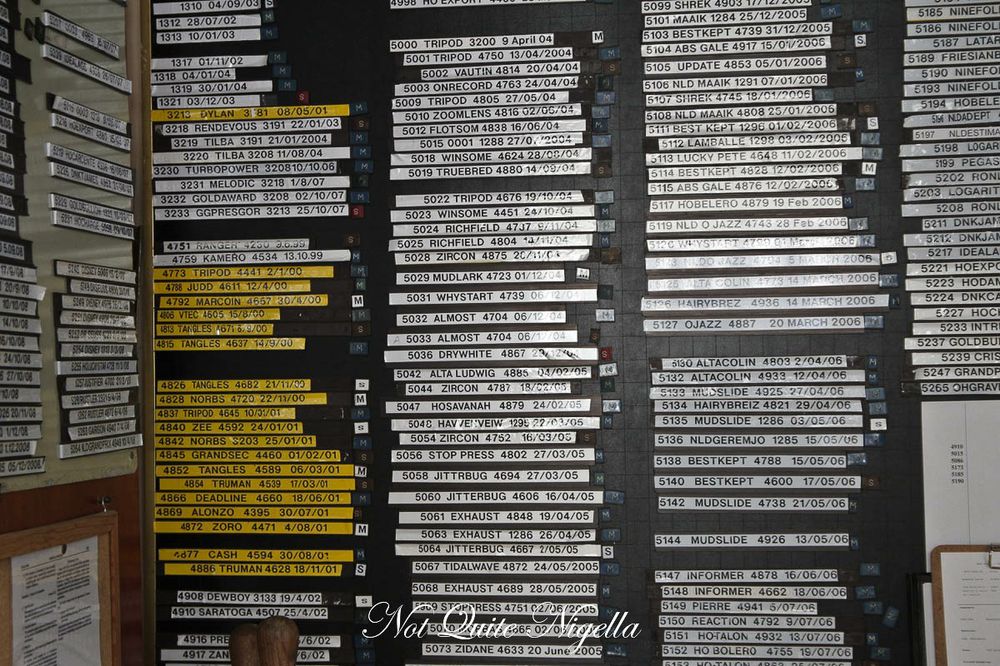 I take a sip of coffee-interestingly all tea and coffee in prisons is served unsweetened as prisoners can make alcohol out of sugar. The amount of fruit they are given is also rationed to try and curb alcohol production. In the office is a list of the names. These are all of the cows. On each line starting from left to right is the cow identification number, the name of the bull that sired it, the number of the cow that gave birth to it and the birth date of the cow. Bull names such as "Turbo Power", "Morpheus", "Billionaires" "Pro shot" and "Fly boy" abound. Cows are selected for legs, feet and udder size as well a temperament. 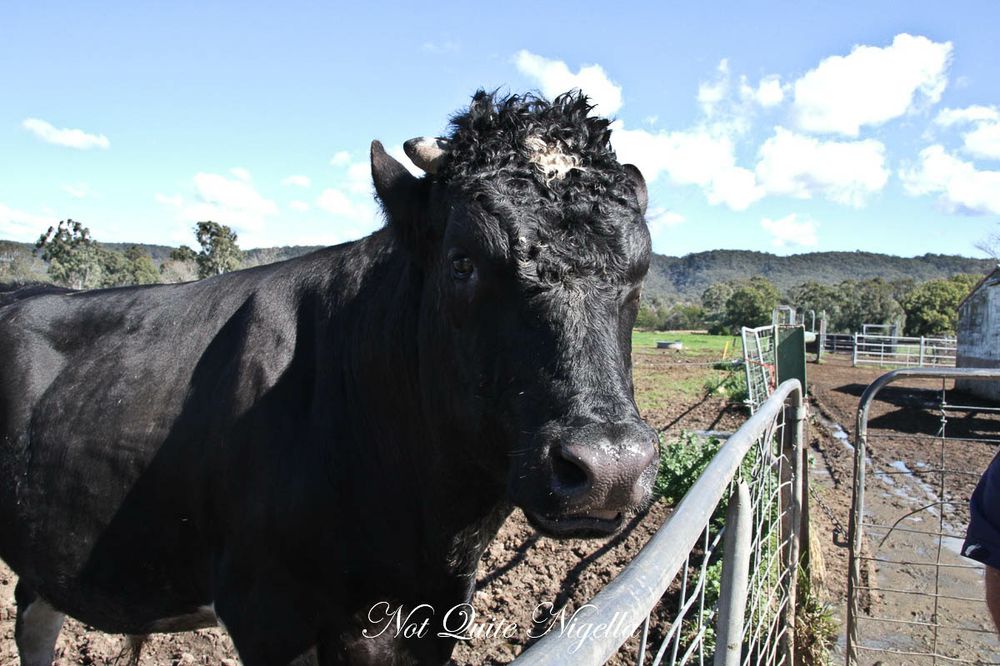 We go outside to a dry pasture to see some cows. They're sweet natured and contentedly munch on fresh green grass all day. One cow comes over for a scratch and Neil knows her very well. "She's just a little sook" he says. We then go over to see Ebony, the bull. He's a huge boy, over a tonne heavy while the cows are about 700kg each. Neil tells me that Ebony likes routine. If you affect his routine he is quite likely to refuse to cooperate. I suppose this is where the phrase "stubborn as a bull" comes in. He looks at us and Neil takes some bread out. He looks closer and stands his ground for a few minutes until he decides that he wants a snack.

It's all in a day's work at the Emu Plains prison.

So tell me Dear Reader, would you be happy to buy dairy and food products if they were made by inmates? 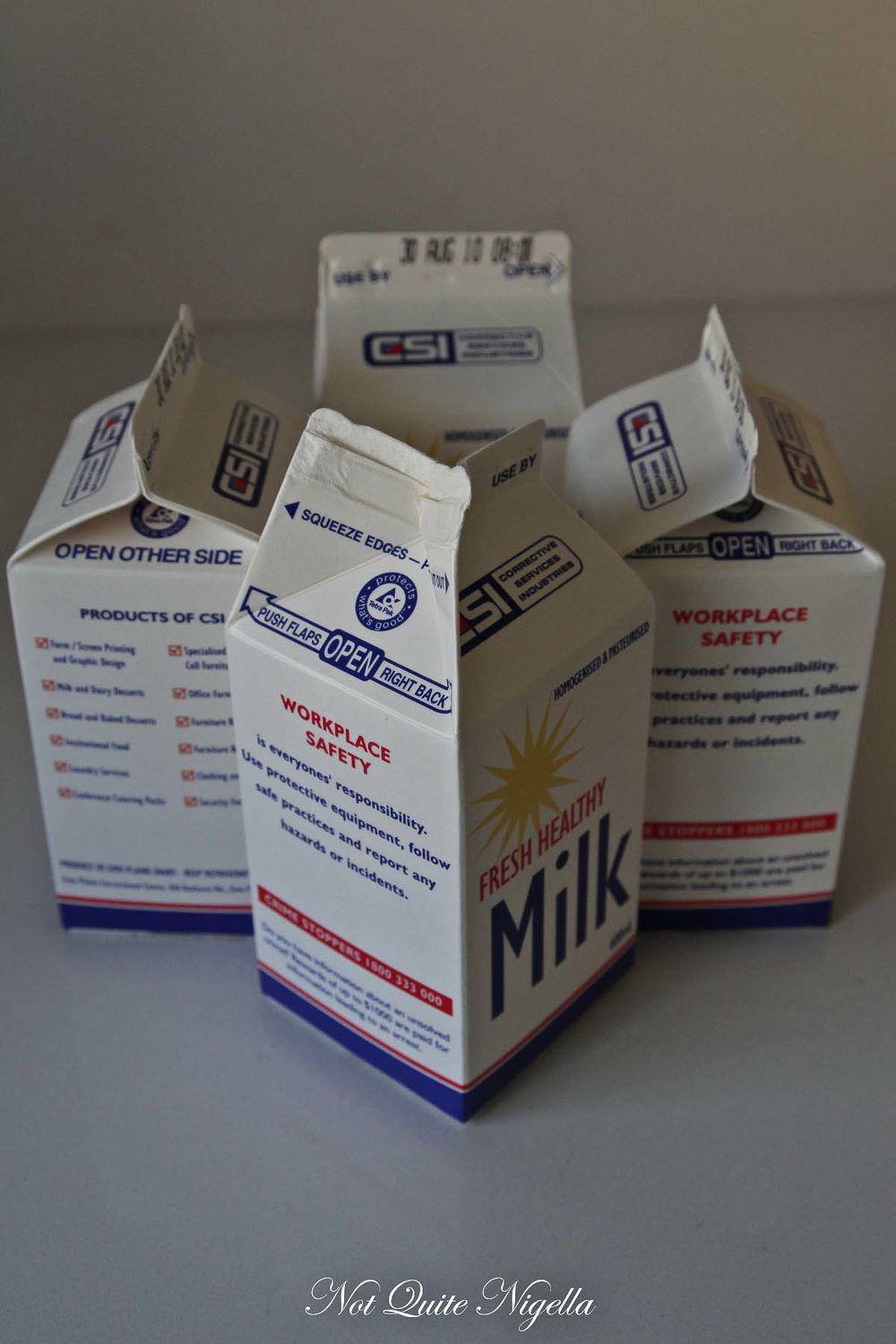 featureA Taste of Gaza And Reading Between The Soup With Laila El-Haddad
featureRescuing Food: A Day With OzHarvest!
featureSo You Want To Be a Food Judge? Secrets & Lessons From A Food Judge
featureLook at what the Postman brought me...
featureSix Lunches, Six People: What Do You Eat For Lunch?
feature21 Fascinating Tips on Etiquette From A Royal Butler {That You May Be Doing Wrong!}
featureAnthony Bourdain, A Tribute
featureHow Much Food Is Wasted? Behind The Scenes of Food Bank!
restaurantA How to Guide on Restaurant Photography & Win 1 of 10 Places At A Photography Workshop!
feature12 MORE Things You Should Know About Food Bloggers