Rescuing Food: A Day With OzHarvest! 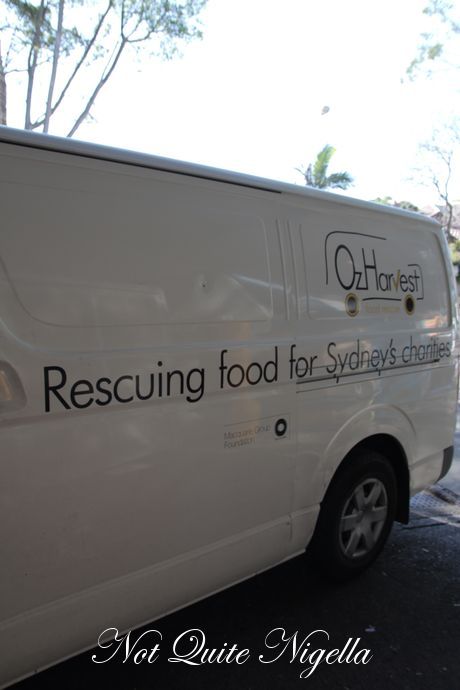 Regular readers will know how much I hate wasting things. I may be extravagant with purchasing but I am also the polar opposite when it comes to wastage. Mr NQN can attest to that. When I recently made 6 litres of blue jelly in the pursuit of a jelly cake, he was left to ingest all of the practice runs. Even though I knew it was easy to make and inexpensive, I still fed him every last drop. 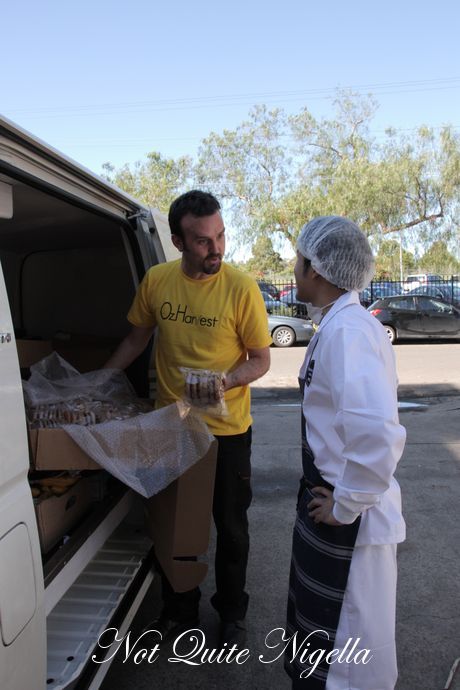 Two years ago I did a story on Freeganism which was a real eye opener for me when it came to seeing how much waste occurs on a daily basis. It was a story I was very proud of, not just because it was nominated for awards but because it was a revelation to me and I think that my darling readers also found it interesting. And when the lovely Anna went on a food rescue day with OzHarvest which is a much needed brilliant service that collects food from companies and restaurants and corporates that also hate waste, I knew that I wanted to do the same thing here in Sydney. 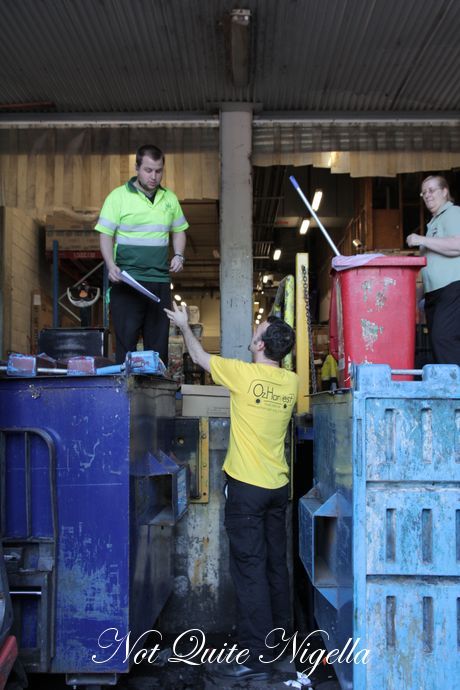 I arrive at the OzHarvest offices this bright Thursday morning. I'm to be a volunteer and riding along with Andrew who has been working at OzHarvest for two months now. The office staff are paid as are drivers and they also have a number of volunteers that accompany the drivers. The vans run 6 days a week, sometimes even on a Sunday and travel as far as Wollongong and Brookvale. They have ambassadors like musician Ben Lee, actor Toni Collette, Neil Perry, Steve Manfredi, Maeve O'Meara and Bill Granger. 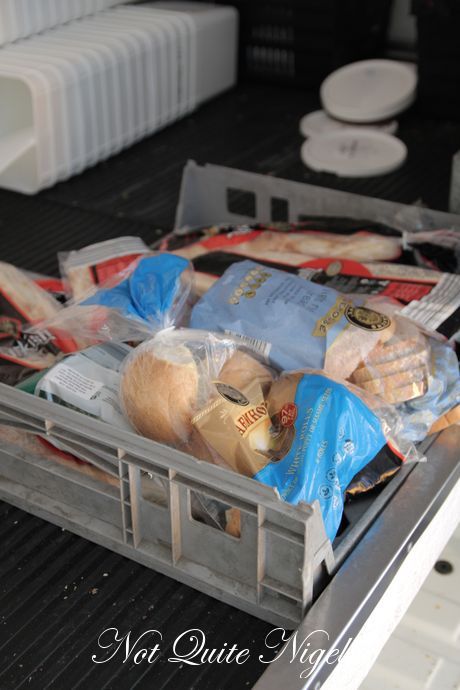 Started in 2004 by Ronni Khan a South African woman who for twenty years, had a successful event planning company here in Australia and saw first hand how much food was wasted on a daily basis.  When she could, she would take the excess food to charities but this wasn't always feasible. She then heard about Angel Harvest, the American version of OzHarvest and flew over to find out more about food rescue and then implemented it here. It is a Not For Profit organisation backed by funding from the Macquarie Group Foundation and Goodman international who provided the vans and office space, they deliver 5,000 meals a day with a single a meal costing less than $1. There are over 700 food donors and 194 receipted agencies (charities). It currently exists in Sydney and Canberra with the first trucks rolling out in Adelaide soon. One of the largest hurdles is the legislation which prevents services like OzHarvest from donating as it holds OzHarvest and the donors themselves liable. Through Ronni lobbying the government, in 2005 an amendment made to Part 8A of the Civil Liability Act which states as long as food is given away for a charitable purpose, there is no risk of liability. 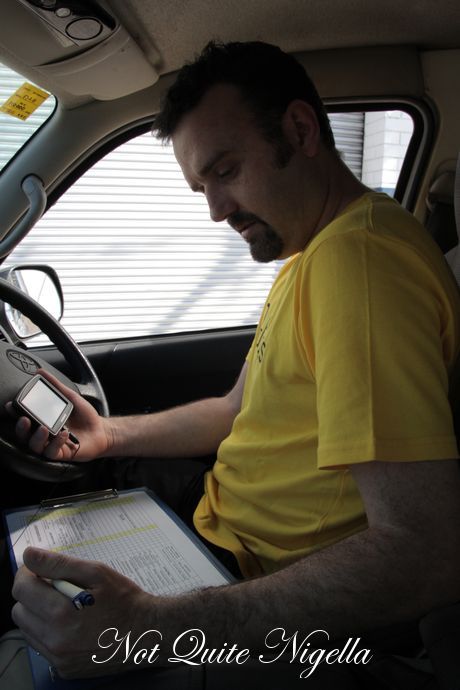 I take a look at Andrew's clipboard. On the left there is a list of pick ups we need to make and then along the way we will also drop the food off and all are in a logical sequence for driving. OzHarvest doesn't store any food, it distributes it usually within a two hour window of it being picked up so by the end of the day, the van should be empty and the charities stocked with food. I take a look at the list. There is Aldi and Woolworths which are our first stops. And I did mention who doesn't donate? Coles is the only one of the three major supermarkets not to donate. I ask Lisa Stapleton, a volunteer coordinator why and she says "Unfortunately we have not yet had any interest from the people we approached within Coles to come on board as food donors". 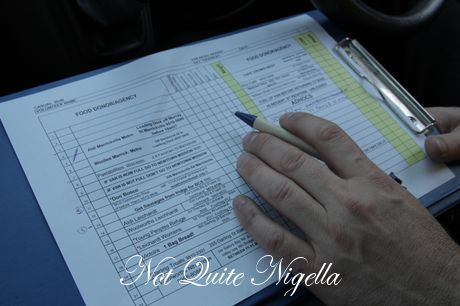 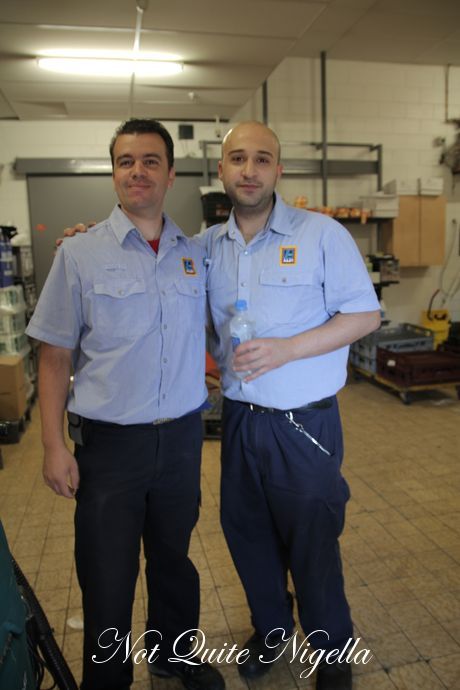 We stop at Aldi and what they have each day is always a surprise. Sometimes there will be a lot of food but sometimes there may just be the one variety. Andrew tells me that one day he just picked up a huge amount of potatoes. Today there is a lot of bread. Bread is one commodity that is plentiful. As it is so cheap to produce, bakeries often make much more than they need to. Interestingly, bread like sourdough is hard to give away as it is a harder bread and many of the charities have clients whose teeth aren't in good condition and it is hard for them to eat. All drivers undergo a food safety exam prior to working there. 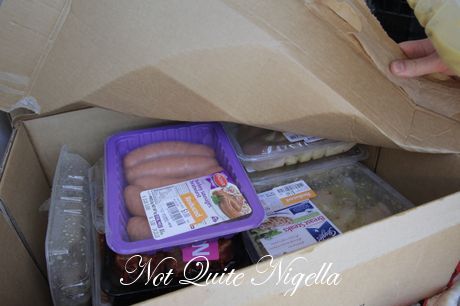 What is the most precious commodity? "Meat is like gold" Andrew says. It is expensive to buy and everyone wants it as I learn later when the charities have a look at what is available. "We once got 20 boxes of Cleavers organic meat because it was labelled with the wrong weight"  he tells me. 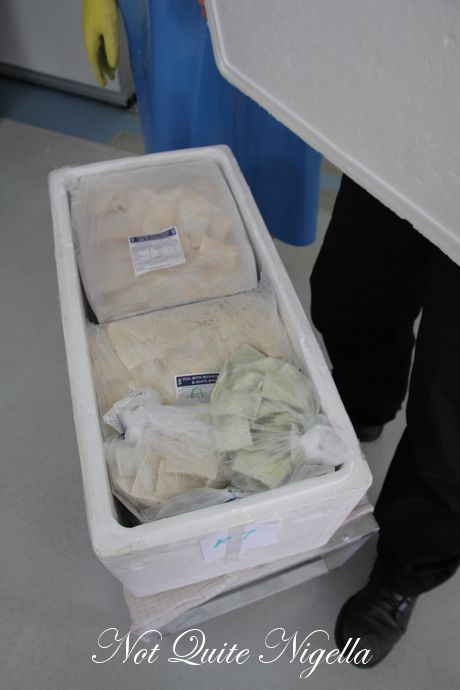 We stop at Woolworths where we pick up an assortment of food including a lot of the prized meat and the Pastabilities which has a huge esky of frozen filled pasta. 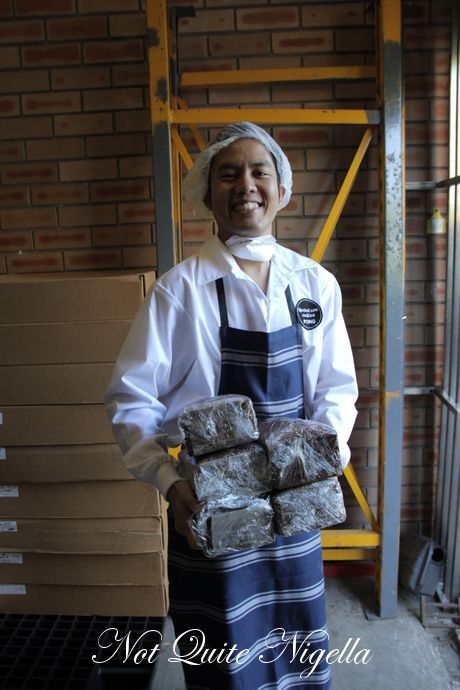 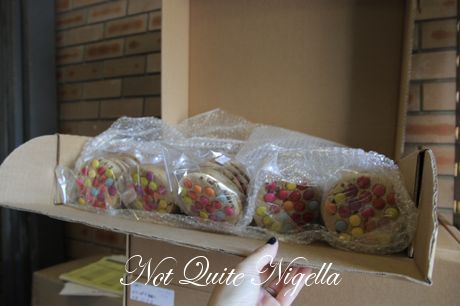 Cookies baked for 15 minutes longer, not quite perfect so not sellable

Our next stop is the Spotted Cow cookie factory where we are greeted by Pong who gives us an enormous 11 boxes of cookies. Each box has about 120 cookies inside them!  They are good until 2011 so we ask why they are giving them away and Pong shows us that they were baked for about 15 minutes too long which results in the smarties inside them breaking so they're not of a saleable condition. We also get 5 enormous cafe sized loaves of banana bread. 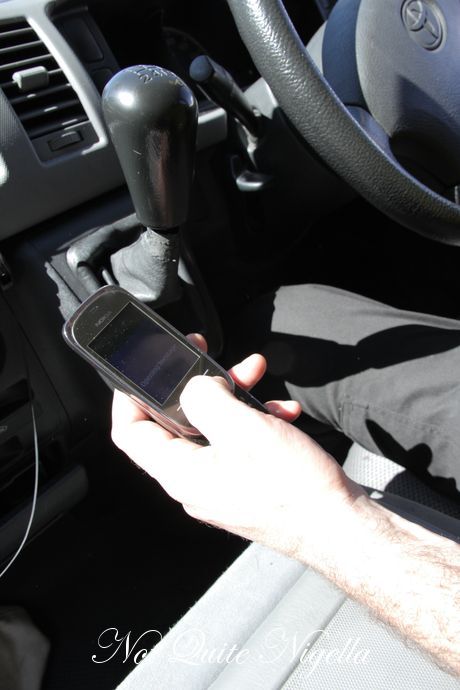 The mobile phone beeps and there's  a new message. Each van has a GPS so that Head Office can see where they are and when a business calls for a pickup they text them to pick up a new shipment. 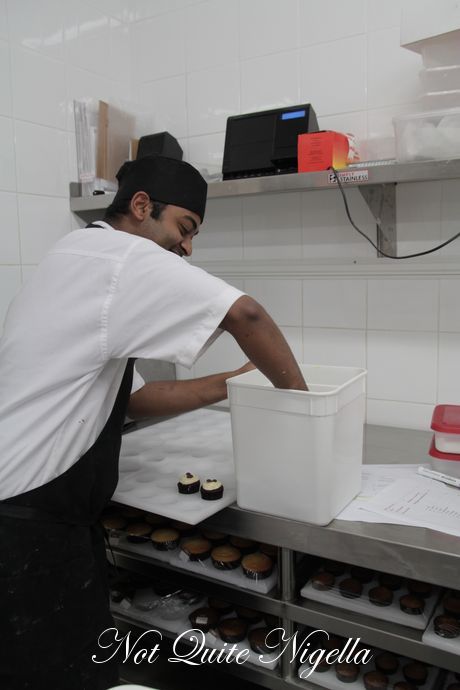 Packing away cupcakes at Ghermez 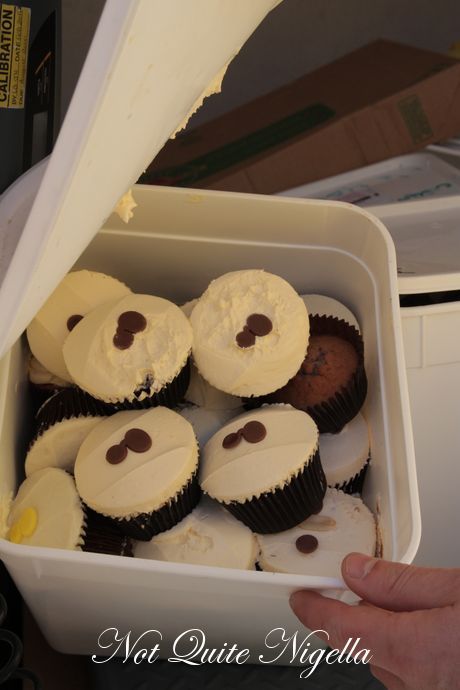 One of five boxes

We're headed off to Ghermez cupcakes! As they're a regular donor Andrew gives them boxes to use. They have four boxes ready for us and are about to fill a fifth. They're all the same flavour and curious I feel the cupcake assuming that they would be older and drier cupcakes but they're soft and fresh. 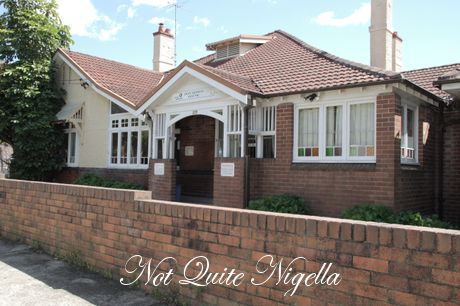 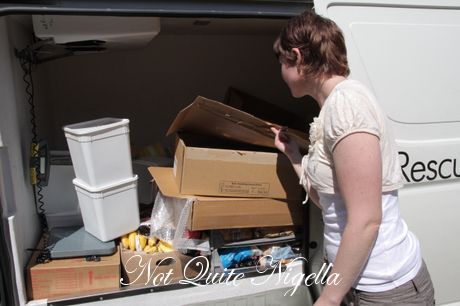 With our van halfway full we make a stop to our first destination- Don Bosco House which is part of the Youth Off the Street program. What is key is matching the charity to the need. Not all charities have kitchens so they can't always take the fresh, uncooked meats. At Don Bosco, they are feeding boys so when a guy comes out and whoops at the sight of "Cupcakes! Cookies!" he is excited. "I've never seen someone so excited to see the OzHarvest van" the woman from Don Bosco laughs. At Don Bosco they take two trays of sandwiches, a banana bread, cookies, cupcakes and more. This charity sleeps 11 boys. Is there anything that OzHarvest won't take? Apart from cooked rice and soft shelled seafood as they have a high contamination potential they also won't take products that contain alcohol due to the profile of the charity's clients.

And where is the best quality food found? Not surprisingly, from the sets of television food shows like Masterchef and My Kitchen Rules. Andrew recalls entire wheels of reggiano and white truffles. The items aren't close to being used by and they are top quality but they just don't need them for the show anymore if they were to be used in a cookoff challenge. White truffles! Yes! 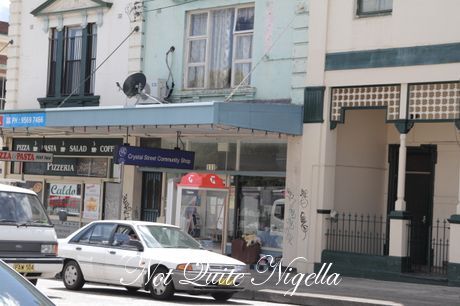 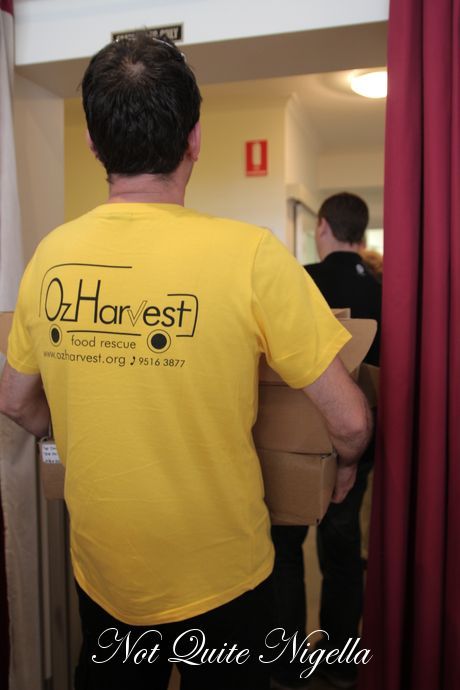 We then visit a community store where they hold a weekly barbecue for boarders who live next door and any extra food that isn't eaten then is given to the boarders to supplement their meals. They have a standing request: sausages, onion and bread for the BBQ. Andrew explains that there is a corporate volunteer present - many large corporations have their employees do voluntary work for two days a year. Interestingly, did you know that St Vincent De Paul has a corporate sleepout where CEOs, business and community leaders sleep outside on cardboard to see what it's like to be homeless? Interesting! 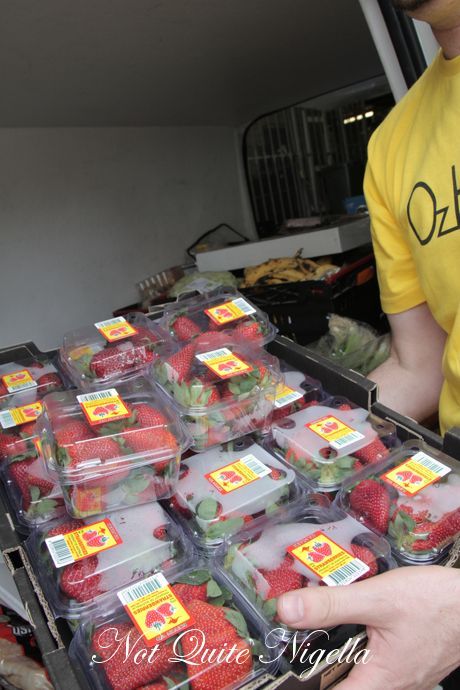 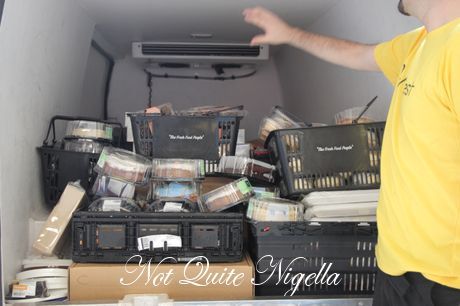 After the second Woolworths and Aldi pickup 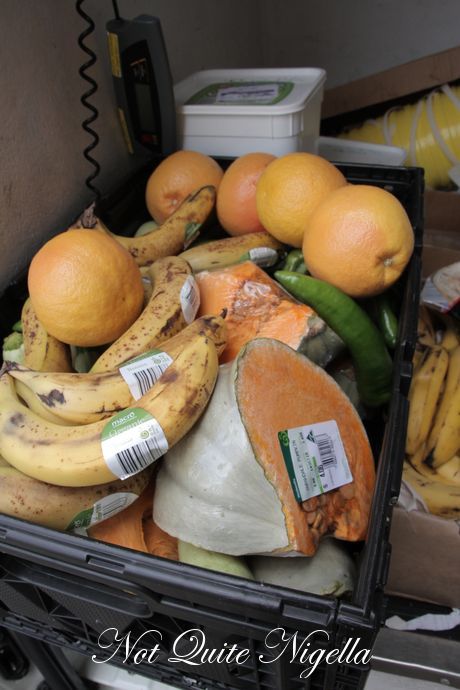 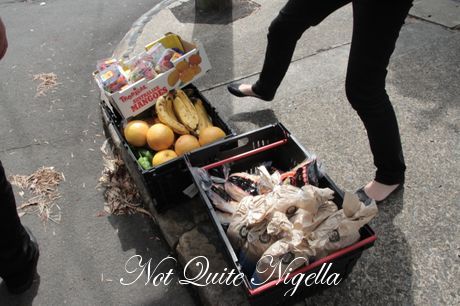 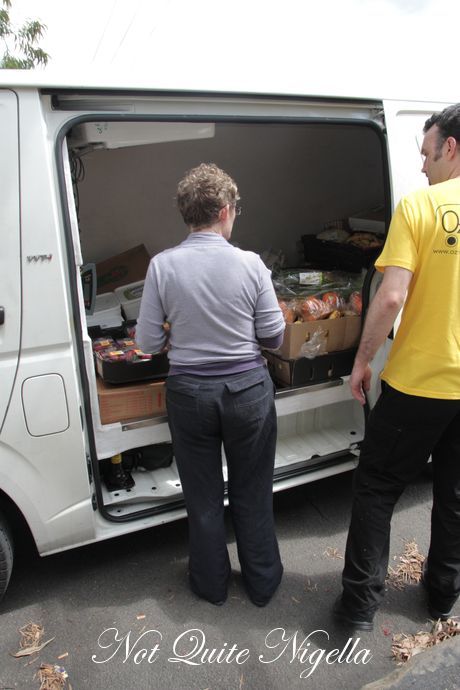 We are then scheduled to drop these off to a women's refuge and a young persons refuge in Leichhardt. The women's refuge are interested in fruit and vegetables and meat as well as a lot of bread and they take a lot of the bread supply which Andrew is happy to give as it can be hard to give away. The young person's refuge takes much the same along with some cakes, shallots and other things they can cook with. 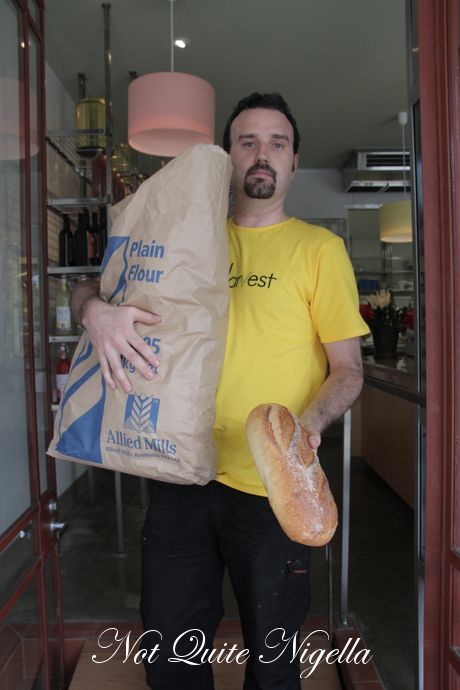 Our last stops for the morning are in nearby Balmain at Victoire bakery where we pick up a large bag of bread and then at Darling Treats where cakes and other baked goods are handed over. 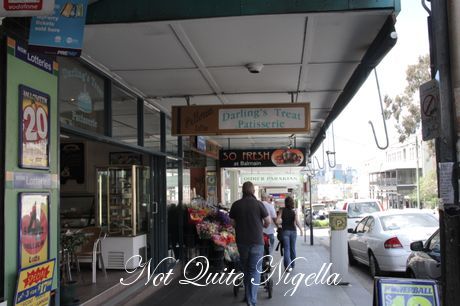 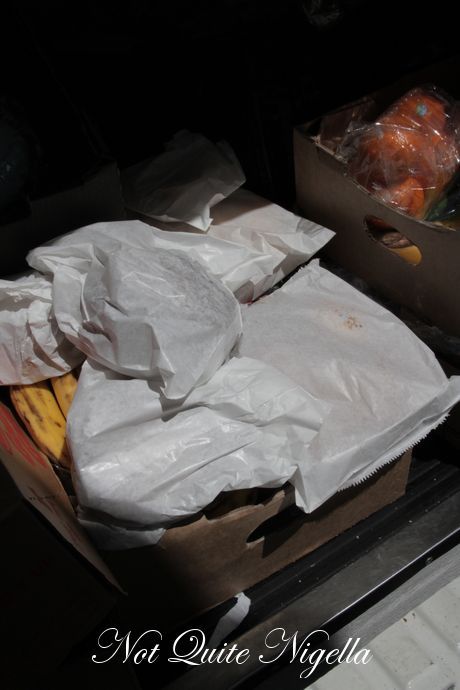 The Darling Treats pickup of cakes and breads

The afternoon for Andrew will be filled with corporate pickups wherein banks, accountants, lawyers and other business call OzHarvest to pick up food that has been ordered in for catering of meetings and events. Although they mean well sometimes they can get calls for a box of four apples. Between 4.30pm and 10.30pm one van is operational with one person taking calls and this is to pick up items like barbecued chickens and other takeaway food items that haven't sold from takeaway shops and steak houses and pie shops.

Chefs from restaurants don't tend to donate food as they are usually quite good at ordering so that there isn't much wastage so they donate money instead. And how much of the food is used? 100% of the food that charities receive is used. The charities know what they need and how much they can use and don't tend to take more than they will use. Andrew tells me that the food budget for a place like the Newtown Mission is a miniscule $100 a week so it is a much welcome and needed service. Another organisation is FoodBank who deal with non perishables and they store the perishables and charge the charities a nominal fee for the produce.

It's the end of the food ride for me today and it is fascinating how much excess food there is and how much the charities rely on this service and how much they can take. Andrew tells me "This is a comparatively small amount, sometimes we fill our vans until they're full".

So tell me Dear Reader, would you donate food to places like OzHarvest?

To donate food or volunteer at OzHarvest, see their website: http://www.ozharvest.com.au/