I decided to create a regular "To Market To Market" story to show the items that I have been sent over the past few weeks that I liked. Now getting goodies in the mail is always fun and taste testing them with my friends and family is even more fun. But what fun is it if I can't share it with all my lovely readers? So the lovely people at these companies also agreed to send out a pack of these items to some lucky Not Quite Nigella readers so that you too can sample their goodies instead of just reading about them!

Just leave a comment at the end of the story telling me which product you'd like to try and why. I'm very sorry overseas lovelies but these can only be posted within Australia. I shall select winners on the 14th of August :)

Entries are now closed, the winners are:**

Andy L. for Relish This 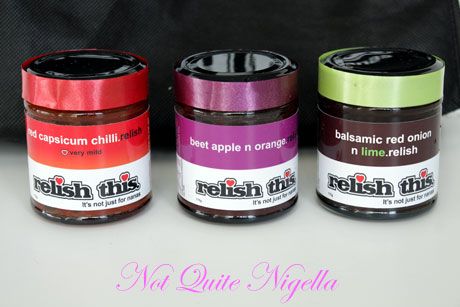 You probably know of my jam making obsession however I've never made relishes, always buying them instead. The story behind Relish This is one that especially interested me as Sarah, the woman who started it, did so as she was sick of corporate life. I could completely relate to that! I was sent three flavours: a Balsamic Red Onion & Lime; a Beetroot, Apple & Orange and a Red Capsicum Chili and they were very happily sampled with the Balsamic Red Onion and piquant Lime being the group's favourite. The Beetroot, Apple & Orange had spicy aromatics and sweetness with little bursts of currants lending it an almost Indian feel and the Red Capsicum Chili relish was a favourite of Rose who likes foods spicy. It says very mildy spiced but I'd say there was a definite kick to it! ;)

Thanks to Relish This, one lucky Not Quite Nigella reader will receive a sampler pack of Relish worth $40! 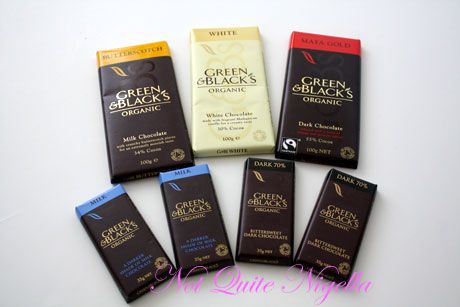 Green and Blacks Organic Chocolate has been available for a while here and I recall a near stampede when they were giving away little bars at the Good Food and Wine Show. My first package of this went missing and I can only guess that there's a very, very happy neighbour or postman of mine who received it instead. I was sent bars of the Butterscotch, Dark 70%, Milk and Maya Gold with orange and spice. I had on hand my eager  tasters who were all too happy to help sample the chocolates. The unanimous favourite flavour was the Butterscotch which had small shards of Butterscotch scattered throughout the chocolate. Mr NQN also loved the dark 70% which was surprisingly smooth for a chocolate of that high cocoa content. Yes we were some very happy piglets that day...

Thanks to Green & Black's, one lucky Not Quite Nigella reader will receive a sample pack of chocolate! 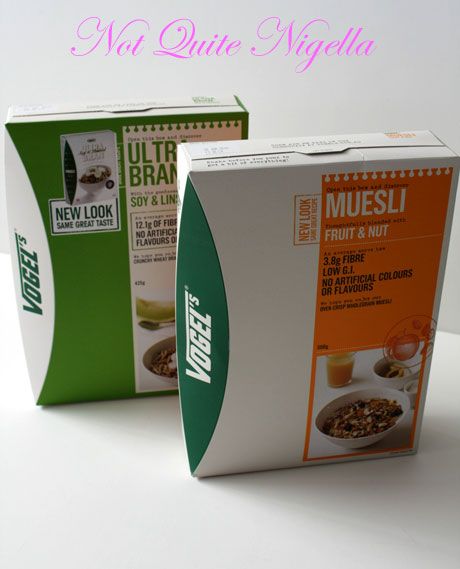 Like Jerry Seinfeld, I love cereal but I also like to eat it late at night when I need a bit of a sugar rush and crunch but I usually make my own if I have time. However July was a crazy month and just as my batch of home made granola finished, a package arrived. The courier probably had no idea why I was so happy but I was relieved that I could tick "Make Granola" off my to-do list as the package contained some Vogel's cereal. I tried the Fruit and Nut variety and loved the cinnamon flavour in it and the fruit which was a nice change from most healthy boxed cereals that I find taste marginally better than cardboard. Normally nutty, delicious and healthy are mutually exclusive concepts for a lot of cereals. As for the other flavour, I'm afraid that's packed up in a box and it's somewhere in our new apartment. I'll christen that box when we move in.

Thanks to Vogel's, two lucky Not Quite Nigella readers will receive 1 pack of the Fruit & Nut and 1 pack of the Ultra Bran Soy & Linseed cereals! 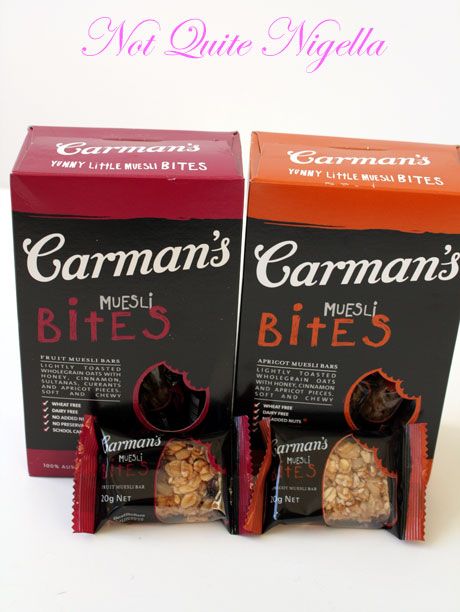 I wasn't sure if Carman's would send me any more goodies as I had mentioned that I didn't really go for their rounds very much preferring their regular muesli bars (sorry I was being honest!) but they did and I got a box of the Low G.I. Apricot and Almond and the Fruit bites. These similar to their regular muesli bars and were great and a lifesaver while we were moving as they kept my stomach from growling and I really liked the cinnamon flavour in both types and as a result, they were polished off in no time.

Thanks to Carman's, one lucky Not Quite Nigella reader will receive a box of the Apricot & Almond Bites and the Fruit Bites! 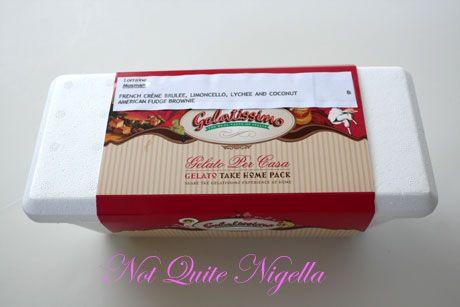 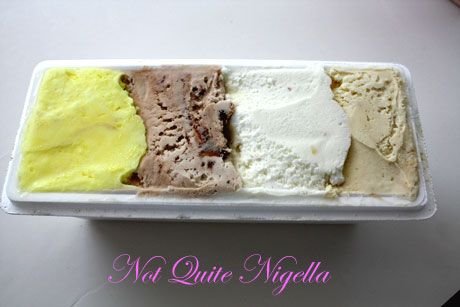 Gelatissimo Flavours of the World

Being sent ice cream in the mail is even more exciting than you would think even in this chilly weather and so after dinner one night, The Second Wife, Gravy Beard, Naomi, Mr NQN and I all retired to do a quick ice cream tasting. I was sent a take home pack of Gelatissimo's "Flavours of the World" range which included Chinese Lychee & Coconut, American Fudge Brownie, French Crème Brulee and Italian Limoncello. The Lychee & Coconut was the definite crowd pleaser as it was subtly but definitely flavoured with both flavours and tasted very much like eating fresh lychees with coconut. The Creme Brulee was another favourite with the unmistakable toffee flavour laced through it which left us pondering "How _do _they get the brulee taste in it?". The Brownie was sweet and had a huge chunk of brownie in it which Gravy Beard happily appropriated. The Limoncello had many divided with some finding it too tangy to some loving its lemon tanginess (me). The Flavours of the World range is available for a limited time only and you can check out their other flavours (there are 12 in total).

Thanks to Gelatissimo, one lucky Not Quite Nigella reader will receive a voucher for a take home pack of ice cream from your nearest Gelatissimo store! Voucher cannot be redeemed in Perth or Tasmania. 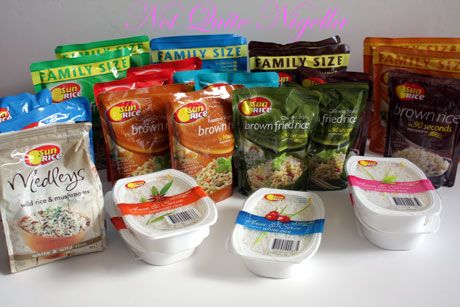 I was sent a huge range of rice from Sunrice including  chicken rice, Mexican rice, egg fried rice, brown rice, brown rice variations, chinese style fried rice, jasmine rice, coconut rice and wild rice with mushroom. My favourite was the chicken rice (although I know your next question, this isn't like Hainanese chicken rice) but would have preferred it without the corn pieces and the coconut rice was great with a curry. I have always been a fan of the brown rice packets and usually have a stock of at least 1 or 2 in the cupboard as they're very convenient and I'm saving the Wild Rice for a special meal. And for someone like me that's living out of a suitcase at the moment, they're fantastically easy and the grains are never soggy or stuck together.

Thanks to Sunrice, one lucky Not Quite Nigella reader will receive a sample box of Sunrice rice!

So readers, leave a comment as to which item you'd like to try and why and you could be receiving it in the mail! Thanks again to these generous brands Relish This, Green & Black's, Vogel's, Carman's, Gelatissimo and SunRice for providing prizes.

Best of luck and enjoy!