Blanquette de Veau & "I Know How To Cook" Book Review 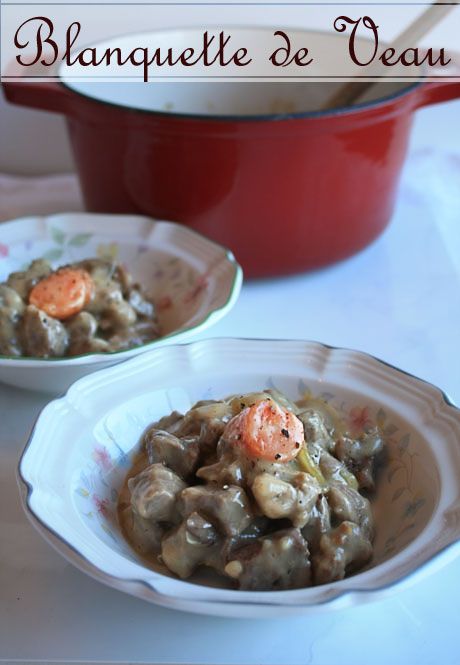 I was recently sent a copy of "I Know How To Cook" to review. For those of us that grew up outside of France and or without French relatives or parents, you may have a fleeting familiarity with the book itself but if you happen to be French or grew up with French relatives or parents, chances are you have a dog eared, well worn copy of Je Sais Cuisiner in it's original French on your bookshelf with generations of French thumbs leafing through the book . Now for the time ever since it's original publication in 1932,  it has been translated into English by no other than food blogger Clotilde Desoulier from Chocolate and Zucchini. 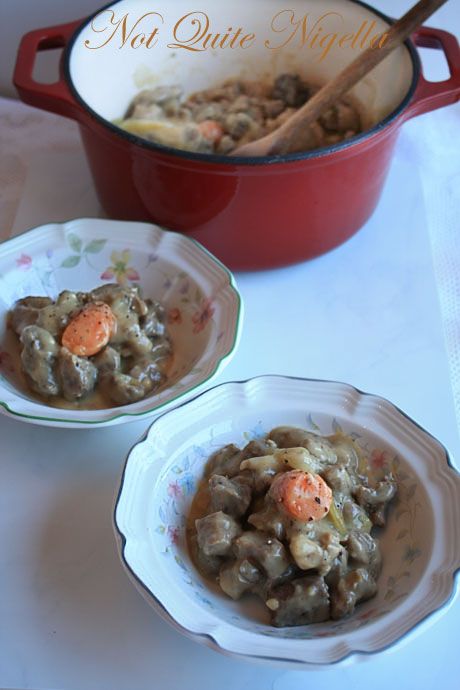 The author, Ginette Mathiot (who has now passed) was a recipient of the French Legion of Honour and  published more than 30 books but _Je Sais Cuisiner _is said to be her Magnum Opus. Certainly it's reference book thick with an unusual dust jacket with thick unglossed paper and a cartoon drawing on the front and it is filled with 1,400 recipes.  The first comparison I can think to make is with Stephanie Alexander's Cook's Companion or The Silver Spoon in terms of breadth of recipes and size. The book was said to be originally designed with a young bride in mind so she could learn to cook the basics. 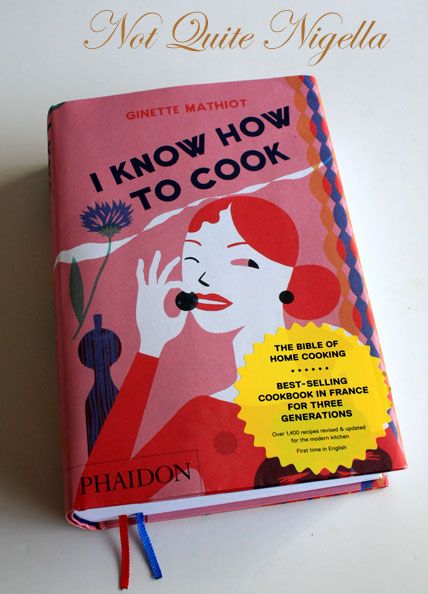 The food is every day French cooking that covers everything you could think of from the basics, terminology and an extensive section on the many French sauces (the building blocks for French cuisine) as well as each of the different types of meat including game, soups and it breaks desserts down into fruit, milk and egg products, ices, cakes and pastries as well as sweets and preserves. All of the Classic French dishes are there and opening to any page and will probably have you pegging it with a post it note. The ones that I've most urgently post it noted were: gougeres, fromage blanc and sultana tart, lobster thermidor, Duck terrine with prunes, Coq au Vin, Eggs in Snow, fruit bavarois, pithiviers, honey nougat and pastilles. Photos appear in blocks rather than accompanying the recipes themselves which can make for some extra flicking through and they are clear, portrait, top down photos. There aren't a huge amount of photos and what there are are mouth watering yet achievable. 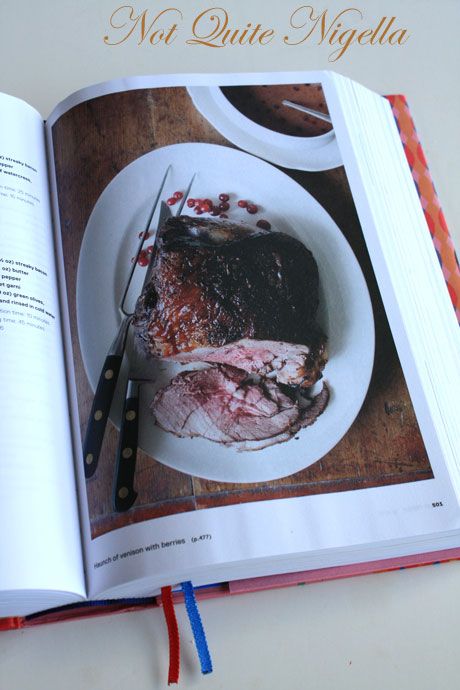 I recall interviewing Justine Schofield from Masterchef and how she spoke of her mum's amazing Blanquette de Veau and seeing a recipe for it in here prompted me to Post It Note it. It's pure comfort food and given we're moving out of Comfort Food season (i.e. Winter) I wasn't sure if I should make it but a cold, windy spell in Sydney after some bizarre weather (red dust anyone?) convinced me otherwise. 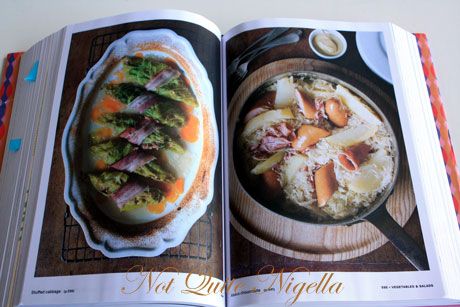 There is only one thing I would say is a shortcoming of this book and it's accessibility to some of these ingredients which tends to happen with overseas books. I find that when I get a Nigella book I find it nearly impossible to find Elderflower cordial and gooseberries and other things that she cooks with but of course she's British so that's what they have available (and I'm sure some of my readers would scratch their heads at getting lemon myrtle and other Australian items). Some of the ingredients are specialty shop items and things you may need to put in a special order for but there are also plenty of simple dishes to make so it's an achievable book. For the Osso Bucco, I rang around last minute to Victor Churchill who are the most likely to have the shoulder of veal but they were  out of it but suggested using an Osso Bucco cut and cutting away the bone which I did. 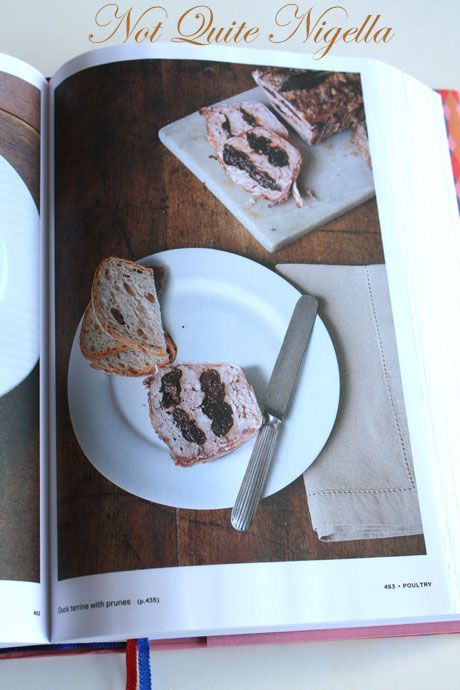 The Blanquette de Veau is essentially a creamy veal stew made with a roux base rather than a cream sauce. The veal was lovely and tender and the sauce creamy and rich. I brought it to the Forensic Eating Dinner Party and everyone seemed to like it although by the time it hit the table much of the sauce had evaporated so serving this as soon as it's done with some rice is the best way to eat it. And the best part of using the Osso Bucco cut was having the marrow bones and sucking the soft marrow out of them slowly and with a long drawn out unhurriedness. Would I make it again? Absolutely and I'd do it with marrow bones.

It's a superb book to learn French bistro cooking (6 million copies sold can attest to that) and if your little one has been inspired after watching Masterchef, some of the recipes are simple enough for them to do (under supervision of course) and who knows, perhaps you'll grow your own Masterchef.

Achievability: 3.5 out of 5 (as it's not Haute Cuisine, it's home cooking)

Usability: 4.5 out of 5 (very simple and clear instructions)_

Degree of difficulty: Medium but mainly with sourcing some of the ingredients

Gift book: Yes for Francophiles_ who will love the fact that it has finally been translated into English._ Plus it's huge and size can count as far as presents go_.

So tell me Dear Reader, what is your favourite French dish?

And Wallpaper Wednesday is back! Today we have for you a Pumpkin Cheesecake just in time for Halloween coming up! 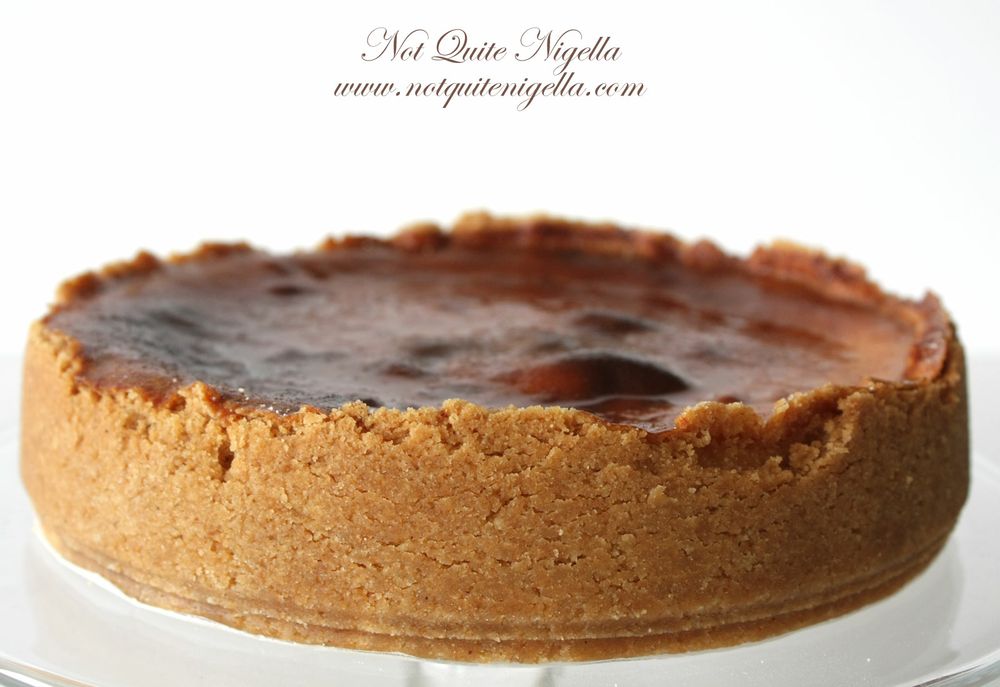 And check out my mention in C!ao Magazine :) How very exciting! 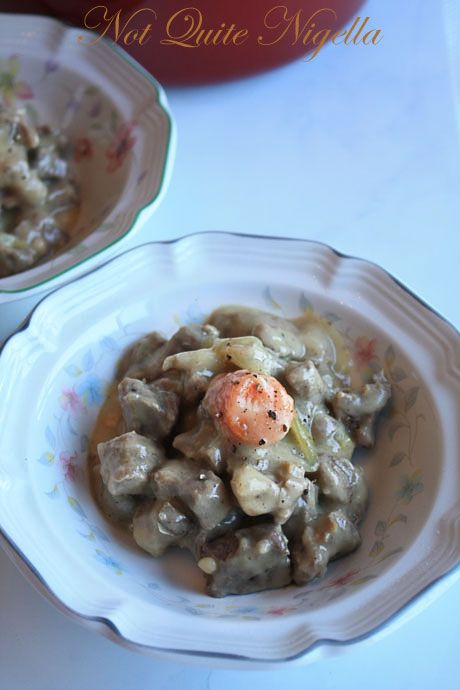 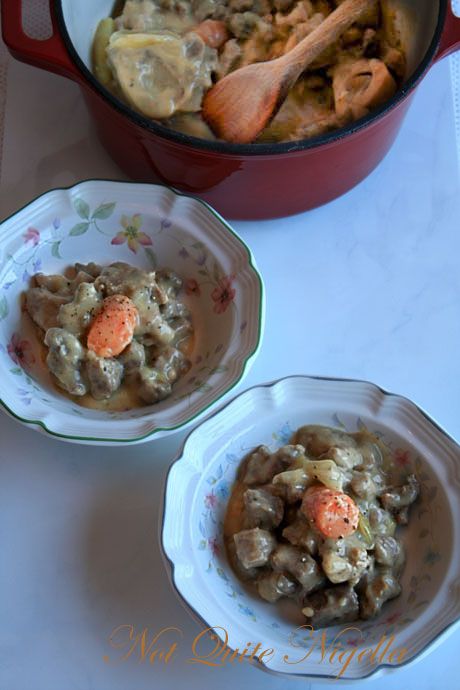 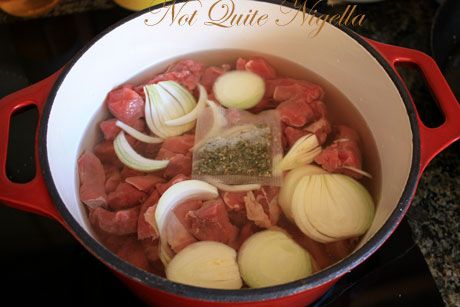 Step 1 - Put the veal pieces in a heavy based pan and pour in enough water to just cover the meat. Add the wine, carrot, onion and bouquet grni. Season with salt and pepper, bring to the boil, skim, then reduce the heat and simmer gently for 1.5-2 hours. Skim the fat and scum from the top occasionally. 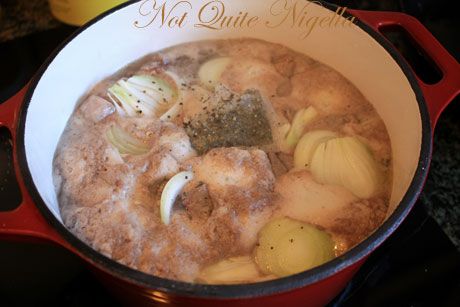 The initial scum when bringing it to the boil 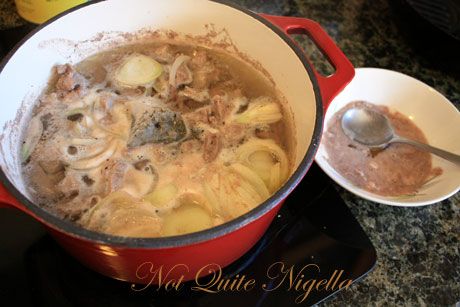 Skimming throughout the poaching process 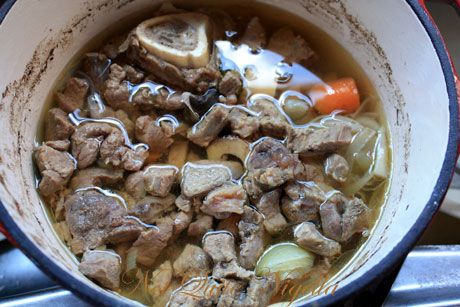 Step 2 - Drain the meat and keep it warm, and strain the stock in whcih it was cooked. Make a blond roux with the butter, flour and strained stock. 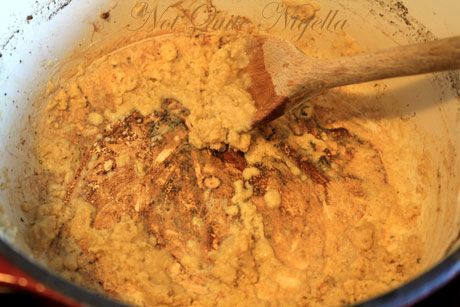 Step 3 - To make the blond roux, melt the butter in a heavy based saucepan over moderate heat. When it is hot, on hte pointof smoking, add the flour and cook stirring it with a woonde rspoon until the roux is light fawn in colour and stil sandy in texture. Take the roux off the heat and gradually add the stock or water, stirring constantly to avoid lumps. Return to the heat and slowly bring to the boil, stirring all the time. Once boiling, reduce the heat to a simmer and cook gently for  for 10 minutes stirring frequently. Just before serving, whisk the egg yolk into the sauce over a low hehat until it thickens. Pour the sauce over the veal and serve with rice. 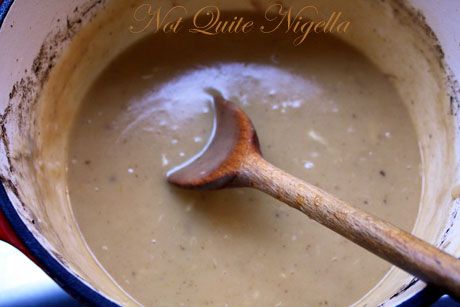 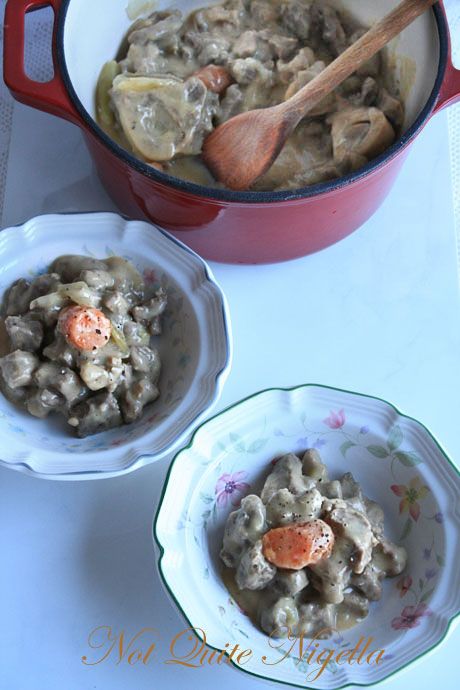