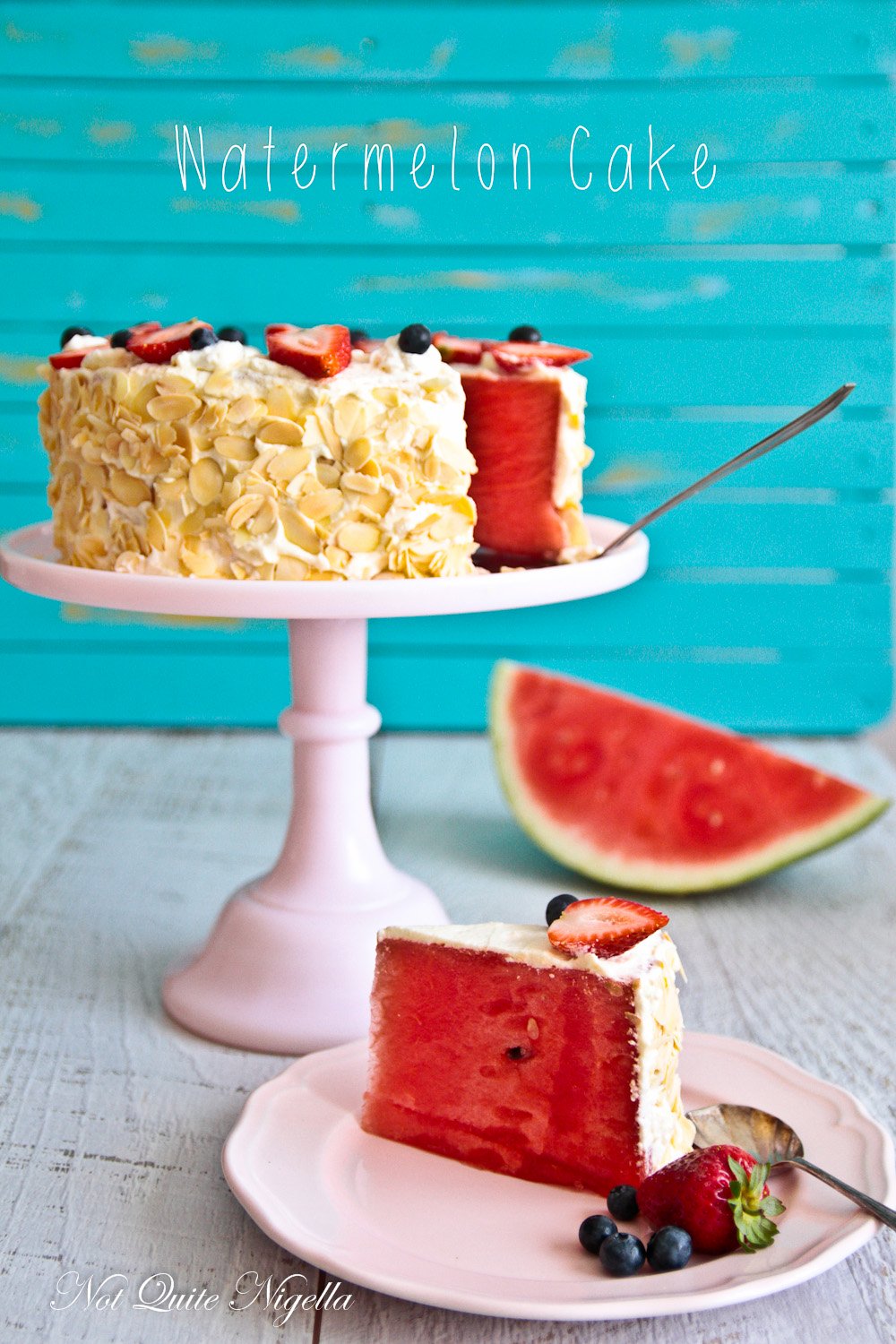 At the risk of completely exposing myself to an ex of mine (who I doubt reads my blog anyway), a while ago I had the most vivid dream about a former boyfriend. In it what appeared to be his ghost rested on my pillow case while I was asleep and had a conversation with me. We caught up on each other's lives and spoke for a few minutes.

Then I woke up with a start and looked around. I almost expected for him to still be there. I was terribly confused and discombobulated. I glanced at the clock and winced at the early hour. I looked at my sleeping husband. He clearly hadn't been awoken by a visitor at night. I started to wonder about my dream. I hardly ever thought about this ex as it was a short relationship. Was he dead? Was that his ghost? And why did he come to me? There would be about at least a hundred people he would come to before me.

I resisted the urge to find his number and call him. Mainly because he had once turned to me and said "You're weird, you know that?" I don't think he meant it unkindly or perhaps he did - the man was emotionally evasive. So to ring him ten years later to ask "Are you dead?" seemed silly so I quashed that crazy vivid dream. I still wonder if he had a life and death experience at the time. I figure one day if I bump into him I'll tell him about my crazy dream. 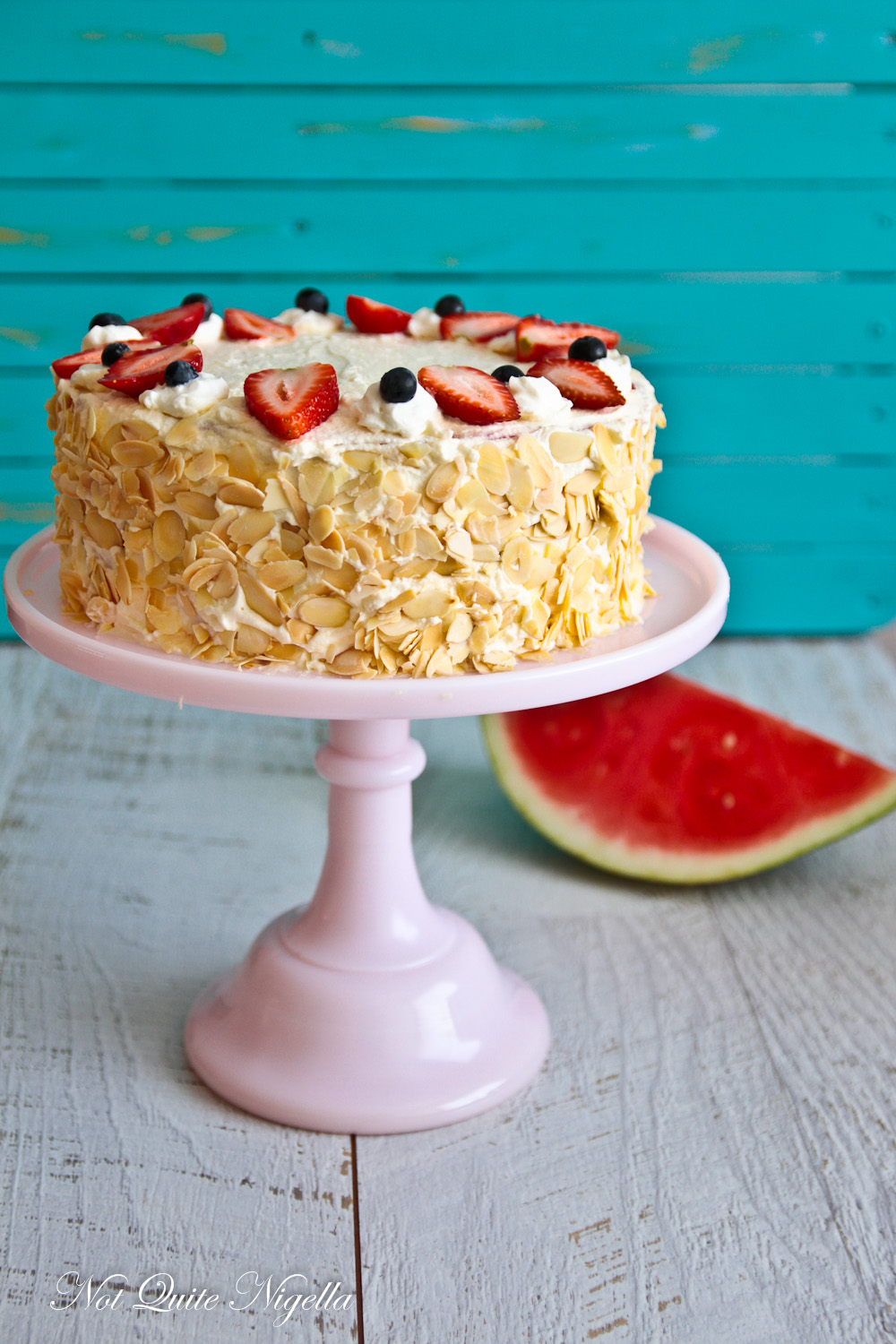 Speaking of dreams, I first saw this amazing watermelon cake on my friend Christie's blog Fig & Cherry and she got it from Viola at Projectsweetstuff (okay this is sounding like cake gossip no? ;)). Christie made it for her daughter Poppy's 3rd birthday and I thought that it was a brilliant idea. But I had to save it for the right person.

That would be my mother in law Tuulikki who usually has to miss out on cake because it contains eggs. When I decided to make it for her birthday I thought about little else and it even invaded my sleep where I constructed the whole cake in my dream! The next morning Mr NQN had gone out early with the car for a bike ride so I texted him to bring one a whole watermelon, some strawberries and blueberries - the rest which were just cream and flaked almonds I already had.

Although it sounded straightforward enough in concept I was really surprised at how really easy and effective it was. Perhaps because I'd already gone through a practice round in my dreams! It took just 15 minutes to construct. For such a simple idea the look is incredible and the there's just a little bit of "naughty" among the virtuous (because really otherwise what is the point?).

So tell me Dear Reader, if you had the same dream, would you have called him? And what do you think of the idea of this healthy(er) cake? Would you serve it? 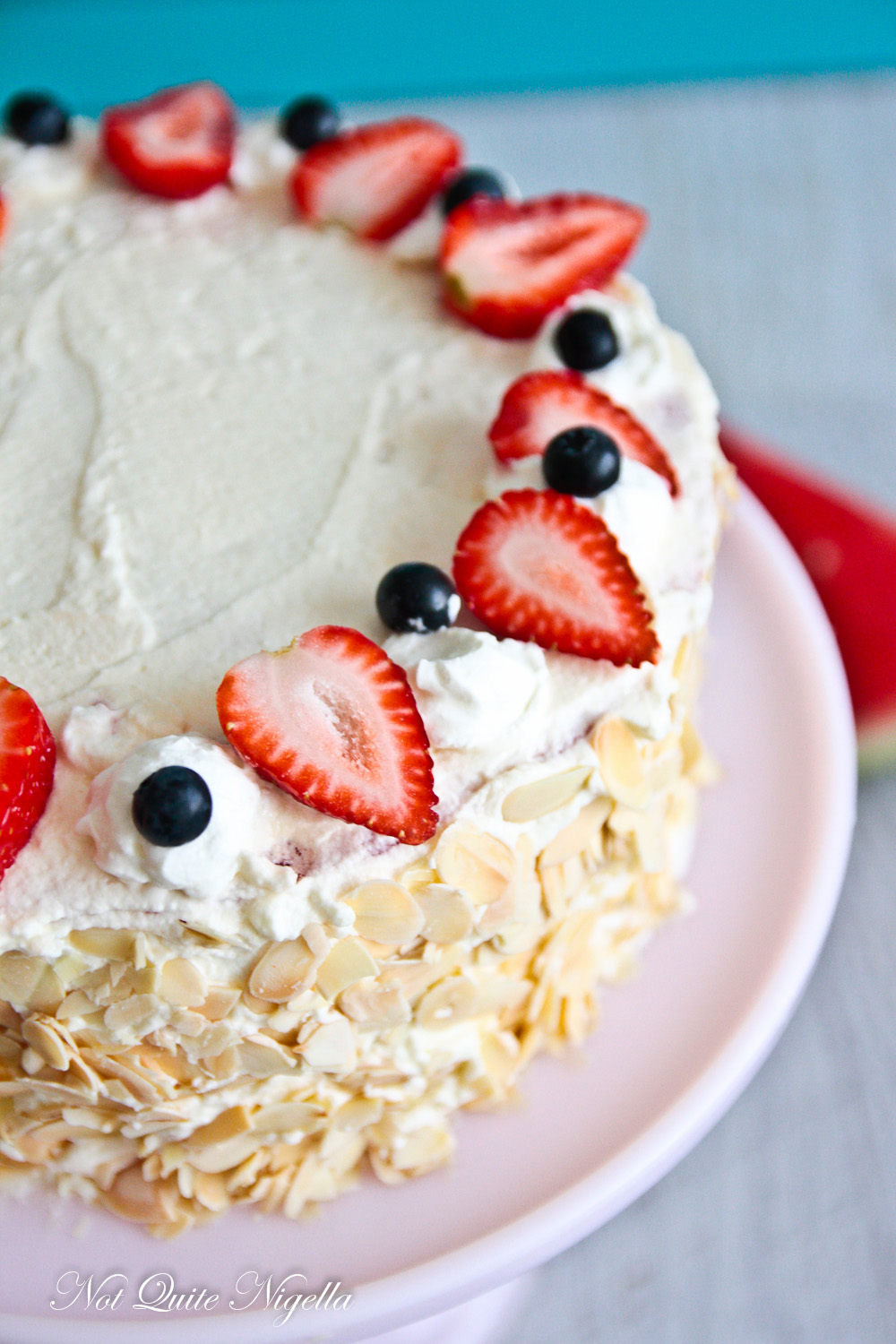 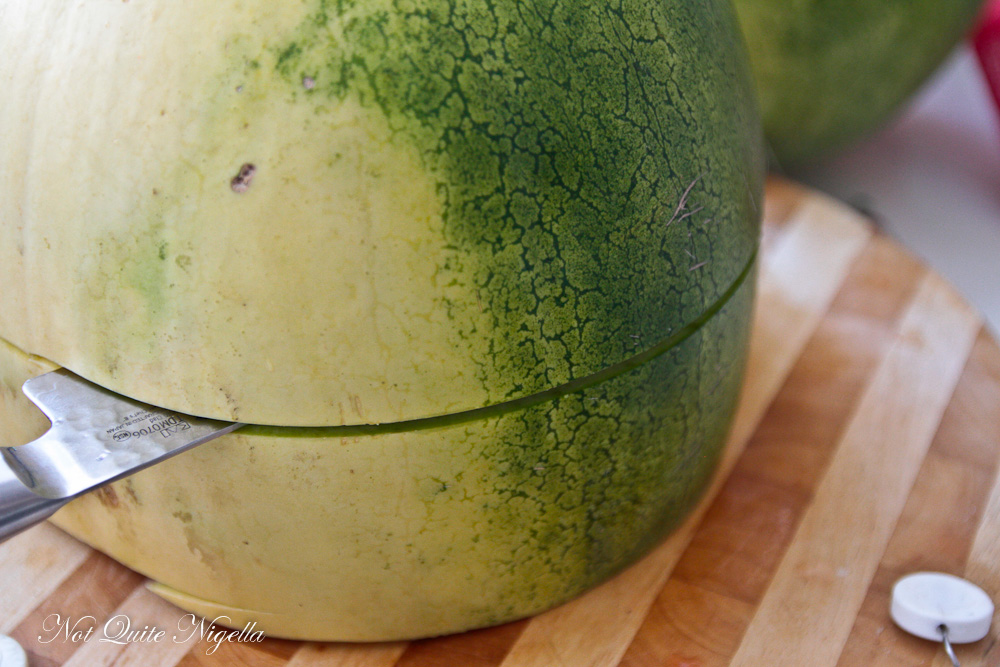 Step 1 - You don't have to buy a whole watermelon to do this unless you want a really tall cake. You just need to buy half a watermelon but this will not work with a quartered one because of the shape. Cut off both sides of the watermelon and you should have one piece as shown. 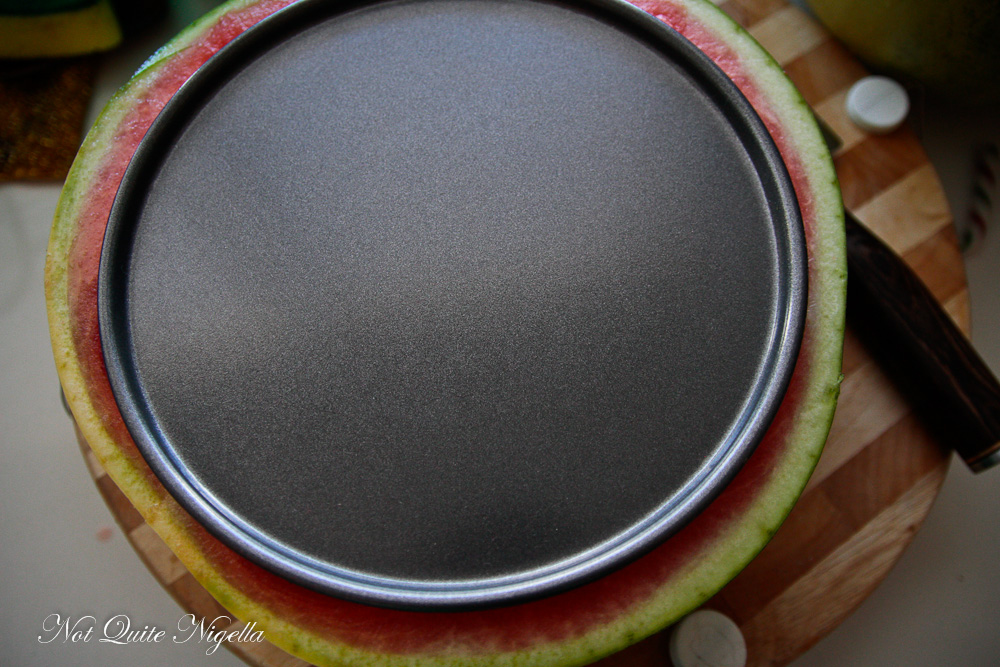 Step 2 - Using an 20cm/8inch baking tin or a plate as a guide, cut the green part away to make a round, high cake shape. Place on serving plate or stand amking sure to trim away any loose bits of watermelon. 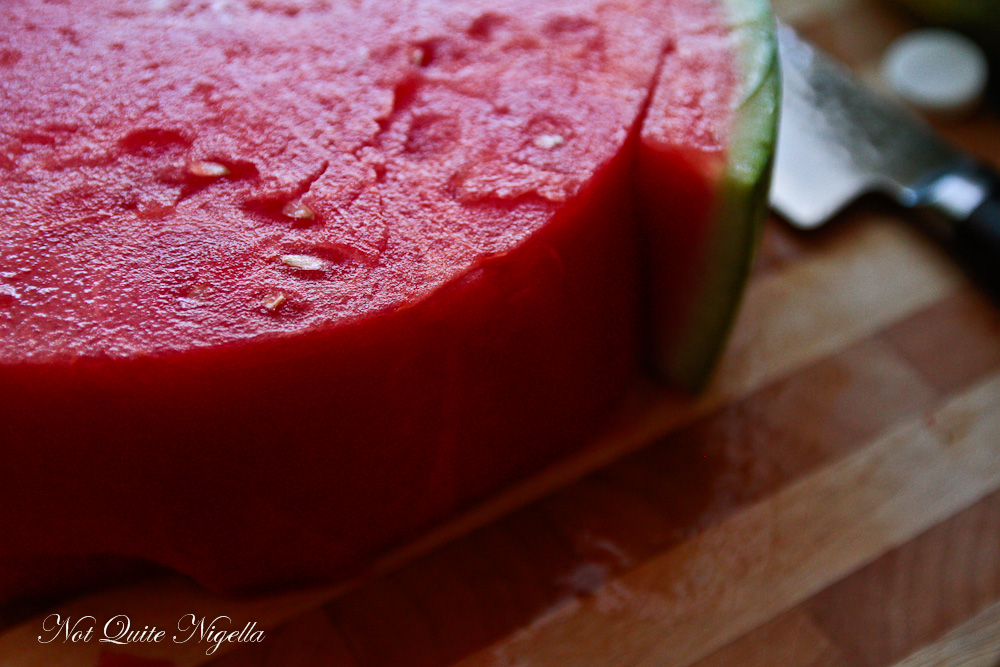 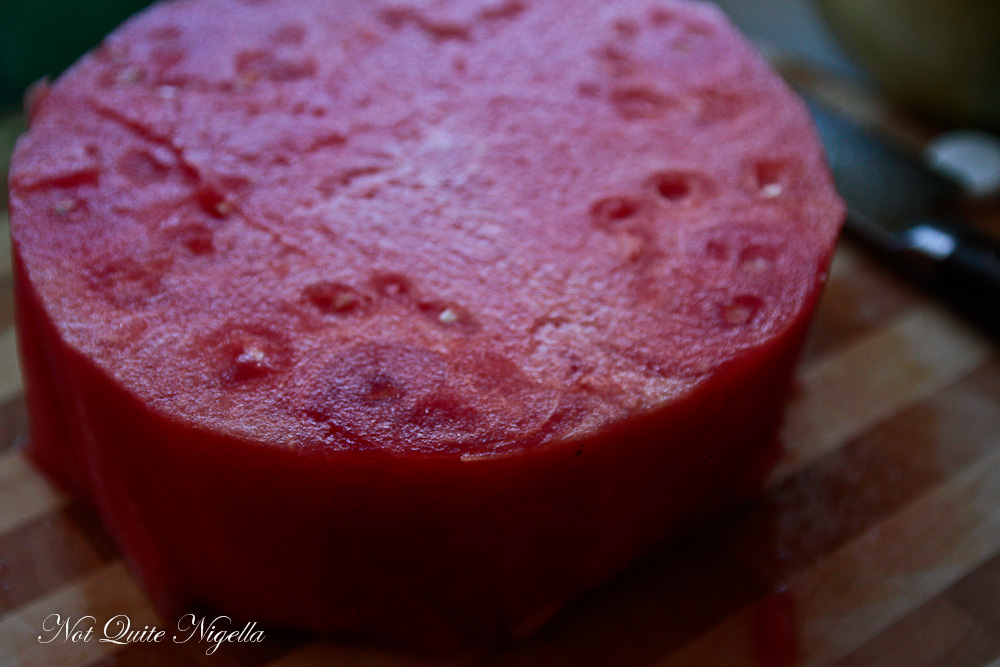 Step 3 - Whip the cream and sugar until soft peaks form. You can also whip chilled coconut cream using the same method. Using a palate knife, spread on the top and side of the "cake". Press the almonds onto the sides and then top with the blueberries and strawberries. 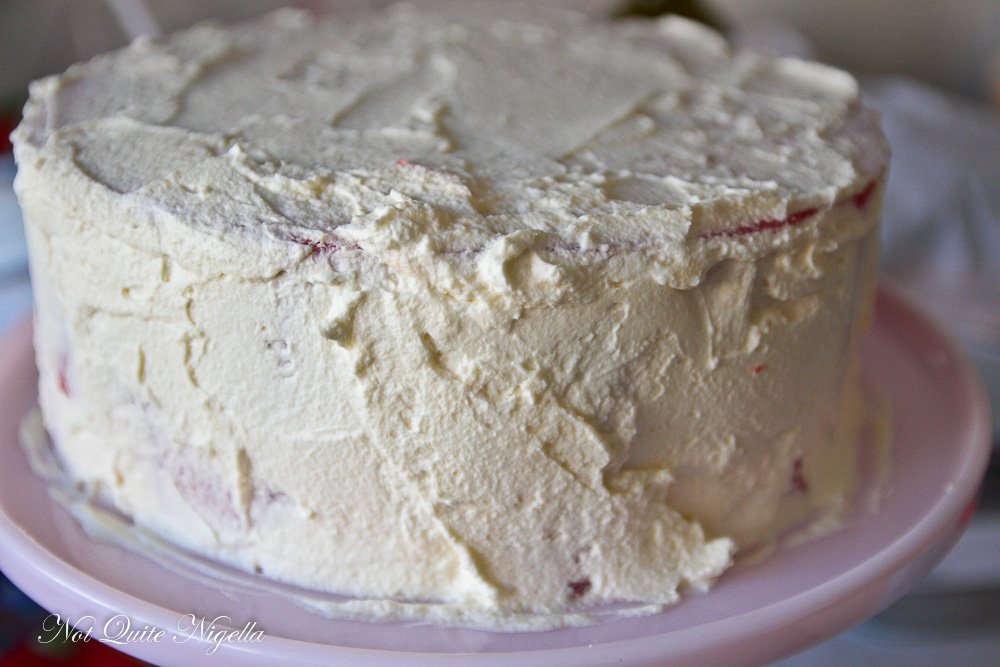