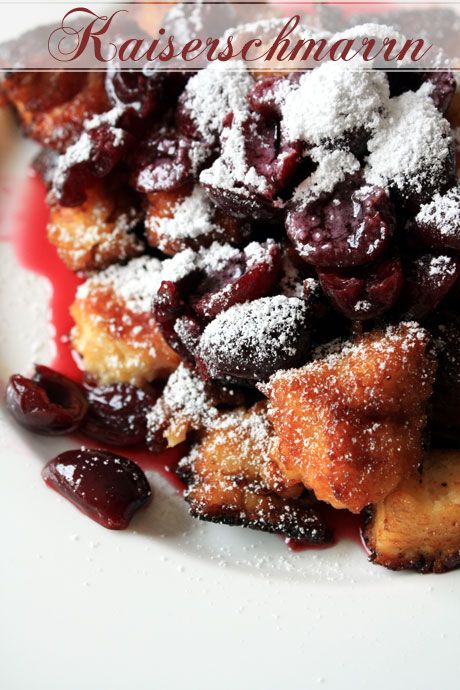 In my perfect world there would be a few things that would be de rigeur. Firstly daily massages would be on the agenda as would be a driver at my beck and call. I would have enough power and influence to commission non stop episodes of Dexter, Mad Men, 30 Rock and Glee so they would never go on hiatus and I would resurrect Arrested Development, the only show on tv to make me feel like I have a normal family. Shoes would never hurt, clothes would always fit and the sidewalk would be made of that wonderful spongy stuff that you find outside of pubs.

And I would never overcook or burn anything.

Sadly this isn't a perfect world and in my haste to perfectly caramelise these little babies, I may have gone just a leetle beet overboard with the caramelisation in parts. I should rewind and explain what these are. Kaiserschmarrn are Austrian pancake squares, where Kaiser of course means King and Schmarrn means "mish mash". I have become rather fiaxated on Austrian food ever since my trip to Austria. Of course like many things with a history, there are many legends about it and one of them has Elisabeth of Bavaria, the wife of Emperor Franz Joseph rejecting these when she was given them as they were too rich for her as she wanted to maintain her small waistline. So instead Emperor Franz Jospeh ate them after saying Now let me see what "Schmarrn" our chef has cooked up and liked them so much he finished both serves. 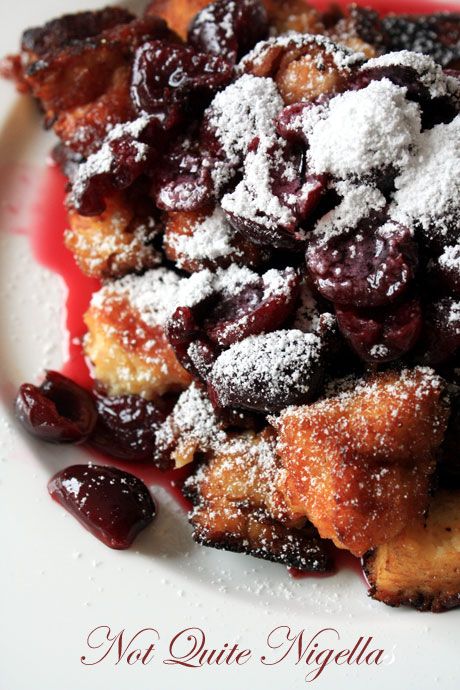 I know I'm hopeful suggesting that you get out the heavy equipment for breakfast but since you're probably on holidays, you may eat it like we did, for brunch. It is a bit of trouble with the cutting but it is a time saver in that the whole thing is cooked within about 10 minutes and you don't have to stand at the stove flipping pancake after pancake. 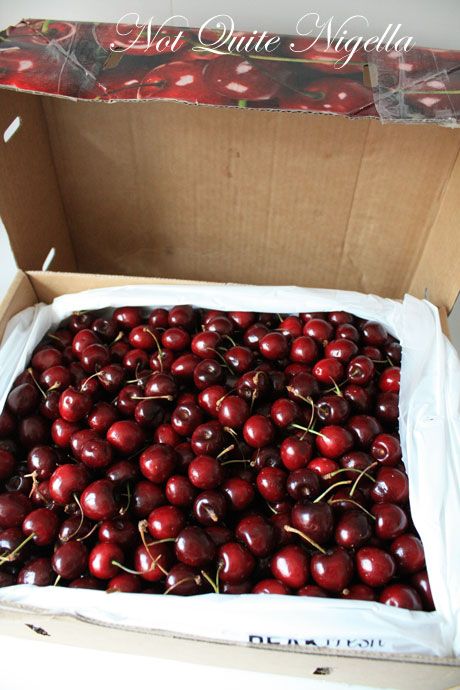 It's usually served with a plum compote but I was sent a wonderful 5kg box of delicious Young cherries from the Cherry Grower's of Australia and they were fabulously sweet, meaty and firm. I knew immediately that I wanted to use them for this dessert as I prefer cherries to plums. The pancakes were gorgeous and the entire lot which really could feed 3-4 was wolfed down in no time by Mr NQN and I. Even the over caramelised bits were not too overcooked so they gave it a caramel edge and the syrup from the compote was soaked up into the pancake give it an added sweetness. 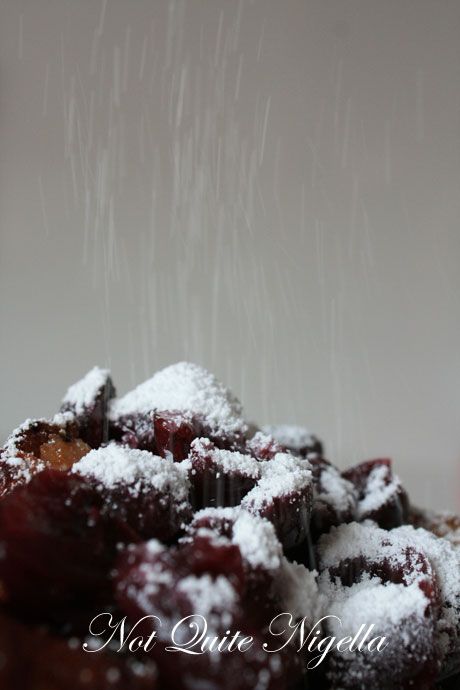 Of course Mr NQN and I ate a good 4.5 kilos of the fresh cherries. I will preface it by saying that we did share around our bounty with others and it was over the space of a week and not a day. After all I have a bit of the Elisabeth of  Bavaria in me too.

So tell me Dear Reader, does at least one of your New Year's Resolutions involve either getting fit or losing weight?

Step 1 - Make cherry compote first. Place all 3 ingredients in a small saucepan and heat on medium heat. Simmer for about 10 minutes stirring gently until the cherries are slightly cooked. 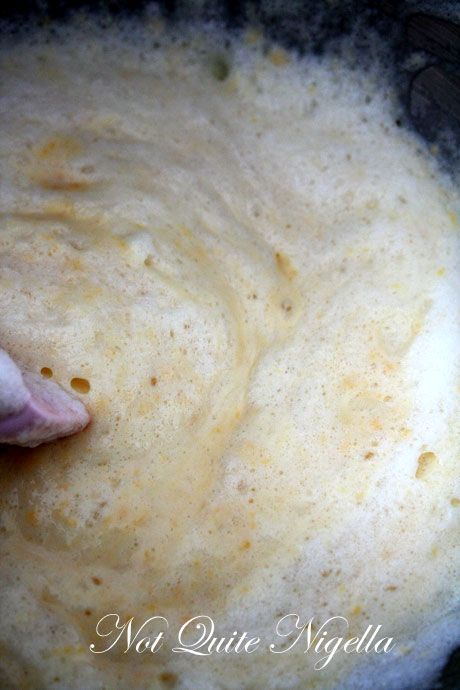 Step 2 - Preheat the oven to 220C/428F. Whisk the egg yolks, melted butter, milk and salt in a bowl. Add flour and mix together until combined. In the bowl of an electric mixer, whisk the egg whites and sugar until stiff but not dry. Fold the egg whites into the batter. 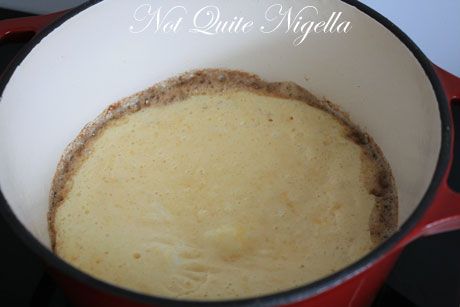 Prior to oven cooking

Step 3 - Using a pan that can be placed in the oven and can withstand cutting with a knife (I used a cast iron dutch oven but a rectangular or square one would be better for the little square pieces), heat on medium heat on the stovetop. When heated, place a pat of butter in the bottom of the pan and pour the pancake liquid in this. Place in oven for 5 minutes to puff up (keeping the stovetop warm as you will return this to the stovetop after it's had its 5 minutes in the oven. Have a knife ready to cut the pancake into squares. 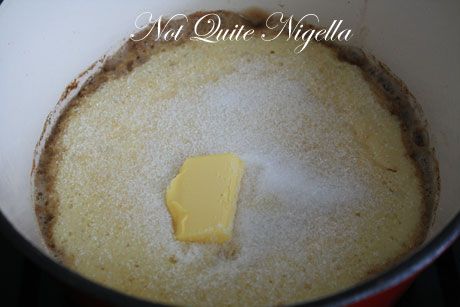 After 5 minutes in the oven, add butter and sugar

Step 4 - After 5 minutes, carefully remove it from the oven, keeping an oven mitt handy at all times as it will be very hot. Place another pat of butter on top and a spoonful of sugar and then flip over. Cook lightly but do not overcook and while it is cooking, cut into rectangles or squares. Add another pat of butter and some more sugar and then toss the pieces to brown and caramelise the edges of the pieces.

Step 5 - Divide pancake pieces onto plates and then spoon over cherry compote and dust with icing sugar. 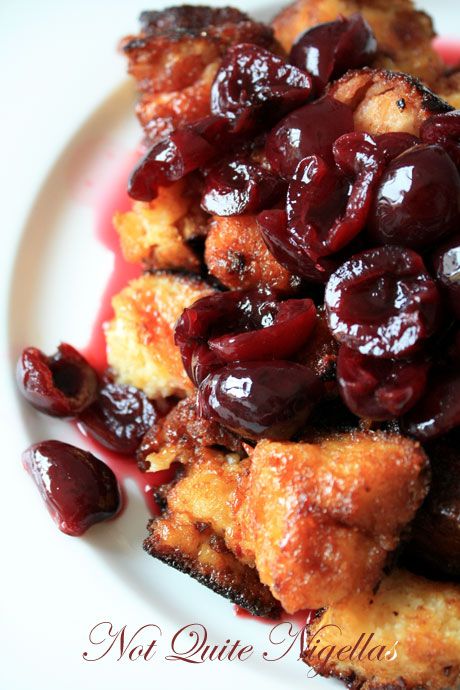