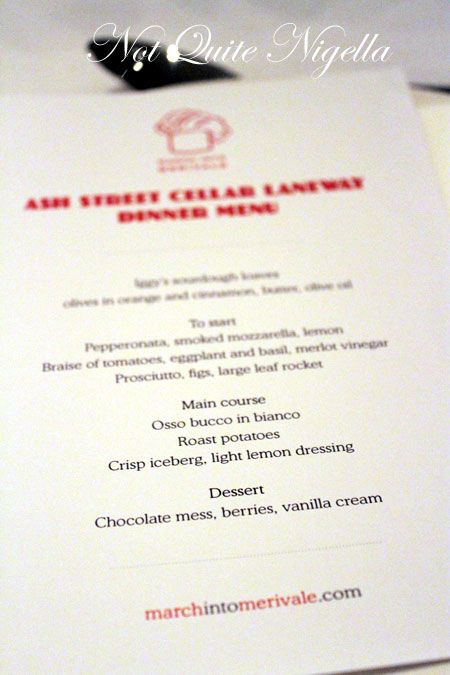 I look into the mirror and stare at myself, acutely alarmed. Somehow I've managed to give myself a Pirate look without trying - a look I try and avoid unless we're going to a dress up party. I know I'm running late to meet Christie but I know I'll be the laughingstock of the very chic Merivale Ivy complex, you know where impossibly thin and chic people congregate. I quickly remove the boots and the swashbuckling sword (ok I kid, there was no swashbuckling sword), regroup, redress and try to look less Pirate-y again. Mr NQN comes home from work and being the darling husband that he is, drives me there as the rain starts falling. Christie sends me a text that they've moved the dinner up to the third floor due to the rain. Breathless, I make it with one minute to spare. 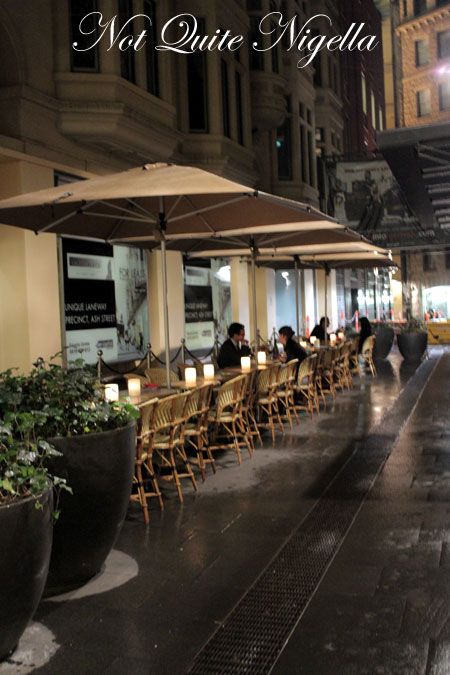 Where the dinner would have been held

Christie and I take our place on the long table which seats about 40 people. The laneway dinners can seat up to 100 people and at one end is a large party of twelve and the rest are groups of two to four to six. We take a look at the menu and it looks comprehensive and we assume that we get a choice of one of the entrees. We're offered red or white wine (the $60 tariff includes wines) and we also order some sparkling water. Before we know it, a large bowl of sourdough bread is set down in front of us as well as olives in orange and cinnamon, a large round of butter, olive oil and a creamy asparagus and feta dip. Everything tonight we're told is to be on platters and shared amongst six people. Lucky we have some friendly folk near us! 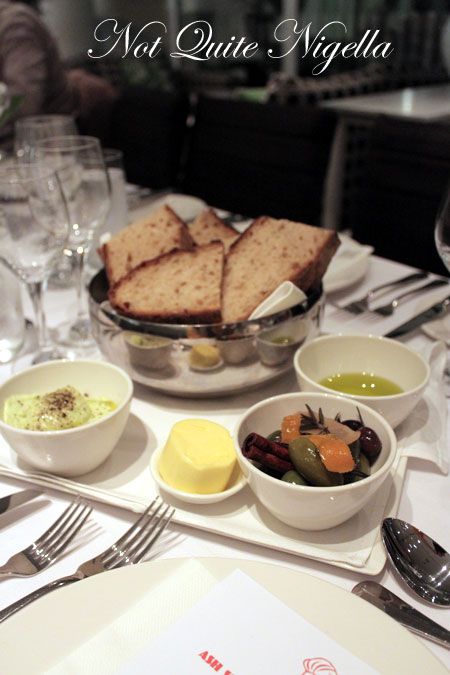 The Iggy's sourdough bread is lovely and crunchy on the outside and soft on the inside and I love the olive oil that it's served with. The dip is interesting - it's creamy with a slight saltiness from the feta but not too much. We ask the waiter what is in it and he comes back a couple of times as he has a temporary memory loss and the best we can ascertain from him is that there is asparagus and feta and possibly avocado. I don't really go for the cinnamon olives - they're a bit too close to a baked good. 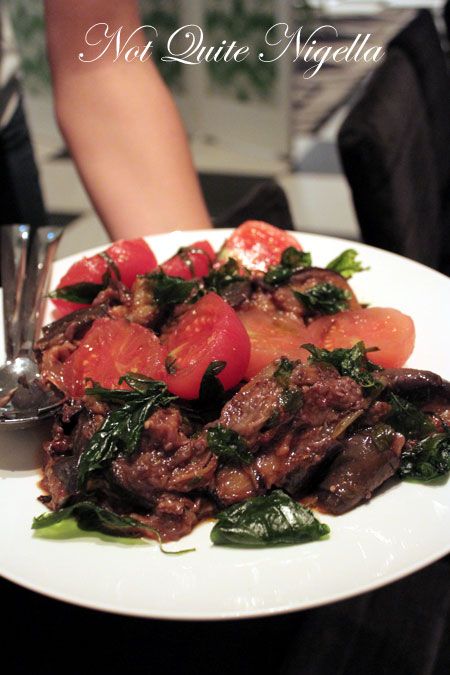 What we thought would be an option for the entrees we quickly learn is not the case and we get all three dishes. Three huge platters of food come out and we help ourselves to the first dish. I put some of this soft eggplant on top of my sourdough as it's thick and rich. I've possibly been too ambitious taking the amount that I have but it's good and not too vinegary, a nice balance of flavours and is similar to a caponata but not cut up into cubes. 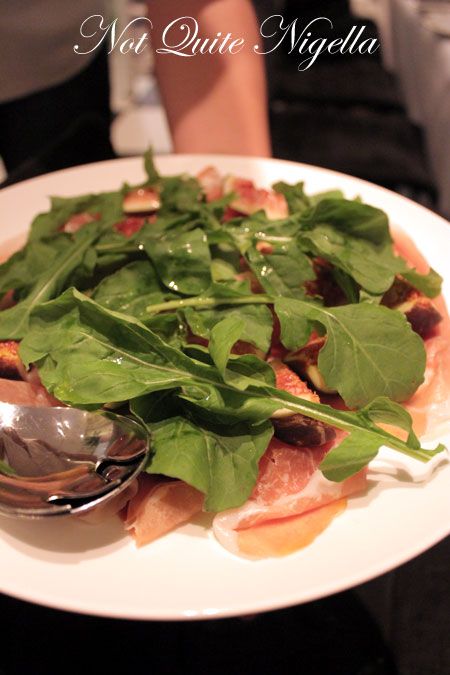 If there's something that I just love it's figs and proscuitto and it's delicious with the salty proscuitto and sweet, plump figs. The large leaf pepper rocket is good too and adds another dimension beyond the sweet and salty. 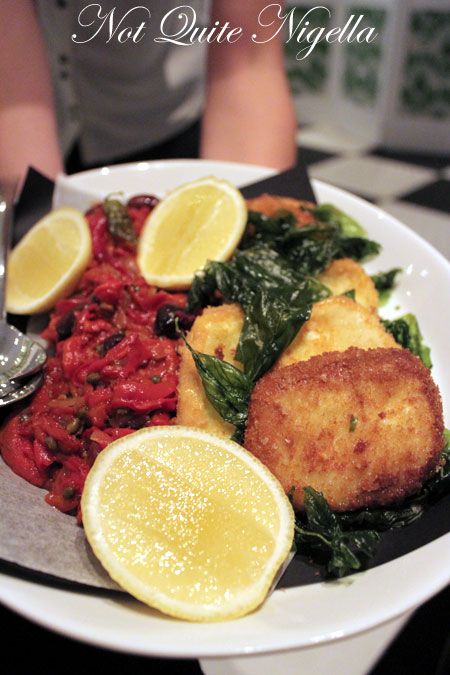 I adore this dish and I go back for seconds. The deep fried and crumbed mozarella pieces remind me of halloumi, a cheese I am addicted to and it's paired beautifully with the pepperonota and a squeeze of lemon and deep fried basil leaves. 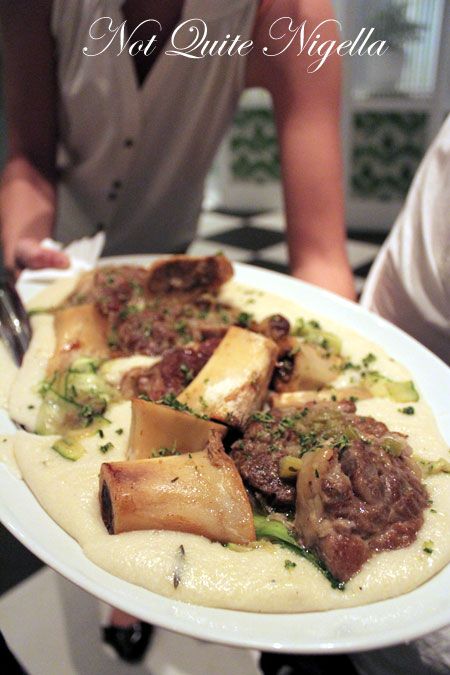 Osso Bucco in bianco with semolina

The platter of this is huge and we hold the gigantic platters for each other-it helps at these dinners if you have nice folk next to you that will hold the platters for you while you take the reigns of the serving forks and spoons as there's not a great deal of space on the tables for the platters. There is a bit of minor debate, they tell us that it is fine polenta but we're absolutely convinced it is semolina. The Osso Bucco is soft and tender but a touch bland particularly with the semolina which is simply creamed and is a contrast after the flavoursome entrees and to be fair, we were all quite full after the entrees. Still I enjoy scraping out the jiggly marrow and mixing that with the meat which gives it more flavour. Christie and I lament not bringing the boys along as the amount of food would have meant we would have had two very full and happy gentlemen. 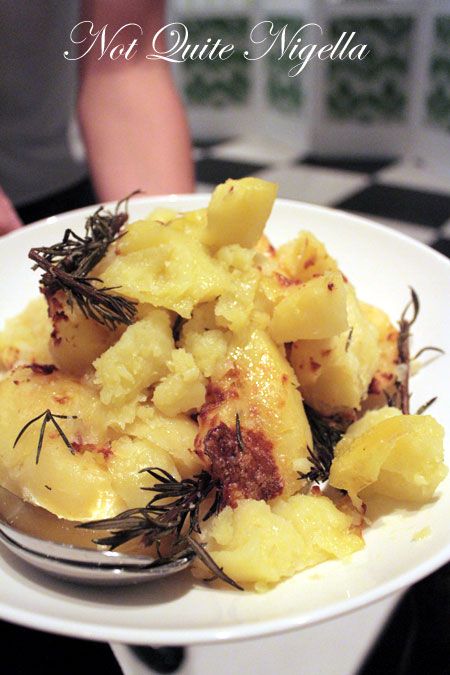 I try a bit of these and I wish that they were browned to a crisp a bit more. 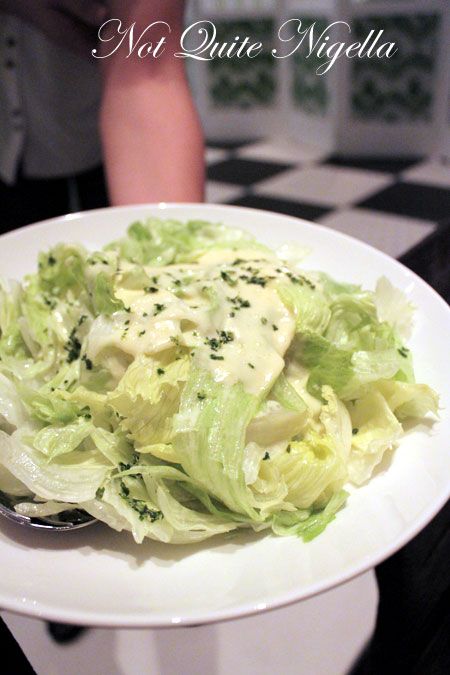 Not particularly crisp, the iceberg lettuce is dressed in a creamy lemon dressing. 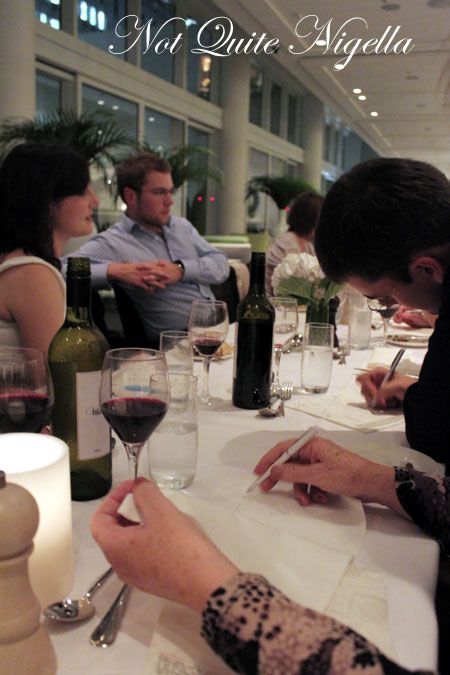 In between dessert some of us attend to the task at hand-there's a drawing competition where someone can win a night at the Establishment as well as dinner for two and all sorts of other goodies. The only problem? I can't draw :( 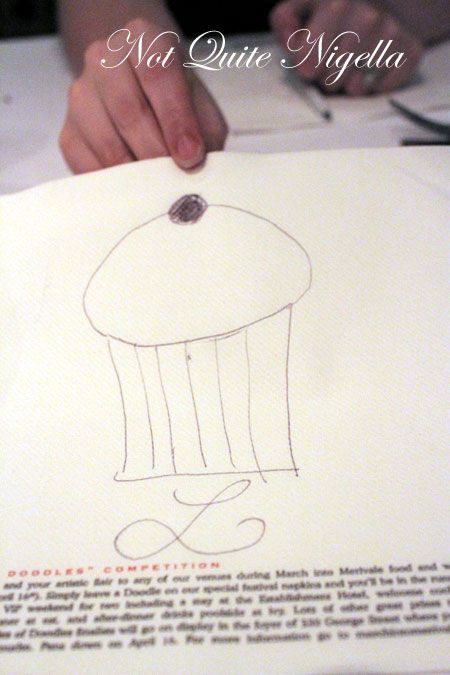 Please tell me you see a cupcake... 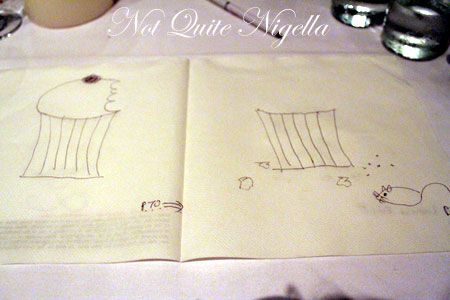 That is getting eaten and eaten by a hungry mouse... 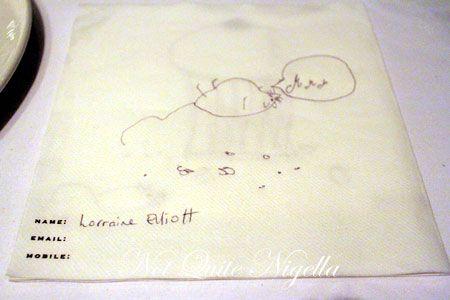 ...and who lies back stuffed full of cupcake (he's not dead!)

I do the only thing I can draw, a cupcake (and a plain one at that) and they woman sitting next to me suggests drawing a four part story image of a mouse eating the cupcake. I sneak in a little "Merivale" touch by using their signature M-after all aren't we always told in meetings to work in the brand? ;) I won't be holding my breath to win this though especially after I saw the other entries  :P 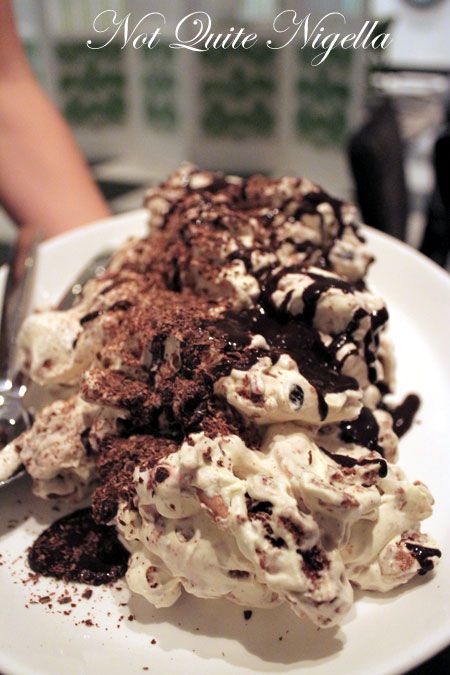 Another huge platter arrives and it's a version of the famous Eton Mess dessert where meringues are smashed up and mixed with whipped cream. This "mess" is also mixed with soft mixed berries and chocolate shavings, chocolate sauce and the meringue inside is chocolate. I make great inroads with this as I do love meringues and cream.

As we leave we lament not bringing the hungrier menfolk. It's a dinner we find would really suit a large group of friends who love wine, communal food and sharing.

So tell me Dear Reader, are you often late for appointments because of your outfit?

Pop Up Lane Way Dinner at The Ivy 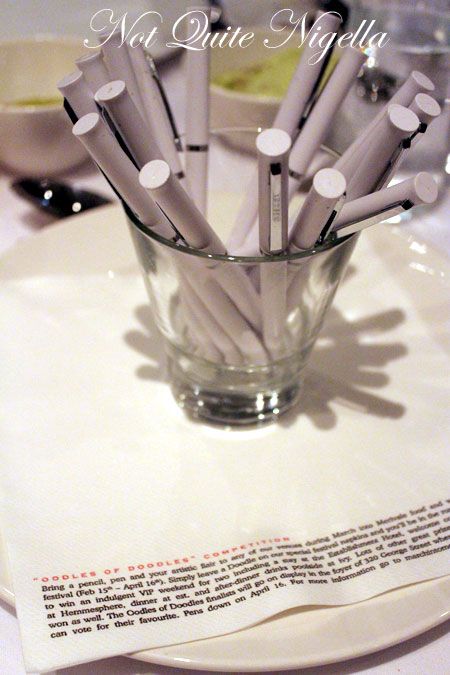