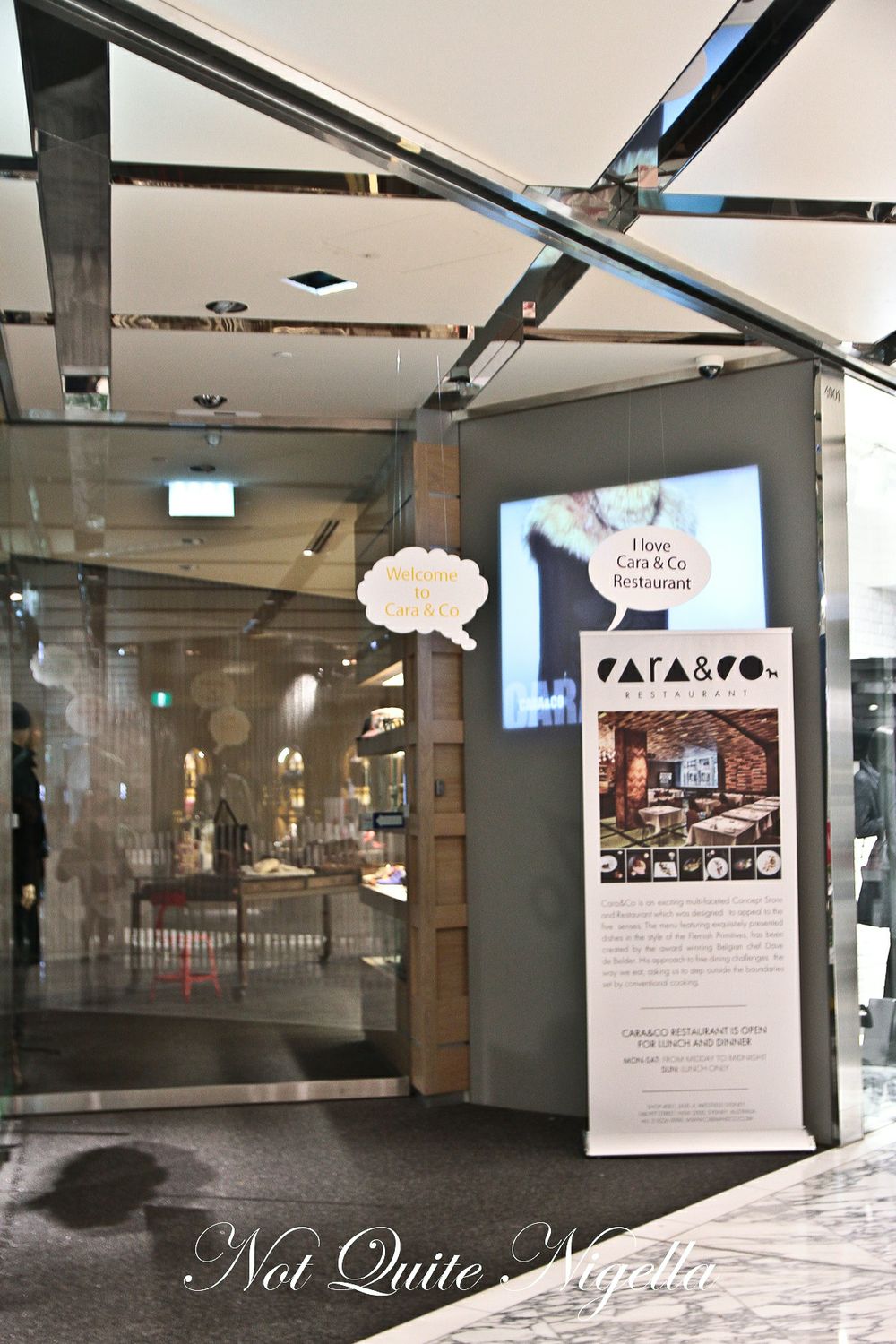 Like Alice in Wonderland, I often feel lost and in a strange world whenever I step foot in the city Westfield. In order for me to find a shop or restaurant, I need clear instructions on how to get there and I follow the trail of breadcrumbs or shops and hopefully arrive at my destination. So when the call was made to me to confirm my reservation, a very polite voice added some instructions on how to get there easily. 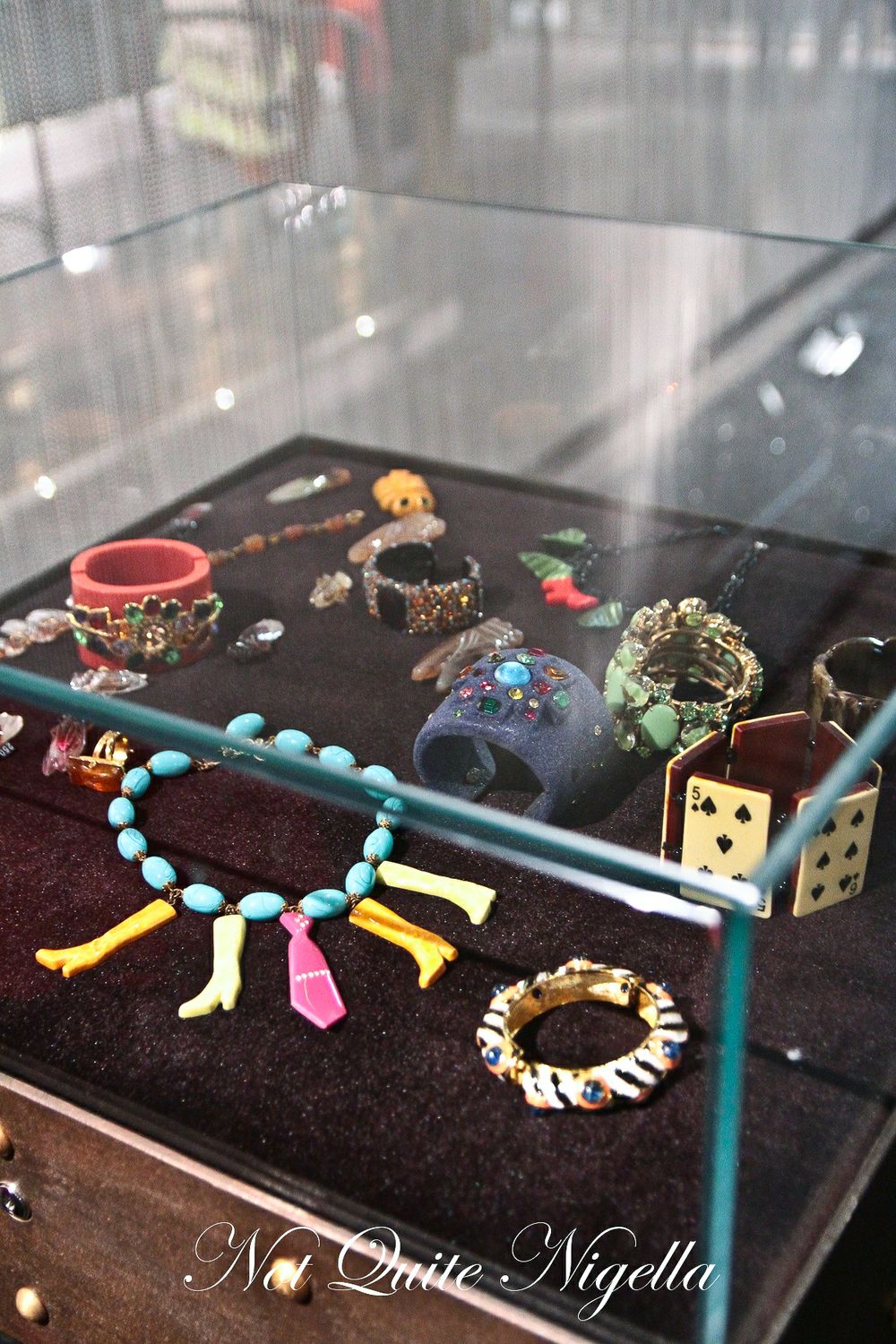 This evening I'm catching up with friends Liss and Corrie for dinner at Cara & Co, a designer concept store that also has a restaurant attached to it. Started by Russian born Australian Rosalia Alpert, the first boutique was a Cara & Co in Moscow and this is the second store. Next year, there will be a Cara & Co in Beijing. The shop itself is filled with covetable designer items with a "no logo fashion only" policy and if there's something that excites me, it's the ability to shop and eat at the same time. The merchandise in the store is 70% exclusive to Australia and about 95% of items are exclusive to Sydney. Oh and who is the Cara from the name? Cara is the name of Rosalia's Airedale terrier, whom she says "I doubt she had any sense of fashion." 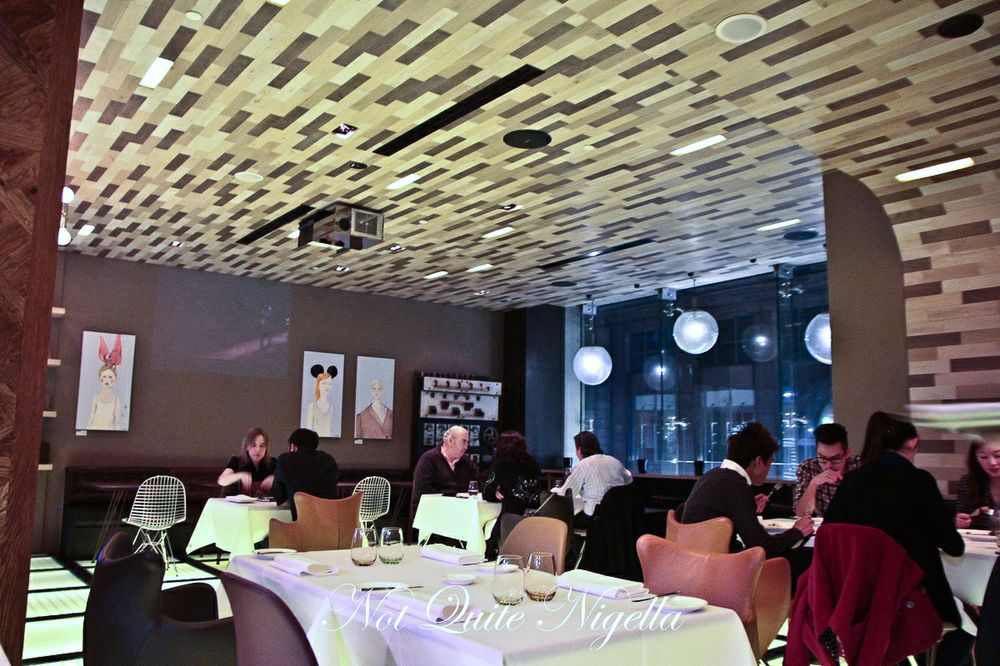 Belgium chef Dave De Belder from the Flemish Primitives Group creates the menu and his team from overseas that have been brought over here executes it. The dishes that are turned out are explained in the menu by ingredient only and are extraordinarily pretty, as you would expect for a designer concept store. Televisions on the wall show fashion runway parades and this Saturday evening has the restaurant at about a third to a half capacity. 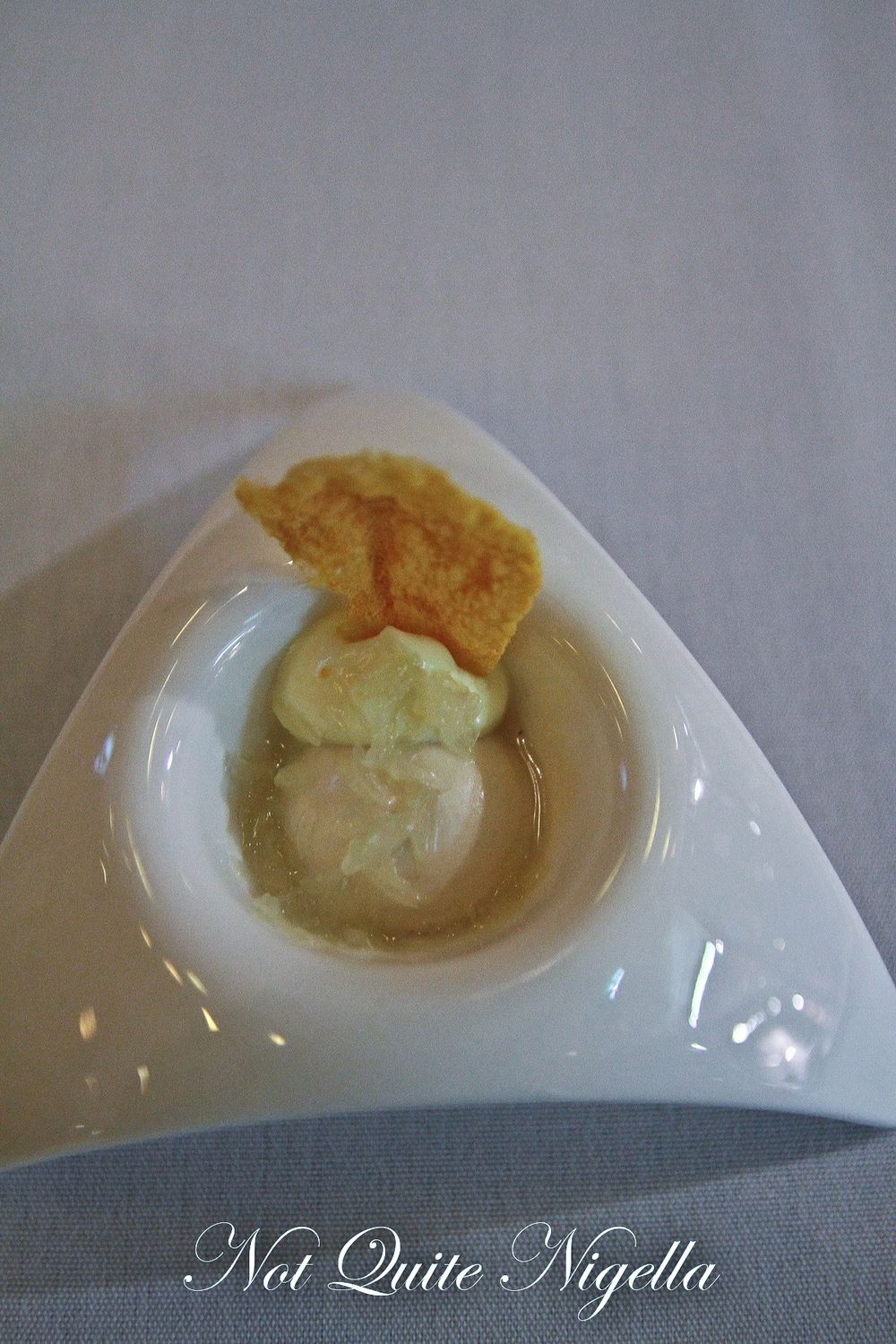 We start with an amuse bouche. It is a squirt of tuna mousse, quite firm in texture like a cheesecake, with a slightly sweet curry sauce, nitrogen lime and a pumpkin crisp. 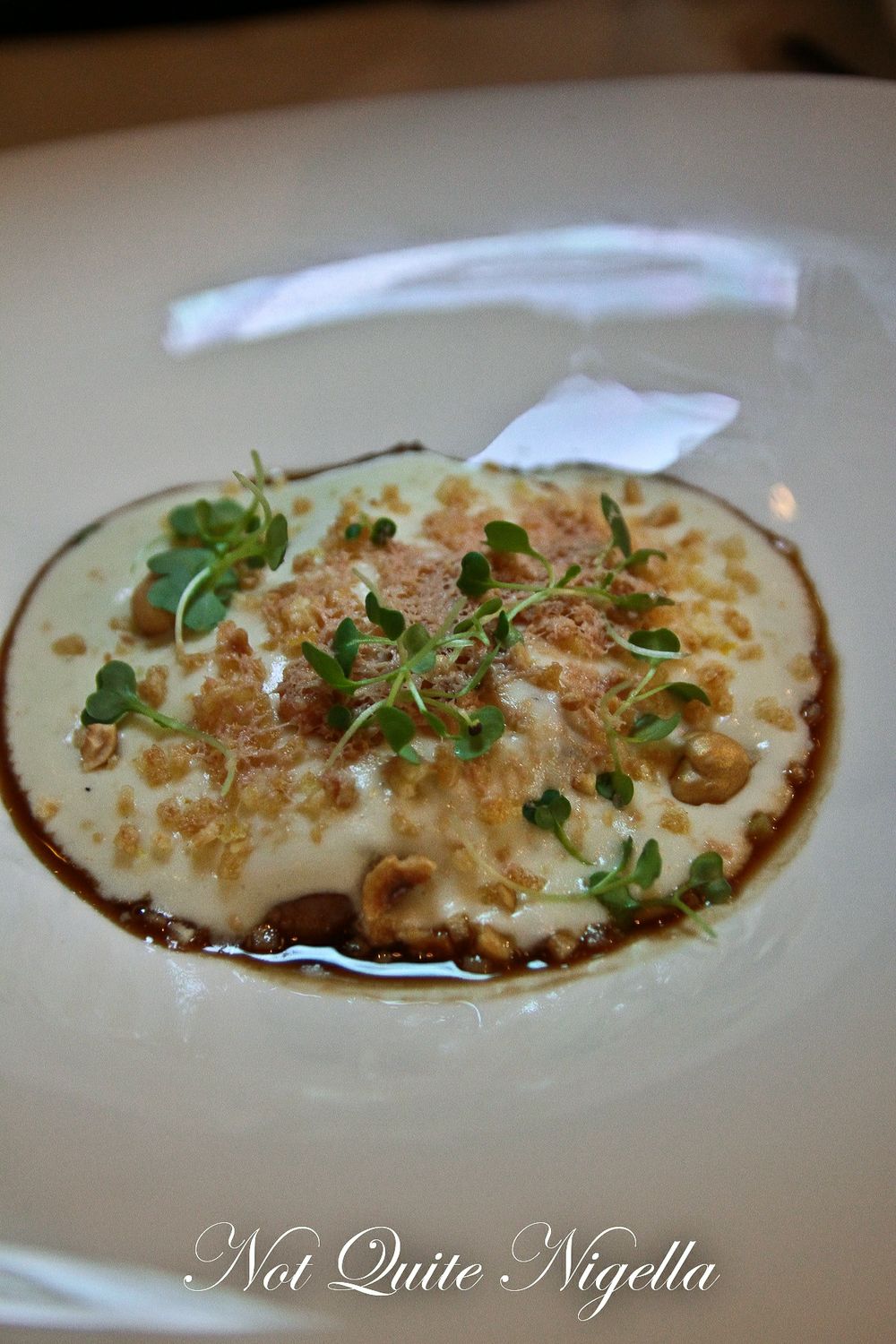 Curious about a chicken oyster, at first we thought it was a chicken dish paired with oysters. However the chicken oyster is a little piece of meat that is lodged to the side just near the thigh of the chicken. There are two per chicken and they are little soft, dark meat treasures. This is a version where they're blanketed in layers. First the pan fried chicken oysters are glazed in a  Belgian beer sauce with an oxtail jus base, a layer fluffy potato foam, then there are whole toasted hazelnuts and chopped hazelnuts, foie gras and coffee and pickled cucumber. It was good although I did find that it had such strong flavours that I wasn't sure what each element was and each mouthful yielded several strong flavours in one. The chicken oysters, and I think there were 5-6 of these little morsels were soft and delicious. 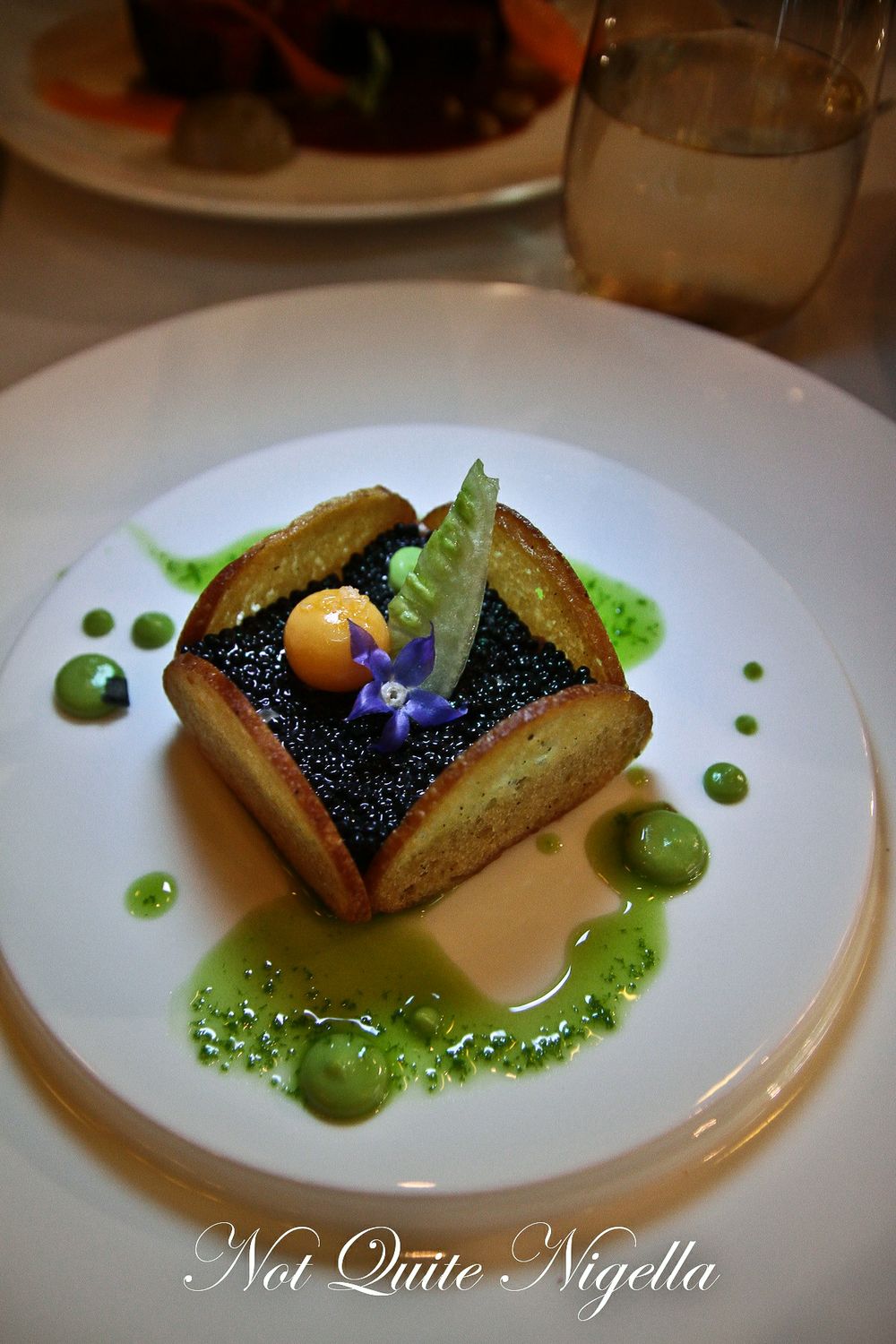 I adore beef tartare and always order it if I see it on a menu. The finely chopped Rangers Valley grass fed beef was topped with a layer of Avruga caviar, a 20 degree quail egg yolk that was creamy and thick. It is bordered by crunchy sourdough crisps and a sweet pea puree, chive mayonnaise and a chive oil was added at the table to bring together the savoury elements. And if you've ever wondered how you could make beef tartare better, it really is by adding caviar to it as the saltiness is a natural partner. 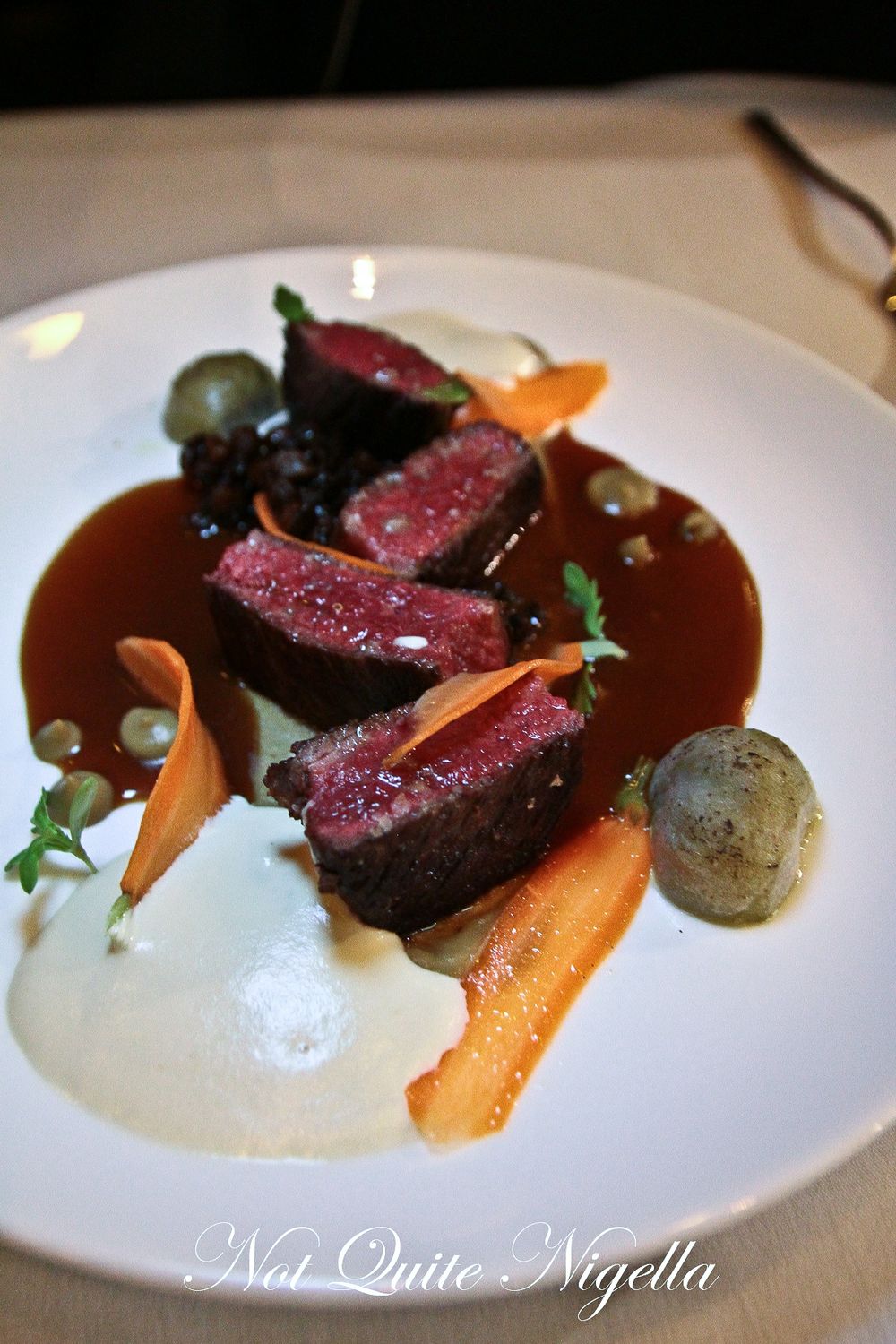 I tried some of Liss's Ranger's Valley grass fed grilled wagyu rump, which was served with small nuggets of wagyu bacon from the rump cap, eggplant and miso puree, carrot puree, baby Thai eggplant and anchovy foam. The miso gave an almost livery flavour to the succulent wagyu. 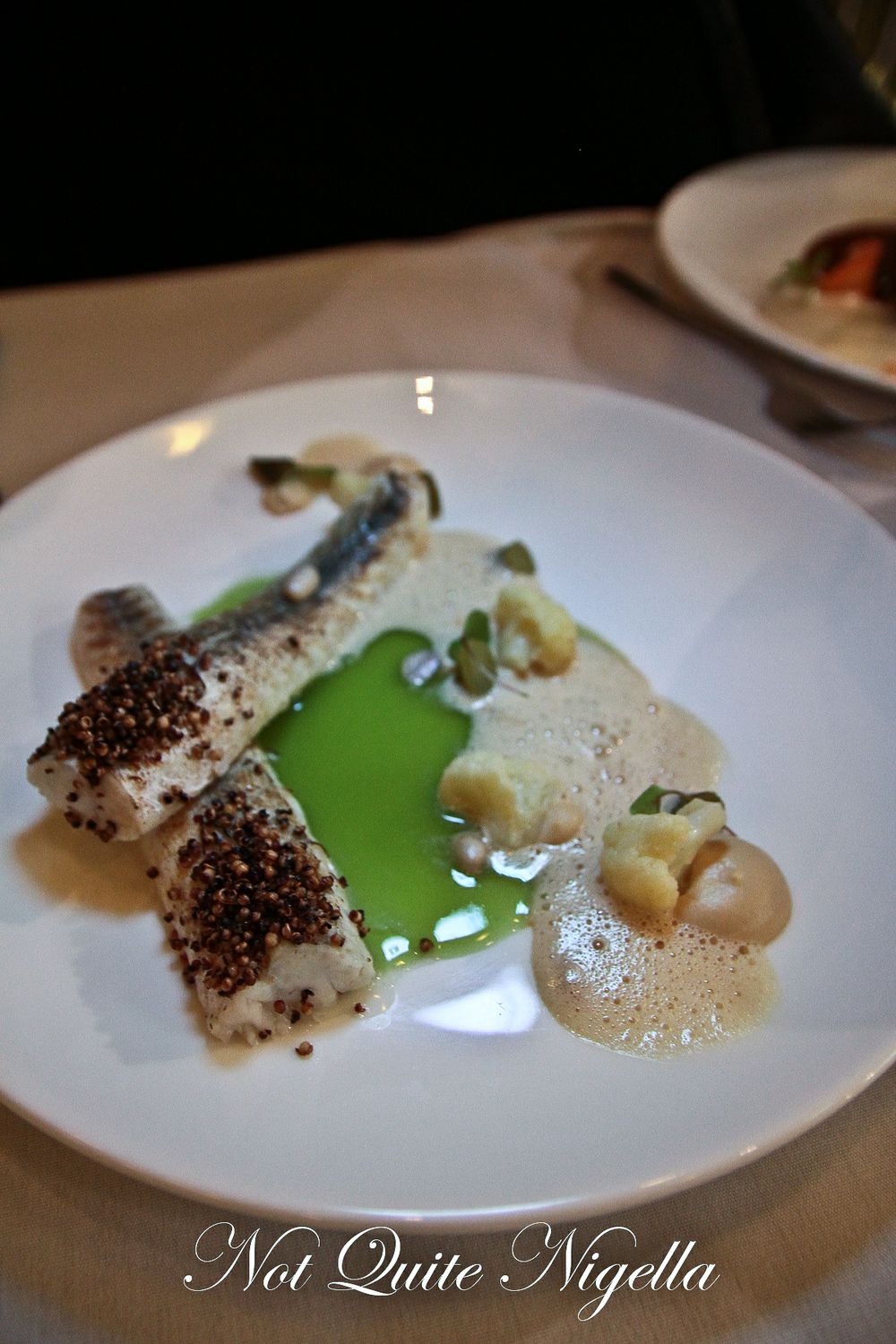 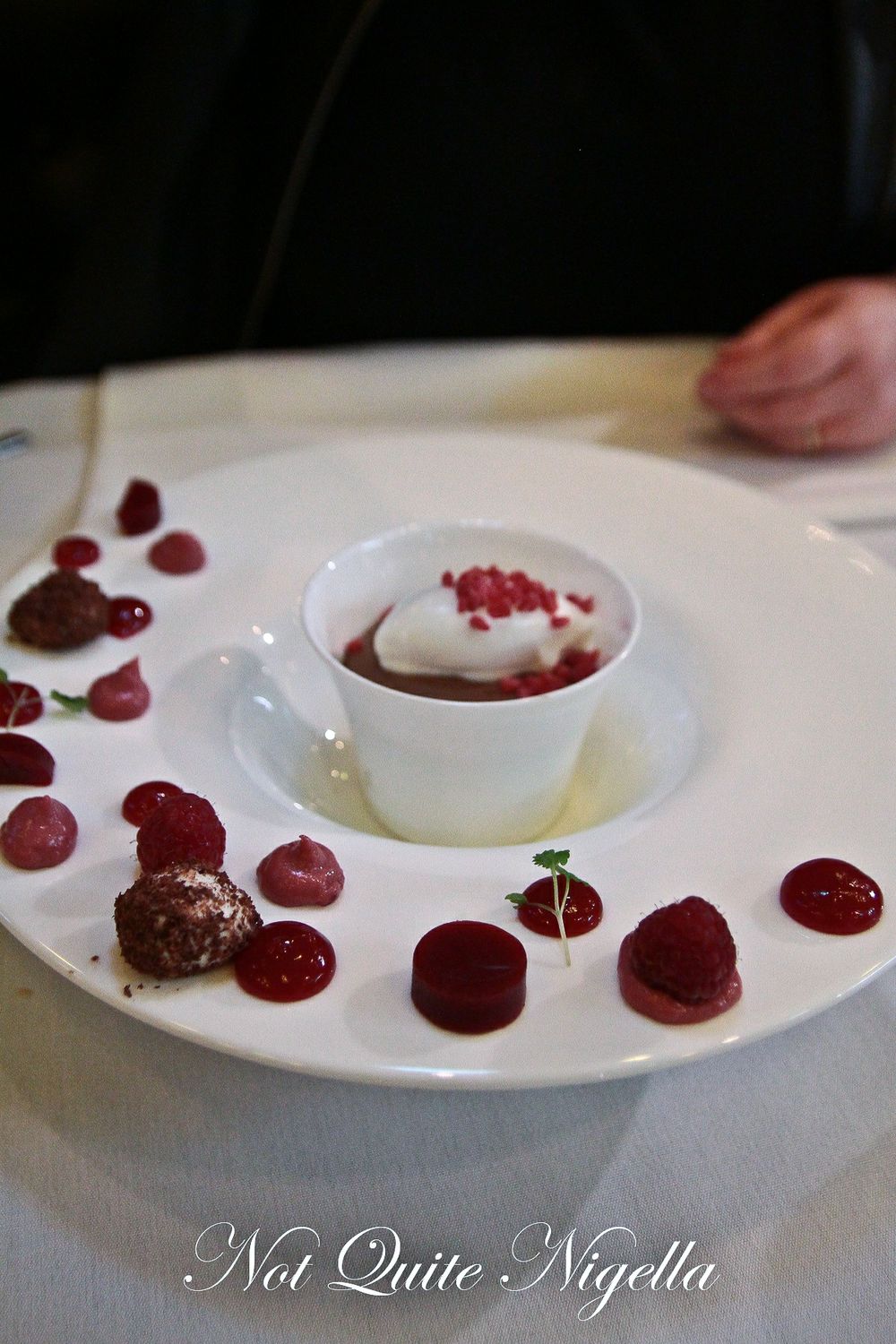 We all had dessert on the radar and Liss and Corrie both chose the dark chocolate cake which had a light, moussey texture combined with a rich dark chocolate flavour. It's hard to describe, it doesn't taste like a dark chocolate mousse, it tastes like a rich, dark chocolate fondant but has a mousse texture. It is paired with five different treatments of raspberries from coulis, yoghurt, fresh, nitrogen and gel discs. There is also a light as air coconut marshmallow and a scoop of ginger and lime sorbet with tiny pieces of freeze dried raspberry on top. 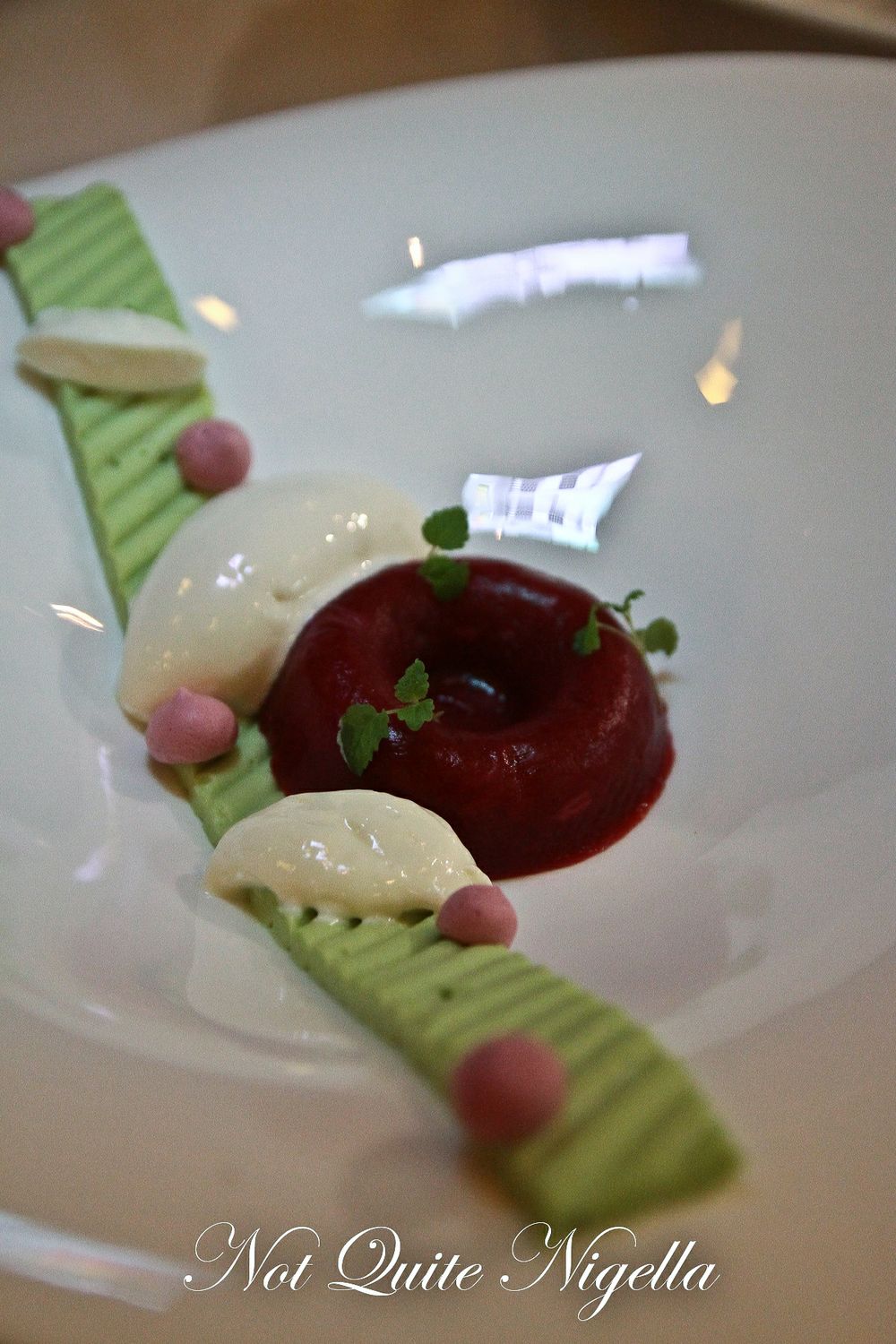 My choice was the rhubarb dessert that consisted of a tangy but sweet rhubarb compote with a raspberry jus set in a disc. It was accompanied with a light green white chocolate and basil cream stripe, tiny light raspberry "macarons", a white chocolate and yuzu ice cream, limoncello yogurt and a hint of tangy yuzu fruit to lift it. It's a tangy dessert whilst the dark chocolate cake is more for sweet tooths. 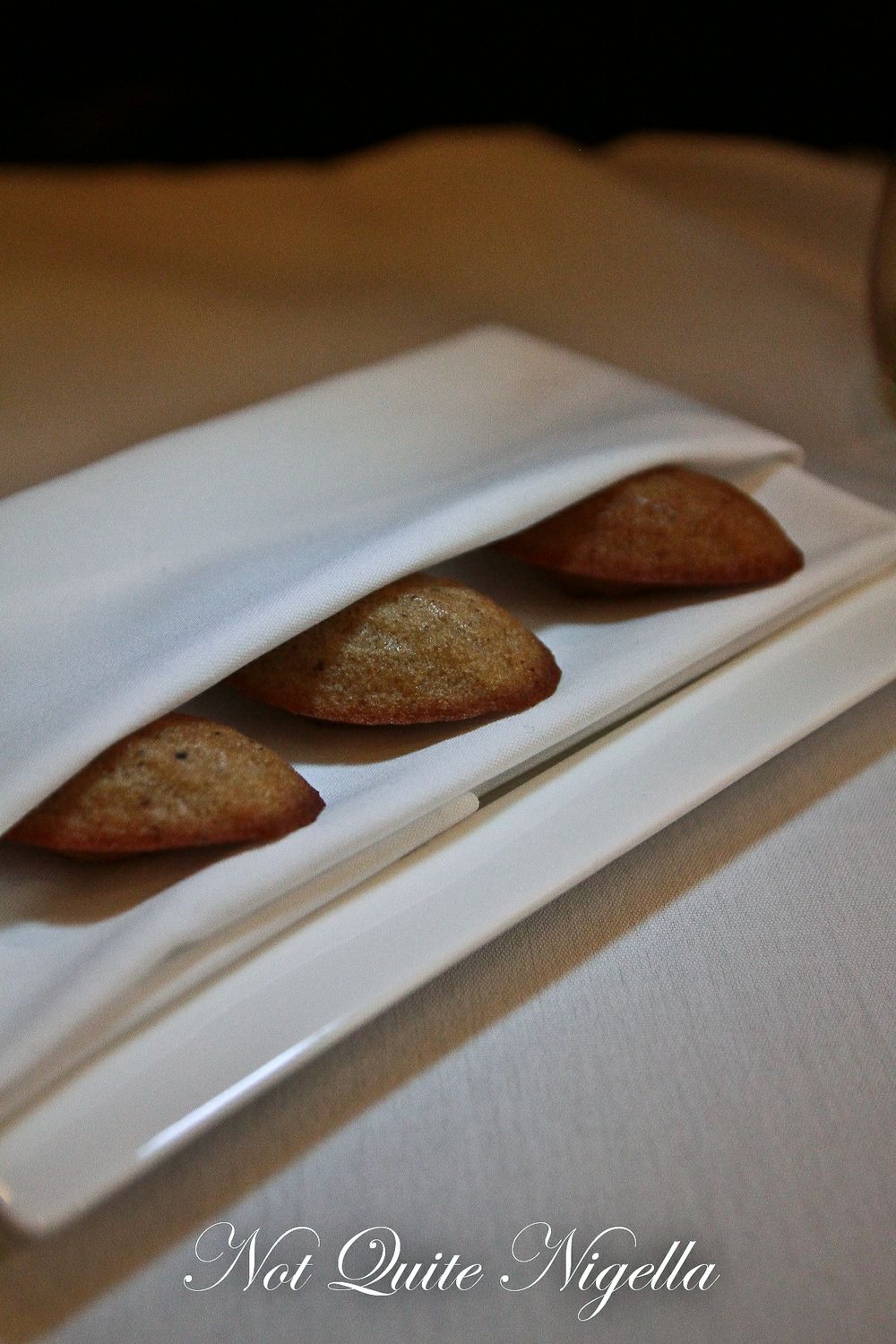 And last as we get our bill are the tonka bean madeleines which come out warm and aromatic. The texture is slightly different from other madeleines-they're slightly stickier with almost a crunch to the edges but the warm baked texture is hard to resist. Warmed in our tummies, we're out just in time to catch "Jeff Who Lives At Home" which is part of the Sydney Film Festival. 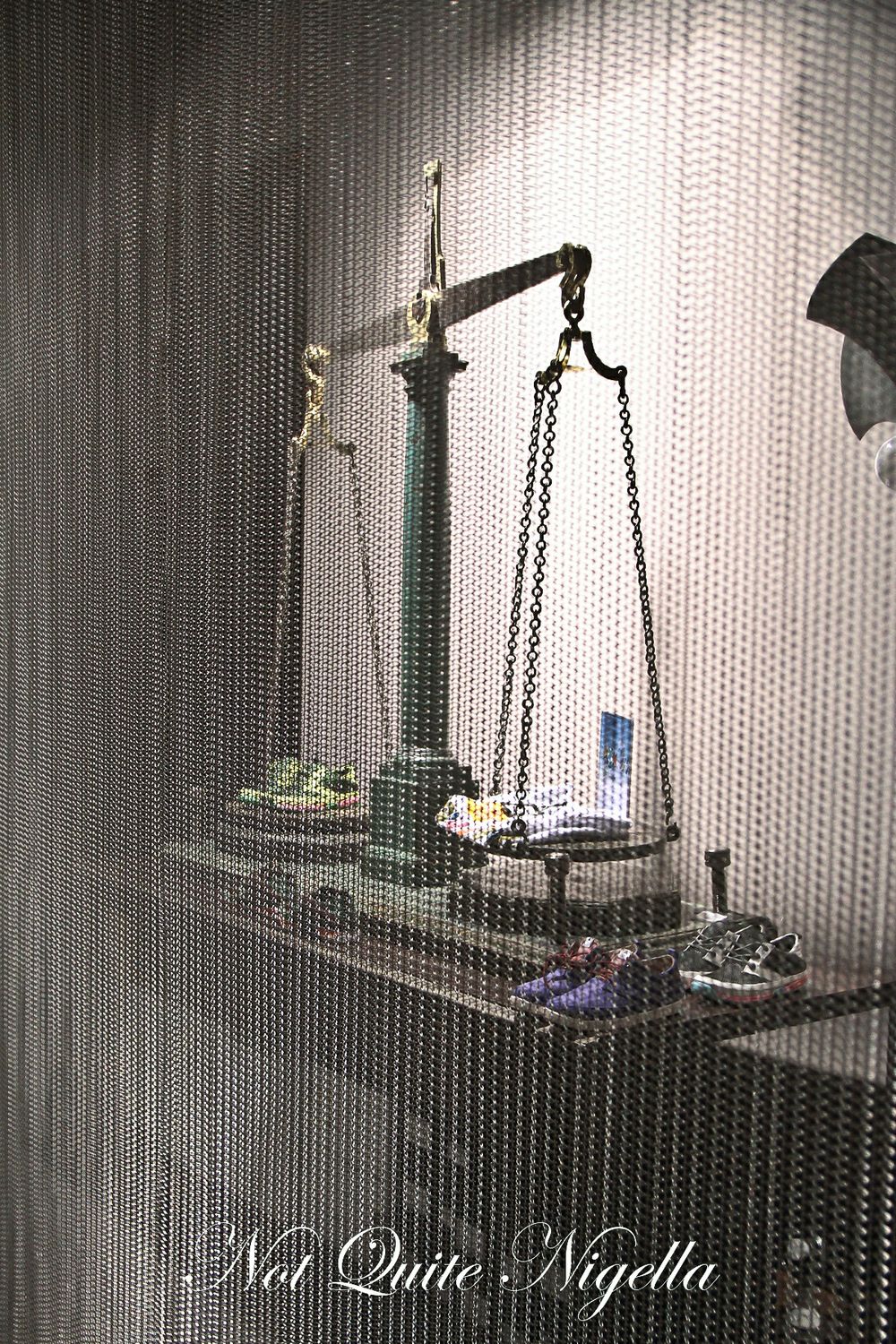 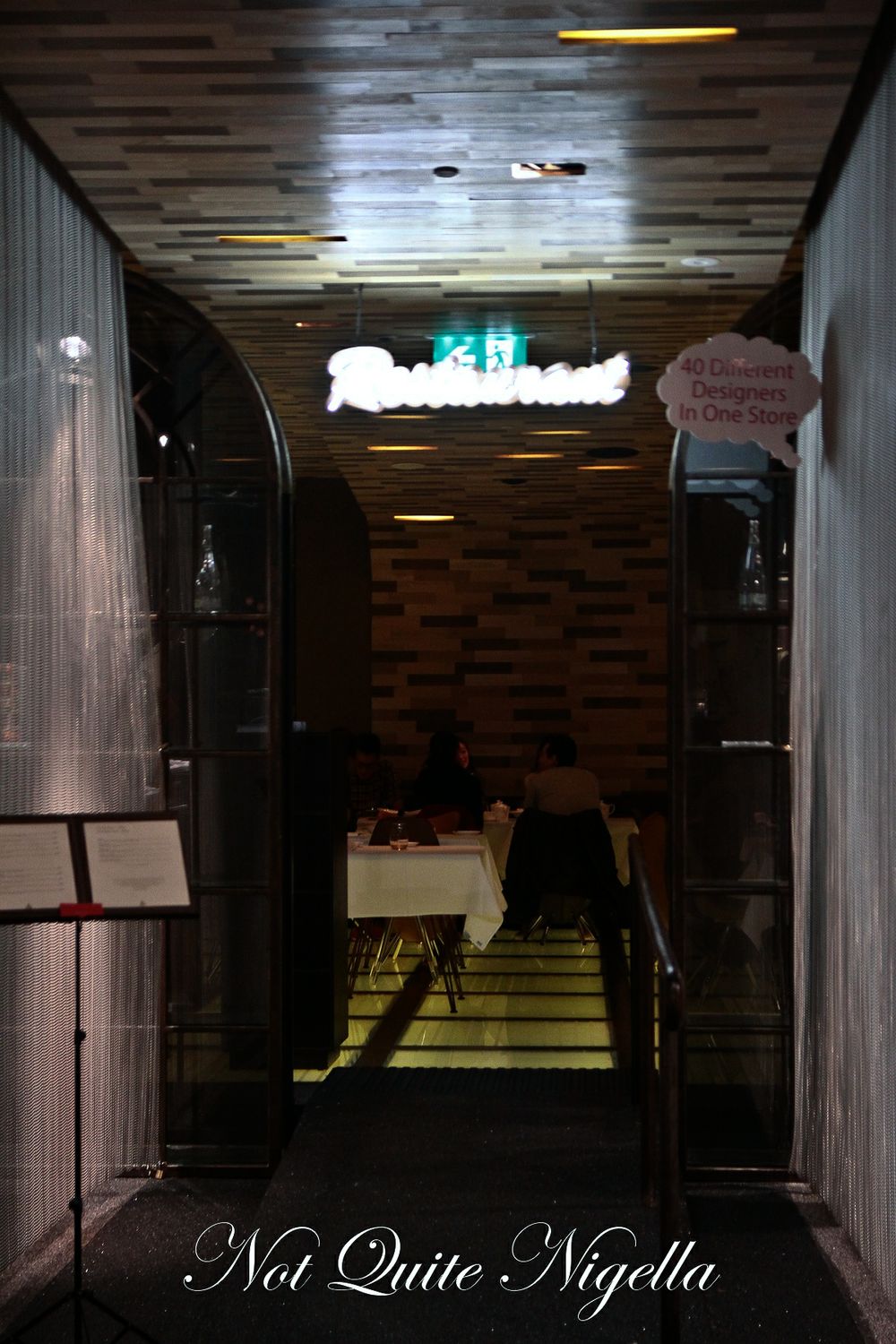