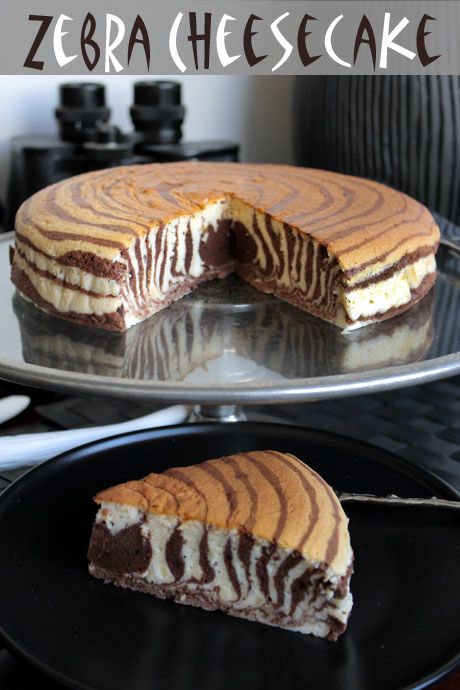 You know the story - girl meets recipe and falls in love after seeing recipe across the crowded internet. The recipe looks a bit different from what she is used to so girl is instantly intrigued. After the first tempting glimpse, girl can't get recipe out of her mind. Recipe even features in girl's dream that evening. Girl wakes up, thanks the gods of culinary fate that she has the ingredients to make that recipe and so begins the love story of the girl who met a Zebra cake. 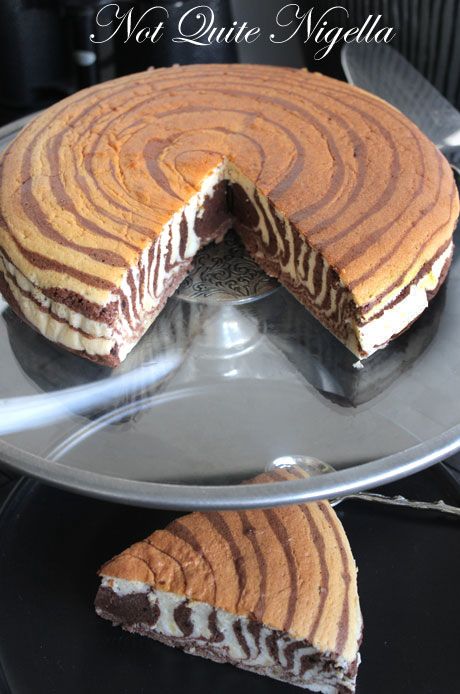 Tuty's lovely blog Scent of Spice was the blog that first introduced me to this amazing Zebra cake. It was one of those cakes that was intriguing from the very beginning. I had assumed that there was some intricate skewer work involved in obtaining the zebra pattern. Instead the method was even more fascinating and involved repeatedly dropping three tablespoons of batter in a circle alternating with cream and chocolate batter to somehow miraculously produce this gorgeous striped Zebra effect. It was one of those things that the original recipe creator AZ Cookbook said "PLEASE USE THE FOLLOWING RECIPE WITH CONFIDENCE! ITS BEEN TESTED AND TRIED BY YOURS TRULY MANY TIME NOW TO GUARANTEE AMAZING RESULTS! ANY QUESTIONS, PLEASE EMAIL ME!". Ok I had to have faith, after all. 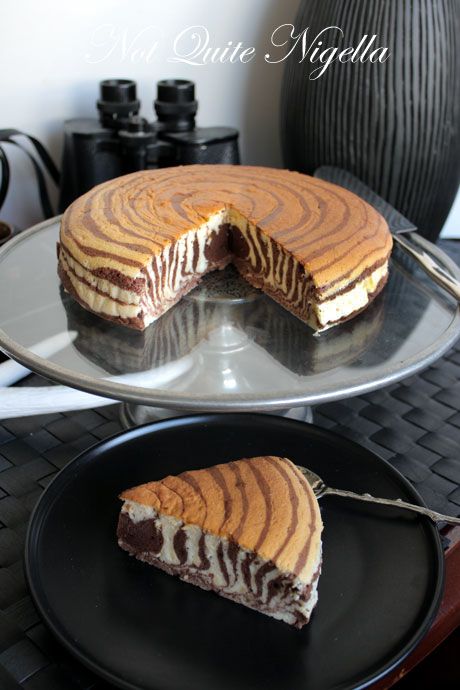 The original recipe was for a regular buttercake which I had all of the ingredients for but I wanted to make it as a cheesecake. I only had a single 250gram tub of cream cheese in the fridge (for emergency cream cheese frosting making) which was absolutely perfect for making a Japanese cheesecake. The gods of culinary fate were looking after me after all and I think that the whipped egg whites in a Japanese cheesecake actually meant that this cake would have similar properties to a buttercake (albeit a rather different texture and taste) and it would be able to rise whereas I don't know if it would have worked with a regular cheesecake as it doesn't rise. 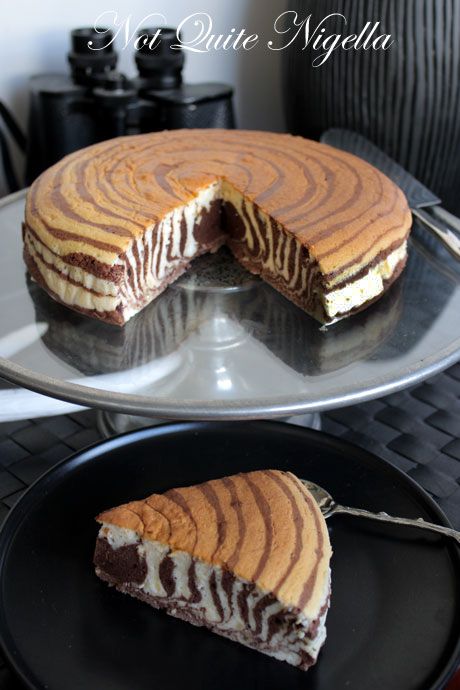 For those of you unfamiliar with Japanese cheesecakes, they're nothing like regular baked or unbaked cheesecakes. They're really more like a light sponge version with a hint of cream cheese but certainly nowhere near as rich as a regular cheese (not that there's anything wrong with that). With my recent Monkey Bread, Panda Bread and my panda and koala cupcakes, I think I almost have enough to throw a themed jungle party (ok so koalas don't really live in the jungle, don't burst my bubble!).

I made the batter according to the instructions and clutched my hands together anxiously in front of the oven. Would it rise? Would I get the desired striped zebra look? Or was the whole morning a waste of time? I peeked in the oven, eager to slice it open. On top it looked ok but what would it look like when I sliced it? Would the love story of the girl and the recipe have a happy ending?

Girl slices cheesecake, breathes a sigh of relief and thanks the gods of culinary fate that she has at last found her true love and that it hasn't let her down. 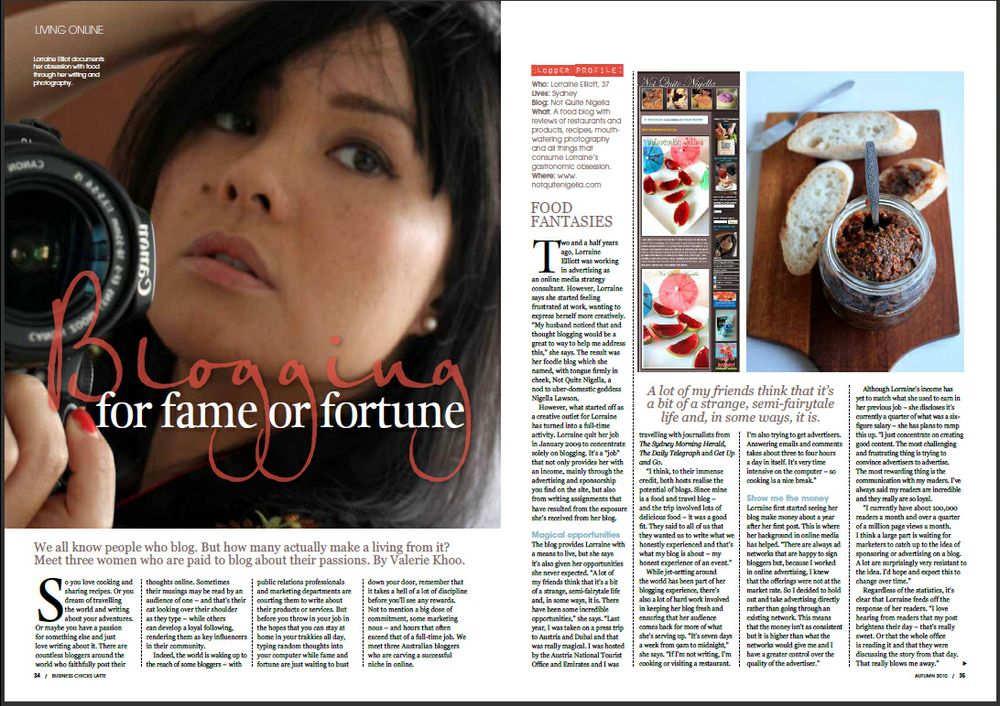 And in some rather fabulous news, I was featured in the new Latte magazine! It's a fantastic article and I was ever so pleased with the way that it came out :)

Step 1 - Prepare cake tin. Lightly grease and line the bottom and sides of a round 12 inch springform tin with greaseproof baking paper or parchment paper). Wrap two layers of foil around the tin to prevent water seeping in. Find a large baking dish that will fit the springform tin. Fill the empty baking dish 1/4 of the way full with water and place the baking dish with water (don't put the lined springform tin in just yet) in the centre rack of an oven and switch it on to 160C/325F.

Step 2 - Melt cream cheese, butter and milk over a double boiler-use whisk to get out any lumps. Cool the mixture over an ice bath. Fold in the flour, the cornflour, salt, 6 egg yolks, lemon juice and mix well. Whisk 6 egg whites with cream of tartar until foamy. Add in the sugar and whisk until soft peaks form and there is no liquid egg white at the bottom.

Step 3 - Add one third of the egg white mixture to the cheese mixture to loosen. Then add the rest in third batches and mix well and ensure that the egg whites are thoroughly combined gently by folding-there should be no streaks at all. Divide the batter evenly in two and in one bowl, sift the cocoa in it and combine well using a folding action.The most important thing is that the two batters must be of the same consistency for this cake to work. 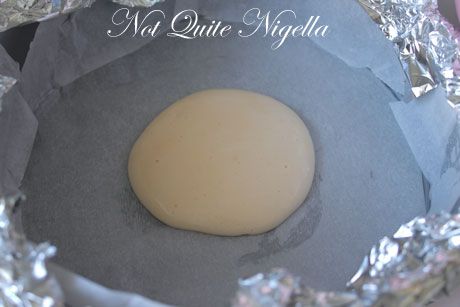 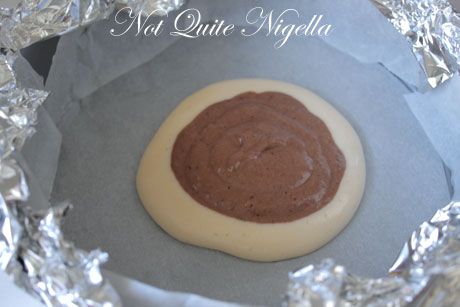 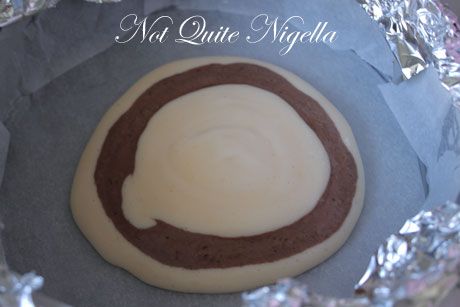 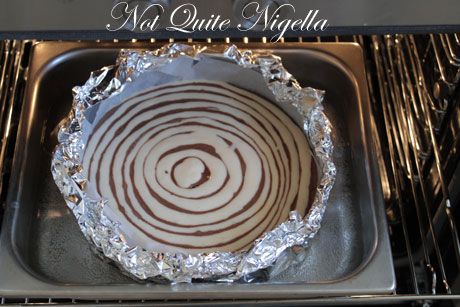 After all of the batter is added. Ready to bake in the oven in a water bath

*It is very important that you don't tilt the tin, the batter will just spread by itself if they're of the same consistency. *Keep adding 3 tablespoon circles of batter until both of the batters are used. If you don't divide them evenly like I did and I had too much cream batter left over, I just stopped adding it and baked the leftover separately as I didn't want to ruin the zebra effect. 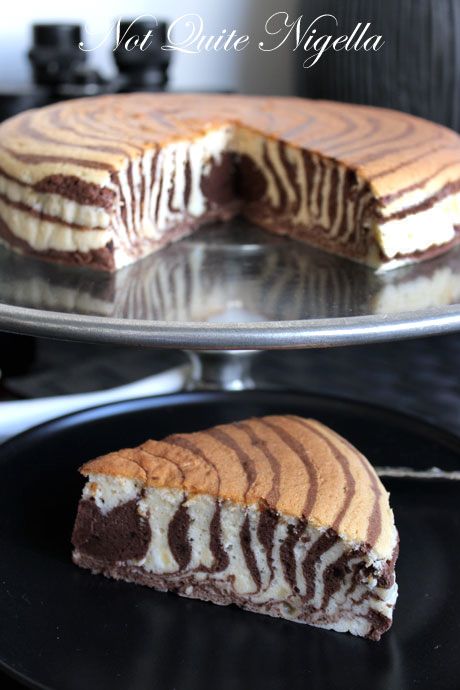