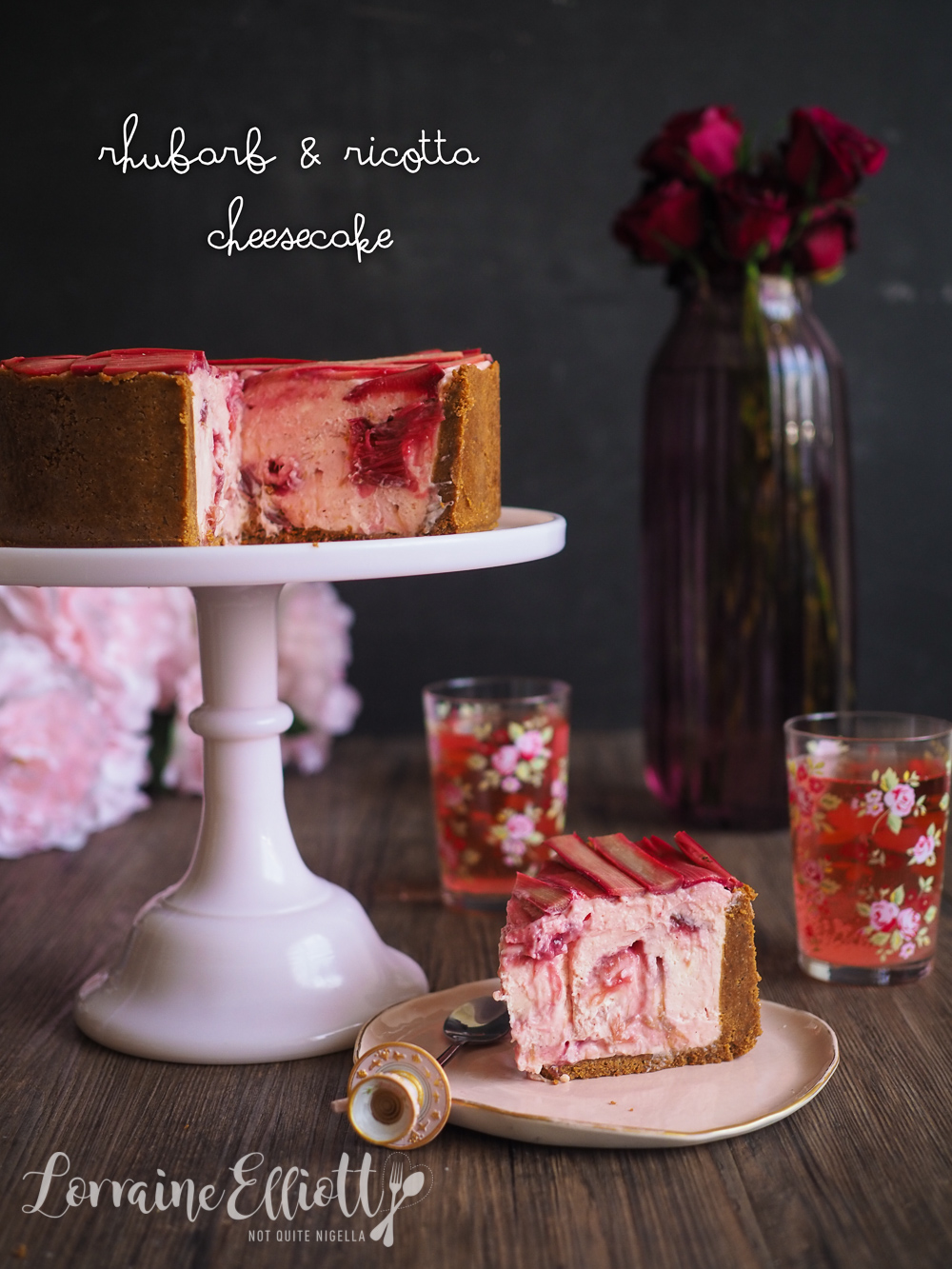 Dear Reader, you simply must make this cheesecake. Rhubarb is a perennial and there's plenty of it right now. This rhubarb unbaked cheesecake is light yet beautifully creamy in texture from cream cheese, ricotta and white chocolate with a full cookie crumb crust and a layer of vanilla poached rhubarb on top. I also share one of my favourite tips for making cheesecake. I called her Millie. This is a pushy recipe Dear Reader!

This is one of my favourite cheesecakes ever my lovelies. It's as much as celebration of the filling as it is the crust. I also love the textures; the cream cheese and ricotta filling is so light and I love the texture of the moreish browned butter cookie crust. This cheesecake is for you fellow cookie crumb lover. 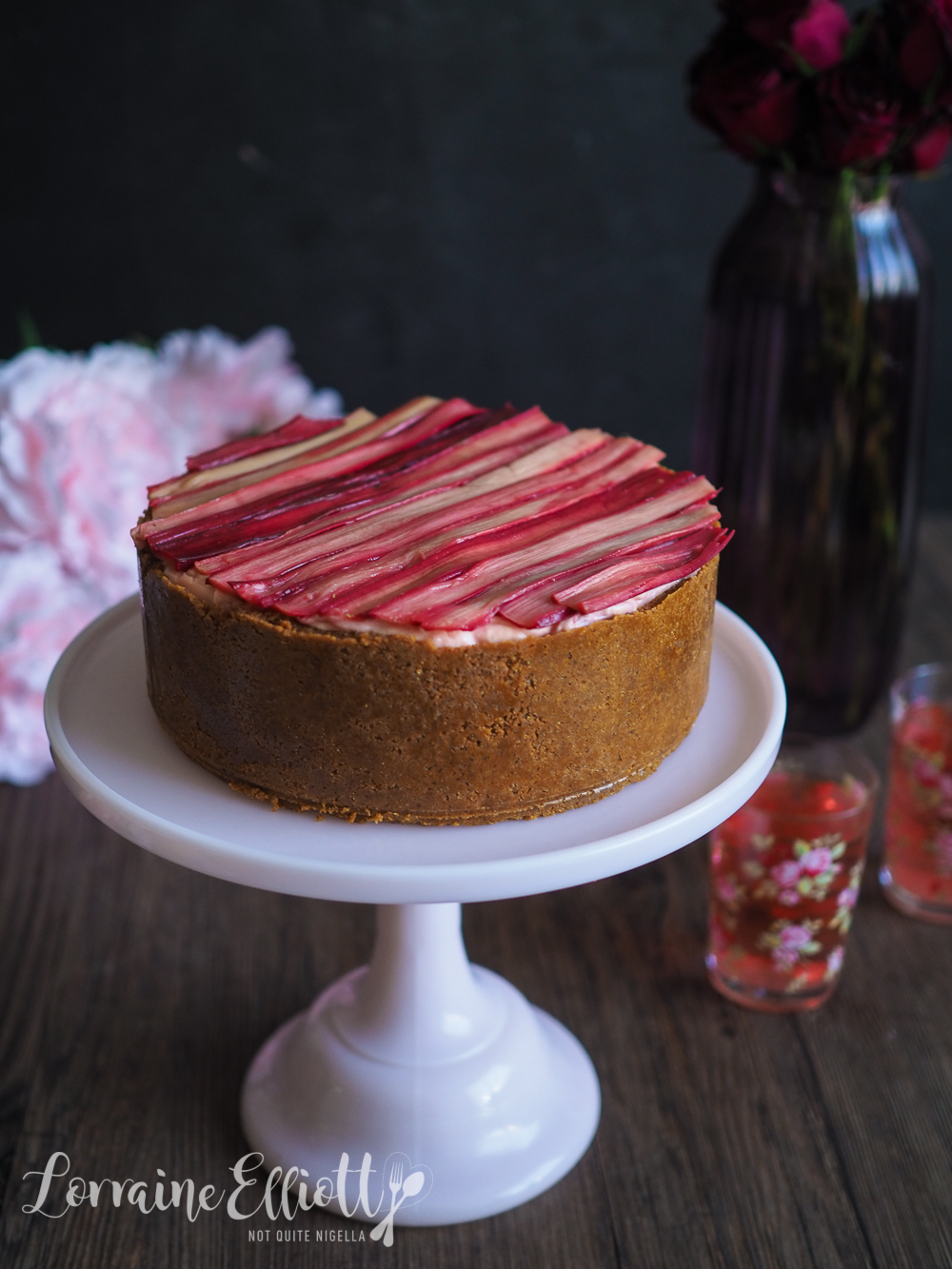 My secrets to making a delicious cheesecake crust:

1 - Add a few tablespoons of raw sugar to the crust to give it a really nice crunch especially when compared to the creamy filling. I am a texture freak so I always appreciate a range of textures.

What are the best cookies for a cheesecake crust?: I know American recipes specify Graham Crackers but these can be hard to find in Australia (try Filipino stores if you really want to use Grahams). I prefer Lotus biscoff cookies because they're so crisp and moreish or Tennis Biscuits (in the South African section of some supermarkets). 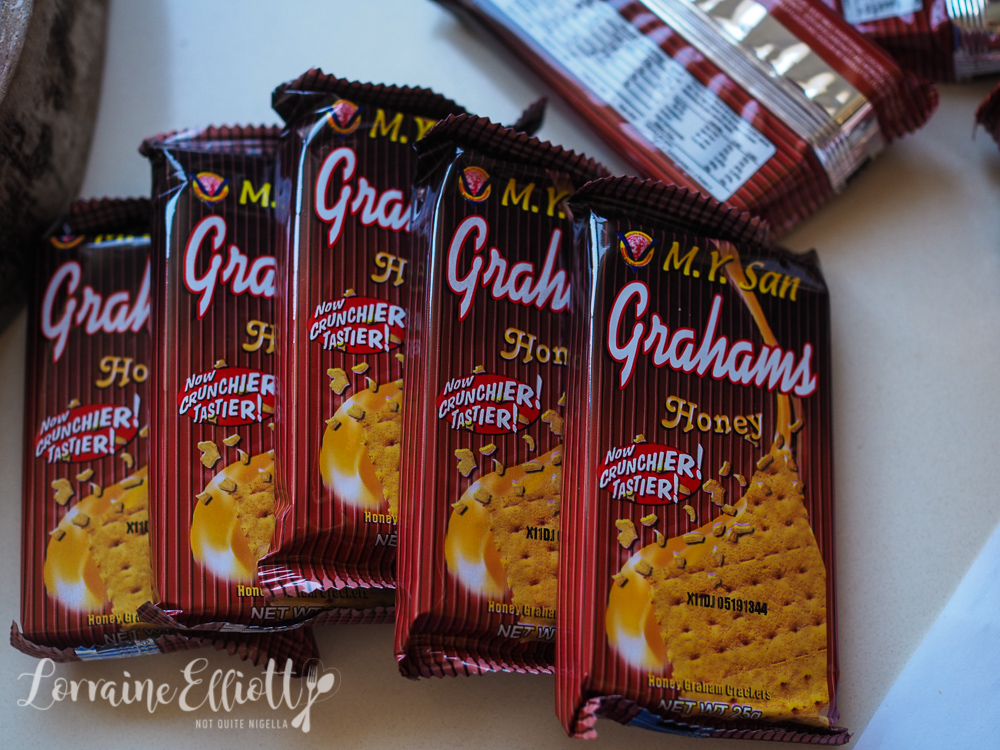 Graham crackers from a Filipino store in Rooty Hill

How to easily make the cheesecake crust: use a flat bottomed glass that doesn't taper up the sides (straight up and down). Use it to press against the base and sides instead of your fingers. 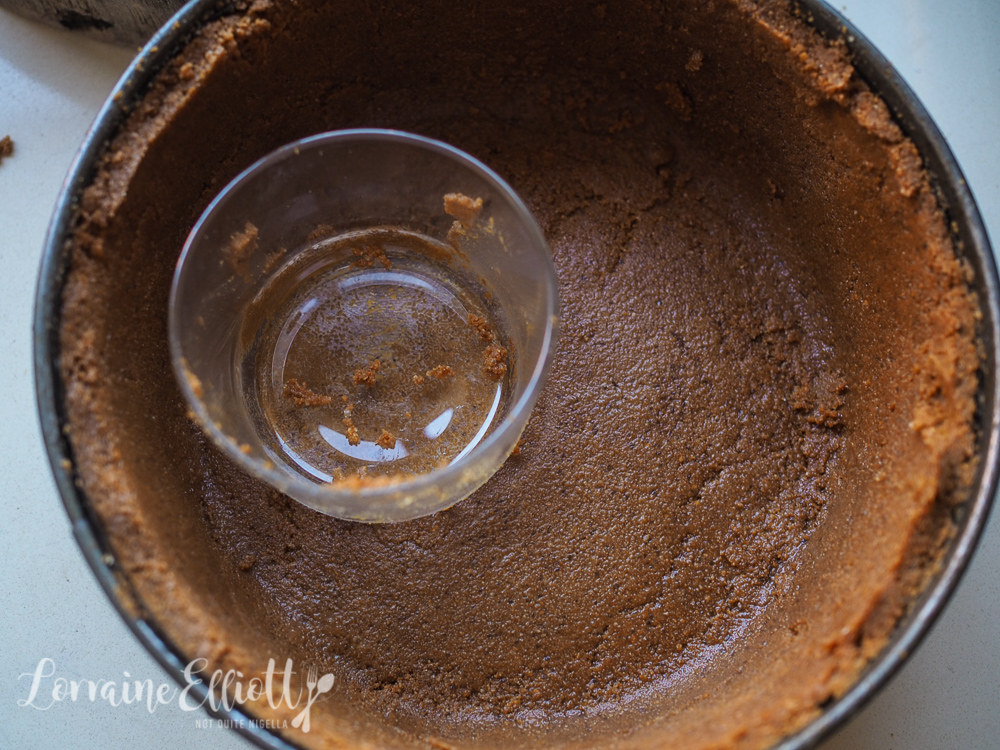 Using a glass to create a smooth base and sides

What can I use instead of rhubarb? Rhubarb not in season? Use raspberries-frozen ones would work well too. 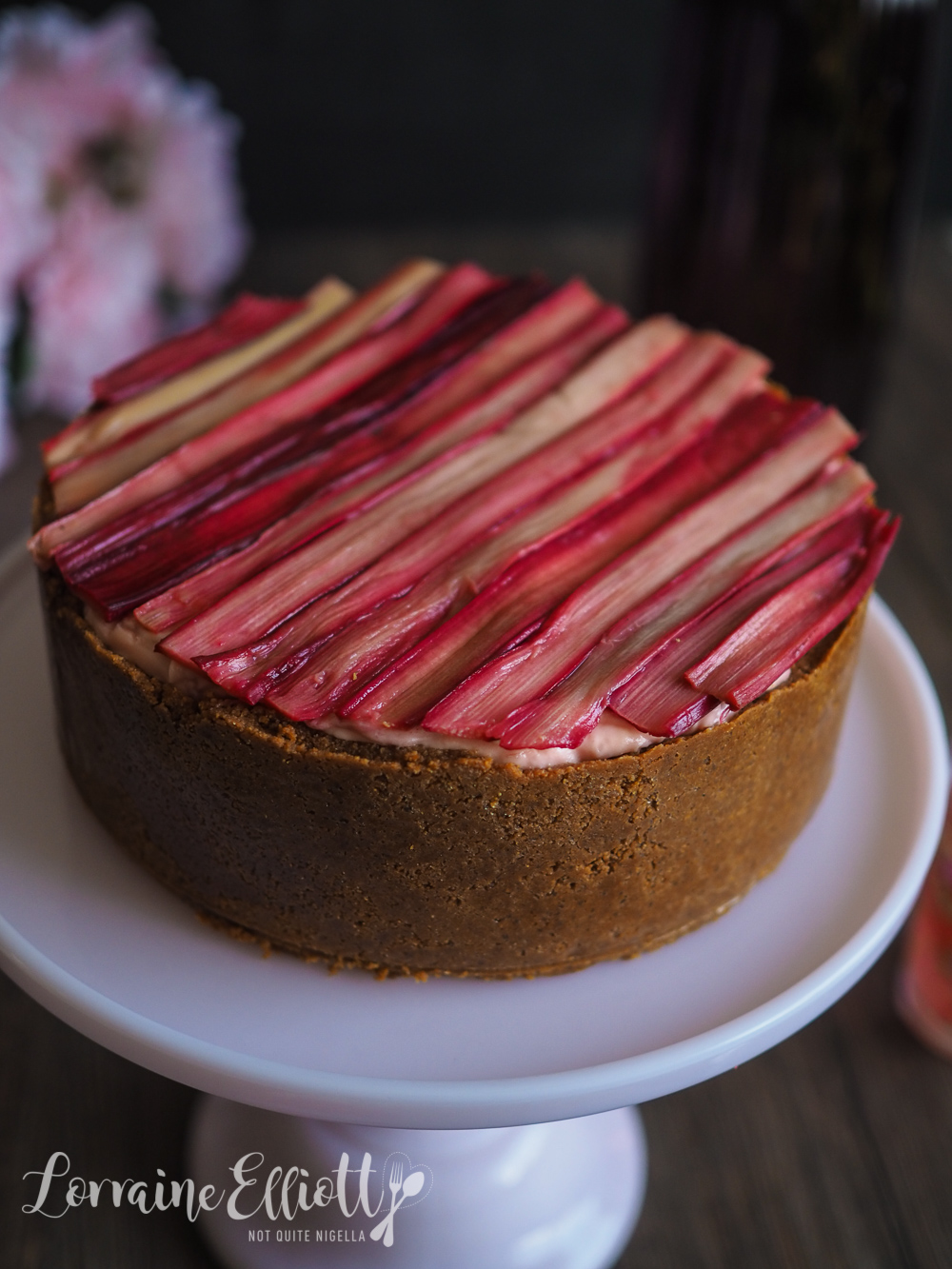 I brought this cheesecake to dinner at a friend's house. He's a chef that cooks AMAZING food and we ate the fluffiest, fattest focaccia, delicious artichoke pizza, burrata salad and the most incredible gnocchi. Dessert was this cheesecake and I know what you're thinking. What kind of sucker for punishment brings a home made cheesecake to a chef's house? Me, but I already had two cakes at home Your Honour. I was very relieved that they liked it. 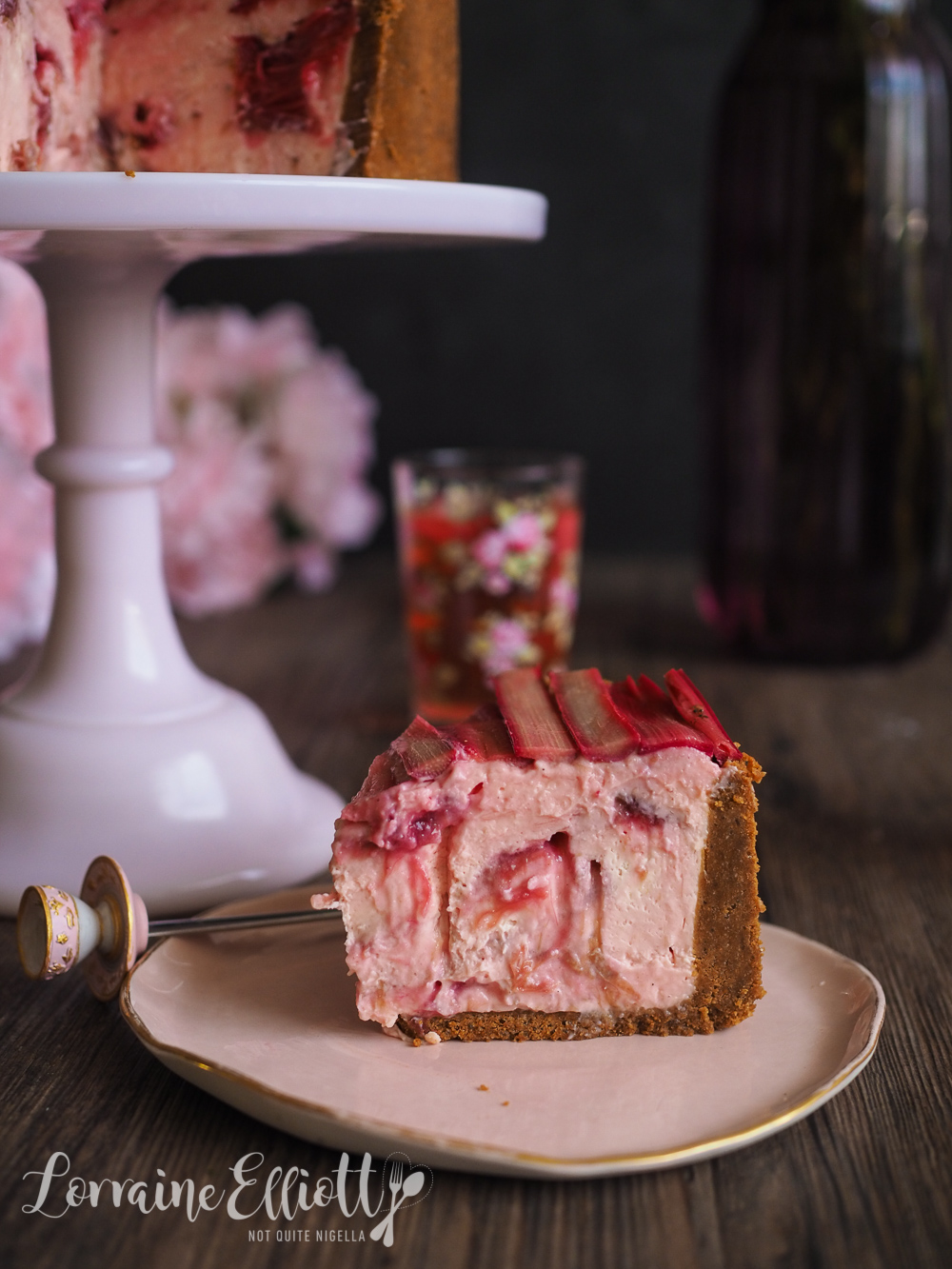 He and his girlfriend have a dog called Lola who is a cross between a German Shepherd and a Golden Retriever but looks like a Black Labrador. She was the sweetest girl and very calm for a 7 month old puppy. I took a liking to her straight away and I think she sensed that I was the cheesecake lady because she gave me kisses and would sit at my feet occasionally licking my leg or toes for much of the time.

During the night I accidentally lightly kicked her when I was repositioning my feet. "Oh I'm so sorry sweet girl!!" I said cooing at Lola at my feet. "Are you ok sweet baby? I didn't see you there," I said bending down to pat her. I reached down and pet her. Instead of feeling warm, soft fur, I felt something else. 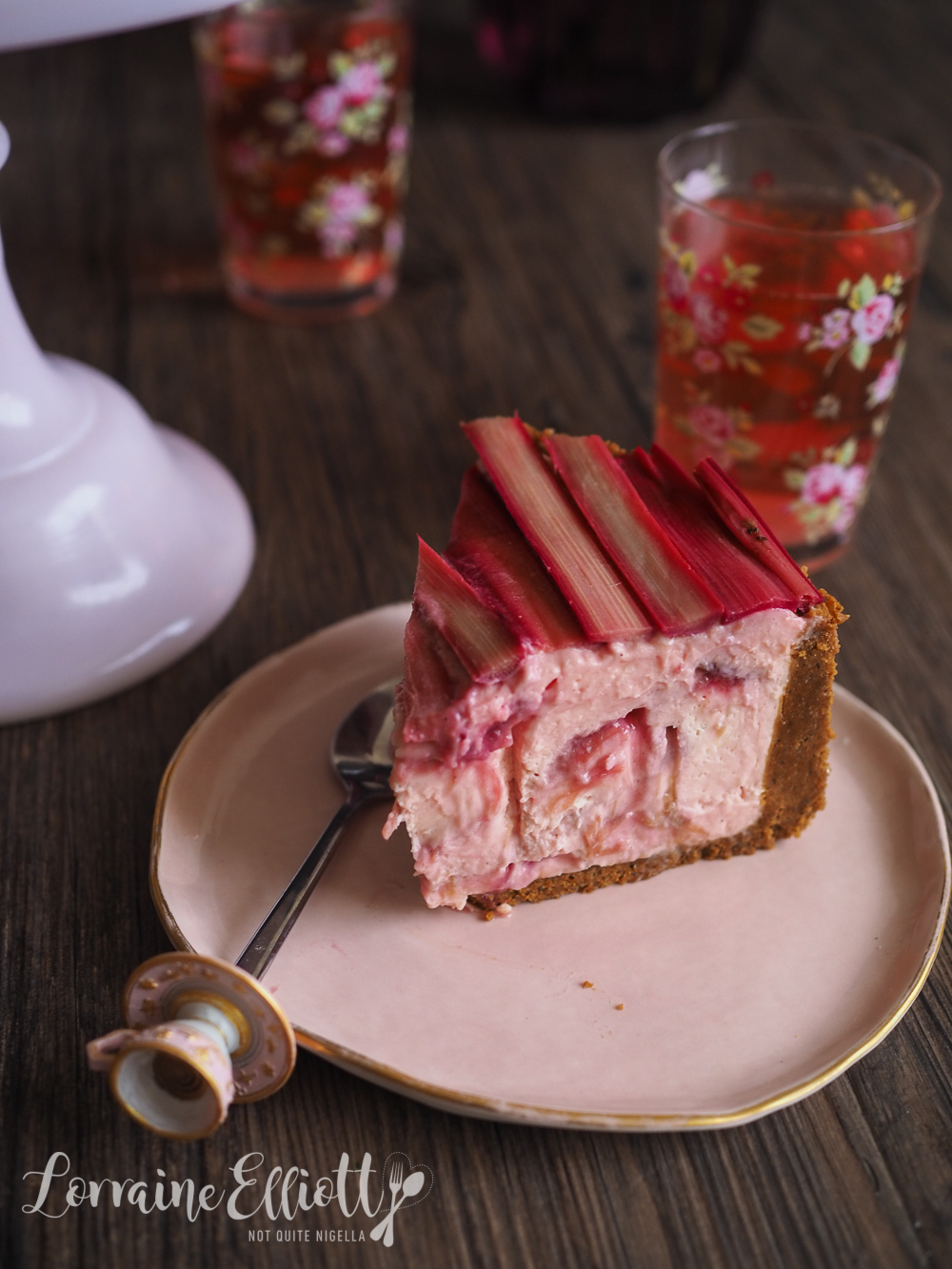 It wasn't Lola at all, I was busy cooing at and petting my black handbag that was sitting on the floor! I got new contact lenses and they aren't quite right for me (clearly right! LOL)! Nobody else noticed as Lola was somewhere else under the table but Mr NQN who was sitting next to me did and he just rolled his eyes and laughed. Yep, classic me!

So tell me Dear Reader, are you a fan of the cheesecake crust or filling more? Are you a textural person? Do you have a favourite texture?

This cake is best started 1 day ahead

Step 1 - First line a 20cm/8inch springform tin on the base and sides. Place the cookies in a food processor or Thermomix (10 seconds, speed 7) until very fine (this is very important) and then mix with the melted butter and sugar until the crumbs start to cling together when pressed together (if not, add more butter). Press some of the crumbs into the base of your prepared tin and then press some into the sides using a straight sided glass to press into the sides. Place in the freezer until needed.

Step 2 - Cook the rhubarb with the sugar and water until very soft (it will take less than 10 minutes). Cool completely.

Step 3 - Heat the 100ml/3.5flozs cream until almost boiling and then pour on top of chocolate and allow to melt and stir to create a ganache. Set aside.

Step 4 - Sprinkle the gelatine over the water in a wide bowl and microwave for 20 seconds until liquid. 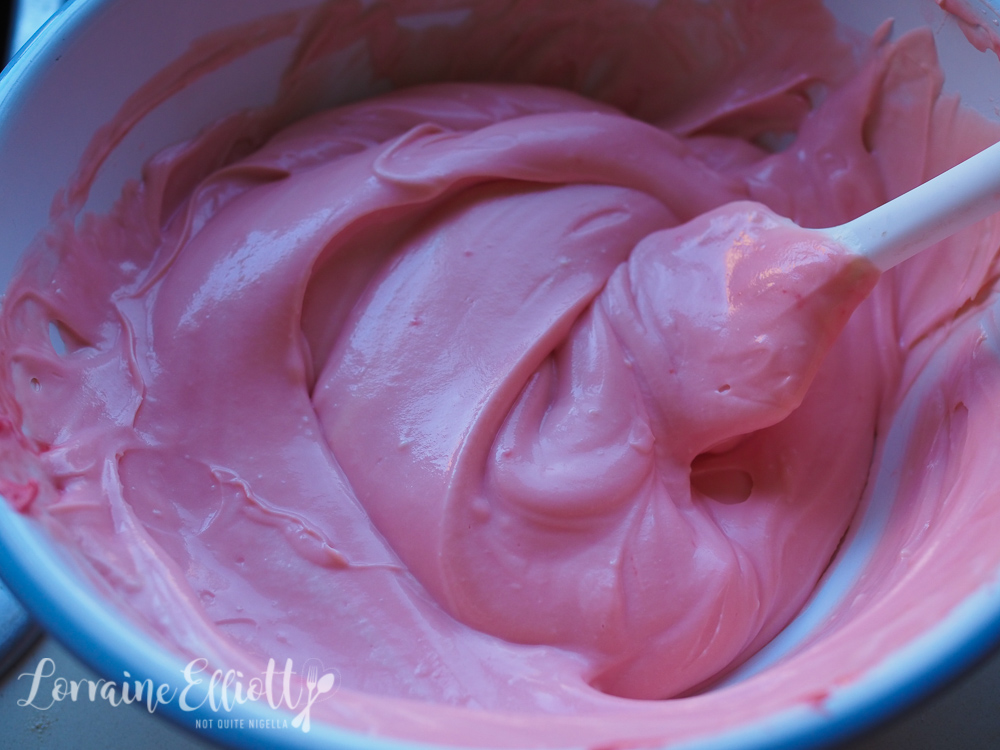 Step 5 - Whip the remaining cream until soft peaks and set aside. Beat the ricotta, cream cheese and vanilla until smooth and then add the ganache and gelatine mixture and beat to incorporate. Fold in the whipped cream. 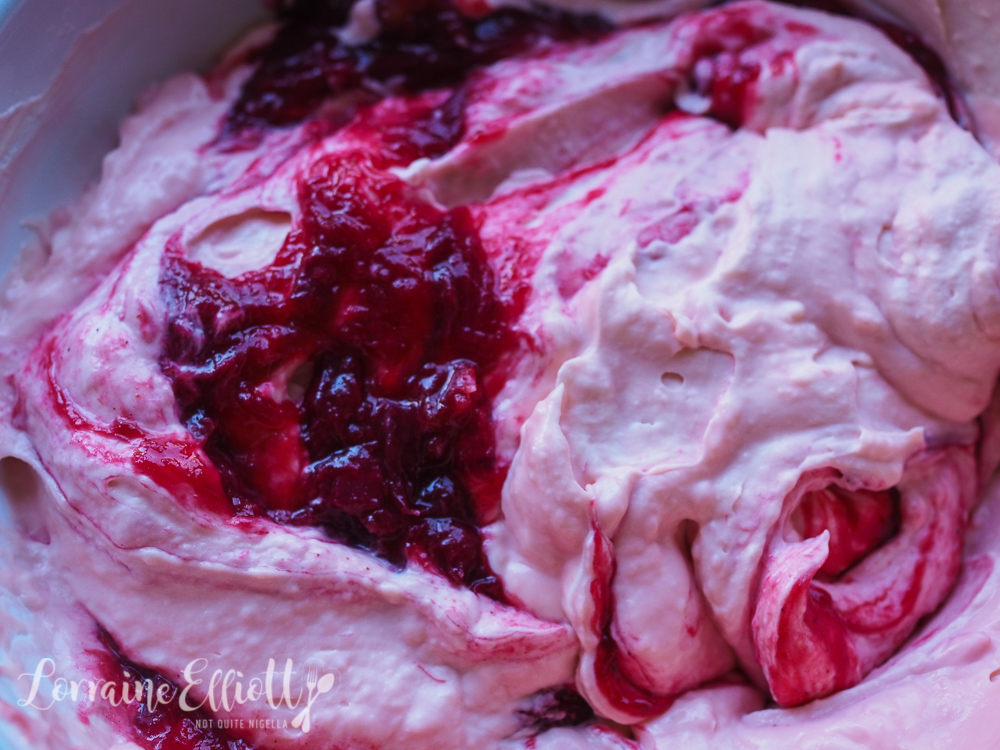 Step 6 - Add the rhubarb and swirl through the mixture (do not over-stir or the rhubarb will disappear into the cream). Scoop into the prepared tin and refrigerate overnight. 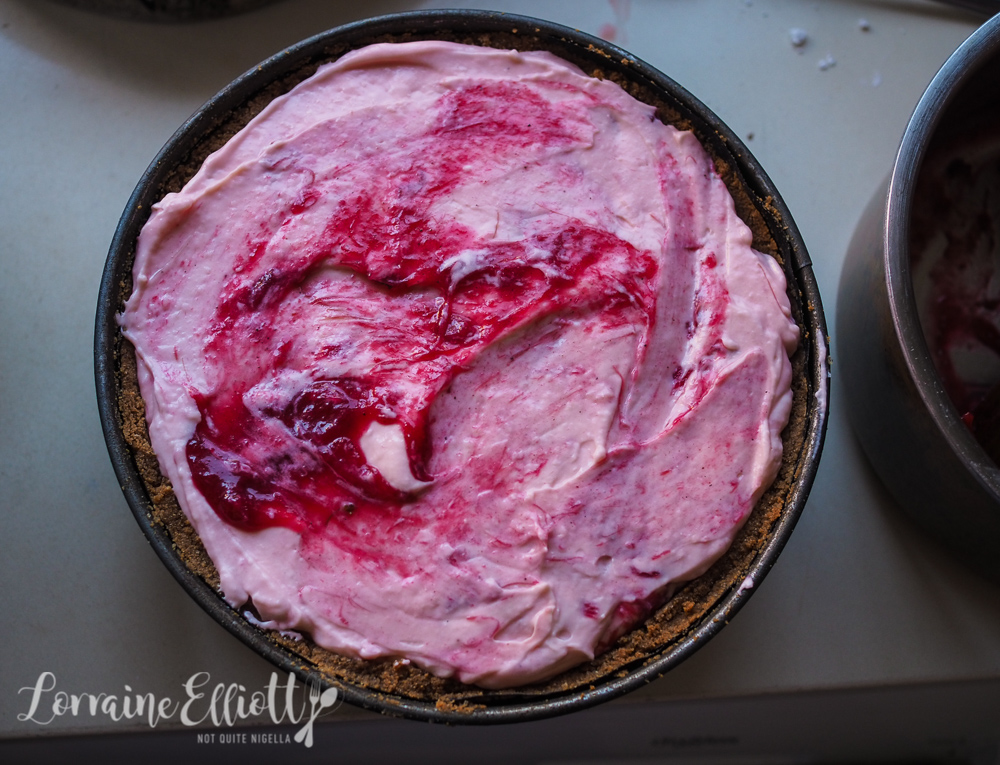 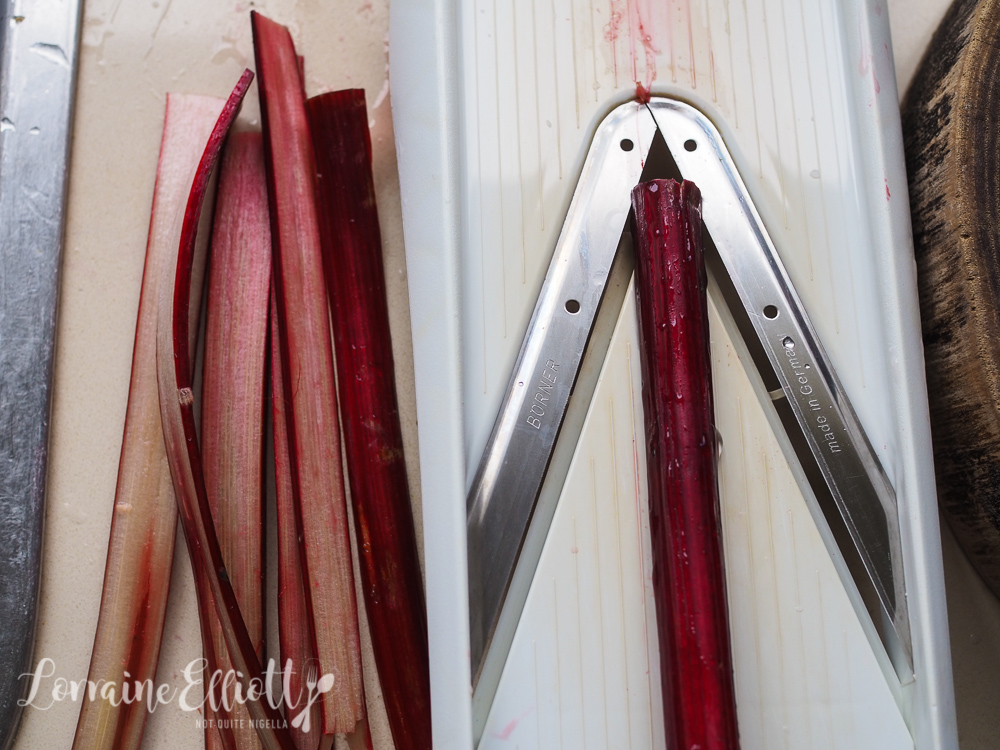 Step 8 - Heat a frying pan on medium heat and add the water and sugar and melt the sugar. Reduce heat to low and gently poach the rhubarb sticks. Watch them carefully as they will turn to mush if they are overcooked and it should only take 1-2 minutes. Lay out on paper towels to cool. Then overlap the rhubarb slices on top of the cake trimming to fit the cake with a pair of scissors. Tip: this is best cut with a very sharp knife. 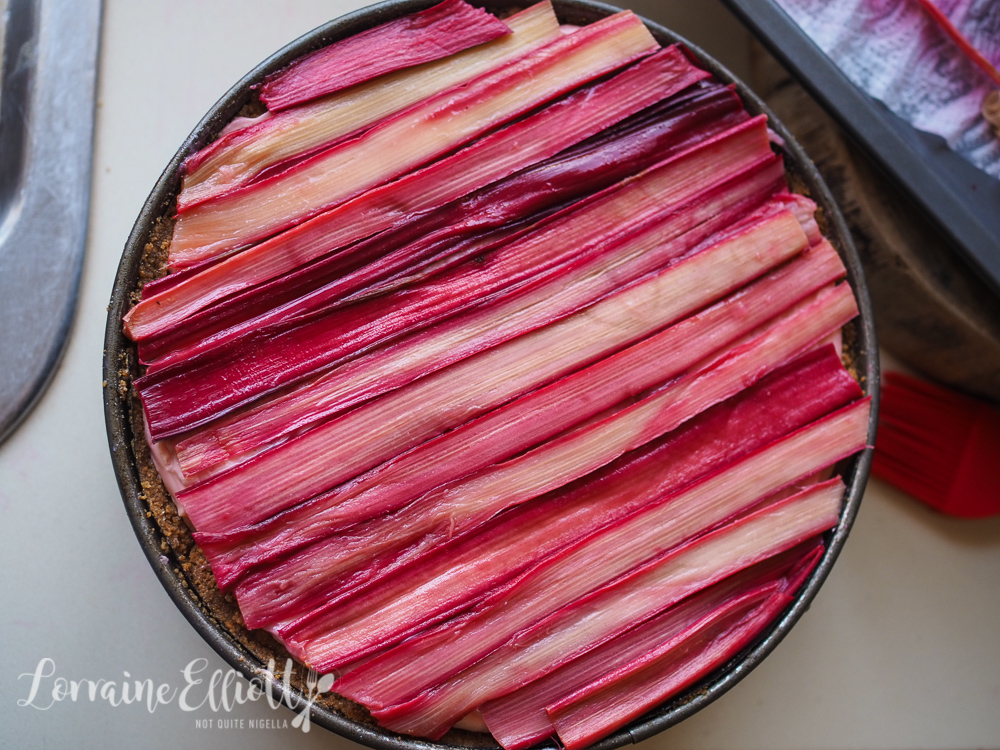