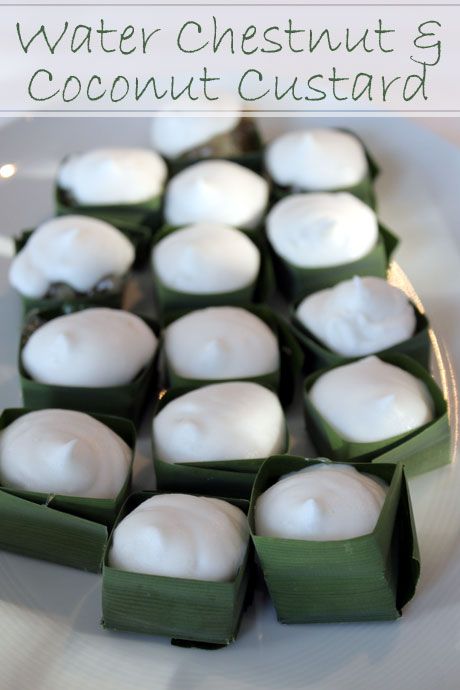 Last week I was lucky enough to attend a media lunch for the Chiva Som Spa Cuisine cookbook. Thai Chef Paisarn in consultation with Serge Dansereau from Bather's Pavilion cooked us a delicious four course lunch. The food was light but also flavoursome and I recall thinking "I could quite happily live on this".  Of course living on this also does entail forking out a considerable sum to stay at Chiva Som-and sadly my gold bar supply has been depleted...ok it never existed but I like pretending that I had one. 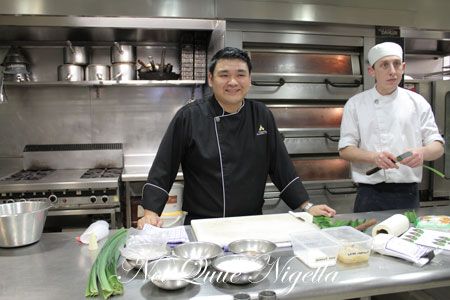 Apart from the tasty savoury morsels we were also served this dessert. I know the idea of using what is traditionally known as a savoury ingredient (water chestnuts) might seem odd for some but this is sweet, light, gluten free, dairy free and only 50 calories a pop. I am willing to try anything so I popped one of these treats into my mouth and was rewarded with a lovely bite sized dessert. On top was a creamy custard and at the bottom was a slightly crunchy and sweet water chestnut layer. 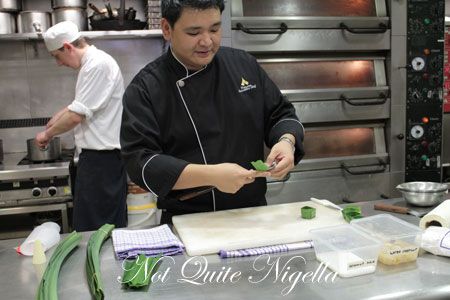 For those of you unfamiliar with traditional Asian desserts, they are quite different from Western style desserts. For starters wheat flour and dairy items are rarely used. You may find yourself eating sweet beans and in this case, sweetened water chestnuts. However despite the lack of cream and cake, these are often very tasty, especially the desserts where coconut is used (sadly which means that the dessert isn't quite as low fat as you'd want). 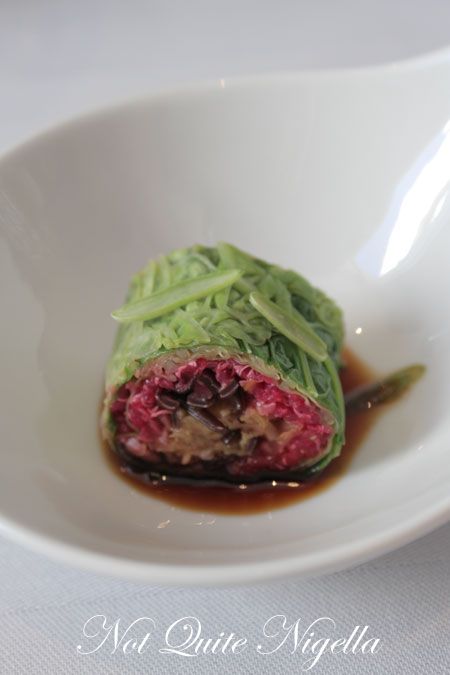 Here are some of the other lovely dishes we had that afternoon but since these were an amalgamation of Serge  and Paisarn, the recipes aren't in the cookbook as they were created just for the event. We started with a crunchy and flavoursome (not to mention pretty) vegetable roll filled with mushrooms and wrapped in cabbage_. 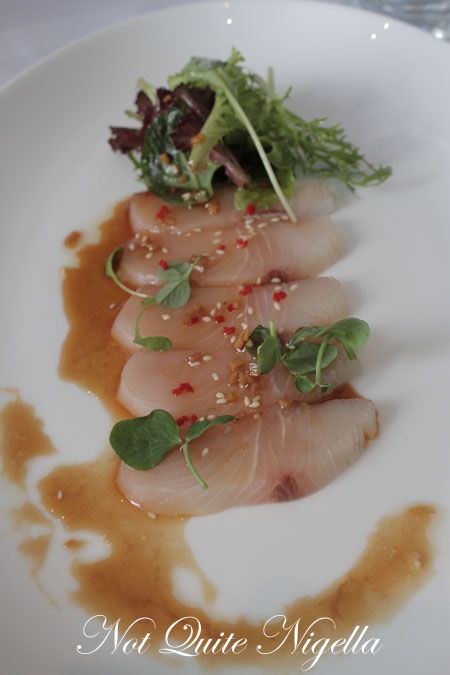 A delicate but sumptuous Kingfish carpaccio with a sesame and soy vinaigrette gives a distinct Asian and Chinese flavour_. 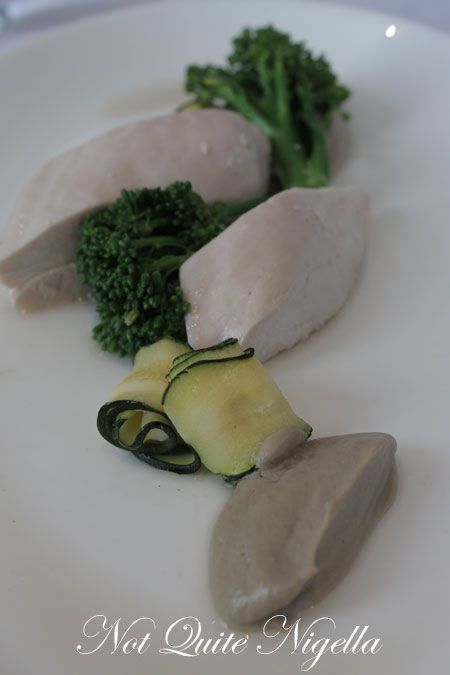 Our main was an unusual five spice poached corn fed chicken, eggplant, goat cheese zucchini. The eggplant quenelles were inspired by baba gannoush (eggplant dip) and had a distinct tahini/sesame flavour. The chicken was tenderly poached and the small parcels of goat's cheese zucchini ribbons were delicious._ 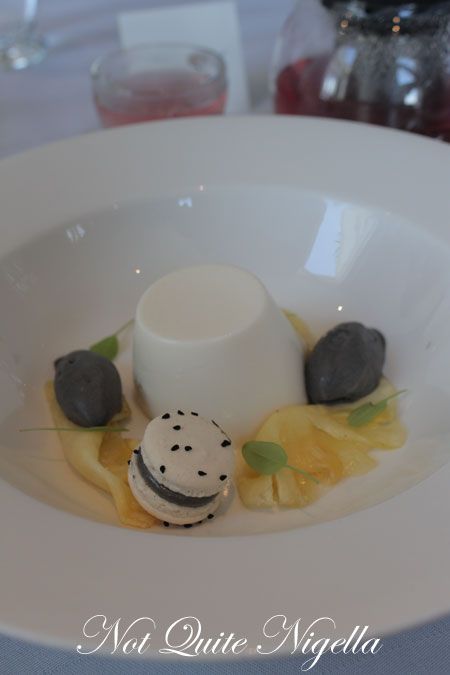 The coconut panna cotta with sesame seed iced macaroon and spiced pineapple is the perfect way to round off the lunch. The macaron is of course Serge's contribution and the sweet, spiced pineapple is divine (I remember sweet Thai pineapples very fondly!). The black sesame cream looks like ice cream but isn't particularly frozen or cold and the soft and wobbly coconut panna cotta is perfectly cast as the star of the dish.

So tell me Dear Reader, what do you think of Asian desserts? Have you tried them?

Buyer's tip: all ingredients can be found at an Asian grocery store 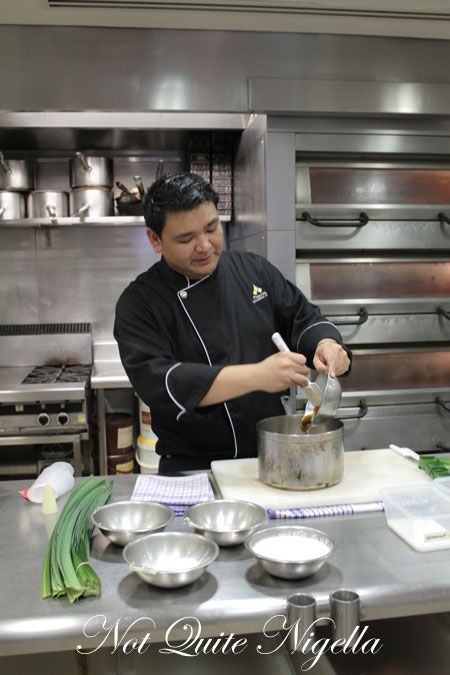 Adding in the honey 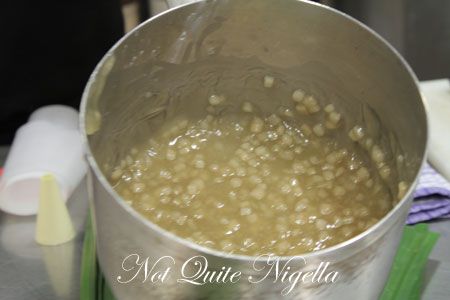 Step 1 - Water Chestnuts: Dissolve honey and mung bean flour in pandan water and add water chesnuts. Transfer to a heavy based wok on a medium low heat and stir constantly (it will become clear). Once thickened, spoon into cups or pandan leaf boxes. 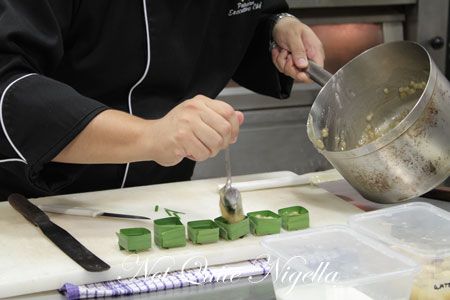 Step 2 - Coconut custard: Mix coconut milk and rice flour together, place in a small pan and bring to a boil. Stir frequently until the mixture thickens. Quickly spoons the mixture on top of the prepared water chestnuts (you can use a piping bag for this). Leave to cool and serve. 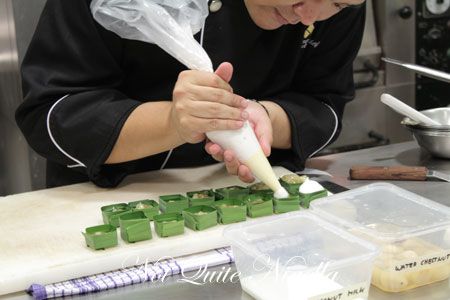 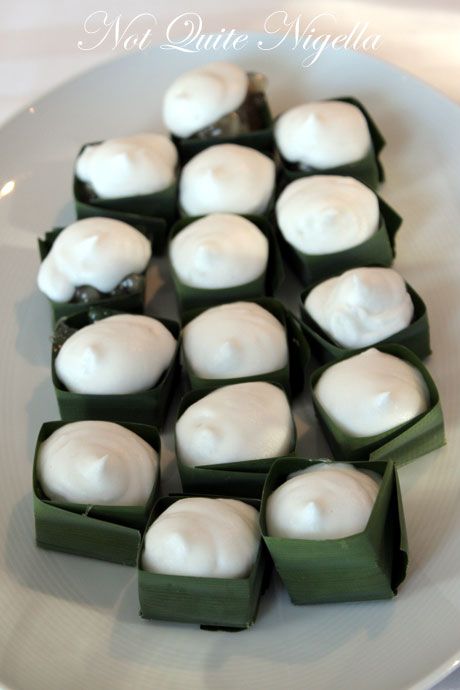