Smokey n' Sweet Bacon Lasagne & The Anatomy of an Obsession 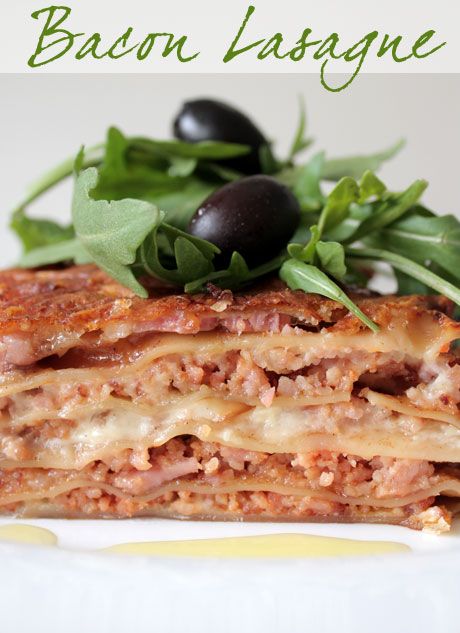 As if my love of bacon wasn't more obvious. If I were a poet like Duckie, I would write an Ode to Bacon. Sadly I am bereft of the ability to rhyme (except in cases where obscene and nonsensical limericks are concerned) so I shall profess my love for this salted, cured meat by tinkering with the pink stuff and finding new ways to stuff it into my waiting, hungry mouth. One item that I thought would be an interesting idea was bacon lasagne. 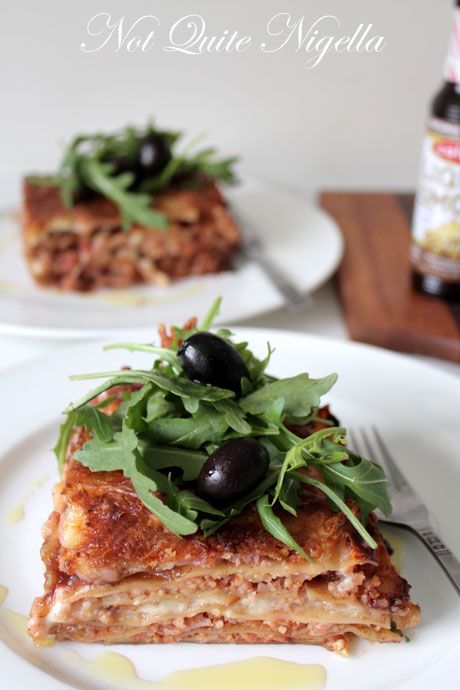 This became an obsession of sorts. I tried this twice before and whilst it was nice, it wasn't extraordinary. I wanted something that was going to knock people's socks off. I wanted dieting friends to ask for seconds. I didn't want non-plussed or faint praise, I wanted a standing ovation. So I mulled on it and considered my options while sitting in a big overstuffed leather chair pressing my fingertips together thoughtfully like a scheming billionaire*. I'd have to come back to the recipe at a later stage. Fast forward a month or two and the fabulous Faith from An Edible Mosaic had sent me my prize for her All Through the Year Cheer Event. She told me that she would be sending me a huge box and asked me if I wanted to try anything else from the United States.

There was one thing that I was dying to try and that was Baconnaise and grits. I know Americans may laugh as they're both easy to find in America, particularly grits and certainly nothing exotic but I hadn't tried either and after reading about both I was curious. After Faith searched for the baconnaise (her shop was out) she sent me the package and as Australian customs likes to do, they confiscated my baconnaise and replaced it with one of their pamphlets-humph! It wasn't quite a fair deal. It seemed baconnaise would remain something that I would get to try if I visited the US. 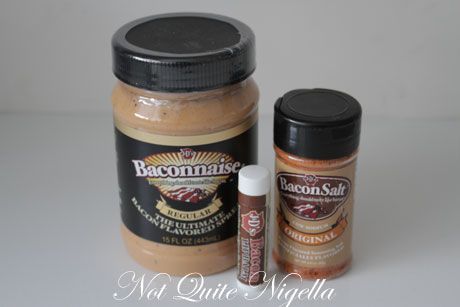 Then a lovely reader of both of our blogs Jonathan contacted Faith. He was in Australia and he was in possession of baconnaise! Not only baconnaise but bacon salt and bacon lip balm! He asked me if I would like him to send me some but I didn't want to deplete his supply. He wouldn't hear of it and said rather sweetly "No problem, a small way to thank you for the joy your posts have given me." I have mentioned that I do have the most darling readers ever haven't I?  Soon after I received a package of goodies: baconnaise, bacon lip balm and bacon salt. Thankyou SO much Jonathan and Faith! 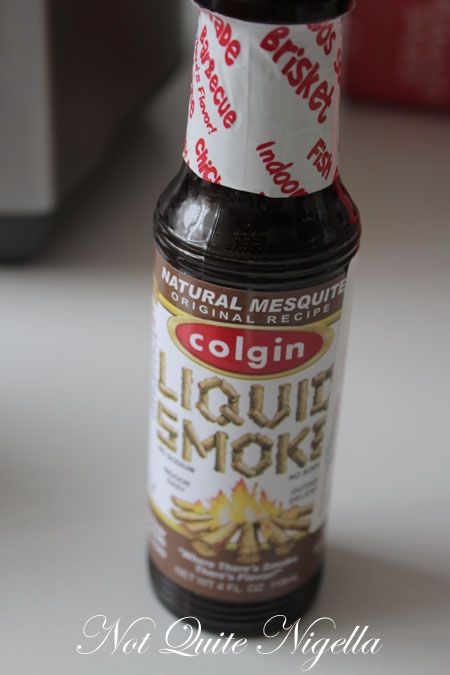 I tried the baconnaise and as Jonathan said, it was nothing like bacon as we know it. It was smokey, most certainly but it didn't hold that umami flavour that bacon has and it wasn't really moreish like bacon is. It was ... well peculiar. I looked at the ingredients and saw that there was no bacon in it at all but what I did see was garlic, onion and smoke. Liquid smoke! By George I think we have the secret to bacon lasagne! So a short while later I replenished my supply of liquid smoke (used up in my Bacon Jam) and set to work, joy renewed and a spring in my step.

I wanted to make a bacon lasagne that was smokey and a little bit sweet. Not overpoweringly sweet and there's no real sugar to speak of in the recipe apart from a teaspoon with the caramelised onions but it had to have that balance of deep smokiness and sweetness as the bacon would already take care of the saltiness. I also used a variety of cured pork from bacon, speck and prosciutto. I realise that prosciutto is expensive so you can forego this and use more bacon if you would like or leave it out, it's really there as a flourish at the end. And sitting in my fridge from an earlier food venture I had a knob of smoked mozzarella which would be the icing on the cake. 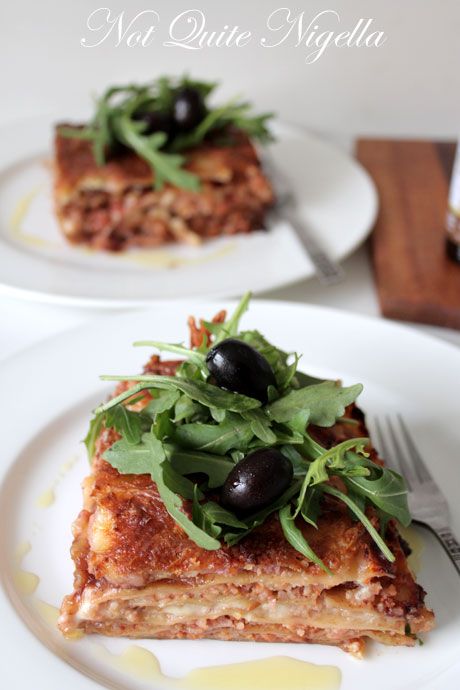 And how was this bacon lasagne? It was smokey, it was baconey and it was pretty damn good if I do say so myself. Don't be too tempted to add too much BBQ sauce as BBQ sauce itself can be very sweet depending on the one that you use. But do enjoy it with as much or as little liquid smoke as you can handle. If you were a fan of my Bacon Jam, you may very well love this lasagne. So I give it with a warning, it's for bacon lovers most certainly. Love it and love it well.

So tell me Dear Reader, what is the strangest food that you have tasted lately?

*may or may not be true

An Original recipe by Not Quite Nigella

I made this in a square 24x24cms springform tin, just so that I could lift it out without any trouble although a regular lasagne pan will work. 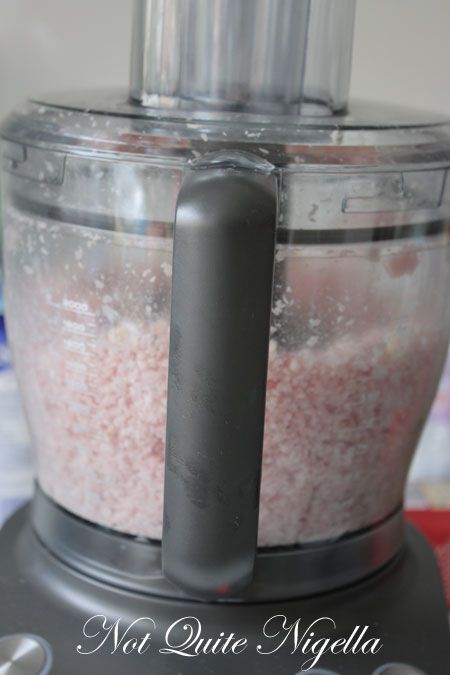 Step 1 - In a food processor, mince the bacon and pancetta. Heat 1 tablespoon of oil in a large saucepan on medium-high heat and fry the bacon and pancetta mince until the bacon is cooked through and lightly browned. I did this in two lots and it took about 5 minutes to cook each lot. Place in a bowl and add some liquid smoke to the bacon (to taste preference) and set aside. Then using the same pan heat up the 2 teaspoons of oil and cook the onion and garlic on a low heat until the onion has caramelised which will take about 15 minutes-but it's all about being sweet and smokey here you understand ;) Add in the teaspoon of sugar and cook for another 5 minutes. 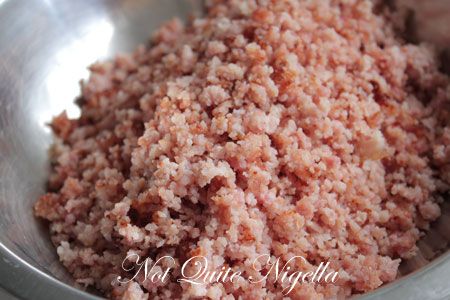 Step 2 - In another medium sized saucepan pan make the bechamel sauce by melting the butter on medium heat. Add the flour and with a flat bottomed wooden spoon stir constantly and cook the flour for 1-2 minutes. Switch to a whisk and then add the milk, a little at a time, whisking constantly to get rid of any lumps. Keep whisking until all of the milk is added and the sauce is thickened and smooth and cook on low. Stir in 100g/3.5 ozs of grated smoked mozzarella into the bechamel sauce. 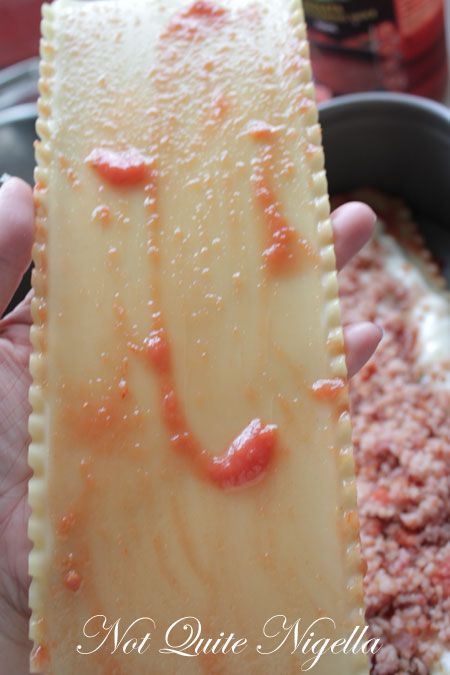 This isn't quite enough passata brushed on one side... 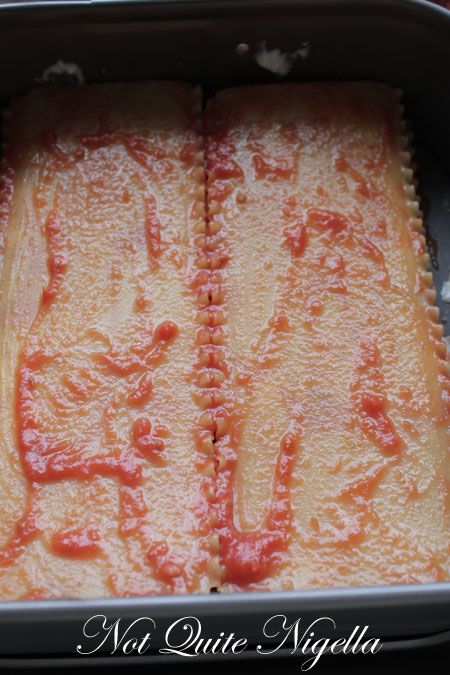 OK this is better 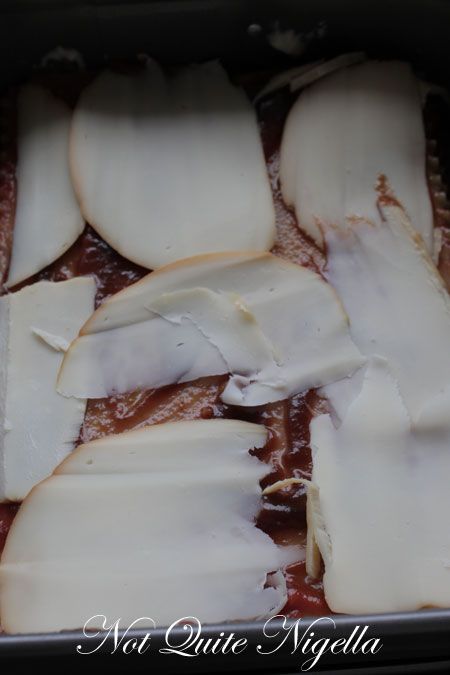 OK I added a random layer of smoked mozzarella 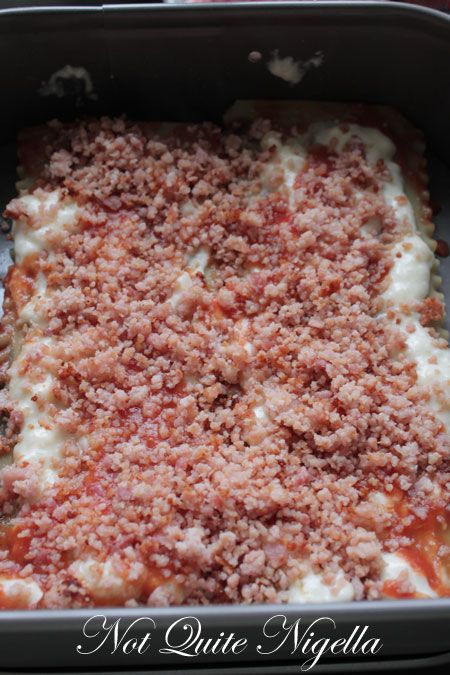 Step 4 - Line the bottom with one layer of lasagne sheets, not overlapping. Then place some of the bechamel sauce, a layer of bacon, a little of the caramelised onion then a layer of the lasagne sheets. Repeat until the top of the lasagne pan is reached - I get a bit Swedish chef when it comes to lasagnes and just put some cheese on a layer if I feel that it needs it or I forget something in another layer. It usually ends up being quite fine.

Step 5 - Add a final layer or prosciutto on top and then some bechamel sauce and then sprinkle the smoked mozzarella cheese over the top and bake for 30 minutes. Allow to cool for 15 minutes before unmolding. 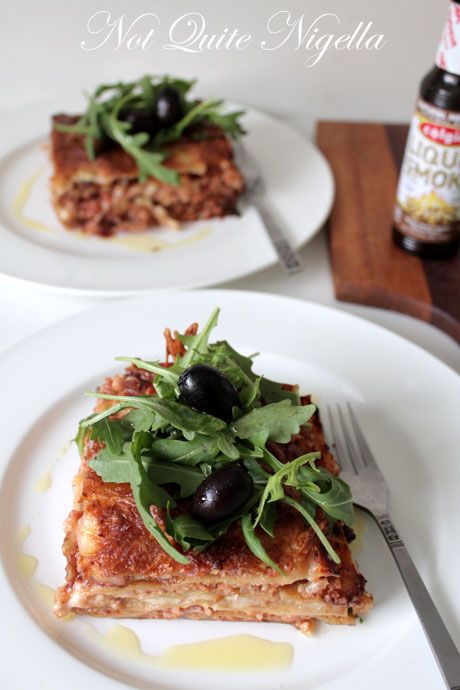