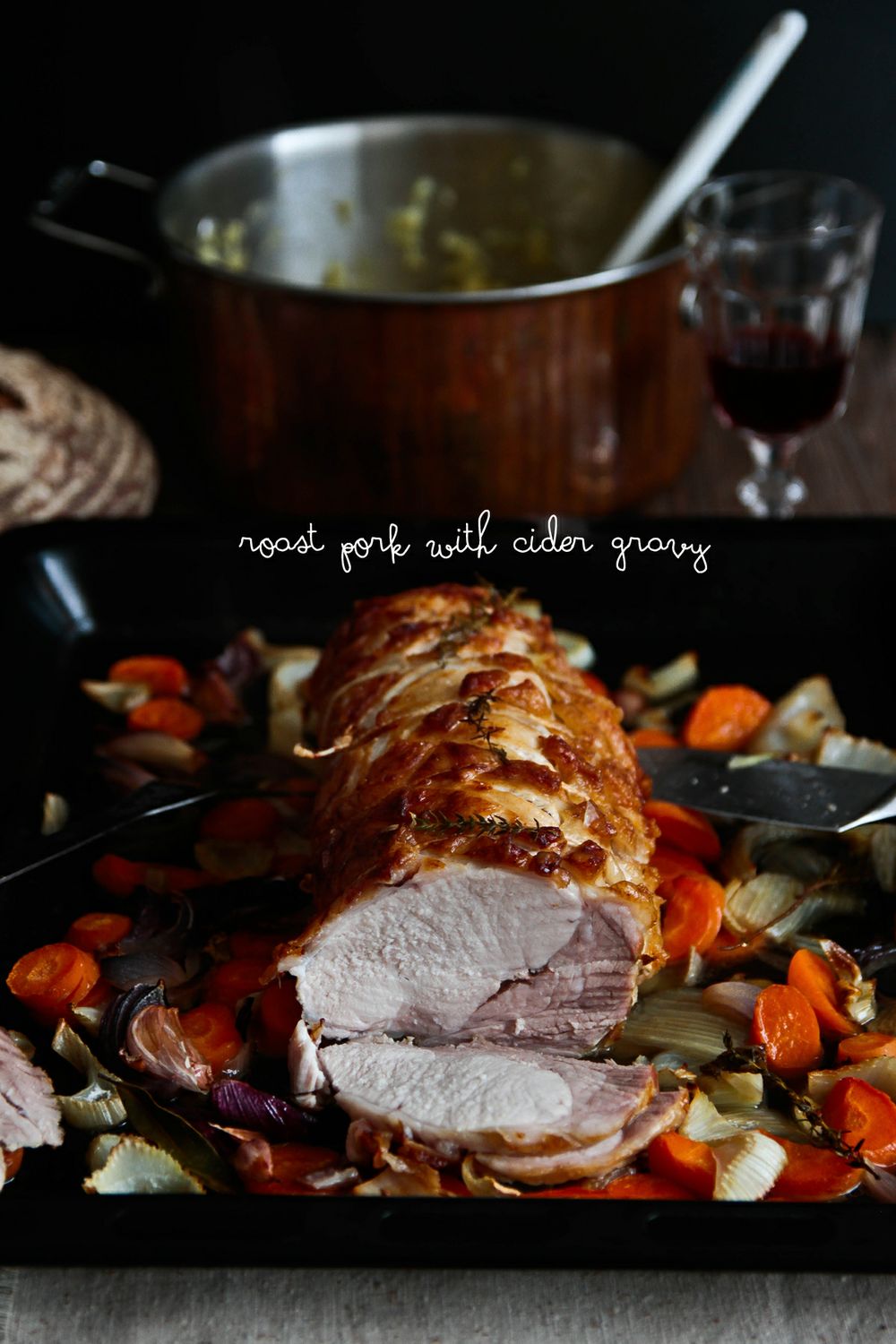 Every Friday night at the end of the working week, Mr NQN has an after work routine. He goes out for drinks with his colleagues and I guess they debrief and unwind after a hard week of work. They usually go to a pub near his work and after a few drinks he comes home, usually smelling of cider or beer. However one night he came home rather keyed up. "You wouldn't believe what happened!" he said to me excitedly.

It turned out that one of Mr NQN's colleagues is in the habit of talking rather loudly and that evening, he divulged the upcoming season's spoilers of Game of Thrones that have played in the U.S. but not in Australia. These crucial plot spoilers was overheard by another pub dweller who was vastly unhappy at having his plot spoiled, came over and threw a glass of cider over the talkative colleague!

I can think of better things to do with a glass of cider and this loin of pork is one of them. Cider is the drink that everyone seems to be enjoying nowadays and I decided to make the most of the chilly early Winter days and put the oven on for a bit of a blast with a rolled pork loin. The cider helps keep the pork moist and the vegetables get some flavour from the cider. The rind is removed first and that is cooked afterwards in as hot an oven as you can get so that it blisters up. Afterwards, you drain off the cider and make a gravy out of it. Oh and I almost forget the mash! It's a fabulous mix of potato, fennel and apple with a sweet, slightly tart richness to it that accompanies the pork perfectly. 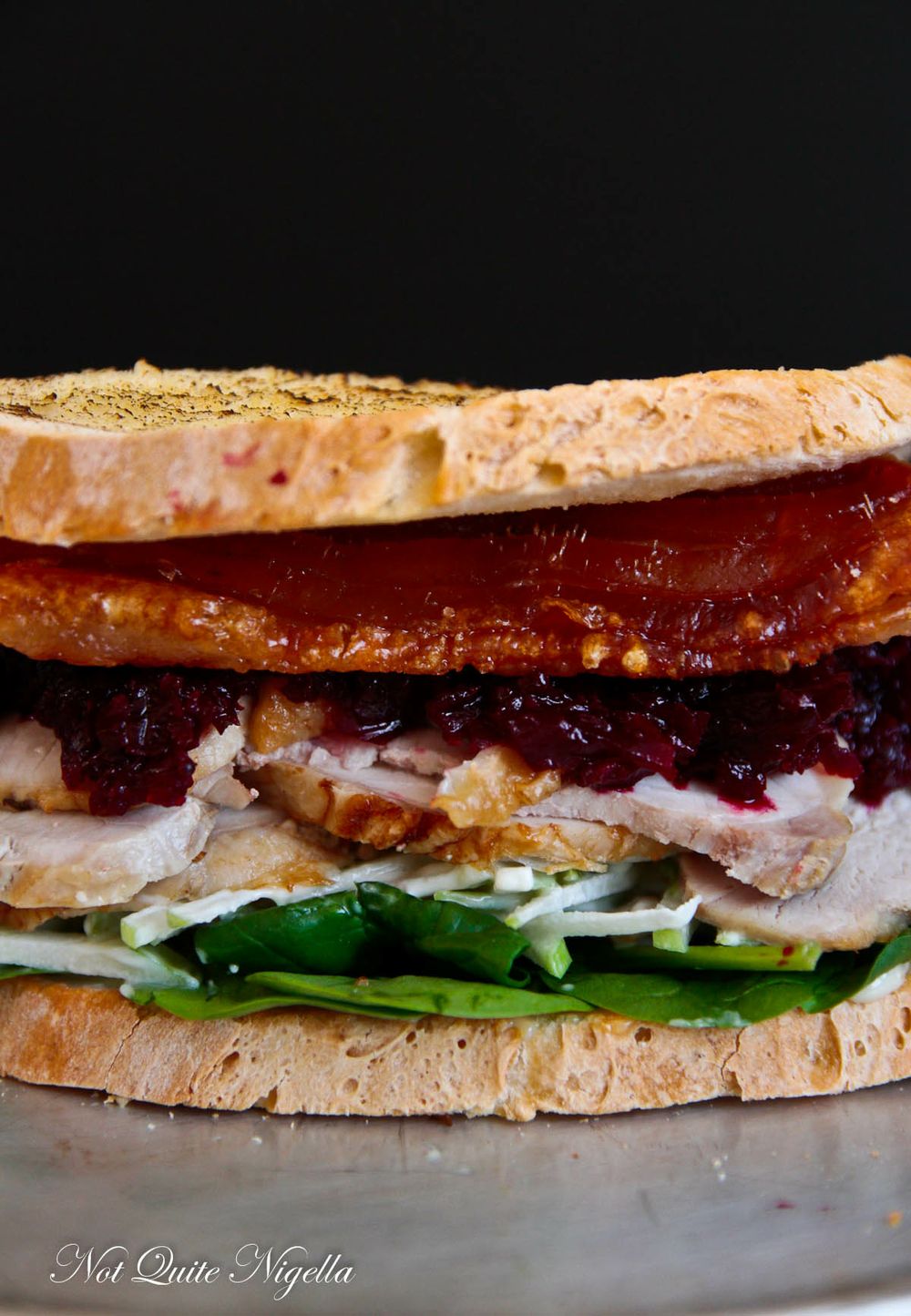 I know a two kilo loin of pork is a lot and it's really more suited to dinner parties or large families. My solution was to have the leftovers in sandwiches with a thick layer of crackling a Waldorf salad with matchstick Granny Smith apples, walnuts and good mayonnaise, spiced beetroot relish and baby spinach. I think that anyone could forgive plot spoiling if they had one of them...

So tell me Dear Reader, do you get annoyed or upset when someone spoils the plot for you? And what televisions shows are you watching now? And are you as excited as I am about Breaking Bad coming back? 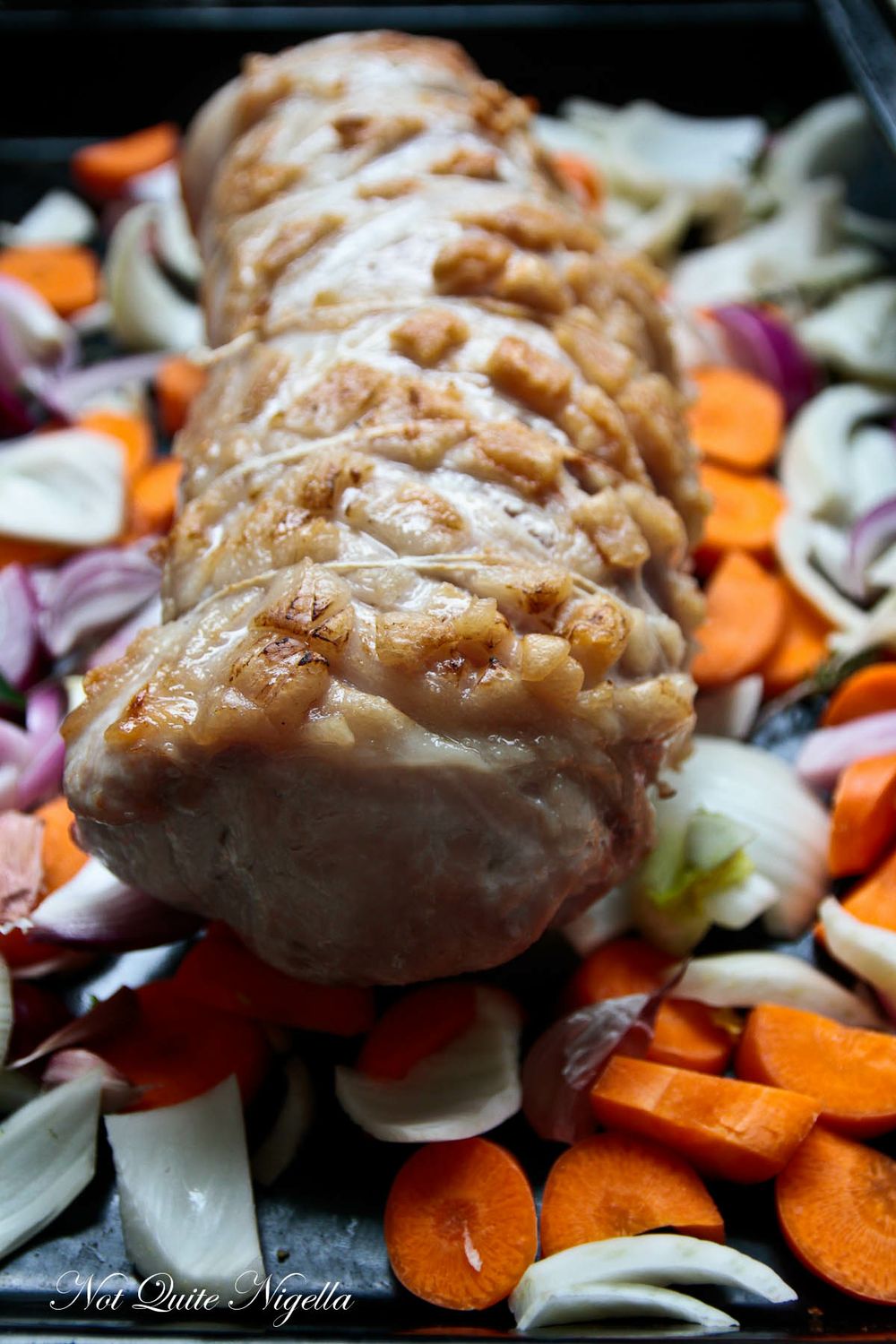 Potato, fennel and apple mash (I made half of this quantity but if you're serving this to 4-6 people use the quantity below)

Step 1 - If you can, the night before cooking this, take the pork out of the wrapping and leave the skin part uncovered in the fridge (but cover the bottom half without skin). This is to dry out the skin to make better crackling. 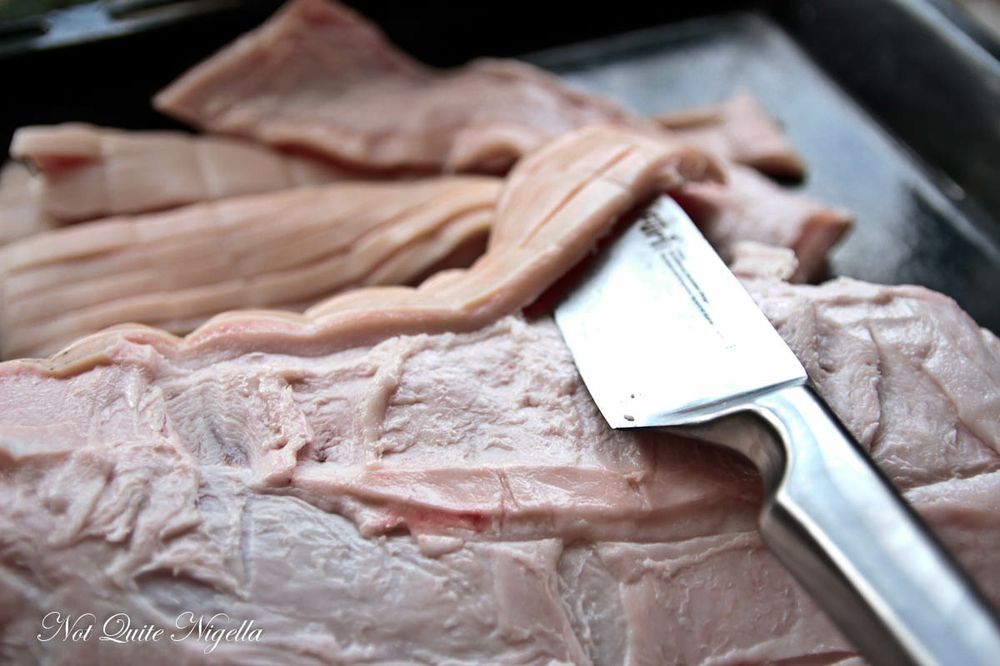 Step 2 - The next day, preheat oven to 230C/446F. With a very sharp knife, carefully remove the rind from the pork loin  leaving as much of the soft white fat as possible. Make cuts in the pork rind as shown. Then with the rindless loin of pork, make criss cross markings with the knife. Place the pork and the rind on a baking tray and cover liberally with oil and salt-unroll the loin and salt the pork inside too and then roll back up and secure with string and bake for 45 minutes. 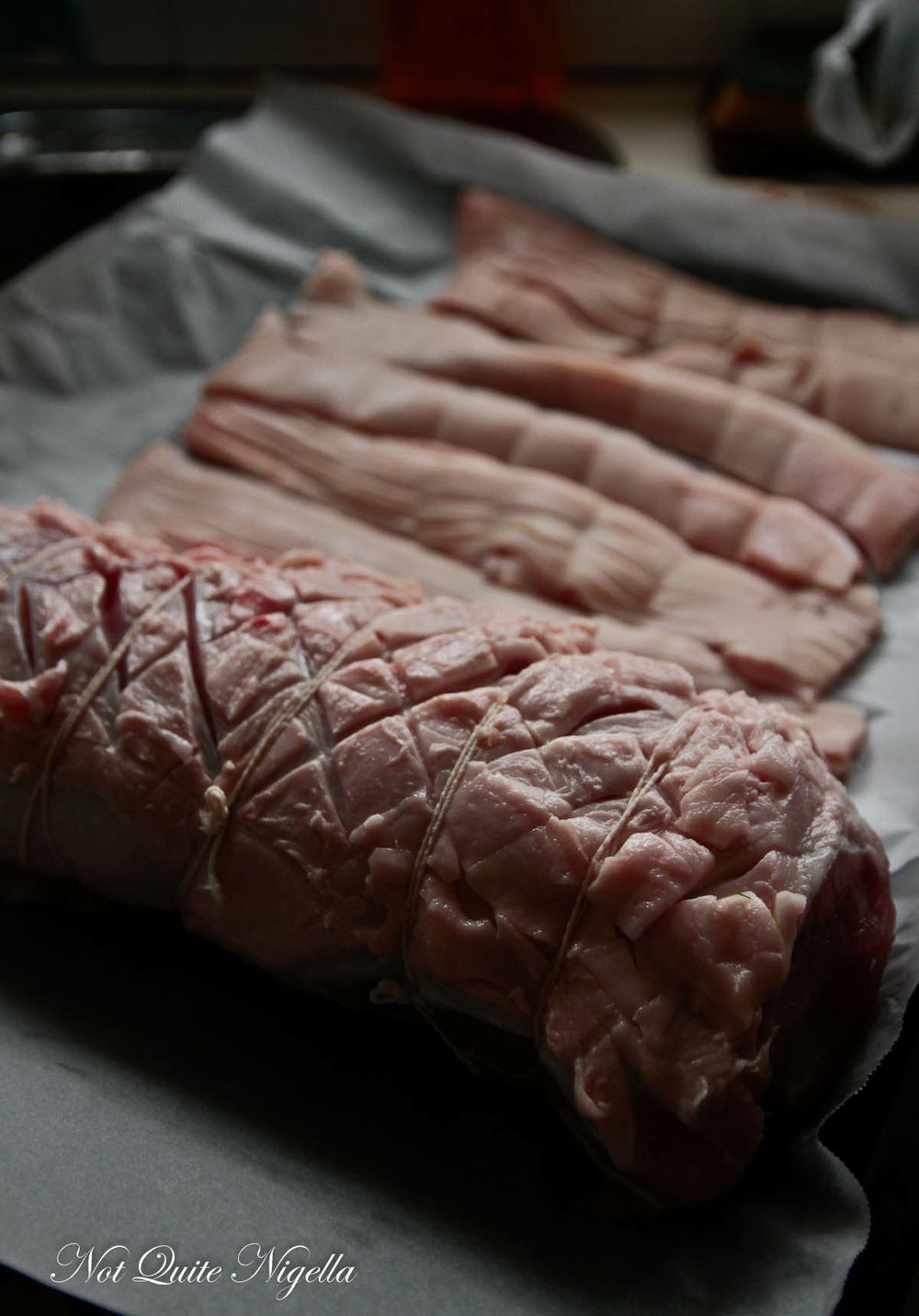 Step 3 - Meanwhile, peel and slice the onions and chop the carrots and fennel into bite sized pieces and spread out onto a large baking dish with a drizzle of olive oil. 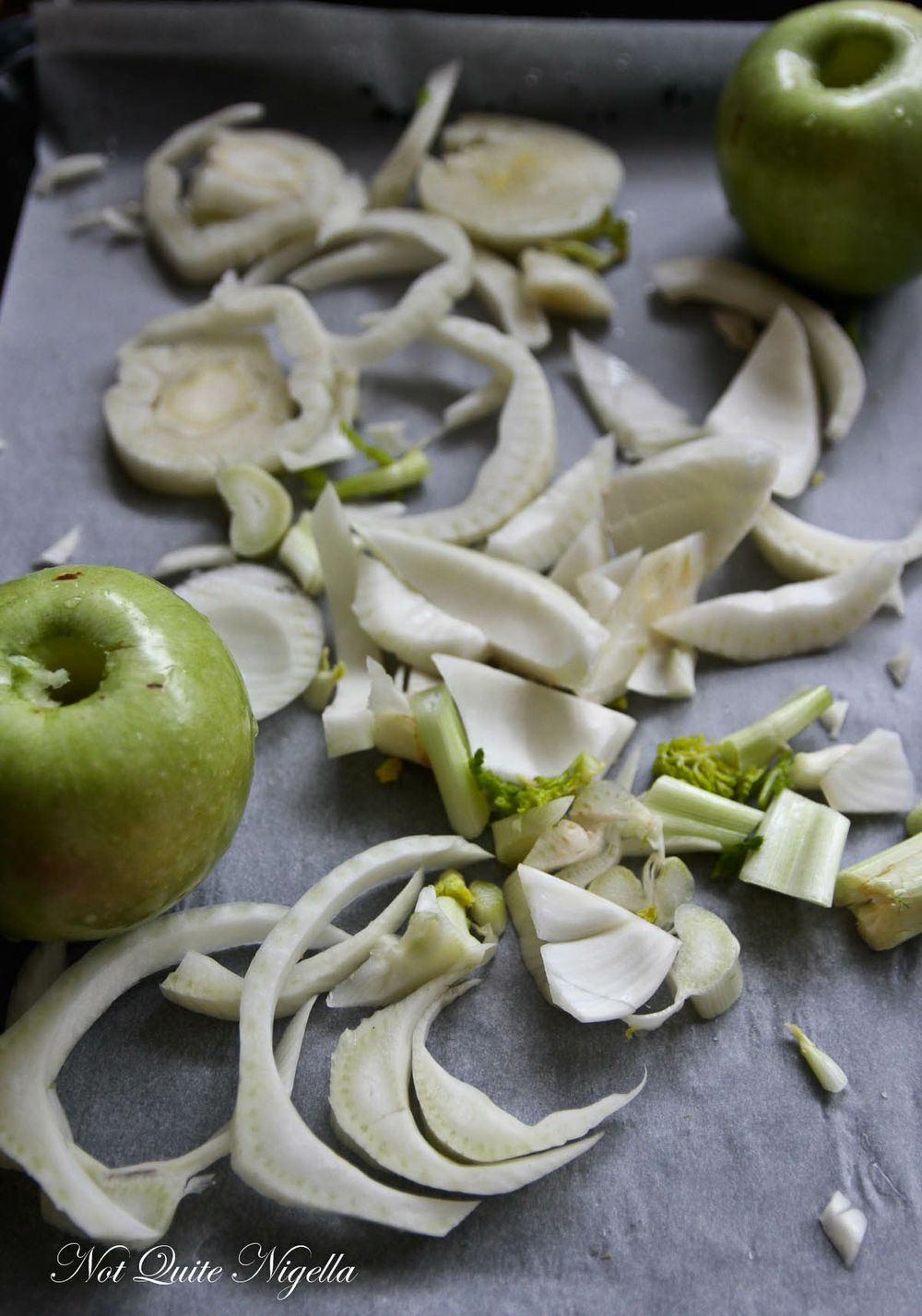 Step 4 - Make the mash by taking another tray and slicing up the second fennel bulb into small pieces (I didn't as you can see and I ended up blitzing mine in the food processor) and the cored but still whole apples on it and drizzle a little oil on top-set aside. Halve the potatoes and put them onto boil for 30 minutes until soft and mashable. Put the potatoes through a potato ricer or masher -I prefer the ricer because it catches the skin but do whatever you have to hand. Set aside.

Step 5 - When the pork has had its time and has developed a golden skin, place it on top of the vegetables and turn the heat down to 160C/320F. Put the crackling aside as you'll give this a final blast on a really high heat at the very end if you need it. Place the pork loin on a high rung of the oven and pour the cider on top and around the pork. Then place the baking tray with the fennel and apples on an oven rung below it. Bake for 30-45 minutes spooning the pork with the cider a few times during the process.

Step 6 - Take out the pork roast and drain the cider from it into a measuring jug, you should get around 3/4 of a cup of cider, perhaps a bit more. Place a sheet of foil on top of the roast and allow it to stand. 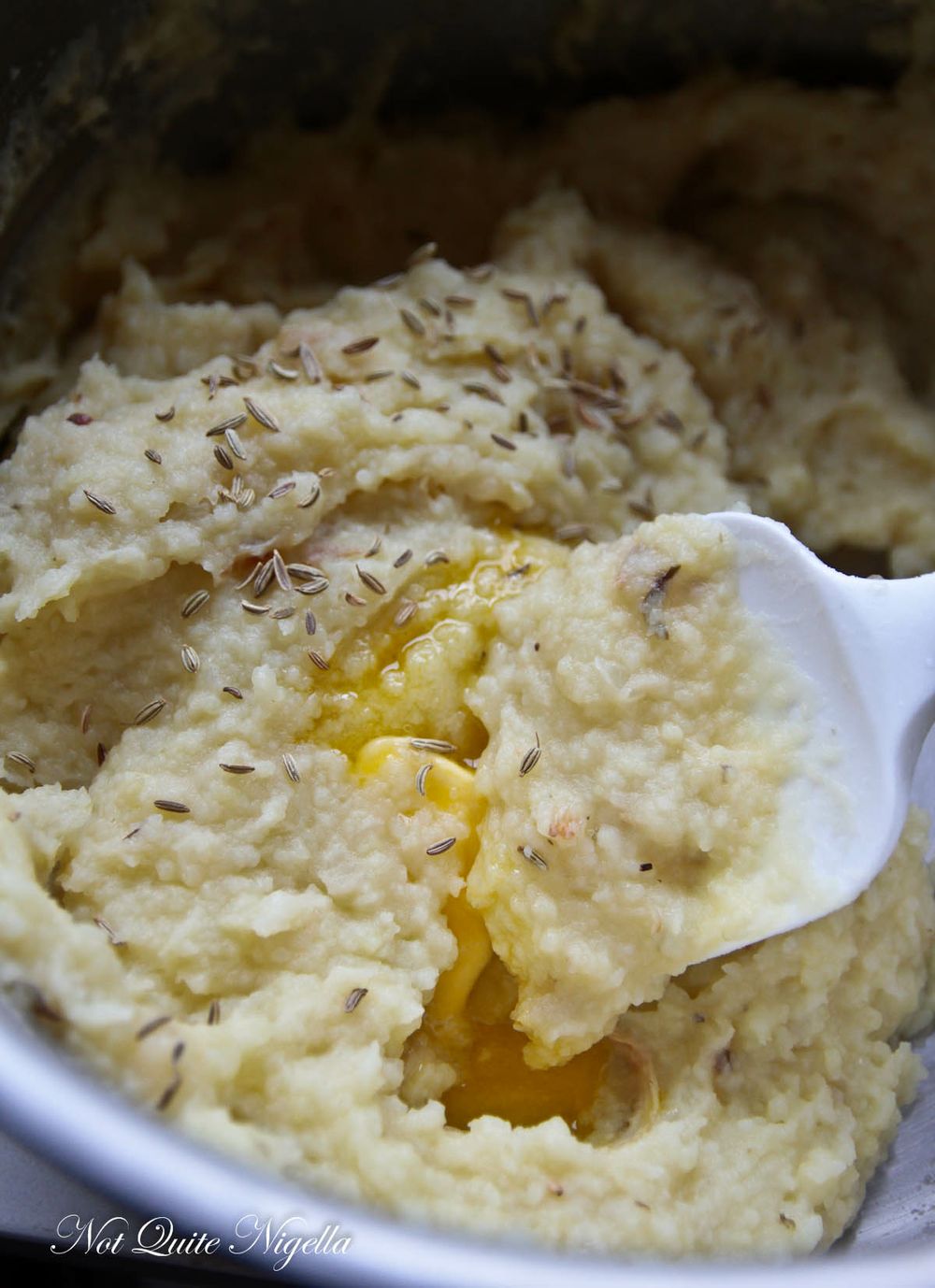 Step 7 - Make the mash by placing the already mashed potato in the same pot that you boiled the potatoes in and then add the butter, soft baked apple flesh (which if all goes according to plan with be two soft, melted mounds of applesauce and you can just discard the peel) and the fennel and stir. Add the fennel seeds, sugar, salt and pepper and taste. It's sweet, tangy and creamy with the flavour of fennel. The mash is now ready.

Step 8 - Make the gravy by heating up the cider. Stir the cornflour and water mixture as it can settle after a bit of time and when the cider is simmering, add the cornflour mixture and remove from heat and stir (too high a heat and it will separate and thin). Check for seasoning and add salt if necessary. Serve with sliced pork, vegetables, mash and gravy. 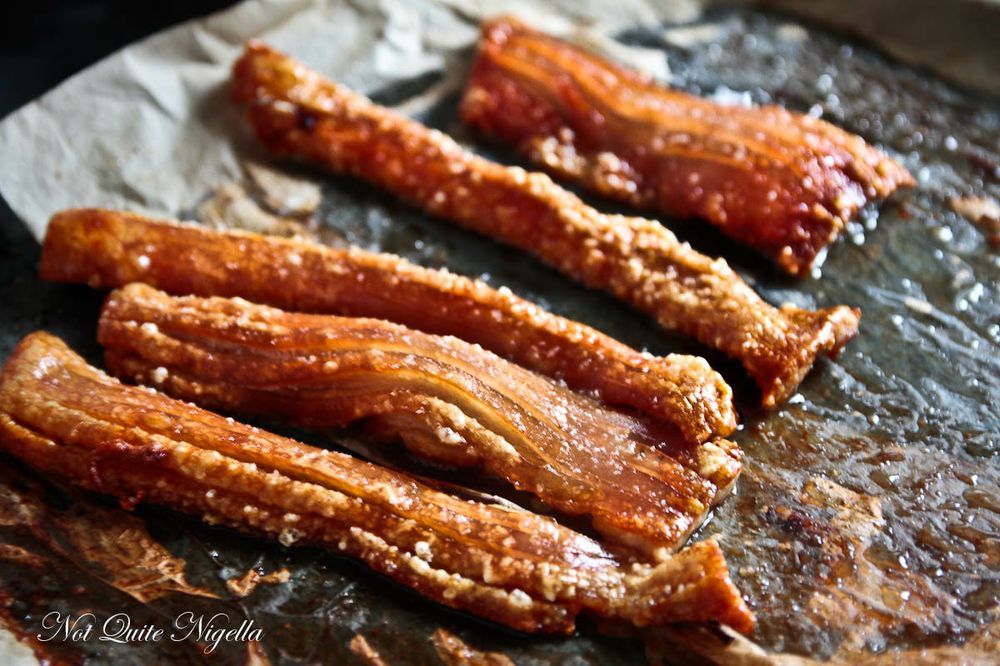