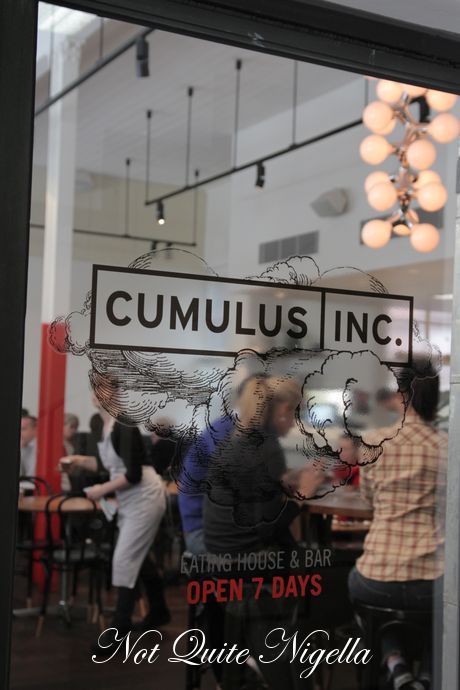 "I don't think I'm used to this...friendliness" I tell Miss K when the man that greets us at Cumulus Inc. is nothing short of friendly and courteous. It is not that we have terrible service in Sydney but usually men with expensive hair cuts, thick black rimmed designer glasses wearing all black tend to be the kind to give you an att-it-ude. So I'm a bit taken aback when they are courteous you do understand. 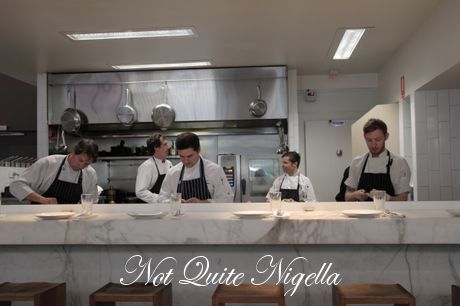 When I recently dined at Cutler and Co. , everyone asked if I had been to their other eatery Cumulus Inc.. Sadly, there is only so much stomach space in one day and Cumulus Inc. was relegated to the "perhaps one day" list. So when Miss K my publisher picks me up and asks if I've been there I practically shriek with delight. Thankfully she doesn't have a nervous disposition. It's best not to be around me and food if you do. 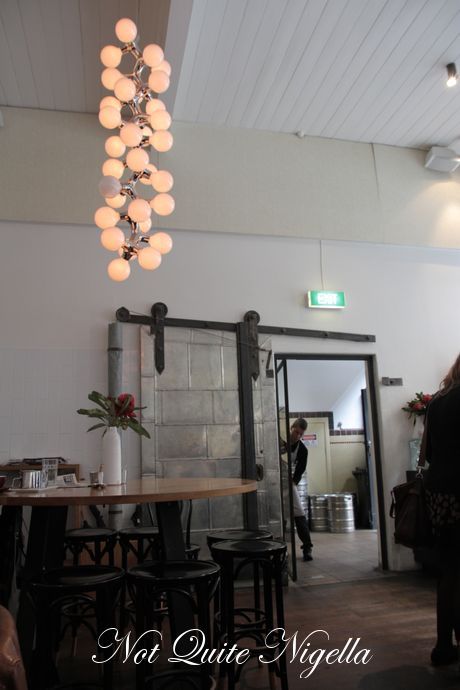 We walk the block and a half to Cumulus Inc. although I am unable to tell you in which direction. By now I've come to realise that my sense of direction is even worse in Melbourne than it is in Sydney. We take a seat and it's quite busy for a week day morning at 10 o'clock. I take a quick look at the menu and ask for Miss K's recommendations as this is one of her favorite three places to eat in Melbourne. I know I have the right publisher because she says "We've got to order different things of course". 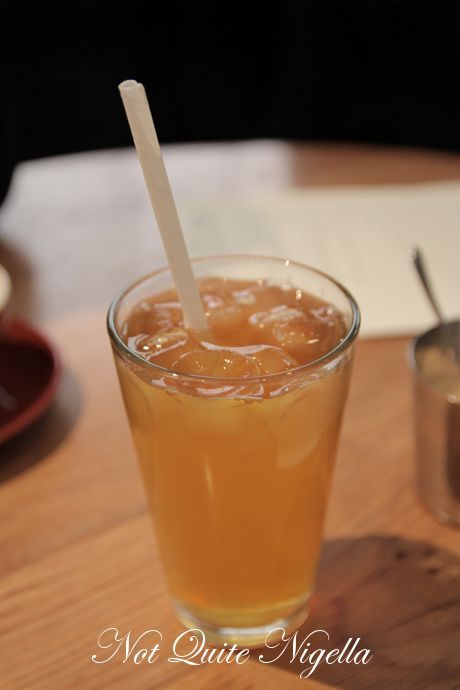 I take a sip of apple juice and it's not bad but not particularly different from other apple juices that I have tried. 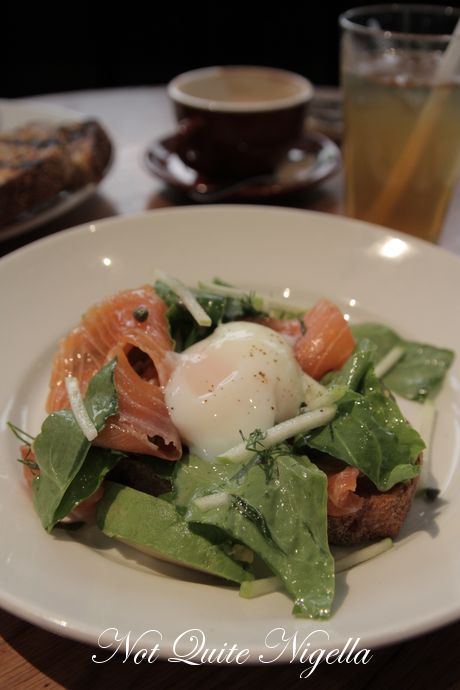 Holy heck the smoked salmon in this dish is good. Thinner and appearing more "stretched" (is that a weird thing to say?), it comes with pieces of sorrel, a terrific but underused vegetable, thin matchsticks of apple and dill which I adore with the smoked salmon. And the egg? It is an egg that has been poached for 65 minutes at 65 degrees Celsius and it is runnily gorgeous yet still slightly thicker in texture than a regular poached egg. 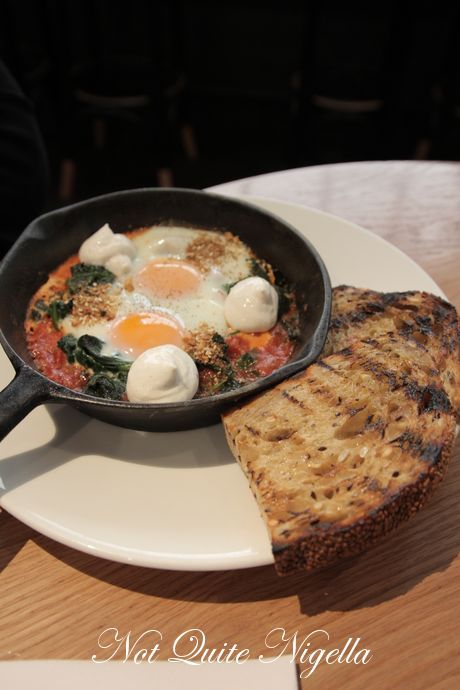 I try some of Miss K's baked eggs with delicious lightly spiced soft baked tomatoes, dukkah and clouds of tangy, creamy labne yogurt cheese. It is one of those comforting, filling meals and the grain bread gies it a satisfying crunch. 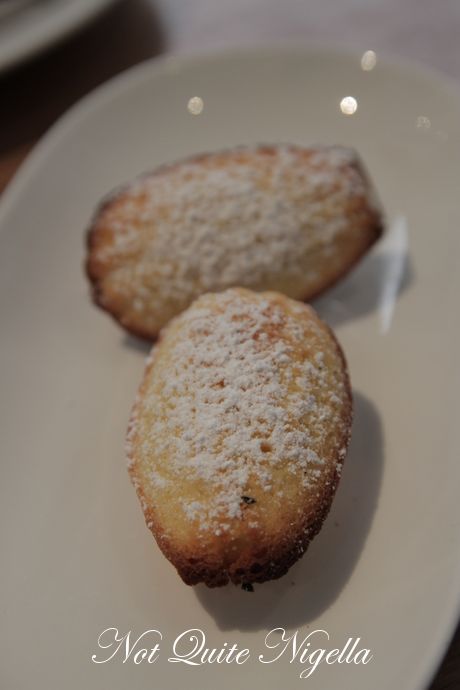 "Would you like us to place the order for the madeleines now?" the waitress asks us. The reason why she is asking is perhaps because of my incessant cooing when I saw that the madeleines require 15 minutes notice as they are baked to order. They come out dusted with icing sugar and sit proudly full breasted like a bird puffing their chest out. I can smell the eggy and lemony aroma already and I lift one to my mouth and take a bite. The lemon curd inside is like indiscernible lemon sherbet bursts. I had expected to see a dollop of lemon curd in the centre but I can't see any at all so I am left to contemplate when the next sherbert burst comes.

And Melbourne lovelies, if you happen to be near Federation Square today between 3-7pm I'll be there for the Cornetto Endless Summer launch and making a general fool of myself :P A few Sydney readers asked if there was going to be a Sydney launch but there isn't one in Sydney I'm afraid (how much fun would it have been to have it on a beach like the ad?) as the launch was moved to Melbourne.

So tell me Dear Reader, do you find it hard to find your way around a new city? 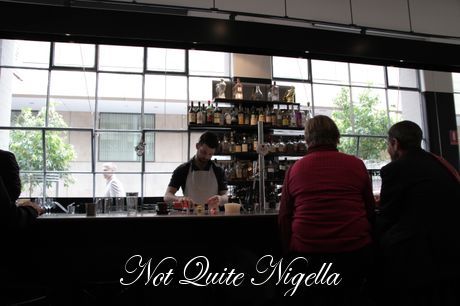 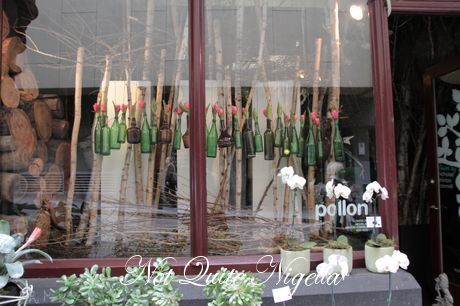 A cute shop window on the way

Open Monday to Friday 7am until 11pm

Saturday and Sunday 8am until 11pm