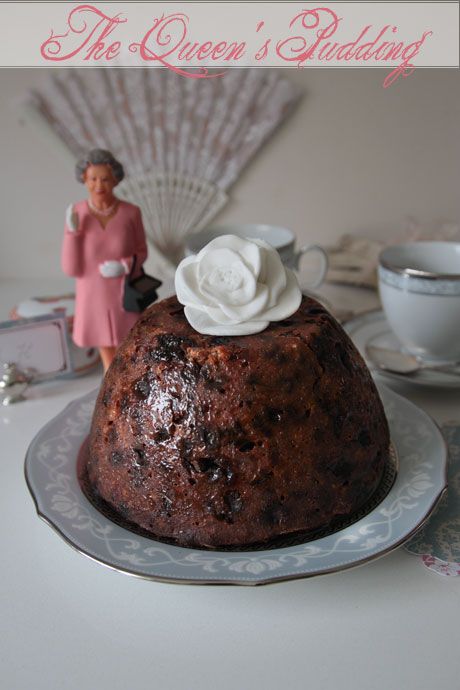 Mr NQN and I were shopping the other day. Well more correctly I was dragging him along to the shops and he was dragging his heels. He is usually fine as long as there's a comfortable place for him to sit and an internet connection but there wasn't in this case. I told him that if I had my own shop I would make sure that the bored menfolk would have their very own lounge and internet connection so that we could shop in peace. There would be a buzzer system where we could summon them to the changeroom for their opinion when needed.

"So, what would you call your shop?" he asked me.

"Hmmm....something about owls. The name Hooters is obviously out" I quickly added.

"And what would you sell?"

I started to get excited "Well I'm glad that you asked because I've thought about it! Of course I'd put some taxidermied owls in the window or other forest creatures. Or if I could I could have real owls but perhaps the local council wouldn't like that unless they were Harry Potter fans. I'd sell things that I find interesting...like that." 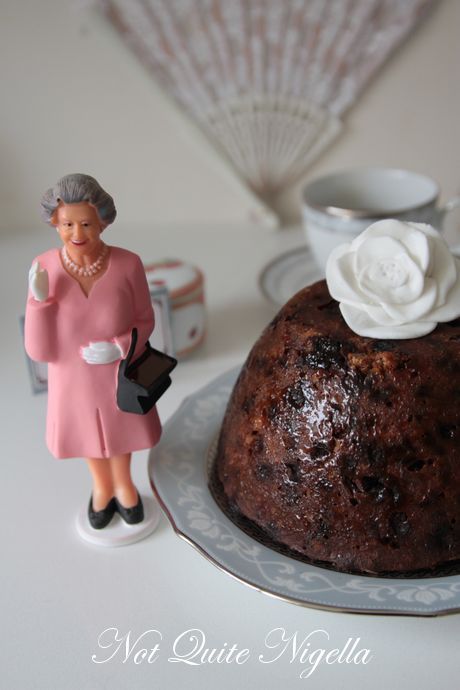 I pointed at a window. We were in the Blue Mountains over Easter and we had stopped in front of a shop with a window full of waving Queen Elizabeth II statuettes. The figurines were solar powered and upon closer inspection the solar panel sat on top of her handbag. It was fabulous and I knew just who I would buy it for. And before I would give it to them she would figure in my Queen Elizabeth II pudding recipe photo. 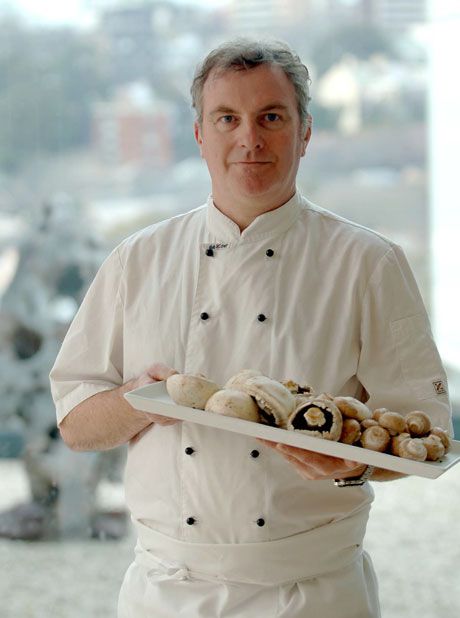 Yes this pudding recipe is Queen Elizabeth II's very own recipe. And how did I get a hold of it? Well I was lucky enough to meet chef Peter Morgan-Jones who worked for Buckingham Palace a few years ago. I was at a lunch hosted by the Trippas White group who cater for the Art Gallery Restaurant, the Botanic Gardens restaurant and 360 Bar & Dining among several others. Peter is the group executive chef across all of the restaurants. He is a quietly spoken, lovely man and when the talk turned to the upcoming royal wedding, he mentioned that he used to work at Buckingham Palace and that he had the Queen's Christmas Pudding recipe. Excitedly I asked him if he could share it and he told me that he could! Fascinated I read through the recipe. There was no month long steeping of fruit but there was stout, suet and grated carrot and apple. 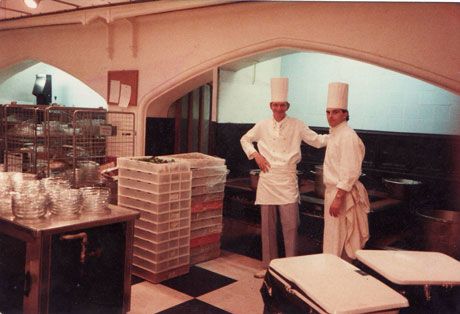 Peter Morgan-Jones in a palace kitchen on the right

I must admit that I find the whole concept of royalty fascinating. And while I'm not vehemently pro or against I put them in the same category as celebrities. If I like what they say or do I like them but if they don't then I don't like them and I don't take take a general stance on them. But I am absolutely fascinated in taking a peek into their world. What do they eat? Are they like the rest of us? And it seems I had met someone that could tell me all about them from a food perspective which is just what I was interested in!

Peter was a royal caterer for five years and he spent time working at Buckingham Palace , Windsor castle , Highgrove & Kensington Palace (for Charles and Diana), Clarence house (for the Queen mum) and Gatcombe park (Princess Anne). He also ran the Buckingham palace garden parties which were affairs with 8,000 guests and "We used to make 16,000 sandwiches and serve 10,000 cups of tea." And what were each of their tastes like? 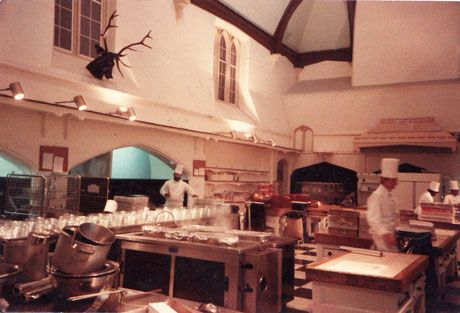 The Buckingham Palace kitchen-note the stag!

Well according to Peter, Charles eats organic fare from his estate at Highgrove. He didn't eat red meat but occasionally would eat poultry and fish and Princess Diana would eat the same. The Queen and Queen Mum both loved traditional fare e.g. roast beef and Yorkshire pudding. For breakfast she would eat wholemeal toast (dry, from what he saw) and porridge. Her husband the Duke of Edinburgh (Prince Philip) was partial to game with Peter cooking at many pheasant shoots on their shooting estate in Tetbury, Gloucestershire. Peter would also cook for Prince Charles when he would entertain at Highgrove. Charles would host barbecues for all his farming land renters (Duchy of Cornwall) which would feature beef burgers, sausages , lamb brochettes , salmon kebabs, salads  and bread. See, they're just like us! Well not really ;)

He got to meet all of the royals although he did not formally meet the Queen as it takes five years before an introduction. Peter explains "The others are very approachable, just usual royal etiquette . Speak when spoken to and do not raise a question first. I met Princess Diana at Highgrove and we had a chat in her kitchen over a cup of tea on a couple of occasions. She was very warm and approachable. Prince Charles was also very social, dropping the occasional jokes etc." 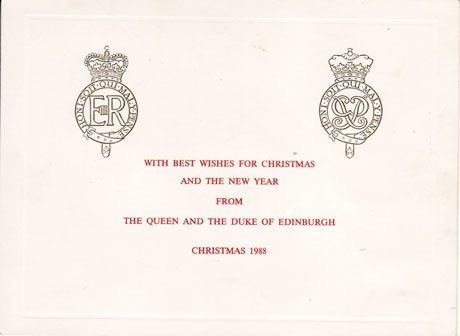 As for this pudding, annually "We used to make 1,600 (of the puddings). I used to get one back each Christmas as a present from the Queen" Peter says. The Christmas pudding is of course out of season but I figured fruit cake and Christmas pudding are very similar creatures-cousins at least with the differences being the use of suet and breadcrumbs and the pudding being steamed rather than baked. And of course I wasn't in a position to call the Queen up and ask her for her wedding cake recipe. Peter tells us that "Christmas pudding is traditionally served warm with brandy sauce /ice cream or custard. This recipe is very moist and I used to eat it cold. It is also good crumbled into ice cream to make Christmas pudding ice cream." 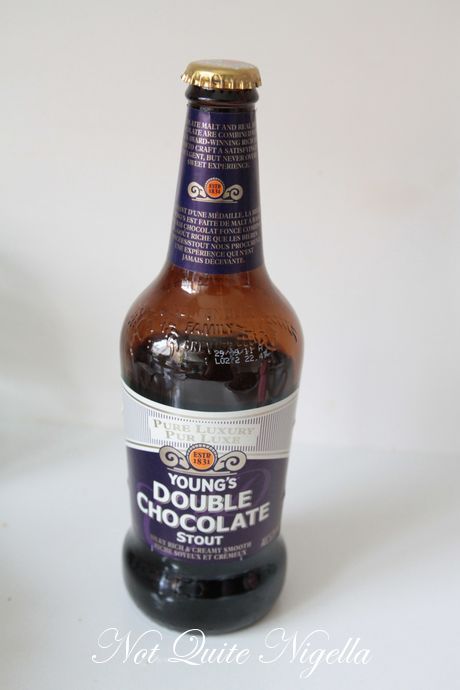 This recipe does take eight hours of steaming. Yes eight hours. So I figured it was about perfect for the night of the wedding if you were so inclined and staying up for it. I kept it as authentic as possible by buying English stout rather than using beer although the only English stout was a chocolate stout (and hey when is adding chocolate a bad thing?). I also found myself some suet last minute from Victor Churchill although Peter advises that usually giving your butcher three day's notice is wise as it's not always an item that they stock. 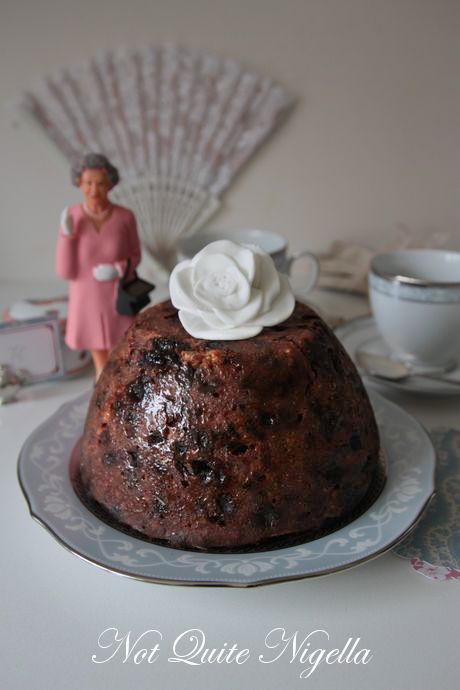 As it was I started it around 6pm one evening and by the time it was steaming it was 6:30pm and I had to set alarms every two hours to keep topping it up with boiling water and a 2:30am wake up call to turn the stove off. And if there is one thing I would recommend, it is putting it in a large steamer pot. I had one that held a reservoir of 2 litres of water under the steamer insert which meant that I didn't have to worry about it boiling dry and  I could just check on it every 2-3 hours instead of more frequently. After eight hours, bleary eyed, I turned it off and then went to bed just hoping that the thing was cooked and at that stage not being even mildly curious just wanting some sleep. 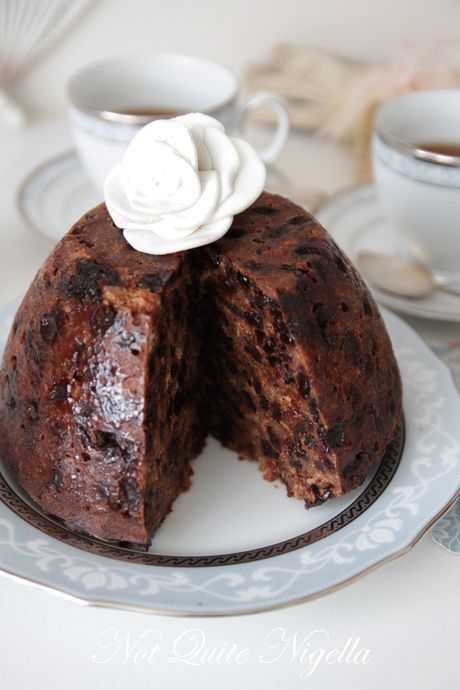 The next morning, the pudding has cooled so that it was easy to handle. I took the lid off and peered inside it. Would it budge? All I had done was greased the pudding tin. I lifted the parchment disc and the pudding looked cooked which was an immense relief to me. The pudding was lovely and moist and packed with a generous amount of fruit and Mr NQN and I devoured it with much relish and then went back for more. I will be saving slices of this to eat with brandy custard when we watch the Royal Wedding tomorrow night on television.

So tell me Dear Reader, will you be watching the Royal Wedding?

Makes 2-4 puddings depending on the size of your pudding basin. This made two 1 litre puddings 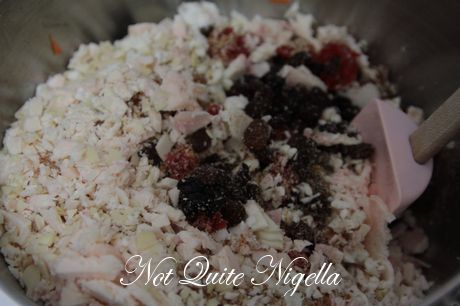 Step 1 - Place the dry fruit and cherries and rind in the biggest bowl you can find, with the apple and carrot and almonds. Add the beef suet and mix together. Stir in flour, breadcrumbs, salt mixed spice and cinnamon and brown sugar. 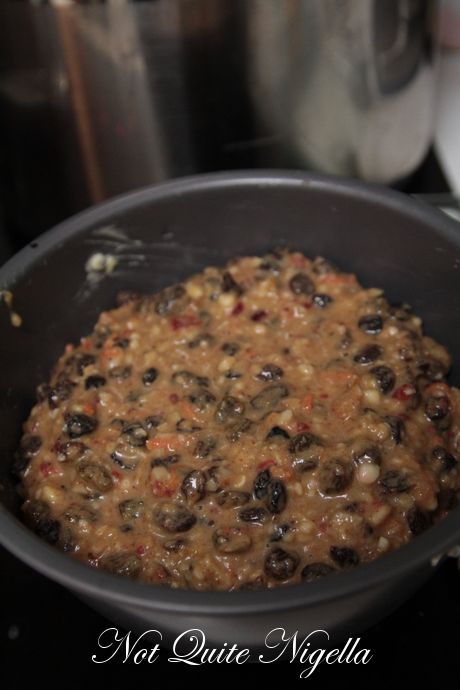 Step 2 - Whisk the eggs until frothy. Add the ale, brandy, orange and lemon juice. Knead mixture together vigorously until well blended, spoon into four 750 ml pudding basins, cover with buttered greaseproof circle, and make sure pudding is not to the top of rim. 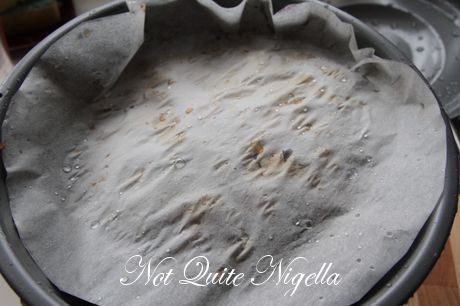 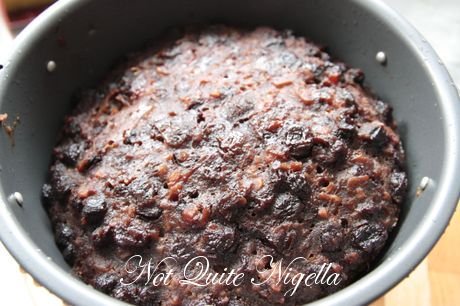 Step 3 - Cover pudding with aluminium foil and put a side plate on top to make a seal. Steam for 8 hours. When cool, place plastic lid on pudding, or use calico. Can be stored for up to 12 months.

To reheat, steam for 2 hours or place in the microwave (remove foil from top if using foil). 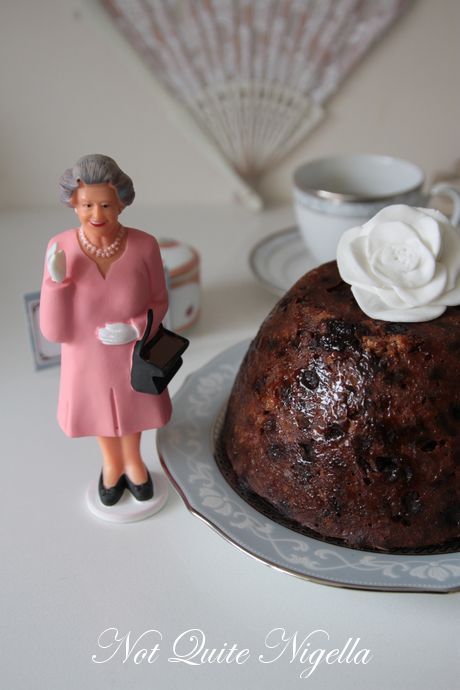