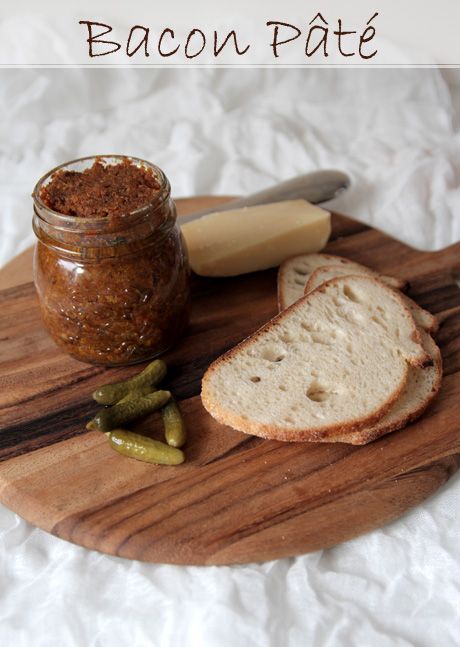 Despite all preconceived gender stereotypes, and despite the fact that I love weddings and the colour pink, I have to admit that I'm not the most romantic person. Take this year for Valentines Day, I wrote all of you Dear Readers a post on Valentine's Day and how we never really did anything special for it. It was only when Mr NQN later read the story that he remarked to me.

"We do nothing huh?" smirking "Don't you remember that I proposed to you on Valentines Day?"

My hand flew over my mouth and my eyes widened. Good god he did! And it was an utterly memorable Valentines Day indeed! Luckily he has a sense of humour about it and I think he saved that one up mentally for whenever he is caught short without a gift for Valentine's day or an anniversary.

Then cue my next fumble. I was going to be away on our anniversary this year and not only that, I didn't tell him the proper way. I just mentioned it in passing while we were watching television. Another strike for The Good Wife (which by the way is _such _a fabulous show, how great was the end of Season 2?). 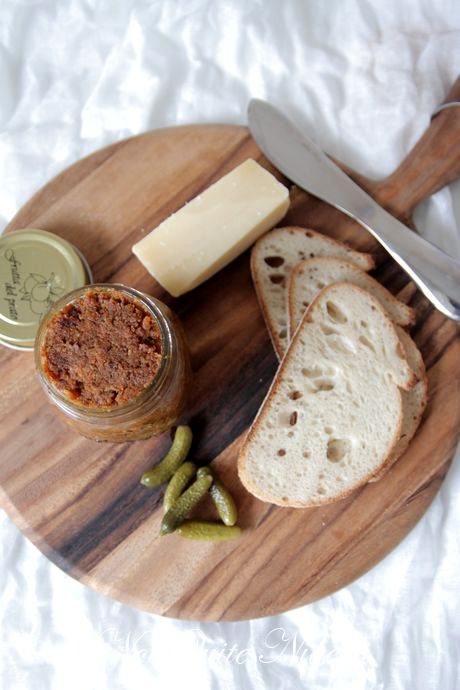 But Your Honour,  in defence of my Good Wife status, I did however make him bacon pâté for part of his anniversary gift. You see the poor dear is quite helpless when I go away and simply doesn't eat the entire time (I don't understand it either). It may not be the most fanciful anniversary present but I decided that I am a practical gal and the man needs to be fed or he will starve. And he grew up being given rocks from the garden for his birthday (one year his brother received a rusty clamp from under the house that was actually already his) and assorted strange things so I felt like he had had a lifetime to prepare for odd gifts.

The bacon pâté recipe is again another recipe from my friend Faith. It is an easier to make version of my bacon jam recipe, a sister of bacon jam if you will although I will refrain from calling it the "easy sister of bacon jam" because that sounds a bit wrong. It is less sweet as it is a pate and it is easily made in less than an hour which is a time saver on the bacon jam. Faith used turkey bacon in hers but I used regular bacon and it tasted fabulous. I ceremoniously presented it to Mr NQN one evening informing him that this was his anniversary present. And what was his response? Remember this is the man that grew up getting rocks for his birthday ;) He simply grinned broadly and said delightedly "Thankyou mon cheri!"

I suppose anything is better than rocks...

So tell me Dear Reader, do you ever make food presents for people? And do you like receiving food gifts? 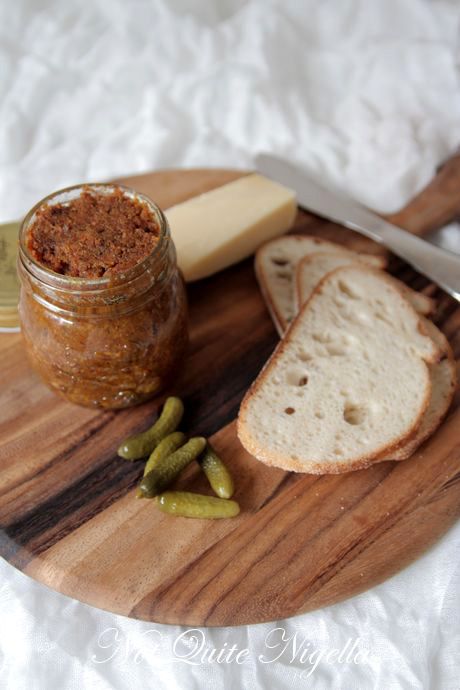 Adapted from Faith at An Edible Mosaic

Can be made up to 3 days in advance

1. Heat 1 tablespoon of oil in a medium saucepan over medium heat; add bacon and cook until crispy (about 5 minutes), stirring occasionally. Remove bacon with a slotted spoon and set aside for now.

Step 2 - Turn heat down to low and to the same pot, add the remaining 1 tablespoon oil, onion, carrot, and bay leaf; cook until the veggies are softened (about 15 minutes), stirring occasionally. Add garlic, chives, and thyme and cook another 2 minutes. Cool slightly, then transfer the bacon and veggies to a food processor along with 1/2 c water; puree until smooth, making sure to scrape down the sides of the bowl a few times. Or just use a stick blender like I did (I used my Braun cordless stick blender which I am completely in love with). 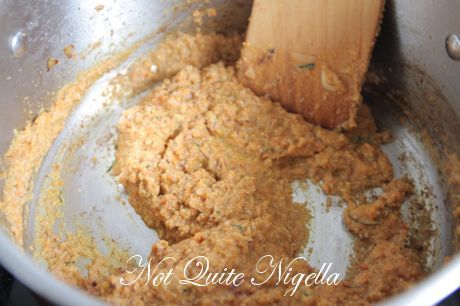 Step 3 - Transfer the puree back into the pot and add vinegar, brown sugar, tamari, and pepper; bring up to a boil, then turn heat down and simmer until it forms a smooth, thick paste (about 25-30 minutes), stirring occasionally. 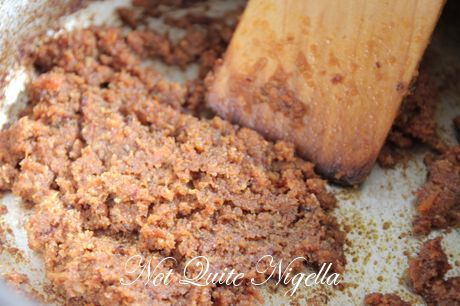