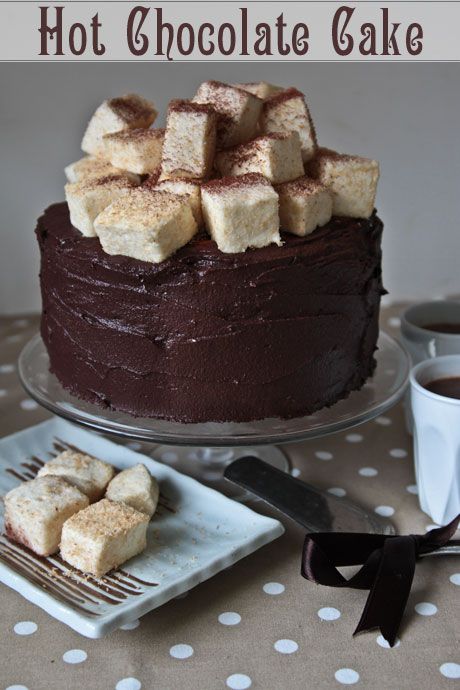 Ahhh June 2011. It was supposed to be the month when my book was published. I know postponing the book's release date to April 2012 to include a chapter where I got to interview the Domestic Goddess herself Nigella was the best thing for the book. However I am notoriously impatient. When Mr NQN was asked to give five words to describe me impatient featured twice. Unamused should have followed shortly afterwards! ;)

Still, knowing that it is a better and more complete book because of my meeting with Ms Lawson doesn't make it any easier to stay behind the start line but I know a book isn't like a blog where you can add another chapter or story. Once it is printed it is printed. One thing that the extra time has allowed me to do is test the recipes at leisure. Whilst the book is a memoir and not a cookbook, there are a dozen or so recipes that feature at the end of certain chapters where they fit into the story. 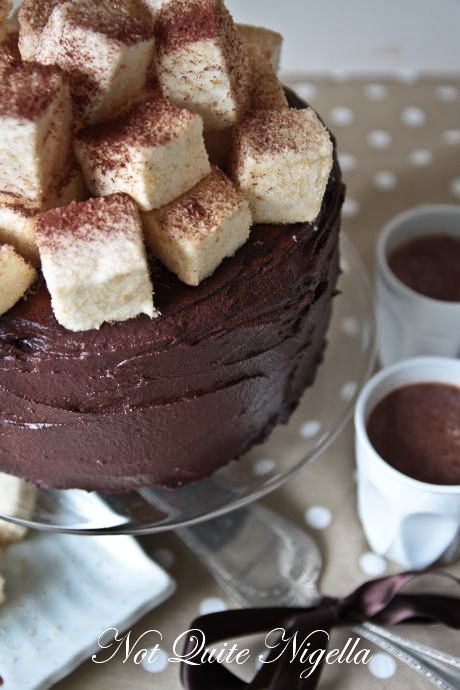 In the editing process a few chapters were edited out. These chapter were about how my book deal came about and my publisher felt that they took the reader outside of the book that they were holding. I initially included them as I thought that people might be interested in how the book deal came about as it took quite an interesting path and it was nothing and I mean _nothing _like how I thought book deals happen. I remember reading Stephenie Meyer's blog about how her book deal came about and it was very different to mine and many others. I also feel everyone has a book inside them and some readers, blogger or not, are hoping to become published. My publisher Miss K. suggested putting the chapters on the blog which I thought was a great idea and I shall do closer to the release date if anyone is interested.

In the meantime, I am busy having recipes tested. All of the recipes have been tested by myself in order for me to write them but I have enlisted the help of three people to test out my recipes so that they are bulletproof. Mr NQN is my first, having only cooked four times in his life (I don't count boiling pasta and topping it with cold sauce from a jar as cooking). My mother is my second tester who is a great savoury cook but not a baker and the third is my friend Nic who is a keen baker and spoke music to my ears when she volunteered to help me test the recipes. It was too much to ask of a non family member to do and I gratefully accepted her offer. 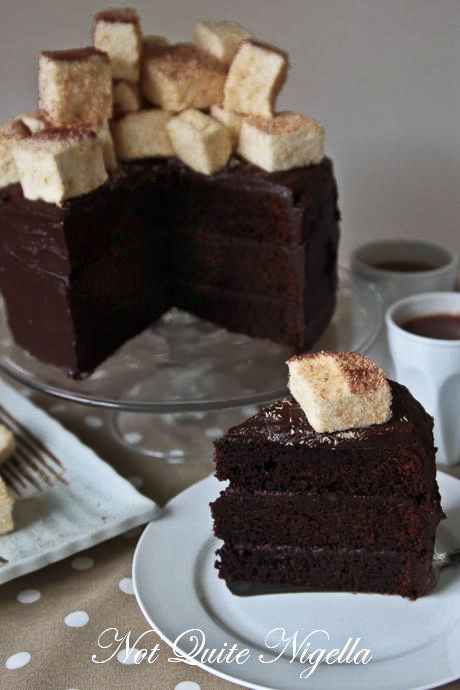 One recipe that isn't in the book as it isn't mine but I decided to make was this Hot Chocolate Layer Cake with Marshmallows. I got this recipe idea from Arwen who blogged about a "Hot" chocolate cake with the heat in the cake itself. The chocolate cake was richly spiced with cinnamon, black pepper and cayenne pepper rather than hot in temperature. I liked her idea but I wanted to incorporate marshmallows into it so I did some searching and found a recipe for a Hot Chocolate Layer Cake with Marshmallows which I would just add the spicy seasonings to. The cake is moist, chocolatey and rich and the hint of spice lends it an interesting dimension beyond your regular chocolate cake. And the marshmallows? Well they'll just have you wondering why all cakes aren't topped with them!

So tell me Dear Reader, would you be interested in reading about how the book deal came about? And do you have a book in you and if so, what is it about? My publisher reads NQN so who knows, she might be smitten with your idea! ;) 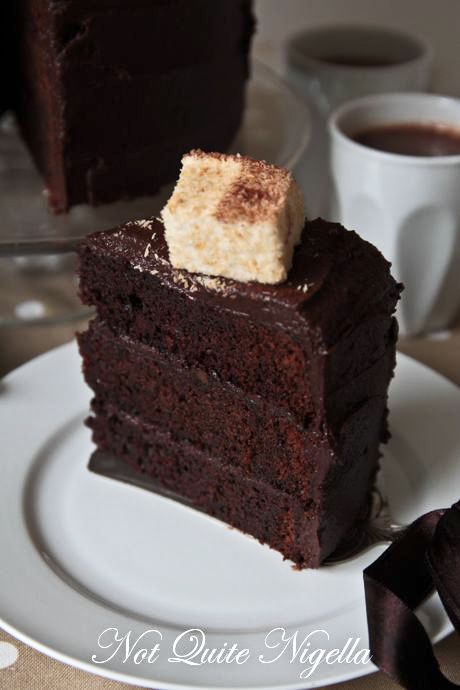 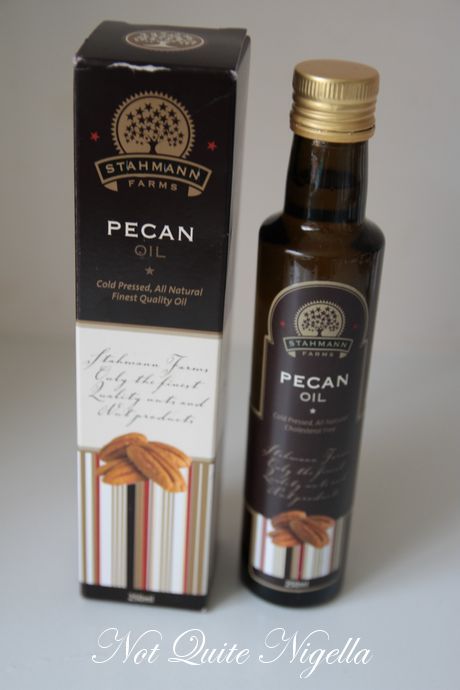 Step 1 - Firstly make the frosting as it will need to set overnight or for a few hours: In a large saucepan on low heat combine cream and butter and melt butter without boiling. Whisk in the chopped chocolate until melted. Whisk in icing sugar, cocoa, syrup and salt. Pour into pan and refrigerate overnight. 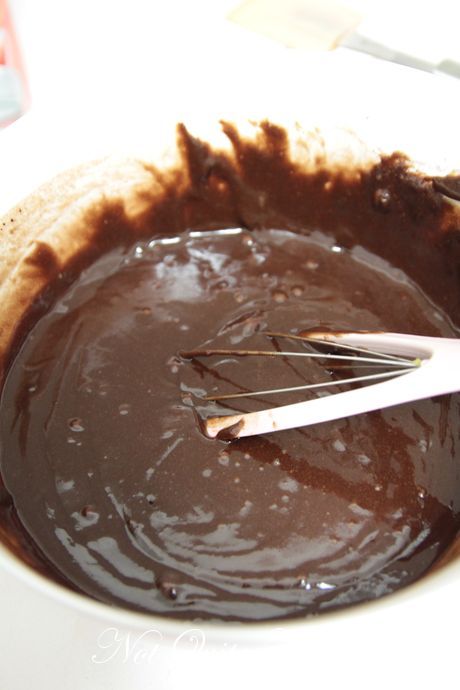 Step 2 - Line 3 x 20cm 20/8 inch baking tins with parchment and preheat the oven to 180C. In a saucepan combine butter, oil, chocolate and water and melt on medium heat until chocolate is completely melted. 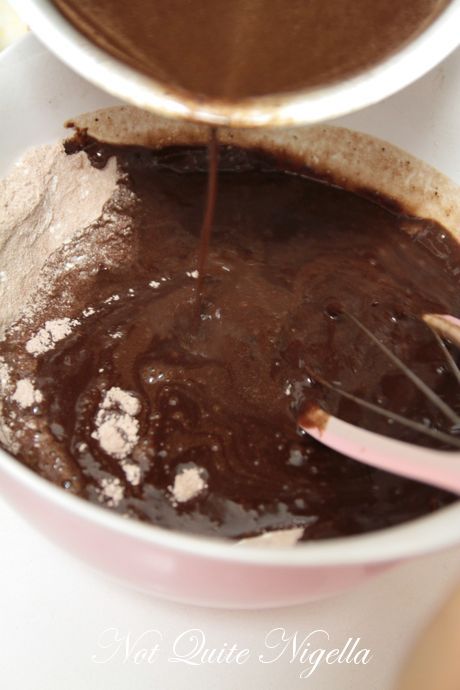 Step 3 - In a bowl, add flour, sugar and cocoa. Whisk together until combined. Pour the chocolate mixture into the flour mixture gradually until combined and whisk until smooth. Whisk in eggs one at a time. Then whisk in buttermilk, and vanilla. Take out the whisk and using a spatula add the pecans, baking soda, salt, cinnamon, cayenne pepper and black pepper and stir to combine. Divide the mixture into three parts into each of the tins and bake in the oven for 40 minutes until a skewer inserted comes out clean. Don't bake the tins underneath each other rather alternate them halfway during the cooking process. Cool. 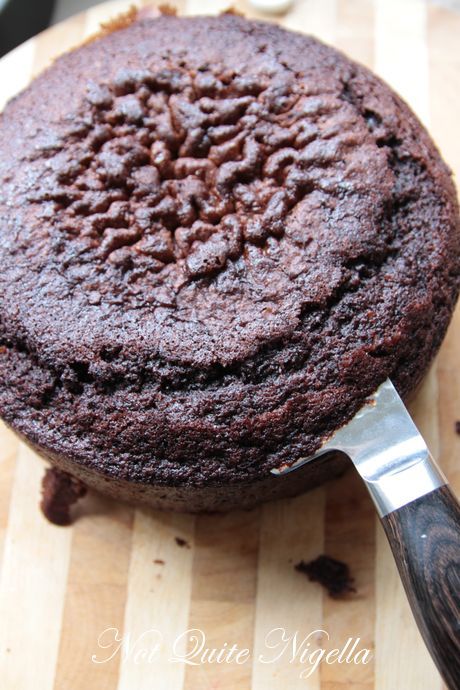 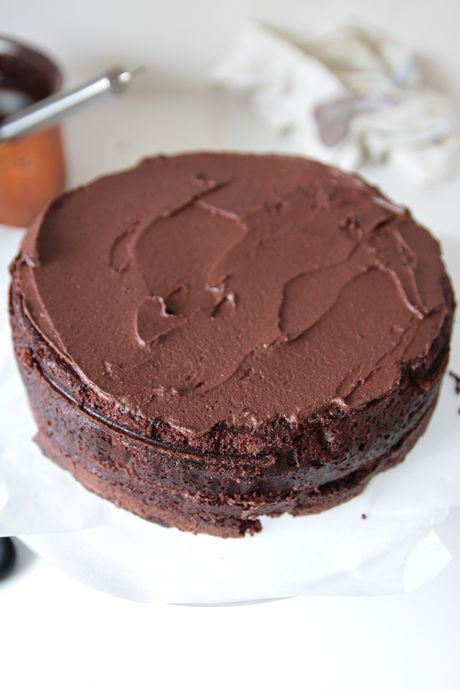 Ice between layers with the frosting 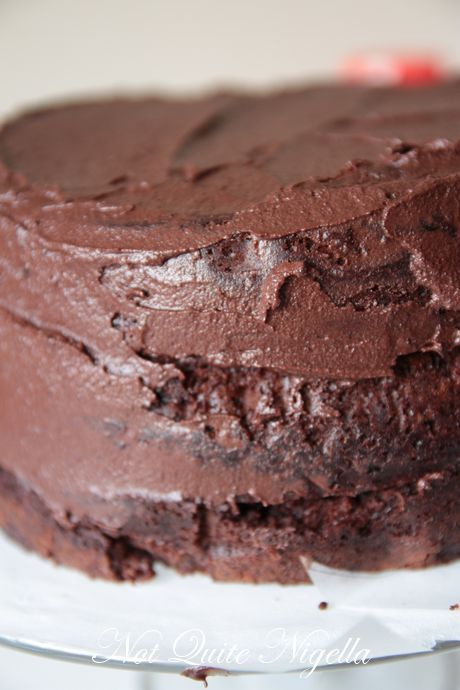 And on the sides. See those gaps? We're going to fill them with frosting and an angled spatula like spakfilla :D 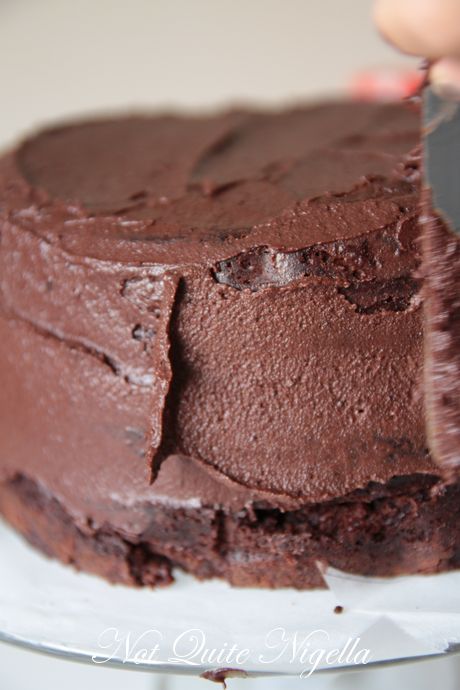 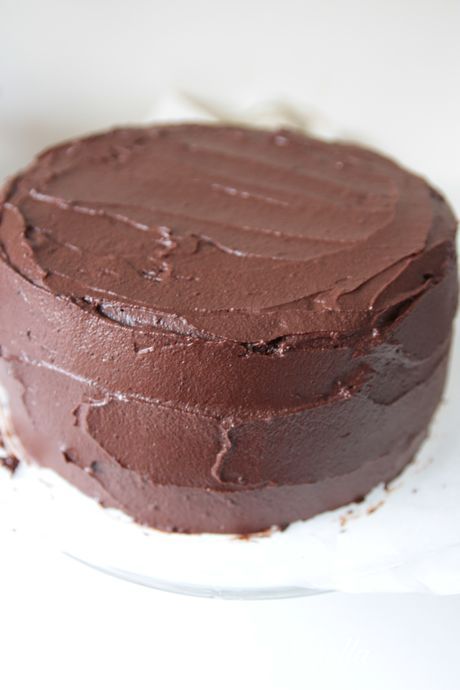 And voila, you have your first base coat of frosting aka the crumb coat so that any cake crumbs don't show up on the outside frosting

Step 4 - Place the cake on the serving dish and place strips of baking parchment underneath to make it easier to keep the plate neat and clean. Slice off the domed top from the cake layers (keep for a trifle perhaps or cake pops) and place one layer on the plate. Spread with some of the icing and then place the next trimmed cake layer and then the third layer on top. Then spread a thin layer of icing around the entire cake-this is called a crumb layer. Refrigerate until set for an hour. 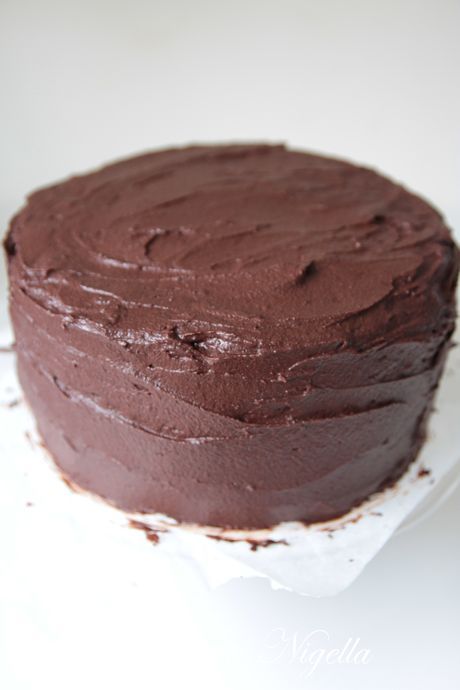 After refrigerating the crumb coat, then add a final coat of frosting-you can be generous, I had about a cup left over of frosting (cook's treat of course ;) )

Step 5 - Spread the remaining icing over the whole cake. Then top with toasted marshmallows. Stand back and prepare yourself for marriage proposals... 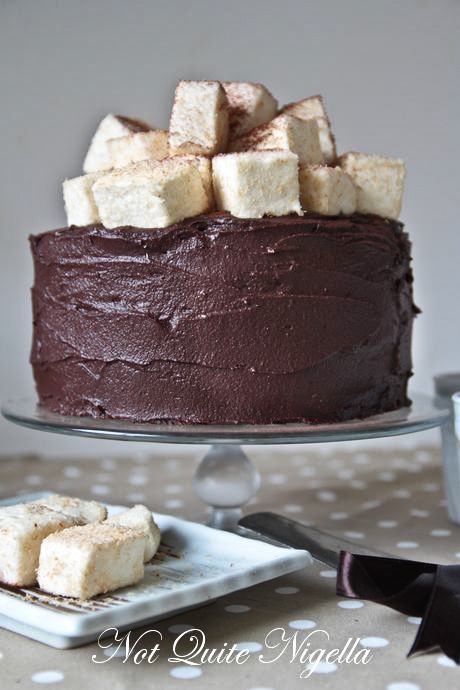