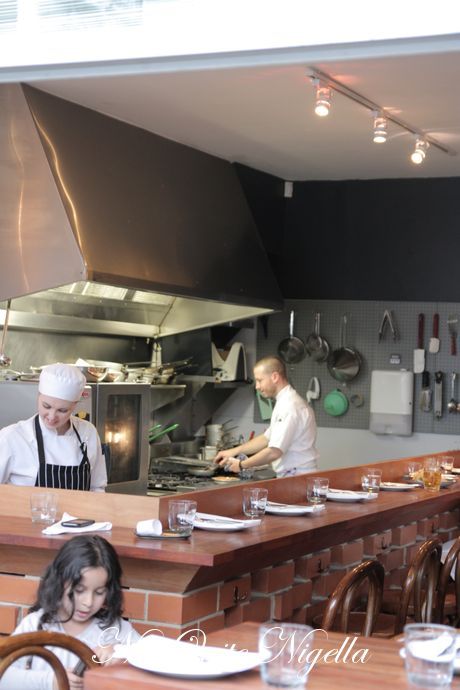 What's the first thing that you think of when you hear the word Huxtable? The Cosby Show family right? I'm not familiar with anyone else with the name so we have Cosby Show episodes on the mind when we walk into Huxtable on Smith Street in Collingwood after a short pleasant fifteen minute stroll from the Park Hyatt. The space is modern although no, it's not a replica of the set (although a part of me thinks that that might be fun but perhaps taking the theme a bit too far). 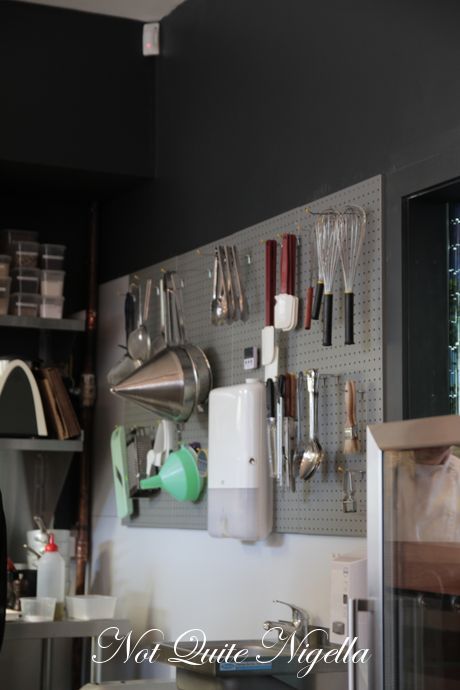 And like Central Casting has placed some extras inside from the couple with the retro glasses-thick rimmed enormous white rims for her and Bill Lumbergh style glasses for him. There are three families in the immediate eye view, all with young children. Apparently naming your place after one of televisions most famous families has families coming in early on a Saturday night. The interior is fitted out using a lot of browns-there are brown vinyl swivel chairs and what looks like dad's garage tool holder which in this case holds cooking tools. And playing in the background are songs such as Marvin Gaye's "I Heard It Through The Grapevine" and "I Got You Babe" by Sonny and Cher. 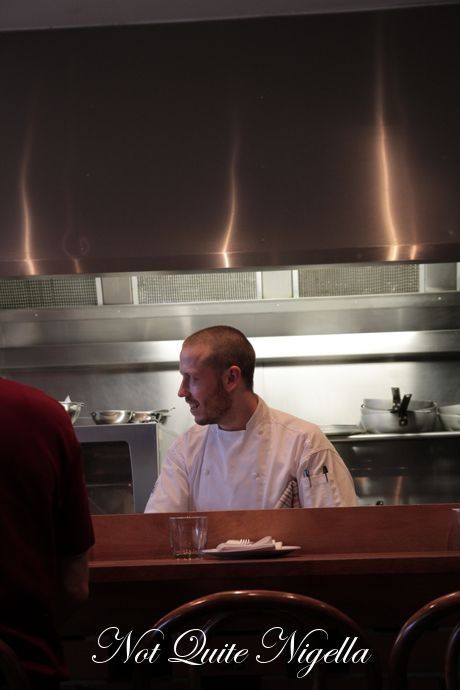 Why is it called Huxtable? We ask the waitress. Well it seems that it is called Huxtable as a nod to The Cosby Show. The three guys that head it up are from New Zealand and they thought that it would be a fun name. They are Daniel Wilson in the kitchen (the chef), Dante Ruaime formerly of MoVida (the restaurant manager) and Jeff Wong who owns 19 Squares, a St Kilda cafe (the coffee guy). "And it's just a coincidence that everyone that works here is from New Zealand" our NZ accented waitress says. 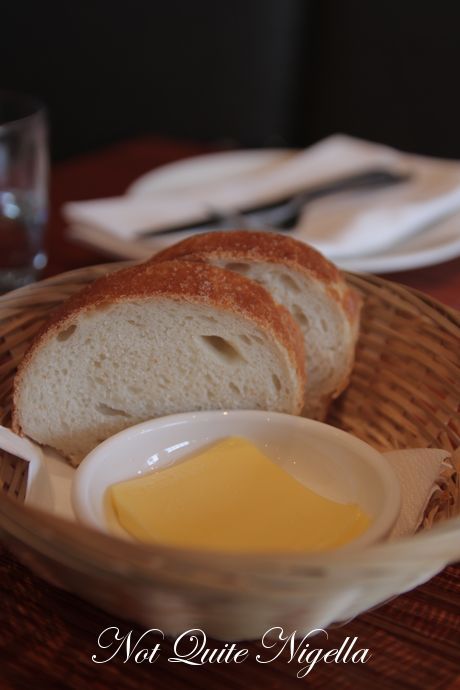 The menu is designed to share. It's broken up into little bites-and some from bite sized morsels to slightly more substantial entrees, to share plates which are broken up into sea, land and earth. 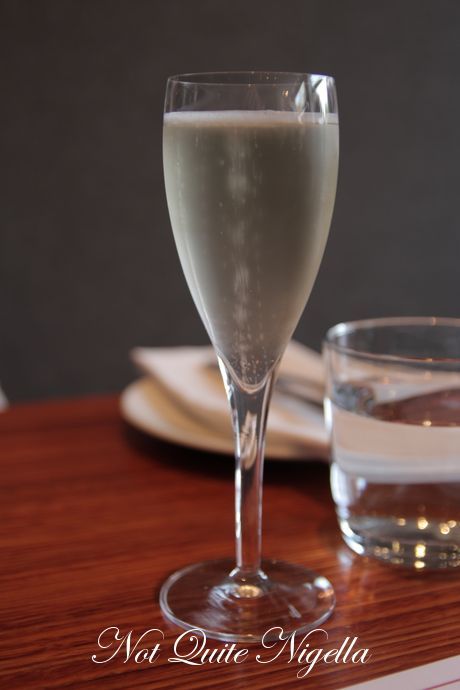 We start with the huxta bubbles which is a sparkling wine made especially for them. We ordered it for the name-who could resist it? Even Mr NQN who doesn't like sparkling wines quite likes this fizz. 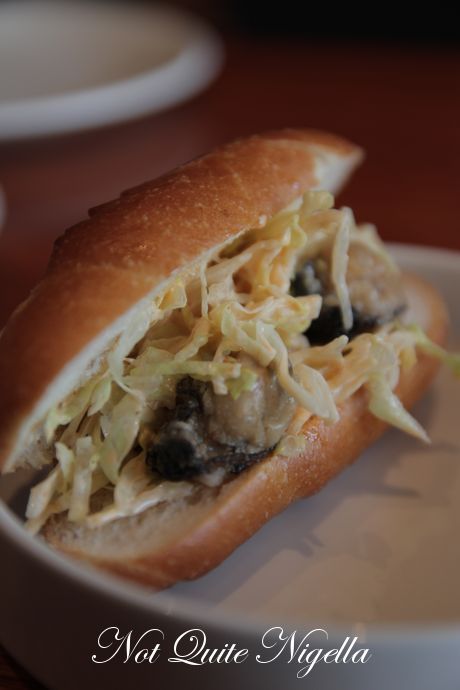 The oyster po' boy comes a mini crunchy fresh baguette filled with two oysters. The baguette is crunchy, like those Vietnamese baguettes that are earth shatteringly good and give the soft oysters inside an appealing crunch on the outside. There is a shredded iceberg lettuce salad tossed in sriracha mayonnaise, sriracha being that omnipresent Thai hot sauce that you see on tables in large plastic red bottles so there's a bit of spice along with the creaminess. And I could have eaten lots of these. 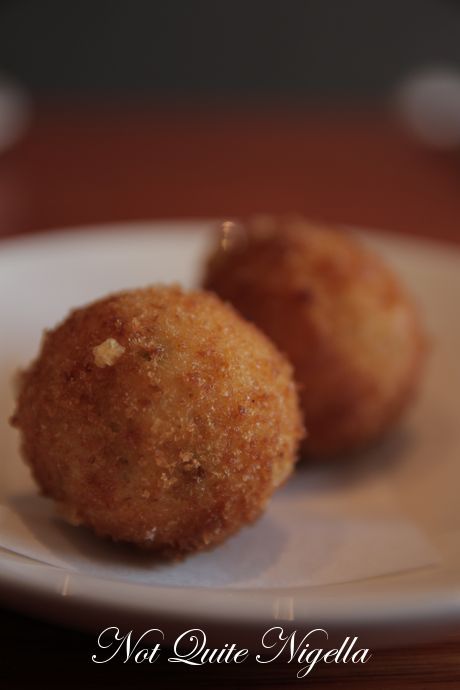 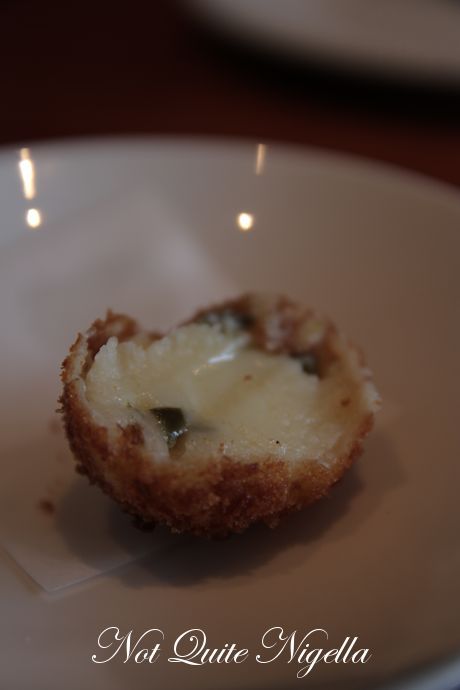 The croquettes have a thin, crunchy shell on the outside and a cheese and diced jalapeno chilli interior which makes it spicy but not heart-racingly so. Again another one that if I were being served these at a cocktail party I would have ask the waitstaff to park the tray in front of us. 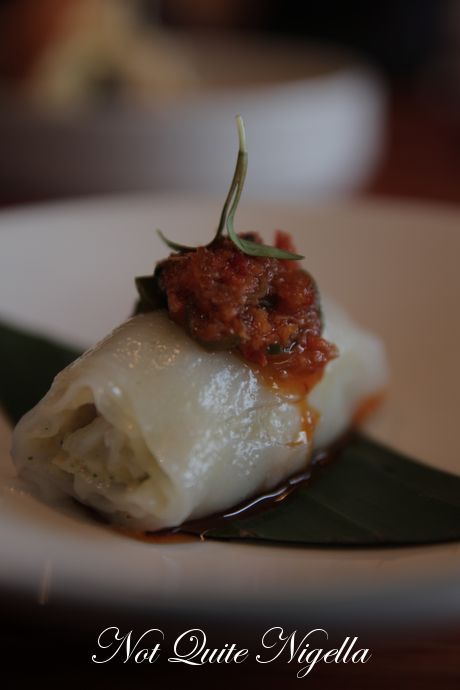 This is quality over quantity when this lovely little morsel hits our table. "It's served on an ash tray" Mr NQN says and I laugh. Didn't Bill Cosby smoke cigars? In any case this is a fresh steamed rice noodle wrapped around some delectable crab meat, ginger and corn and topped with what has to be one of my favourite sauces, the swooningly good XO chilli sauce. 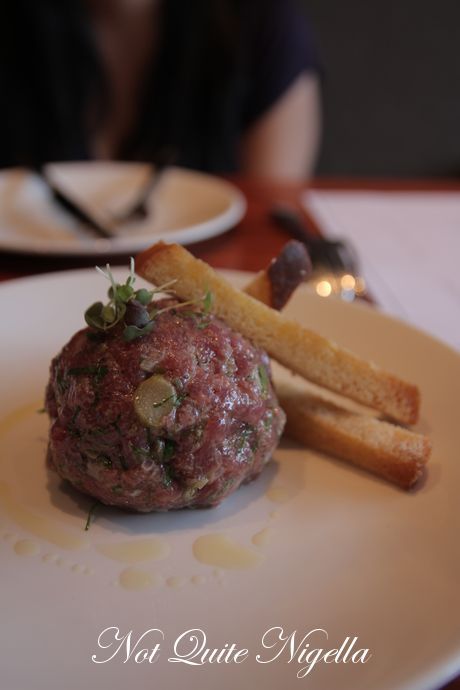 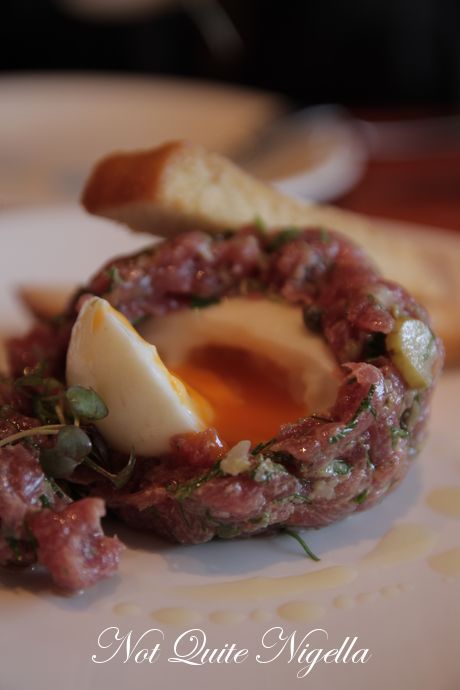 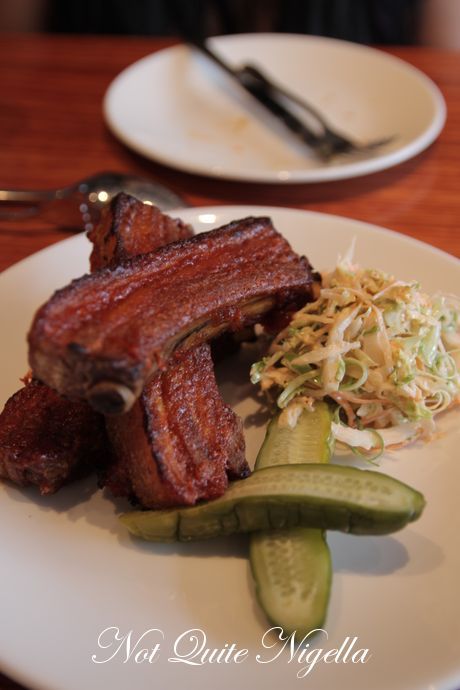 Now we come to the mains. The Korean bbq pork ribs come slightly blistered on the outside and piping hot. The aroma of chilli wafts straight up our noses and we are excited as we both love spice. The ribs come with a lovely jellied top and are soft and easily fall off the bone. They come three ribs to a serve and our waitress asks if we wanted to upsize to four ribs and therefore two ribs per person. We decide against it and once I've finished my one (I gave two to Mr NQN), I regretted it. Thankfully he can't be bothered with bones and I steal his bone to gnaw on. The spicy slaw is the perfect foil to the spicy, fatty meat as is the pickled cucumber. 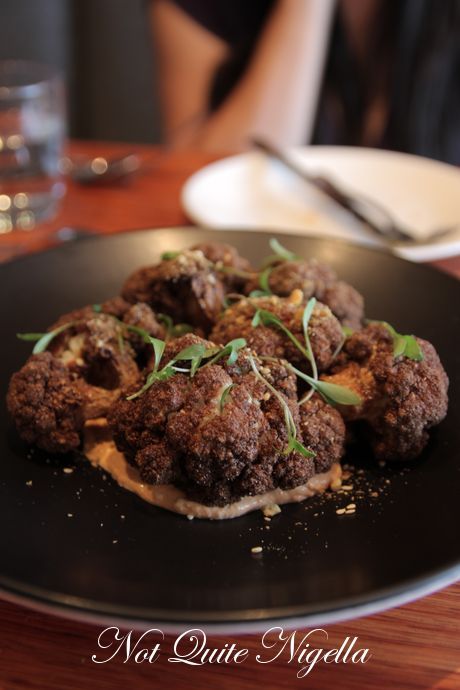 Our cauliflower comes out last along with the ribs and is a whole Lebanese cauliflower dusted with dukkah and sitting on a bed of spicy harissa yoghurt. The cauliflower is soft and the blanket of dukkah gives it a punch of flavour and the yogurt a creaminess without letting it ever get too dry. And I find myself wondering where dukkah coated cauliflower has been all my life... 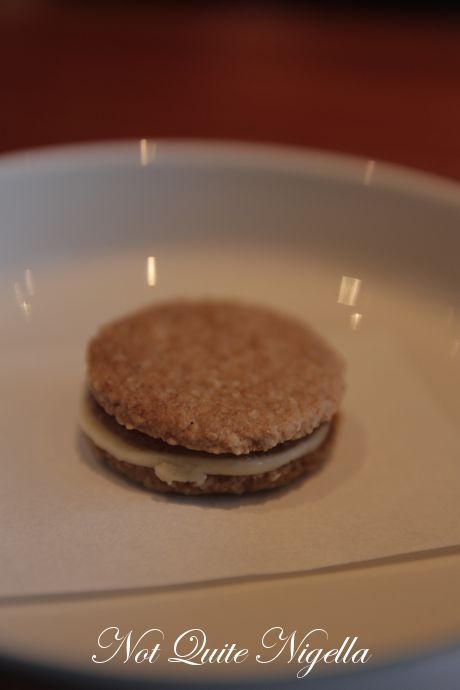 We're both burstingly full but I can't forget the last homage to American tv-the Oreo. Or more specifically the stilton and quince oreo. It is about the size of a 50 cent piece and features a thin, crisp oatcake biscuit, a round of stilton cheese and a round of quince paste. Just what I needed to end off our meal.

So tell me Dear Reader, what was your favourite sitcom growing up? I liked Family Ties, Cheers, The Golden Girls and Designing Women! 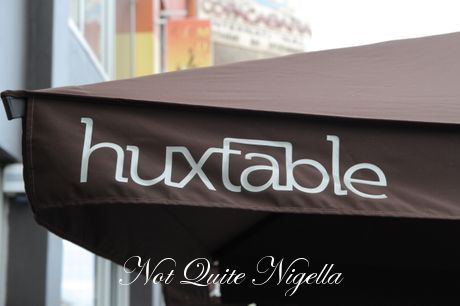 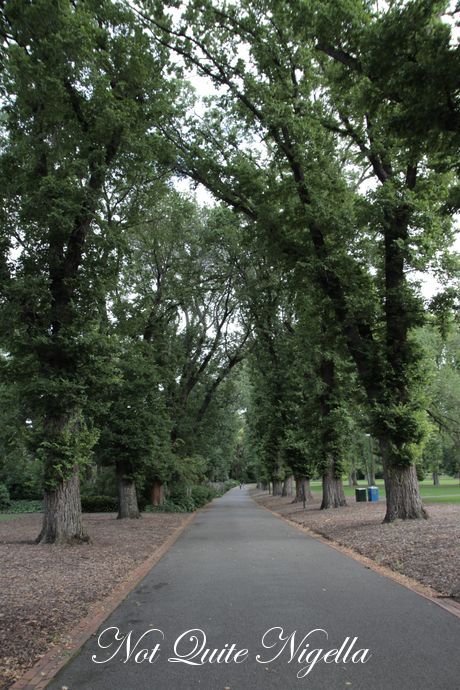