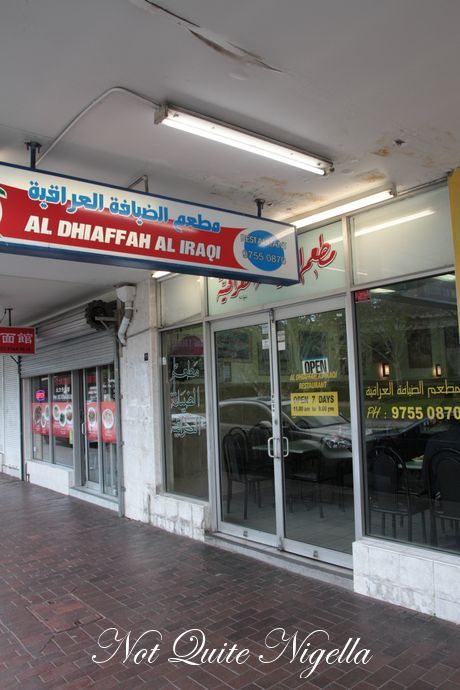 I was so excited I could hardly dial the phone. I'm usually an email person, if the phone rings I stare at it for a good few seconds before realising that it is an object that I need to pick up and speak to (how I became such a natural at it during my teenage years is a mystery). But this question wasn't one that I was prepared to wait for an answer for. I wanted to hear the answer yes immediately so I picked up the phone. 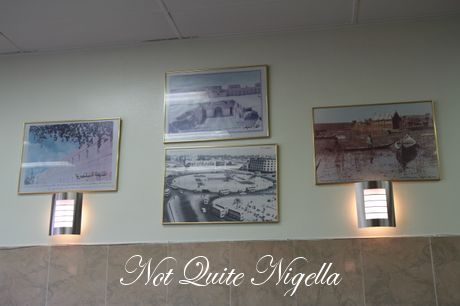 You see Dear Reader, I had found a restaurant that I was dying to try. It was in the new Cheap Eats book which I received a few weeks ago from the publisher. I was leafing through it in bed and one restaurant stood out to me: Al Dhiaffah Al Iraqi. Said to be the sole Iraqi restaurant in Sydney I knew my adventure loving friends Queen Viv and Miss America would also be intrigued to go on a trip out to Fairfield to give this little known cuisine a try. They answered a quick yes and I tempted Mr NQN with the knowledge that this would be a hearty meal for less than $20 a person and so a couple of days later we found ourselves driving towards Fairfield having picked up Miss America and Queen Viv on the way. 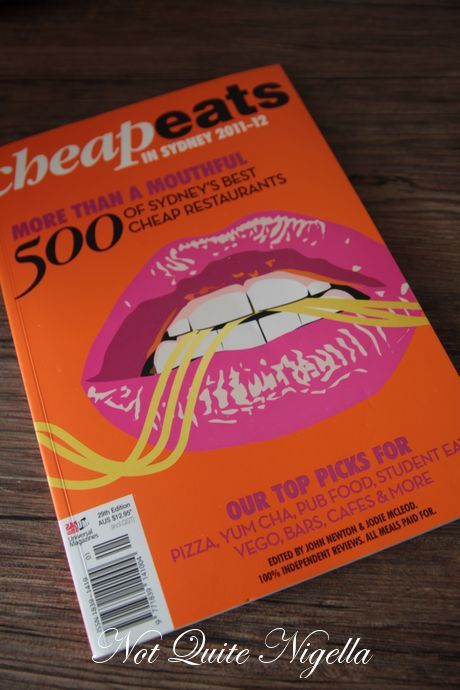 "Are we there yet? Surely we are!" Miss America said. He was hungry and admittedly so was I. It was 2:15pm on a Sunday afternoon and I had deliberately eaten a light breakfast. It was a hot day and we were hungry and thirsty. 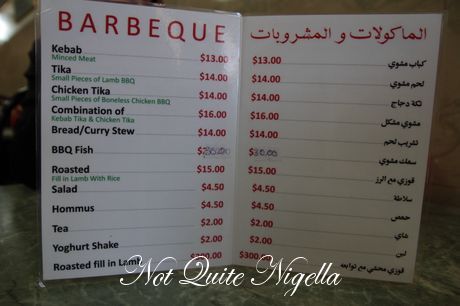 "Ooh is that where we are going?" Queen Viv asked peering at the palm trees and the signage for Al Dhiaffah Al Iraqi. Inside about half of the tables are full and the staff are friendly and welcoming. We take a table for four and are given menus. It's a short and sweet menu with twelve items including a yogurt drink and a tea and we take recommendations from our friendly waiter who tells us the most popular dishes. 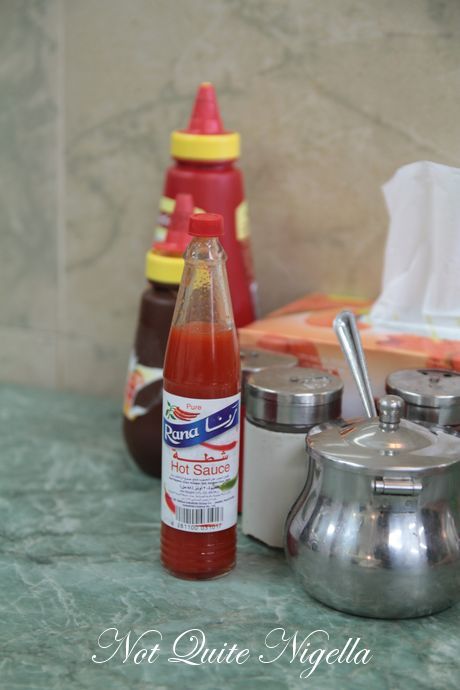 And it's true platter after colourful platter of two dishes in particular whizz past us while gigantic rounds of risen puffed bread and laid out on tables, one per person which is more than enough. A young girl dining with her family spoons rice into her mouth studiously trying not to spill a grain. We order three yogurt drinks before spotting the drinks fridge-a treasure trove of Iraqi soft drinks and pops. I go up and pick a couple of drinks including one called Pampa which the waiter who opens the bottle for me says is his favourite. The other drink I bought purely for the packaging, a Fez wearing gentleman for Abu Abed energy drink. 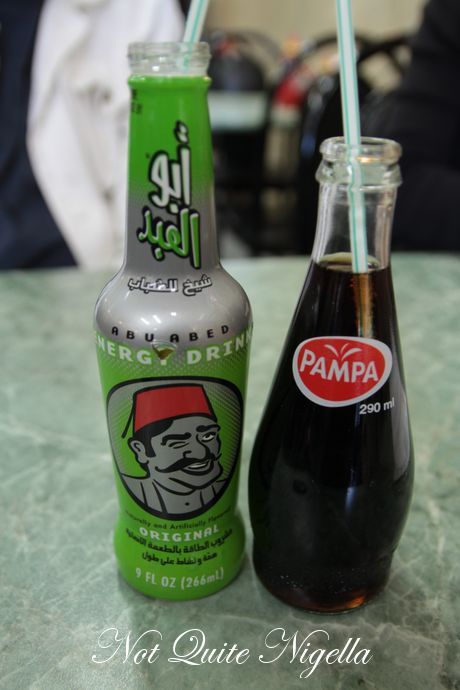 The Pampa is sweet and fizzy and refreshing with a quality somewhere between Coke and sarsaparilla with a slight fruitiness to it. The energy drink reminds me instantly of those sugary sweet medicines from childhood-nothing really natural and Mr NQN points out that it tastes in the same genre as Red Bull, a drink I only drank once several years ago and couldn't sleep for 3 days so I've never touched a sip since. 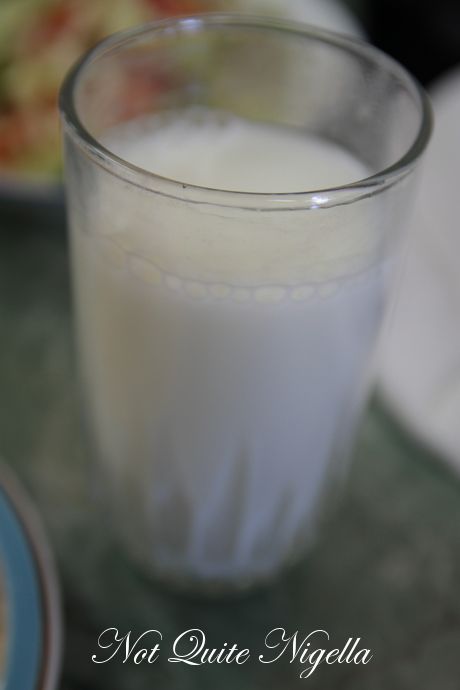 The yogurt drink is similar to the Turkish ayran although less foamy. It has more of a home made yogurt taste or a goat's yogurt taste and is salty and slightly thicker than ayran. 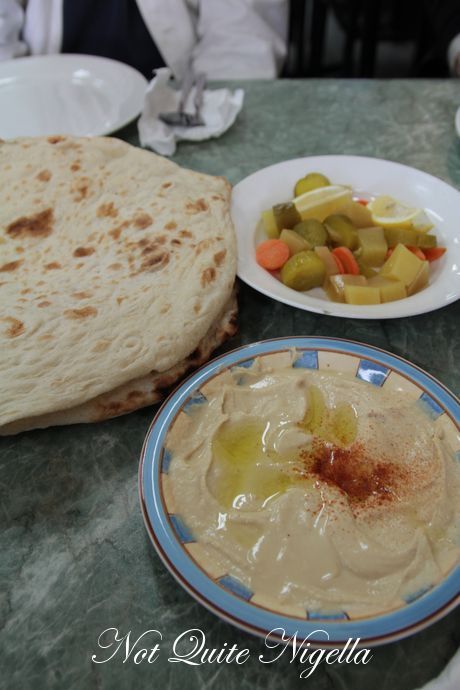 We're not kept waiting long for the food. In fact it arrives in a succession of platters taking up every spare inch on the table. And this is only ordering two mains! The bread arrives first and it is fluffy, fresh and slightly warm reminiscent of a cross between Turkish bread, naan and the thinner Afghan bread (although without the seasoning that can come on Afghan bread). It's tailor made for filling with hummus and the meat and salad. 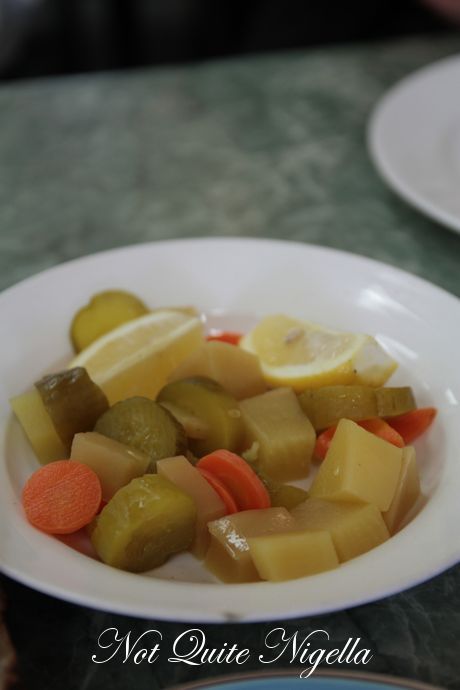 The sour tangy and strong pickles are a favourite of Queen Viv's who picks a piece up and deposits it into her waiting mouth with much relish. 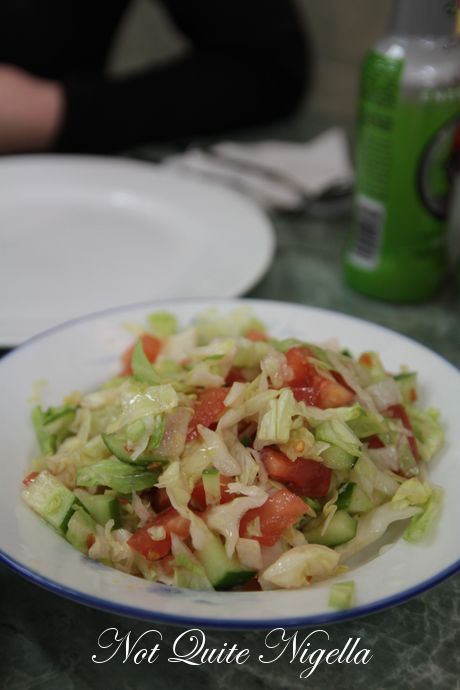 The salad is a chopped salad of ice berg lettuce, tomato and cucumber with a very light dressing. It's not the kind of thing I would go for on its own but like the hummus below it all fits with the bread and the kebab meats. 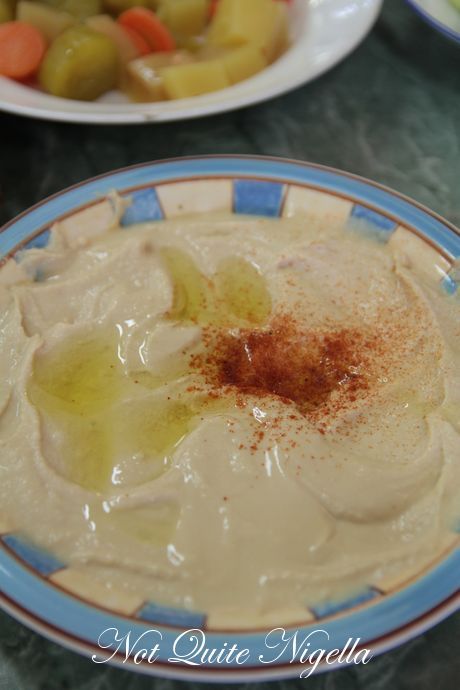 The hummus is strong in tahini which is not a favourite flavour of mine. Still it's a nice counterpoint when filling the bread with the meats and salads. 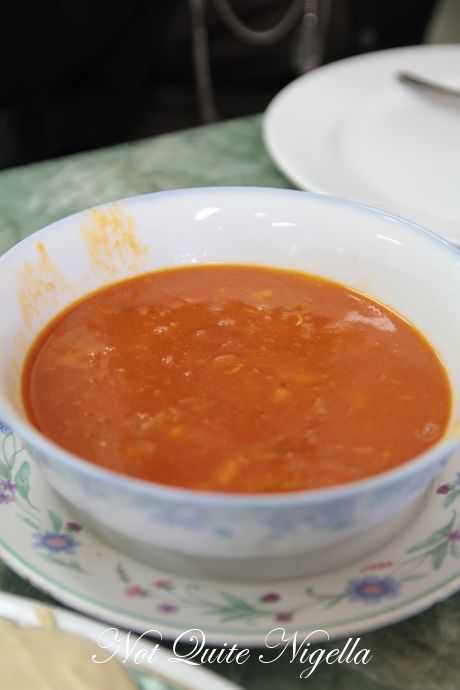 We're not sure which dish this came with but it is filled with cannellini beans and is like home made baked beans in a tomato sauce. The serve is generous and the bowl deep and the soup gives our palate variety in textures. 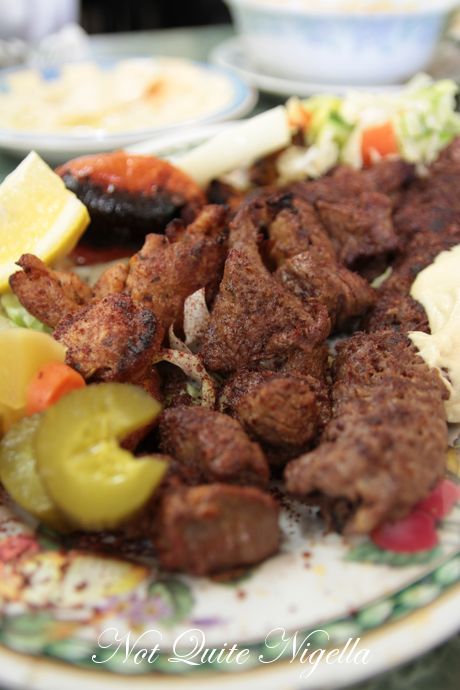 This dish features three barbecue meats: a kebab mince, a chicken and a lamb barbecued stick paired with salad and hummus. They're all excellent and singing with flavour from the sumac and the favourites are the lamb followed by the chicken and then the mince. We take some of the hot sauce that sits on the table along with the box of tissues (paper napkins are provided though) and we shake a little onto the hummus, salad and meat laden bread and try it. The hot sauce is in the same vein as Tabasco in flavour but is quite mild in heat. 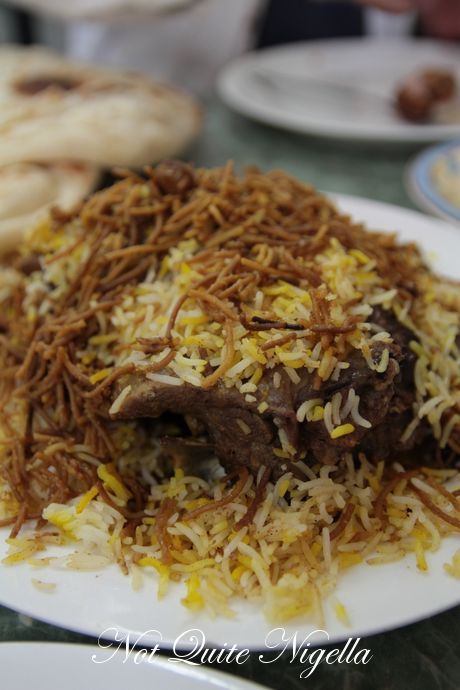 Roasted Fill in Lamb with rice $15

The roasted lamb shank is a meaty shank cooked long and slow with the meat falling off the bone. The lamb itself is very mild in flavour especially compared to the zingy, smokey barbecued meat but I do adore the rice which is similar to Persian rice topped with sliced cooked noodles on top. 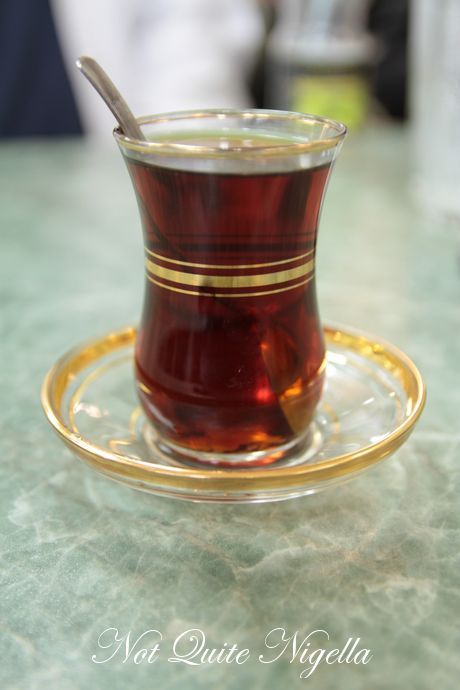 There's no dessert but there is a tea that you can sweeten with the sugar on the table. It's served in a gold band glass and plate and Queen Viv enjoys this. 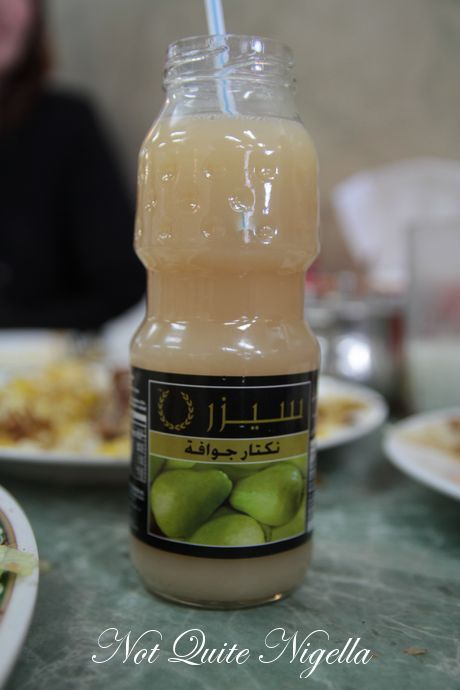 Miss America heads back to the fridge in search for some cooling refreshments and comes back with what he thinks is a pear juice but is in fact a guava nectar. I try a little and it's heavenly. I'm not a huge drinker of guava juice, it's perfectly fine but I don't often choose it but this is another type of species altogether and I think of being on a beach on holiday sipping a tropical drink with fruit made sweet from being kissed by the sun.

We watch as other feasting families unable to finish their meals take away the food in foil wrapped plates. I may not be on a beach but we all loved visiting a little slice of Baghdad.

So tell me Dear Reader, have you ever tried Iraqi cuisine?