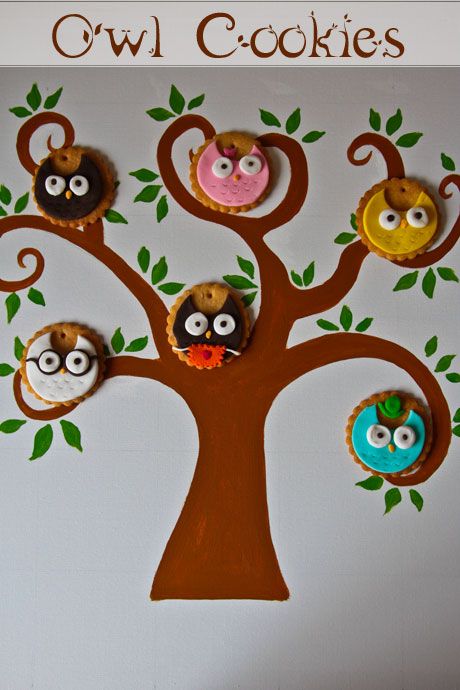 I'm not a particularly jealous wife. Well correction, I used to be a terribly jealous girlfriend but that was because before Mr NQN I used to date a guy that thought he was god's gift to women. And flirted with them just enough to make my blood boil and send me off into a jealousy infused tizzy (and I later found out that he actually dated one which rendered his pleas for me not to be so "paranoid" invalid).

But not Mr NQN, he has that wonderful Finnish reserve where he just doesn't flirt with other women. However, a friend of mine from years ago liked to flirt with him incessantly... 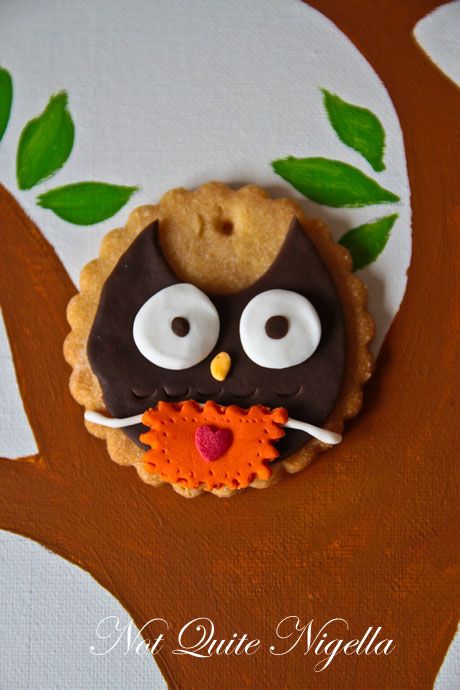 I was baking and that question seemed to come out of nowhere. I steeled myself for a diplomatic answer, thought better of it and replied

"The last time she almost showed you her boobs and she stroked your leg. So she's dead to me. Now, have an owl cookie!!" I said.

"Oh cool! These owls are cute" he said picking up the cookie. And with that, I breathed deeply, the conversation about the booby, leg stroking friend now forgotten. 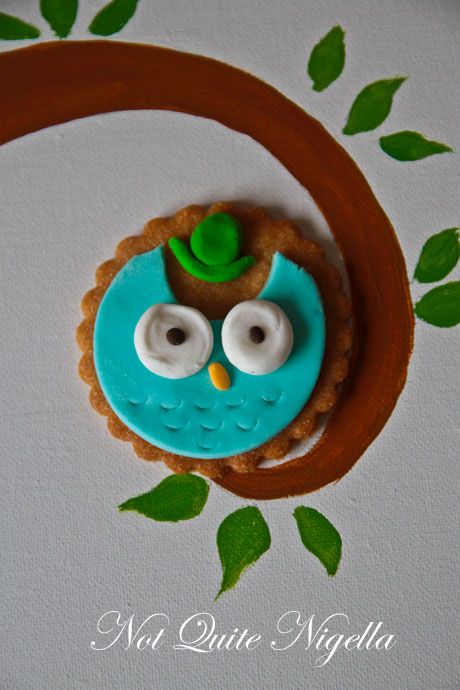 I do love making a sugar cookie and whilst my adventures with fondant don't always work out perfectly (I may have failed play doh as a subject at preschool) these are really amongst the easiest sugar cookies you can do. It just requires two round cutters and a bit of rolling action for the fondant. Plus it has the added bonus of distracting one from possibly unpleasant or unwanted conversations!

So tell me Dear Reader, are you a jealous spouse? And are you more tolerant than I of flirtatious friends? 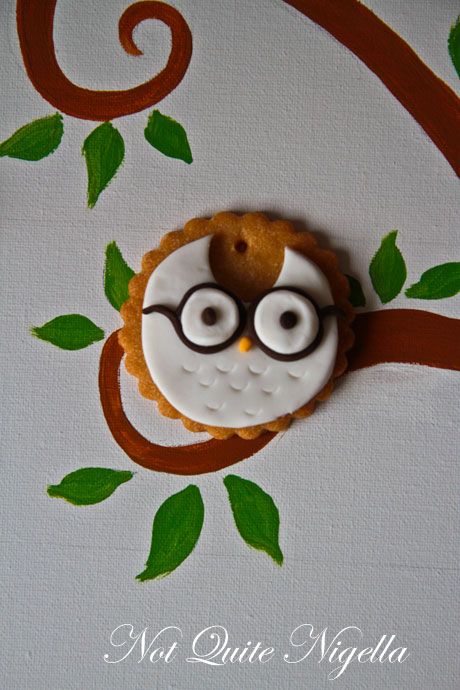 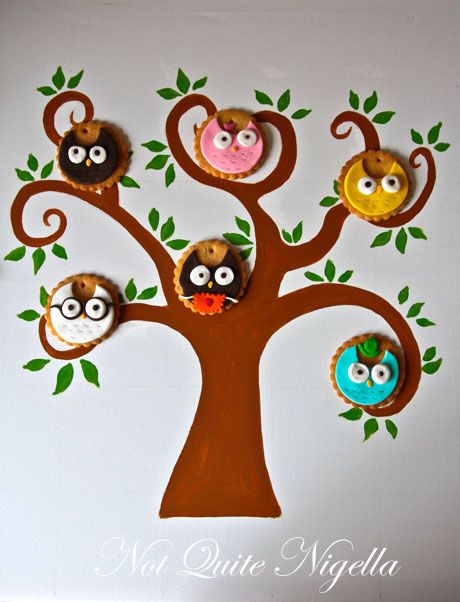 Step 1 - Make cookies. In a large bowl, cream together butter and sugar until smooth. Beat in egg and vanilla. Stir in the flour and cinnamon. Cover, and chill dough for at least one hour (or overnight but take it out ahead of time to let it become more rollable). 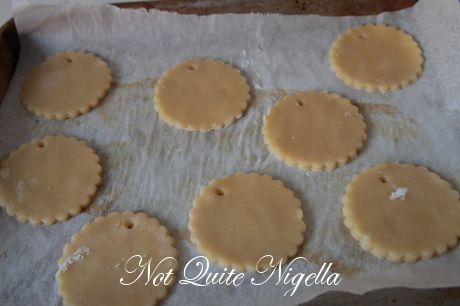 Step 2 - Preheat oven to 400 degrees F (200 degrees C). Roll out dough on floured surface 1/4 to 1/2 inch thick. Using the large round cutter, cut into rounds and if you intend to hang these up poke a hole with a chopstick. Place cookies 1 inch apart on parchment paper.  Bake for 5 to 8 minutes in preheated oven. Cool completely. 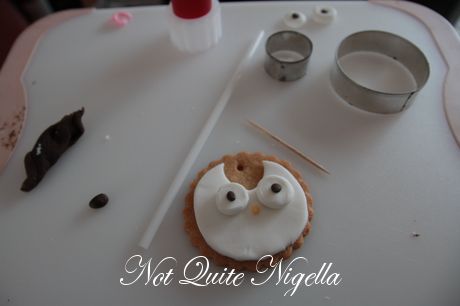 Step 3 - On a non stick surface or a surface lightly dusted with cornflour roll out the colours that you want to make the body of the owls in. Cut out a circle using the large round cutter and then using the small cutter cut out a semi circle to make the owl shape. With a little water on a paintbrush, adhere the fondant to the cookies. 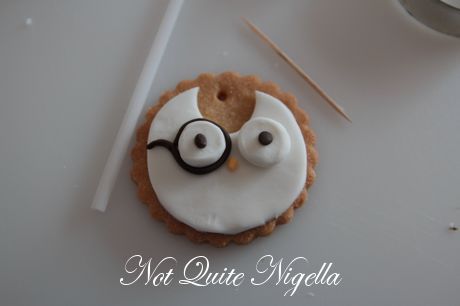 Step 4 - With clean hands (fondant colour seems to transfer easily) make the eyes. Separate equal sizes of fondant and then roll into a ball and flatten. I find this easiest to do as an assembly line-make all of the whites and then pinch tiny amount of brown fondant to make the pupil of the eye. Stick this on with a tiny bit of water or if the fondant is fresh and pliable it may stick on by itself. Stick the eyes onto the owl. Shape small beaks by rolling a tiny bit of yellow fondant into an oval shape with pointy ends and adhere this to the owl too with a little water. 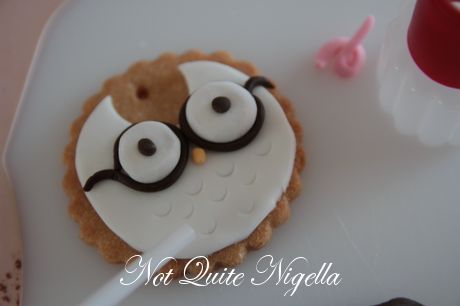 Step 5 - You can also make little features for the owls-I added glasses to one using a thin rolled sausage of brown fondant looped around the eyes. You can also shape a hat using a small paring knife or an apron using a ravioli cutter and a toothpick to poke little details on it. A final touch is with a straw tilted at an angle make half moon marks to make the feathers on the bottom half of the owl's body. 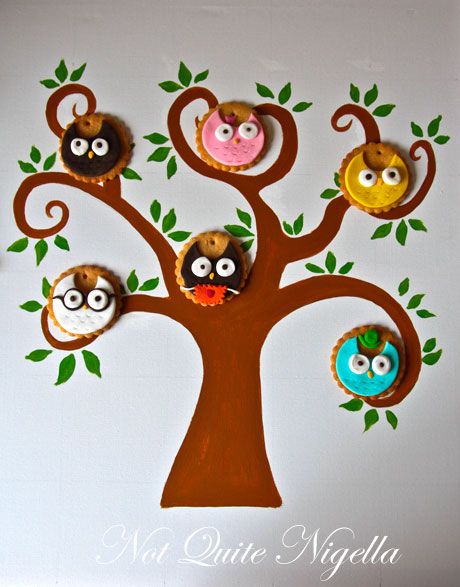