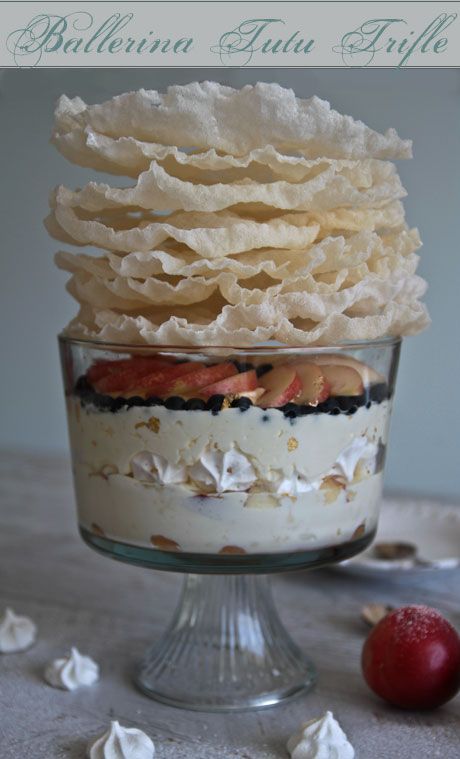 Someone asked me the other day how my new year's resolutions were going now that we were hurtling at warp speed towards the middle of the year. Stumped to think of a single one that I had made, I told them that I had not made any serious ones. "None at all???" they exclaimed in disbelief.

She gave me a look - a bit pitying I might add, and sighed.

Obviously I don't have serious resolutions as I think that anything serious should really be dealt with all year round and not just at the onset of a new year although one small one that I sort of made last year was to use a trifle bowl that I had bought. I had tried out trifle recipes but they weren't quite right and they remained in the photographed but "not tasty enough" file. I decided to make one this year to bring to dinner at my parent's house. It had to have gold as that was lucky but not too much alcohol as my parents think that drinking alcohol makes you a satan worshipper ;). 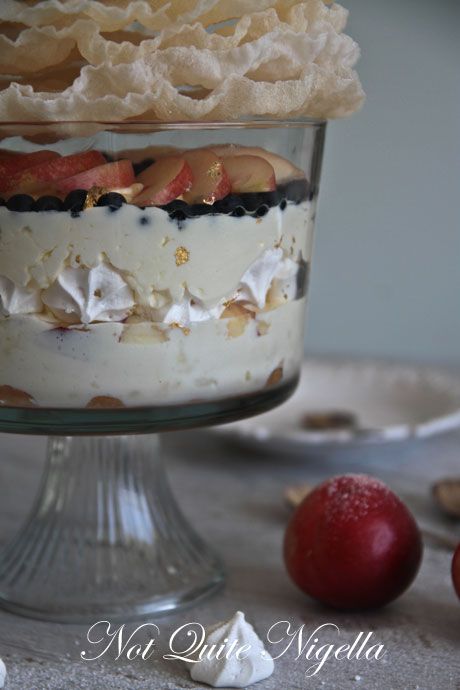 I tried to make it lower in fat-and I say lower and not low in fat as there is a lot of cream in there but there is also vanilla yogurt and low fat custard in there to balance it out. There were also meringues as well as sponge fingers and I used some fruit of the season like white nectarines and blueberries. I topped it off with some deep fried Vietnamese rice paper for a tutu effect that I had seen in Guy Mirabella's cookbook "Hungry" that I was sent.

The trifle was rich and moreish and many had seconds. The meringues provided a layer of sweetness and I had just one layer of sponge fingers at the bottom so that it was mostly voluptuous cream, custard and thick vanilla yogurt with some fruit and a sweet hit from the meringues. The tutu? Well that was more decorative but it was an eye catching dressing to the dessert.

So tell me Dear Reader, how are your New Year's Resolutions going? Do you ever stick to them? And do you ever feel bad if you buy something but don't use it? 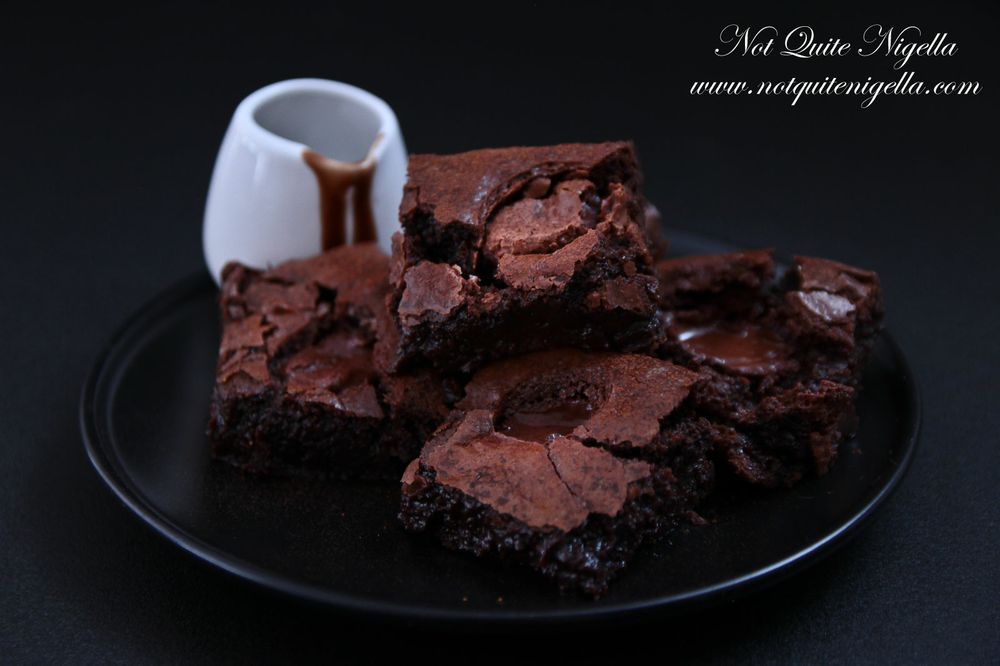 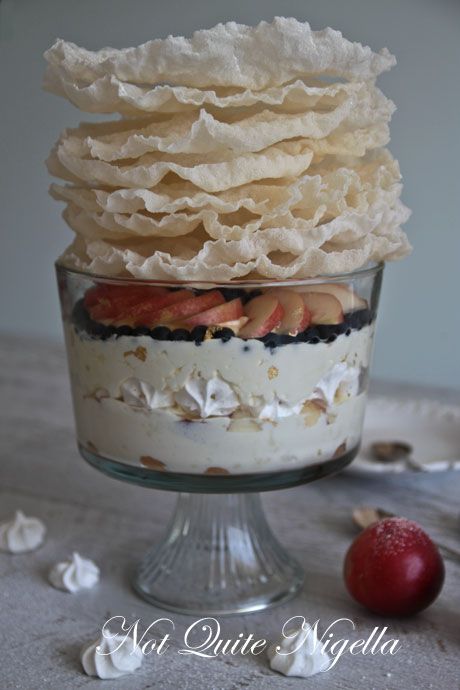 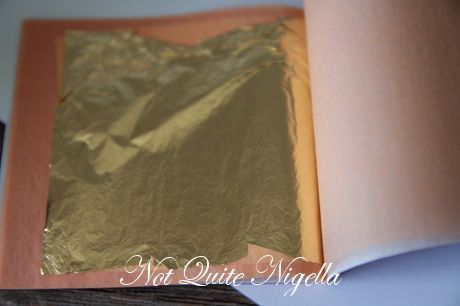 Buyer's tip: edible gold leaf can be found at specialist kitchenware stores as well as art shops (although the latter in larger quantities). 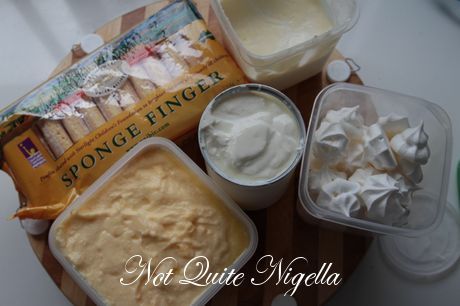 Step 1 - Firstly, measure how large your trifle bowl is-mine had a 12 cup capacity so ensure that you have roughly enough filling for the bowl. Line the bowl with the sponge finger biscuits and drizzle the limoncello over them. If you are using gold leaf, place it around the bowl now-it should stick to the glass just fine in very small pieces. 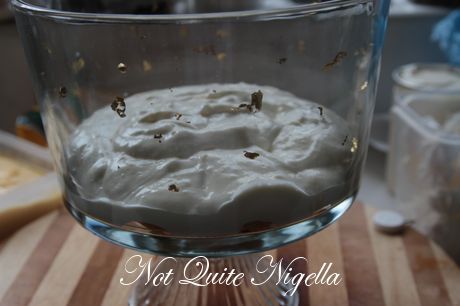 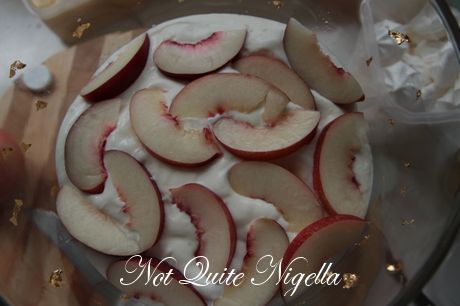 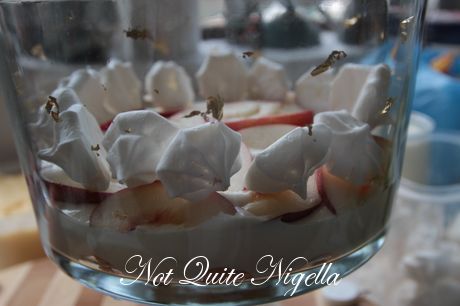 Step 2 - Then layer some vanilla yogurt and then slice up the nectarines into thin pieces and spread them over the yogurt. Top with meringues-stand them on their sides to create a layer (or you can lay them down flat, there are no real rules when it comes to trifles). Top with a layer of whipped cream and smooth this over and ensure that it is flat and that the cream goes to the edges for the blueberries. 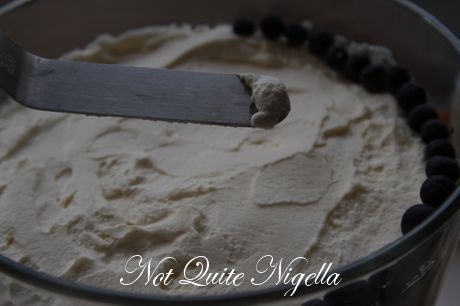 Step 3 - Add some blueberries around the edge and then fill the centre with vanilla custard. Top with more sliced white nectarines and blueberries. Place in the fridge to allow the sponge fingers to absorb the liqueur. 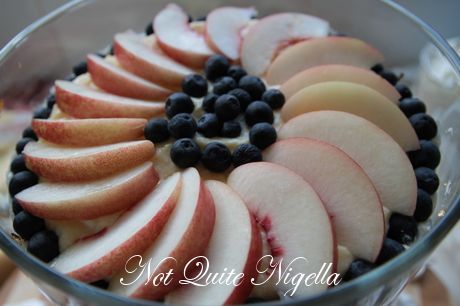 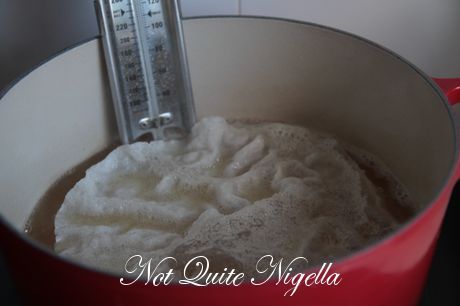 Step 4 - Meanwhile, deep fry the rice paper rounds. Heat up about an inch worth of oil into a large frying pan and heat to 180C/350F-they won't puff up until they reach that temperature (trust me, I slipped one in and it just went crispy and translucent). With tongs add each sheet of rice paper individually and they will crisp up within seconds. Place paper towels between each one and repeat until you have about 6-8 good, puffed up sheets. Some of them curl over so just have a few more ready just in case. Place on top of the trifle and you can also sprinkle icing sugar between each one and on top. They're more for decoration as they don't have a lot of taste. 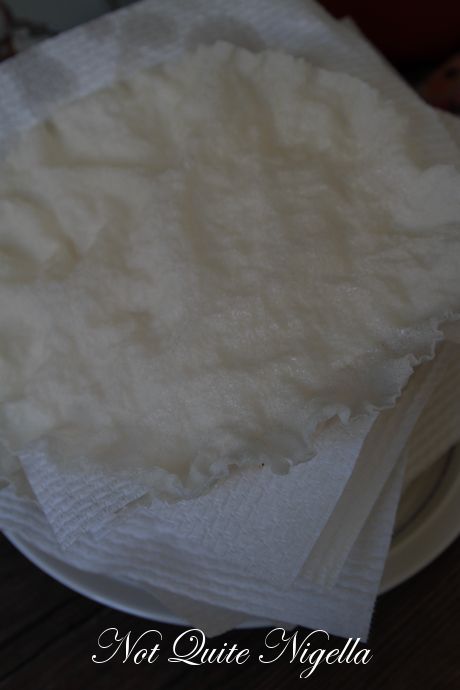 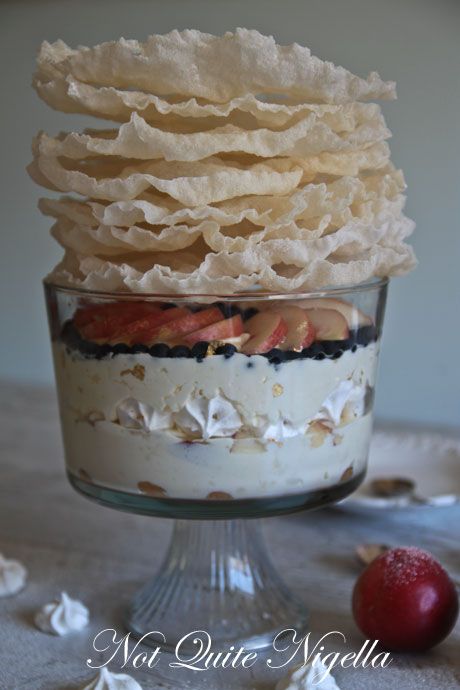