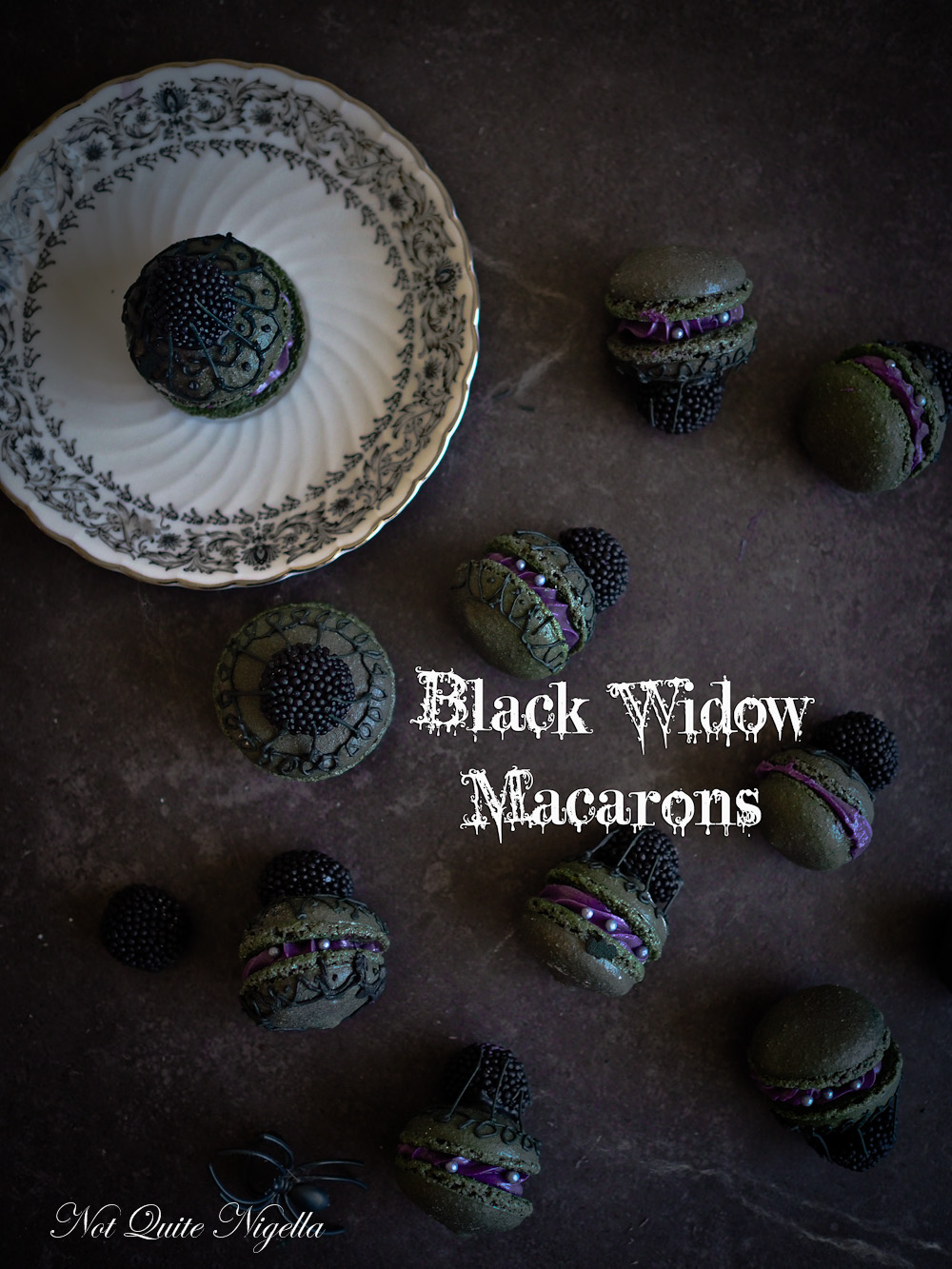 Looking for something a bit elegant this year for Halloween? These Black Widow Mantilla macarons are a mix of blackberry buttercream and black velvet shells. The royal icing decorations were inspired by Spanish mantilla veils. And take a closer look because these have little eyes that are watching you!

Last year I made a run at these and I failed miserably. My problem was that I tried halving this recipe but the macarons decided that that wouldn't do and they turned out with enormous cracks on the top. This year I gave them another run and thankfully they worked out but I always treat macarons with suspicion. Quite frankly I don't trust the temperamental little sods.

Speaking of treating things with suspicious, my cousin Rich one told me that he always thought that wherever you worked you should have a nemesis. Someone that got you out of bed in the morning and ready for battle. He actively sought nemeses out (he's an unusual guy) but I can't imagine anything worse. But recently I realised that I actually have a nemesis myself. It's Henry, the man that is the head of the strata committee in our building. It wasn't until the domestic violence case recently that I realised that everyone in the building can't stand him. 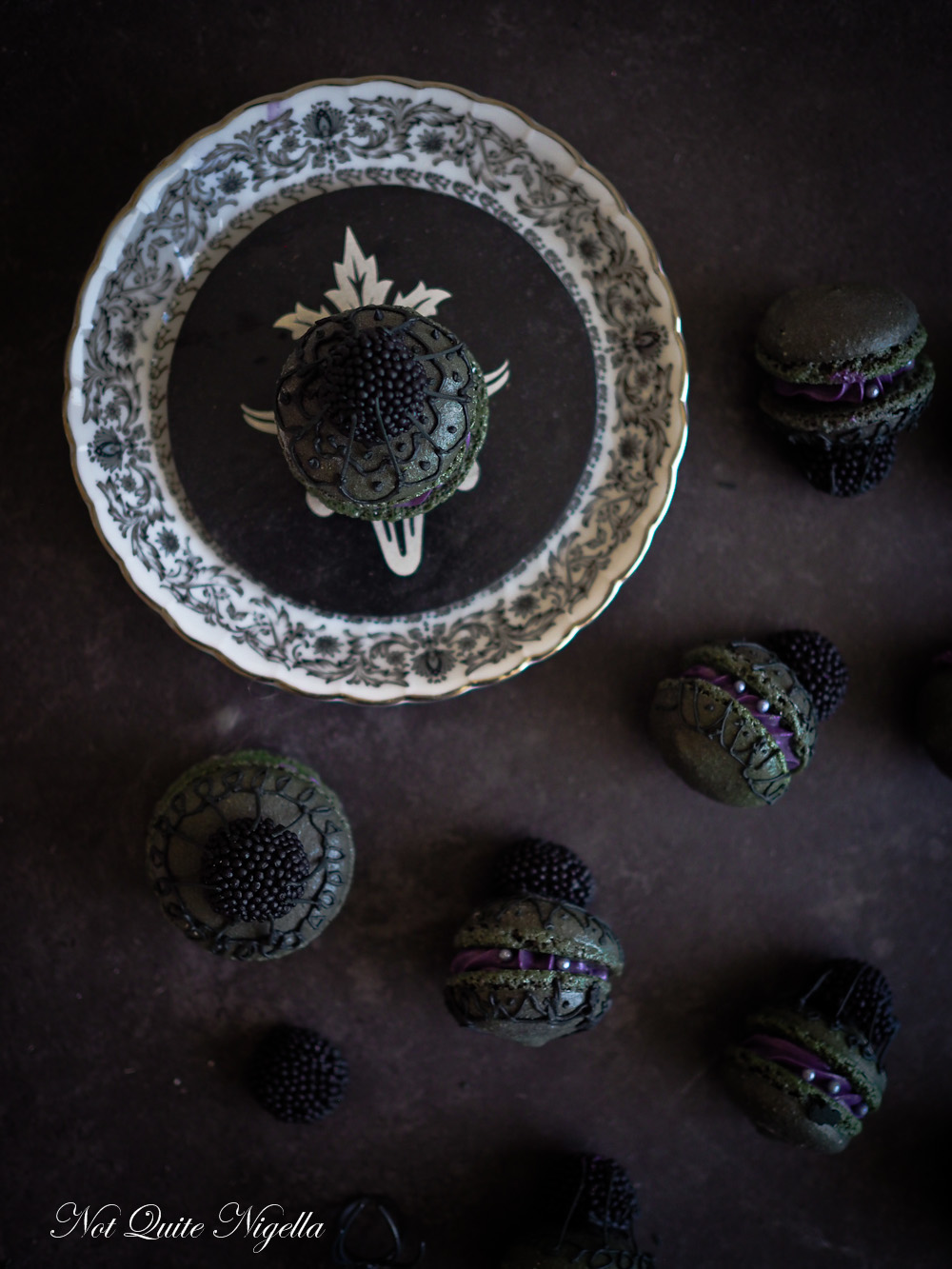 The other day I was nursing a batch of macarons. Not the most productive way to spend a day, making something you loathe making but hey Halloween. I was training with Nina that afternoon when I realised that the macarons were, in their own temperamental way ready to go in the oven at the same time that I would be seeing Nina. So I suggested that we make use of my communal backyard. "I'll bring the sausage monsters along," said Nina who was looking after two sausage dogs (who pee everywhere hence the sausage monster moniker).

Now Henry doesn't like dogs and he likes the idea of people in their apartment having dogs even less. Nina waited for me outside my block and Henry walked past. He gave her a greasy eyed stare and then came back around and craned his neck around and gave her a second look. She raised her phone and snapped a photo of him creeping and sent it to me. He collected his mail and then walked back to her. "Do you live here?" he asked her. Nina, quite aware of who he was by now gaily added, "Yes, I live in number 24!". 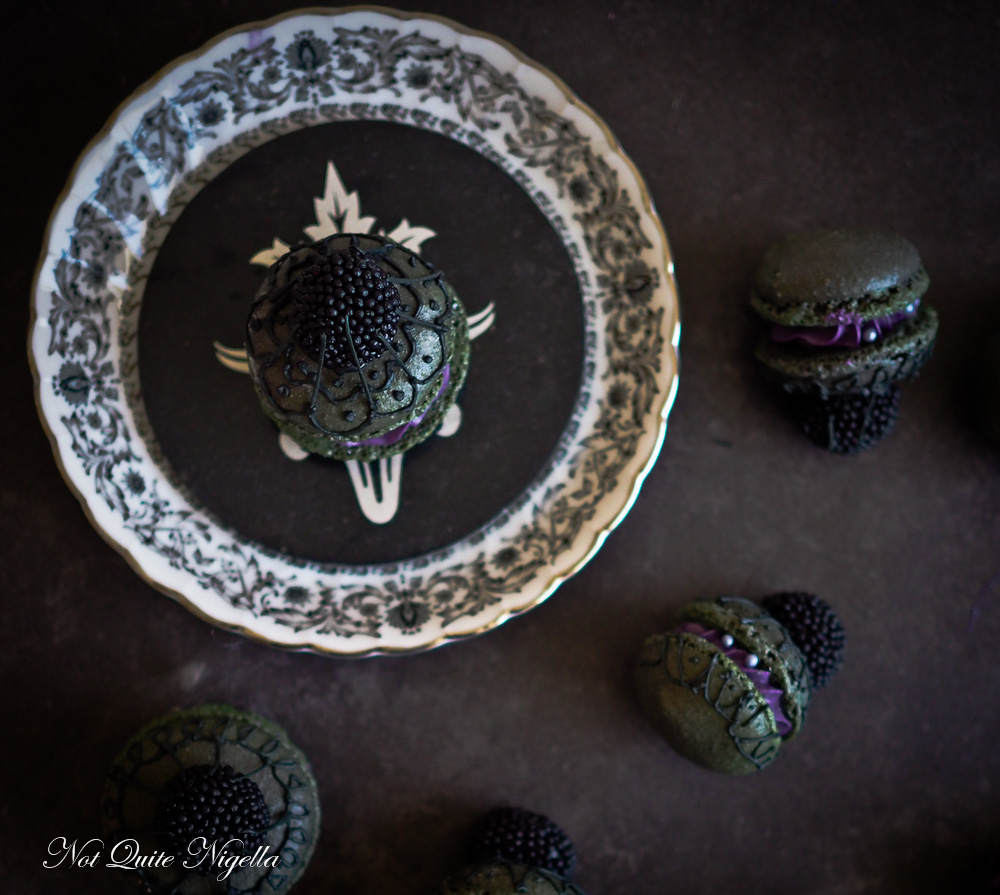 Oddly enough, it didn't quite twig to him that there is no number 24 in our block. Perhaps because he was distracted by the dogs. "I hope you're not going to take those dogs inside!" he then warned. "Because you're not allowed to, this building has a very strict by law that you can't take dogs in," to which Nina replied breezily and with a sweet smile, "But it's actually not illegal!" and then swanned off to a very confused Henry.

I had no idea about this whole interaction as I was sliding a tray of these macarons out of the oven but I couldn't stop giggling when she recounted it to me. Sometimes even your nemeses can make you laugh even when they don't mean to!

So tell me Dear Reader, do you agree that you need a nemesis at work to get you up in the morning? Do you have a nemesis in your life? And do you find macarons easy or tricky? 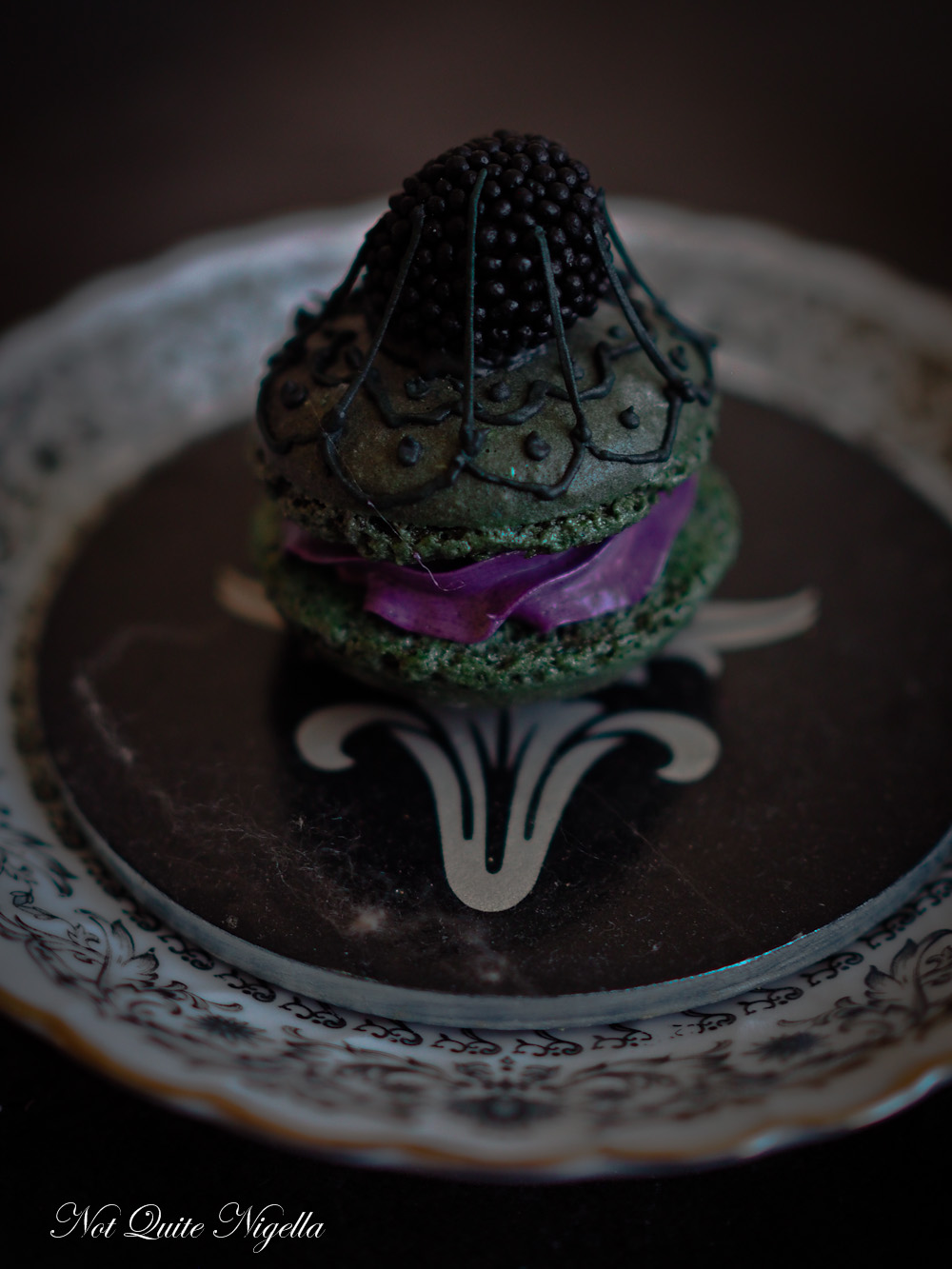 Royal Icing (this will make more than you need) 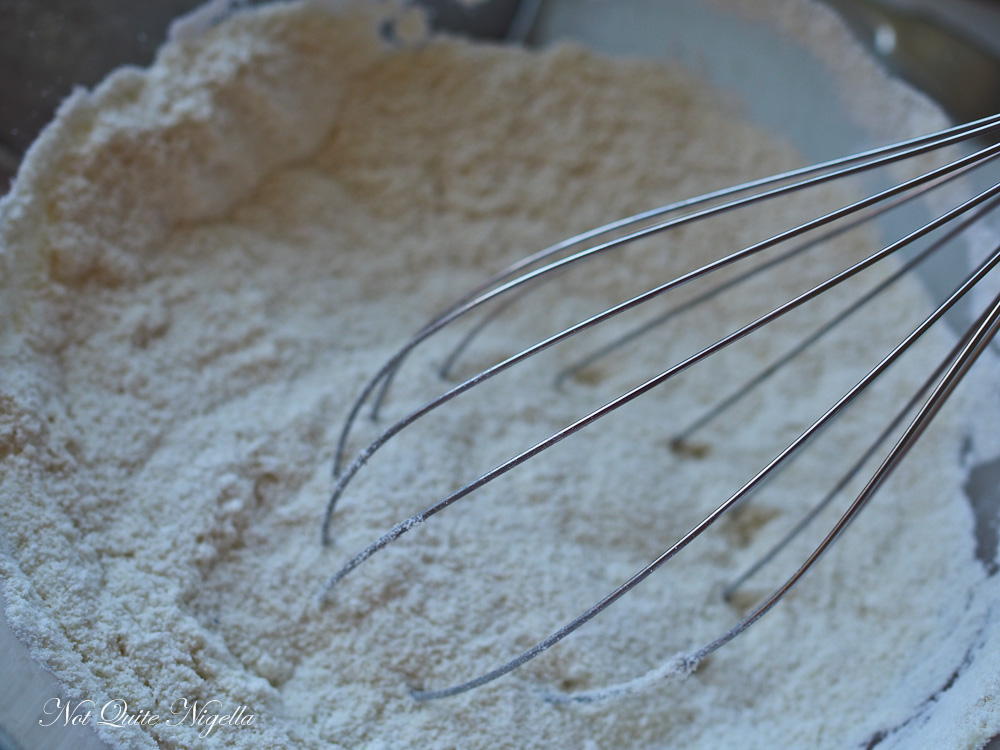 Step 1 - Sieve the tant pour tant well with a fine sieve. I hate this part, honestly. Sifting and transcribing are my two most hated tasks apart from talking to Henry (haha!). Mix lot 1 of the egg whites with the TPT and mix to a thick paste. 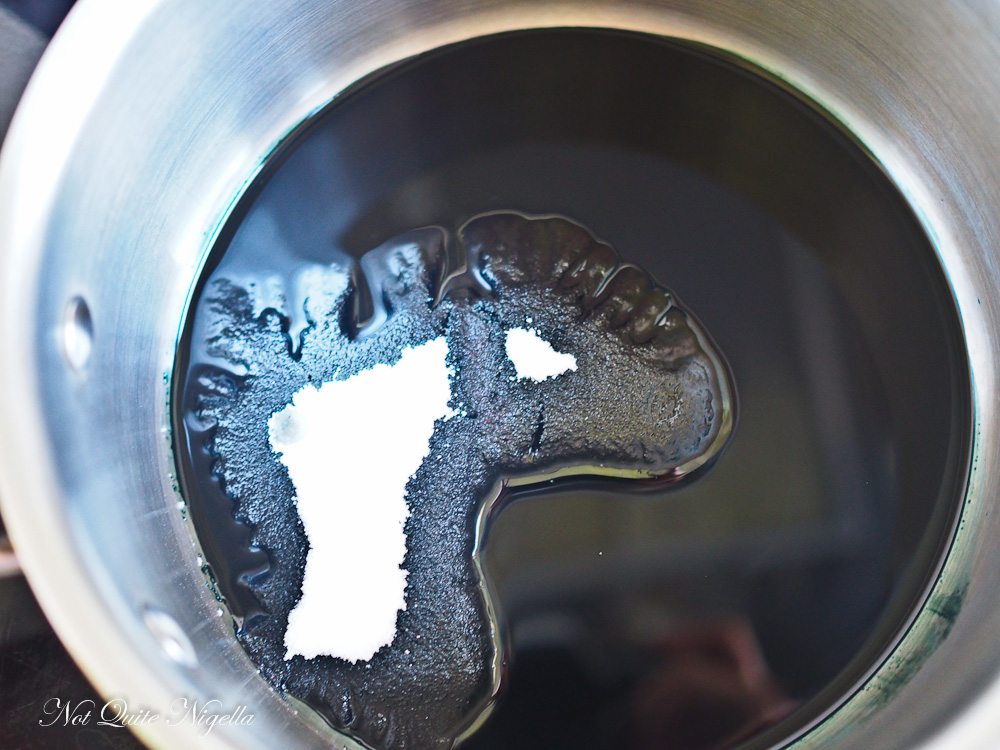 Step 2 - Place the caster sugar, water and black food colouring (go quite strong with this, about 1/2 teaspoon depending on what kind of colouring you use) in a heavy bottomed saucepan. Place lot 2 of the egg whites in a mixer fitted with a whisk attachment. Have a temperature gun ready. Heat the sugar and melt the sugar and then bring to a boil until it reaches 110C/230F. Start the whisking process for the egg whites and when the sugar syrup reaches 118C/244F then pour it into the fluffy egg whites and whisk for 1 minute on high. Then reduce speed to medium for 2 minutes or until the mixture reduces down to 50C/122F.

Step 3 - Line 3-4 baking trays with parchment or silpats (I find best results with silpats). Place the mixture in a piping bag fitted with a plain size 11 nozzle. Pipe desired sizes making sure to leave about an inch between each one. Allow to sit until a skin forms-this can take anything from 15 minutes to over an hour and it depends on the weather conditions. If you have air conditioning, you can switch it onto cool and this will help speed it up (very humid conditions are not ideal for making macarons). 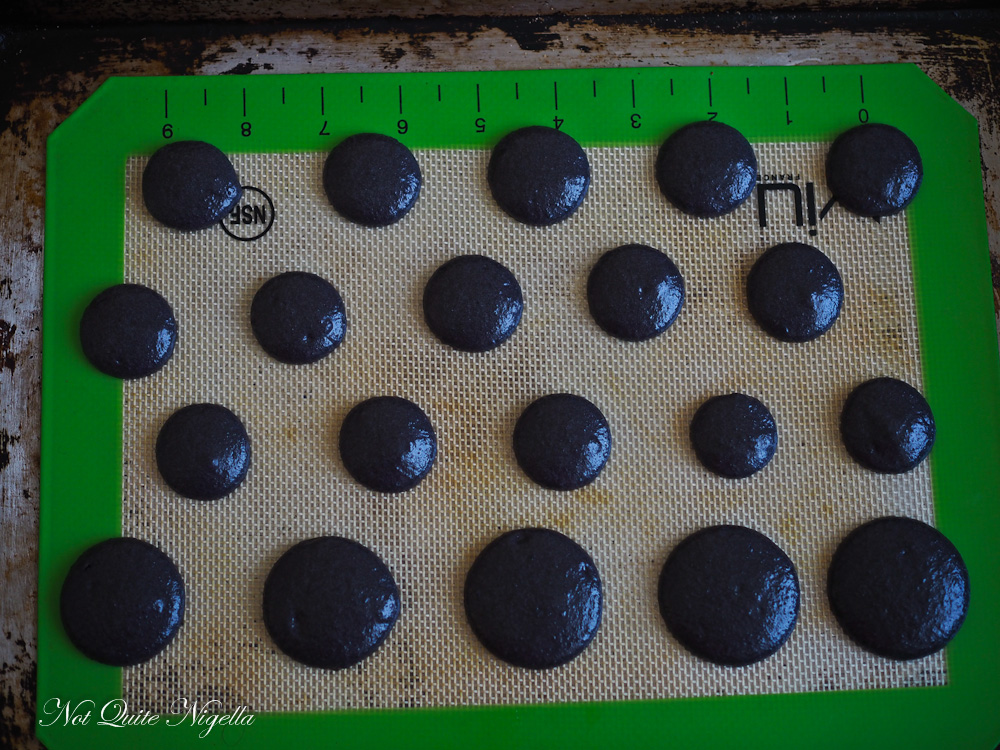 Step 4 - When you can touch the surface of the macarons and it doesn't stick they are ready to bake. Bake in a 150C/300F oven for 30 minutes. I bake one tray at a time as sometimes the bottom tray doesn't bake as well and doesn't form feet. Allow to cool for 10 minutes on the silpat and they will pull away perfectly. 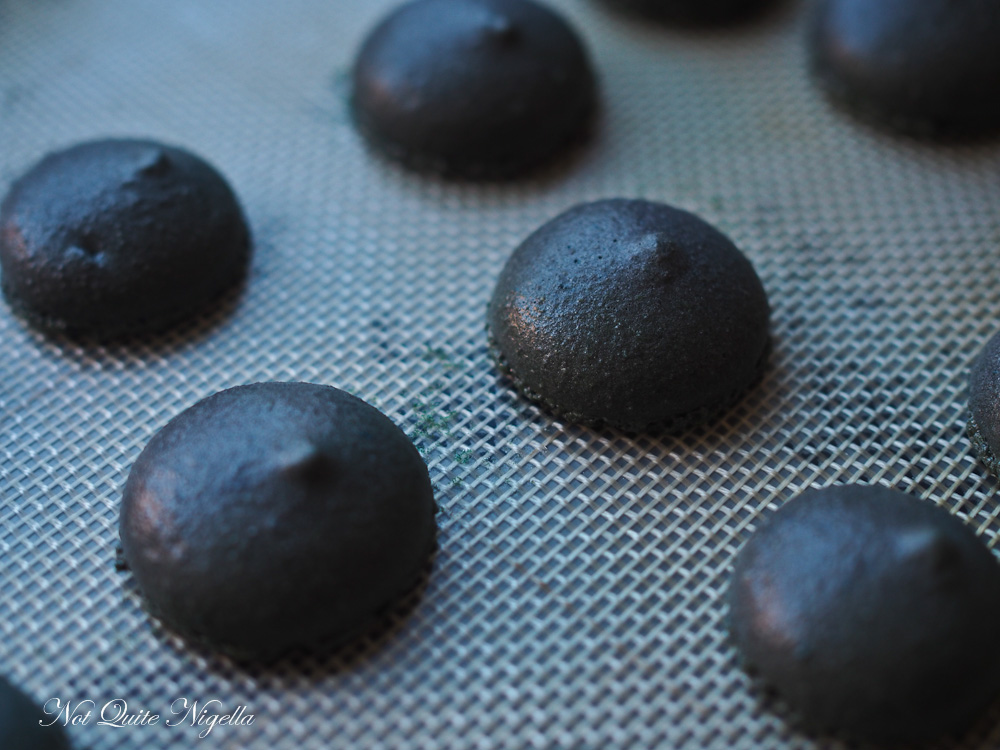 Step 5 - I never make the buttercream until the macarons are done (because I tried these last year and they totally flopped, tricky little buggers). On speed 3 (out of 10 so quite slow) using a beater attachment beat the butter for 5 minutes and then add the sugar and water in two lots and beat for an additional 8 minutes. Add colouring and blackberry flavouring and beat for another 2 minutes. 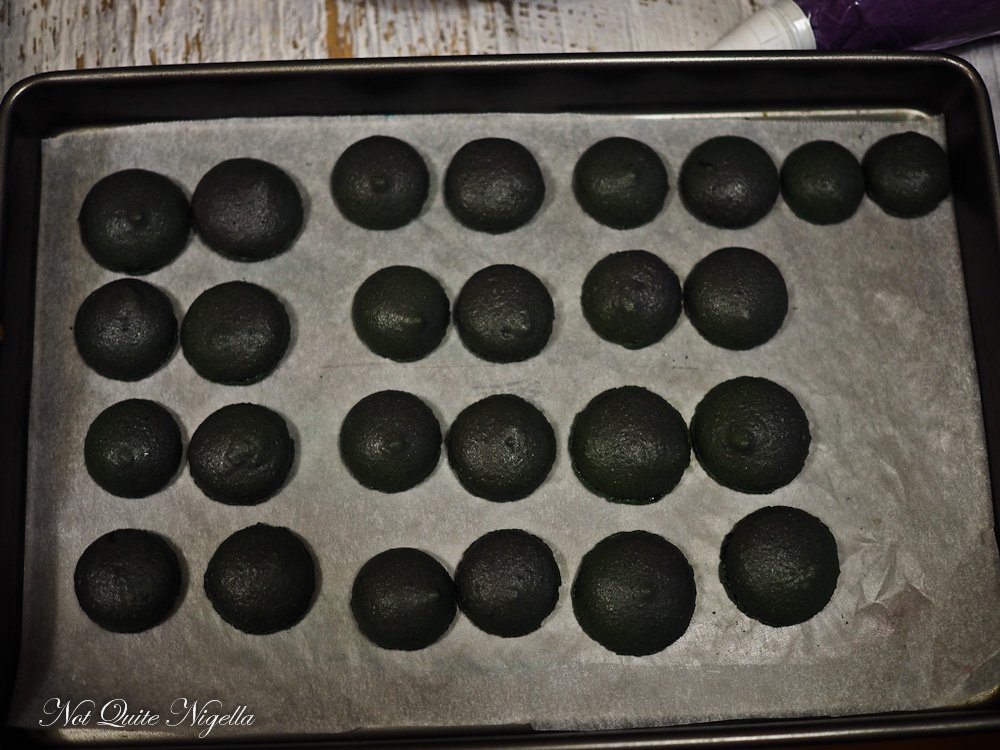 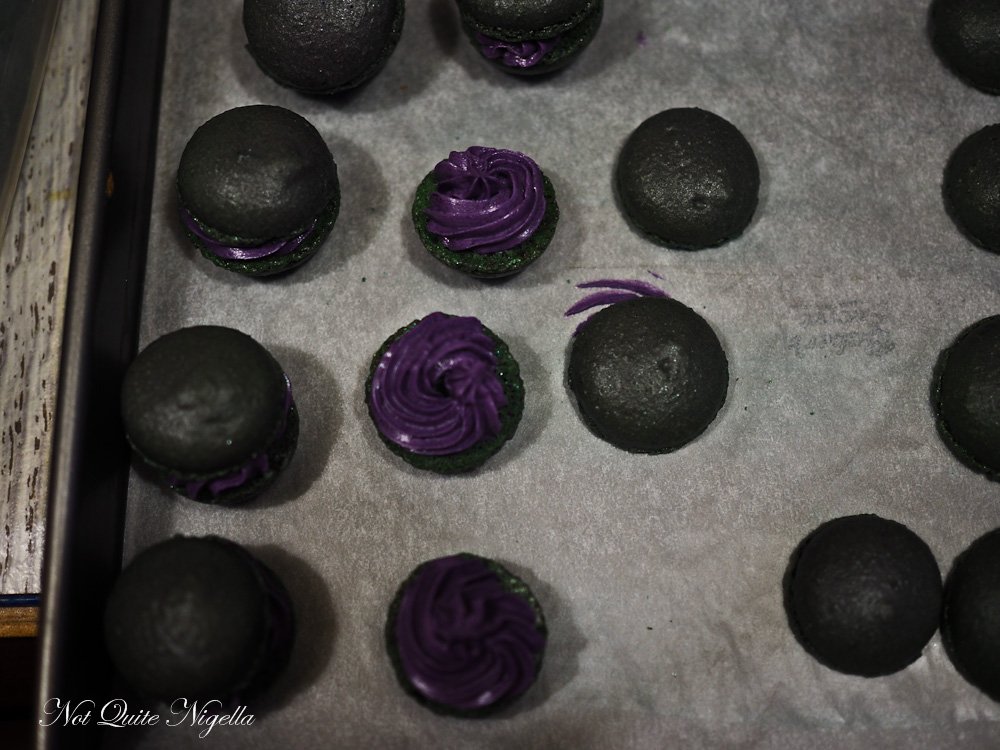 Step 7 - Make the royal icing. Add the icing sugar to a food processor and process until all lumps are gone. Add the egg white and test the consistency. You want it to be able to hold a fine line-sift more icing sugar into the mix if it isn't stiff enough or add a drop of water if it is too stiff. 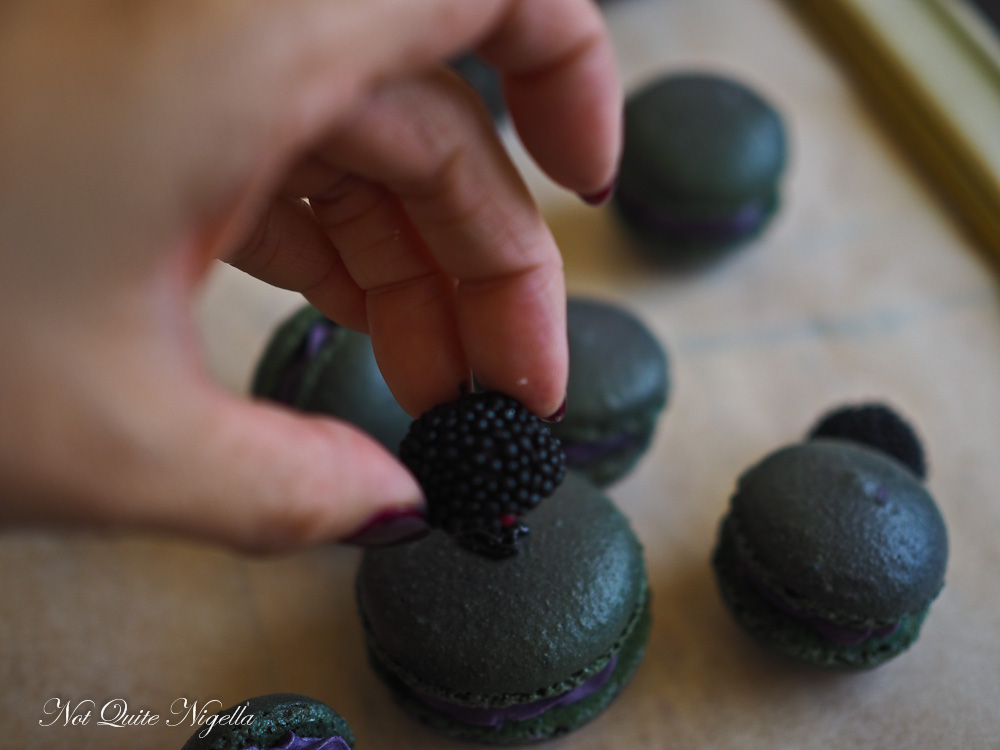 Step 8 - Place into a small piping bag (I make one out of parchment) and attach one blackberry gum on top of each macaron pair. Pipe patterns onto the macarons and then drop a couple of pearl cachous for eyes. Allow to set completely. Store in the fridge until needed. These are delicate but also freeze well but are best frozen without the royal icing detail and the gummy. 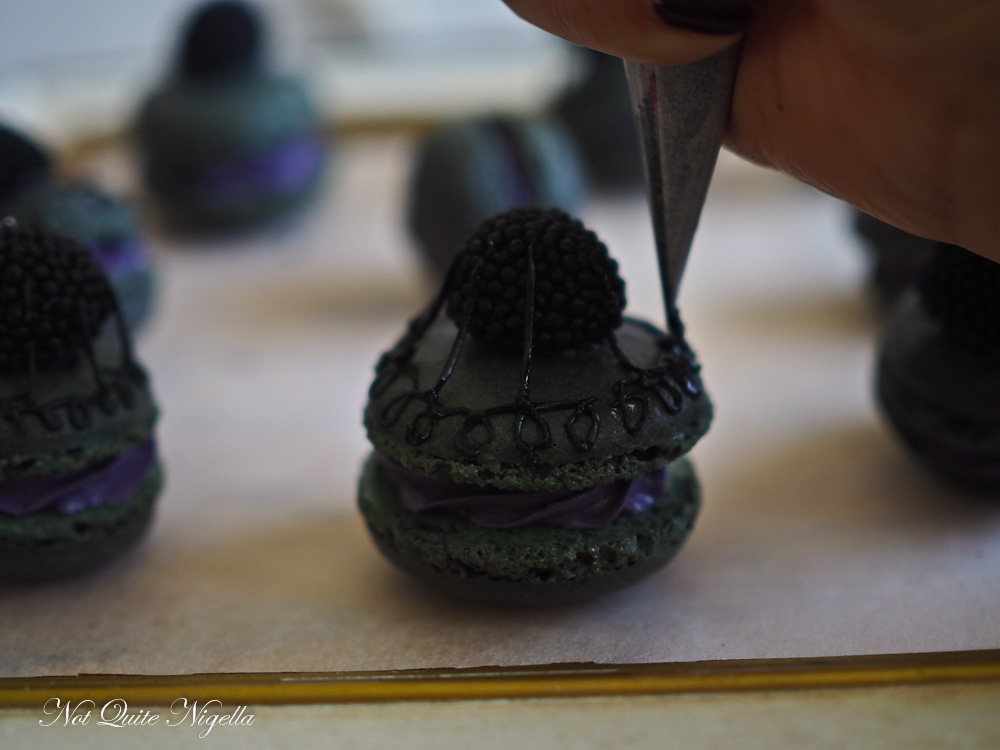