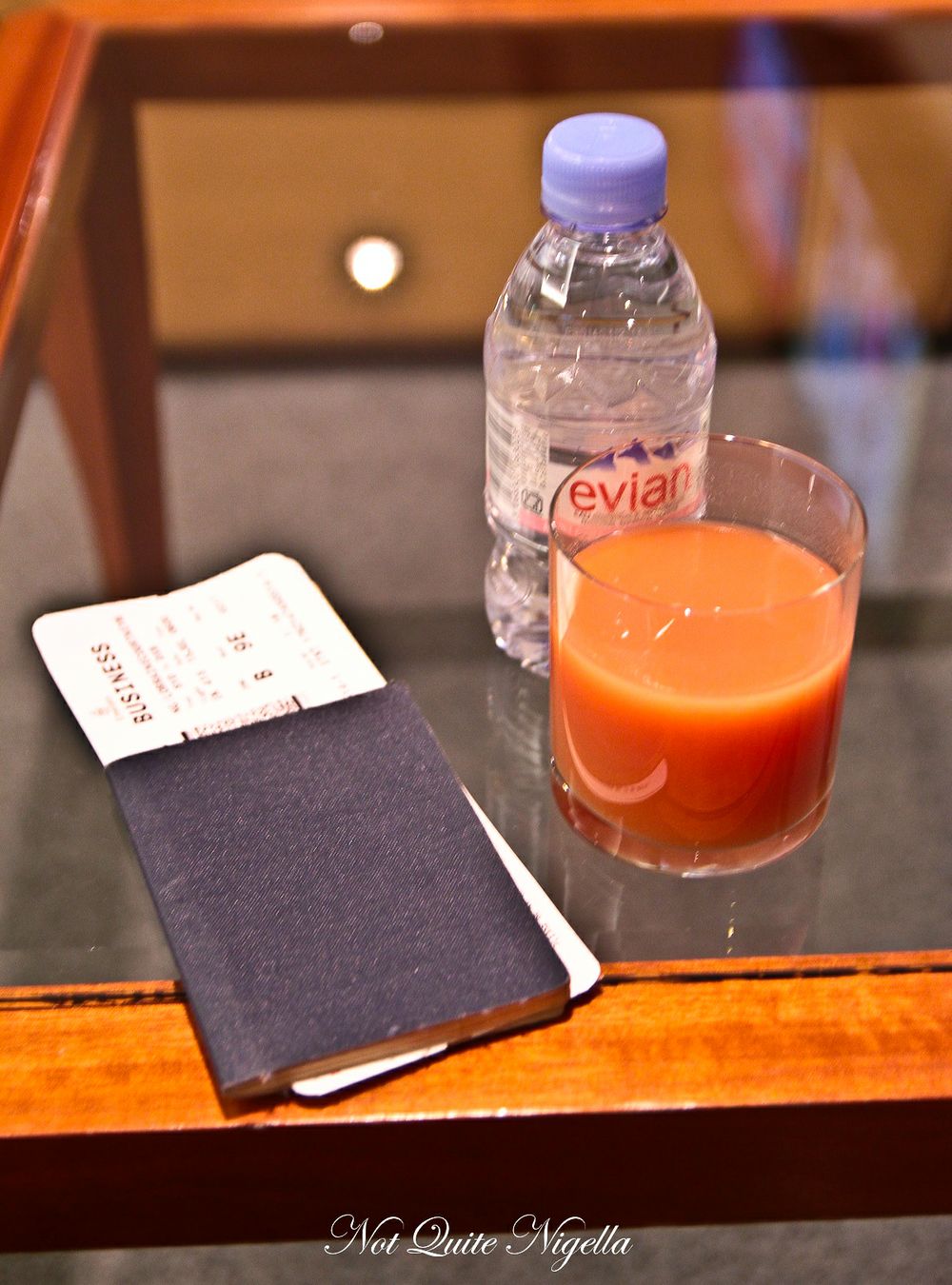 What is the one travel topic that is guaranteed to get tongues flapping? If you guessed flight upgrades, you'd be right. Everyone knows someone that has received the magical tap on their head and signal to turn left instead of right. It seems that everyone is eager to avoid long haul economy (and who can blame them?) and they're just as curious to know how the other half lives. I'm no exception! ;)

To get to Oman I would  be flying Emirates Business Class via Dubai and then onto Muscat. At 3 am on a Sunday morning, the alarm buzzed and I made my way to the airport for the 4am check in for the 6am flight. Access to the Emirates Lounge is a soft way to introduce you to early morning but Dear Reader, I must admit that I failed you. As good as the selection looked (I spied some delicious Yalla yogurt and some nice smoked salmon), I couldn't really cope with the idea of breakfast at 5am so it was a guava juice for me and some work before we were called for the flight. 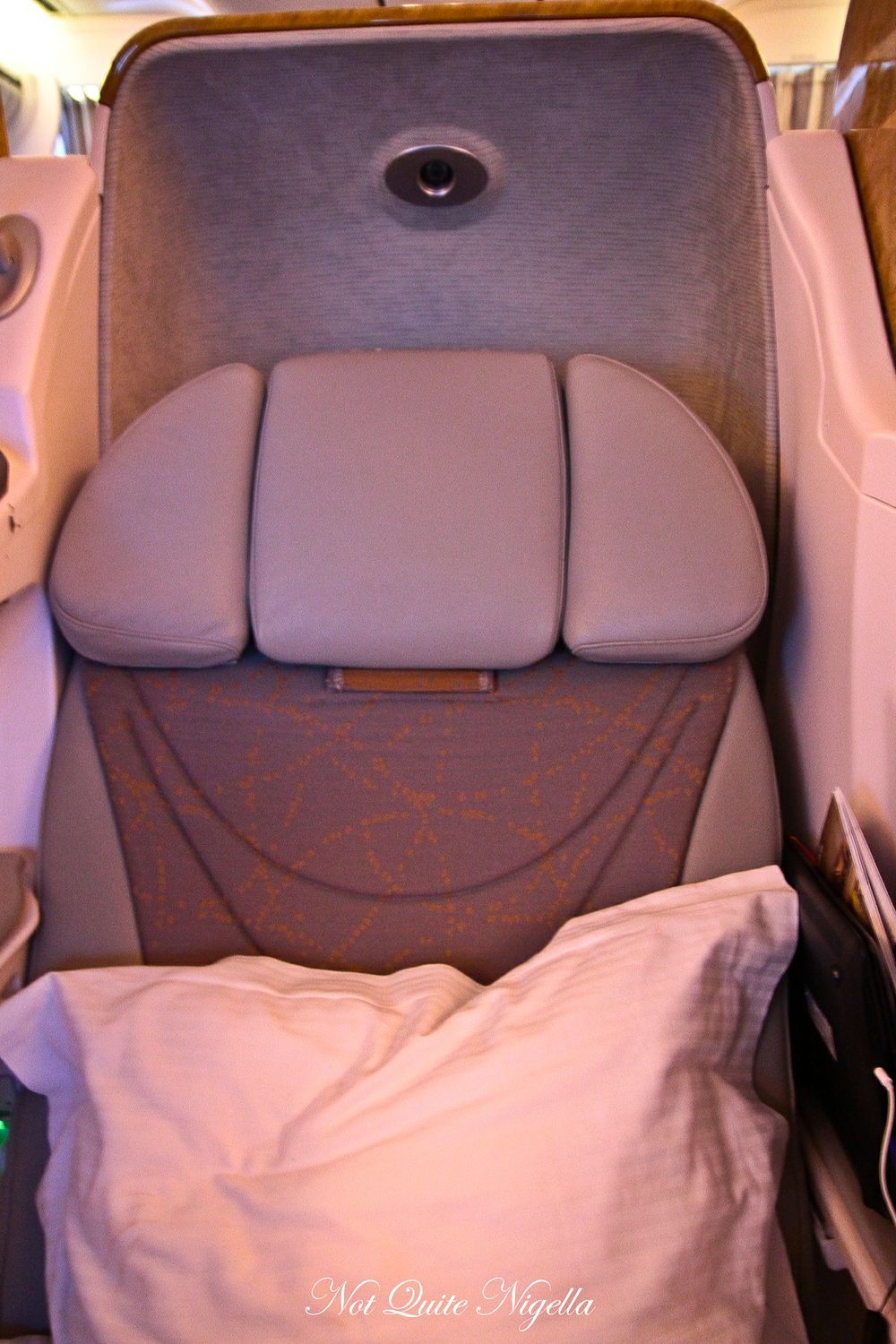 There is a separate walk way for Business Class which merges with the economy queue whilst First Class have their own dedicated separate queue. The Airbus 777 is a surprise as the configuration in the business class cabin is a 2x3x2 so the middle aisle has one locked in seat. The seats themselves aren't particularly small but sitting in the middle is not my ideal position as I tend to get up a lot to visit the ladies as I drink a lot, especially during flights. Too much info? Sorry! 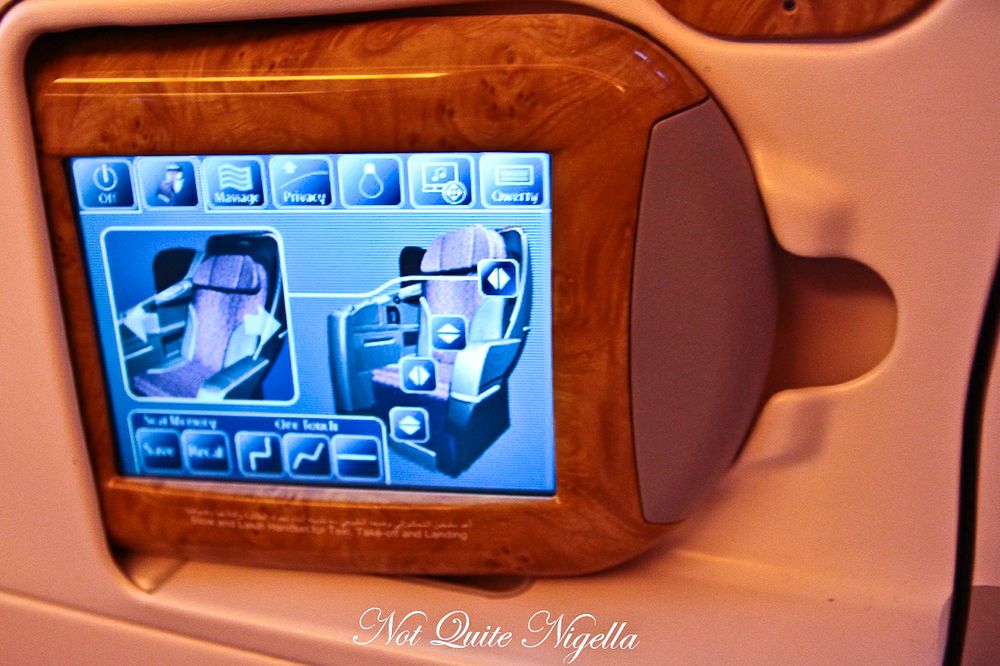 They take our coats and offer us Moët or orange juice and we settle in to explore the seats and the ICE (Information, Communication and Entertainment) console. The screen on the back of the seat in front of me is large and the most important thing, the bed is angled. It's not a totally lie flat bed but it will do for a much needed catch up on sleep. One of my favourite features is the massage chair with four settings and I switch this on while I survey my surroundings. There are privacy partitions between the seats which can be extended or dropped down. The seats have a hard shell for more privacy between rows. 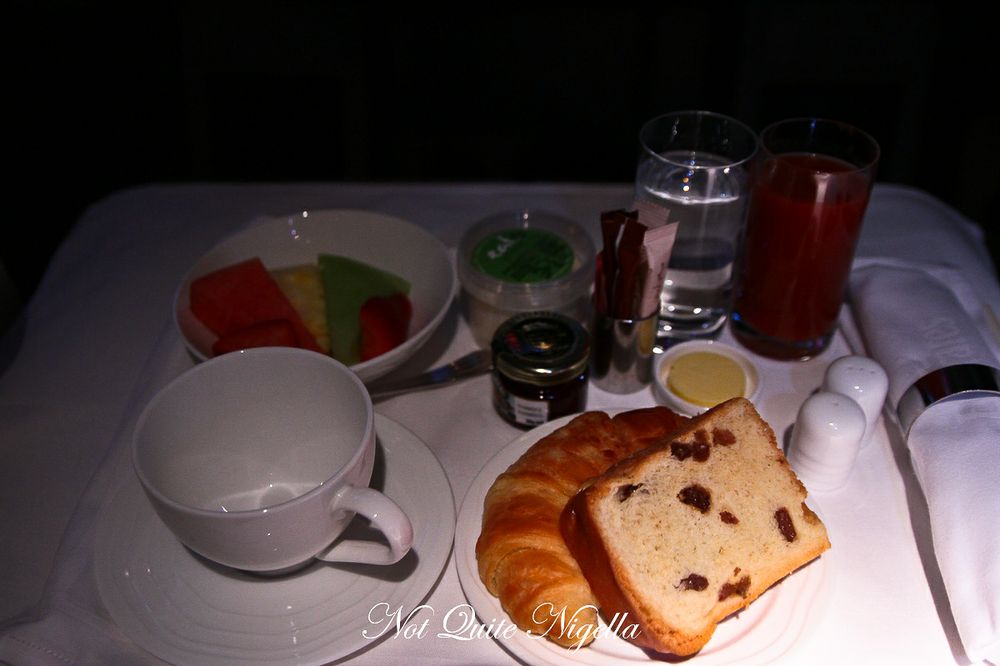 Packs containing a blanket, pillow and noise cancelling headphones are left on the seat and there's a bag with socks and an eye mask in the seat back pocket. After take off they ask us if we will be joining them for breakfast and I say yes and they lay a tablecloth down on the tray table which comes out from the right hand side at the press of a button. The breakfast menu starts with a choice of juice, sliced fruit, a pot of passionfruit yogurt, a slice of fruit brioche and a croissant and tea or coffee. In Emirates' business class cabin, they use Robert Welch cutlery and Royal Doulton cups and saucers. There is a pot of Beerenberg strawberry jam but the butter is a bit hard so you can't really use it on the delicate bread. The fruit and yogurt are particularly good with the latter having a rich and creamy texture. 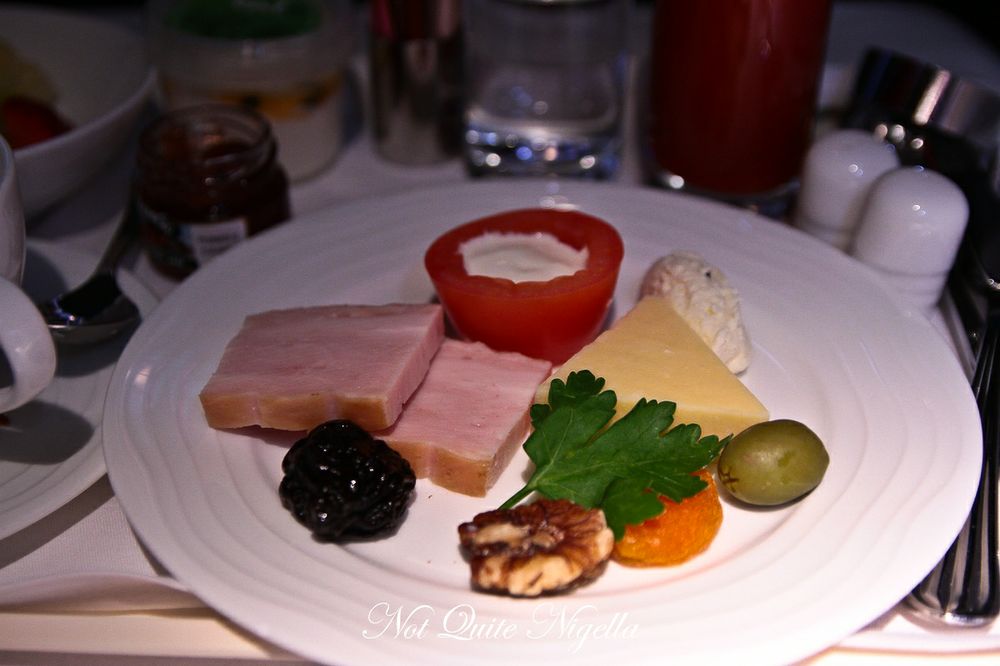 The main breakfast meal  choice is between a mixed grill, chive scrambled eggs, cardamom buttermilk pancakes and deli cold meats and cheese. I used to be a hot breakfast person but recently have converted to more continental breakfast offerings and so I go for the cold meat and cheese platter. This has smoked chicken, English cheddar cheese, an olive, half a hollowed out tomato filled with labne and a quenelle of herbed crumbled Persian feta and a prune. It's actually just what I need although I would have loved to have kept my bread plate for this as they took it to make room for this plate and by the time they came back with the bread offering (croissant, raisin brioche, muffins and pastry) I had finished it. To finish breakfast, one final thing a hot, wet towel to cleanse our hands.

The amenity kits are handed out once we take off and there's a separate kit for men and for women. The women's is housed in a pearl satin look Bvlgari bag with moisturiser, perfume, hand cream (unscented), brush, toothbrush and toothpaste, hand mirror, tissues and Bvlgari scented oshibori (wet towelette). The only two things that are possibly missing are ear plugs and lip balm which I usually bring with me just in case. 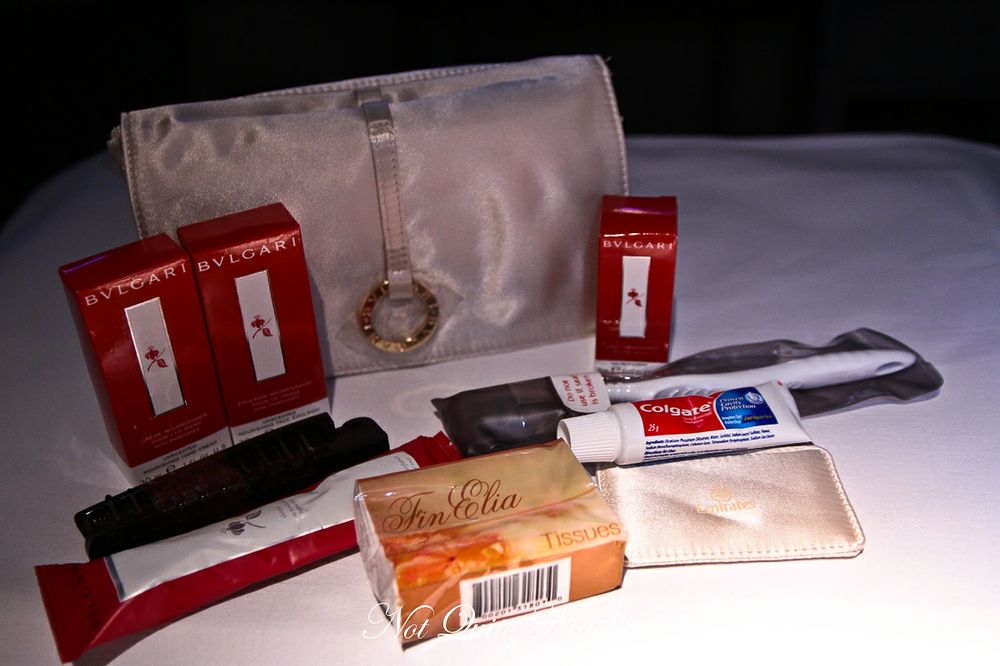 The entertainment system has a range of new movies and television shows although the only movie that really tickles my fancy is Jeff Who Lives At Home which I had already seen. The tv shows aren't bad but aren't the latest season so disappointed, I bypassed those and listened to music for a lot of the time until I fell asleep for a good six hours sleep. The cabin temperature is actually quite warm which I prefer.

Oh and I don't really delve into toilet details (I'm very uptight about these things Mr NQN tells me) but the bathroom facilities are very well stocked. There are extra razors and toothbrushes in them as well as men's and women's cologne. A nice touch are terry towelling face washers to remove makeup instead of just tissues or paper towels.

Awoken by the tinkling of cutlery (I'm like the pet that gets excited by the sound of their food bowl being filled ;) ) I see that I've slept for a good amount and we have eight hours remaining of the 14.5 hour flight. Time for something to eat as it's about lunch time in Sydney now. There are light bites available throughout the flight and they all sound rather tempting. Forgive the photography as the cabin was very dark to allow people to sleep. There's a selection of sandwiches (roast chicken & aioli, hot smoked salmon and mini croissant with French brie). There are also hot snacks like an Indian trio of samosa, pakora and kofta or a vegetarian baked potato. 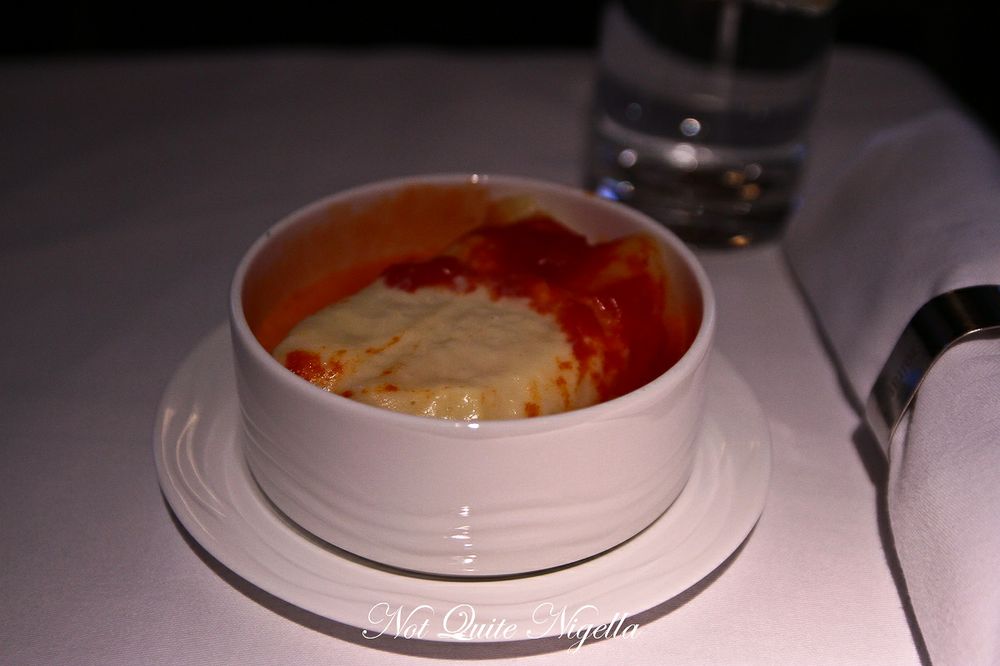 The snack I went for the prawn and crayfish cannelloni which was actually quite nice. There were two tubes of cannelloni pasta filled with a cheese, prawn and crayfish filling and a tomato and herb based sauce. The pasta was tender and not dried out as it sometimes can be and the filling was rich in flavour but light in texture. 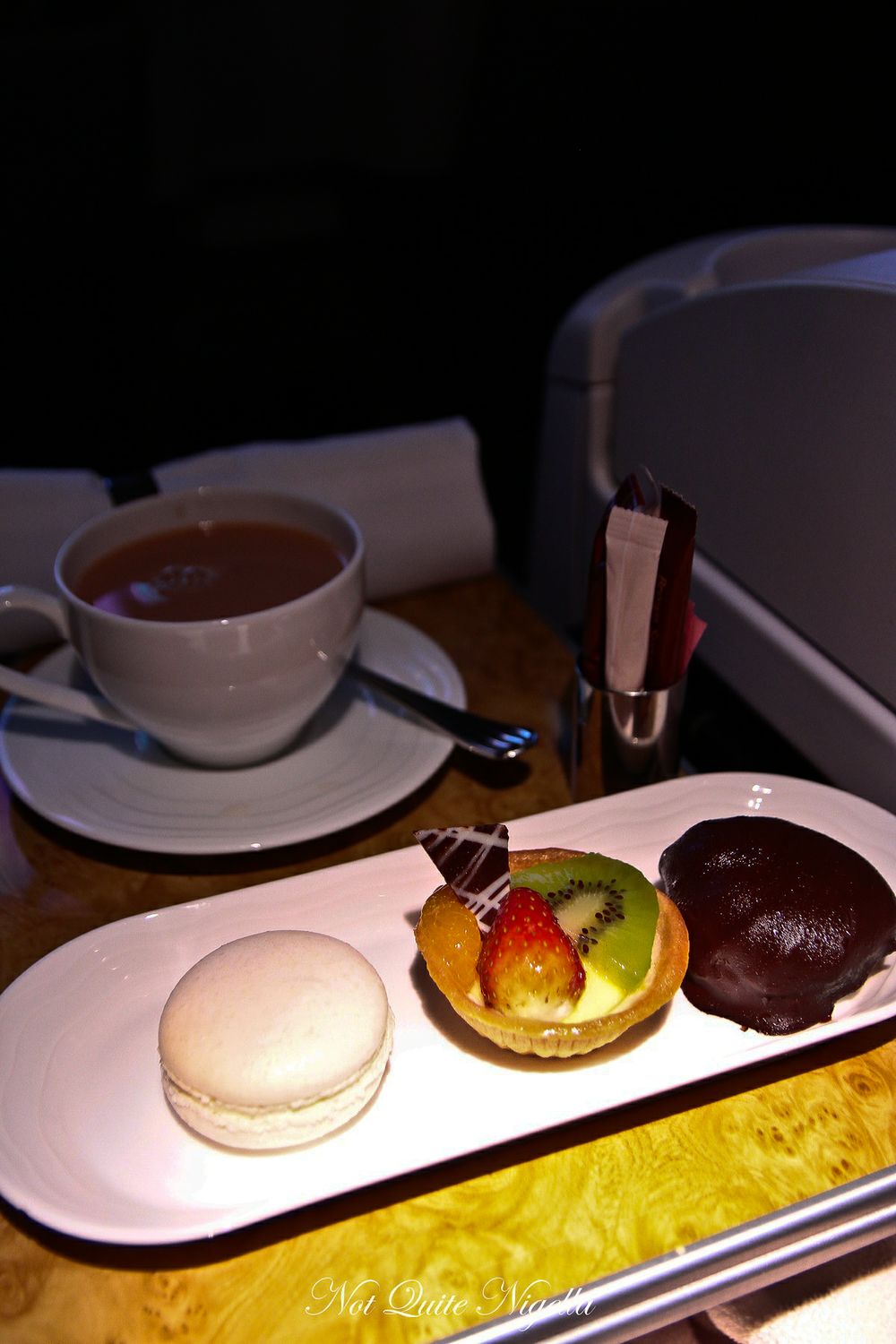 A little later, the "sweet selection" tempts me from the menu and figuring that it's around about afternoon tea time, I try one of those with a cup of tea with the friendly passenger sitting next to me who just happens to be a journalist on an unrelated trip. There is a custard filled chocolate coated profiterole, a custard fruit tartlet and my favourite a soft and light vanilla macaron. 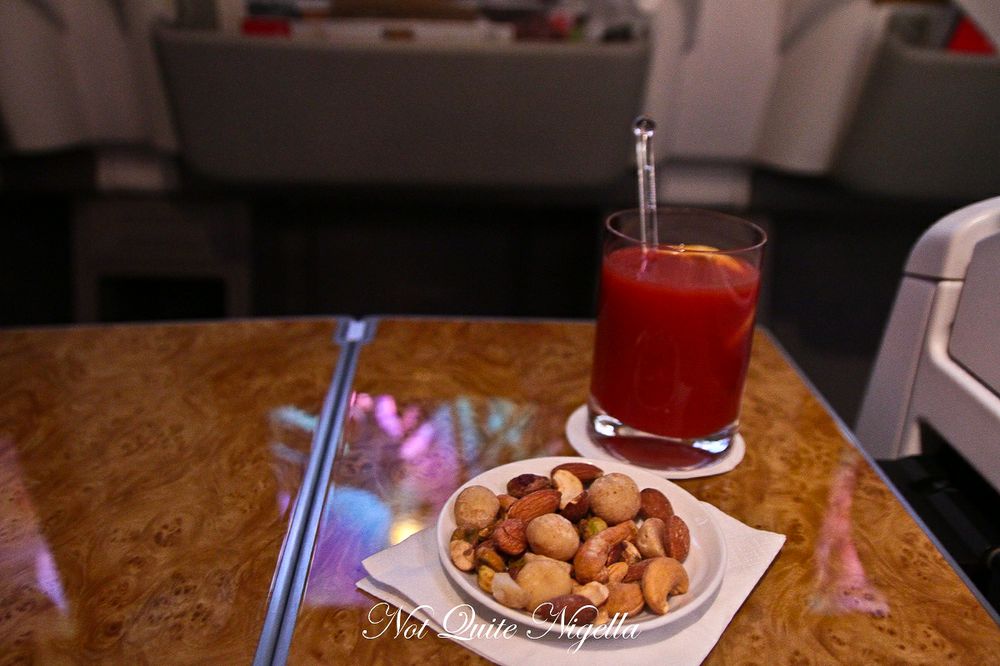 A short nap later and I'm being tapped awake to see if I would like lunch which is actually in the afternoon Sydney time.  I had spied lobster on the menu so I happily agreed. A virgin mary and a plate of warm mixed salted nuts (pistachios, almonds, macadamias and cashews) arrives. 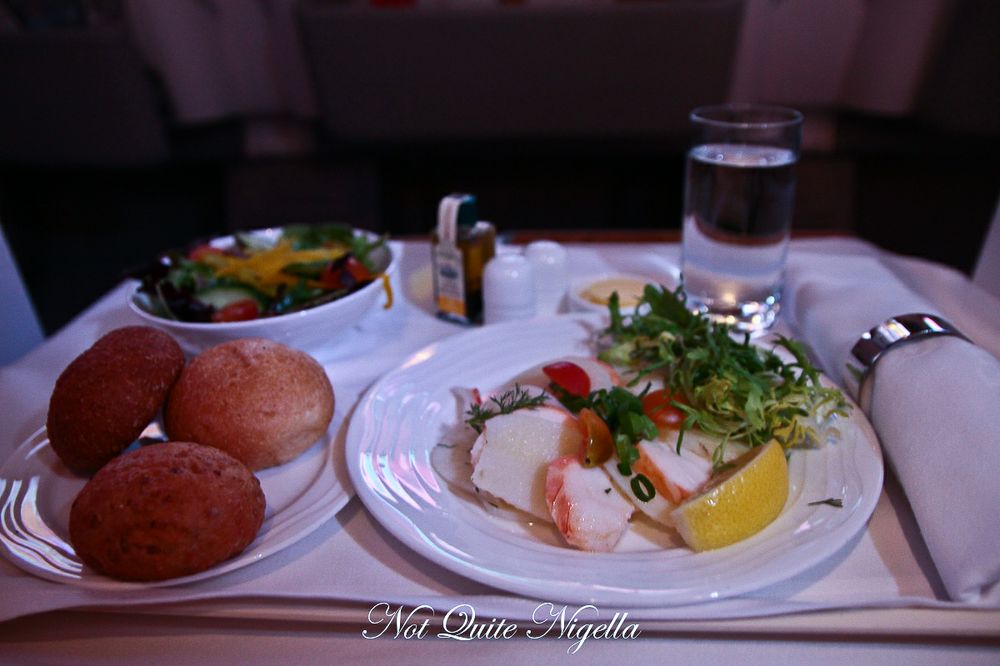 Considering how much food I've eaten, I decided to choose from the healthy menu. The first course has lobster medallions served with a potato and dill salad and a slice of lemon. It differs slightly from what is on the menu but the lobster is fresh and succulent and alternated with slices of boiled potato. It could use a bit of a dressing apart from the lemon so I use the balsamic and olive oil dressing given with the bread. The seasonal side salad is made up of leaves, yellow capsicum and cucumber and comes with an Italian balsamic and olive oil dressing. 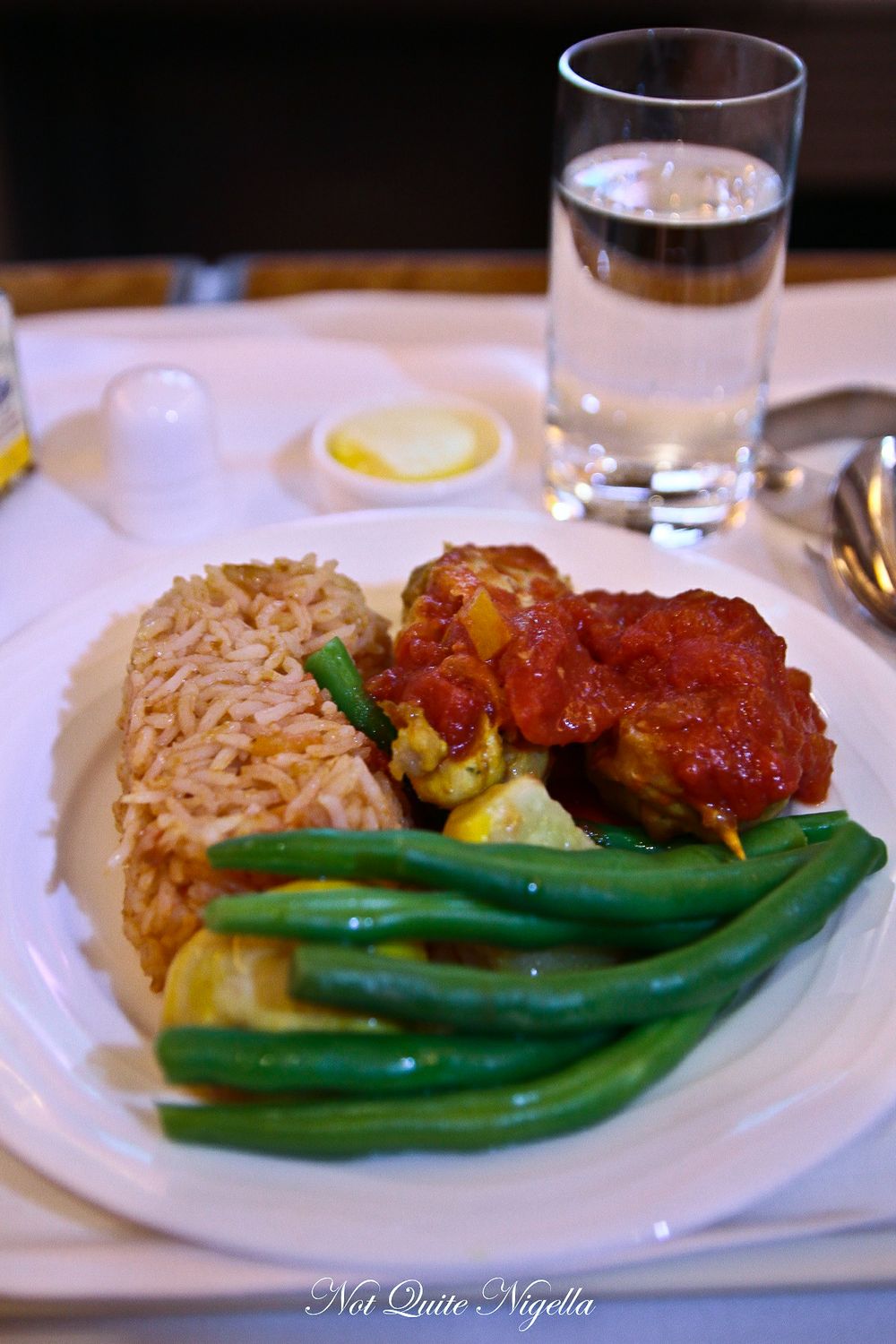 The main dish is two grilled chicken thigh kebabs that have been marinated in yogurt and ginger. It is served with yellow squash, green beans and a tomato based kabsa sauce. The chicken is tender and quite flavoursome but the rice is a little wet and I leave this behind. 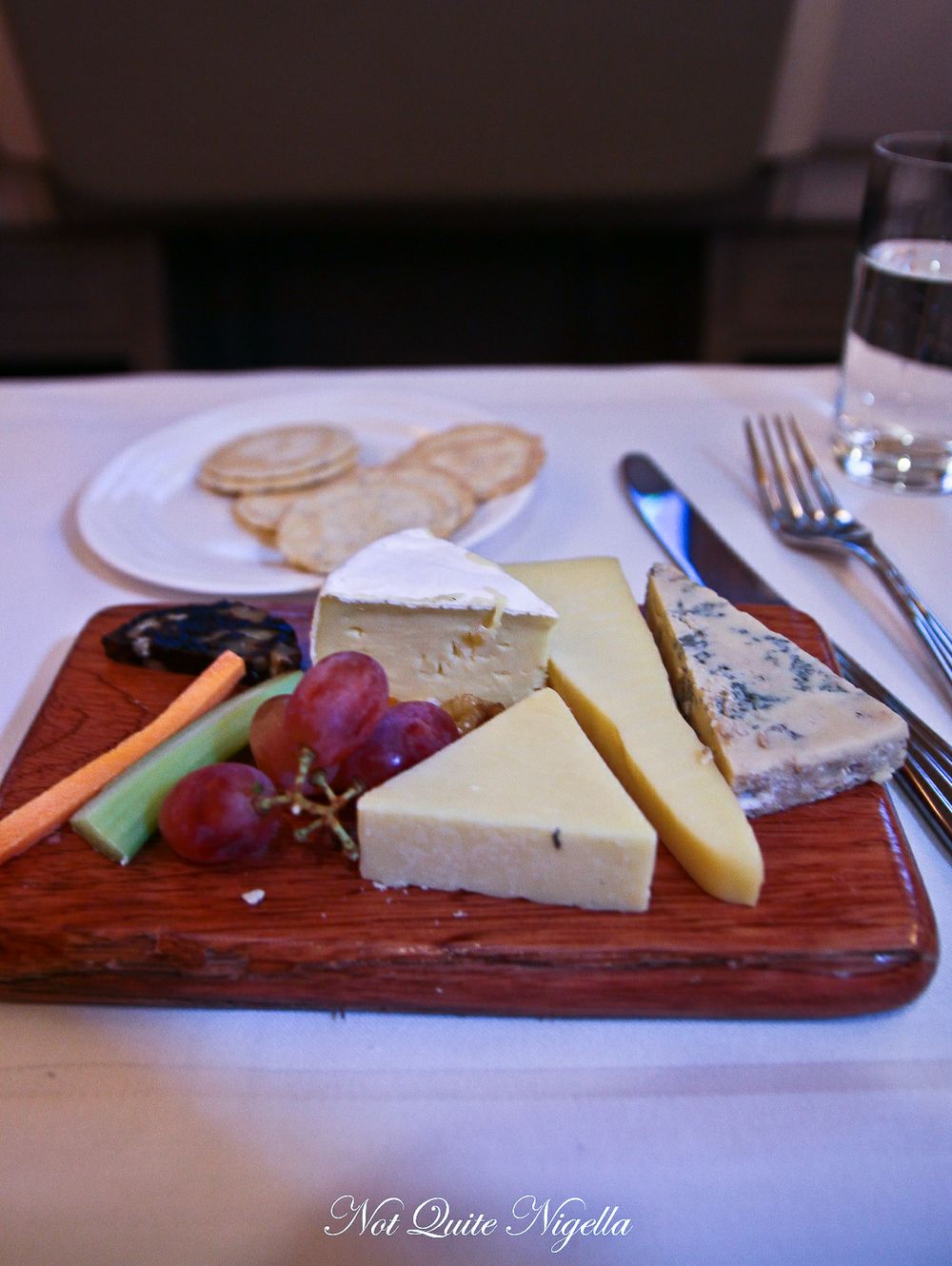 Okay, so the real reason why I chose from the light menu was so that I could have the cheese plate! There's a creamy mild blue, a brie (a little too cold still), a cheddar and an edam with all being quite good but the blue and edam were the picks. 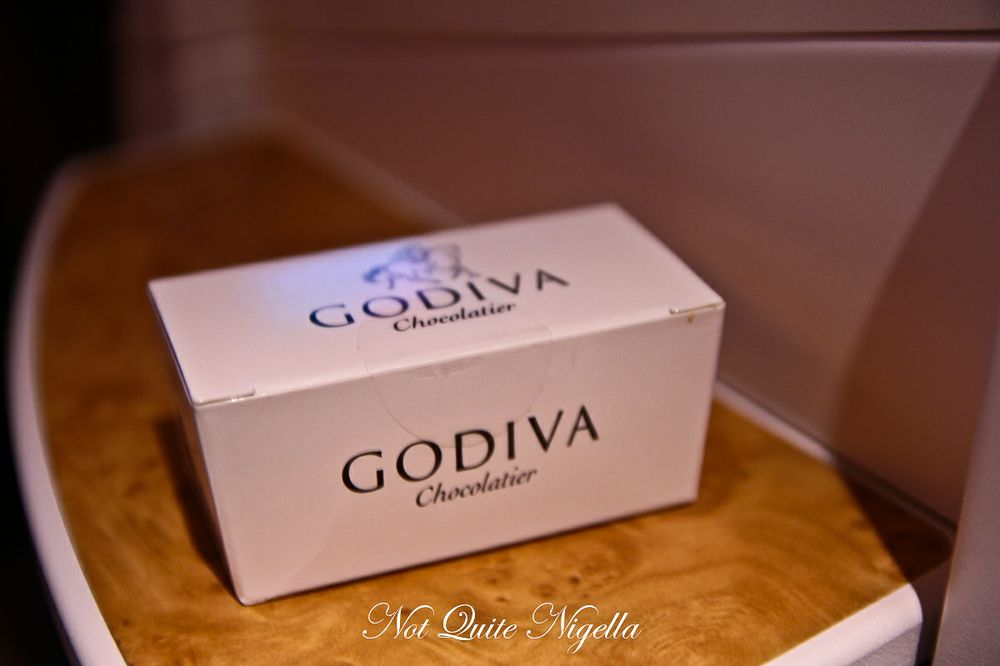 A quick trip to the bathroom means that I miss out on chocolates (I don't know why they don't just leave them on your tray) but my journalist seat buddy kindly asks for some. The Godiva chocolate truffles come two to a box and a sweet ending to a long flight.

So tell me Dear Reader,  have you ever been upgraded? And do you have any tips on getting upgraded on flights?

NQN tested out the flight as a guest of Emirates