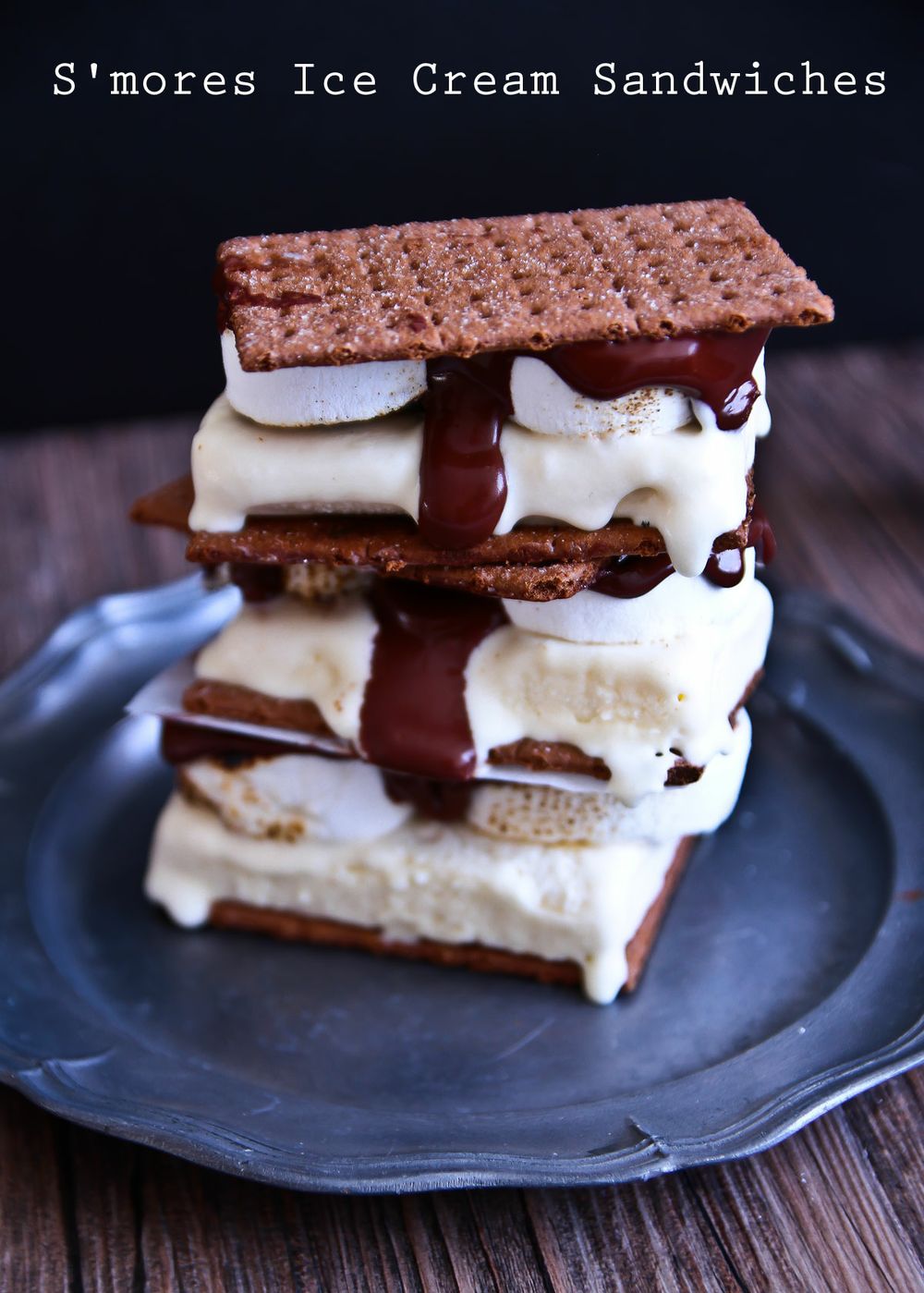 "That was the worst thing I ever put in my mouth" my divine hairdresser Elly said to me one day. She was cutting my hair and talking about the time I took her out for yum cha and she tried chicken's feet. But to her credit, she tried it and that's the most you can really ask for anyone. I know that the jellied, bony morsels that look like witch's claws aren't to anyone's taste-lord knows that if I order a steamer, I'm usually the only one eating these as Mr NQN won't touch them under any sort of duress.

When Mr NQN's brother Manu tried these S'mores ice cream sandwiches, he thankfully had the opposite reaction. "Wow, you could sell these!" he said excited looking at the ice cream sandwich from all angles. Non American readers may only have a television viewer's angle on the S'more but it is essentially a Graham Cracker with a layer of chocolate and a layer of toasted marshmallows. Legend has it that it was invented by a Girl Scout leader and the toasting of the marshmallows was done campside. Nowadays, they're a sweet dessert enjoyed in situ or al fresco. And I had never tried one because alas Graham Crackers are hard to find in Australia. 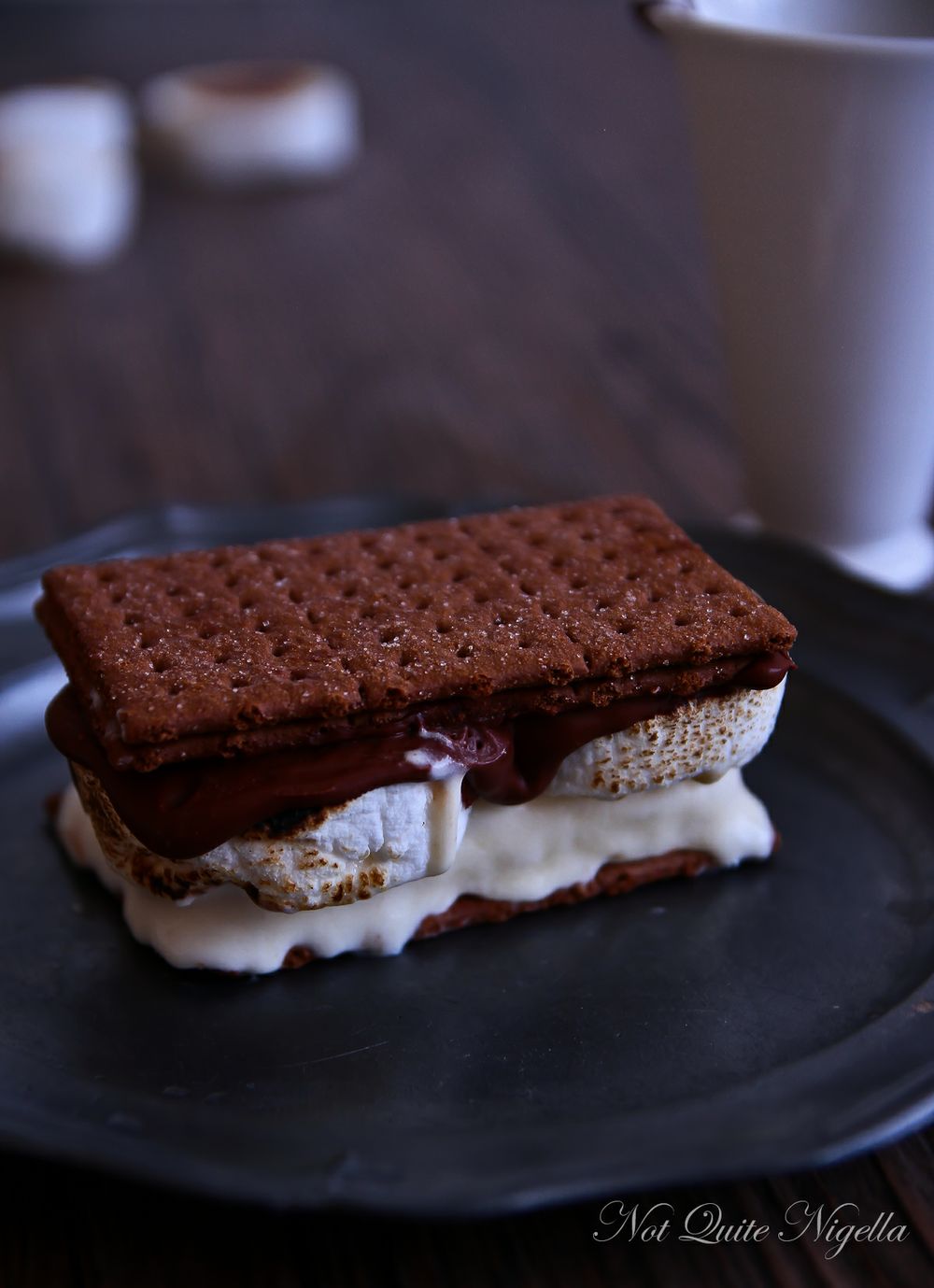 Until the day I happened to wander into a Filipino store in Fairfield while researching a story. I had time to kill and wandered the aisles. I saw a packet of chocolate Graham Crackers and they immediately went into my shopping basket. Graham crackers are actually just like sweet, plain biscuits (cookies) and are not like water crackers or savoury crackers as I had once assumed from the name. I stashed them in my pantry occasionally glimpsing them from time to time. I figured that I'd make a cheesecake crust using them but then I found myself wandering another aisle and putting gigantic jet puffed marshmallows in my basket and then I decided to not just do S'mores but an ice cream sandwich version for our warmer weather.

As they are a campside snack, S'mores are really easy to make and I tried to keep this as simple as possible, even with making your own ice cream. Of course feel free to buy the ice cream and chocolate sauce along with Scalliwag biscuits as they're pretty close to chocolate Graham Crackers. Once the chocolate sauce is made and the marshmallows toasted, it's really a matter of putting these all together and eating them with your mouth wide open and eyes closed in bliss. The liquid chocolate sauce give it a dark richness, toasting the marshmallows makes them gooey with the lightest sugar crust on the outside and the vanilla ice cream and chocolate Graham Crackers give it creaminess and crunch. In front of the campfire or the television...

So tell me Dear Reader, what is the worst thing that you've ever put in your mouth? And the best thing? 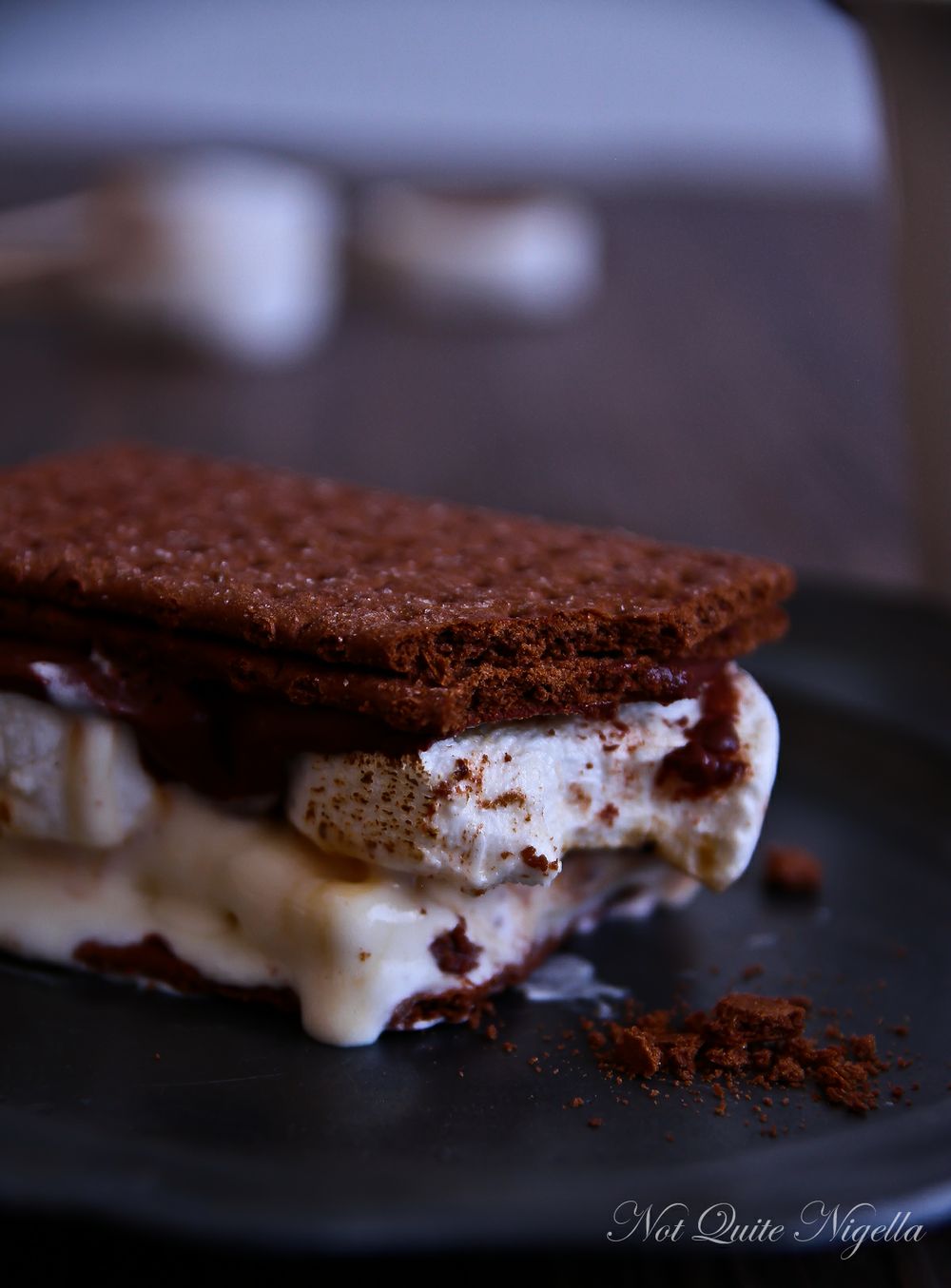 An Original Recipe by Not Quite Nigella (well as much as a S'more can be...) 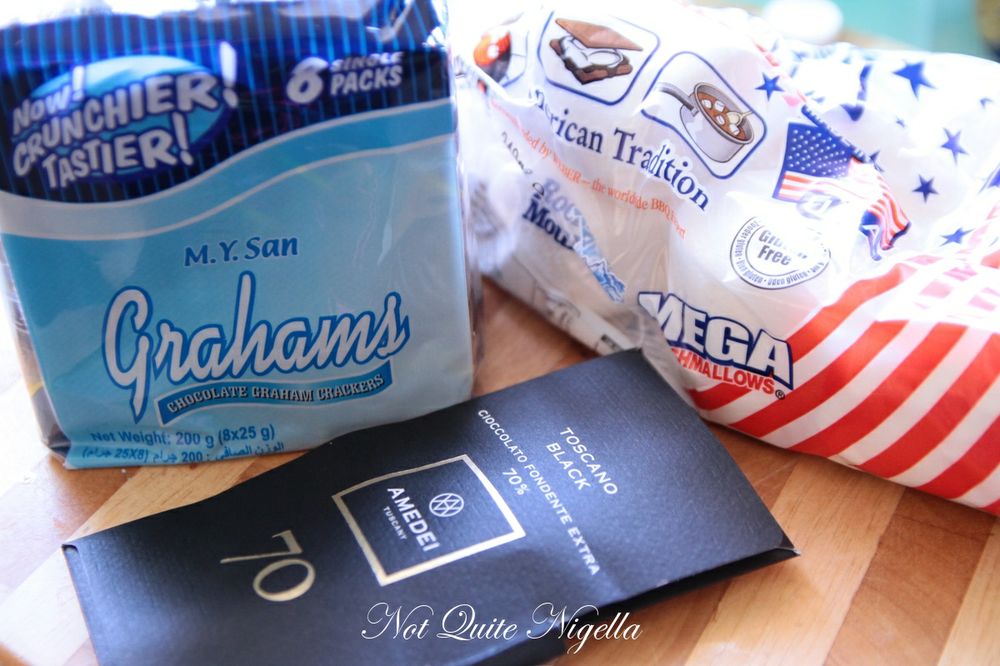 Buyer's tip: I found chocolate Graham Crackers at a Filipino store just outside Fairfield train station. I'm not suggesting that you might want to make a pilgrimage there unless you live closeby but other Filipino stores might sell them too. Here is a recipe for making Graham Crackers in regular or gluten free (to make regular ones just replace the gf flours with plain flour and add some cocoa powder). If you can't be bothered with the baking palaver, and nobody says that you need to in times of dessert crises,  Scalliwag biscuits are close to the chocolate Graham Crackers and you can easily find these in Australia.

Step 1 - In the bowl of an electric mixer, whip the cream until soft peaks form. Add the sifted icing sugar and vanilla and whip and then spread it out into a small rectangular metal tray and place in freezer until completely frozen. 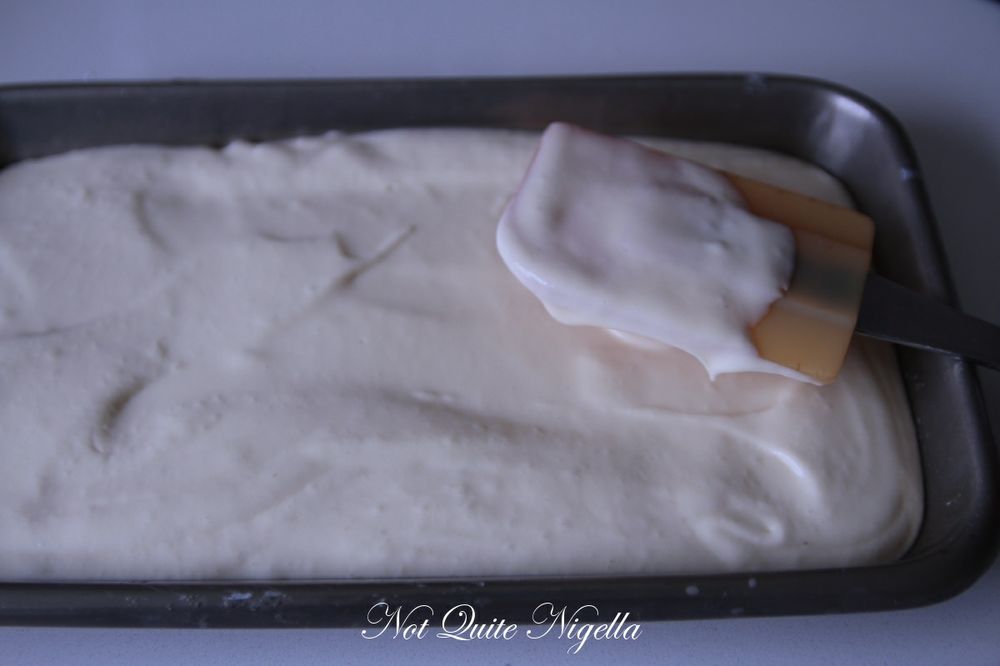 Step 2 - Make these when you want to serve them-you can make these ahead of time but I like it when the biscuit part is crisp and then will soften a little if frozen. Make the chocolate sauce by melting the chocolate in a microwave or in a double boiler. Add the cream and mix until you get a liquid chocolate sauce. 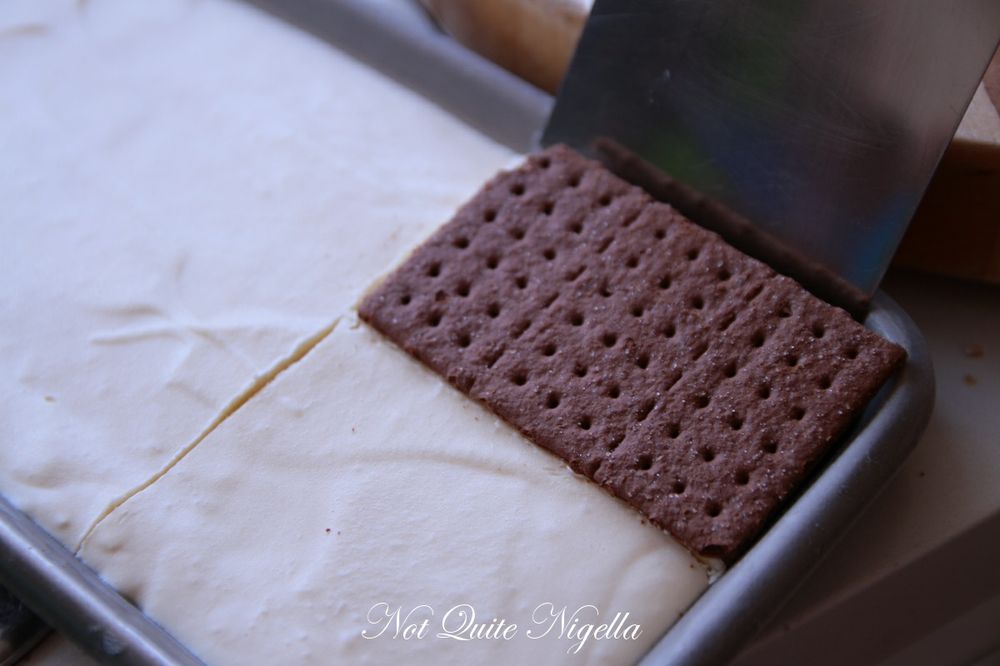 Cutting up the ice cream in Graham Cracker sized slices 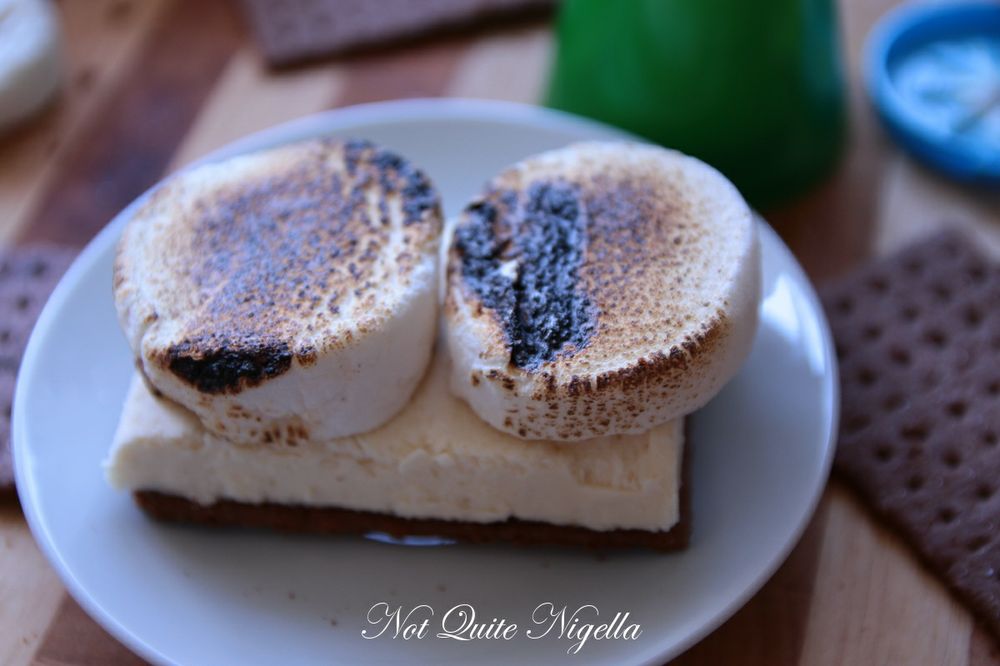 Step 3 - If you are using the very large marshmallows, slice them into three pieces and place them on a flameproof plate. You can microwave them on the Graham Cracker too. Or, in the Year-Of-Living-Dangerously or Flashdance version you can use a blowtorch to lightly torch the marshmallows-some of them might catch flame, just blow them out but keep the kids away at a safe distance (although I'm sure that you know that). Slice the ice cream into Graham Cracker sized rectangles and place one on a Graham Cracker. Top with the already toasted marshmallows and chocolate sauce and add another Graham Cracker on top. 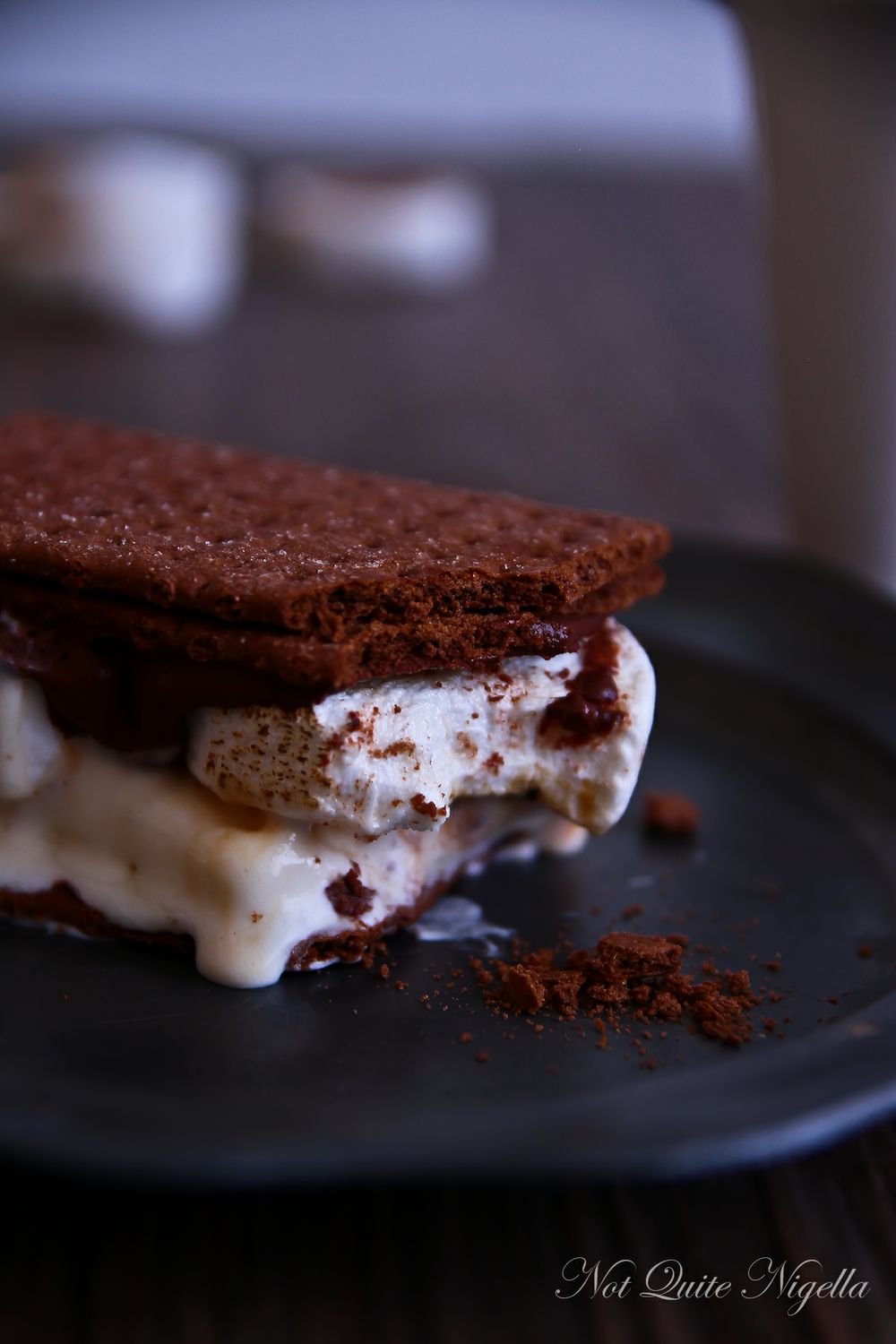