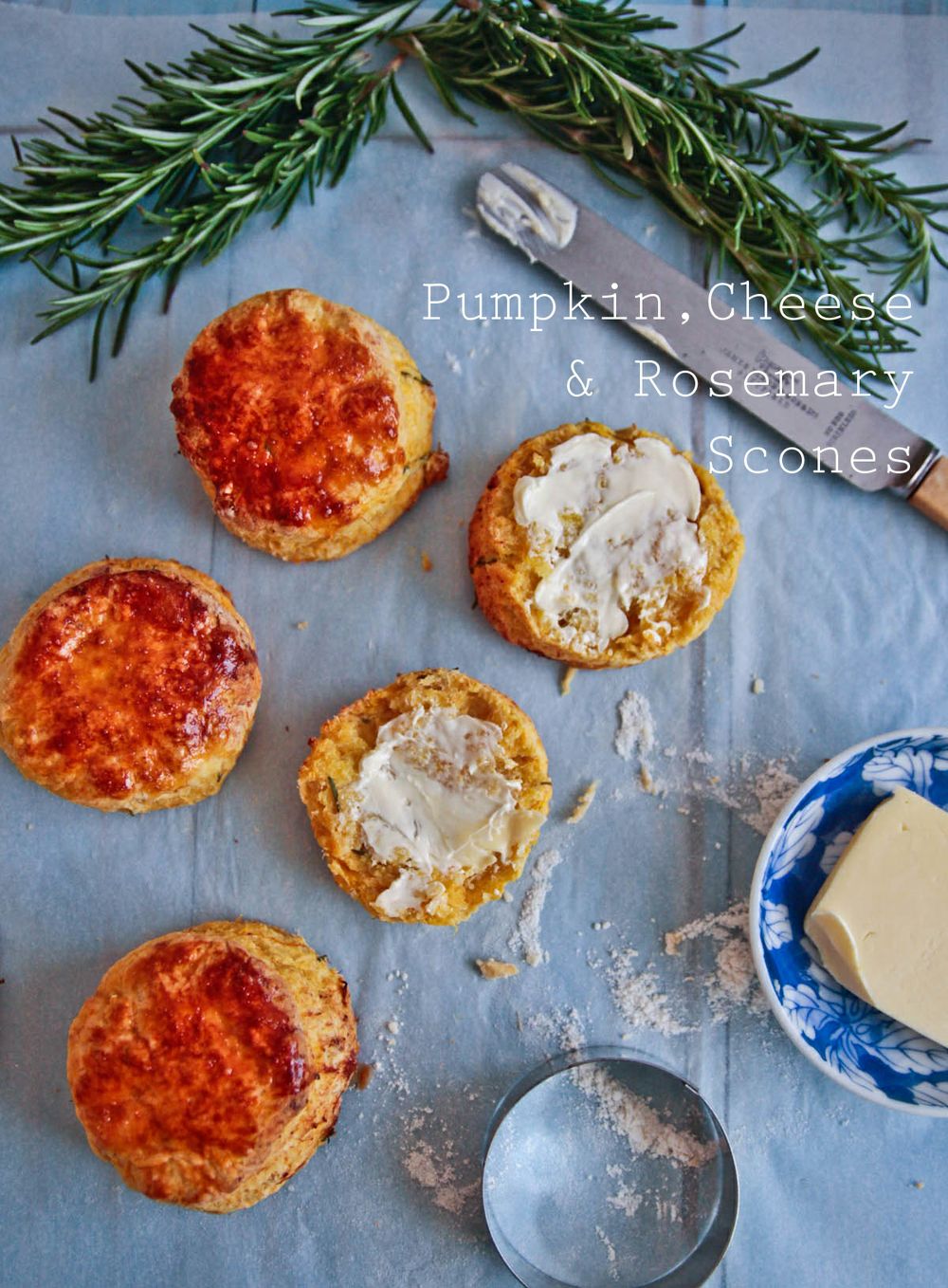 What's in a name? Well a lot it seems. Once upon a time, I knew a man called Roy McCool. I know, that's quite a name isn't it? His gorgeous fiancee used to joke that she was just marrying him for his last name. I must admit that merely by the fact of his unique moniker, I automatically thought that he was cool. Names are important after all and sometimes there are different names for the same item. Take for instance how in Australia we called cookies biscuits. But biscuits in America are really like scones here. And scones in America and Scotland are triangular in shape and sweeter while Australian scones are usually round. And let's not even get into the difference in pronunciation!

Well, a week or so ago I came across Maureen's recipe for biscuits served with gravy . I always thought that biscuits were like scones but if you start to research things, there are lots of opinions going every which way. The only consensus that I could find was that biscuits are almost always savoury whereas scones in all countries are generally served sweet although they can be savoury. In Australia, you usually find them with jam and cream. Some Australian scone recipes use butter and have a similar ratio of ingredients to the American biscuit recipes. 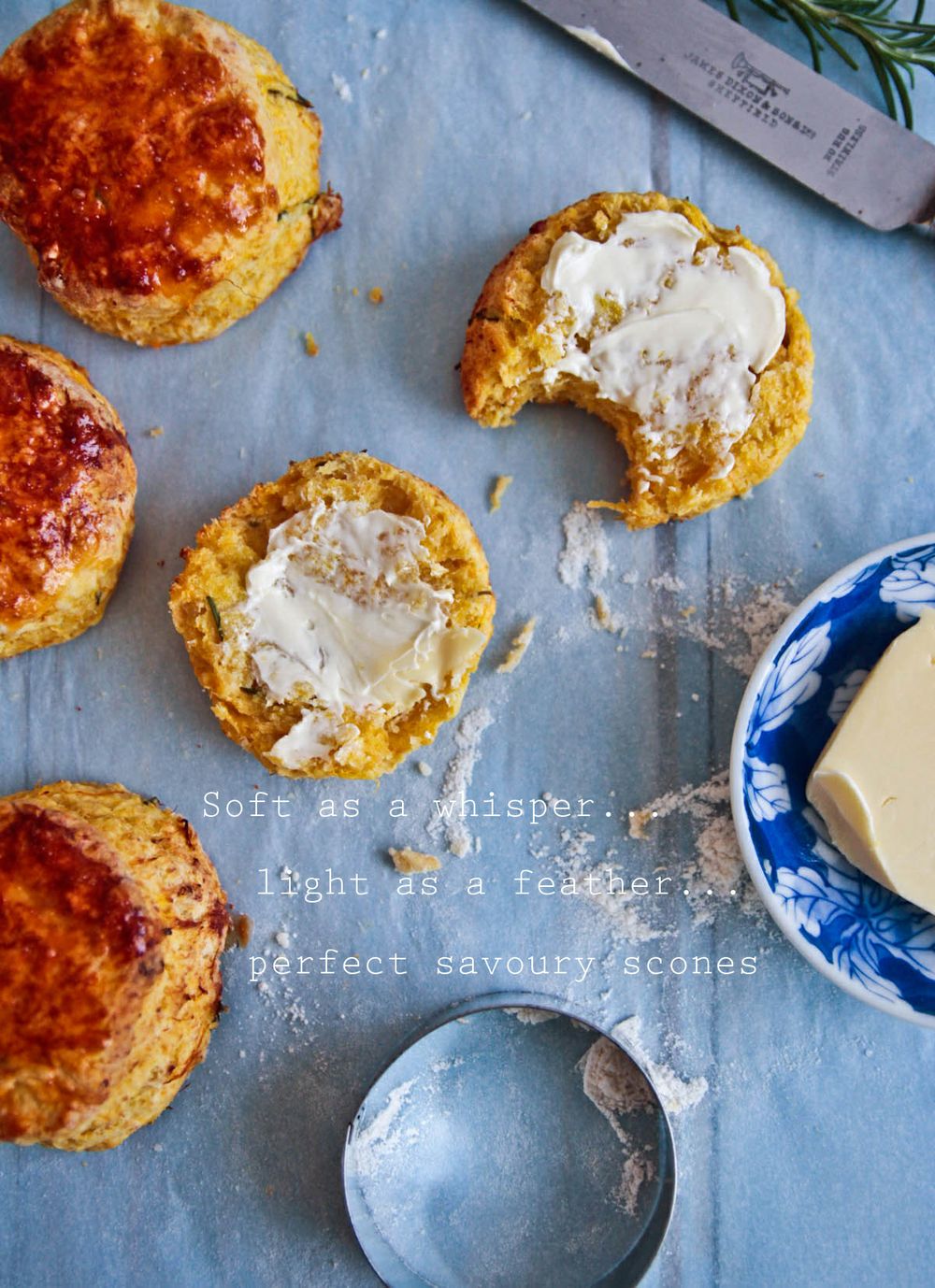 So while my head was spinning with butter to flour to sugar ratios I decided to bury my head in the kitchen and make a savoury version of scones or biscuits. Pumpkin scones were made famous here by a Queensland politician's wife Flo Bjelke-Petersen back in the 70's and I recall my first bite of one at my godmother's house. It was so soft and delicate that I reached for a second before my parents scolded me for not asking politely for a second one. So I adapted Maureen's recipe to suit pumpkin which is in season and I added rosemary for this upcoming Anzac Day and cheese for additional savoury flavour.

Once baked, I removed them from the oven and split one in two and spread it with butter which melted into the soft-as-down scone. The pumpkin gave it flavour and moisture, the rosemary aroma and the cheese a savoury flavour. And they were so good warm and buttered then I ate three whole ones in a row before realising that I needed to photograph them. If I could say anything to you this week between crumbly mouthfuls of scone, it's I urge you to make these-they're lip smackingly divine. Thankfully there was nobody to scold me for not asking politely because that's not McCool behaviour! ;)

So tell me Dear Reader, do you think that your name suits you? If you could have any name, what would it be? And what's your perspective on the biscuit and scone question? Which do you prefer? 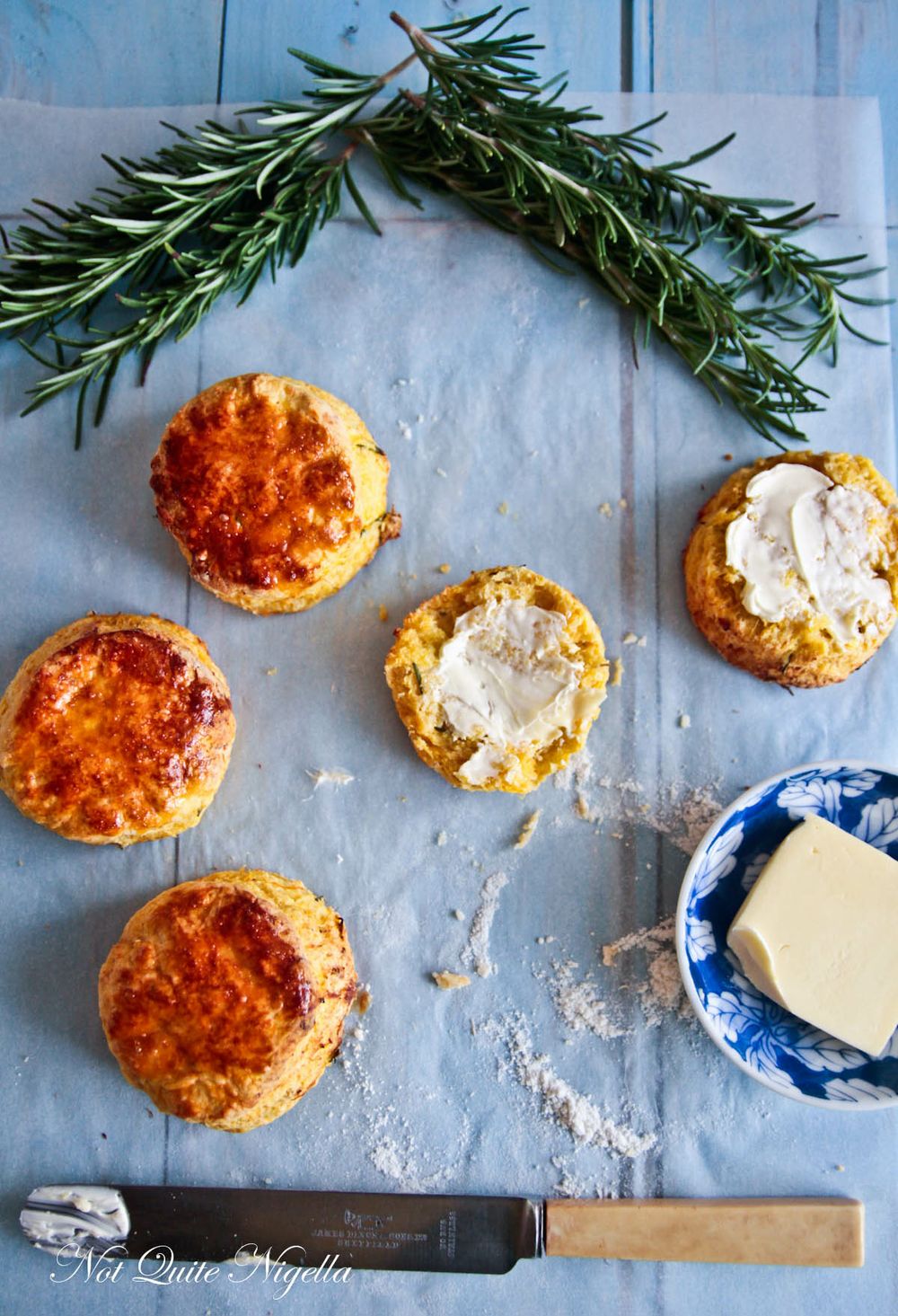 An Original Recipe by Not Quite Nigella, adapted from Orgasmic Chef 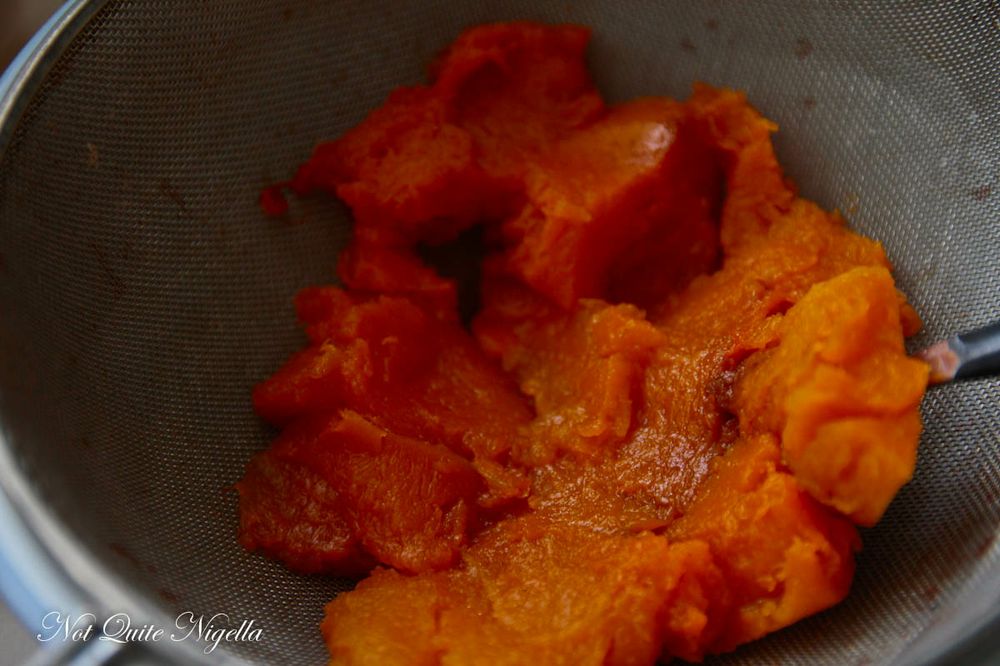 Draining the pumpkin of excess moisture

Step 1 - Preheat oven to 200C/400F and line a baking tray with baking paper. In a food processor place the flour, baking powder, salt and cream of tartar and whiz to combine. Add the butter and whizz again until mixture resembles breadcrumbs. 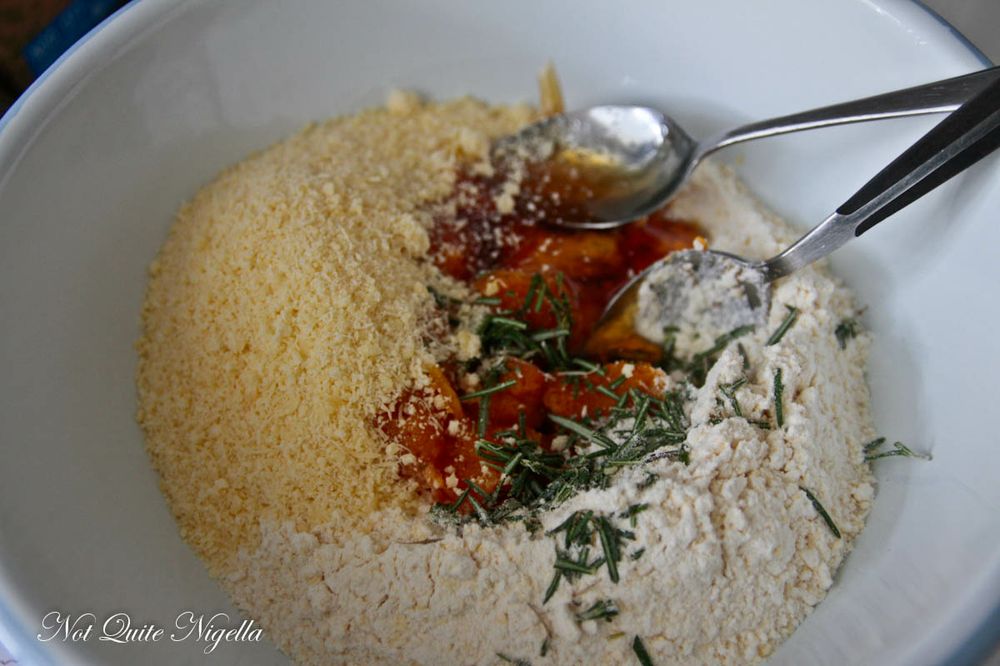 Step 2 - Empty this into a large bowl and add the pumpkin puree, cheese, honey and rosemary and using your hands, knead to combine. It may take a few minutes and it may feel like it won't come together but it will and it's a soft mix so it's not too hard to work. When it comes together, shape it into a ball. Place on another sheet of baking paper and press down on the dough so that it is about 2cms or three quarters of an inch high. 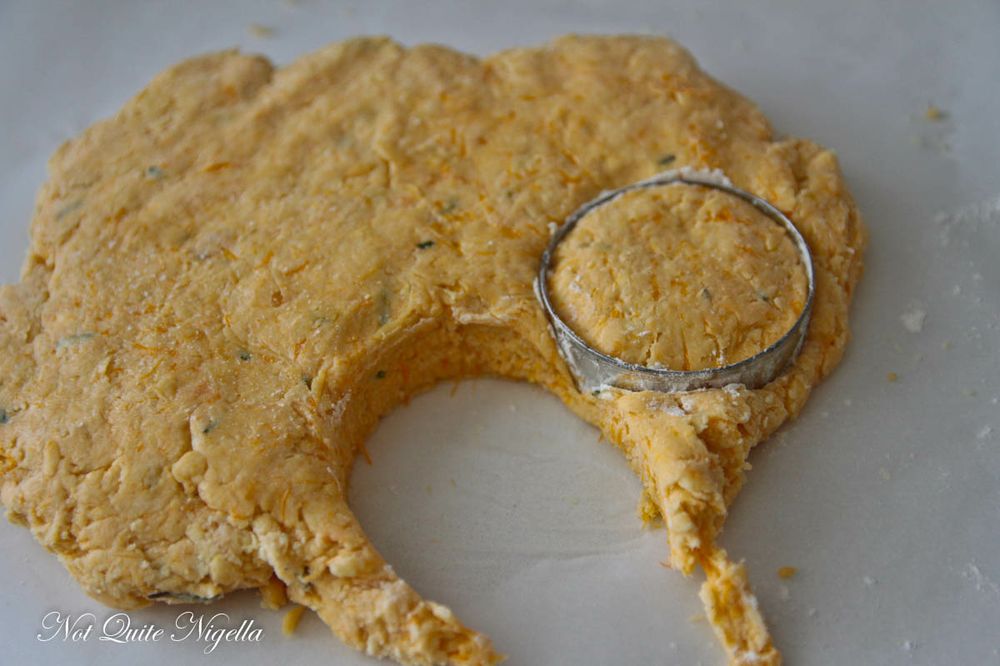 Step 3 -  Take a 6cm cutter and dip it in some flour and press out circle making sure not to twist the cutter-the cutting motion should be straight up and down to help the scone rise and twisting the cutter inhibits this. Break the egg yolk up and brush over the top of the scones. Bake for 15 minutes. Eat three in a row, warm and spread with butter ;) 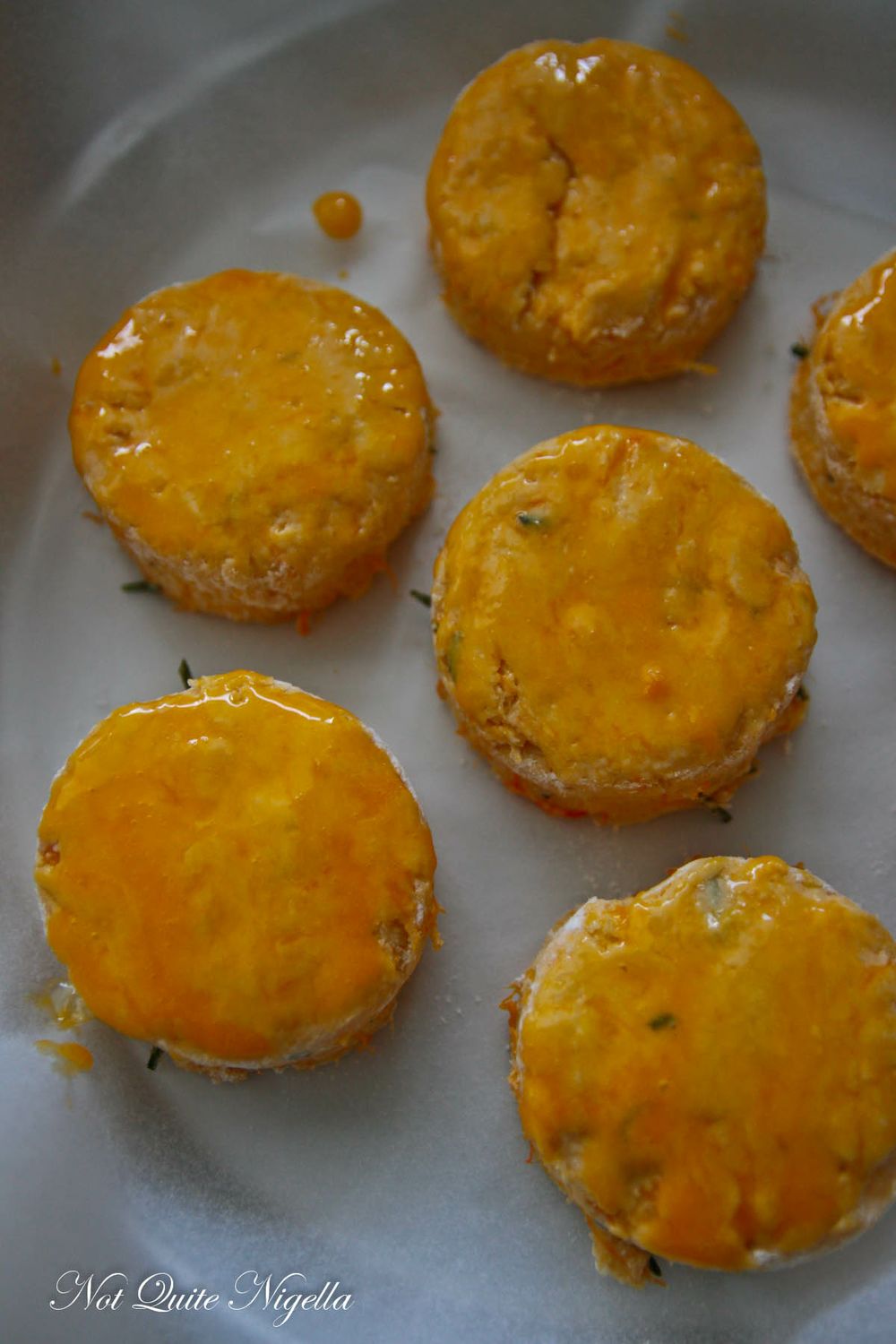