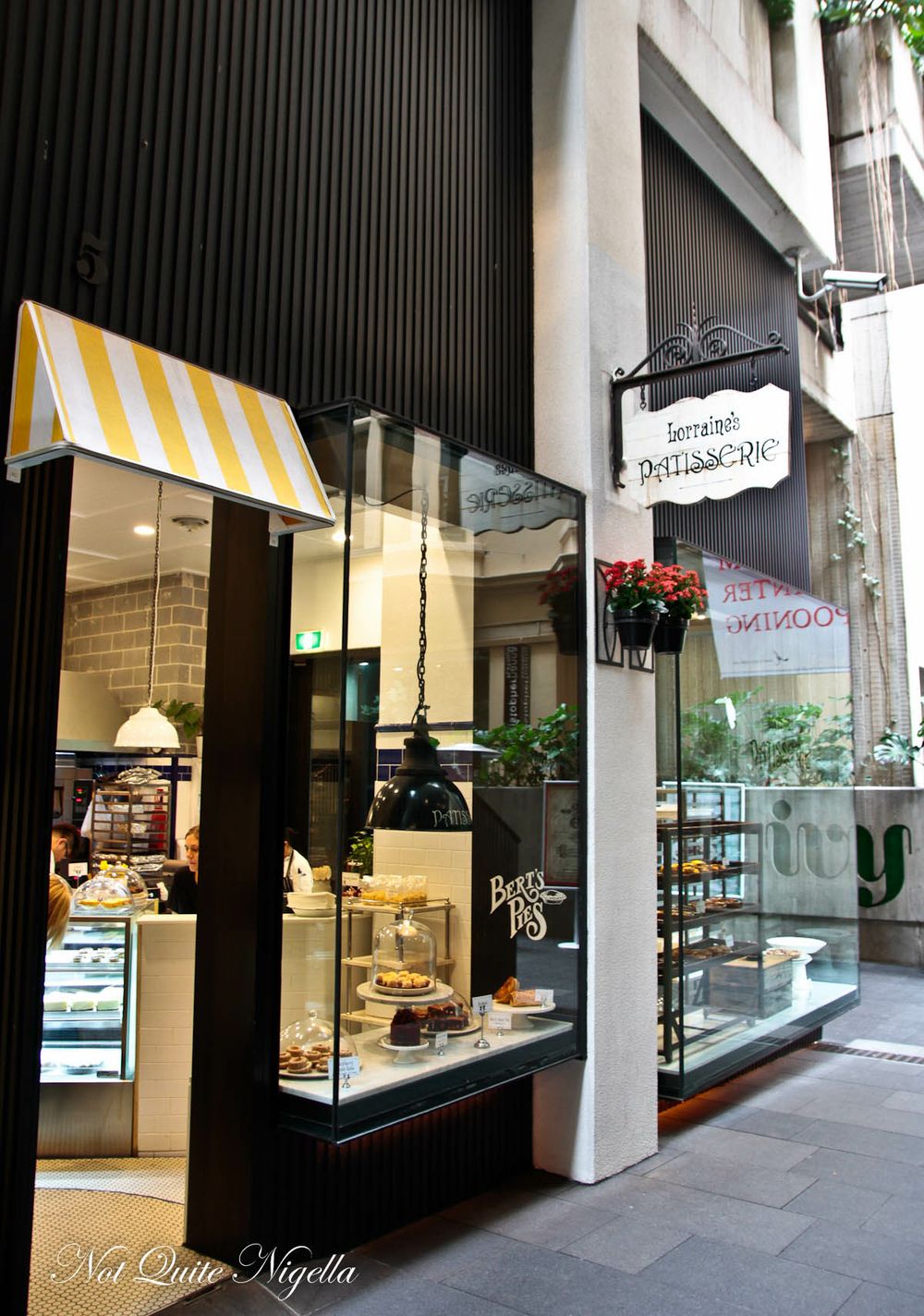 The woman in front of me turns to her companion and whispers excitedly "I know that there's barely enough room to swing a cat in but the pastries are heav-EN!" and he nods understanding. It's true, in this petite corner shop on Palings Lane, renowned pastry chef Lorraine Godsmark and her team studiously create pastries and sweet confections. Huddling in one corner are the audience or customers eager to buy a rich chocolate brownie, an individual rose bud topped cake or a little bag of toasted coconut marshmallows. I watch as a pastry chef wielding a blowtorch passing it over a slab of luscious mascarpone and strawberry cake giving it the kiss of heat to brûlée the top. 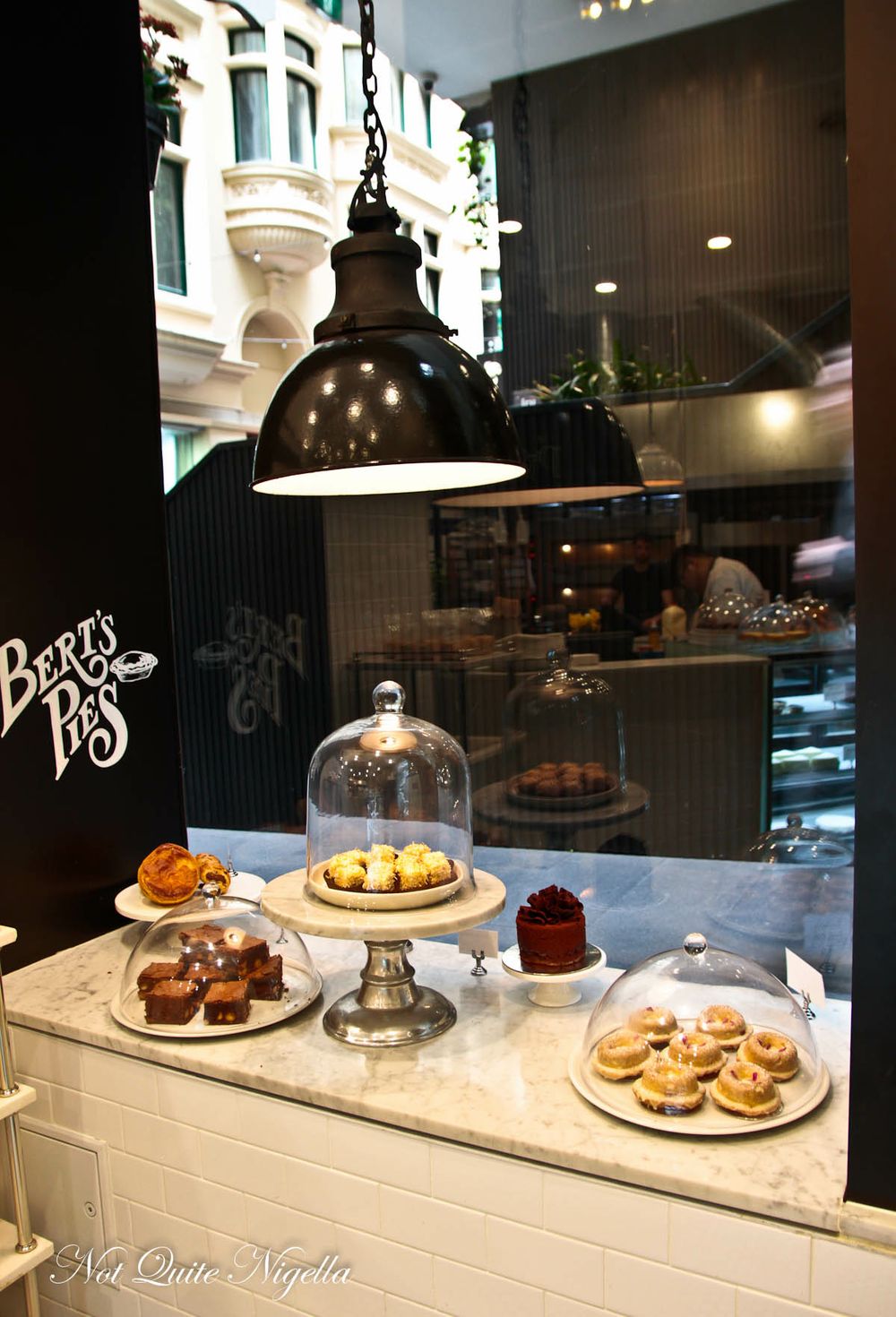 Lorraine Godsmark first got her start in the restaurant business when she and chef Neil Perry were working as restaurant waitstaff. Lorraine was originally a fashion buyer and working at the restaurant allowed her to save money for skiing holidays. Neil moved from floor to the kitchen and she decided to follow suit and it was at his Paddington restaurant Perry's that he noticed that she had a particular talent for pastry. When he moved to Blue Water Grill, the restaurant was so large that he needed a dedicated pastry section so he put her there. It was there that she developed her skills alongside him.

"I think my path was probably laid out for me as far as when I was a kid, my mother couldn't cook to save my life, she was useless! He (dad) was better than she was and used to make us little apple pies. But I use to muck around with cake mixes and would make those triple decker cakes with frosting out of a packet and having an older brother that used to devour everything was handy." 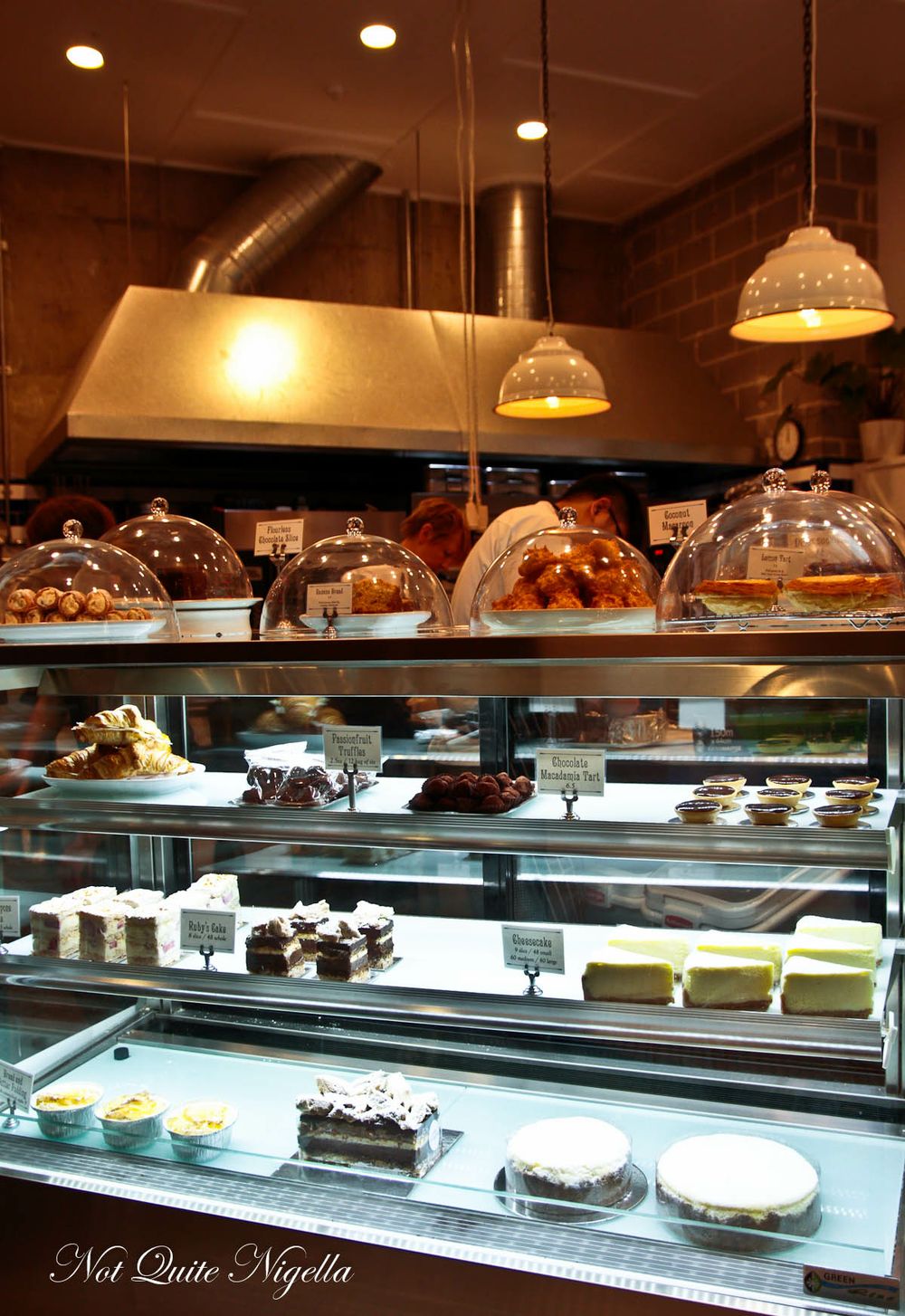 "I think he (Neil) probably noticed that I was meticulous and really accurate. When people are working you can watch the way that people treat food and how they approach things. Some people are too sloppy and slapdash and wouldn't make a great pastry chef. I find that when I come across a chef that wants to jump the fence, I really have to knock the chef out of them" she says laughing. "They're a bit heavy handed for my style of work." 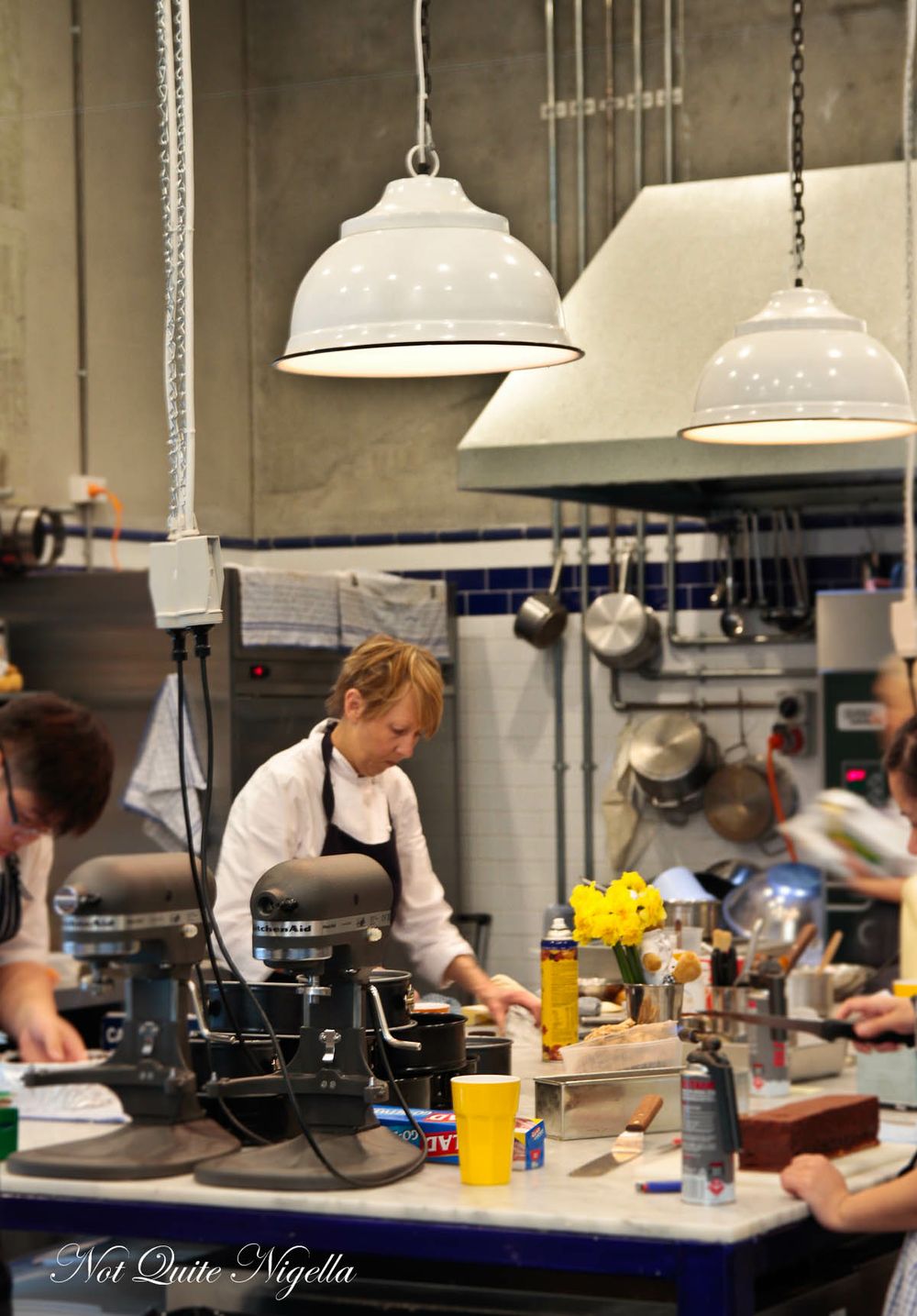 Lorraine Godsmark in the kitchen

It was working at Rockpool that also allowed her to hone her skills and palate and a signature of her desserts is their ethereal lightness. She knew that because her dessert course was to follow two other courses it needed to be light and not weigh diners down. "Neil also taught me about the importance acidity in food" including using fruit instead of dense, heavy ingredients in one note desserts. 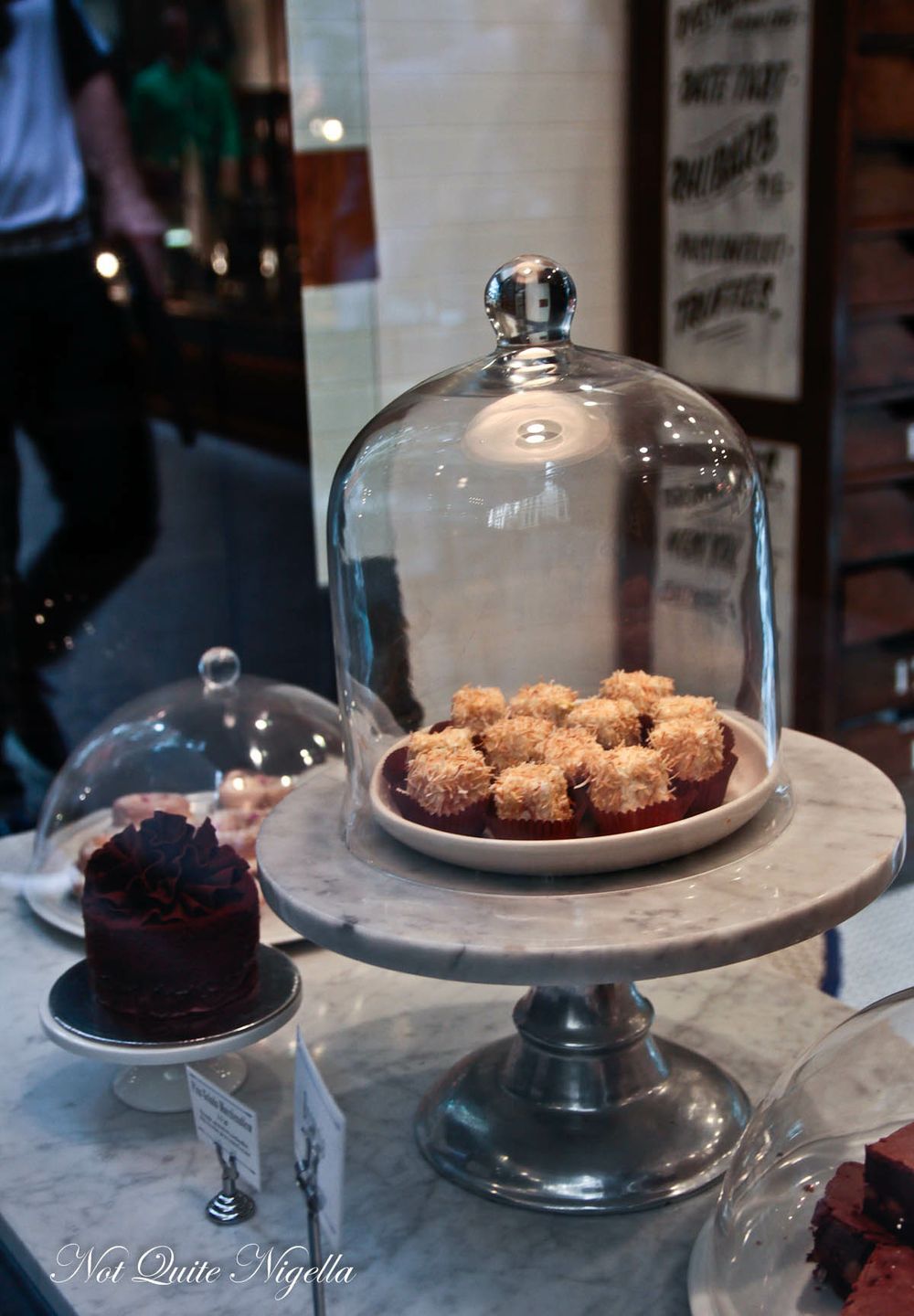 Lorraine explains that one needn't necessarily go overseas to learn about pastry. "There are magazines like 'So Good' from Spain which are dedicated to pastry chefs as well YouTube videos." She never gauges herself against anyone in Australia and looks overseas for a standard. She recently attended a class at Saveur in Melbourne with eclair maestro Christophe Adam and learned how to make paper light choux pastry. She show me one of the choux and the unfilled ball weighs no more than a few grams. 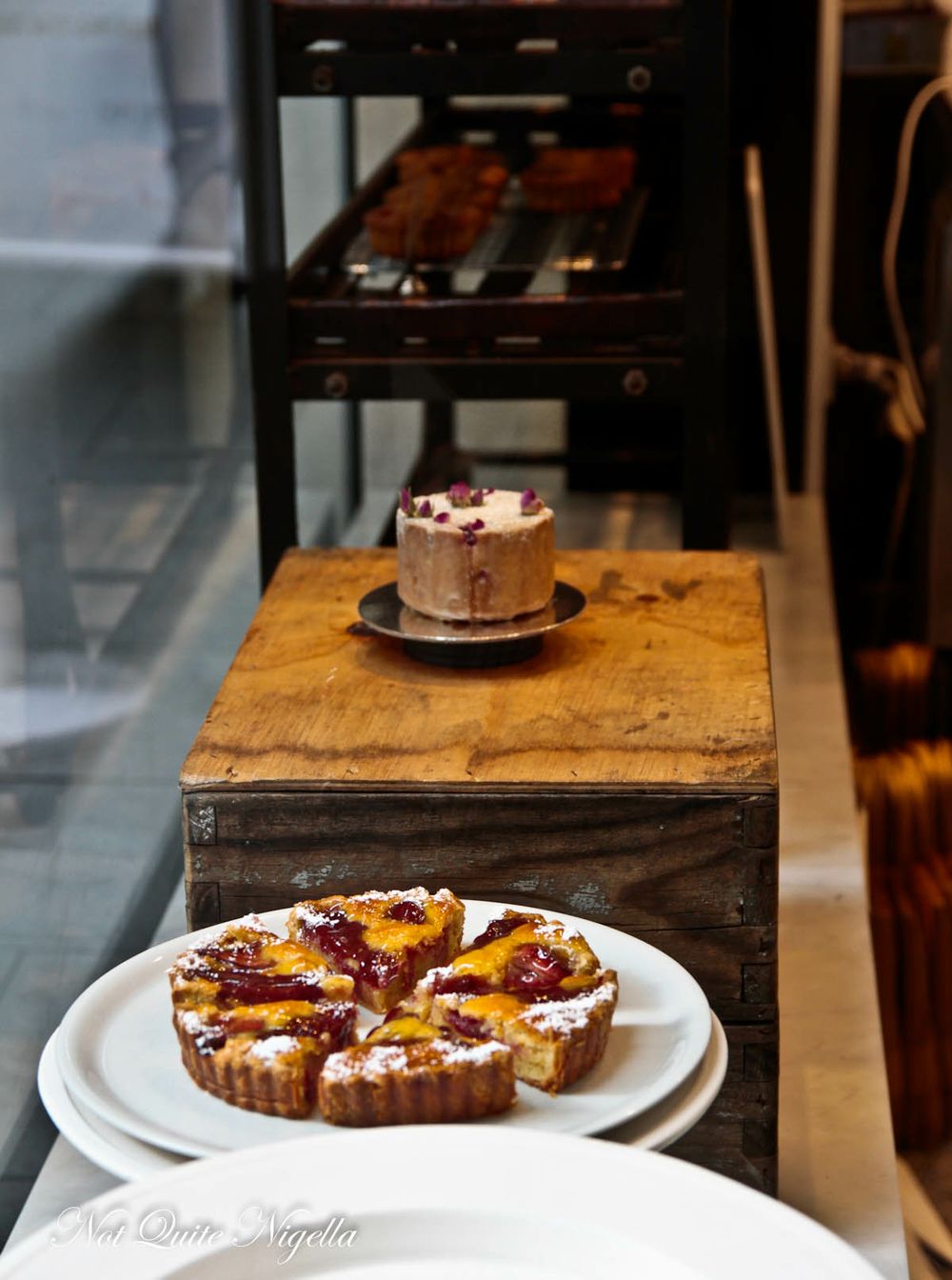 Currently, her biggest challenge is finding staff skilled enough to her exacting high standards. While many study at TAFE she laments that she still needs to show them basics like using a palette knife or filling a pastry case properly. "In countries like America, a degree with pastry costs about $40,000." As a result she finds that that tends to turn out committed, high standard chefs. "When you're paying that much you can demand that you have the best teachers." 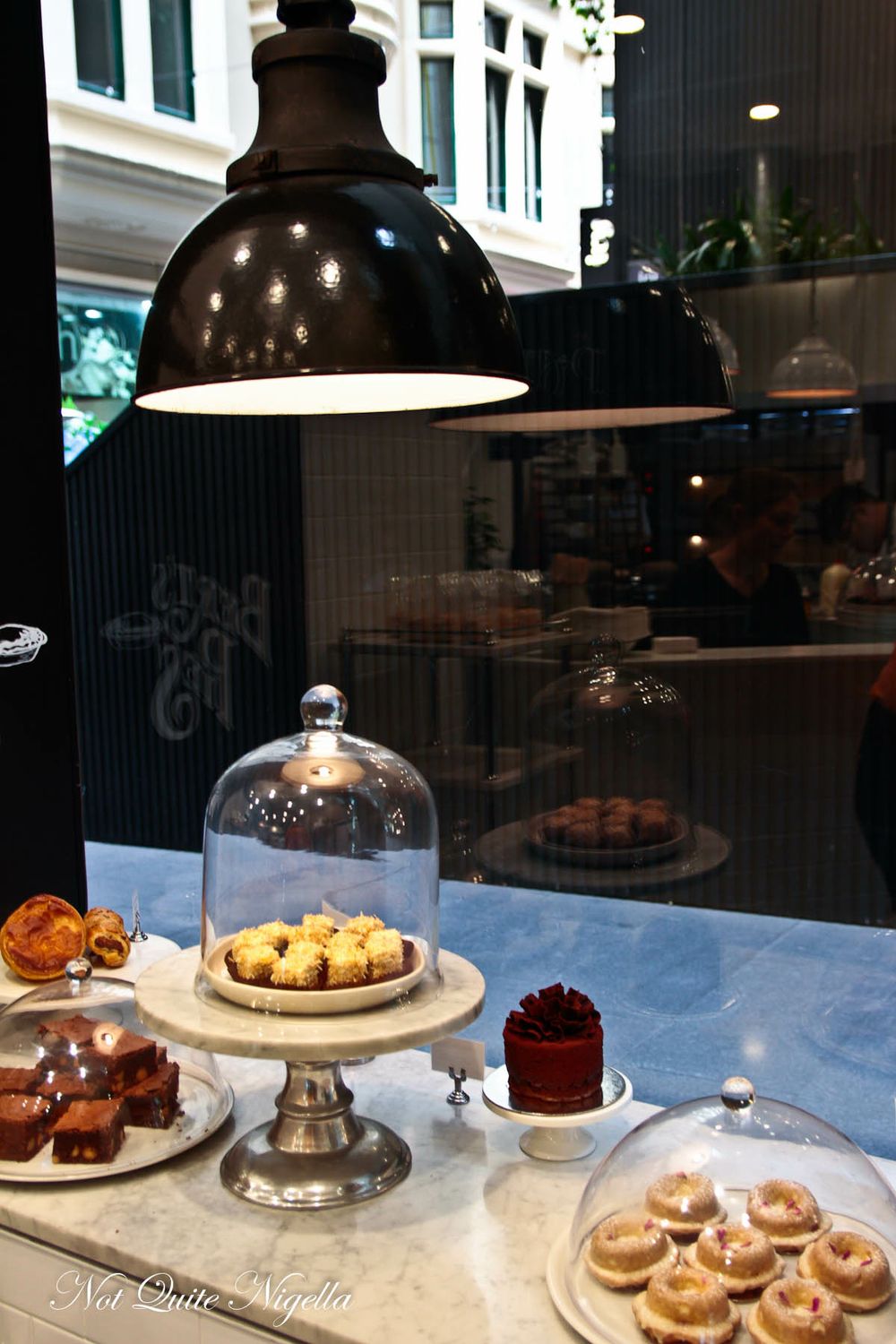 In its current form, the items on offer at Lorraine's Patisserie are the same as Yellow but September to December 2013 will see some of her newest creations. "At Yellow I always wanted to increase the variety of the repertoire but I was always handicapped by not having enough staff. I'm really hoping that with this store to realise the creativity that I've always wanted to do." But because many of her regulars have followed her here to the new location, there are some items that are so linked to her and her fans that she cannot take them off the menu. These are the mainstays like the mascarpone cake, chocolate flourless cake, cheesecake and date tart. The latter isn't available today as her right hand chef is away "The date tart is very time consuming to make. I'm the only one that makes it and when I make it I can only make two at a time and that's ten serves. It's not a dish that that you can mass produce." 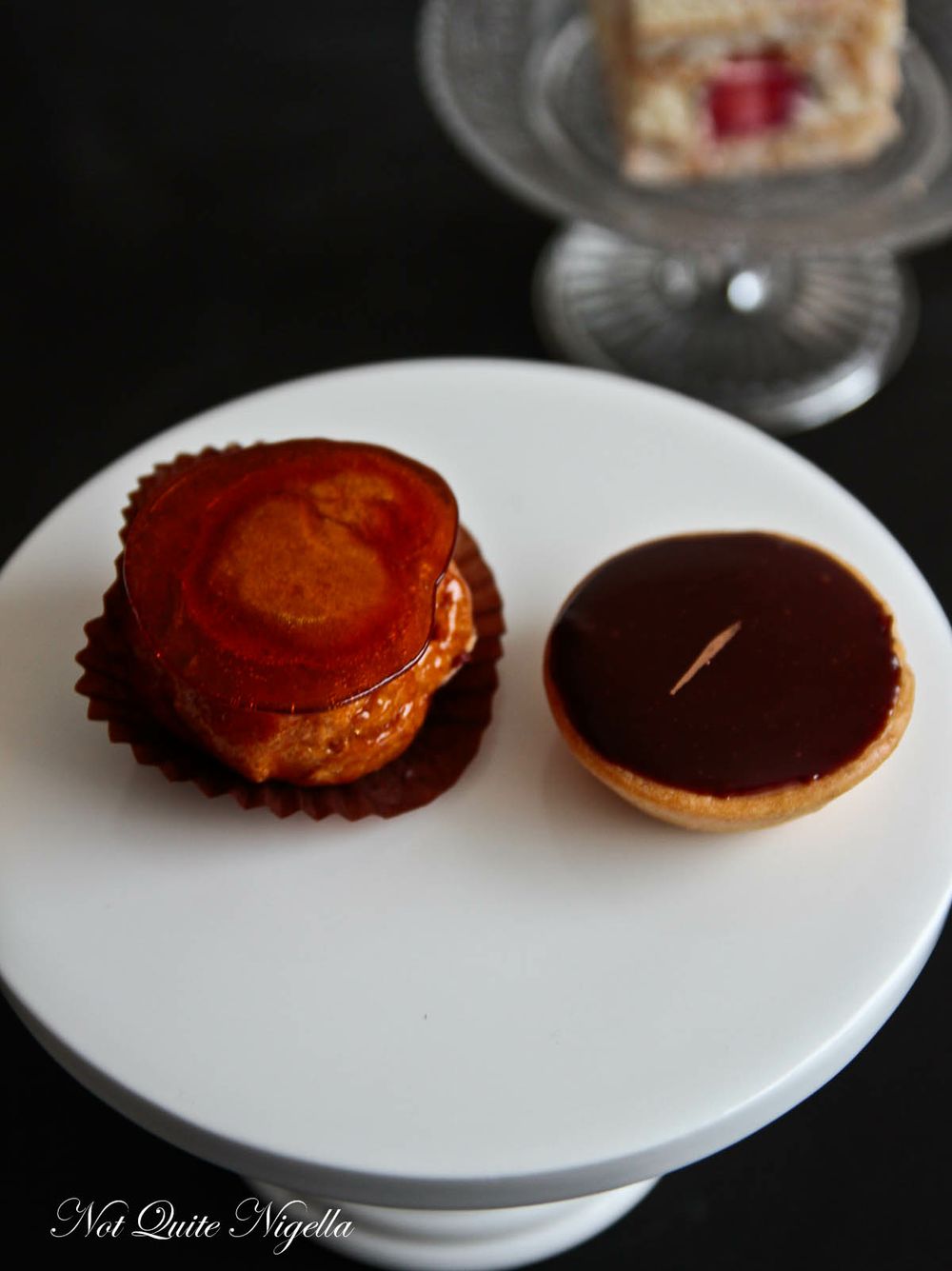 So what are the cakes like? I start with some of the smaller items including a toffee choux puff which is using the choux pastry that Lorraine just learned about. The pastry remains beautifully crisp, even with the voluptuously creamy vanilla rich creme patissiere filling. On top is a thin disc of toffee to add to the crunch. The chocolate and macadamia tarts are a mouthful of sweet goodness. A buttery short base is filled with gooey caramel, macadamias and a Valrhona chocolate ganache and gold leaf. The pastry is so buttery and short that it needs to be rolled between two layers of parchment. 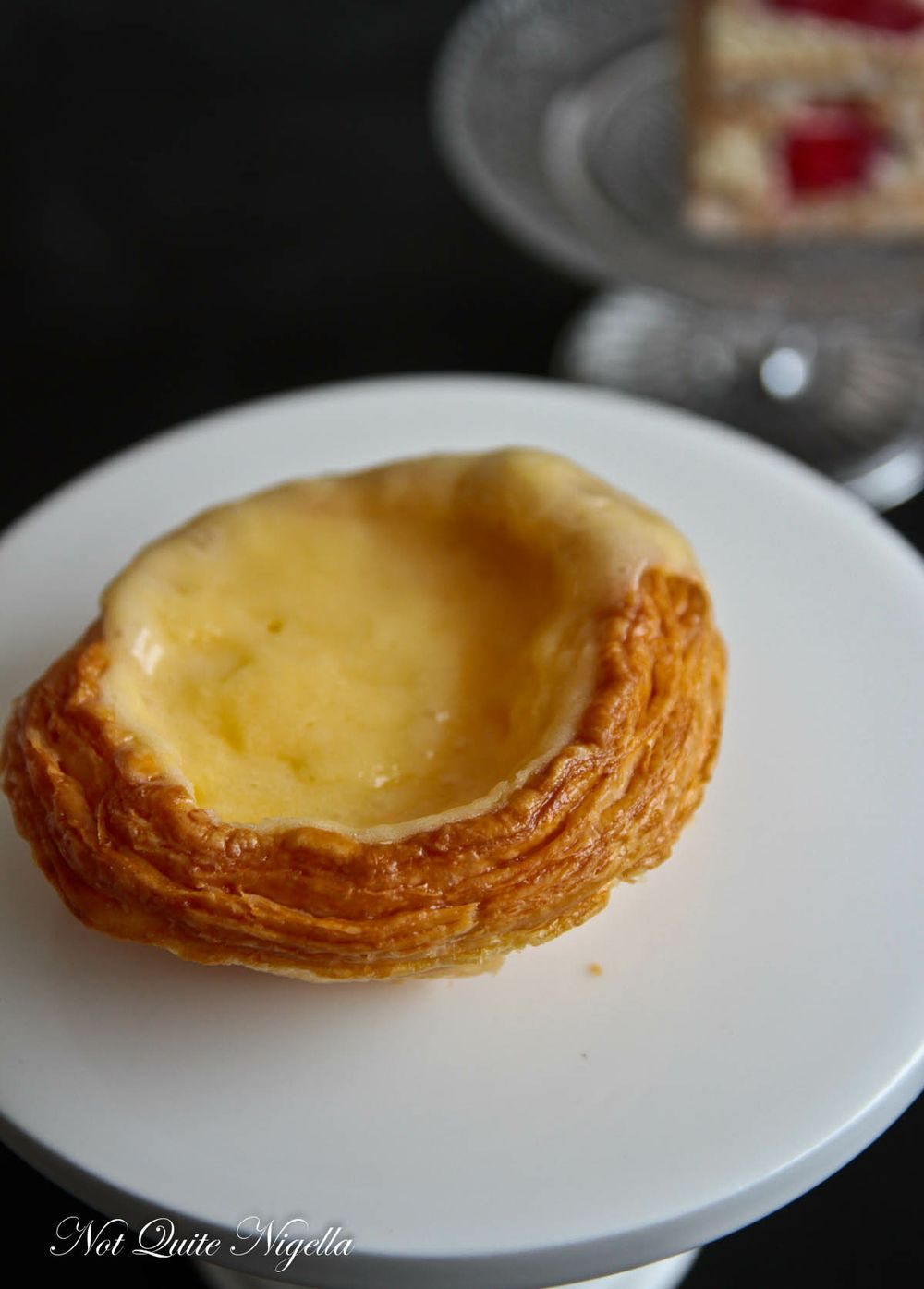 Lorraine tells me that the lemon tart was not a particularly popular item at Yellow but here it flies off the shelves. The lemon butter filling is smooth, liquid and tart and the multi layered puff pastry is so crisp, crunchy and buttery that you can hear each bite in your ears. 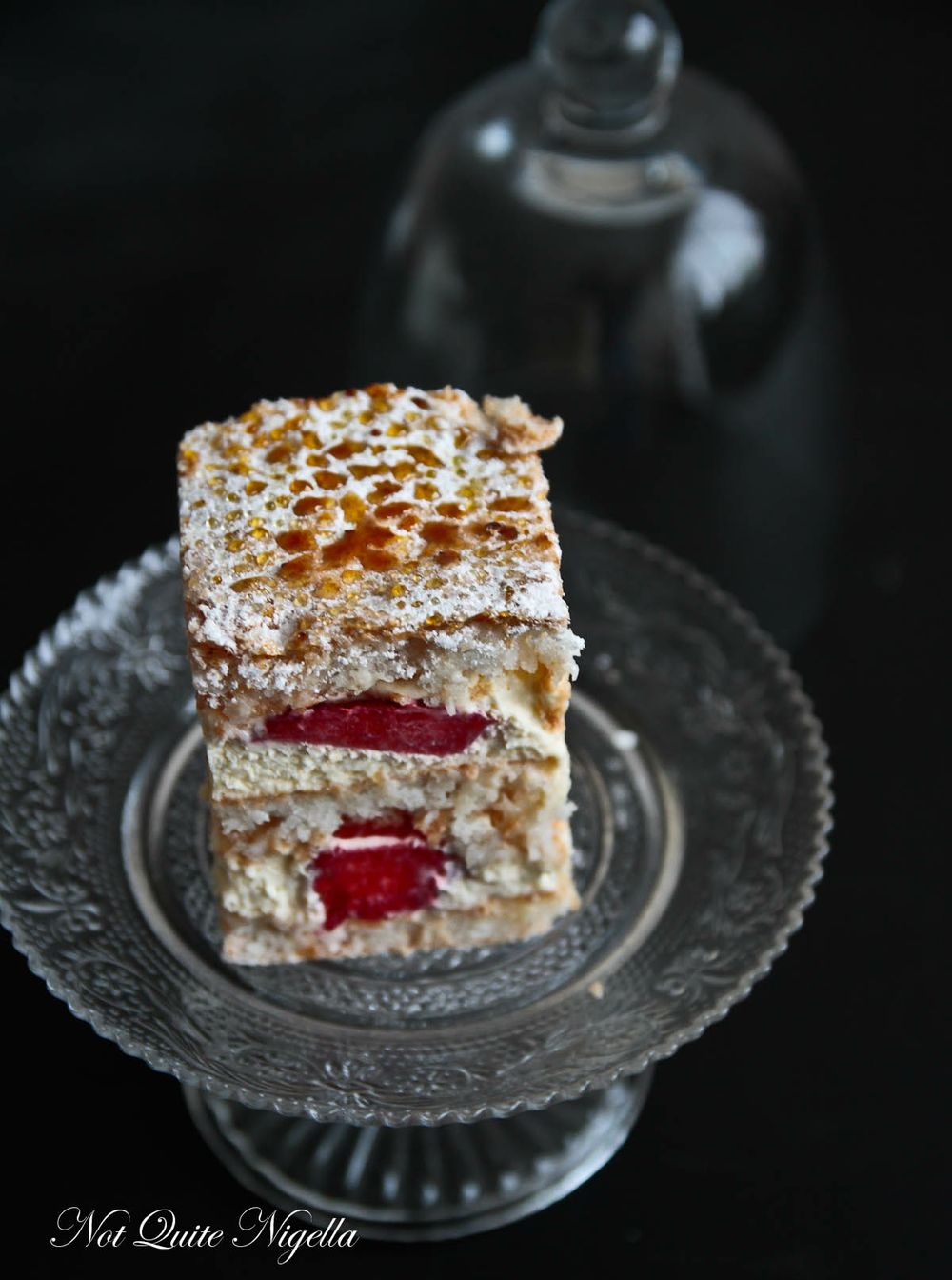 Which leads me to the mascarpone tart. It's a layered cake with three layers of coconut sponge, mascarpone and whipped cream and fresh strawberries. The top has a crispy brulee toffee texture from the blowtorch and it is so wonderfully light it disappears within a few bites without weighing you down. It's the contrast between the soft whipped mascarpone and cream, the coconut shreds and juicy strawberries that has them lining up in that little corner day after day. 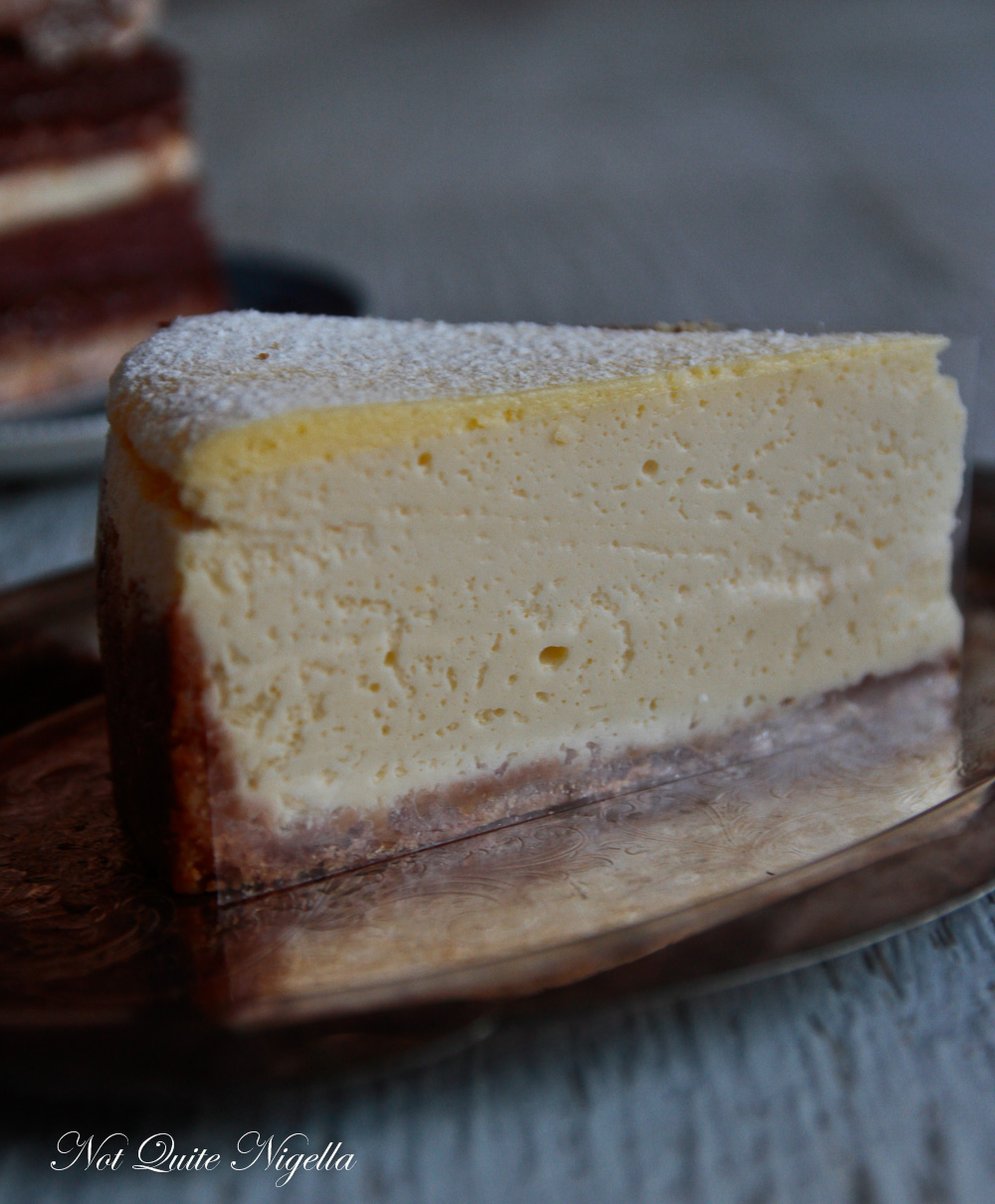 With the very best intentions, I meant to just try one forkful of the cheesecake. But as if possessed I go back for another and another forkful. The base is made up of a buttery gingernut style biscuit base while the cheesecake layer is so flyaway light and fluffy it feels like you're eating clouds-wonderfully cheesy clouds mind you... 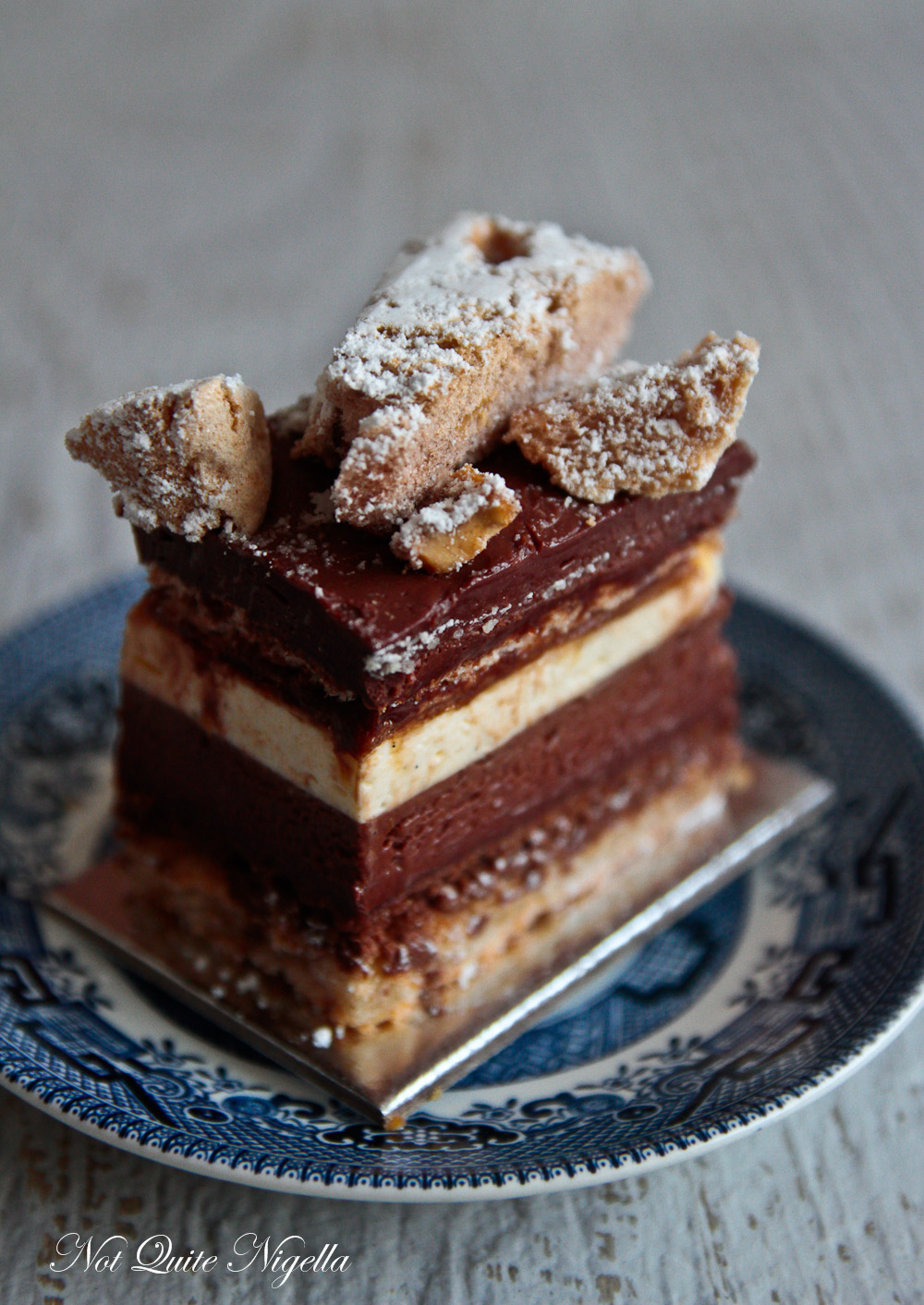 This chocolate cake is named after Lorraine's former business partner's daughter Ruby who is apparently Lorraine's youngest and number 1 fan. It was created for her birthday and was so popular that it remains on the menu. It is a layered chocolate cake with a nutty hazelnut dacquoise base, layers of chocolate orange ganache and vanilla topped with fluffy light cinnamon meringue.

Does she eat sweets herself? "Yes...I will always have a look at the dessert menu first and will always try desert. I will forego an entree so that I can fit in dessert. I eat chocolate every day" she says. How much? "I'd hate to think!" she laughs, "I could eat a whole tub of ice cream" she adds.

So tell me Dear Reader, do you eat sweets or chocolate every day? And have you always order dessert? Have you ever forgone a savoury course to fit in a sweet? 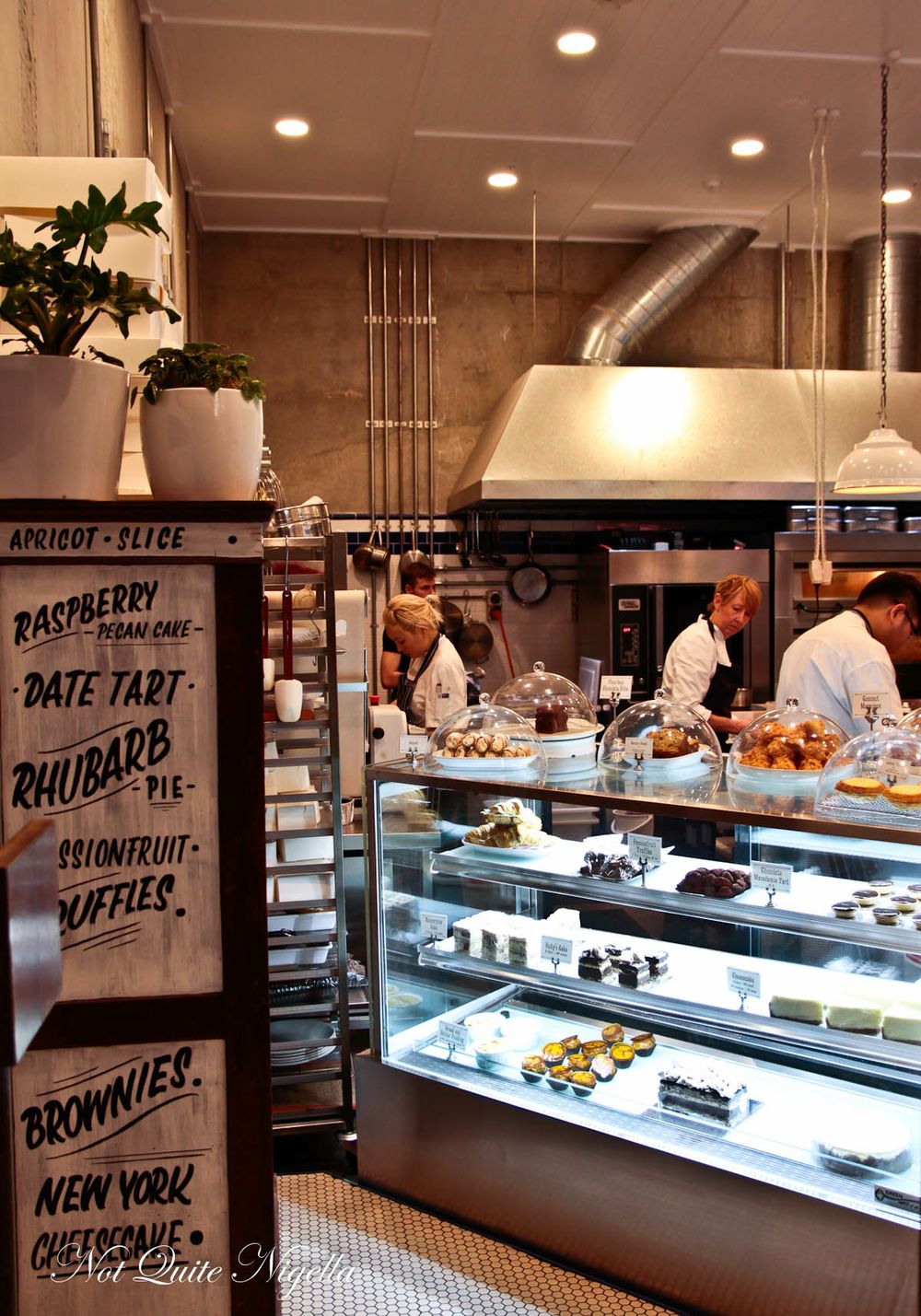 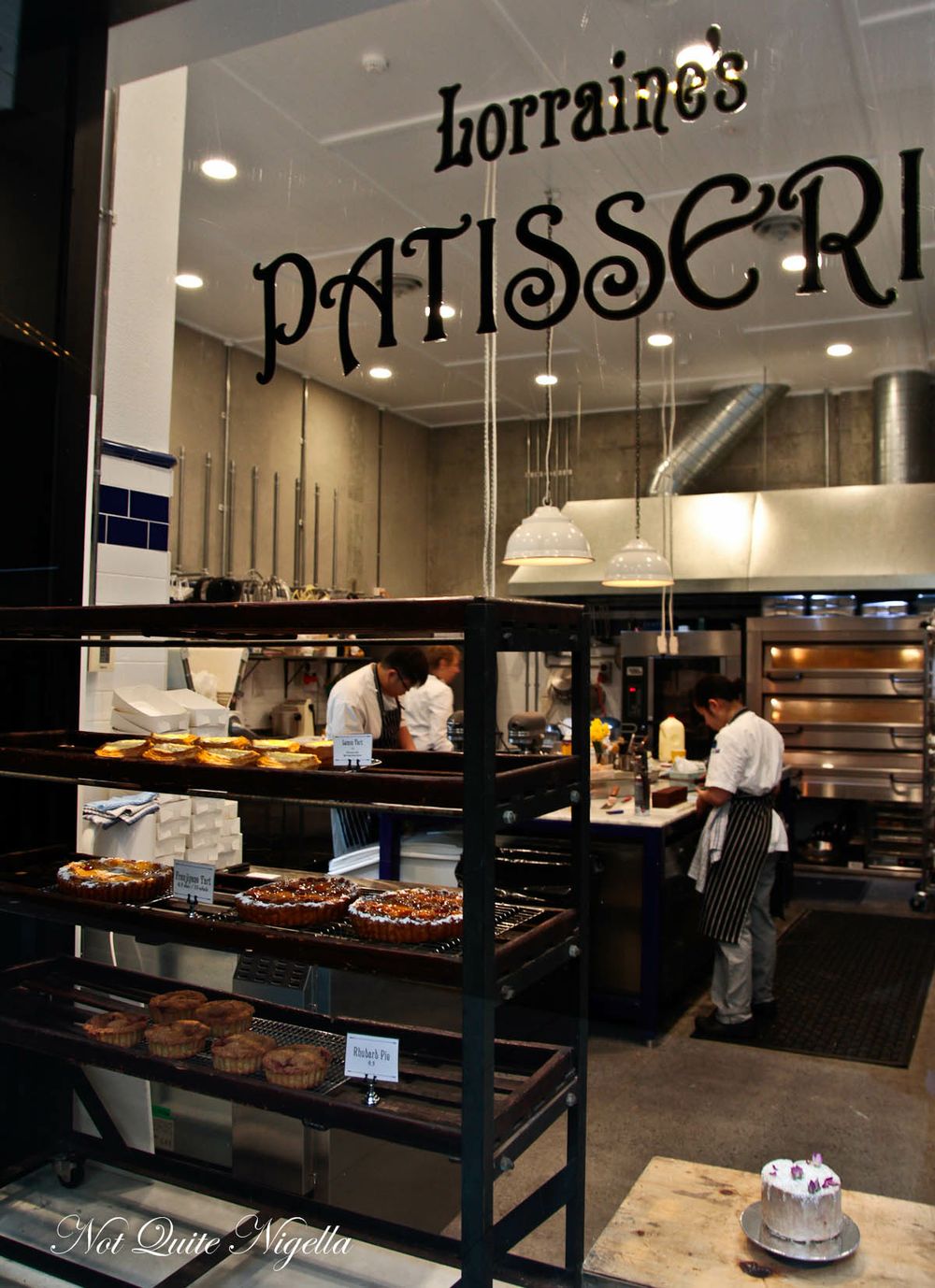