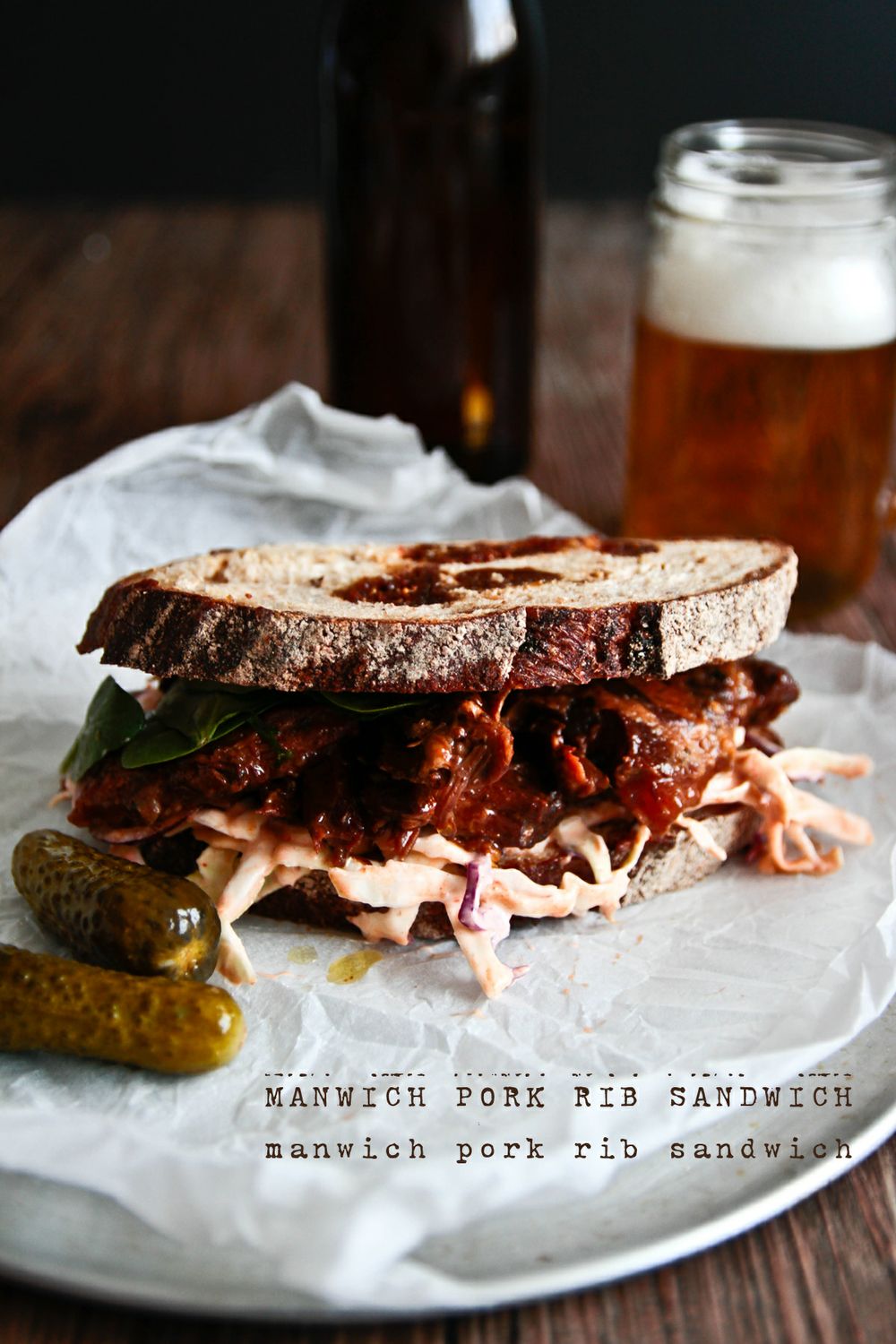 Many people assume that dieting is the primary domain of women, marketing tells us this in no uncertain terms and it seems like the endless tussle of losing and gaining weight seems the be the issue for most of my female friends rather than my male. It could be because men generally lose weight easier than women and it's one of those enviable things that they have along with waking up looking exactly the same as when they go to sleep. I was talking to a writer recently - he was very tall and lean, he told me that he was on a 5:2 diet which involves 5 days or regular eating and 2 non consecutive days of 600 calorie eating.  He and his wife have been on this diet and maddeningly, he has been losing a lot of weight while her weight loss was more modest.

We recently had a "manwich" at a takeaway store and the concept of it was that there was double the meat and half the salad which Mr NQN didn't like. He raised his eyebrow at it being marketed as a Manwich because he actually liked the idea of the opposite which really said to him that it wasn't really manly. I sort of joke when I call this a Manwich because it's really for both genders-it's not one for weight loss, the fact that it's a sandwich filled with slow cooker pork ribs means that the sandwich itself is a melting combination of boneless, tender, saucy pork ribs, a kimchi spicy coleslaw and salad. That's double the amount of salad but still manly nevertheless. 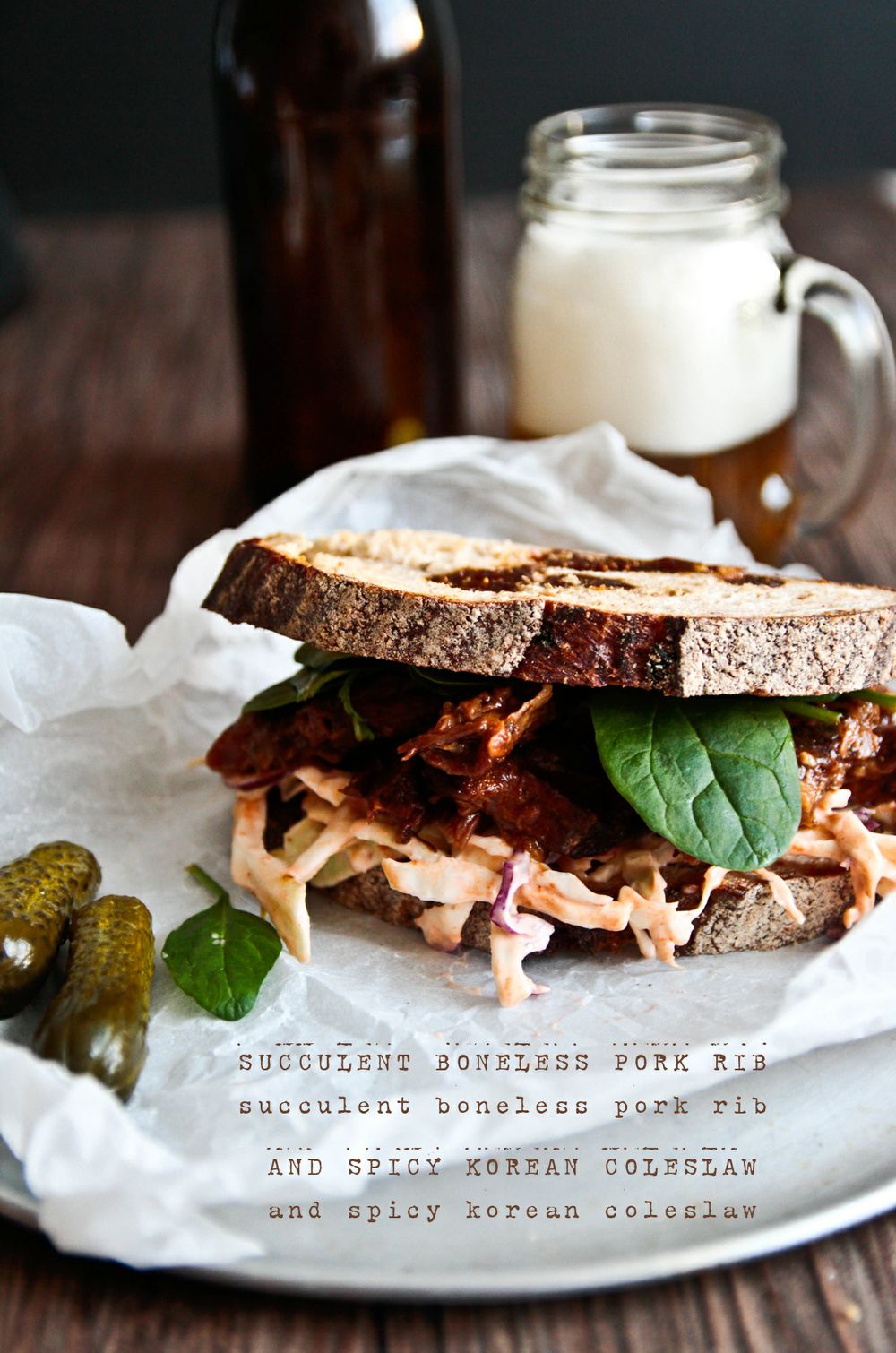 I got Mr NQN to unroll his sleeves for this one. He used a rib recipe that was sent to us by Mark, a food loving P.R. account manager in Brisbane. His quantities were descriptive if not particularly specific (i.e. "A mountain of pork ribs, a river of BBQ sauce and all the Cajun spice in Louisiana") so we improvised and made these in the slow cooker. I kept Mark's instructions as I thought that they were quite funny and in keeping with the "manwich" theme. The slow cooker does all the work and we left it on overnight to wake up the next day to the perfect lunchtime sandwich. The soft rib meat was unctuous and the creamy spicy coleslaw gave the meat a jolt of spice and crunch. And Mr NQN added extra salad to his!

So tell me Dear Reader, would you add extra meat or extra salad? And do you think that men lose weight easier than women? 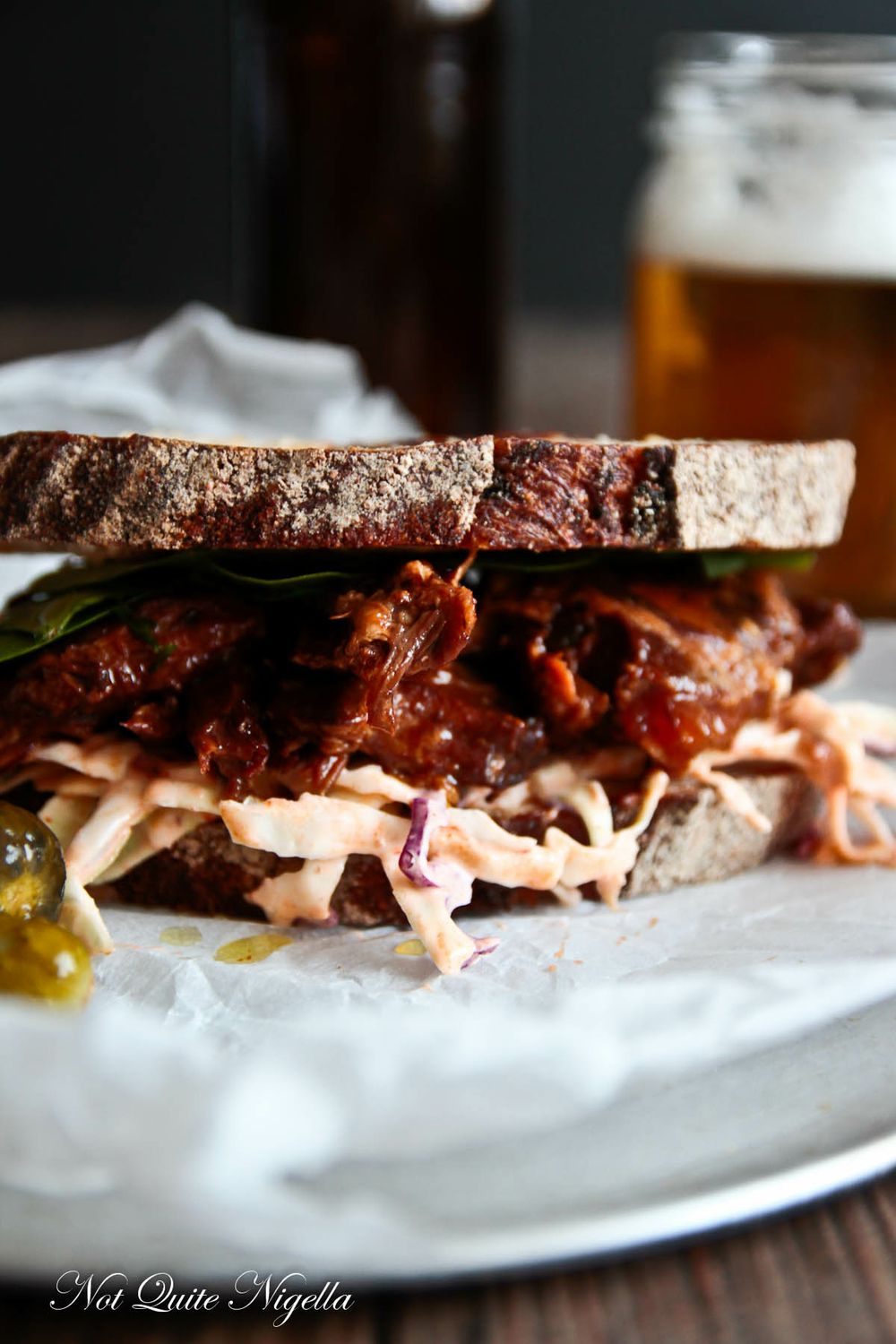 The Manwich - A Pork Rib Sandwich 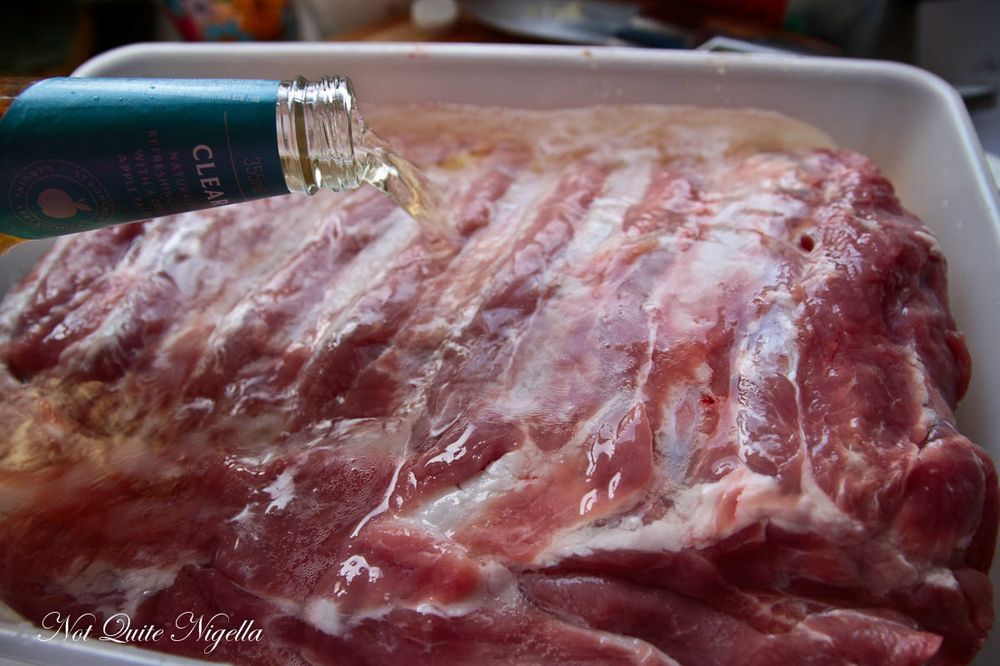 Step 1 - This process takes a while so put on some awesome relaxing music :)

Step 2 - Sink the ribs in cider to soak while the rest of the prep is in progress.

Step 3 - Mix in a bowl the BBQ sauce, mixed herbs and a table spoon of cajun spice. Stir this mixture and add in a quarter of a stubby of cider. 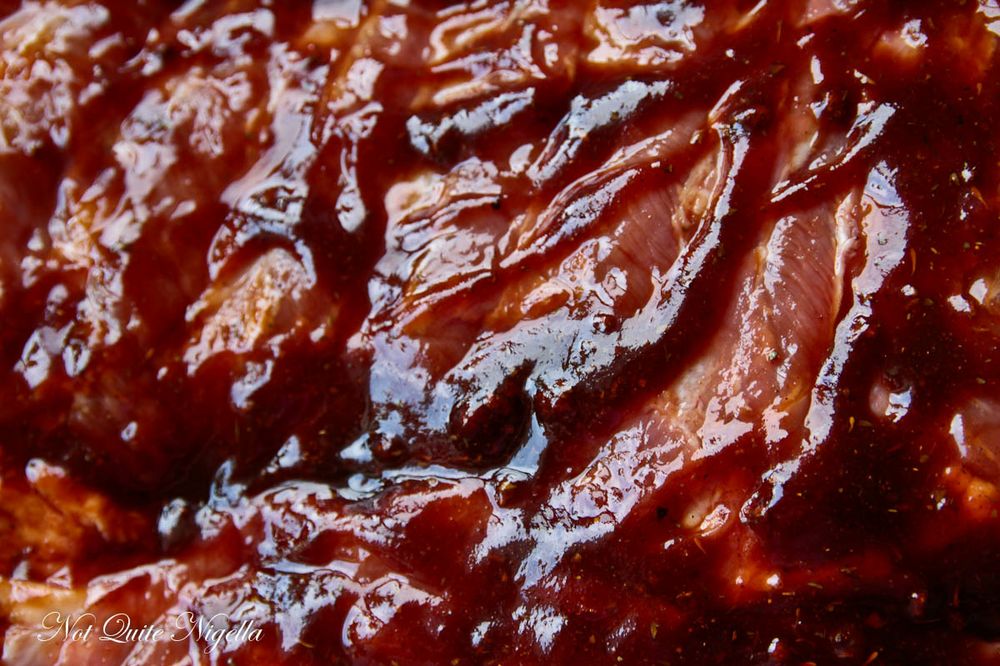 Step 4 - Once the ribs have been soaking for a while (usually an hour or so) remove them and massage the cajun spice into the ribs so that they get a nice orange tan on them.

Step 5 - Once the ribs have been massaged, put them in a sealable container that can be refrigerated.

Step 6 - With the sauce in the mixing bowl, start to mix in a bit of cider from the rib soaking, usually about two cup.

Step 7 - Pour the sauce over the ribs and then place in the fridge for about 6 - 10 hours.

Step 8 - Place all the contains in a slow cooker and put it on high for about 5 hours, then onto low for 2 - 3 hours. 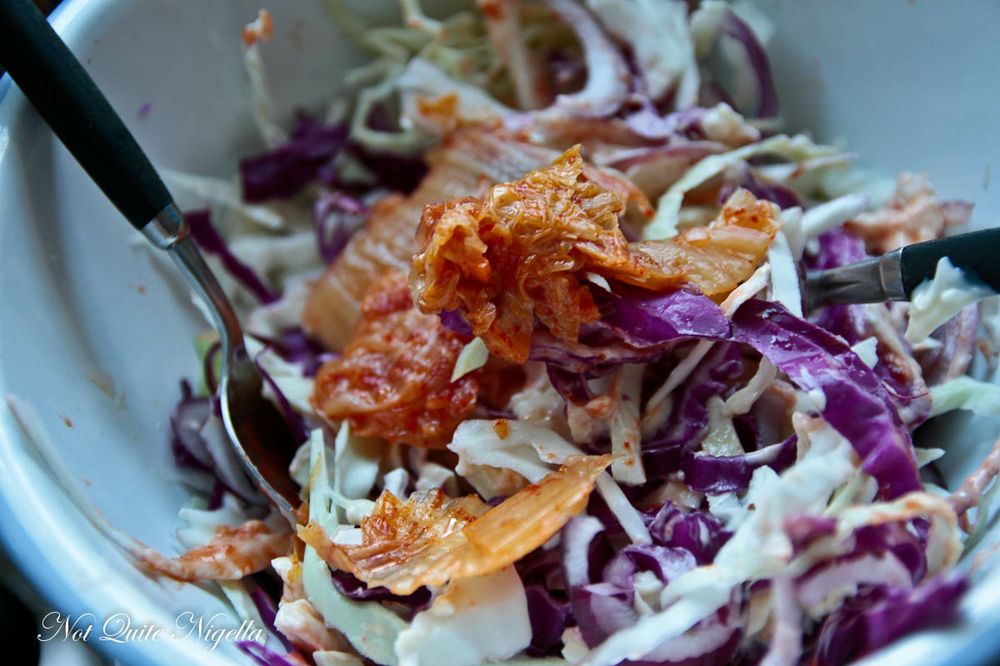 Step 1 - Finely shred the cabbages and finely slice the onion and toss in a large bowl along with the kim chi. Mix the mayonnaise and the ssamjang or the Sriracha and the drizzle over the salad and toss. Add salt and pepper if needed.

Step 2 - Slice the bread and place spinach leaves on bottom and then a layer of coleslaw. Lastly, add the warm boneless pork rib pieces and eat! 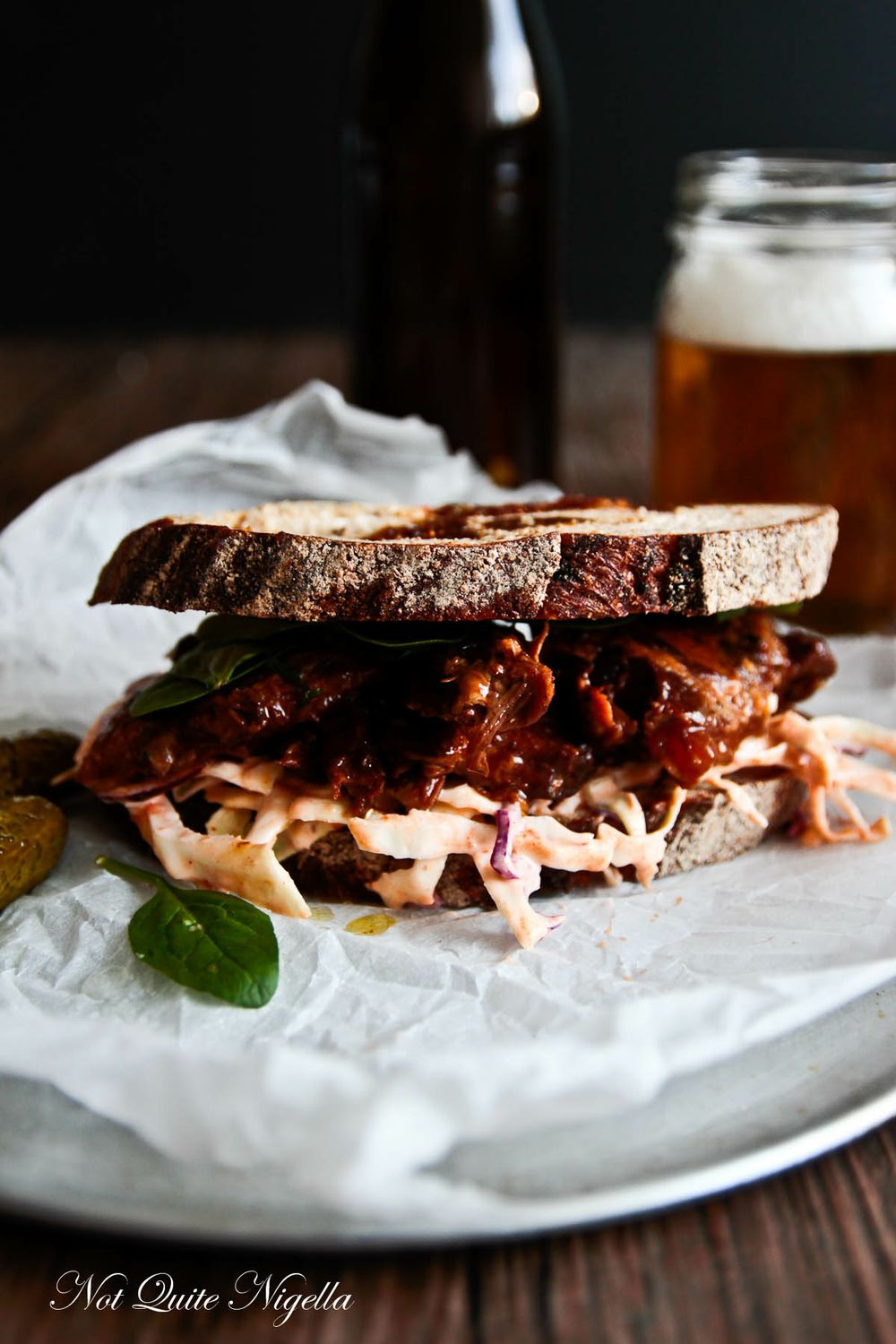