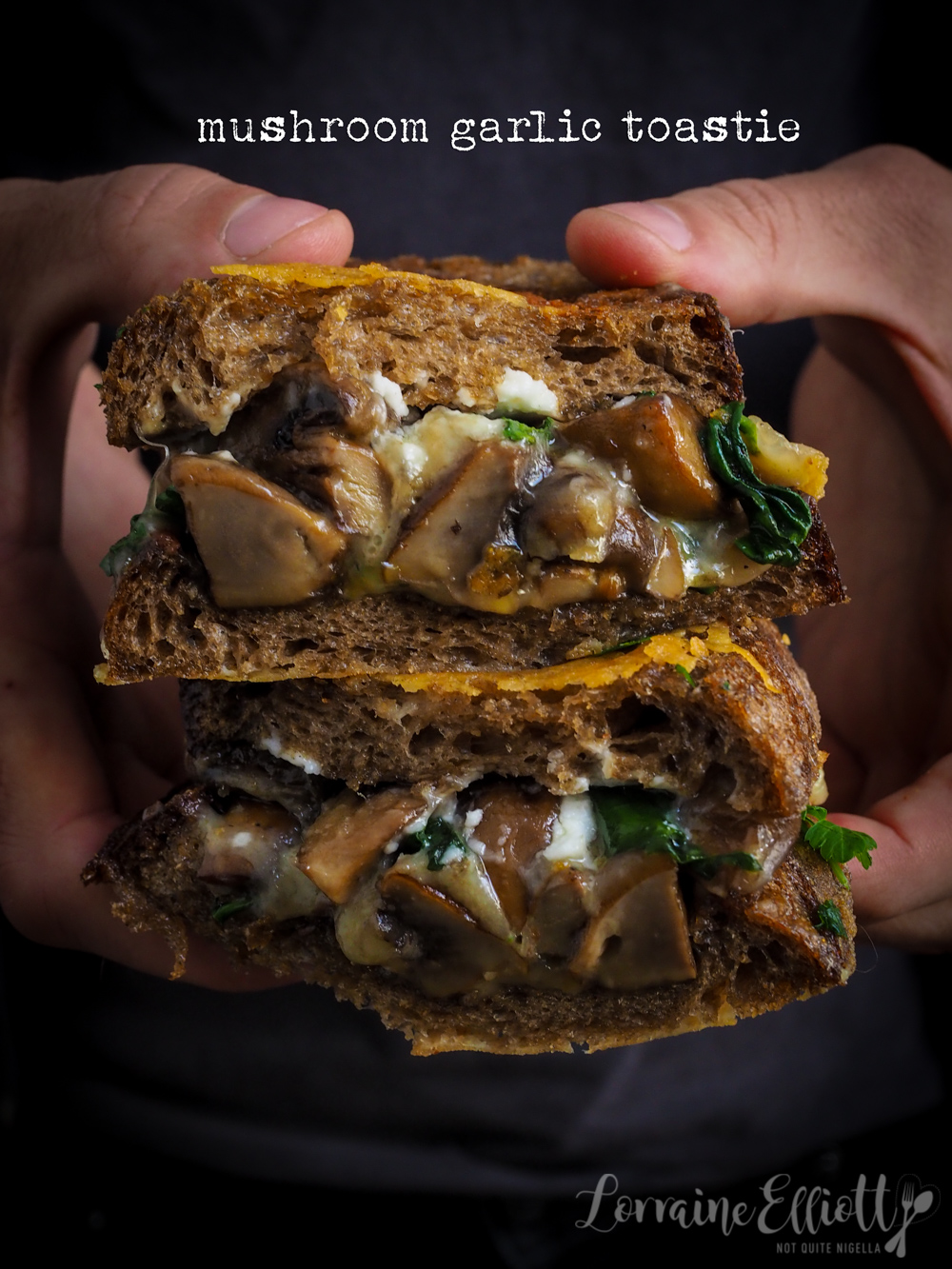 This mushroom garlic toastie has been Mr NQN's the most requested lunch for the past few weeks. To make this mushroom toasted sandwich we roast the mushrooms in some olive oil to make them super juicy and fill some toasted sourdough with the mushrooms and three cheeses. To give it that extra flavour and crunch we spread it with garlic dip and add a parmesan crust on the outside! This is a pushy recipe Dear Reader!

Mushrooms are inexpensive and in season at the moment. Mr NQN loves this so much that I buy 1 (or 2!) 500g/1.1lb boxes of mushrooms each week to make this. To make this easier I make a big batch of the roasted mushrooms and then I have enough mushroom filling for a week. I have even been known to make a batch of these sandwiches and then reheat them on the day if I don't have a lot of time to make his lunch.

Please don't be put off by the amount of cooking time required. The reason why it is so long is because I roast them because I don't have the patience to stand in front of a stovetop and fry them. Roasting them in the oven this way means that you can do a big lot of them at one time. I usually start the mushrooms in the morning before I work out and then by the time that I'm done, so are the mushrooms and then I make lunch.

1 -I don't want the garlic getting burnt in the oven so I add garlic via garlic dip or tourm. You can buy garlic dip at the supermarket but did you know that it is the most delicious and easy to make dip that takes less than 5 minutes! Make a batch and use it on fish, chicken, lamb or beef. It's amazingly delicious and fluffy! My garlic dip recipe link is here and below. 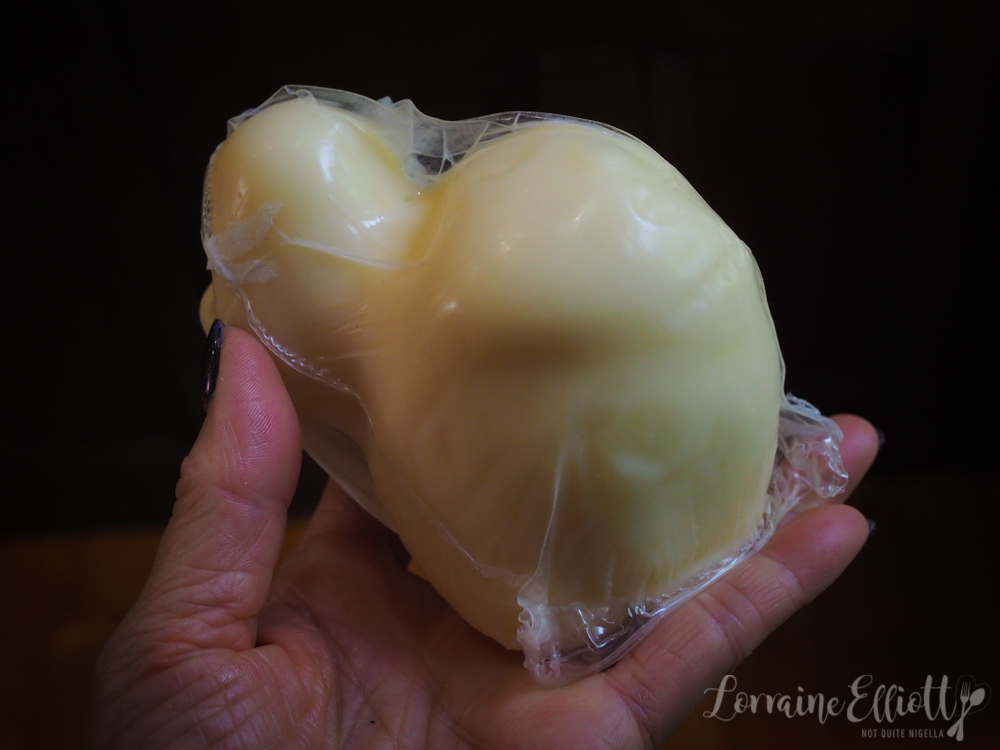 2-I used scarmoza bianca cheese which is like a dryer version of mozzarella ideal for melting and in sandwiches. You can use shredded tasty or cheddar too if you don't have scarmoza because it can be hard to get. I like using stronger flavoured cheeses like tasty cheddar and parmesan on vegetarian sandwiches just to boost the umami/savoury flavour.

3-Spread butter and press in some grated parmesan onto the outside of the toastie and then fry. This gives the sandwich such a nice crispy crunchiness!

4-I prefer to melt the cheeses with the mushrooms in a frypan because I find that sometimes the outside of the bread toasts but the cheese isn't fully melted in the centre. If you have a panini press (I don't) this isn't such an issue but it can be a problem doing it in a frypan.

5-I love mushrooms that are quartered rather than thinly sliced. It's less effort but also gives a really nice, meaty texture too. 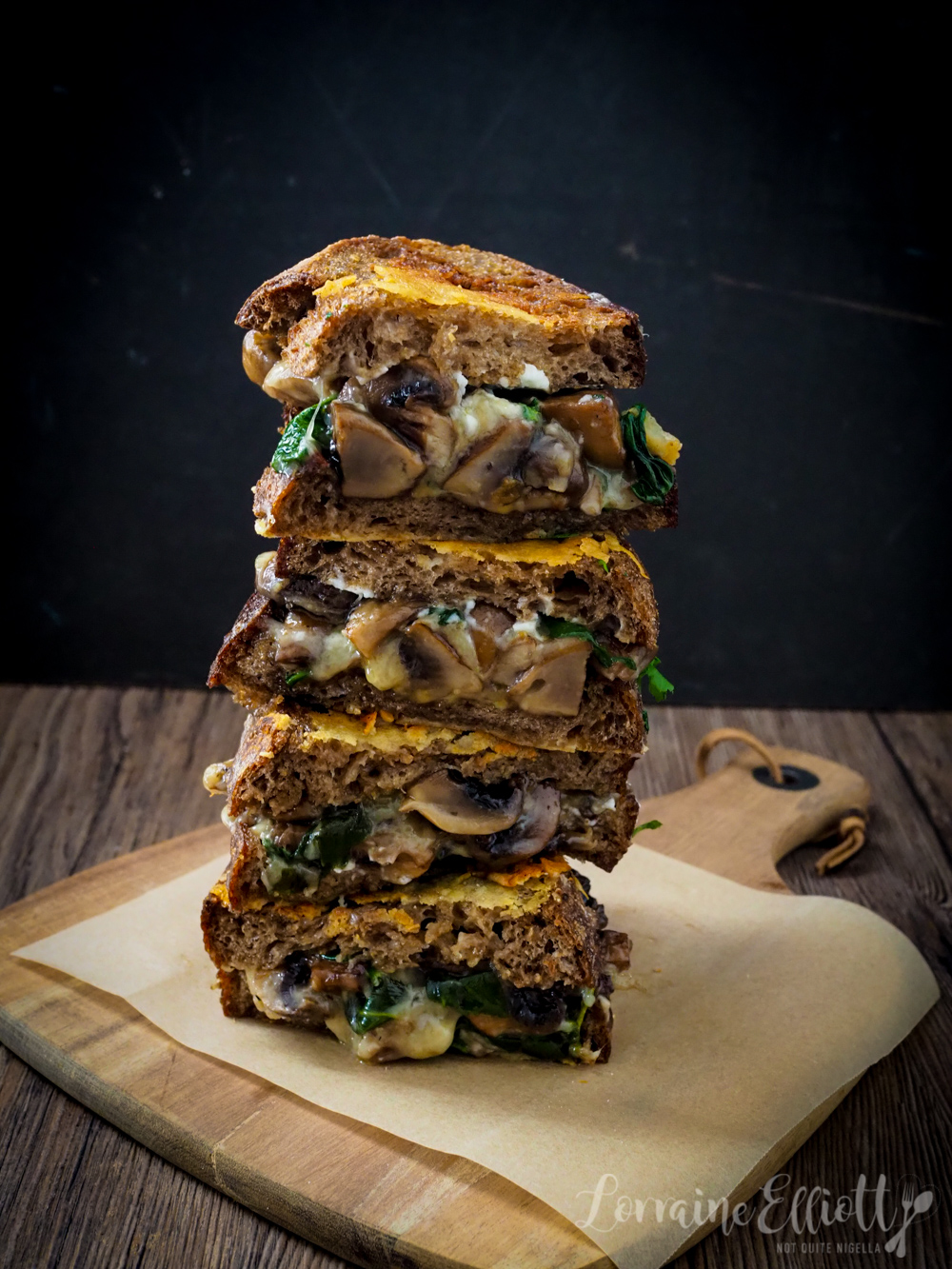 I'm one of those people that will always order the mushroom toastie at a cafe and I've had some really great ones. The mushroom toastie melt at Room 10 in Potts Point stands out as a favourite. But sometimes you don't want to have to venture out and battle for a table, you just want something delicious and you want to eat it in your robe at home. And sometimes there are times when you wish you had just stayed at home/

We went to visit a dining precinct recently. There was one restaurant that was the busiest restaurant there with a huge line of people trying to get a table there. We put our name down and they told us that it would be around 30-40 minutes wait so we went to a nearby shop to order some bubble tea. My phone rang about 10 minutes later and amazingly they had a table for us. We sat down and ordered and then sat back and waited for our food.

Around the 25 minute mark I started to get restless and after visiting the restroom, playing on the phone and talking to Mr NQN I started looking around. I saw our waitress drag a grimy, filthy garbage bin to a table to collect dishes and to presumably throw table scraps away. I swallowed, thinking that perhaps my seat might have had a grime streaked garbage bin on it too at some stage.

After 35 minutes the table next to us who had sat down 10 minutes after we had started to receive their food. When we asked the waitress she said that she would be back in a second. She came rushing back a minute later carrying a plate of food. I could see that the curry had a skin formed over it and was cold. The beef chunks on top were enormous and dry while the pork dish had crispy skin but the meat was dry as a bone.

"Do you want share plates?" she asked and we said yes. She only gave me one although she was carrying two and we had to flag her down to get Mr NQN one. When we tried the food it was pretty terrible. While the flavour was there the meat was a terrible combination of dry, cold and congealed that I wish we had just stayed at home. And eaten a mushroom melt wearing a robe!

So tell me Dear Reader, do you ever order the mushroom toastie? And how often do you eat out and have a terrible experience? 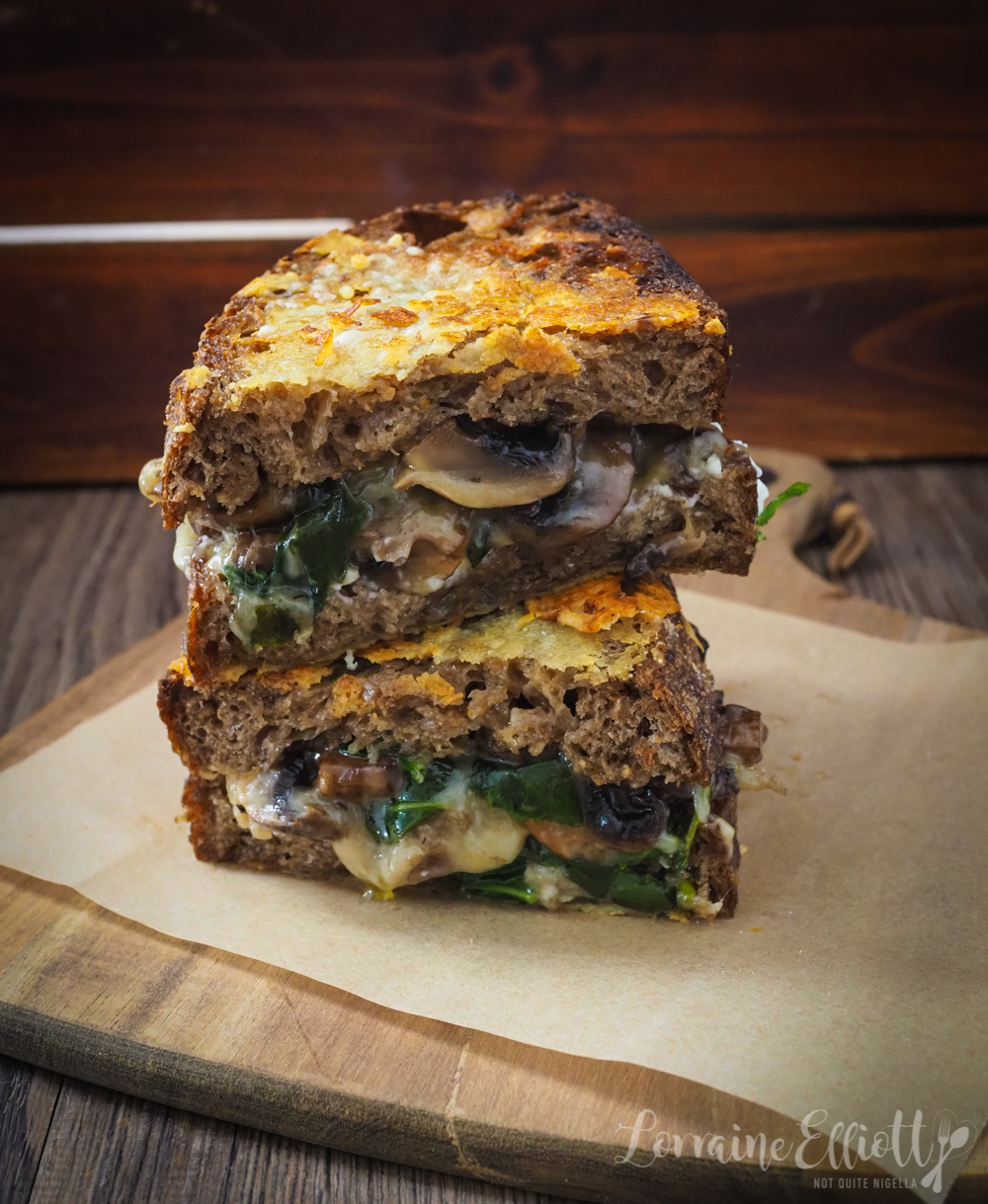 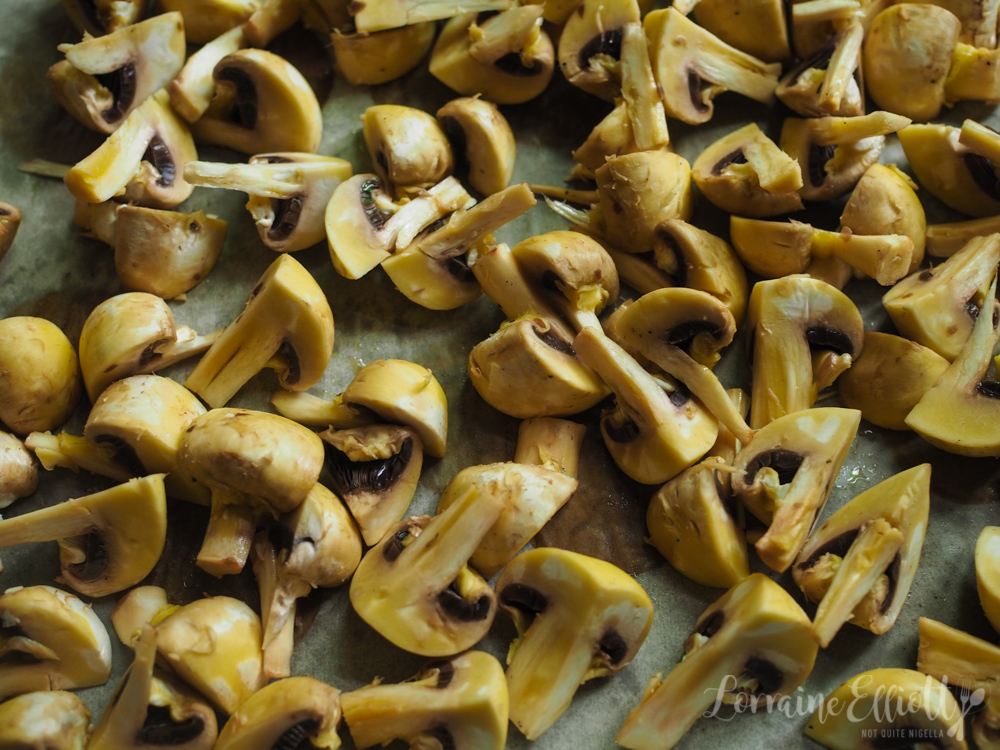 Step 1 - First roast the mushrooms. Preheat oven to 200C/400F and line a large baking tray with parchment. Quarter or sixth the mushrooms (most of mine were quartered but a few were bigger so I cut them into sixths). Toss in the oil and spread out on the baking sheet and roast for 35-40 minutes. I like it when they're a little crispy on the edges so sometimes I roast them for a bit longer. 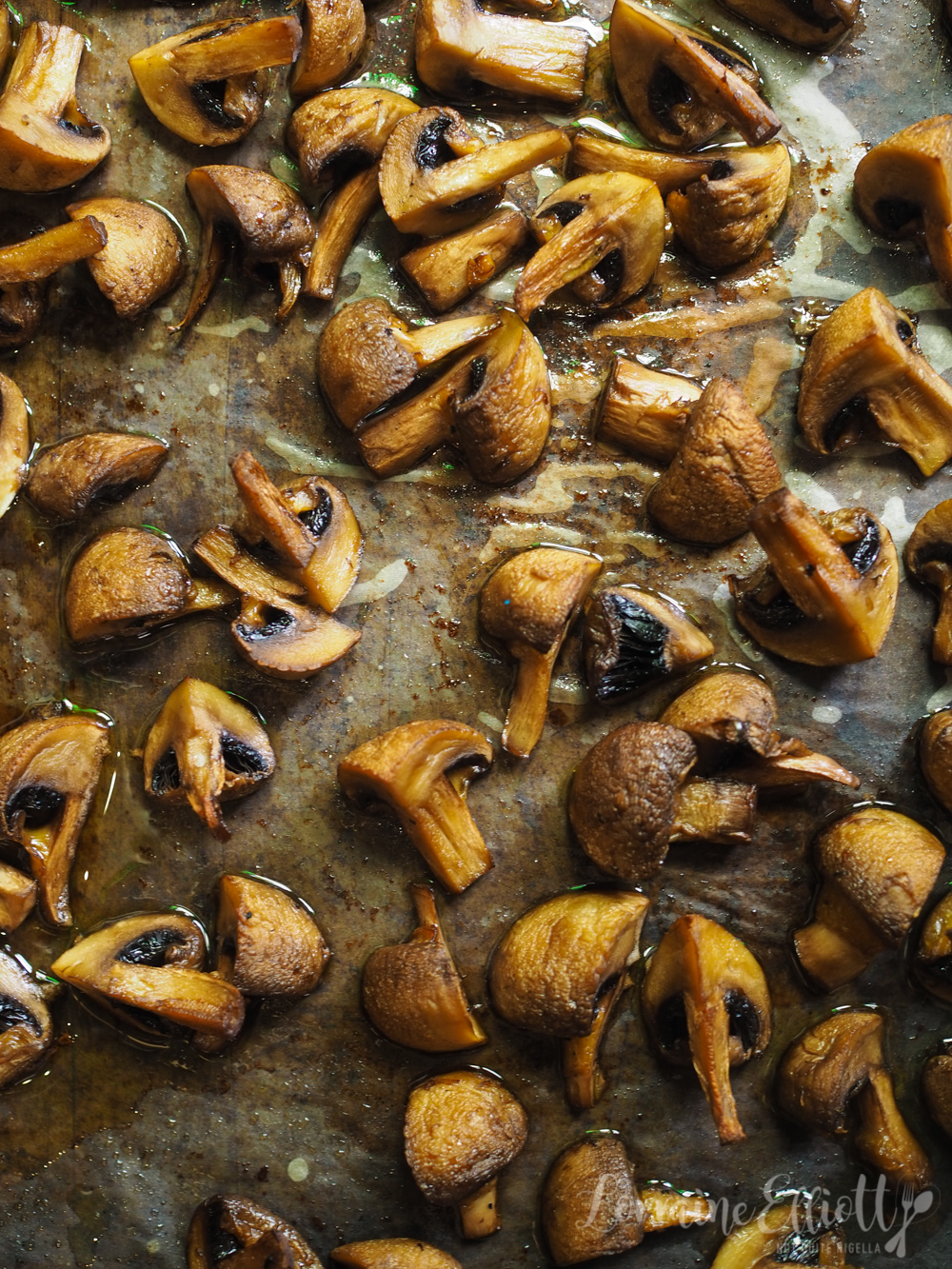 Shrinkage is definitely a thing!

Step 2 - Set your oven on a low heat (around 100C/212F) and line a baking tray with parchment. Butter the outside of the sourdough slices and press about a tablespoon of grated parmesan in the butter. Fry the bread cheese and butter side down until golden and crisp and then place on the baking tray and keep warm in the oven for a few minutes while you finish of the filling. 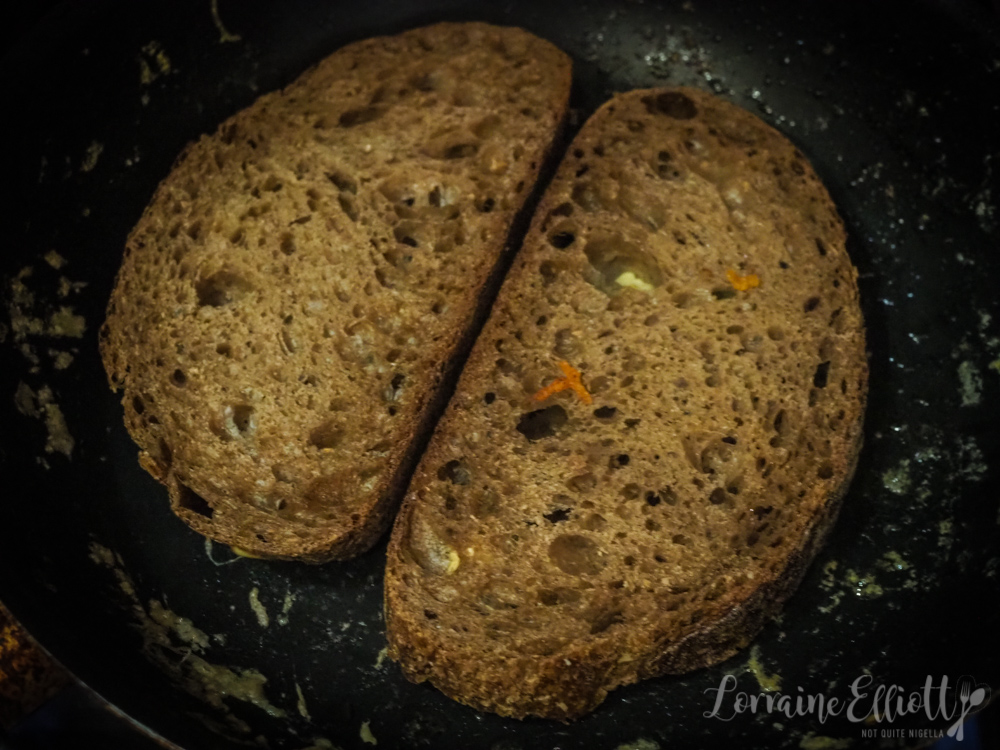 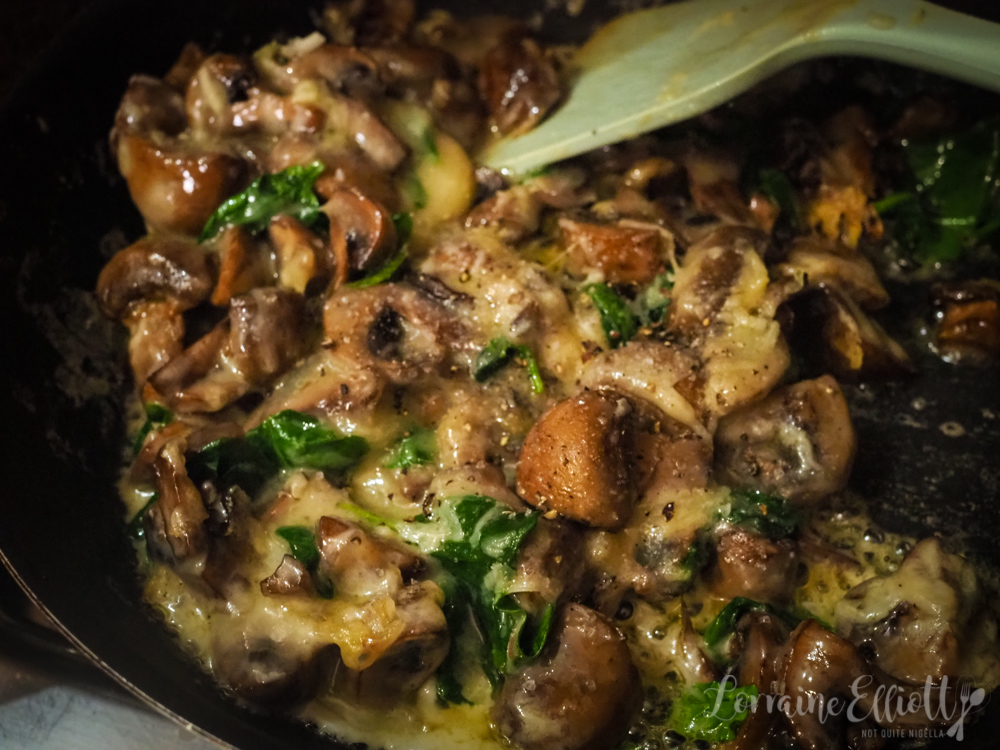 Step 3 - Place the roasted mushrooms into the pan and add the cheeses and spinach and allow the cheese to melt, the spinach to soften and the cheese to crisp up a little. Season generously with salt and pepper. 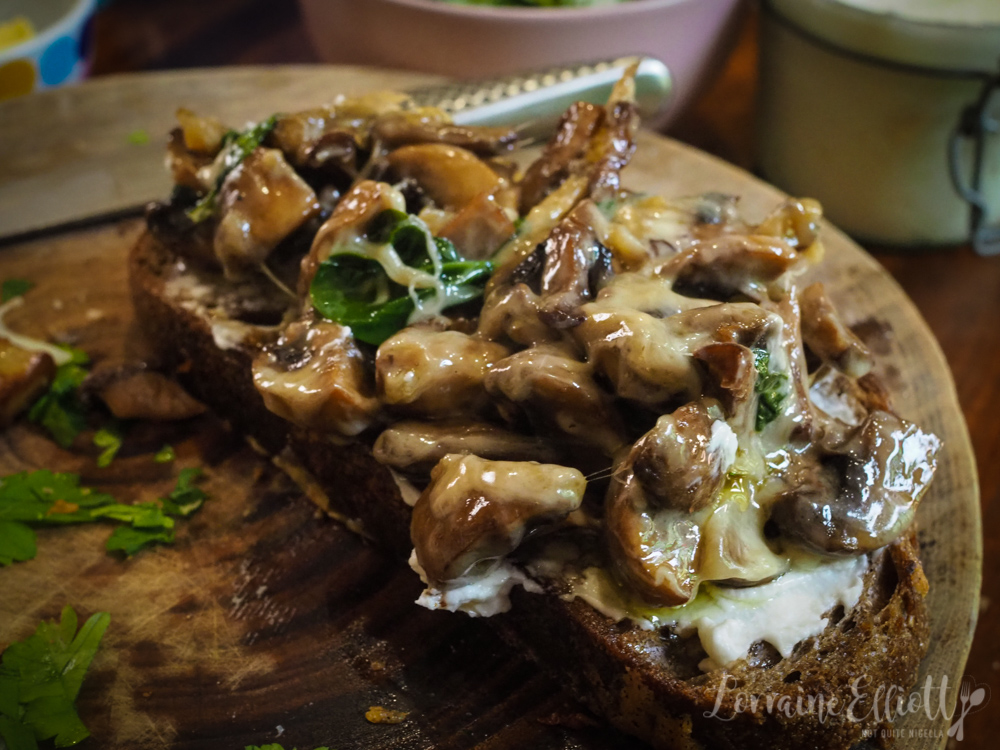 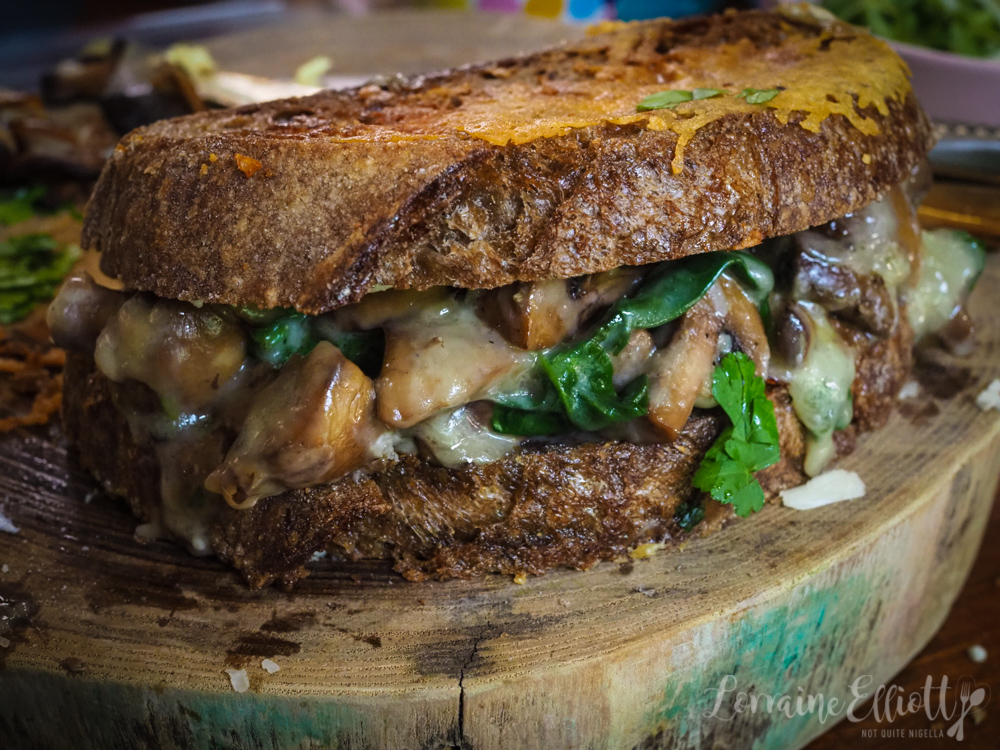 Step 4 - Take a slice of sourdough and spread it thickly with garlic sauce on the non cheesy side (the crispy cheese side will go on the outside). Add a layer of mushrooms and cheese and place the top on with the cheese on the outside. Repeat with the remaining and serve straight away. 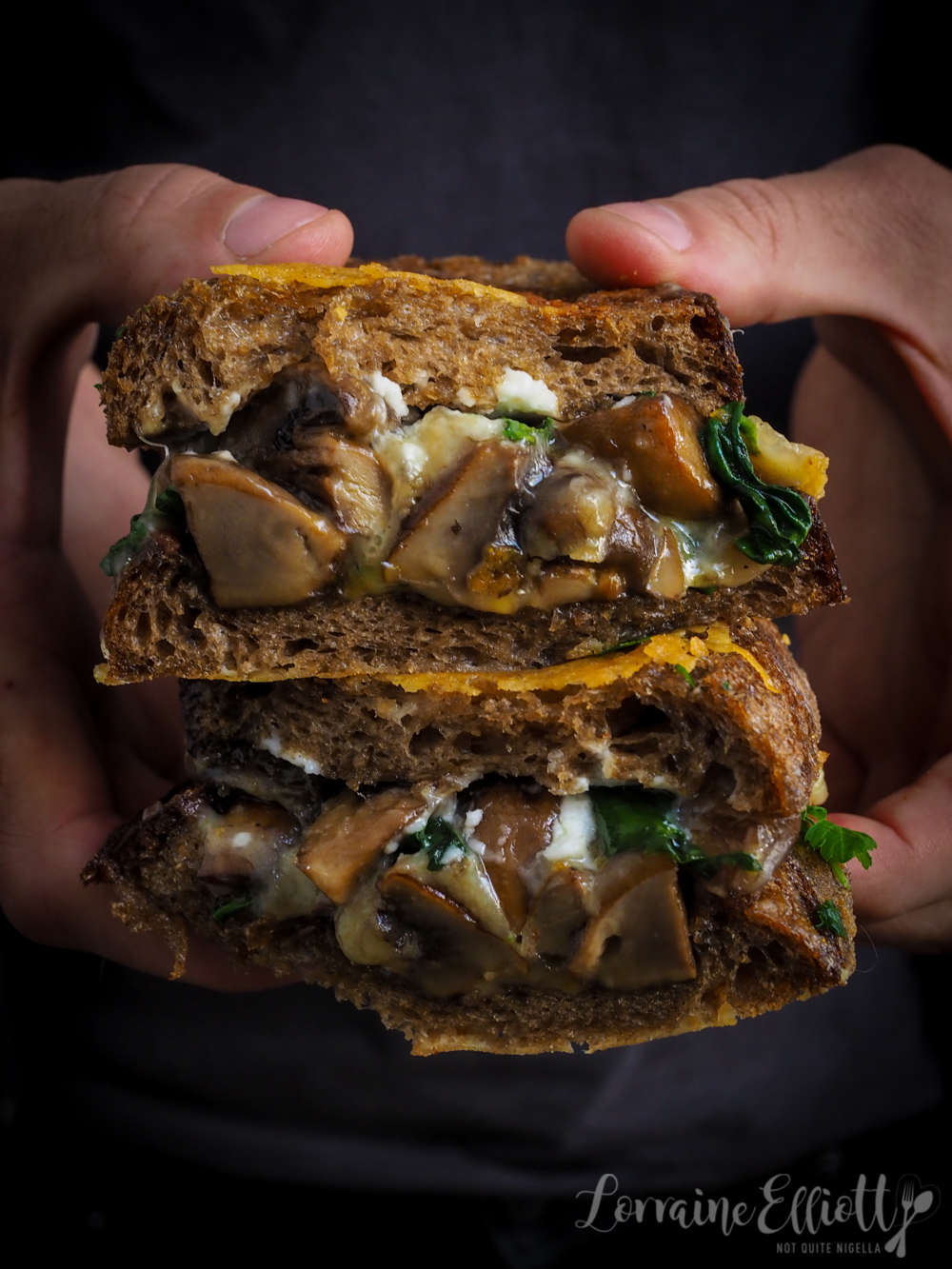